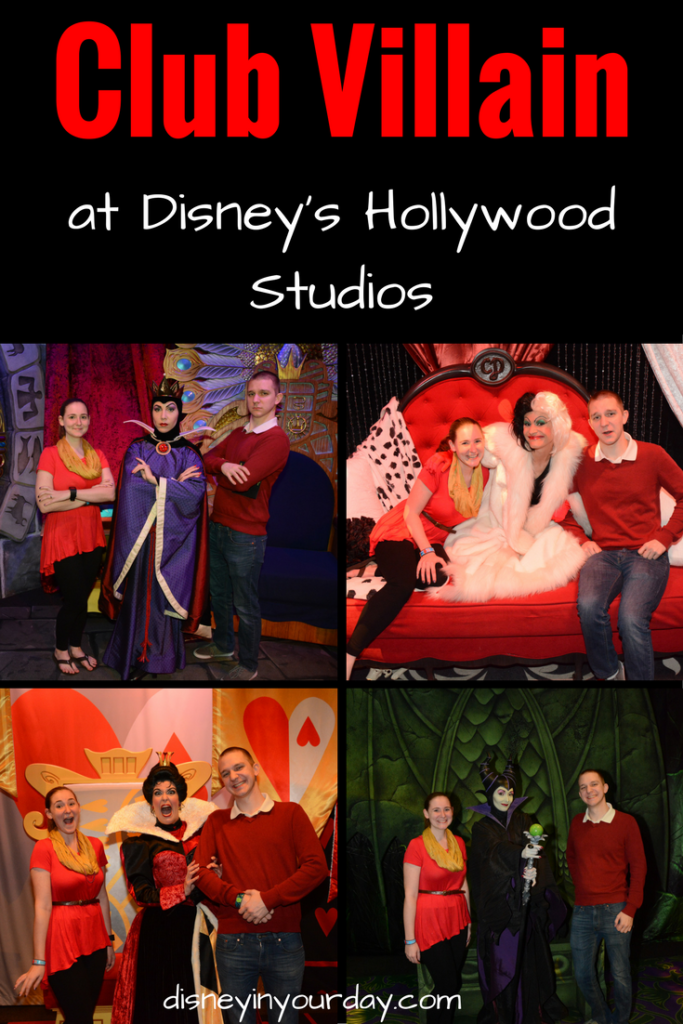 If you want to attend a special event at Disney that’s different than the everyday theme parks, there are tons of ways to do so now.  They offer all sorts of fireworks dessert parties and special dinners.  But one of the coolest, and most unique events that I’d heard about, is called Club Villain.  It takes place at a backstage venue in Hollywood Studios. 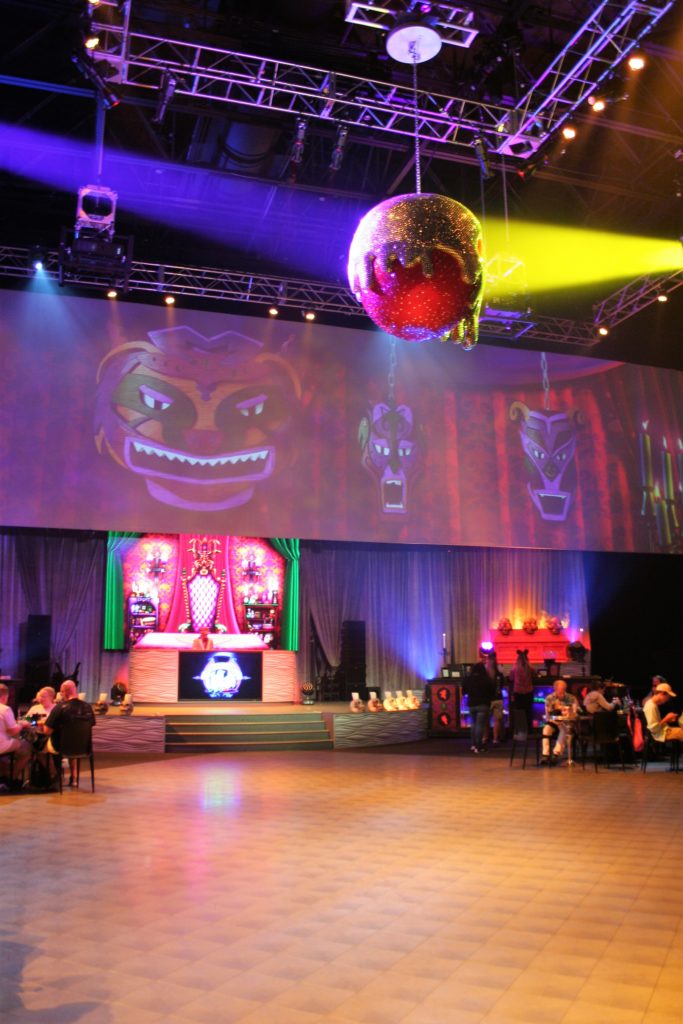 I will preface this blog post by saying that while I did get to attend Club Villain, it was during my trip when I was pretty sick.  So unfortunately I ate almost nothing, didn’t drink at all (besides water), and had to leave the room several times.  From what I saw it was an amazing event and I only wish I had been able to fully enjoy it (especially considering the price tag). 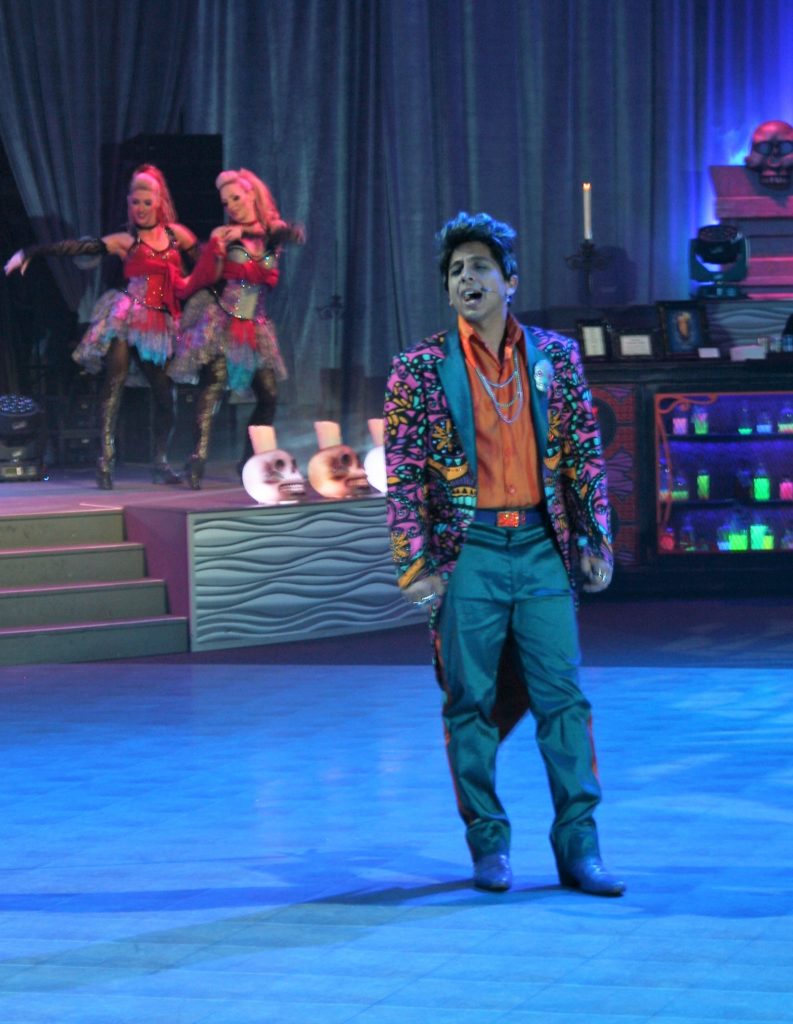 One of things that made this even really unique and different from others is that it had a great entertainment portion to it.  There was a DJ playing tunes, and all of them were themed appropriately (I Put a Spell on You, Elvis’ Trouble, etc.).  While Dr. Facilier was the “host,” we also had an MC who performed a number of live songs.  His voice was killer, I was so impressed.  There were also a couple of talented back-up dancers.  In addition to the performances they had a dance floor and music so you could dance if you wanted to.  Not very many people did but there were a couple of songs that got some out on the dance floor! 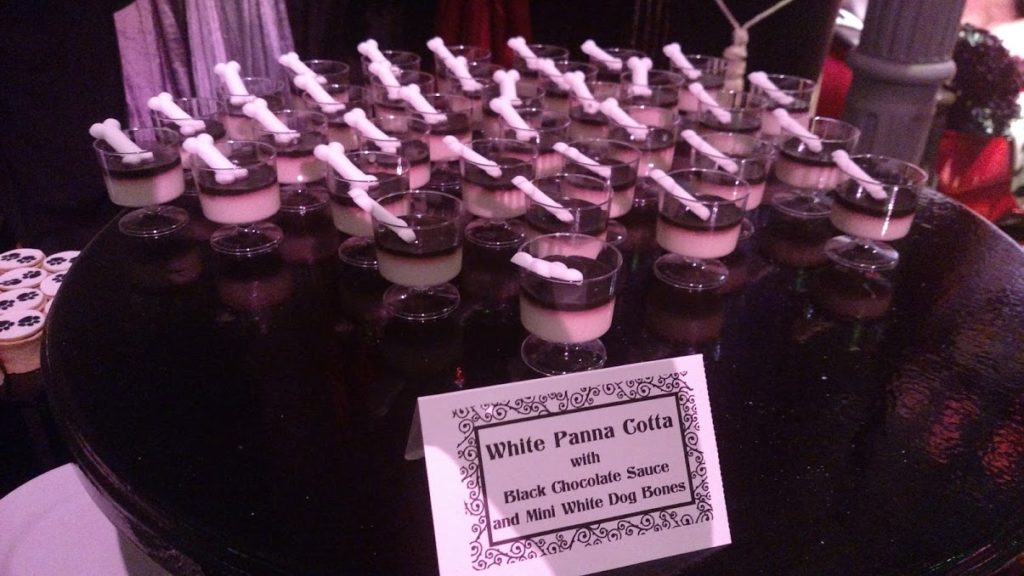 As I mentioned, I ate very little and drank only water.  They had a buffet set up with a number of different options – most New Orleans inspired.  I really only tried the dirty rice and the Herb-rubbed Stripoin of beef.  I will say that beef was quite good.  I couldn’t handle too much spicy at that point but the beef actually got some food into me.  The cast members here were so nice too – we had a picky eater or two at the table, plus me, and one woman offered to bring us stuff from the kids menu.  So I was able to eat a couple of chicken nuggets too.

My husband shared his opinion of the food, since he actually ate it: “It’s good quality buffet style food.  It’s not amazing in terms of all the food in Disney, but compared to other buffets it’s a pleasant surprise.”  Some of the other items on the menu included a creamy olenta, shrimp and andouille sausage, Bourbon bread pudding, a kale salad with watermelon vinaigrette, Chicken gumbo, and Voodoo sticky “pig wings”. 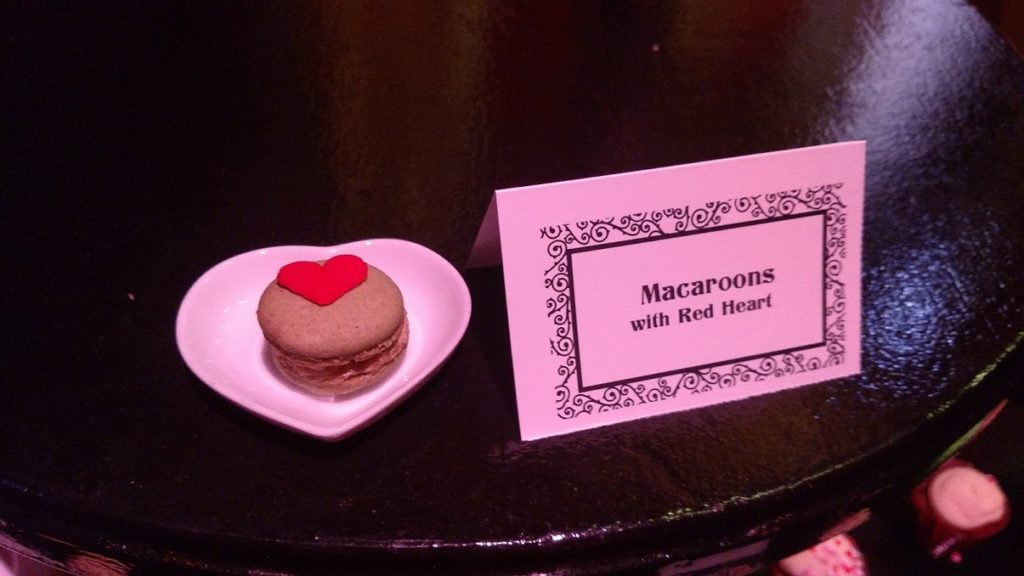 The real highlight of the food was the desserts!  Each of the villains represented at the club had their own dessert table with a few well themed desserts.  For example, the Queen of Hearts had a heart macaron, Cruella DeVil had a pawprint pastry, the Evil Queen had a green apple mousse, and Maleficent had an angel food cake cupcake with chocolate horns.  The desserts were what I ate the most of. 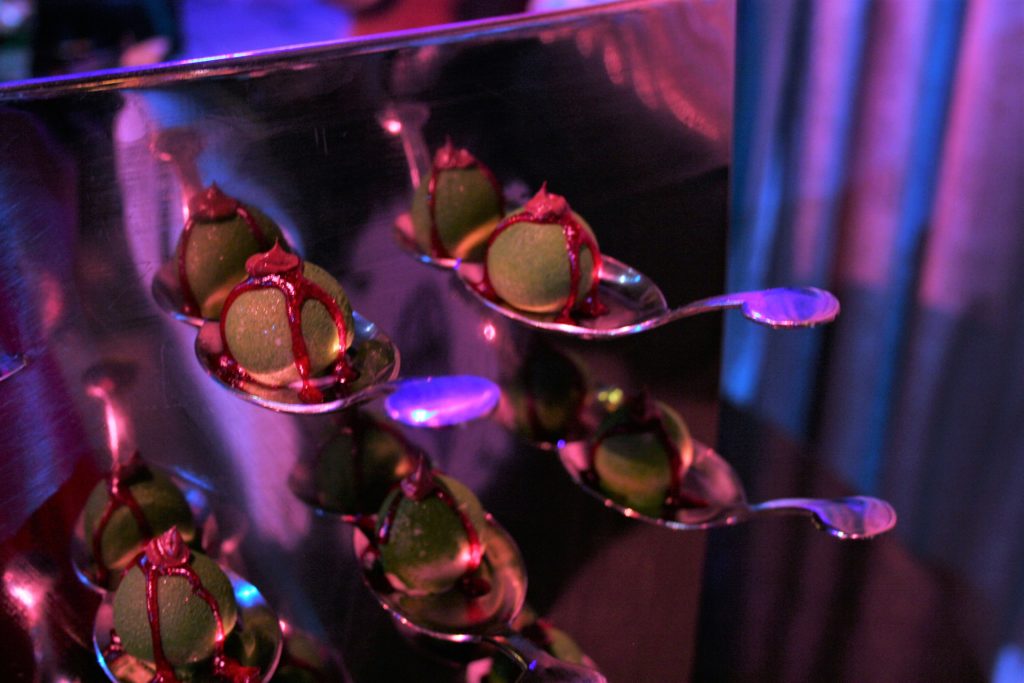 If you really want to get your money’s worth, an open bar was available.  In addition to some standard beer/wine options (as well as soda and water), each villain had a special drink themed after them.  The Cursed Violet, which I did try a sip of, was surprisingly refreshing.  The most popular drink of the evening was the Queen of Heart’s sangria – from the sip I tried, it was pretty strong for a sangria!  The strongest drink was definitely the Poisoned apple, which was a combination of fireball whisky and hard cider.  No one at the table got through a whole glass of it before switching to a different drink.  The Devious Dalmatian was more of a “dessert drink” according to my friends – it was very sweet with white chocolate liqueur.  I’ll be honest, the drinks are why I hope Disney extends this event again and I can go back – I want to enjoy these tasty sounding beverages! 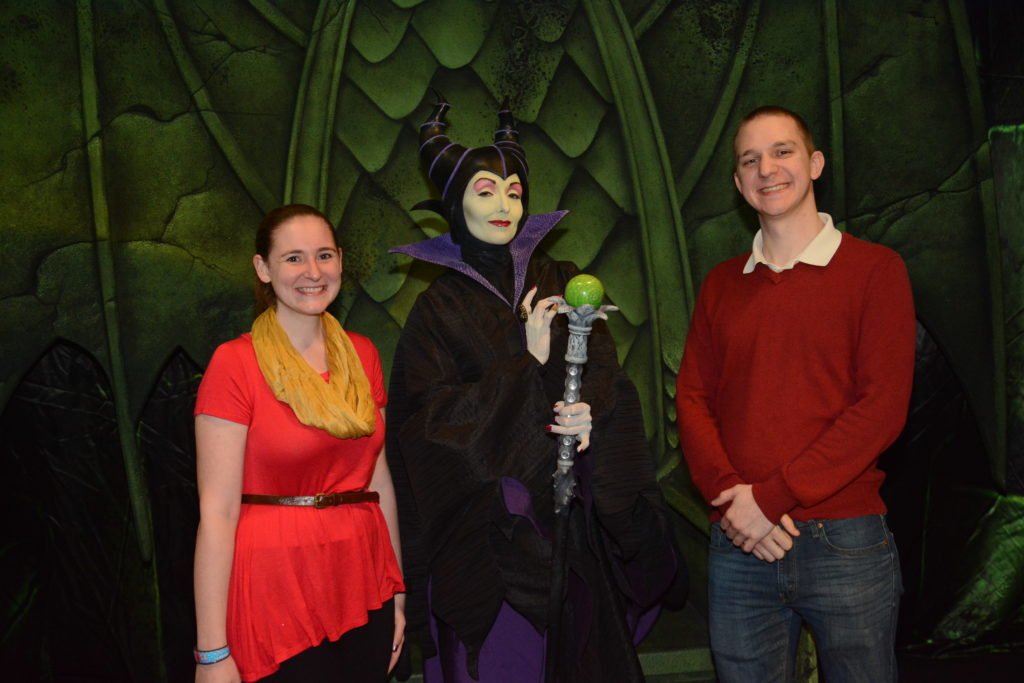 Of course, Club Villain is nothing without the villains!  Though Dr. Facilier hosts, he’s not a character you can actually meet there and take pictures with.  But 4 other villains are, and they are not people you can normally see around the theme parks.  So the chance to interact with them and get photos is a rare opportunity.  Disney has organized it really well too – you get assigned times to meet the characters.  So we were given 8:45pm to meet Maleficent and Cruella, and 9:50pm to meet the Queen of Hearts and the Evil Queen. 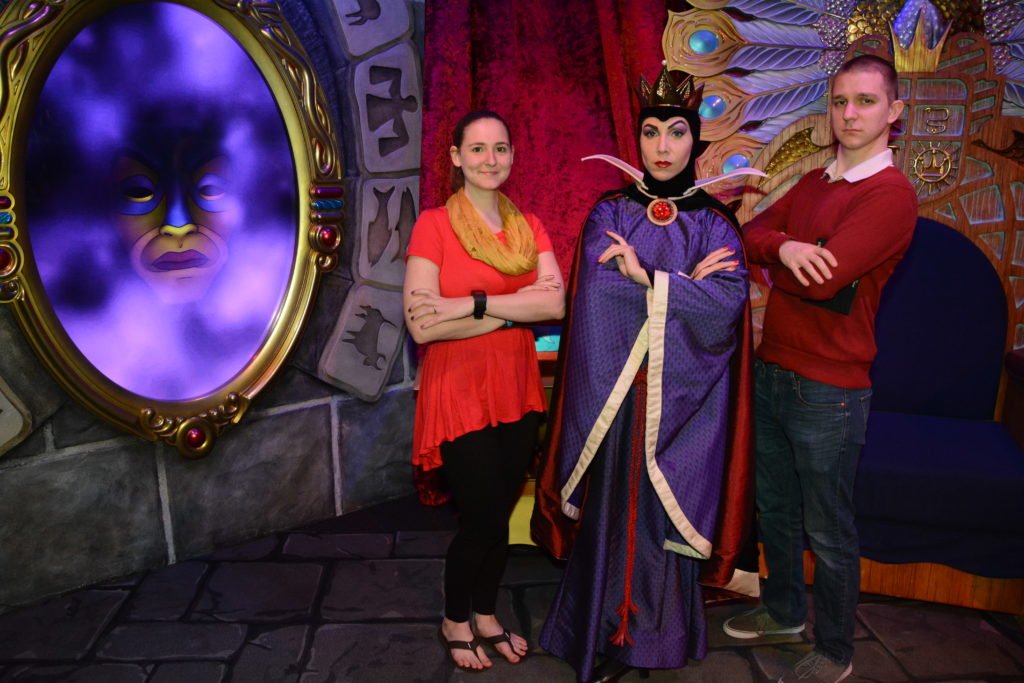 These were some of the best character interactions.  Maleficent and the Evil Queen were both very in character.  They didn’t smile, didn’t say much, but looked very intimidating.  And Cruella and the Queen were a blast.  Cruella was absolutely insane, just like she should be.  She spent a good bit of time with each group, and she had this epic couch to sit on for the photos.  She and I talked about ganging up on Jason because he wasn’t evil enough. 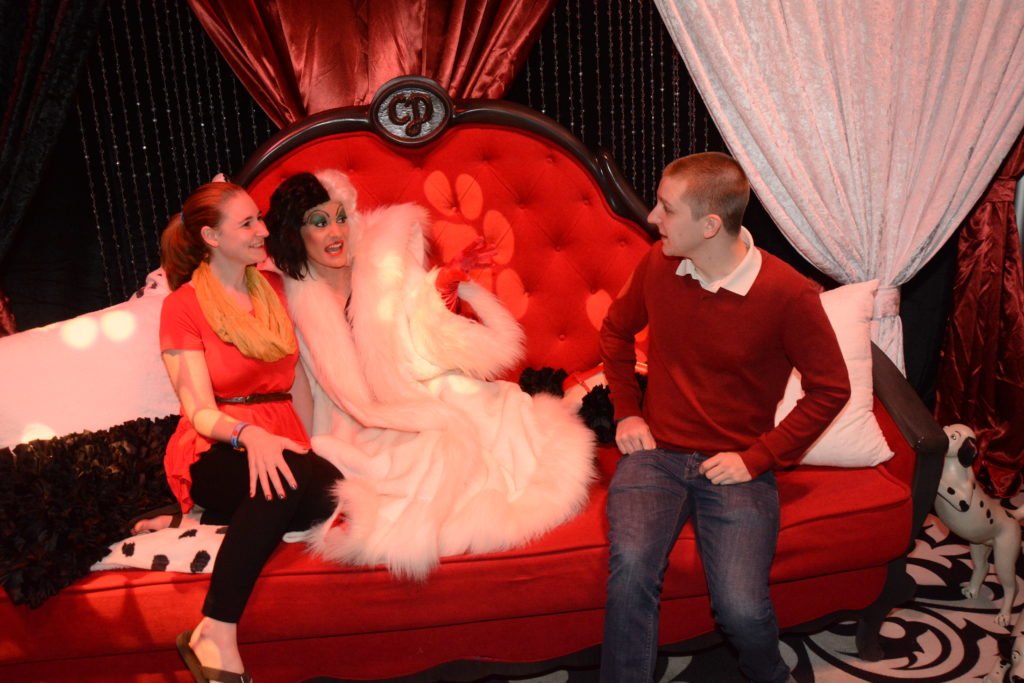 the Queen of Hearts was also crazy in her own right.  I’d actually met the Queen at the Tower of Terror 10 miler, but at that point she was a covered character, not a face character.  So being able to actually talk to her was really cool.  She noticed my Gaston-inspired outfit and said those colors better be representing her and not that “gassy-man.”  I lied and assured her that they were. 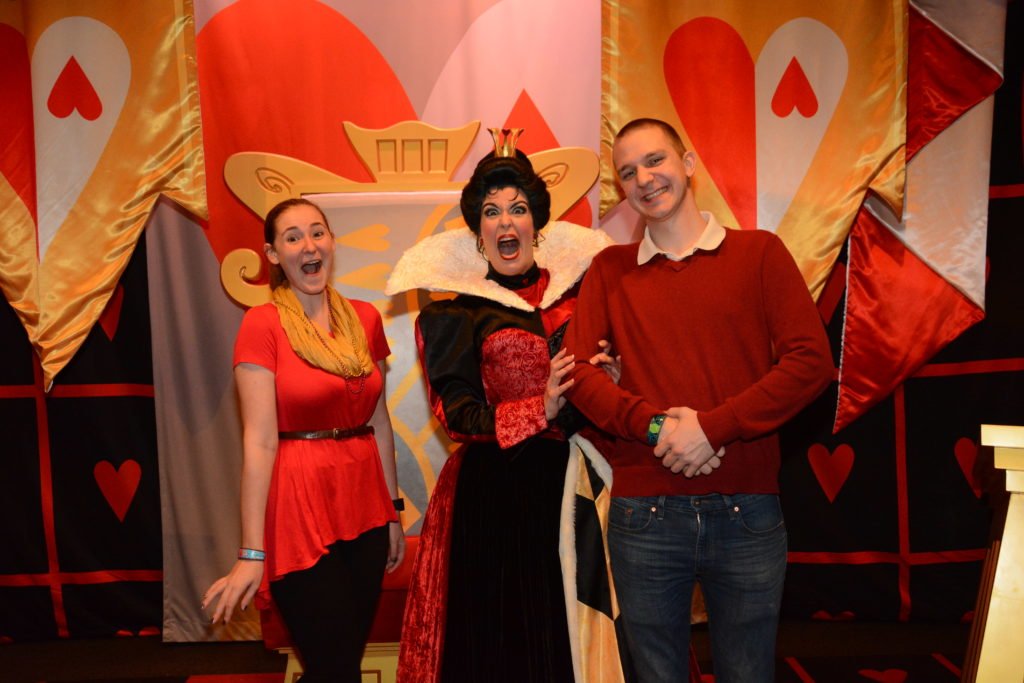 All in all Club Villain was a really well put together, organized event that has some really unique opportunities.  Right now they haven’t extended it past January but I really hope they do, as I would go back.  It was being held Friday evenings, both at 5:45pm and 8:15pm.  The cost was $129 to attend.  It’s steep but I think it’s worth it if you’re a big Disney fan and into the villains.  You’re getting the entertainment/music, rare characters, dinner, dessert, and an open bar for a couple of hours for that price.

What do you think of Club Villain?  Which villain would you most want to meet?