You are here: Home / Disney World / Brunch at California Grill 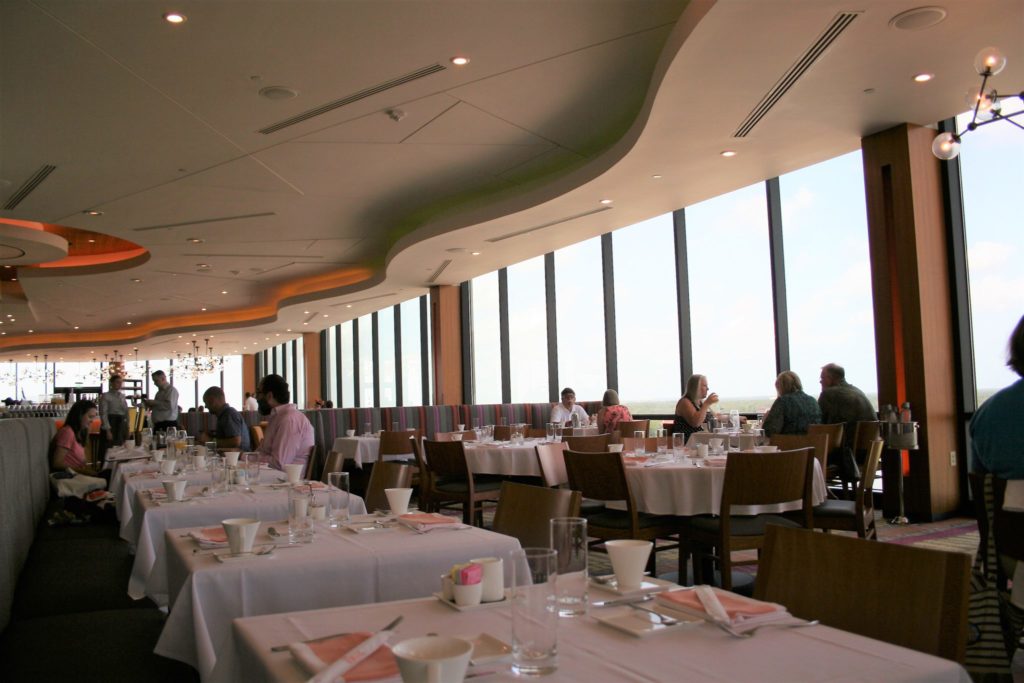 California Grill is a signature restaurant at the Contemporary resort that is normally only open for dinner, but brunch is now available every Sunday.  It’s definitely a signature experience as its costs $80 per person.  The restaurant is located on the top floor of the resort and has amazing views of the Magic Kingdom.  We had only been once before and timed it with the fireworks, so we’d only seen the views in the dark.  That is lovely, but it is so stunning in the sunny daylight as well.  We spent some time on the deck to take in the views, but even just from our table it was so lovely. 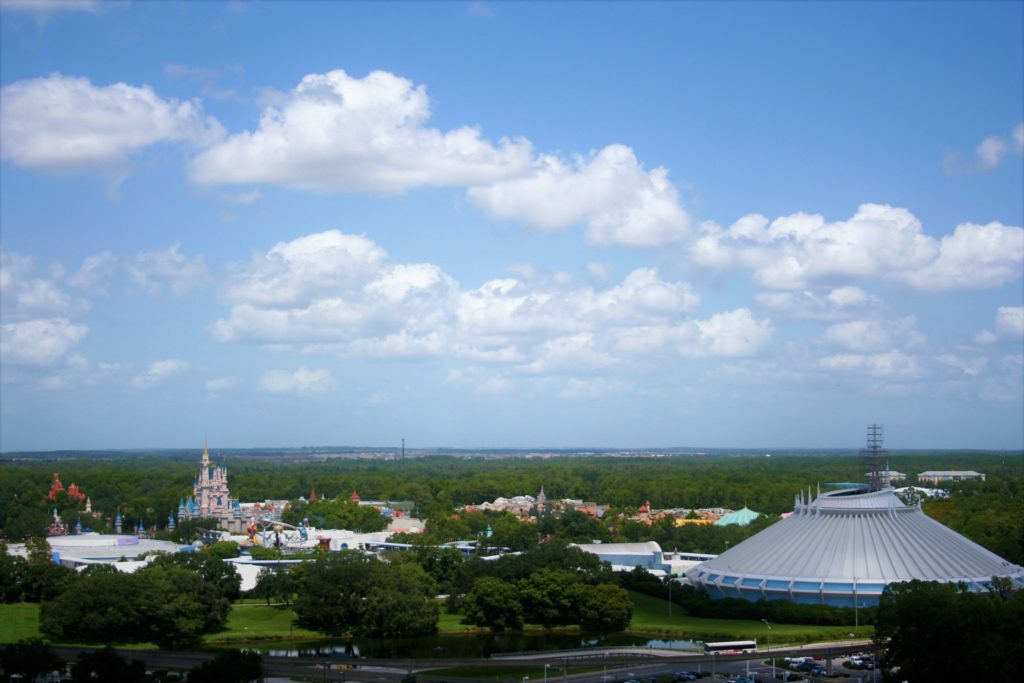 Speaking of the atmosphere, they step it up yet another notch by having live musicians in the room playing.  There was a keyboard player and bass player, who did lovely instrumental versions of Disney songs.  I managed to grab some video of them playing a gorgeous version of I See the Light from Tangled. 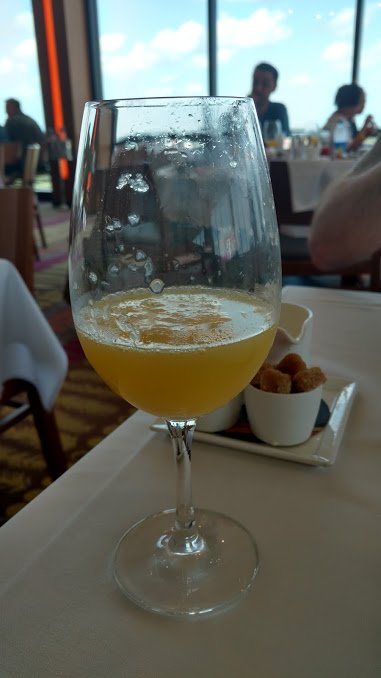 The brunch includes complimentary mimosas (you can also pay for a bloody mary bar).  They handed us them as soon as we walked in, and our server was wonderful about making sure we had mimosas at the ready!  I think I may have had about 4 or 5 throughout the meal.  Gotta make that money worth it!  I got a coffee as well and they brought a big pressed pot of it for me.  It was really good coffee.

The Brunch at California Grill:

Brunch is three courses – appetizers, entree, and dessert.  Originally I had read online that you also started with a basket of pastries, but we didn’t receive those.  It definitely didn’t matter as there was more than enough food!  The appetizer portion of the meal is done as a buffet, so you can take what you like and however much of it as you like.  There were tons of items on the buffet – I had to be careful not to eat too much so I would still have room for the other courses! 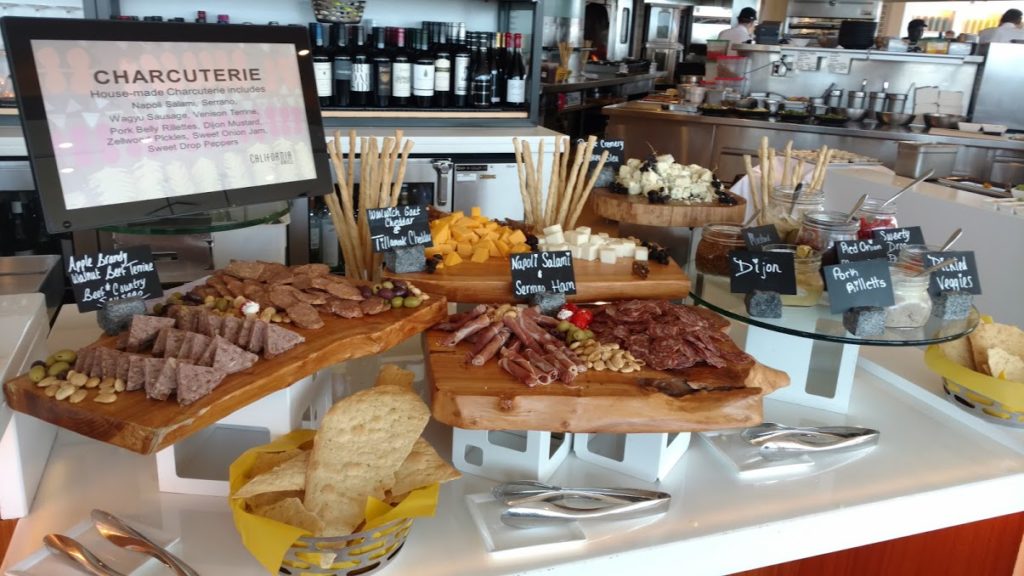 There was a nice charcuterie section with a variety of meats, cheeses, and crackers, plus sauces and spreads.  And as California Grill is known for their sushi, there was some of that as well, which made us very happy!  They had a California roll with crab meat, salmon and tuna nigiri, a shrimp tempura, and a spicy tuna roll.  I had at least one of each. 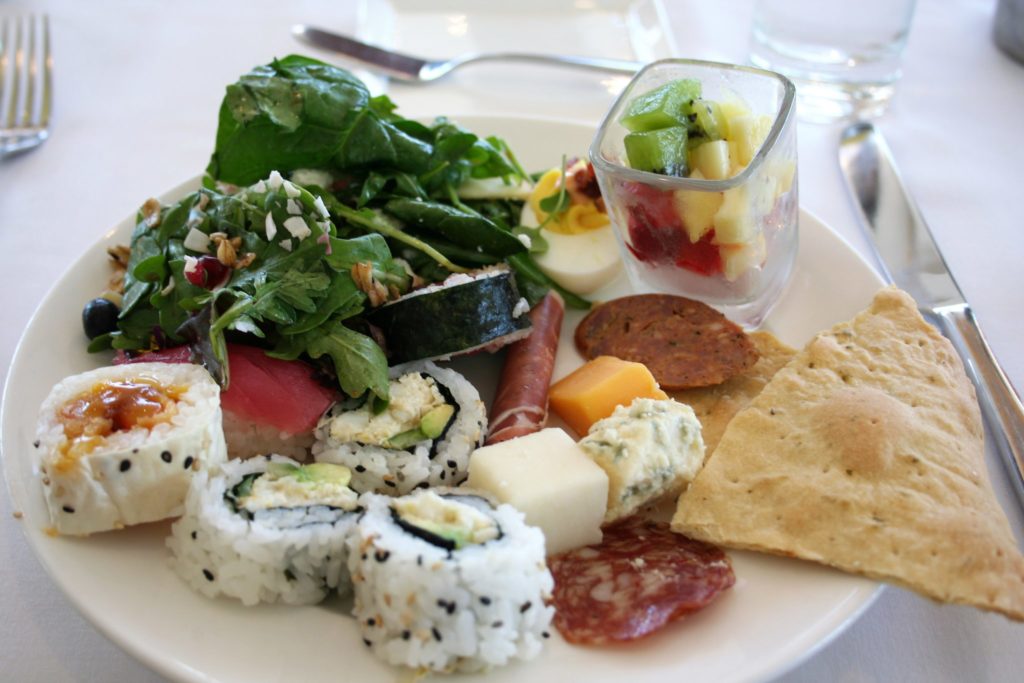 There was also a variety of salads – I normally pass on salads on the buffet because they’re pretty generic, but these were actually really delicious.  They had some unique ones.  There was a Caesar salad, but also one with pomegranate seeds and a pear salad.  Finally they had deviled eggs, little fruit cups, and a yogurt station where you could get Greek yogurt and a variety of different toppings for it.

For the entree you could order one item off the menu, and it was hard to choose because everything sounded really good.  I went with the lobster eggs benedict (which might sound familiar if you read my Narcoossee’s brunch review.  I guess I just can’t resist a lobster eggs benedict!).  It was really delicious.  There were very large pieces of lobster meat.  I preferred the thinner English muffin this was on because it made the dish feel a little lighter than the heavy biscuit at Narcoossee’s, though Narcoossee’s had a better hollandaise since theirs had a citrus flavor to it. 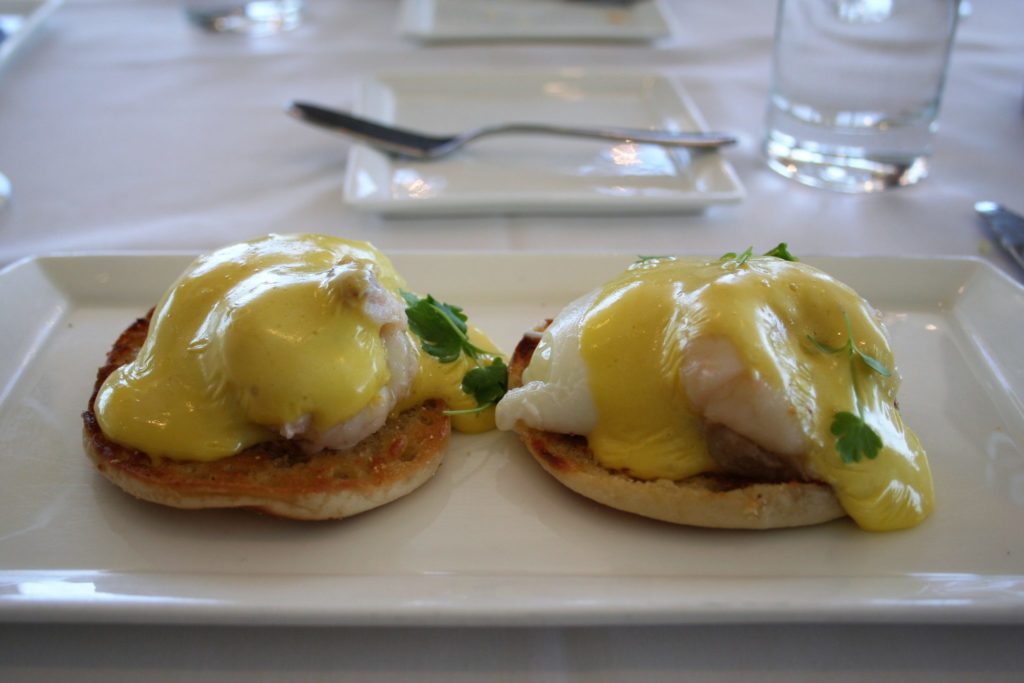 Jason went with the steak and eggs, which was a grilled hangar steak with Two Eggs Any-style, Chimichurri, Marble Potato Hash, Charred Red Onion.  It was a pretty good steak, but he was more impressed with the buffet.  It’s hard to compete with charcuterie and sushi. 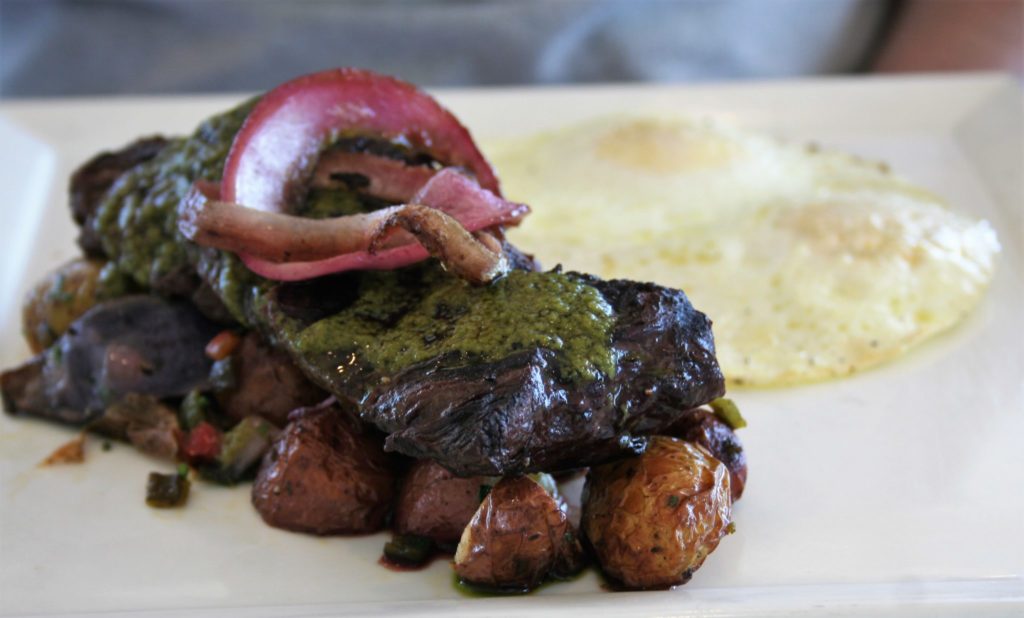 For dessert we got a sampler plate to share.  We were really only able to take a bite or two of each item just to try them, because we were so stuffed.  There were two macarons, a lemon and a coffee flavored one.  I love maracons.  Then there was an almond cake with blueberries, as well as fig cookies.  I really enjoyed the cookies.  Also a couple of different chocolate truffles and chocolate bark. 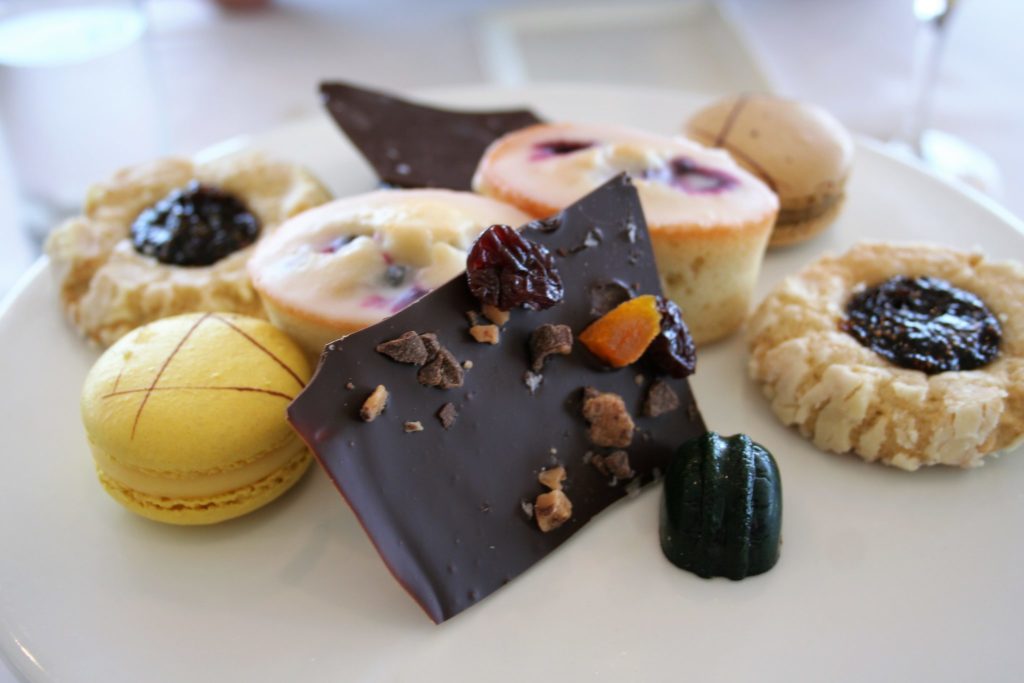 After enjoying our meal we wandered out onto the deck to take in the views.  By dining at California Grill for brunch you also have the opportunity to come back in the evening for fireworks viewing out on the observation deck – you just need to show your receipt from brunch to return for the view.  Unfortunately our flight was heading back to Philly that evening so we wouldn’t be around for the fireworks!  But it’s another nice perk that you get from the brunch.

I’m not going to lie, this was a really, really expensive brunch.  I think we paid more for brunch than we would have if we’d just had dinner here.  But the food was really good and it was a wonderful experience.  I wouldn’t be able to go back often, but I would do it for a special occasion.  The food was excellent and it was just a lovely way to spend a Sunday morning.  We went around 11am, so it was nice to spend an hour or two in Magic Kingdom and then hop over to take a break before tackling some more theme parks in the afternoon.

Would you try brunch at California Grill?  What item looks most appealing to you?