You are here: Home / At Home / A Fairy Tale Inspired Murder Mystery Party 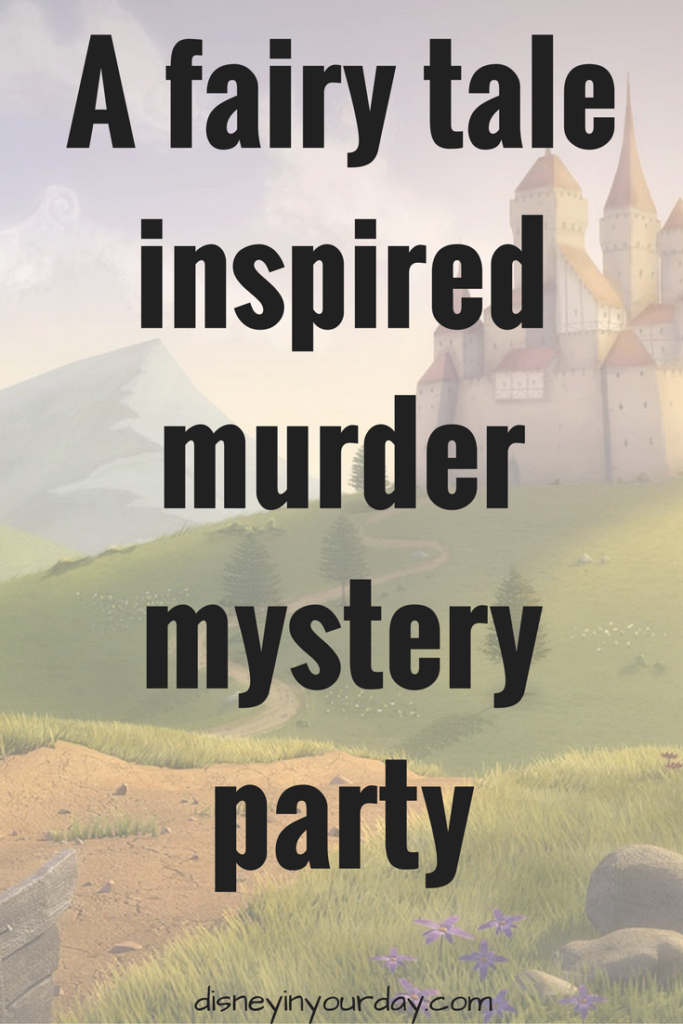 While it’s not strictly Disney related, about a year ago I threw a murder mystery party that had a fairy tale theme – and I feel like that’s something that Disney fans might be interested in!  You could very easily add a lot of details to make it Disney-oriented, even if the mystery itself isn’t from Disney.

I had hosted a number of murder mystery parties with different themes before, but I was especially excited about this one.  It is called Once upon a Murder, and it’s a downloadable party from Night of Mystery.  You can print everything right from your computer that you’ll need, and depending on which version you purchase it can hold anywhere from 8-80 guests.  We got the version for 8-12 people, and had 12 at our party.

If you’re not familiar with a murder mystery party, or if you’re curious about this brand, here’s how it works: everyone is assigned a character, and everyone is a suspect for the murder.  In the Night of Mystery versions there are two “acts” – before the murder and after the murder.  Before the murder there is some other little mystery going on that you’re trying to figure out, and when that’s done one of the party guests will actually become the victim!  Then the second half is about figuring out who the murderer is.  Each guest has a sheet of information for each act with stuff they’re trying to find out from others.  They also have an information sheet for their own character with many things the others won’t know.  Paper money is also involved in this game, and you can use your money to try and bribe people for information.

Once upon a Murder includes favorite Disney characters such as Snow White, Prince Charming, Rapunzel, Aladdin, and Belle and the Beast.  There’s also other fairy tale characters like Hansel and Gretel, Little Red Riding Hood, and Rumplestiltskin.  One of the most fun parts of the mystery is dressing up and getting into character!  If you’re hosting, it’s also a lot of fun to decorate your place, and make it look like a castle.  Planning themed food can be fun too, as well as awarding prizes to “best sleuth,” “best actor,” and “best costume.”  The kit that you purchase has decoration and menu ideas, as well as printables to help you decorate.

Overall the Night of Mystery company is probably the best one we’ve used, and we’ll be using them again next month for a Wild West themed mystery night!  For Disney fans, you can’t beat the fairy tale theme.  Highly recommended!  Many people love to do them around Halloween, but they’re really great for any time of the year 🙂

Have you ever participated in a murder mystery party?  What do you think of this one?