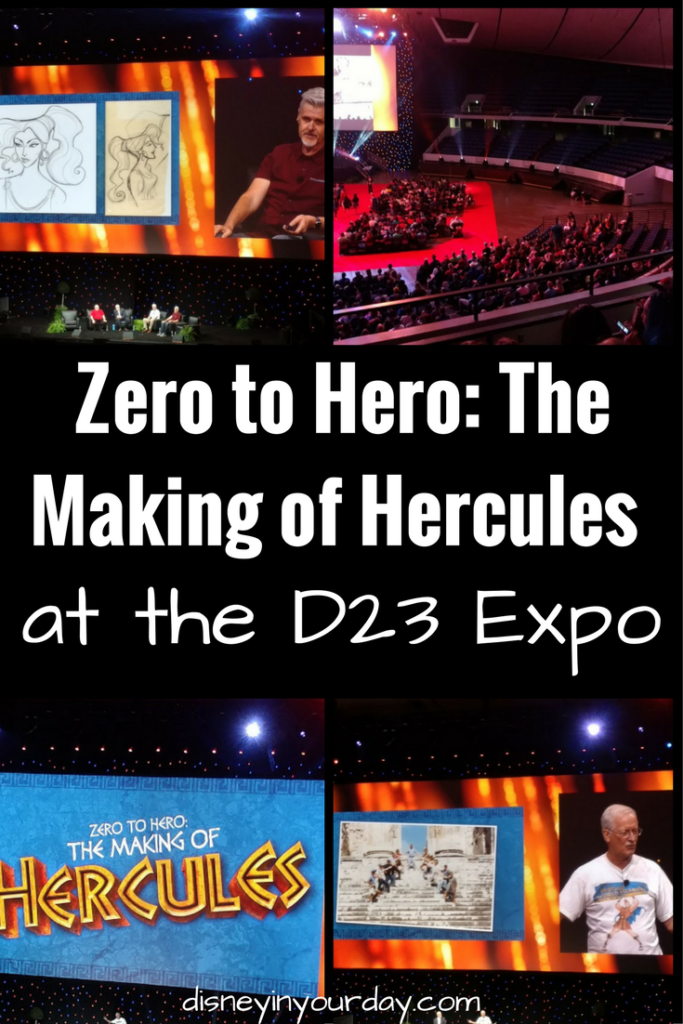 My trip to the D23 Expo this past July was certainly overwhelming.  There were lots of panels I didn’t get into that I wanted to do.  However, some of the smaller ones turned out to be the best experiences!  One of the very interesting ones I attended was Zero to Hero: the making of Hercules.  I enjoy the movie but didn’t know much about the “backstory” of how it was made or any behind the scenes details, so I learned plenty here.

The team of “Ron and John” led the panel.  That would be Ron Musker and John Clements, who have co-directed a number of animated Disney films, including The Little Mermaid, Aladdin, Hercules, The Princess and the Frog, and Moana.  It’s interesting to watch them interact and talk together.

They started out with a really funny story about the narration done by Charlton Heston at the beginning of the film, while introducing the muses.  The narration was supposed to end with the phrase “you go, girl.”  However, Heston thought saying “There you go, young lady” would be a more appropriate choice, and initially recorded it with that phrase.  After a couple of takes they convinced him to say “you go, girl,” and of course that is what ultimately ended up in the film. 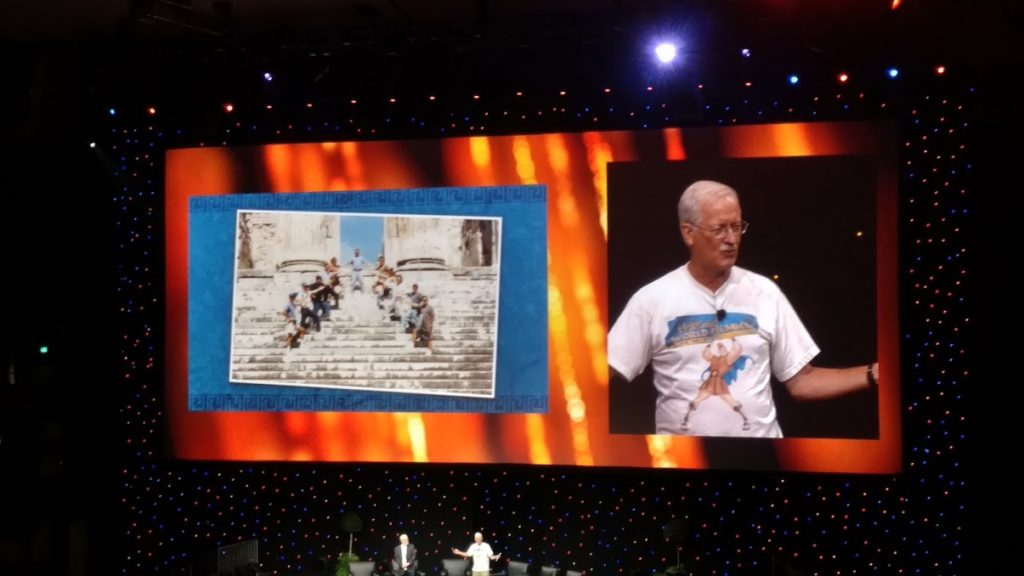 They shared some photos from their trip to Greece to do research, and talked a lot about the animation done in the film and different styles that they experimented with.  For instance, originally Megara was much too realistic looking, so they had to make some adjustments to get a more “Disney” look to her.  Ken Duncan, who was the animator for Meg, was there to talk a lot about his approaches to Meg’s look. 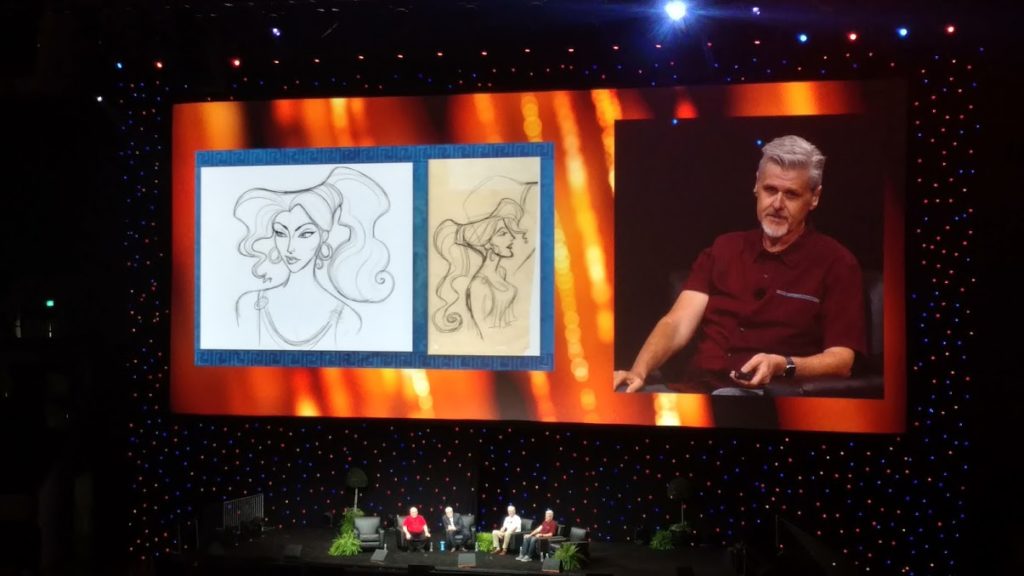 They also discussed how they would use live actors to “act out” some of the scenes they needed to animate, so they could use that footage to influence their drawings.  For a movie like Hercules this could be quite a humorous event.  The live actors who “played” Hercules and Meg were actually in the audience of the panel, and hopefully they were just as amused by some of the footage shown.  Hercules battling the Hydra when there’s actually nothing in the room but a cardboard head is pretty funny, as you can see in the video below.

They also talked about the character of Hades and how much he changed throughout the planning process.  They originally had Jack Nicholson in mind for the part, and Hades would have been a much slower talking, smooth talking villain.  When they landed on James Woods they character switched to a fast talking “used car salesman” type.  Woods ad-libbed a lot of his lines and dialogues, and one of their biggest struggles was getting him to slow down enough so you could actually understand what he was saying.

Eric Goldberg, the animator of Phil, was also present.  It was interesting to hear him discussing how to animate Phil, and how he used Danny DeVito as an influence for his drawings.  One story in particular that he told was about the shape of Phil’s mouth.  He claimed that he watched Danny DeVito talk and his mouth made the exact shape in the photo below.  So he sketched it and used it when Phil was talking in the movie too. 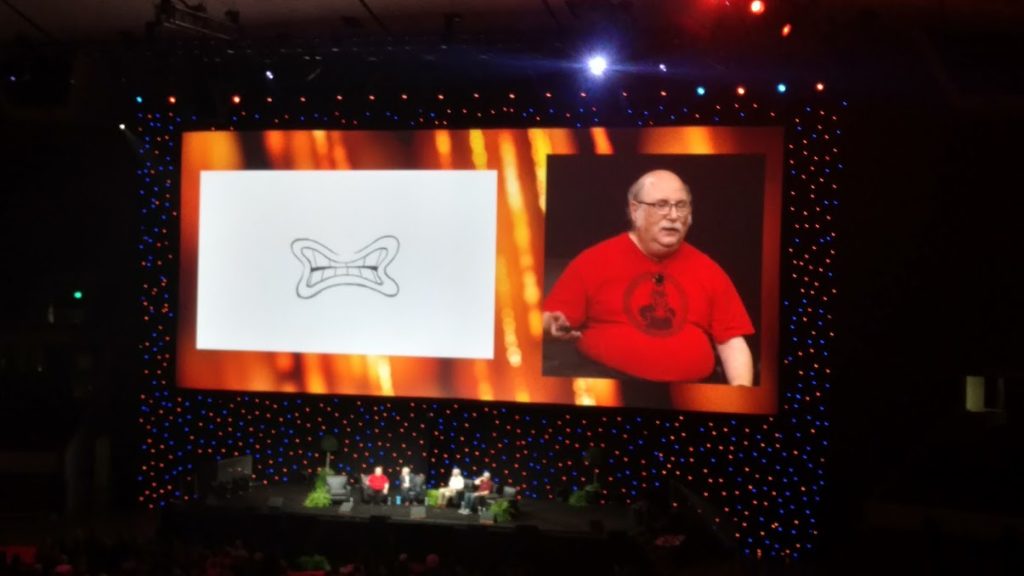 Susan Egan, the voice of Megara, and Tate Donavan, speaking voice of Hercules, then joined the others on stage.  Susan was as charming and funny and talented in person as you’d hope.  She told the story about how she had to beg to audition for Meg.  They didn’t think she would be a good fit for the part.  She was playing Belle on Broadway at the time, and the characters are so different that casting saw her as the wide-eyed, innocent but adventurous Belle.  She insisted to them that Meg was much closer to her real personality and they eventually let her audition.  And of course she proved how versatile she can be!

Tate Donovan was very funny, and perhaps still a little bit bitter about not being able to sing the part of Hercules.  He auditioned for the speaking voice and apparently production didn’t know that he could sing as well (and in fact was in a band).  I’m not sure if they had cast the singing voice before or after Tate showed up, but there was a lot of teasing about them not letting him sing. 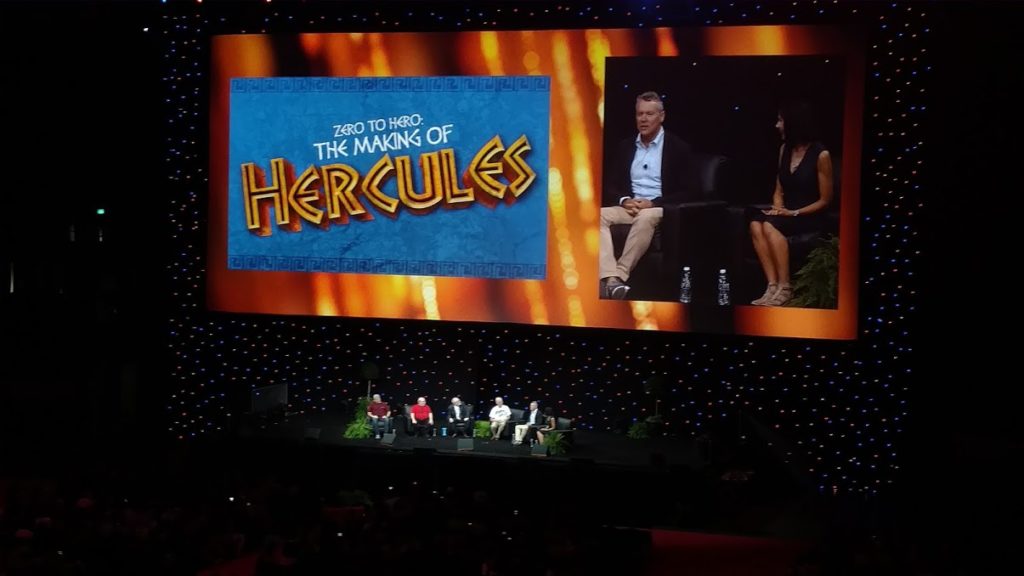 Speaking of singing, they also shared some information about songs that were written for the movie but later cut or replaced.  Before “Go the Distance” they had a different song for Hercules called “Shooting Star.”  They played the full song recording of it with some sketch drawings to accompany it.  I have to admit, I think I actually prefer Shooting Star over Go the Distance.

To end the panel Susan Egan performed I Won’t Say I’m in Love live.  They had the background music and back-up vocals, as well as the animation on the screen timed to her singing.  Such an amazing experience to hear her live, she is so talented!  Definitely one of the highlights of the expo was hearing this performance.

What’s your favorite “fun fact” that we learned at Zero to Hero: the Making of Hercules?