You are here: Home / At Home / Wreck-It Ralph and Vanellope Halloween costumes 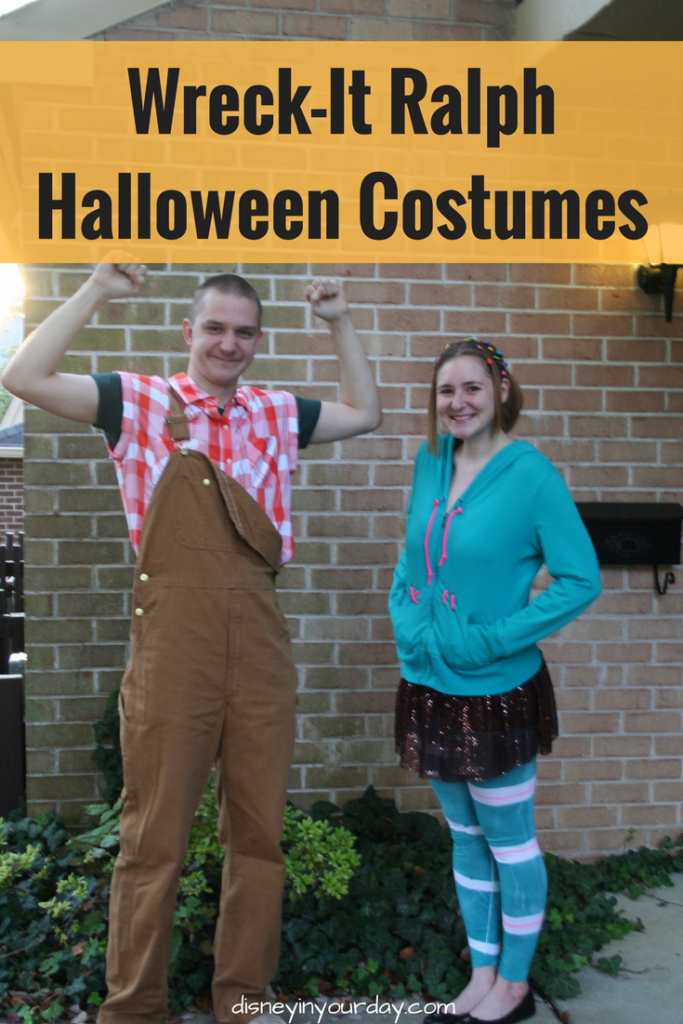 I shared earlier this month about the Halloween costumes that Jason and I did for this year – Joy and Fear from Inside Out.  Since we attended Mickey’s Not So Scary Halloween Party in September we were able to use our costumes early enough to get photos so I could blog about them this year.  But last year we didn’t wear our costumes until it was actually Halloween, so I figured I would save the blog post about them for this year when it’s more relevant!

Wreck-It Ralph is one of Jason’s favorite Disney movies, and one that I enjoy a lot as well, so it seemed like a fun idea to put together some Wreck-It Ralph costumes!  With the sequel to the movie coming out soon I’d guess we’ll only see more Ralphs, Vanellopes, and Felixes for Halloween next year.

It always seems like my costumes are easier to put together than Jason’s, but this year it was definitely reversed.  A lot of work went into my costume, while Jason’s was pretty easy to put together.  If you’re interested in our own Ralph and Vanellope costumes, here’s how we did it!

How we made our Wreck-It Ralph costumes: 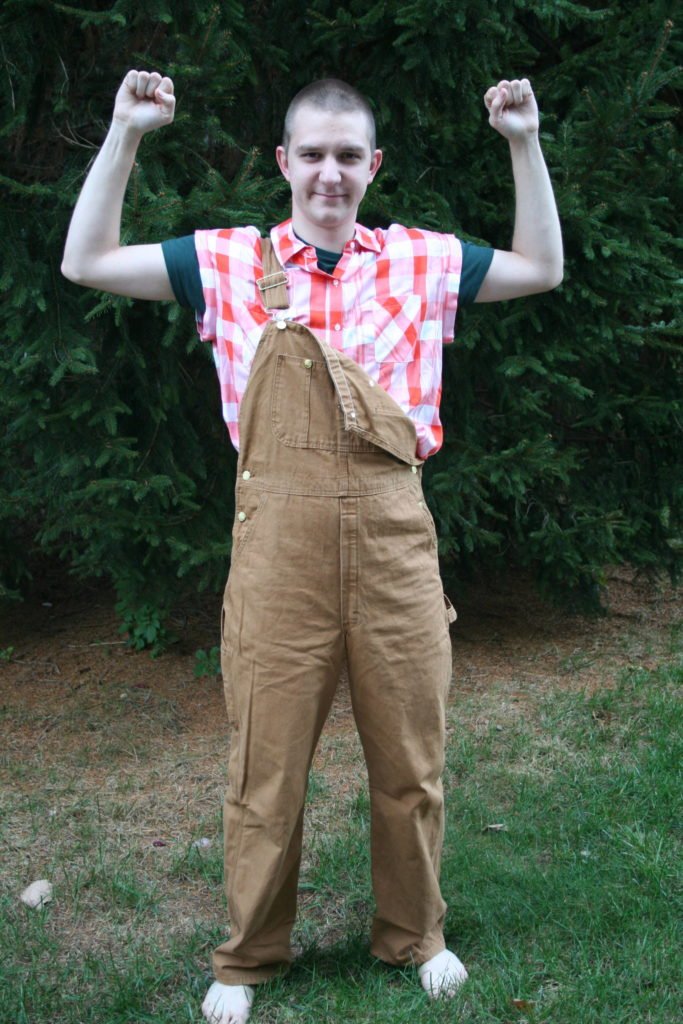 Ralph’s got it pretty easy – he wears a shirt and overalls, basically.  The shirt is kind of a reddish checked shirt, so anything similar to that would work.  I kept an eye out in a few places, including Goodwill, but I actually found this one at K-mart.  And yes, it was  woman’s shirt.  The colors and style seem to be more in for women right now.  It seems every Halloween costume Jason wears involves some sort of women’s clothing – my purple pants for Fear, women’s boots for Flynn Rider, this shirt…

If you look closely at pictures of Ralph he has a few buttons undone and a sort of greenish teal colored shirt underneath.  Jason already happened to have a t-shirt similar to that color so he just wore that.

The overalls were the trickiest thing to find because men don’t really wear them and women’s ones would be too short for Jason.  Plus most overalls you find are jean overalls.  Luckily like most things that are difficult to find it was Amazon to the rescue.  It wasn’t the perfect shade of brown, a little light, but they were a decent prize and the right size.  Put it all together and you’ve got Ralph! 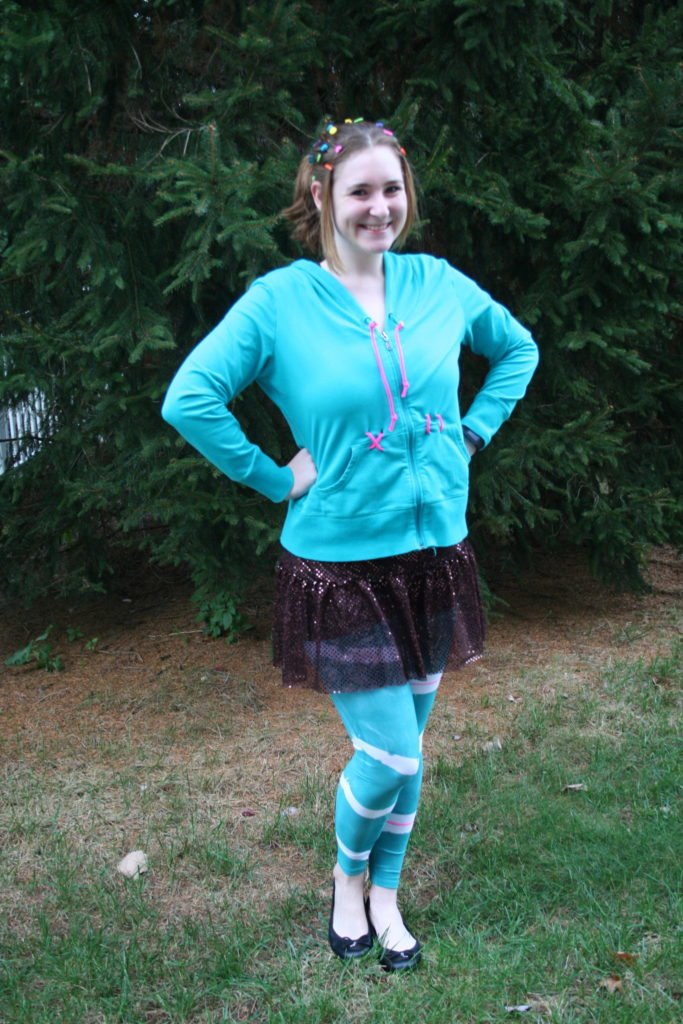 My costume required a bit more DIY and craftiness.  There are lots of bits and pieces that go into Vanellope’s look.  I started with the leggings, one of her most unique pieces.  I bought a plain pair of white leggings and did the rest myself.  To get this look I used the following materials: painter’s tape, teal fabric spray paint, and a pink fabric marker.

I used the painters tape around the leggings to mark off everywhere I wanted it to stay white. You want to be very careful to completely cover the area with the tape so none of the teal paint seeps through.  Then I sprayed everything down on one side with the teal, waited until it was dry, and flipped it over and did the other side.  I think it took me about 2 bottles of the spray paint that I had gotten at Michael’s to do the whole thing.  Once everything was totally dry I went back and added the pink details with the pink fabric marker.

For Vanellope’s sweatshirt I got a bit lucky at Goodwill and found a sweatshirt that was about the right color.  It was a zip-up rather than a pull-over hoodie but I think either would work as long as it’s got the pockets in the front and a hood on the back.  Of course, it now needed the pink details.  I bought pink cord on Amazon.  For the pocket detail I cut small snips to thread the pink cord through and then secured it with hot glue.  For the hanging cords I cut the actual teal cords short and then tied the pink onto them, once again making sure everything held together with hot glue.

The leggings with the sweatshirt worked well, but there was still another detail to add to the outfit.  She has a little skirt (either dark brown or black, it’s hard to tell so either could work).  I used a sparkle running skirt in brown that I already had and I think it worked well. 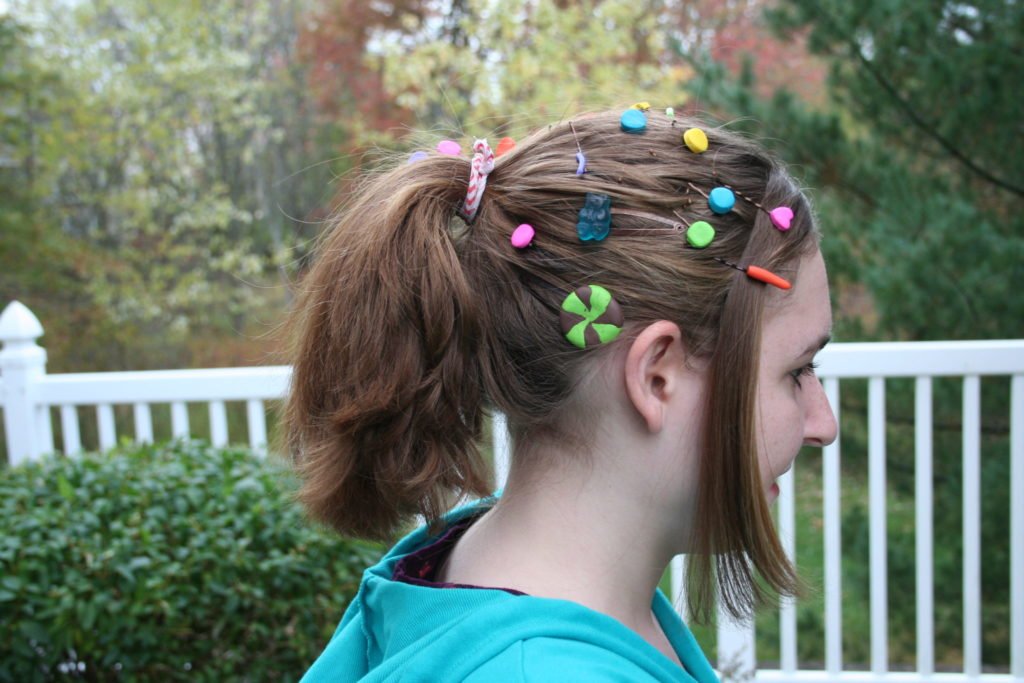 Once the outfit was done there was still one big piece of the costume I needed to complete – her hair!  Her hair is covered in candy.  I made all of the hair candy myself.  I bought clay, the kind that hardens when you bake it, and made a variety of different “candy” in bright colors – sprinkles, circle sprinkles, peppermints.  I also bought actual gummy bears and left them out so they would get hard instead of sticky and used those as well.  I used super glue to attach them all to a bunch of bobby pins and hairclips.

It took awhile to assemble the outfit, especially putting in all of that hair candy, but I thought it came out pretty well!  The best part was I was able to reuse the majority of this costume a couple of months later as a running costume for the Enchanted 10k.

Overall I was pretty proud of these costumes.  Vanellope’s was one that I really did a lot of work on and made most of, and I was happy with how it turned out.  I don’t know if I’ll get another opportunity to wear it, but I still have all of the pieces!

What do you think of our Wreck-It Ralph costumes?  What other couples costumes should we do in the future?