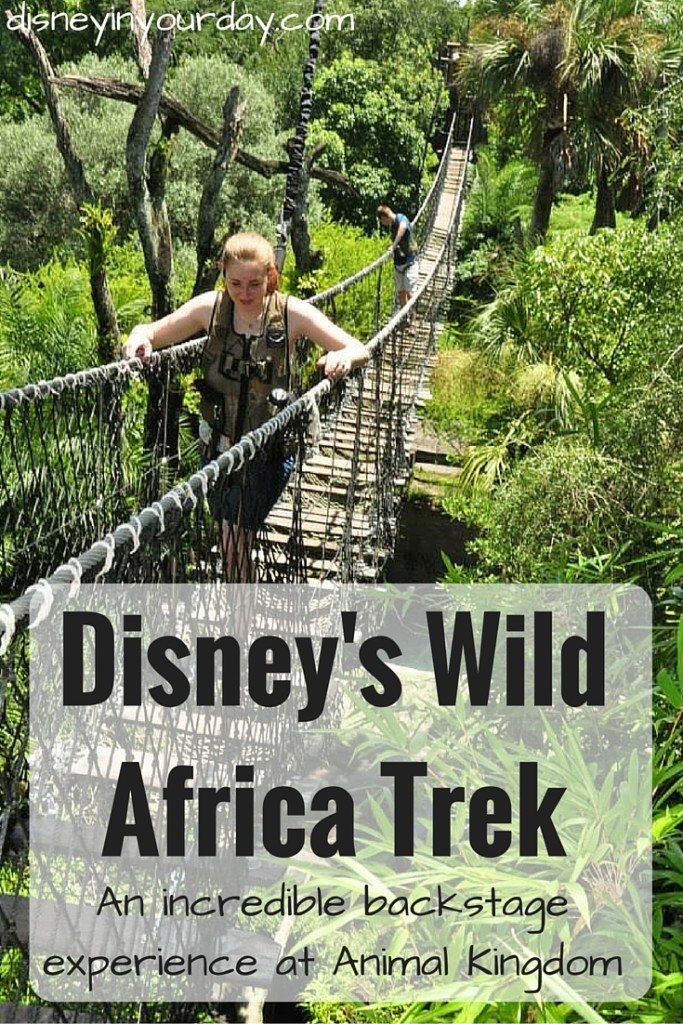 On my most recent trip to Disney, I had the opportunity to do something I have wanted to do for a long time – the Wild Africa Trek.  I love Animal Kingdom and photographing the animals is one of my favorite things, so I was super excited about having the chance to get up close and personal with them!

We checked in about 15 minutes before the Trek was supposed to start.  We were weighed to make sure we were under the 300 pound weight limit, and then we were hooked up with supplies and stuff.  We got a vest, a harness, a water bottle (that we could keep after the Trek!), and an audio guide so we could hear our guides talking.  If you had sunglasses they gave you a string to put around them so they wouldn’t fall off, and if you wanted to bring your camera they gave you a clip and a cord so you could attach it to your vest.  Anything else you had was stored in a locker.

All decked out in our gear!

We started off by going through part of the Pangani Forest Trail that is open to the public.  The two guides we had stopped at certain points to give us some interesting information about some of the animals that we passed, or point out things that we might not normally see.  Then we were “off-roading” it!  We headed out of the public area and up to the area above where the hippos are on the safari.

A third guide came out to tell us about the hippos.  He also fed them while we were there, which caused at least one of them to come right up below where we were and lift his head out of the water.  It was really cool to actually see that, and because he was eating he was also opening and closing his mouth a lot, giving us an up close and personal look at those teeth!

We continued on to the crocodile area.  This is where we crossed over some “rope” bridges and went right over where the crocodiles were.  Everything is extremely safe, as you are attached to a harness, and the bridges feel pretty sturdy.  It wasn’t scary at all, and such a unique opportunity!  I was loving taking pictures. After everyone crossed over we were hooked up to another anchor and got to go out on a ledge right above where the crocodiles were while the guides told us about them.

A private safari ride was up next, and they have special spots along the way of the safari where they will pull over and stop so you can spend some time there – getting pictures and more detailed information than you would on the normal safari.  And while you’re stopped you can stand up to get a better view and better photos.  We got some fantastic views of the elephants, zebras, and giraffes – including the new baby giraffe!  It is the first giraffe to be born at Animal Kingdom, and it was recently named “Mosi,” which means first in Swahili.  When we saw Mosi it was only his third day out on the savanna!

Baby Mosi peeking through the trees.

Halfway through the safari we stopped at a place to have lunch.  They gave us little buckets with a taste of different things.  It was really good!  The first layer had chicken curry salad, a fresh fruit salad, and smoked meats.  The second layer had salmon, shrimp, and hummus.  The chicken curry, shrimp, and fruit were my favorite, they really tasted fantastic!  The food was served with Jungle Juice.

On the Wild Africa Trek – the chicken curry is on the bottom right corner.

After eating we finished up our private safari and made our way back into the park.  A portion of the payment for the Trek is donated to the Wildlife Conservation fund, and we got to choose which animal we wanted to give to (I chose giraffe!).  All in all the tour was about 2 and a half hours and such an incredible experience.  If you’ve been considering trying it I highly recommend that you do!

Have you been on a Disney tour?  Do you think you would be interested in Wild Africa Trek?