You are here: Home / Disney Cruise Line / Whiskey Tasting on the Disney Magic

Disney Cruise Line offers a number of drink classes, where you can learn about a certain type of alcohol and try different kinds in a sort of tasting.  It’s an extra fee that you need to sign up in advance for (and you can do that either online ahead of time or once you’re on board). They have tastings for almost everything – martinis, tequila, mojitos, wine, champagne, beer, and a mixology class – and another one that we attended, the whiskey tasting on the Disney Magic.

Our whiskey tasting was held in the Cove Lounge, the little coffee shop on the top deck of the ship.  It was at 10:30pm on the night of our Key West day, so this was our after dinner activity. I’d say there were maybe 10-12 people participating in the tasting that night. 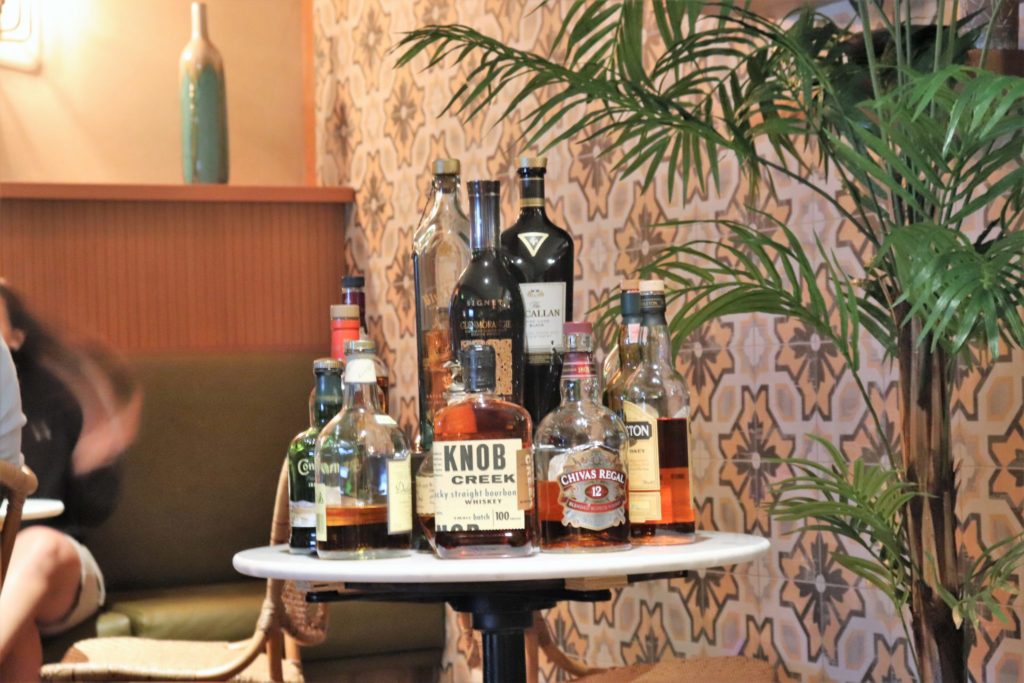 I was the only woman actually participating in the tasting! There were a couple of other women there but they were just to accompany their partners and didn’t actually participate in the drinking.  I’m not a huge whiskey fan but I’m always interested in learning more about lots of things, and since Jason is into whiskey I thought it would be fun for us to experience together.

I’m sure there will be people reading this who know a lot more about whiskey than I do, but I’m happy to say that this really was a good introduction and I learned a lot of the basics that I didn’t know – things like the differences between scotch, bourbon, whiskey, etc. We tried 4 different kinds and learned about each of them.

First up was Johnny Walker Black, a blended scotch. This one had a more smoky taste to it than the others. The second one we tried was a bourbon, which I believe was called Blanton. This was my favorite out of the four we tried, so I guess I like bourbons the most due to the somewhat sweeter taste. This one had notes of toffee and caramel. I learned that a lot of what makes a certain kind of whiskey what it is is where it comes from – so all bourbons are from America. 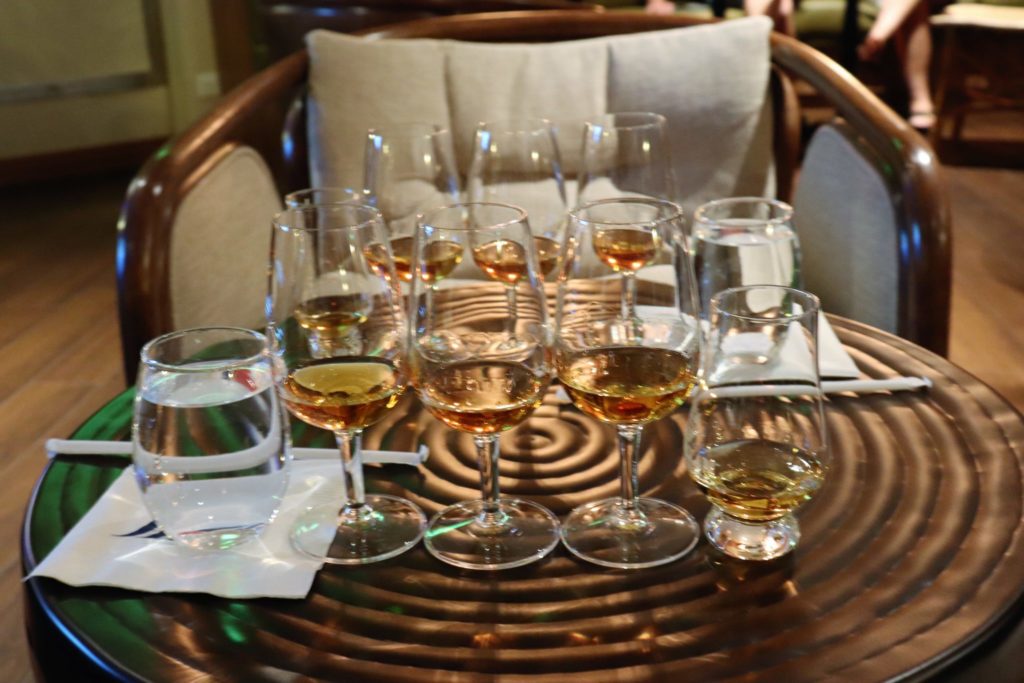 The third one was an Irish whiskey, and I apologize because it seems I did not write down the names of this drink. What can I say – it was late at night and I was two whiskeys in after a full day of fun and drinking on the ship! I have the word “Midleton” written in my notes, so I think that’s what it is called. This one was clean, easy to drink, smooth, and triple distilled. She said it’s very rare as only 50 casks are released a year.

Our final one was I believe Dalwhinnie 15 years. This was a single malt scotch that was light in color, and the flavor was smoky with pear and honey. We learned it is from the highlands and is a good introduction to single malt scotch as it is a “gentle spirit.”

I thought the whiskey tasting on the Disney Magic was a good experience and probably good for people with varying levels of familiarity with whiskey. As pretty much a total novice I learned the basics, but they provided lots of detailed information for those who knew about whiskey already. I’m glad it’s something we did on this cruise, and I look forward to other alcohol tastings on future Disney cruises!

Would you be interested in a whiskey tasting on the Disney Magic? Which kind of alcohol tasting would you want to attend?