You are here: Home / Disney World / What to know about visiting Toy Story Land

The newest edition to Walt Disney World is over at Hollywood Studios – Toy Story Land! I know I might be behind the Disney bloggers who live in Florida, who were all posting about it in the beginning of July, but I’m still excited to share my experiences and insights there.  Hopefully you all aren’t tired of hearing about it yet! 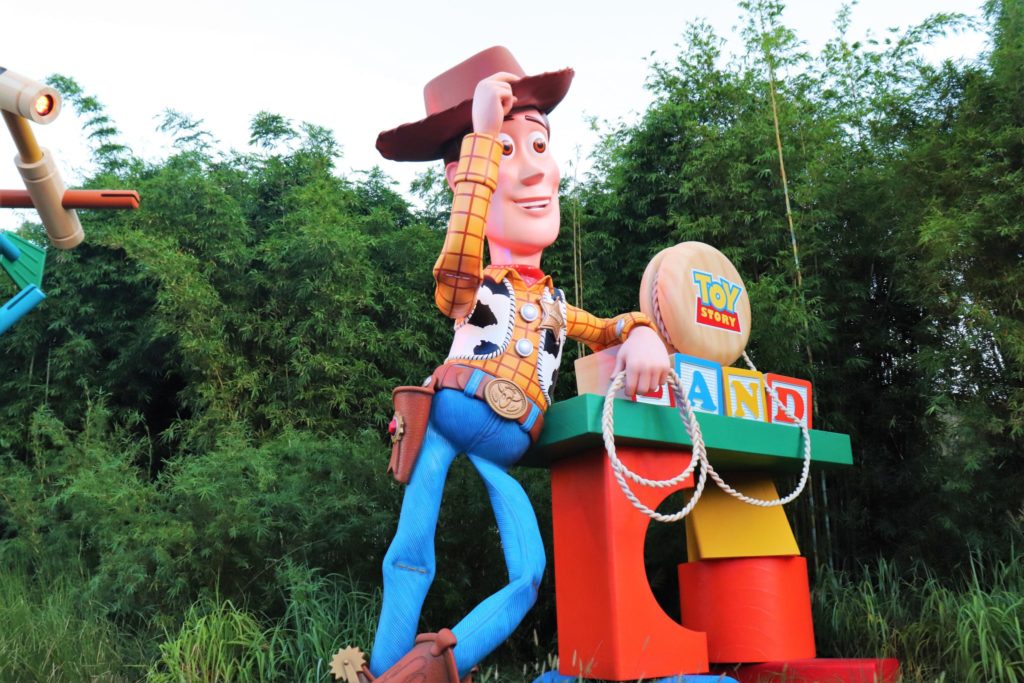 Toy Story Land is towards the back of the park. If you go to where One Man’s Dream is, in the past you would keep going to Toy Story Mania. Now you’ll make a right where the old Pixar Place was so that you’re going further back into the park. You’ll see the entrance with a large statue of Woody – who even talks to greet you! It’s also a great photopass location. 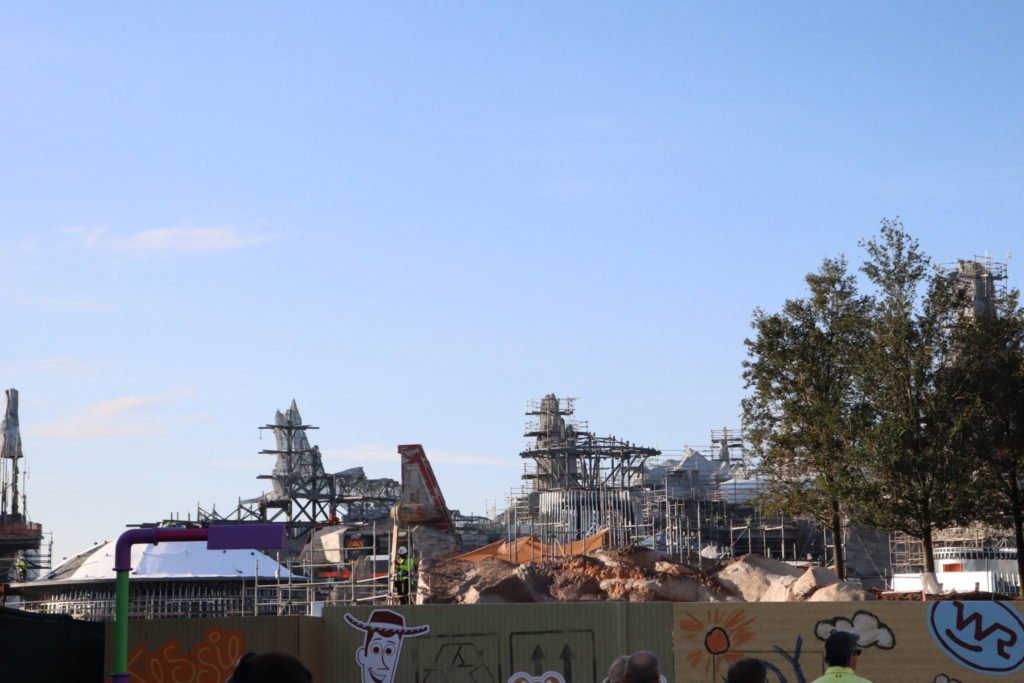 Right now Toy Story Land is a “dead end,” in that you have to go back out the way you came in. It seems like when Star Wars: Galaxy’s Edge is finished it will connect to that. And there’s no hiding Galaxy’s Edge. You can see a ton of construction from the restroom area of Toy Story Land, and even more when you’re elevated on Slinky Dog Dash. I’m not sure Walt would be a fan of the two different worlds intersecting so obviously (What would Walt want??)

Of course Toy Story Land is bright and colorful! There are lots of fun details, and we enjoyed picking out all of the little things that we came across. There are some you can’t miss, like the giant statues – including Jessie and Rex by the Slinky Dog coaster. But take time to notice the little things too. You’ll find benches made out of popsicle sticks that are stained with the color of ice pop they were, benches made out of babybel cheese, and more. 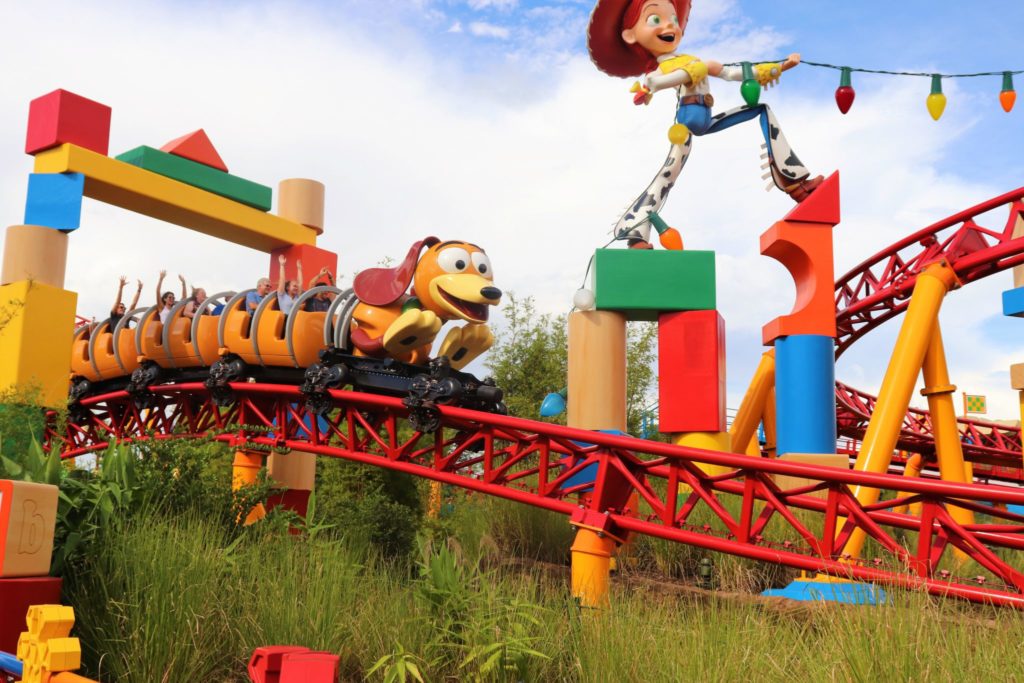 There are two new rides in Toy Story Land as well as Toy Story Mania, which has a new queue. Slinky Dog Dash is the big attraction. The track is much longer than I expected it to be and it feels like it takes up a good portion of the land. The ride itself was fun. It’s probably on about the same intensity level as 7 Dwarfs Mine Train – but Slinky is more fun of an actual coaster while Mine Train has better themeing. It’s more intense than Barnstormer but less than Big Thunder Mountain.  I enjoyed it a lot but I wouldn’t wait more than 45 minutes for it. 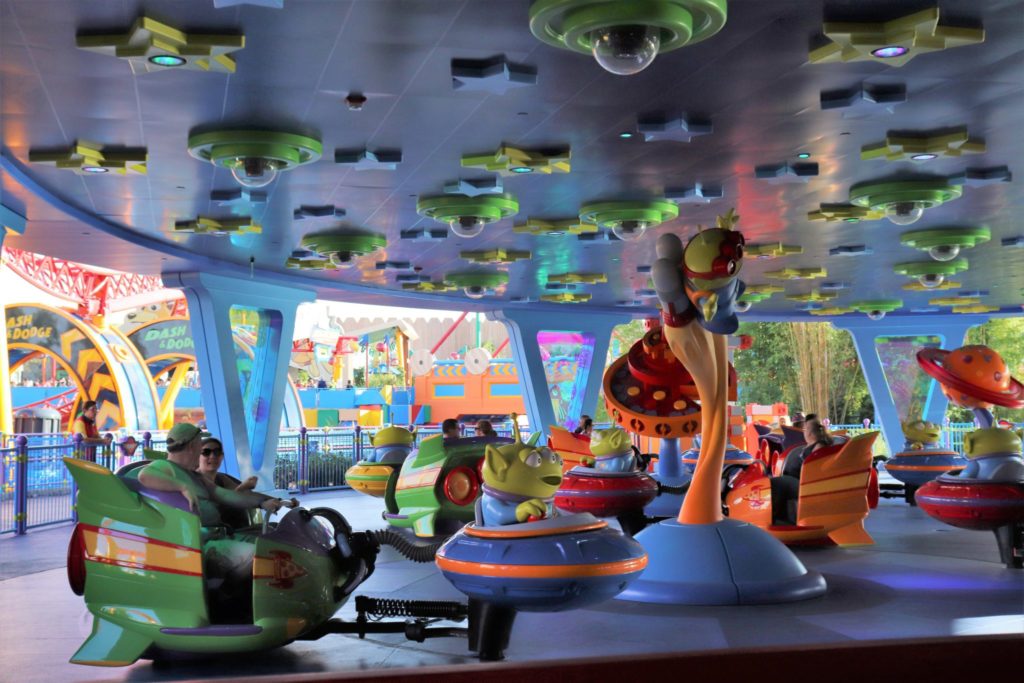 Alien Swirling Saucers is the other new ride in Toy Story Land. If you’ve been on the Tow Mater Ride in Cars Land in California Adventure than you’ve been on this with different themeing.  It’s a whip-like ride and even though it’s fairly simple, I think it’s a lot of fun. Plus the aliens are adorable!

Toy Story Mania is the same ride that it always is, but with the new attractions and the third track the wait times are a lot shorter than they used to be. You enter through a new entrance with a new/redone queue, with they had a lot of fun with the details. I personally am glad that the wait times are shorter because I like this ride a lot – I’d choose this over Slinky Dog Dash most of the time! 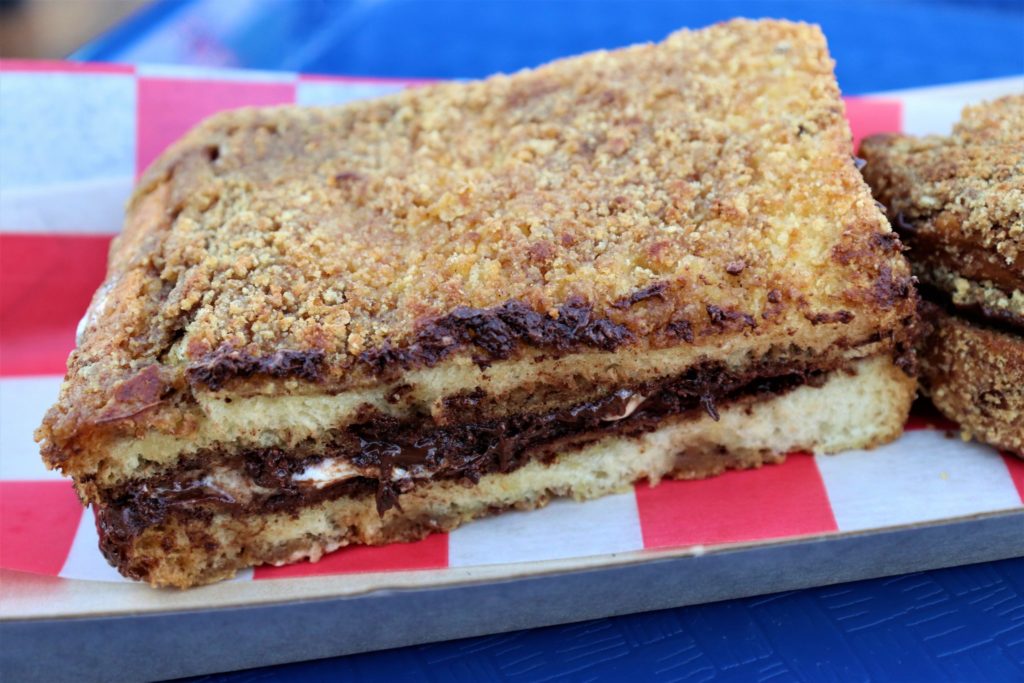 There is one new quick service location in Toy Story Land called Woody’s Lunchbox. It serves breakfast and then a lunch/dinner menu.   I ate breakfast here and my friend had dinner.  I was excited to try the S’mores French toast sandwich I have to say it did not disappoint! It didn’t necessarily taste like french toast, but all the flavors were delicious and there was a good ratio of marshmallow to chocolate.

The downside to this area is that it doesn’t have a lot of seating.  I’m sure once Toy Story Land isn’t brand new there won’t be as much demand, but it’s still a very small area for a food place.  Think along the lines of outside where Starring Rolls used to be, rather than a big space like Backlot Express.  They should’ve ditched the restrooms (there are others right before you get to Toy Story Land) and built more seating! It’s that very stressful atmosphere of having to stalk a table and then swoop down the moment it frees up. Honestly, the lack of seating is probably the top reason why I would choose to eat somewhere else in Hollywood Studios. I don’t need that stress!

The day we were there they also seemed to be pretty disorganized.  Mobile orders said they were ready for pickup but they actually weren’t, and there seemed to be a lot of confusion behind the counter. It was taking a long time to get any orders out at all. Hopefully this is something that will be easily fixed once they’ve been open longer. 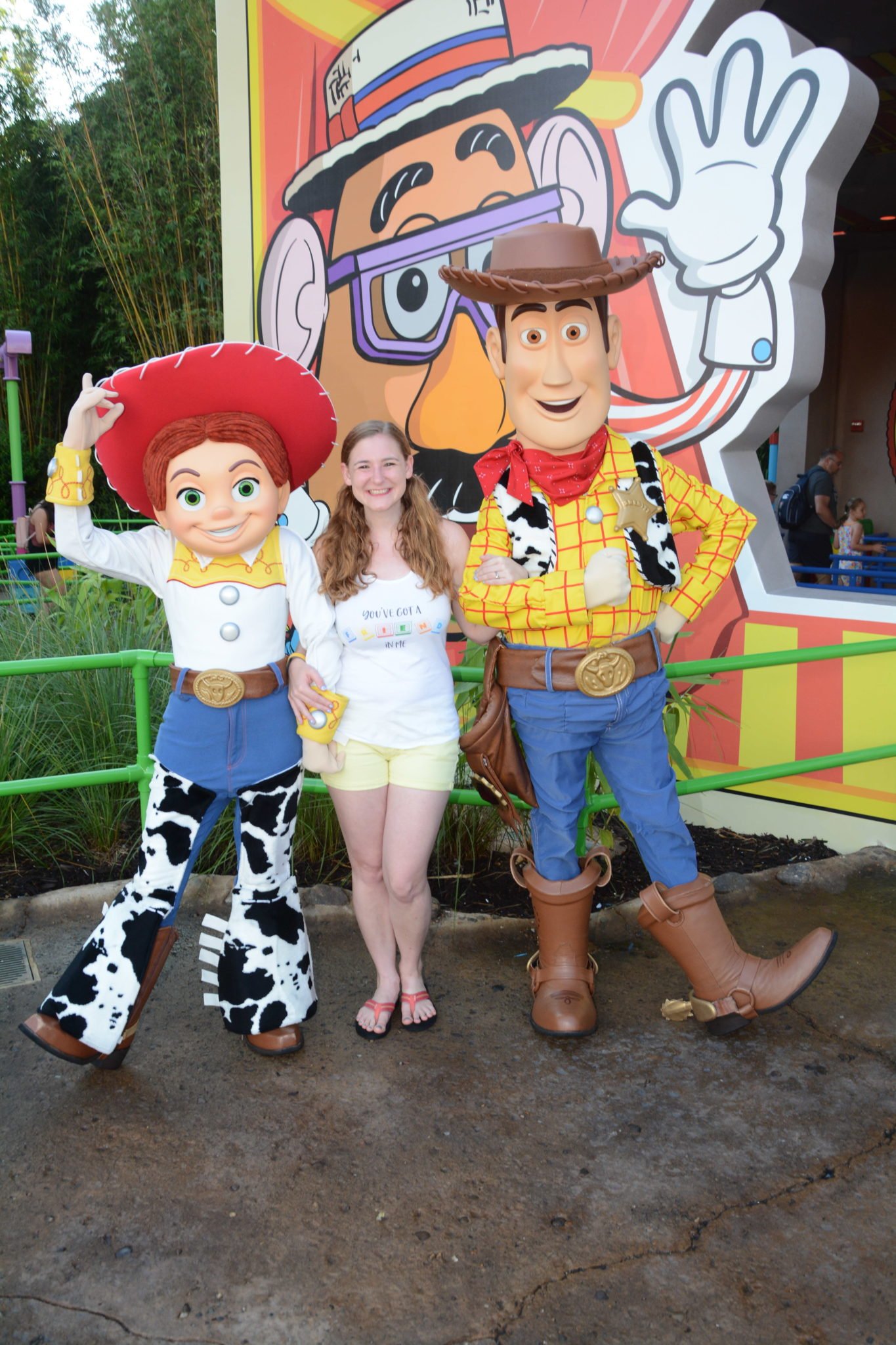 Your three favorite Toy Story characters are available for meet and greets – Woody, Jessie, and Buzz Lightyear! Currently Woody and Jessie do a meet and greet together outside of Toy Story Mania, and Buzz does one on his own right near the entrance of the park. 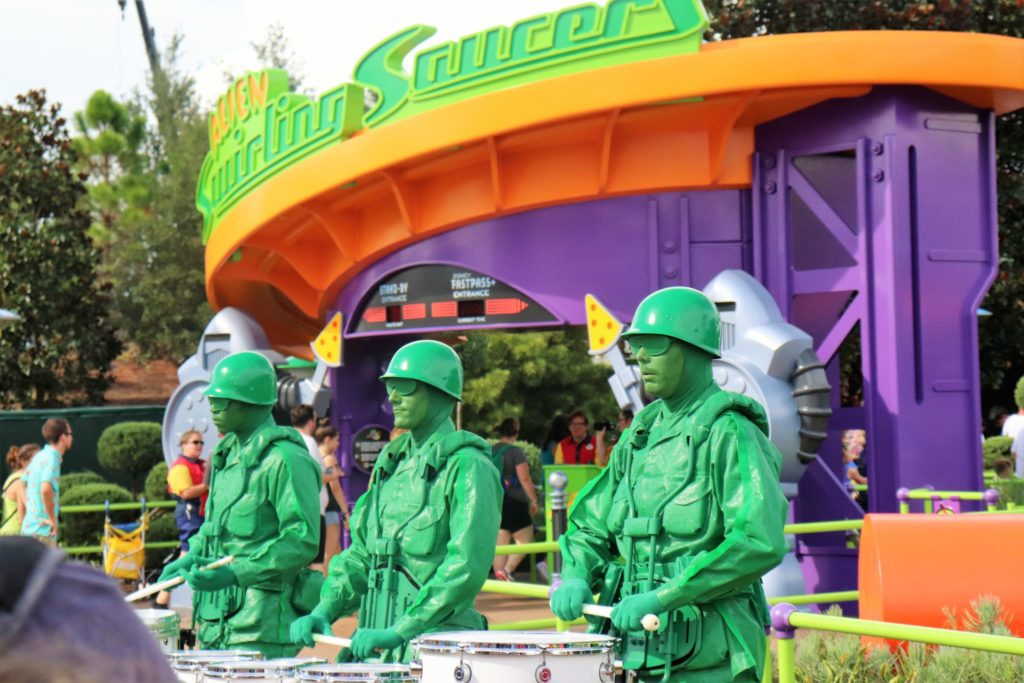 The green army men are also roaming around, and unlike before they actually talk now! The do a show a couple of times throughout the day – when I caught it, they were playing drums and marching around.  But they’ll also just be wandering around that section of the park and interacting with guests. It’s pretty cool to see characters around without a set line, and they seemed happy to take photos (though they might give you a hard time about it – they are tough army men, after all!). 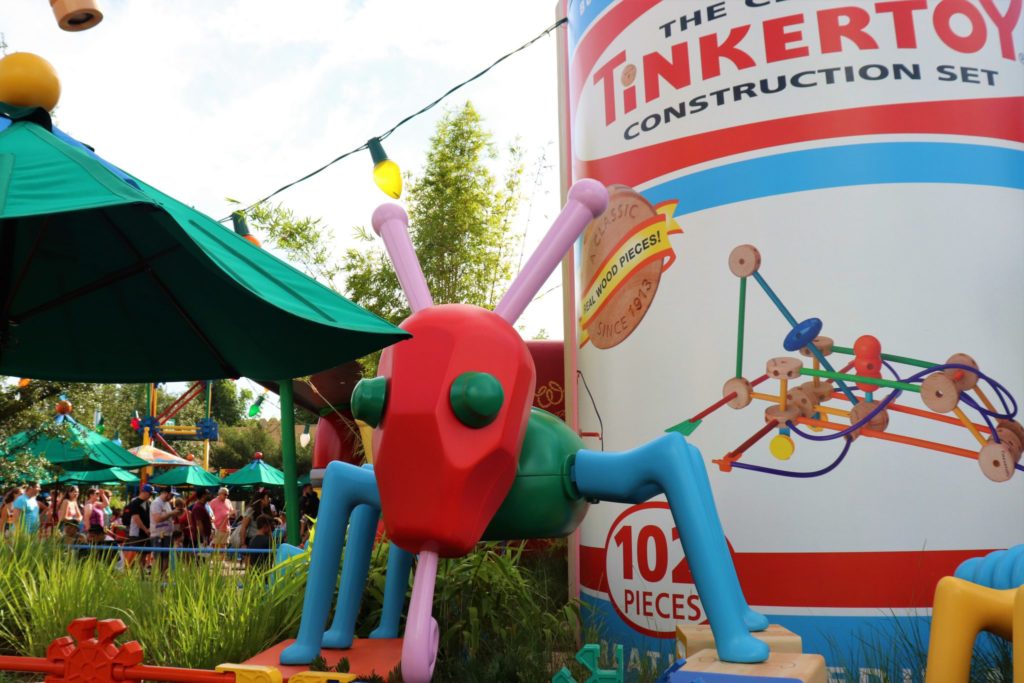 One of the major criticisms I’ve heard about Toy Story Land is how hot it gets there. For whatever reason the land seems to have been designed with pretty much no shade anywhere.  I’ve heard it suggested that it was designed by people not familiar with the Florida heat, but it certainly seems a pretty big oversight! So be prepared when you visit that it IS hot.  The only real coverage is the small umbrellas in the food area, and as mentioned above, there aren’t many of them. While you’re in Toy Story Land there is no place to hide. Even large portions of the queues are out in the sun, so if you’re visiting during the summer months load up on those misting fans and bottles of water! 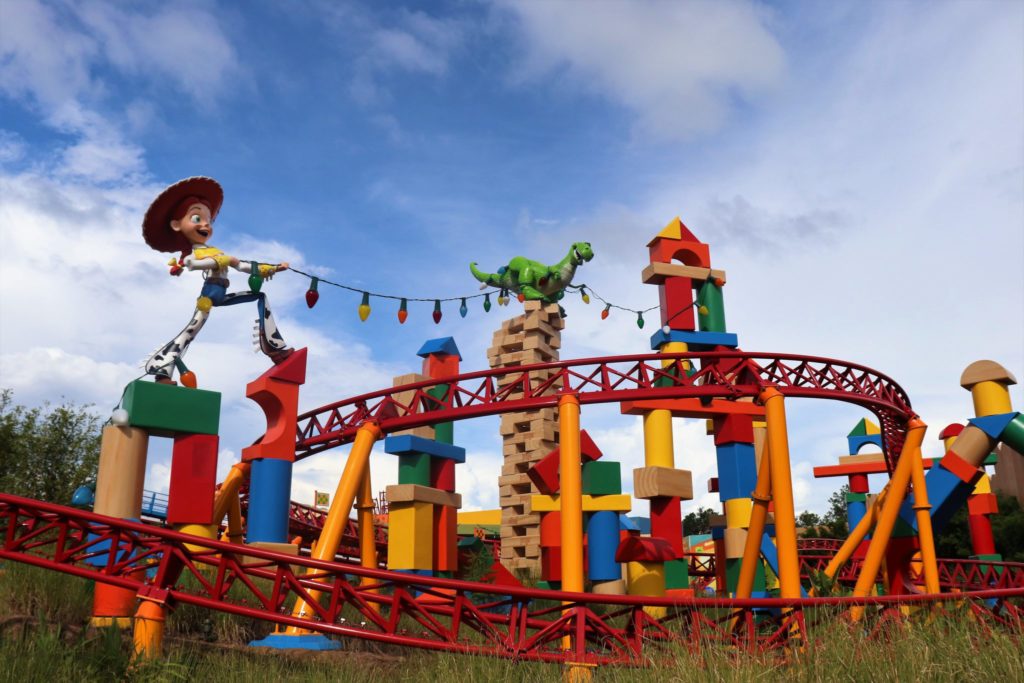 Overall Toy Story Land is a nice experience. It’s bright, colorful, and should appeal to both kids and those who are kids at heart.  That being said, nothing felt like a “show stopper” in this new attraction. All the little details are great, but the rides aren’t at the top of my must-do list. Out of the 3 rides there my favorite is actually still Toy Story Mania (though I enjoyed the other two a lot!).  I was disappointed to see the small seating area for Woody’s Lunch Box – that’s a big priority for me since I’m such a foodie!  But I’m very glad this land is here and breathes a little more much needed life into Hollywood Studios.

Have you visited Toy Story land yet? What are your thoughts on it?