You are here: Home / At Home / What to expect at City Works in Disney Springs

Disney Springs has seen many new restaurants open lately, with more still to come – but one that I am particularly excited about is City Works Eatery & Pour House! They’re going to have fantastic food and beer, and I happen to know that because we have a City Works right in the town where I work! So some friends and I headed over there to try out the food and drinks to give blog readers a bit of a sneak peek about what to expect when it hits Disney Springs.

They are planning for a winter opening of this restaurant, and the manager of the King of Prussia location said they are hoping it will be open by December 2019. The space in Disney Springs will be even bigger, with both indoor and outdoor seating an an outside bar. 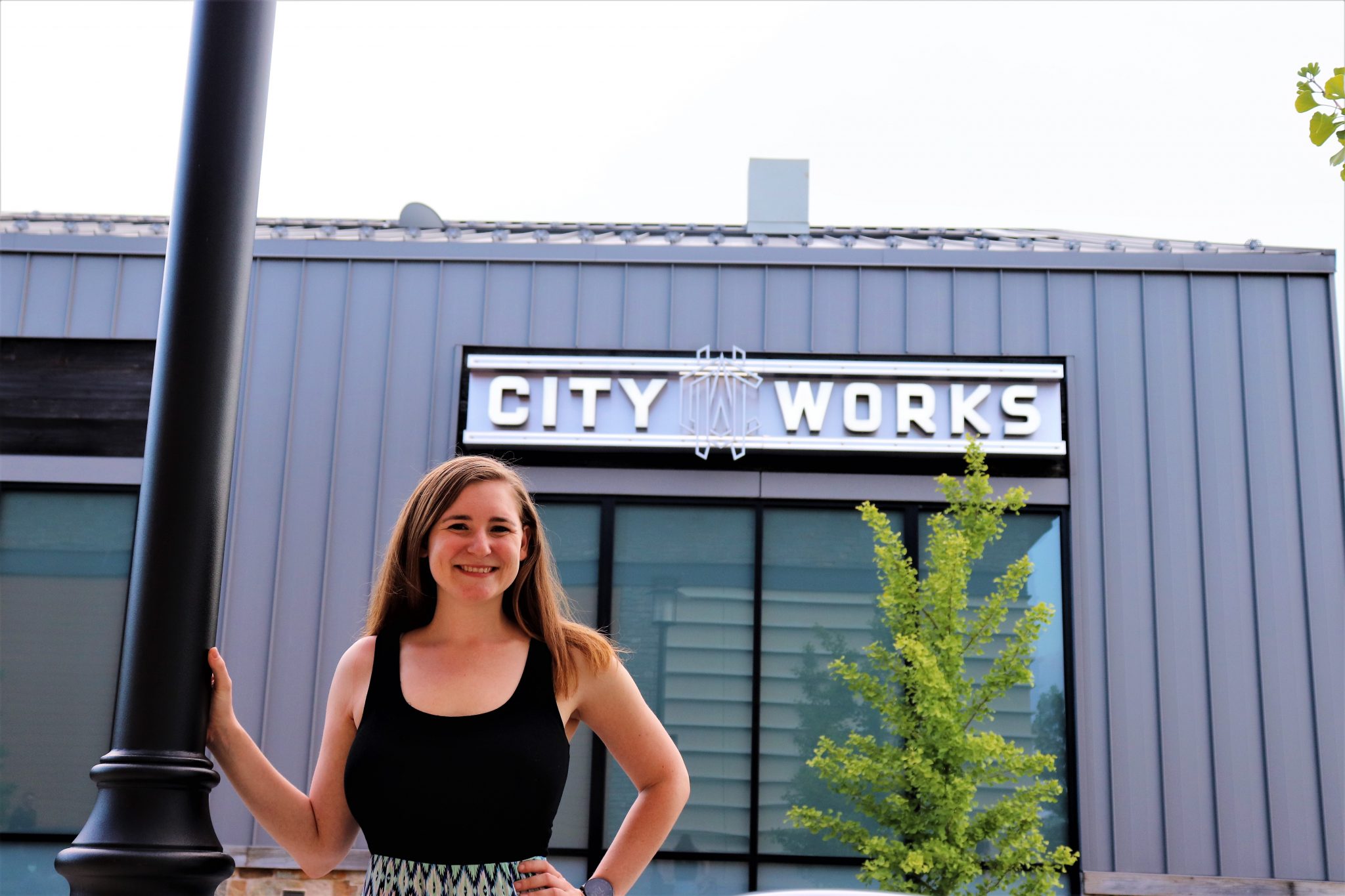 The food menu is expected to be mostly the same, though the Florida location may see some additional options. There will be lots of beers from Florida local breweries on tap as well. Let’s jump on in and see what my King of Prussia experience was like!

City Works is like an upscale sports bar. With the great food it would make for a good compromise for any family members who have a big sports game they need to see. There are lots of TVs along the wall which show a variety of different channels so chances are your game will be on. 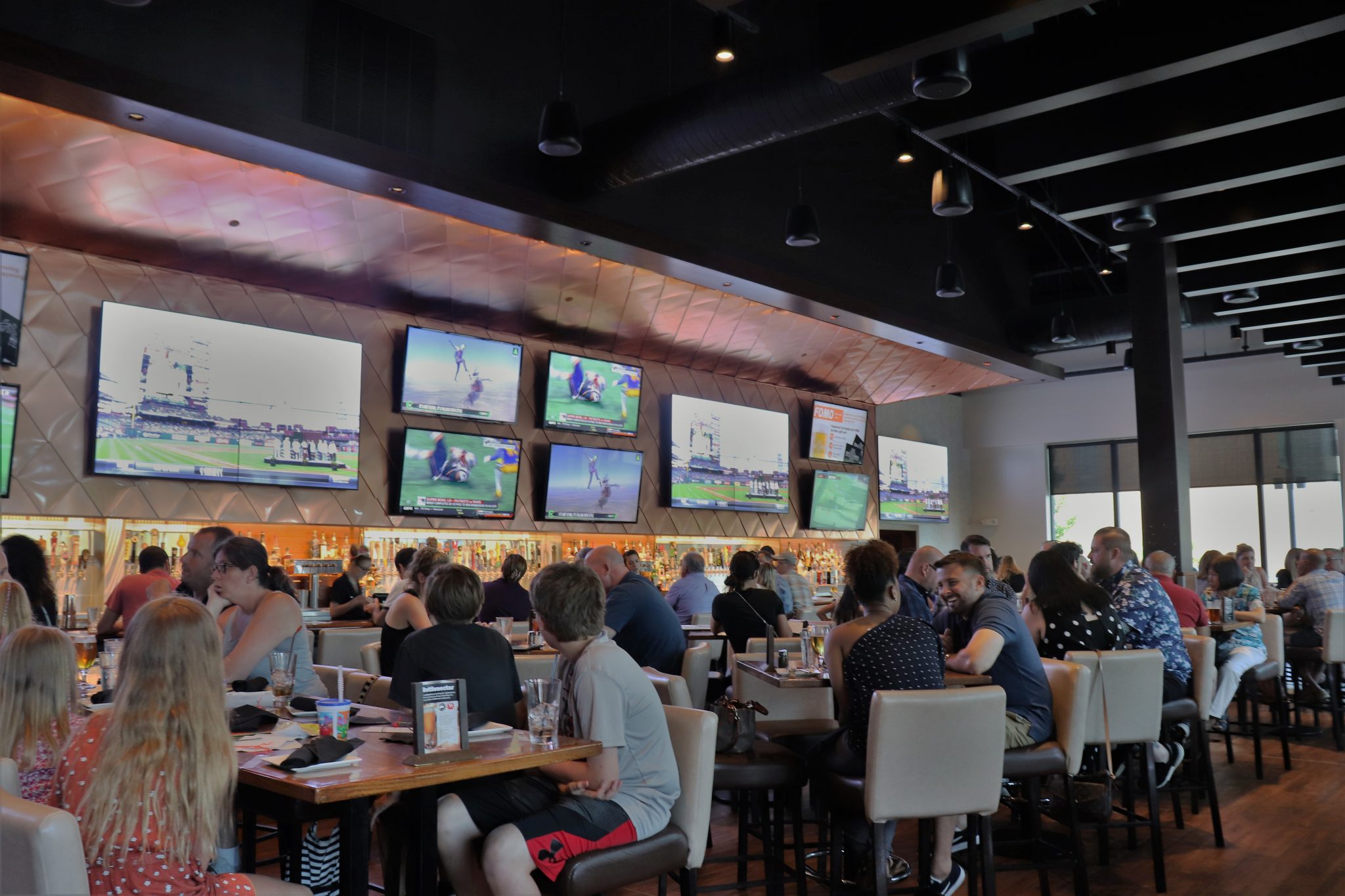 Despite all of the TVs on one side the restaurant still has a light, bright feeling to it thanks to large windows on all of the other walls and lighter walls and furniture.  One of the walls also has large boards with all of the beers they have on tap – and it’s a lot! This photo shows just one of the lists (there’s another just to the right of it). 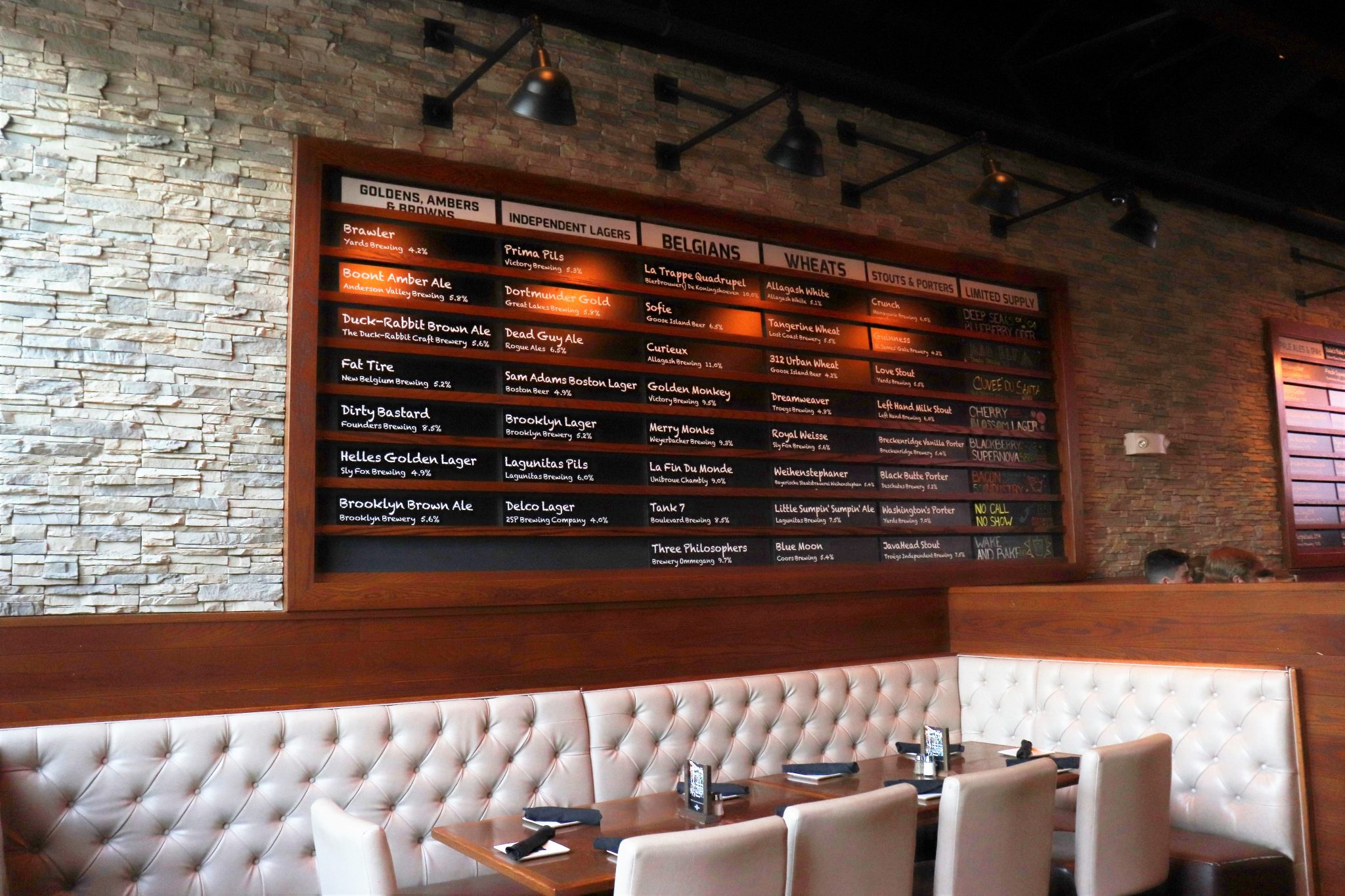 As I mentioned, City Works is known for their beer. I’ve become a bit of a beer connoisseur, so looking at the 90+ beers they have on tap was a dream come true! I love trying new things, and according to the Untappd app I have I have tried 576 unique beers in my life… so this was a good opportunity to add a few more 😉

With so many options it only made sense to go for a flight. Unfortunately their beer that is exclusive to Bottleneck Restaurants (which owns City Works) had run out. That one is called the Bottlenectar by Goose Island, so I’ll have to be back sometime to try it. A tried a number of the more unique sounding beers on my flight:

I was definitely pleased with this flight as I enjoyed all of them! Both the Banana Bread and the Cherry Blossom were unique, and definitely tasted like what they claimed. I love Evil Genius beers but hadn’t tried this one yet. It was a blood orange pale ale and I enjoyed it a lot. However, my favorite on the flight was Sofie. It’s a saison, which is my favorite kind of beer which you don’t find all that often.

The rest of the party tried a few other beers throughout the night, including the Seaquench Ale from Dogfish Head (Milton, DE), Blackberry Supernova from Half Full Brewery (Stamford, CT), and Monk’s Cafe Flemish Sour Ale (Belgium). We were also given a sample of the Rose Ale from Workhorse Brewing (King of Prussia, PA). The

If you’re not a beer fan don’t worry, they have wine and a nice looking cocktail menu too! One of my friends tried the Peach Cooler (Maker’s Mark, peach schnapps, fresh lemon juice, orange juice, simple syrup, lemon-lime soda): 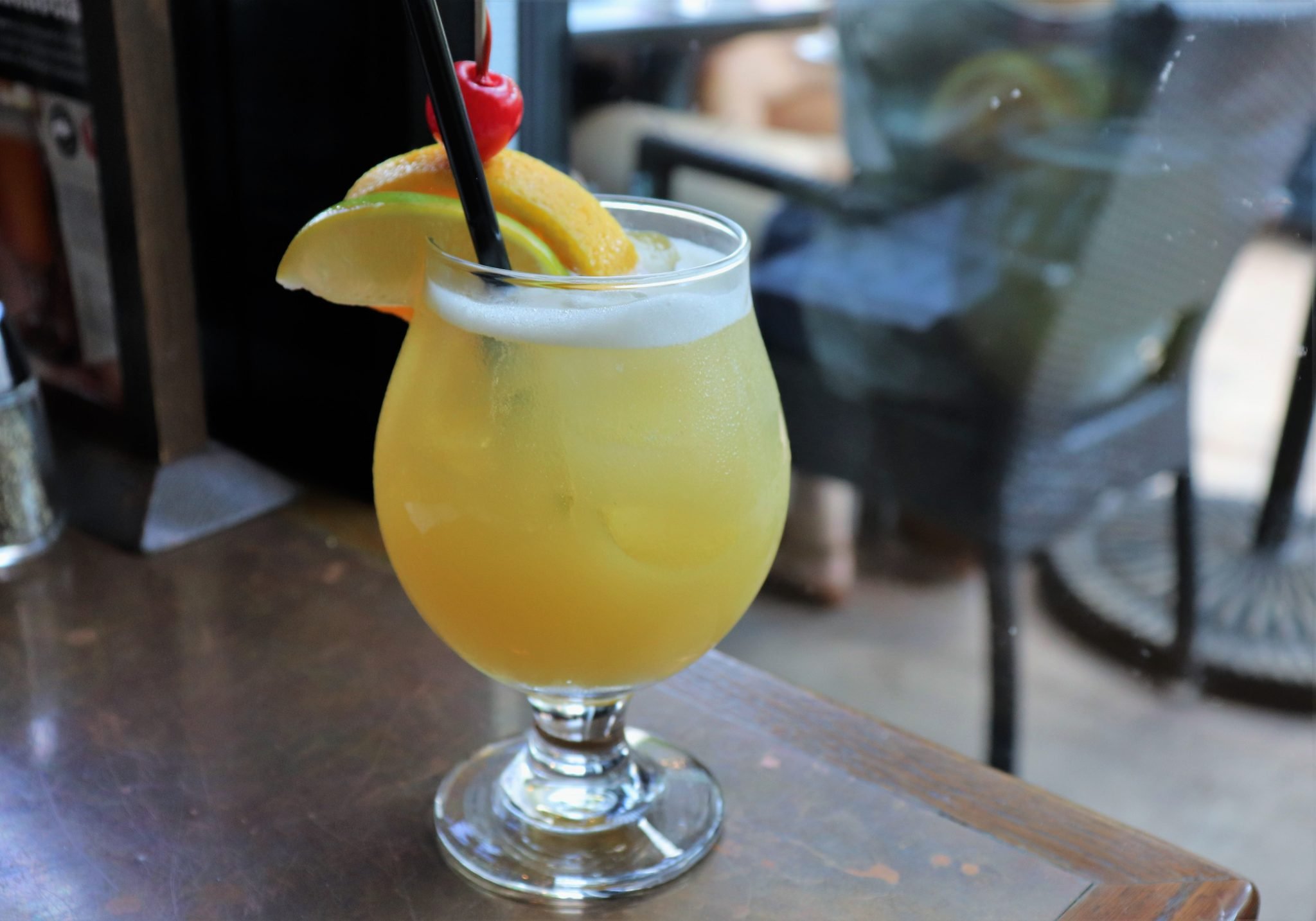 She enjoyed it though thought it was a bit more sour than she was expecting and not overly sweet. It was still very good though.

We decided to start with some appetizers for the table, but since pretty much all of them sounded amazing it was hard to decide which ones! We ultimately chose three and were not disappointed. 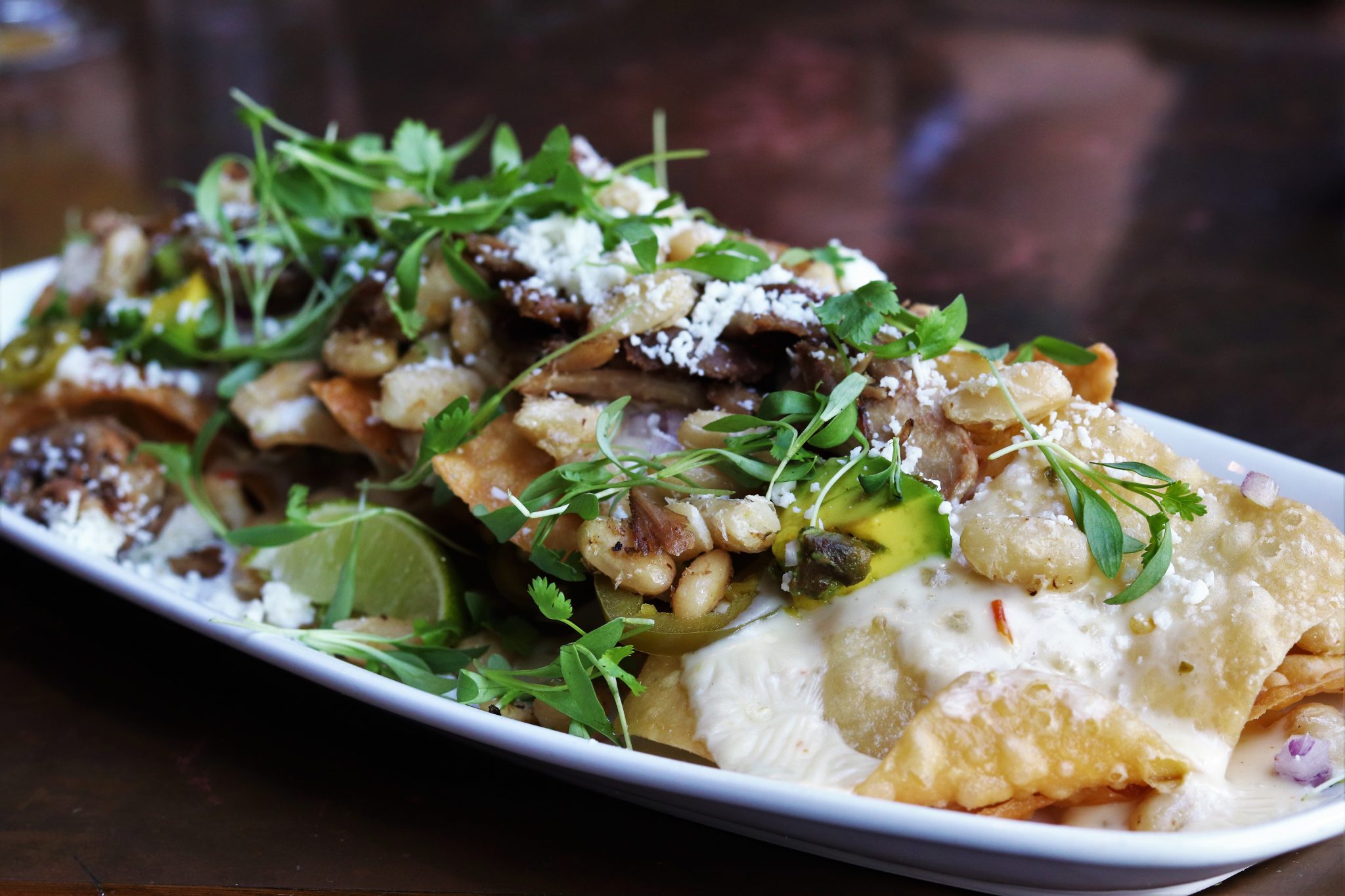 Our server, who was wonderful and clearly knew the menu well, told us that we could do pulled chicken instead of duck or a little bit of both if we wanted to. Duck may not be appealing to everyone so it’s good to know chicken is an option, but we stuck with the duck. This was probably the favorite of the three appetizers, though it was hard to choose! The flavors all worked really well together with a bit of spice from the jalapenos, and the chips were thick and up to holding all the toppings. The one thing to note about this dish is that while it is a lot of food the chips themselves are really big, so it made it a little trickier to eat. 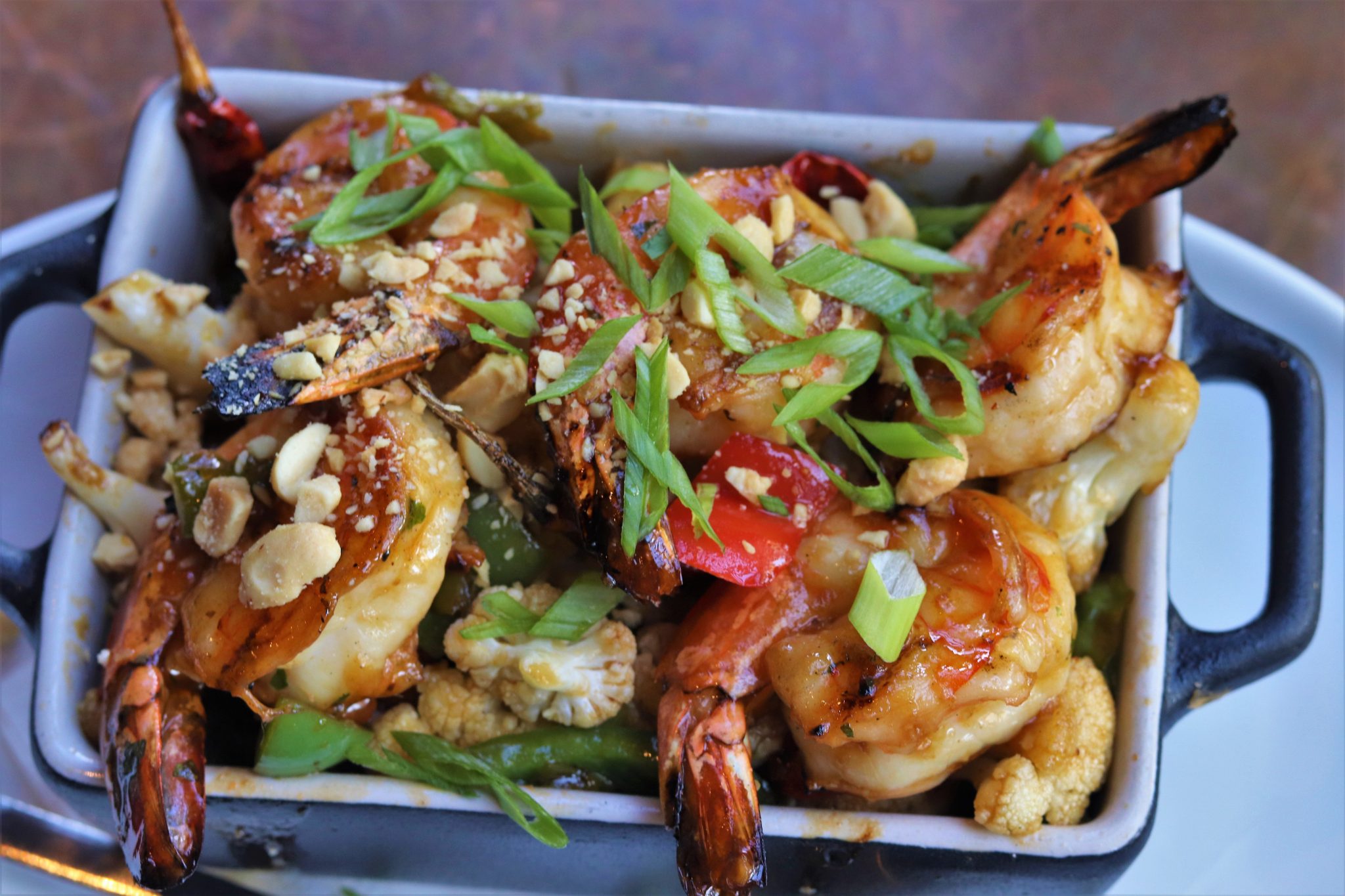 I love Kung Pao and this was nice and flavorful. This was another “menu hack” that our server suggested – she told us it makes the dish a little more interesting to add shrimp to the cauliflower, so we went ahead and did that. There were 5 large, delicious shrimp on top. However, I personally liked the cauliflower itself best because it did a really great job at soaking up all that Kung Pao sauce. There was a good bit of spice here too but nothing overpowering. Without the shrimp this is a great vegan/vegetarian option. 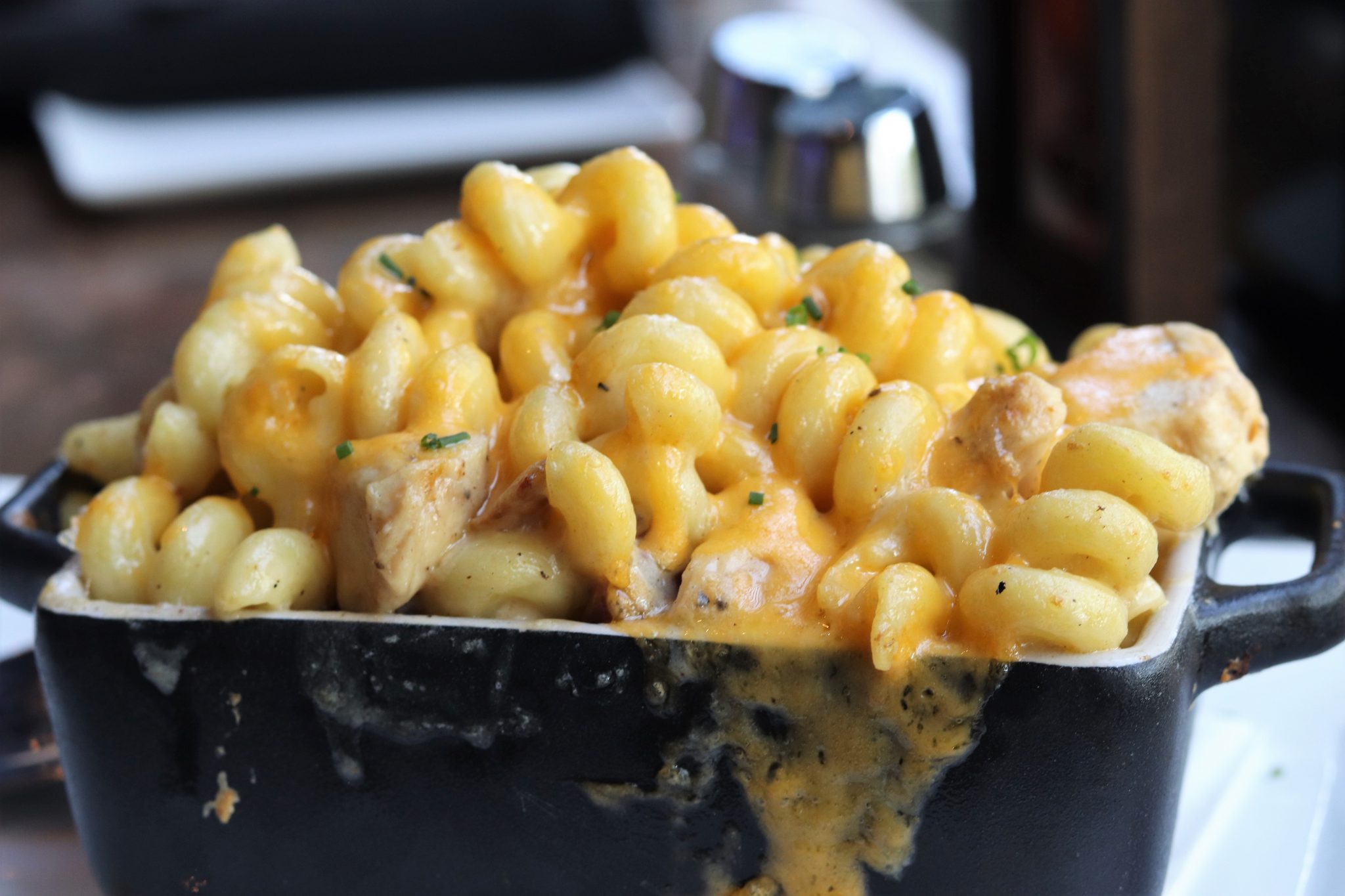 I’m a big fan of mac and cheese and have had plenty of it in Disney, but this is one of the best mac and cheeses I’ve had anywhere. The cheese flavor was great, and the bits of chicken and bacon in made it a really fulfilling dish that wasn’t just one-note. You could easily have this as your meal and be satisfied. 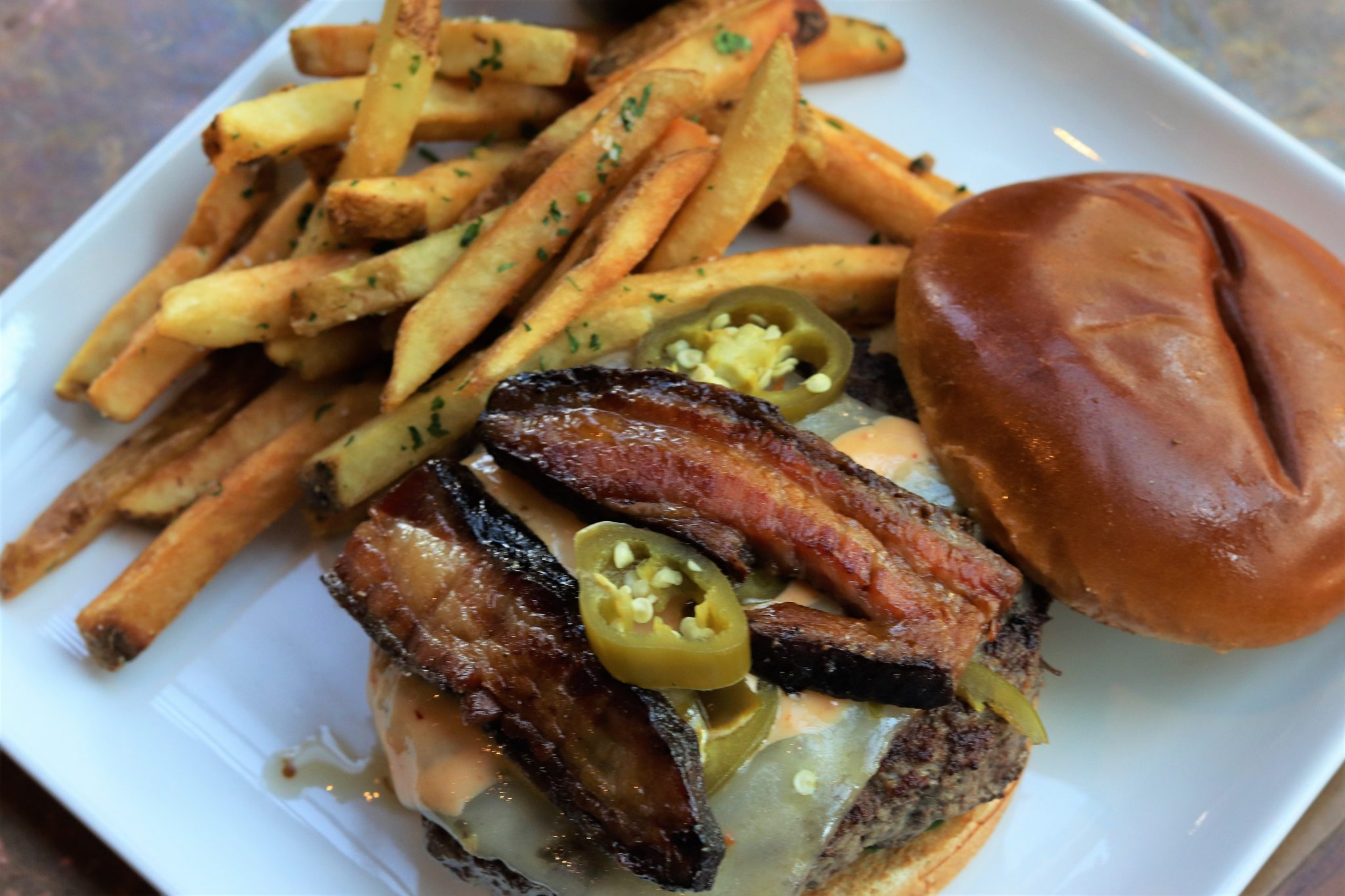 Since this is obviously a spicy meal, our server recommended adding bacon to cut the spiciness a little bit. This turned out to be a fantastic idea. I didn’t find the burger to be so spicy I couldn’t handle it, but the bacon was flavored with something sweet (possibly maple?) and it created an amazing contrast of flavors between the sweet and spicy. The pepper jam added a bit of sweetness as well. This was honestly one of the best burgers I’ve ever had. I already told Jason that when I get into my really long runs for marathon training this winter we’re coming here for lunch when I’m craving a burger. 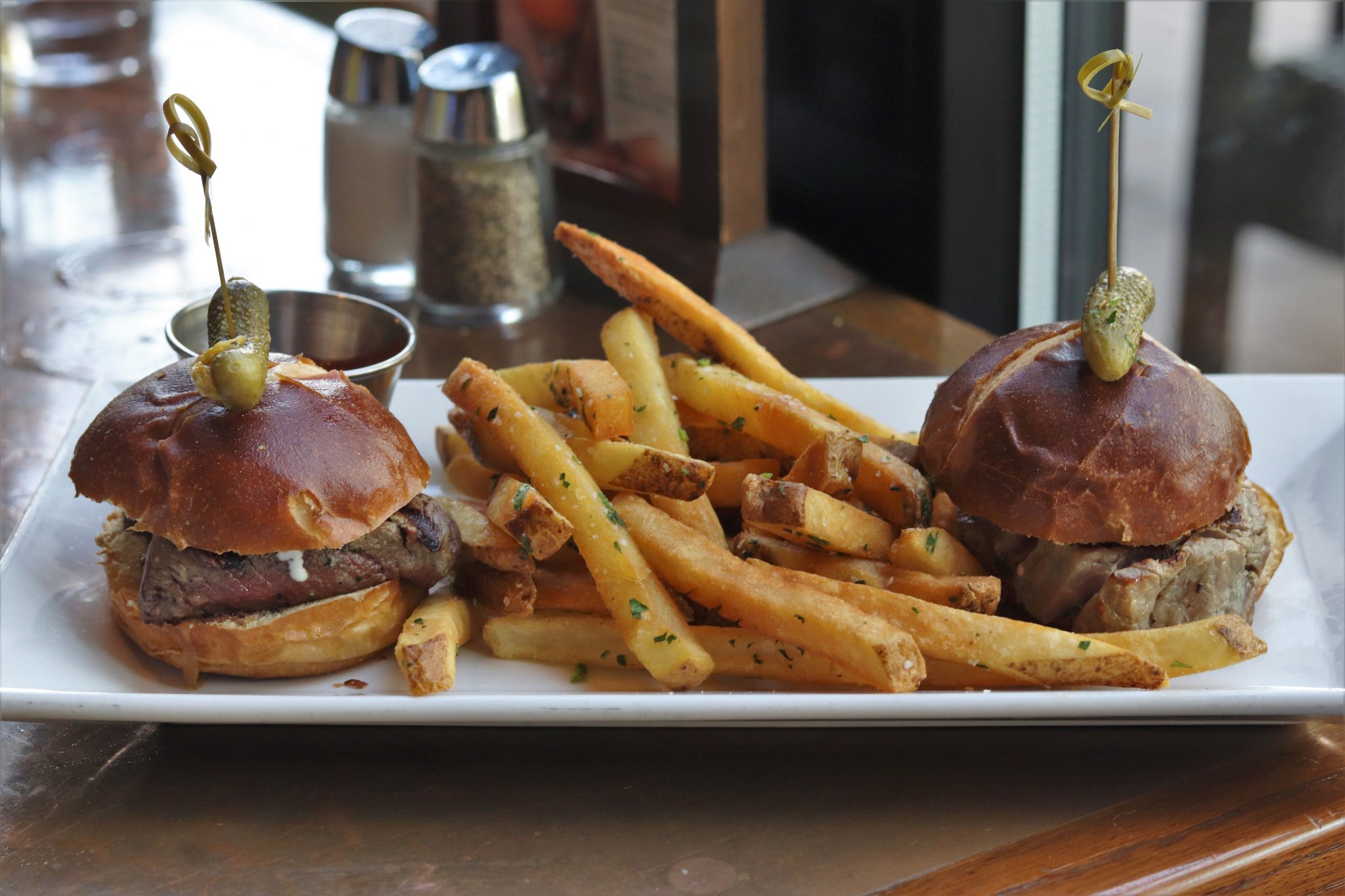 These were very good, with two nice pieces of filet that were cooked well. She asked for it medium rare and they came out at least medium. The one downside is that there was not much horseradish cream on them. This turned out to be a good thing for her (as she doesn’t like horseradish and forgot to ask for it to be left off) but for someone like me I would definitely have asked for a side of it to add. Now is a good time to mention too that the fries are excellent. Crispy and seasoned with olive oil and parsley. 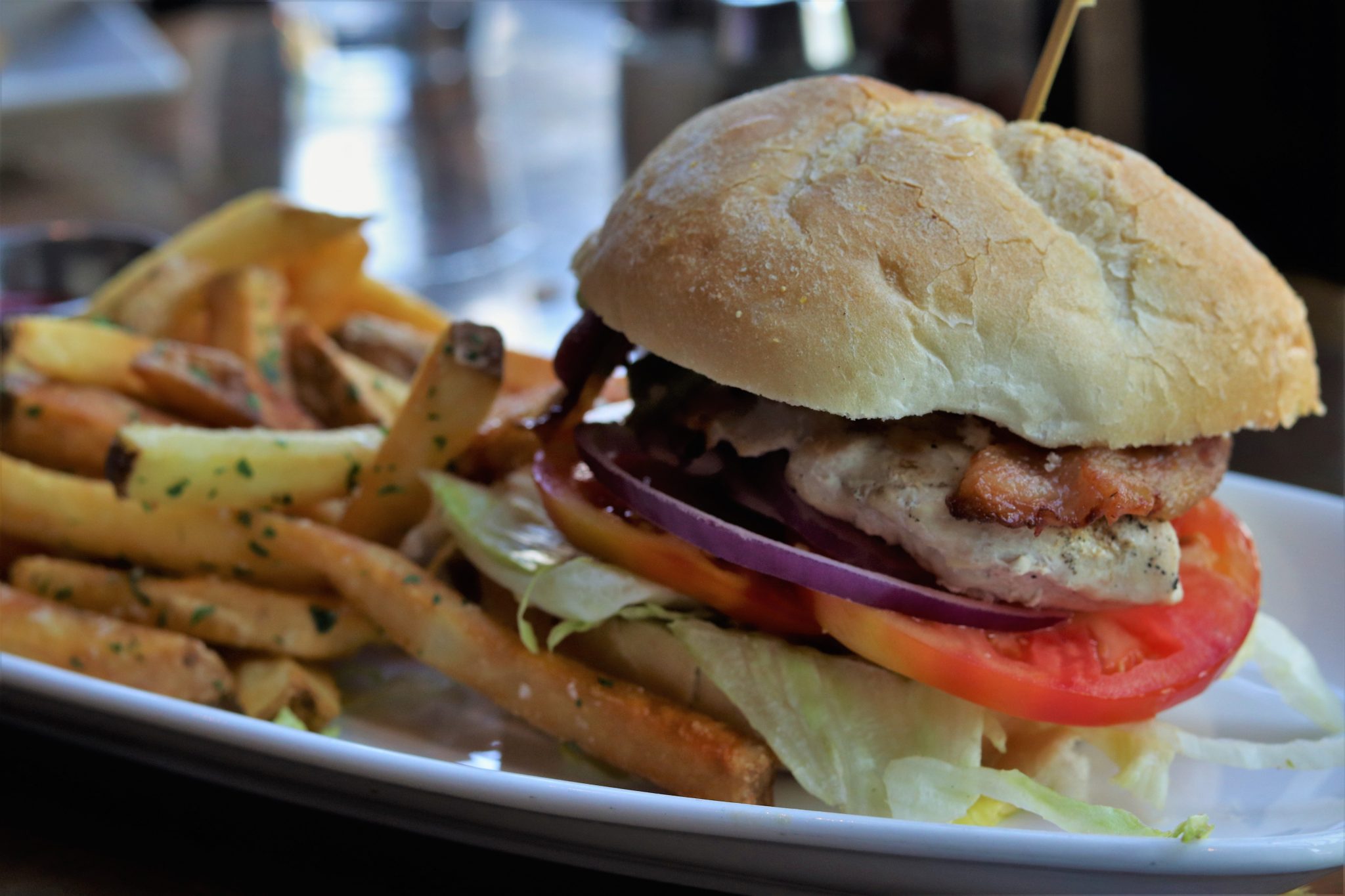 Unfortunately, this was the one “miss” of the evening. There was nothing really wrong with it, but it just didn’t stand out or wasn’t particularly interesting. Despite the descriptions of french fry aioli and avocado jalapeno sauce, it tasted like a fairly average chicken sandwich. If you don’t have adventurous eaters something like this may be a good choice for you. The kaiser roll also wasn’t great as it was a bit crumbly. 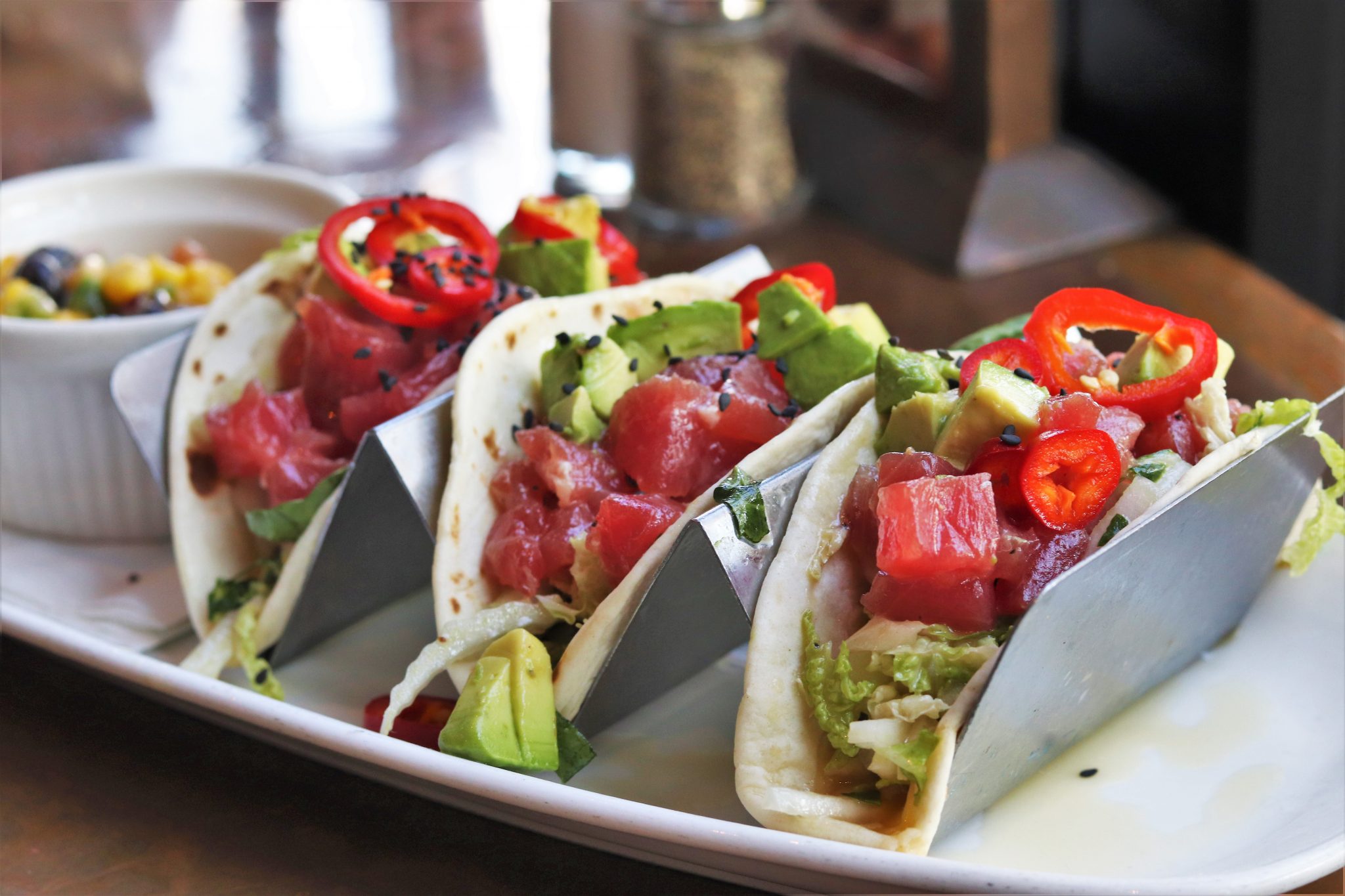 This was also really good, with three generously sized tacos and plenty of ahi tuna packed in there and lots of avocado. This was the only dish we ordered that wasn’t served with french fries – instead it came with a sort of corn/bean mixture.

There are currently only two desserts on the menu, but they both sounded mouth-watering so of course we had to order them both. They are definitely sharing sized after those entrees! The manager mentioned to us that they are hoping to get a third dessert on the menu, particularly in the Disney Springs location. Something non-chocolate and possibly more fruit-oriented such as a key lime pie. 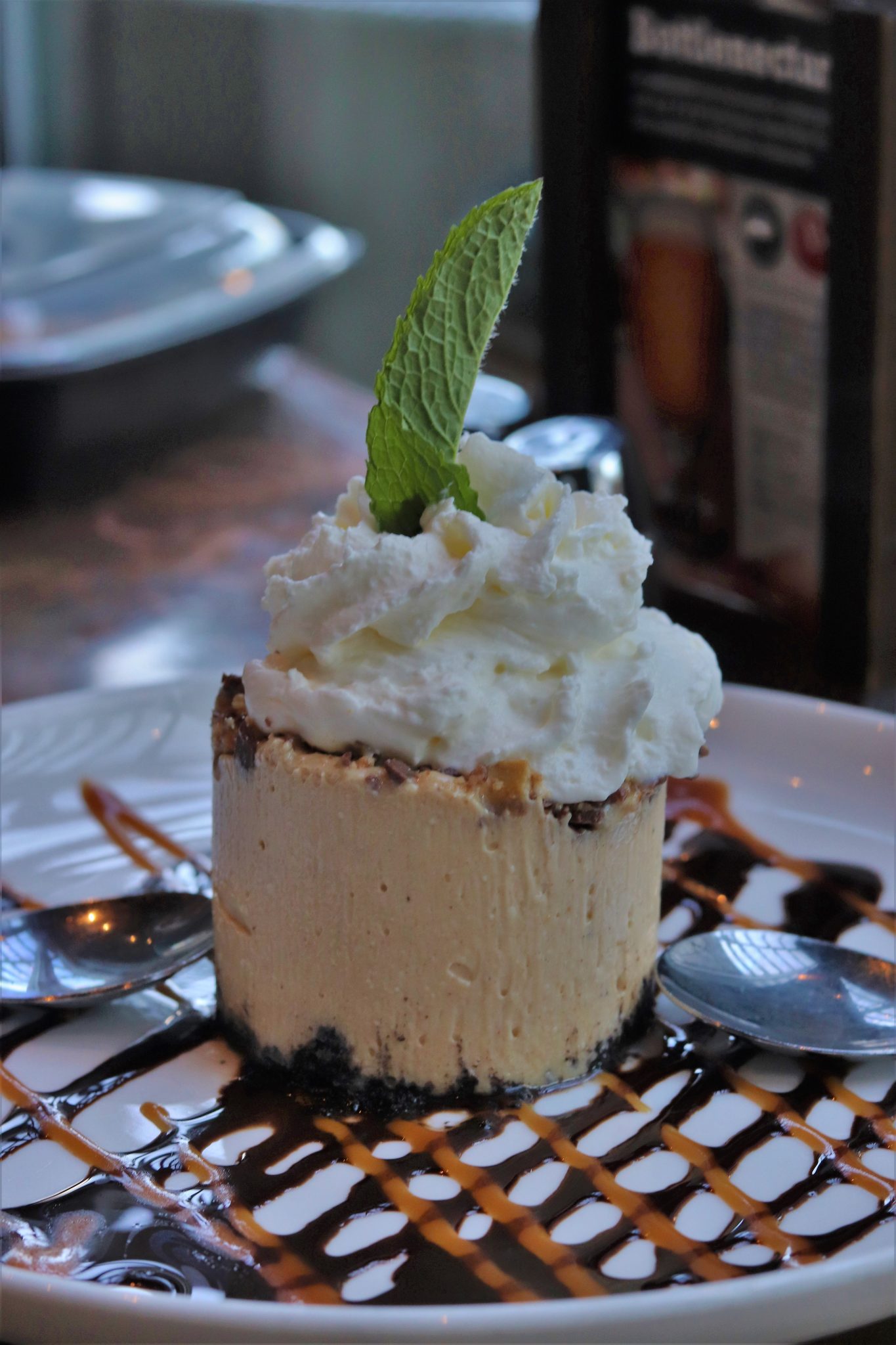 This one is wonderful for peanut butter ones. I really enjoyed it and waffled back and forth on whether or not I liked this dessert best. I thought it could use maybe a touch more chocolate on the bottom, but the peanut butter mousse was delicious and the snickers crumble on top added a good bit of texture. 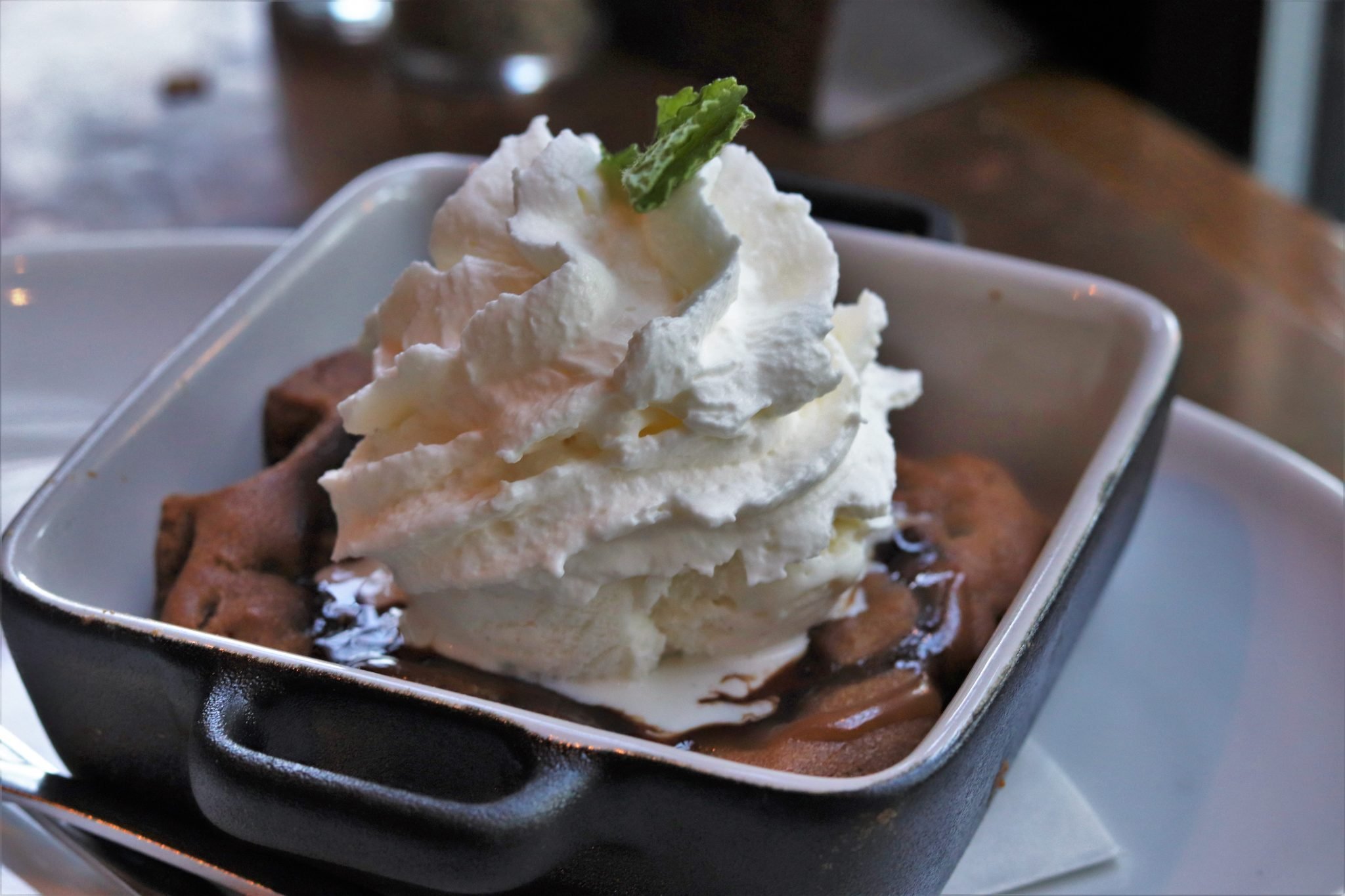 Yeah, this was amazing. A warm baked cookie with caramel and chocolate topped with vanilla ice cream? Hard to go wrong with that, and the table pretty much declared it the unanimous favorite dessert.

While I expected to enjoy some good food and beer at City Works, I didn’t expect to encounter some of the best things I’ve eaten in a long time – but that’s exactly what happened here! Most of the food items were absolutely delicious, and the beer variety was incredible.

When I first heard City Works was opening in Disney Springs I didn’t know if I would make an effort to go there much when I visit since we do have one right here in King of Prussia. However, I think I will definitely be checking it out. I know I can get some great food and I’d love the opportunity to try some of the local beers on tap down there! Many at the KOP location were from Pennsylvania, Delaware, etc., so being in Orlando and getting to try a variety of Florida beers will be fun.

They also have a small brunch menu available on Sundays that the manager mentioned they are working to expand. Given how well brunch seems to go over at Disney World right now I think a brunch here would be a great addition. 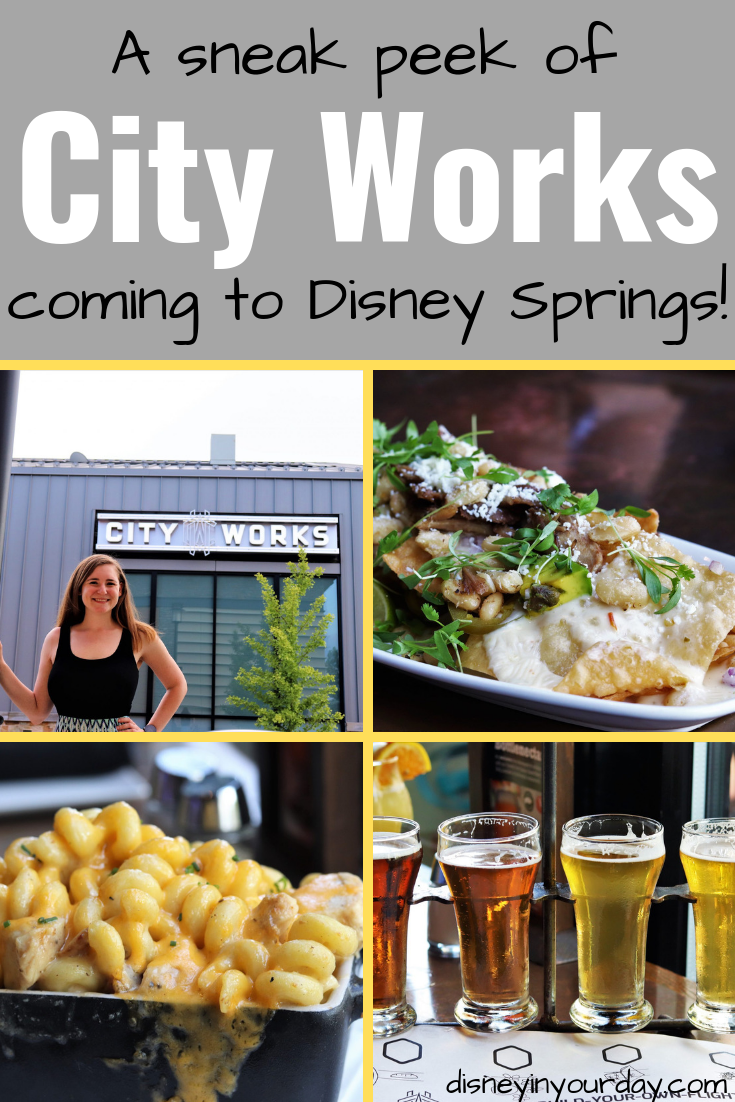 Are you interested in eating at City Works in Disney Springs? What would you most like to try?