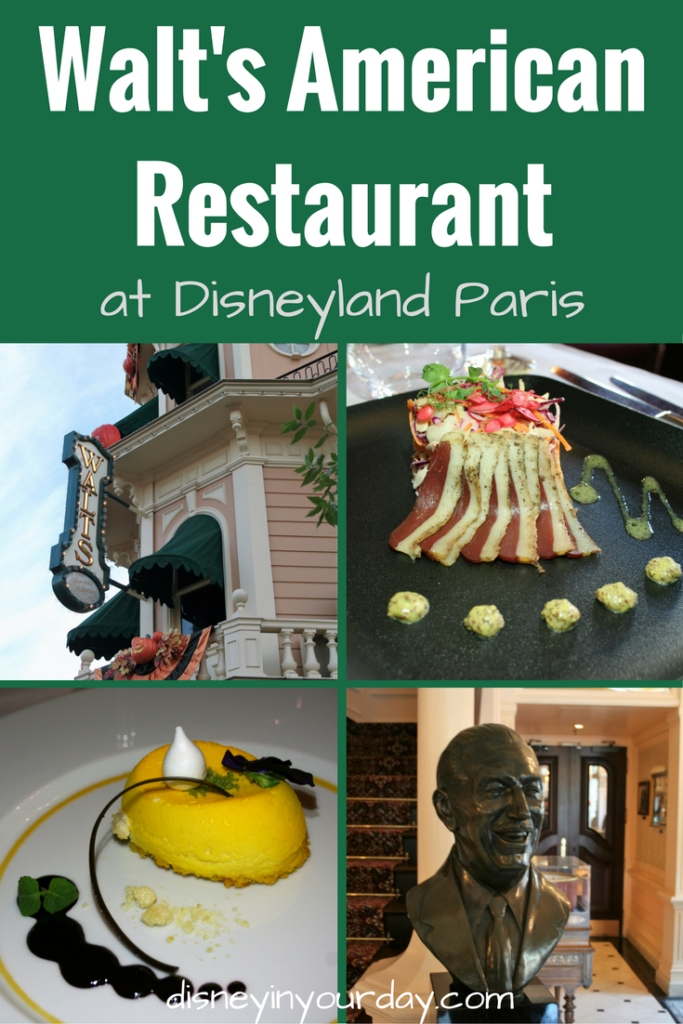 On our final evening in Disneyland Paris we headed to Walt’s American Restaurant. This one is more expensive than the others we visited and probably on par with the signature restaurants at Disney World.  But we always like to do a fancier place the night after I complete a half marathon to celebrate, so it made perfect sense! 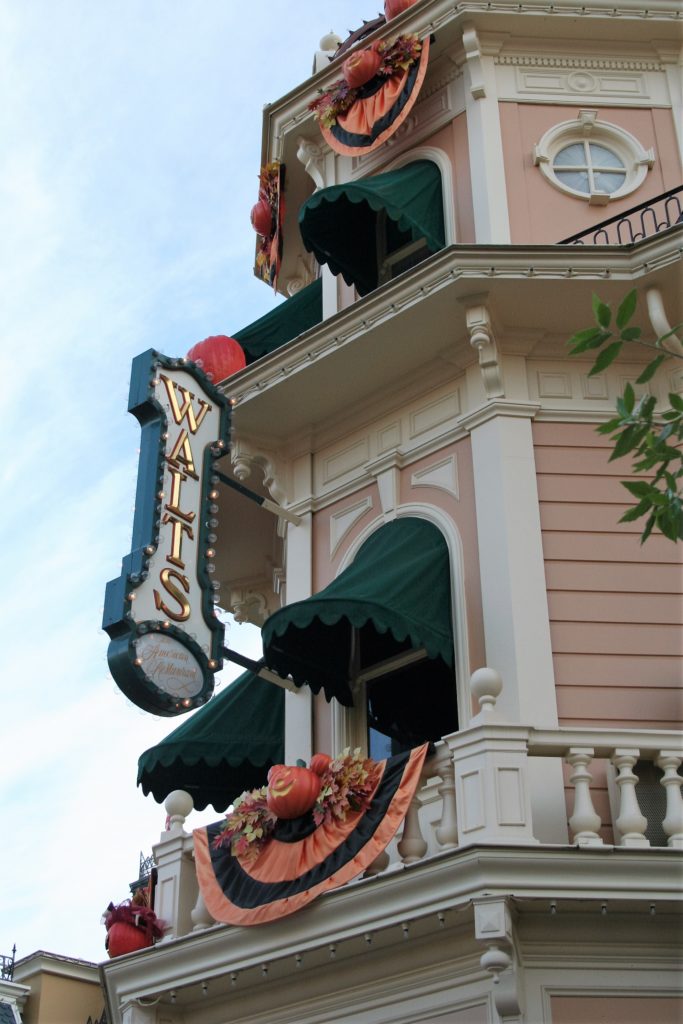 The restaurant is right on Main Street and the inside is absolutely beautiful.  Downstairs there’s some Walt Disney memorabilia and a piano.  Upstairs is the dining area, so if you’re by a window you can look out onto Main Street.  Each room is themed after a land in the park, so there’s a Frontierland room, Discoveryland, Adventureland, and Fantasyland.  We were in the Grand Canyon room, which is right off of Frontierland. 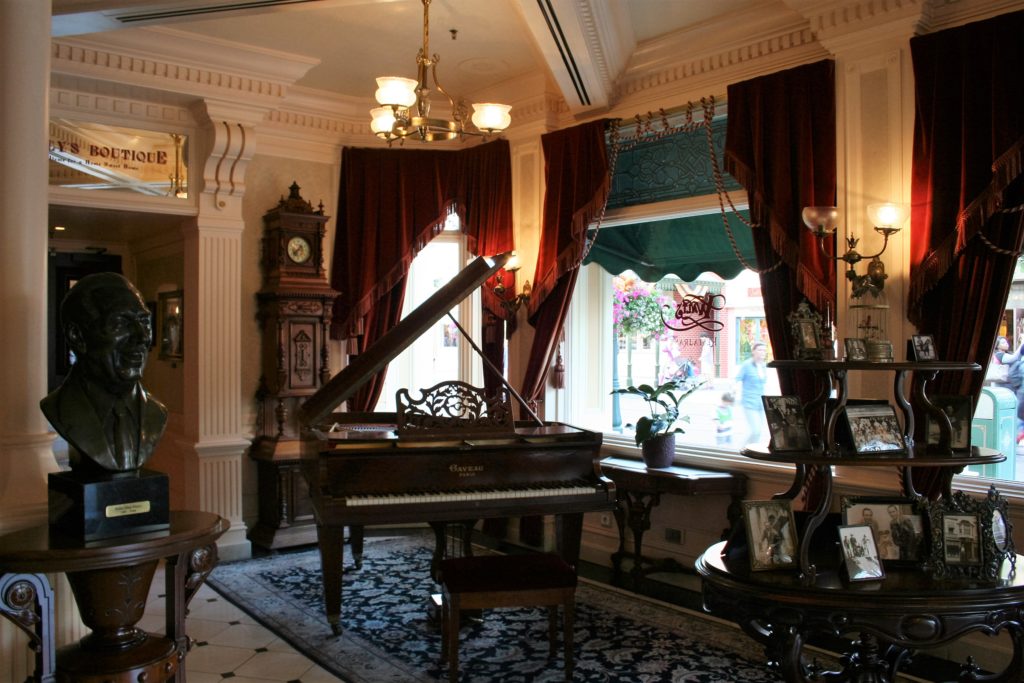 The lobby of Walt’s

The menu features American dishes and while there are a lot of classics they are all upscale versions.  Like many of the restaurants they have some set menus as well as a la carte options.  Once again we decided to go with a menu – if you’re wanting more than just a main course it’s usually worth your money to do a set menu.  I also got a glass of Disneyland Paris champagne with dinner to celebrate the race!  Jason went with the cheaper menu (50 euro for starter, main, and dessert) and I got a signature menu (60 euro).  It was a lot of money but we were celebrating, and in the end it turned out to be worth it! 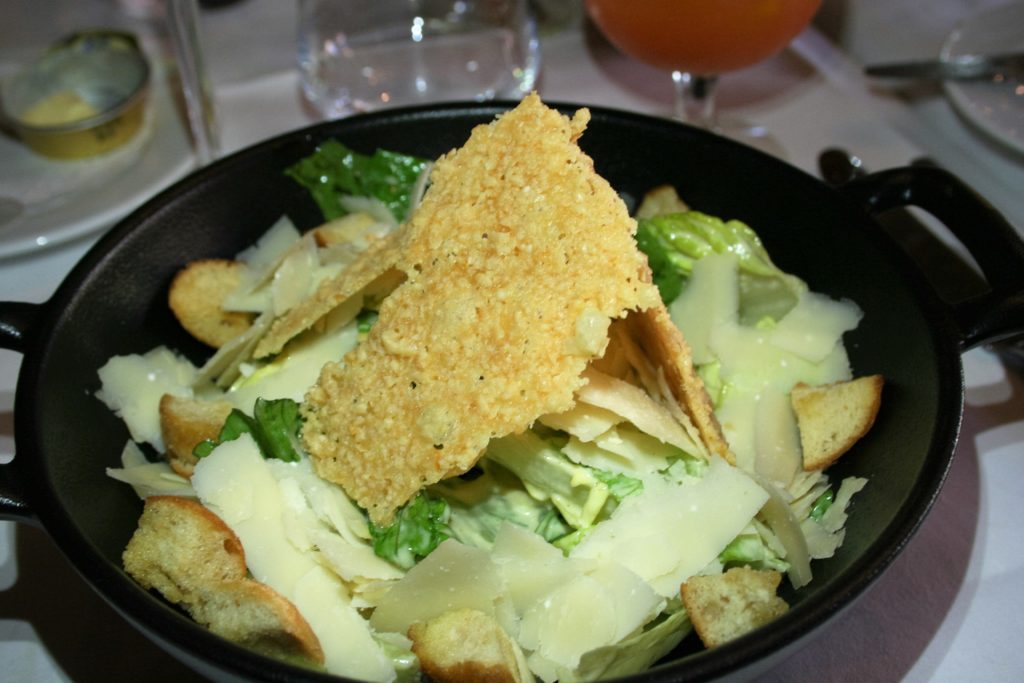 We were dining with friends again who had also completed the half marathon.  They both did the same menu as Jason.  For a starter I got the Caesar salad.  The server warned us that it came with anchovies, so both my friend Megan and I asked for it without the fish!  It was a big bowl and a really yummy Caesar salad.  It had plenty of croutons and cheese (which many places often skimp on) and it also had a Parmesan cracker on top that I really enjoyed. 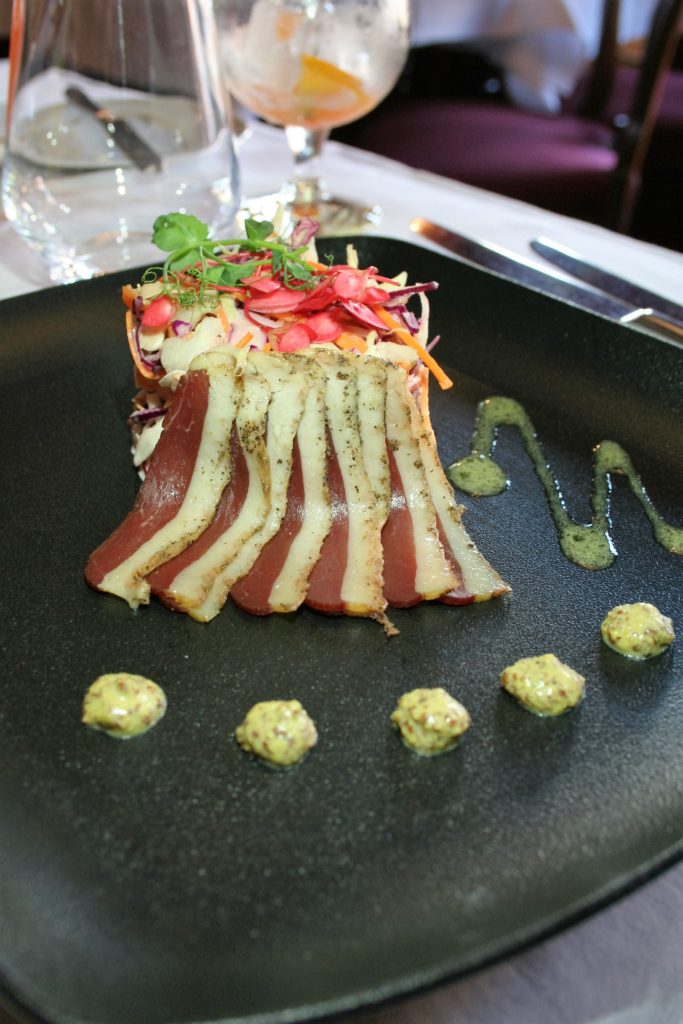 Jason and Chris both got the duck to start.  It came served with a sort of coleslaw as well.  They both loved it and were exclaiming how good it was while they were eating it.  I’m not a huge duck fan but I’m glad they liked it so much.  Jason was only sad there wasn’t more of it! 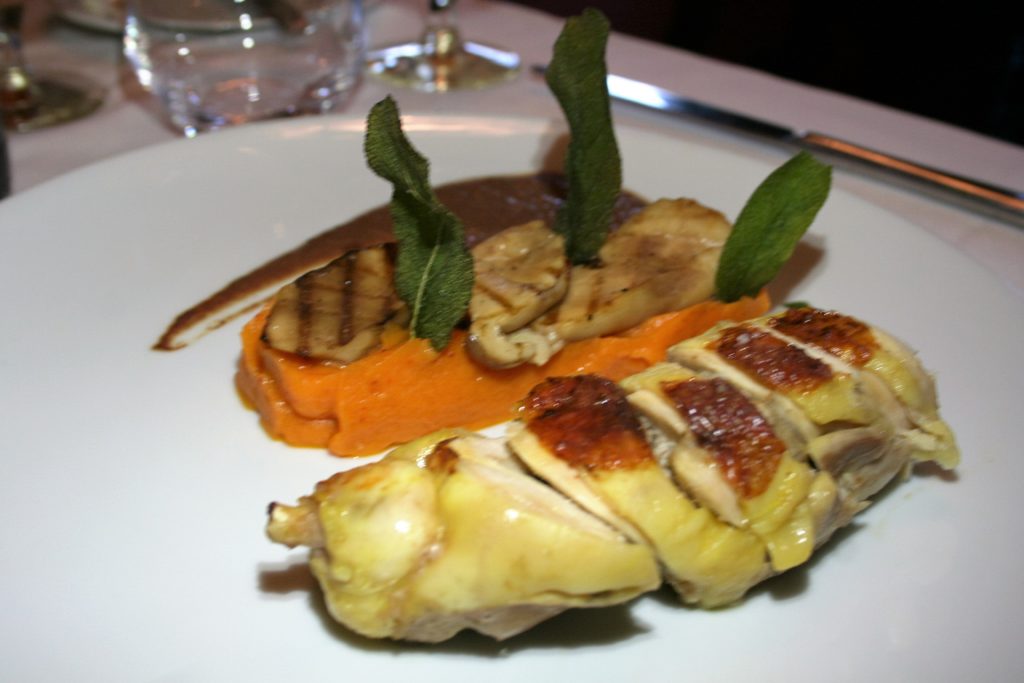 For the main course all 3 of the others got the chicken dish.  It was agreed upon by all that while the chicken was very good, the star of the plate was actually the sweet potato!  Everything looked very good and they all enjoyed it very much. 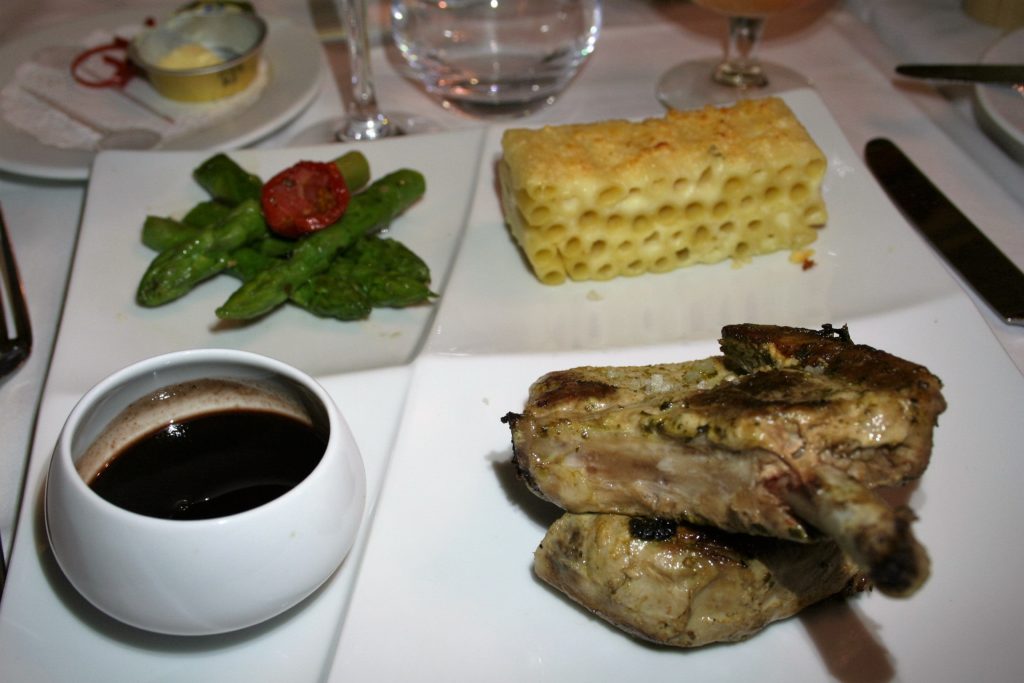 I got the pork, which was basically the reason I went with the more expensive menu.  Apparently I got the last pork dish of the night according to our server!  I’m very glad that worked out because everything on my plate was delicious.  Pork is not my all-time favorite meat but I wanted it because of the sauce described on the menu which sounded interesting.  This cut was well cooked and tasted fantastic with the accompanying coriander sauce.  The asparagus was good and the mac and cheese was not only delicious, the presentation was pretty awesome! 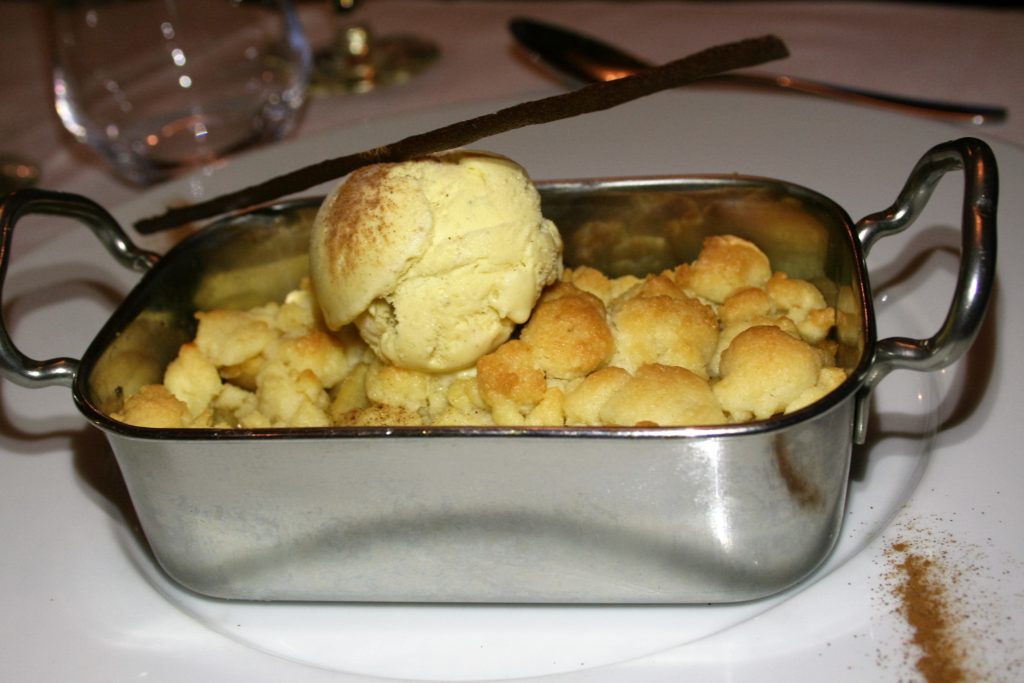 Once again Jason and I ordered different desserts so we could split them.  He (along with Megan and Chris) got the apple cobbler.  It came with vanilla ice cream and was a pretty huge serving!  The cobbler was warm, the ice cream was cold, and it was everything you’d want apple cobbler to be. 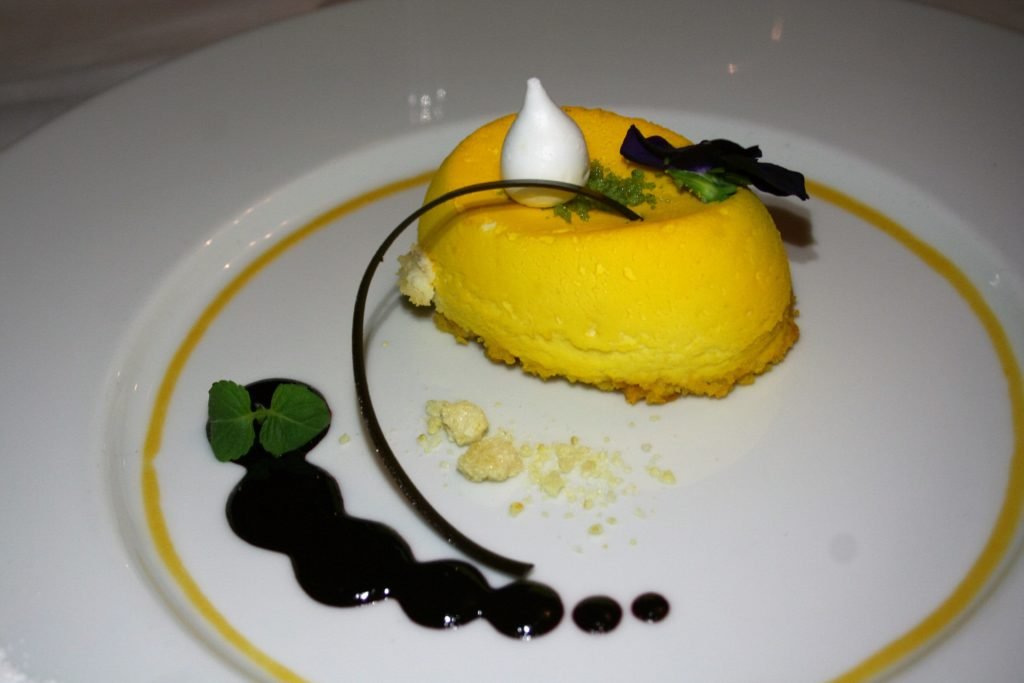 Our server that evening was fantastic.  He warned us that his English wasn’t the best, but he communicated very well.  He was prompt, always checking on us, but also very funny and nice.  We had a great experience. 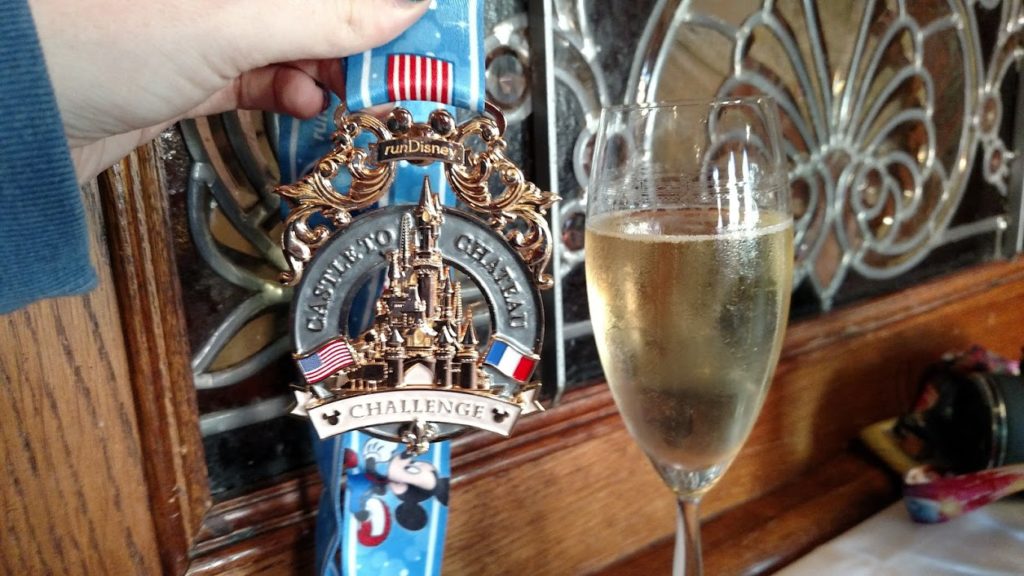 A glass of champagne to celebrate the race!

If I was back in Disneyland Paris I would definitely eat here again.  Despite the high prices it definitely seemed like you get your money’s worth and there are more things on the menu I’d be interested to try!  With the fancy but classic Disney themeing this restaurant was a winner for us.

Which dish from Walt’s American Restaurant looks best to you?