You are here: Home / Disney World / Visiting the Flower and Garden Food Booths

I first visited the Flower and Garden festival in 2013, when they had first added the food booths.  We loved them at the time, so I was very excited to be back in 2015 and planned to snack my way around the World for much of the day.  And they definitely did not disappoint this year!

Mixed Berry tea cocktail – this was so delicious and refreshing.  I know that the booths usually give smaller than usual sized drinks, but for almost $10 I was hoping this might be full size, especially considering that it was a mixed drink.  It was so refreshing and good though, and probably the best alcoholic beverage I had.

Pineapple dog – this was super messy to eat, but a great combination of sweet and spicy.  It sort of fell apart, but scooping up the topping with a fork afterward wasn’t too bad!

Blackberry cider – I love cider and blackberries, so I had high hopes for this.  While it was nice, it wasn’t all that I was expecting. The blackberry flavor was very subtle, and I was hoping for a more bold flavor.

Vegetable naanwich – This was super tasty, and a good combination of flavors.  It’s something I would love to get a full size of for lunch if they offered it year round.  I love that it’s vegetarian too. 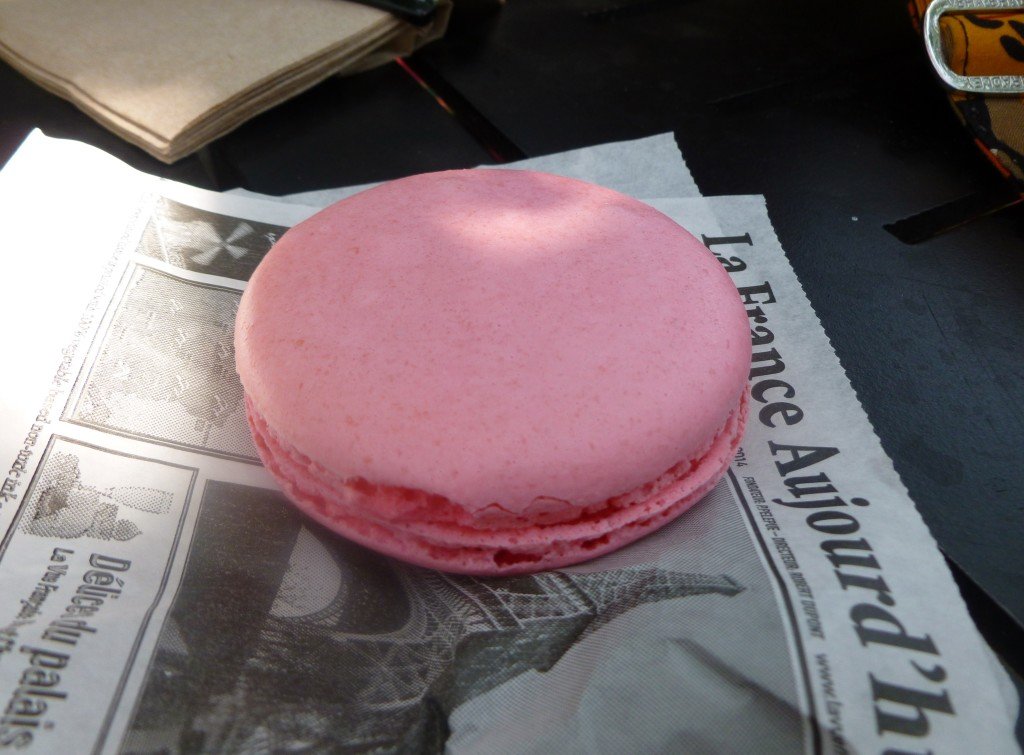 Strawberry maracon:  I love maracons and this did not disappoint.  The sweet marshmallow went well with the differently textured strawberry filling.  Although  will say that I find the ice cream macaron over at Glaces to be superior. 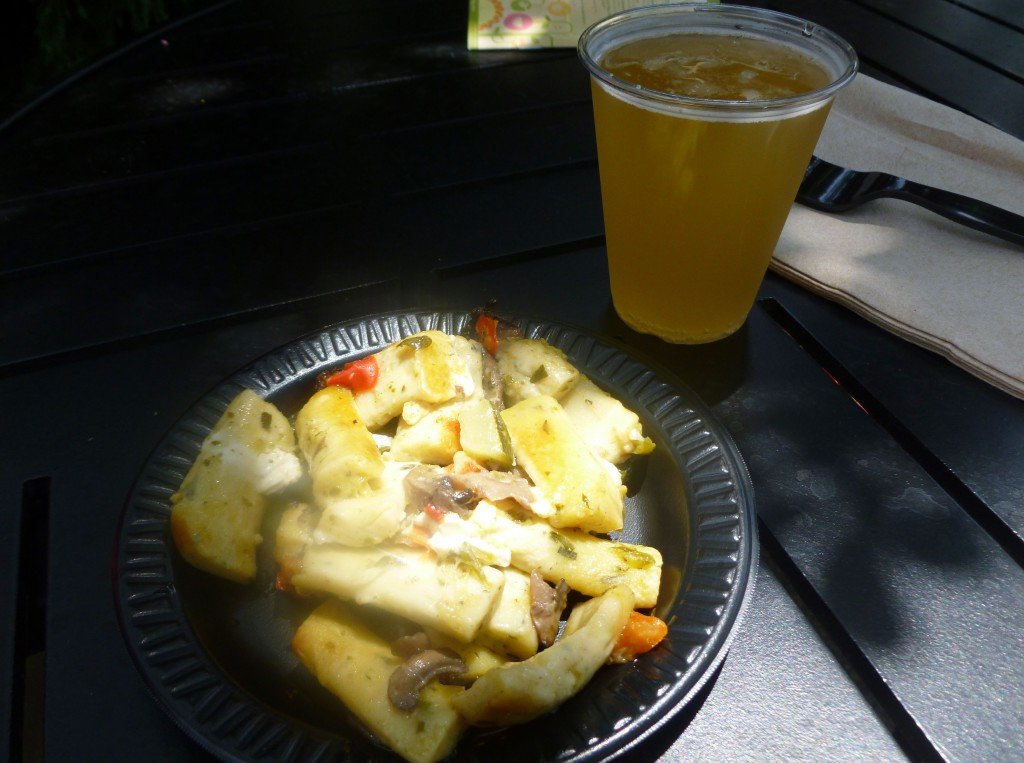 Gnocchi – my friend got this and I took a bite.  I wouldn’t eat the whole thing because I don’t do mushrooms, but it had great flavor to it.  He loved it and said he would definitely eat a whole dish of it as a dinner if it was available.

Beer – this was a nice, light beer.  Nothing super special, but good. 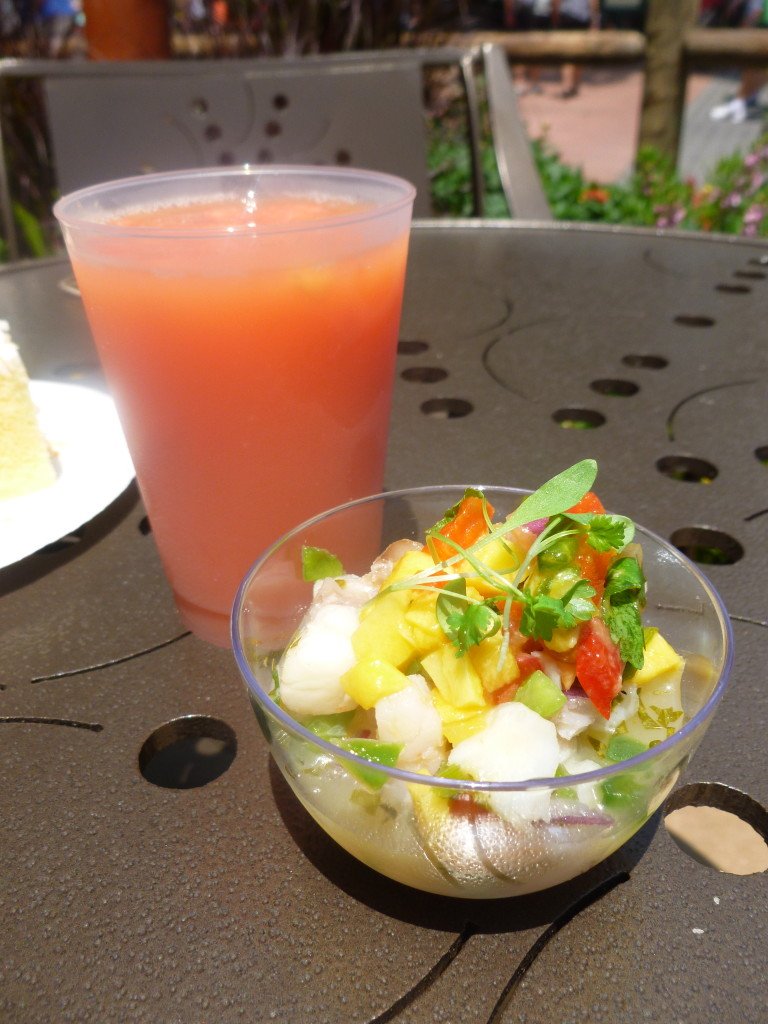 Seafood ceviche – While pretty good, it didn’t quite live up to some of the other things I tried at the festival.  I found the flavor of the cilantro to be really overpowering to the rest of the dish, but there was a nice amount of seafood in it.

La Tizana (non-alcoholic) – this was such a good, refreshing drink!  It was very sweet and I can’t imagine what it would be like with the added orange liquer.  I loved the fact that it had fresh fruit in it as well. 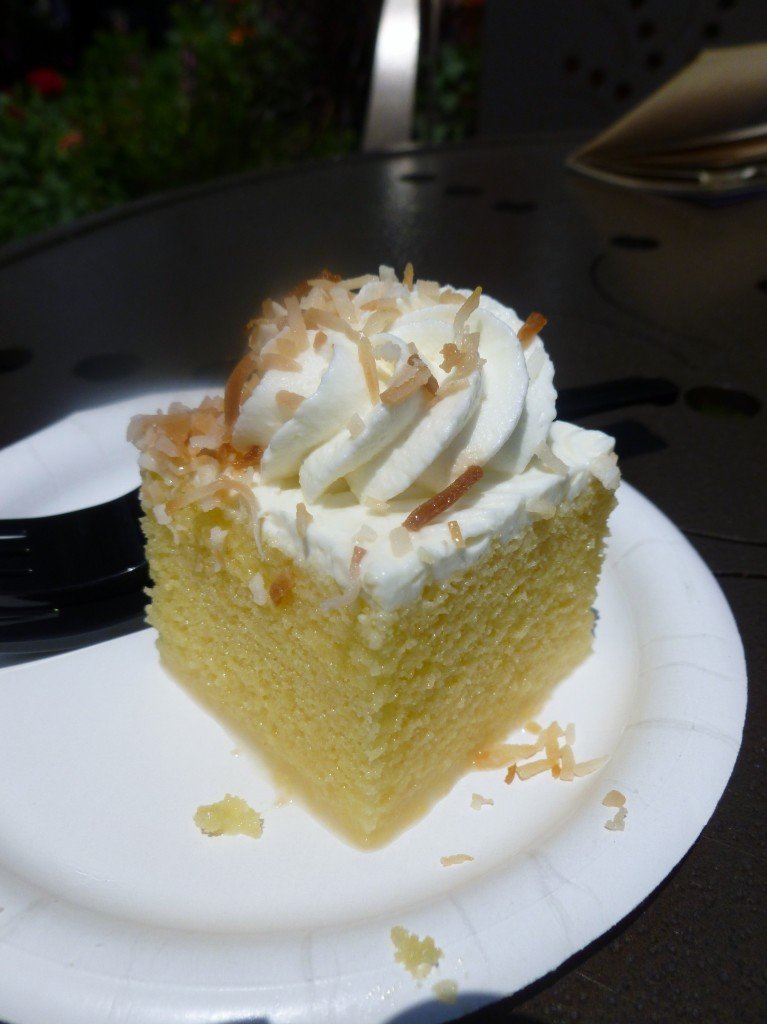 Coconut Tres Leches – this cake is an absolute must if you are a fan of coconut desserts.  It was super moist, sweet, and just delicious. 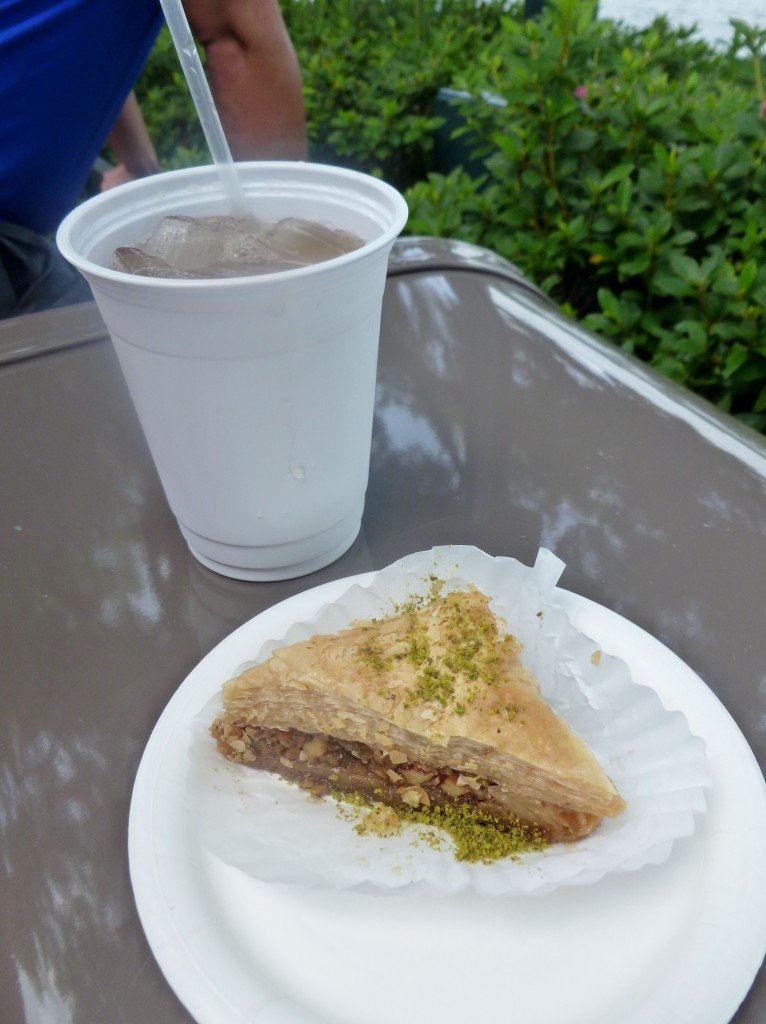 Mint iced tea – this is an unsweetened iced tea, and it tasted like you were drinking just pure liquid mint.  We added some sugar and it helped a bit.  They also filled the cup up completely with ice before pouring in the tea, so we got very little actual beverage.  For me that makes it so that I would not recommend it because you definitely do not get your money’s worth.

Pistachio baklava – It had a really great flavor to it, though I didn’t taste much Pistachio.  Since we shared it we tried to eat it with a knife and fork, and it was really difficult to cut through.  Very good though. 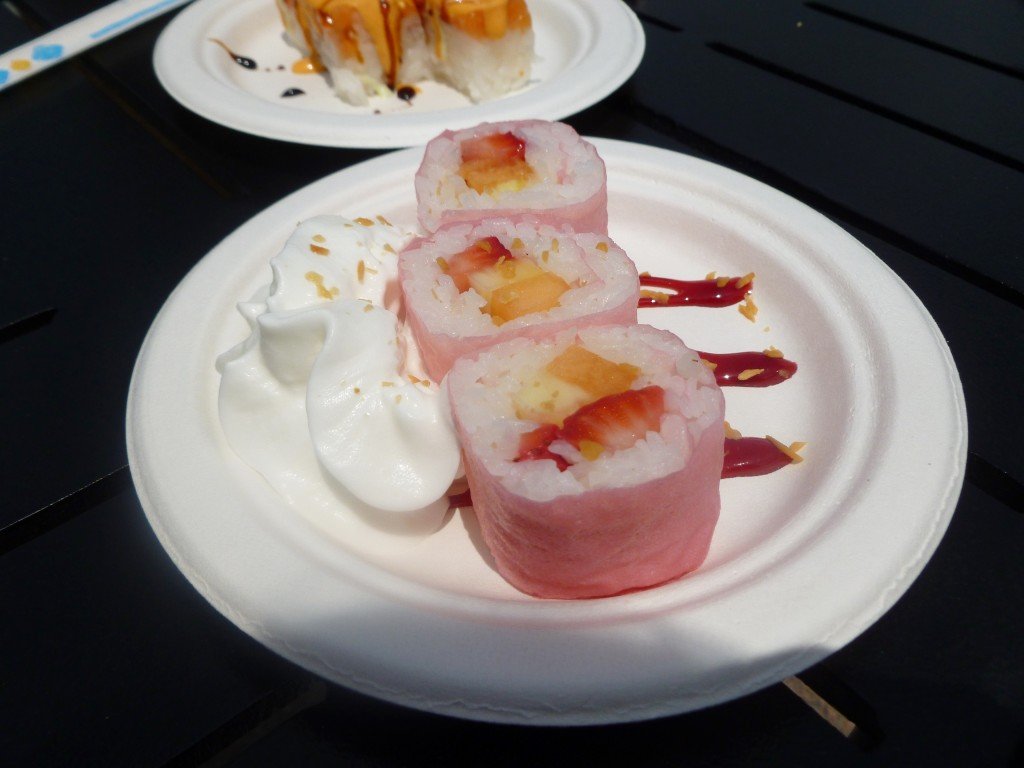 Frushi – I think this was the one thing that was a repeat from 2013, but it’s worth it.  I love the sweet flavors together in a sushi form.  It’s got some great fresh fruit and coconut rice. 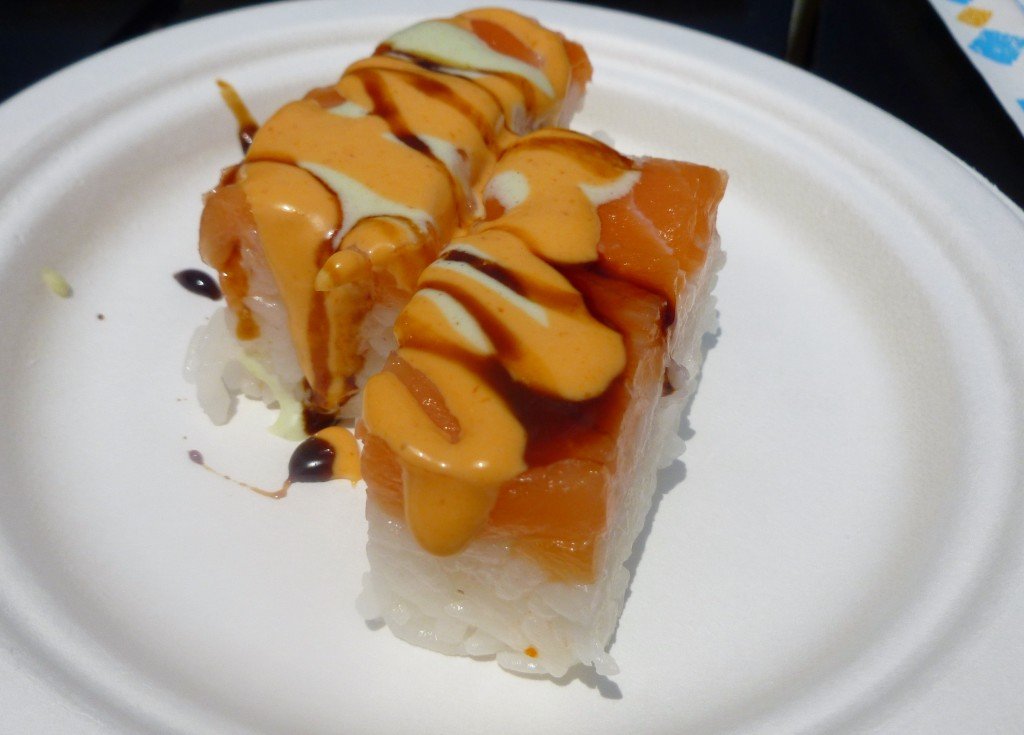 Salmon sushi – It’s kind of standard if you like sushi, but the sauces on top were excellent.  I don’t know if I would get it again because it’s not something that’s very different, but I’m glad I tried it. 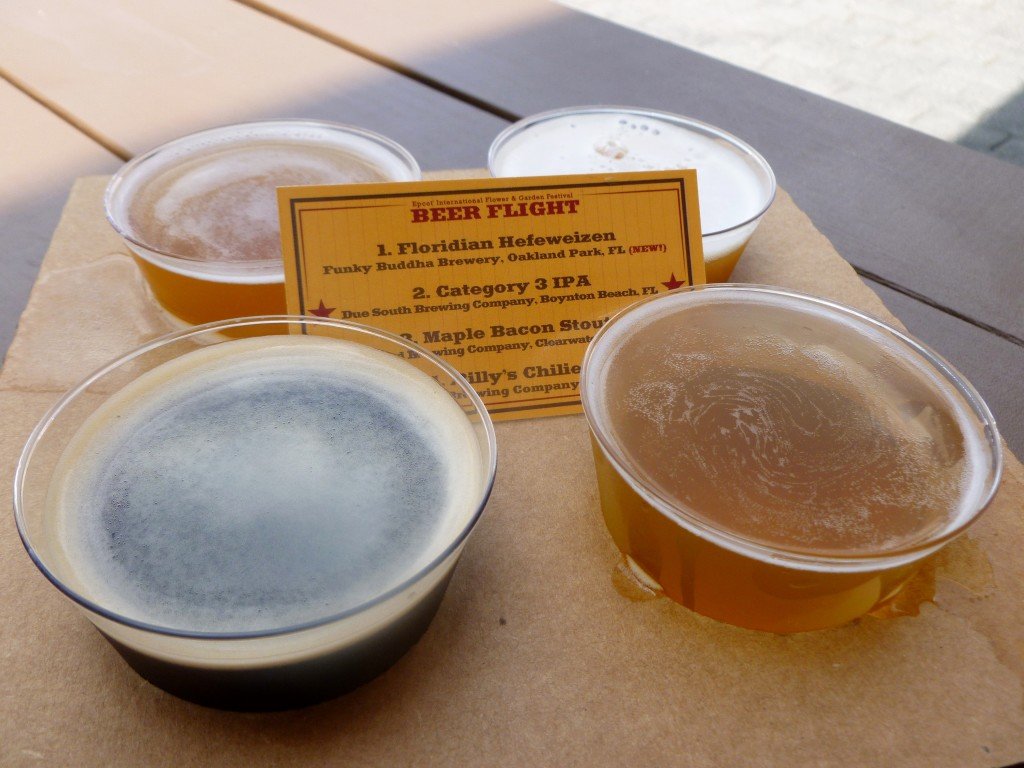 Beer flight – We sampled all the beers here, and they were an interesting mix!  About as different as you can get.  The Floridian was my favorite, with a light, sweeter flavor to it.  The IPA was super hoppy, even for an IPA.  The maple bacon stout was probably the best dark beer I’ve had, and I’m not super into dark beers.  It had a really nice maple/smoky flavor.  And the Billy’s Chiles… well, that was certainly the most unique beer I’ve had.  It had a ridiculously spicy aftertaste!  I’m not one to waste beer, but I couldn’t take more than a few sips.  It feels more like a novelty than something you’d actually drink a whole bottle of. 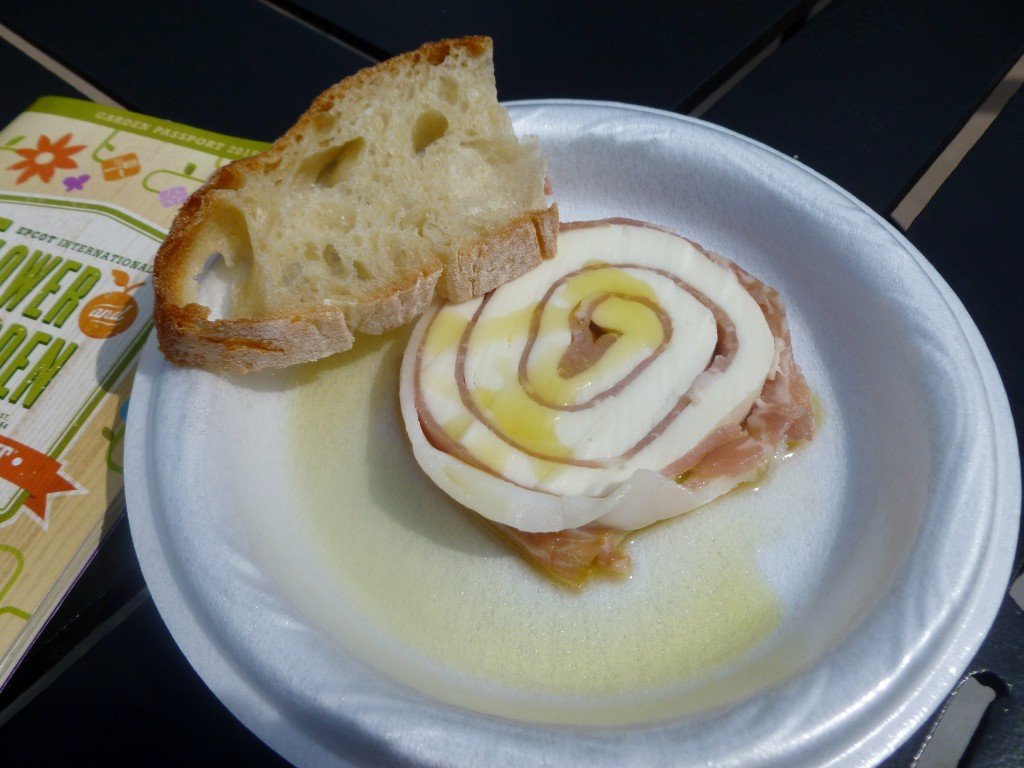 Fior di Latte, Prosciutto e Pane di Casa – this has everything I like: mozzarella, prosciutto, olive oil, and bread.  And it’s no surprise that they all go well together.  My only complaint would be that it felt like a pretty small portion for the price.

Lemon blueberry tart – This was SO GOOD.  I mean, sweet with a hint of tang, and just pure deliciousness in every bite.  Definitely a contender for my favorite item from the booths this year.

Watermelon slush – I really loved the flavor of this as well.  It was sweet but refreshing, and I felt like I could just drink a whole bucket of it. 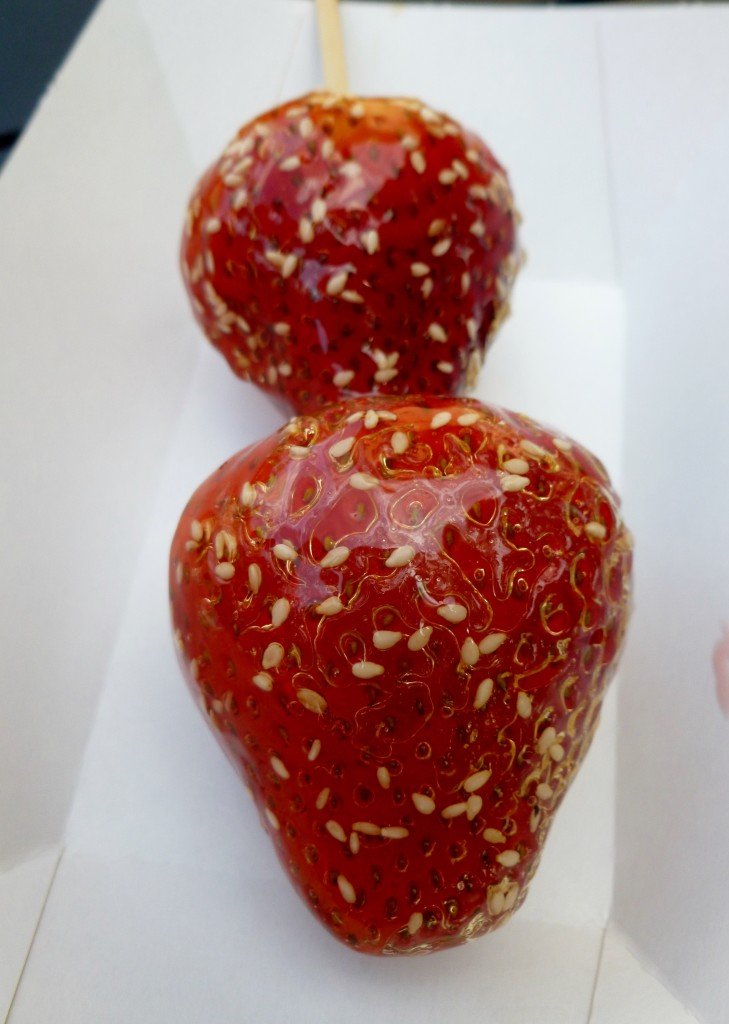 Candied strawberries – These have been around since the food booths began, but I hadn’t tried them until now.  I was missing out!  This was probably my favorite thing I ate all day.  The strawberries were sweet, juicy, and perfect. The candy coating had a great crunch and the wonderful tastes of sugar and sesame.  Put all together and it was just heaven. 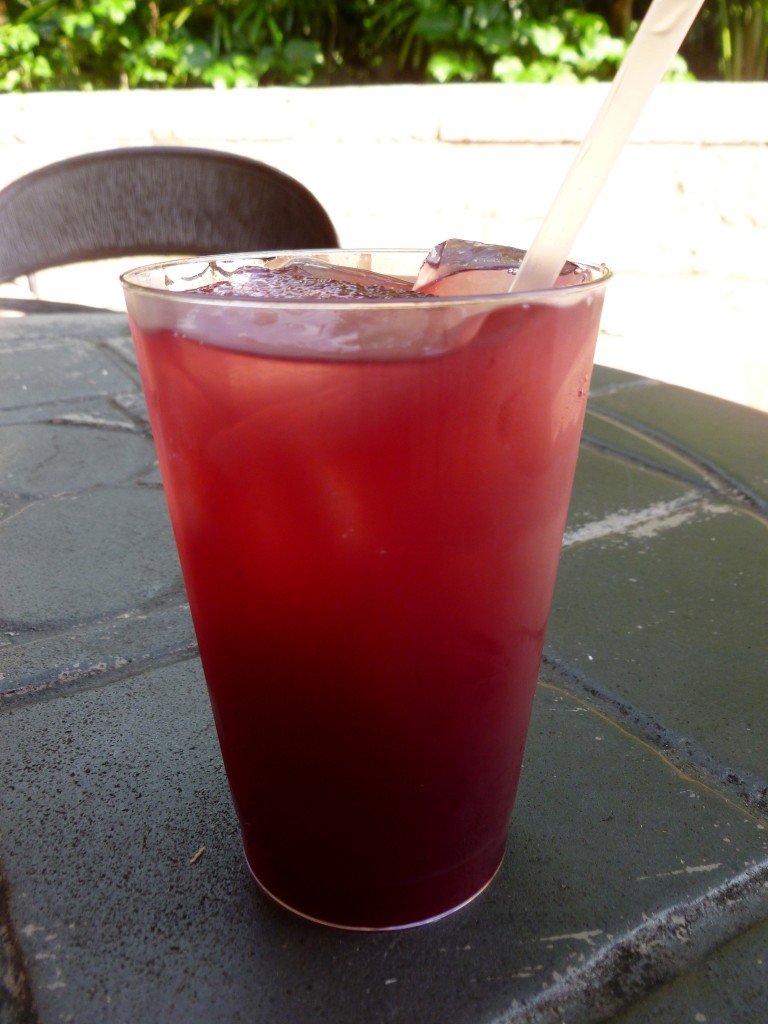 Blueberry Pomegranate Margarita – I love blueberries.  I love pomegranate.  I love margaritas.  How could this go wrong?  Somehow it did, horribly.  The taste of tequila was very strong, and I didn’t really taste any of the fruit flavors I was so hoping for.  Instead along with the tequila I tasted a really sickly, fake fruit taste.  I literally had to force it down because I was not wasting a $9 margarita.

Overall, of the things I tried, here would be my top 5 not to be missed (in no particular order):

Have you been to the Food Booths are Flower and Garden festival?  What’s your favorite?