You are here: Home / Food and Drink / Via Napoli review 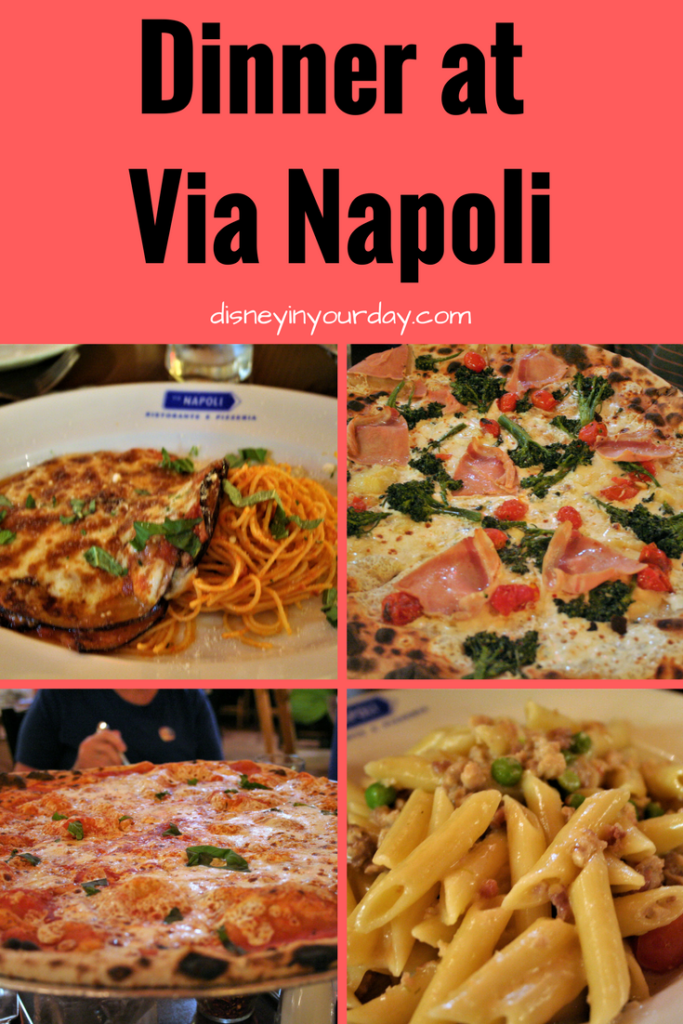 If you’re looking for the best pizza on Disney property, many people will tell you to go to Via Napoli.  It’s one of two Italian restaurants located in Epcot’s World Showcase, and while they have various dishes there the focus at Via Napoli is really on the pizza.  So is it the best? How’s the rest of the food? And is it worth it? A group of 8 of us dined there during our last trip to try it out!

We went here the night before the Enchanted 10k so that we could carb load for the race.  Pizza is a good carb option, of course, but if you prefer pasta they have a number of options as well (and while I’ve enjoyed the pizza at Via Napoli in the past, I went with pasta myself this time around!). 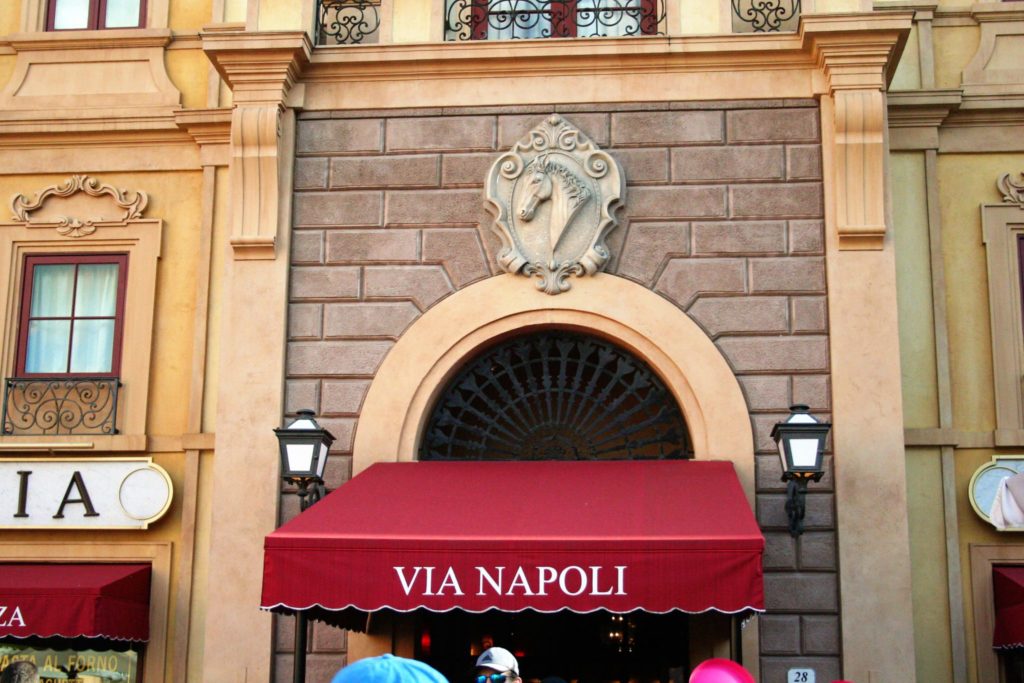 Because it is a popular place, it feels rather chaotic when you walk in.  The waiting area is small and packed, and you’ll also see people trying to get a walk-up table (which, at least this time of year, doesn’t happen).  It’s also one of the Disney restaurants that doesn’t have any electronic form of alerting you that your table is ready. Many of the restaurants have switched to a text message notification, or at least have buzzers. Via Napoli does neither, so you have to hang close to the host stand to hear your name being called.  It’s loud and for me, a little stressful.

Unfortunately the “loud” doesn’t go away once you are actually seated. We were in the main room, which is beautiful with a high ceiling, and also very echo-y.  We had a round table for 8 and you couldn’t really talk or hear anyone other than the people sitting directly next to you.  Instead you hear all the hub-bub of the dining room.  It was bad enough for one friend that she had a headache and said she wouldn’t return to Via Napoli for that reason only.  I think the side room is a bit better, but you can’t guarantee where you sit, especially with such a busy restaurant. So this was definitely the biggest downside of eating here.

One one member of our party got a drink besides water (the downside of running at Disney is that I have to stick to water the day before!). He had the beer sampler.  All of them were very good and it was a nice variety of different beers. 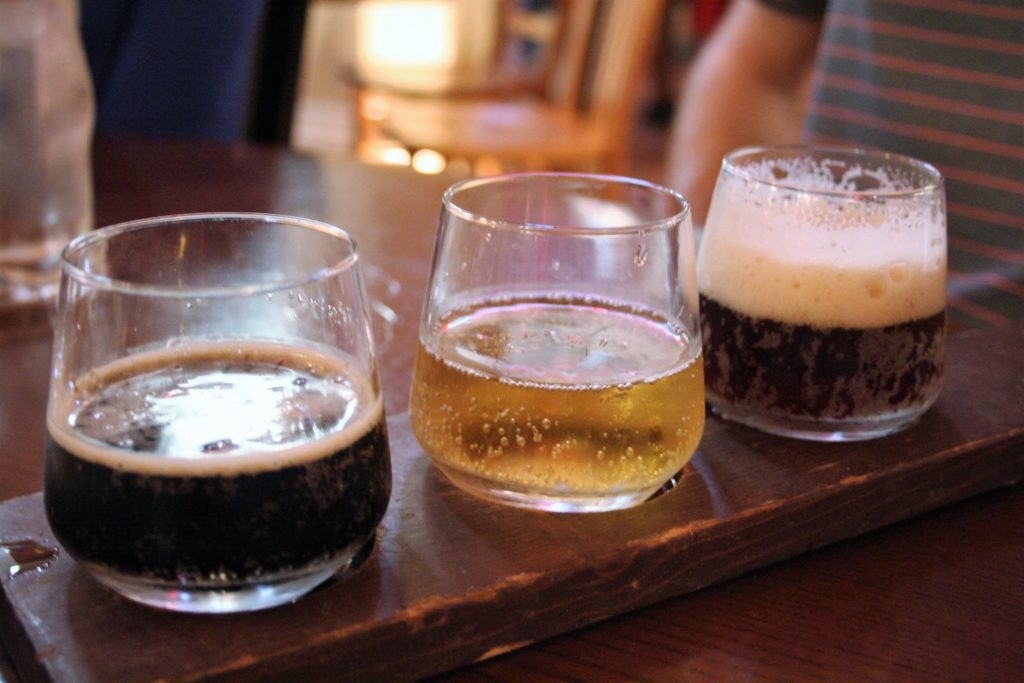 For my entree I went with the Penne Rosate con Pollo (chicken, tomato cream, peas, prosciutto): 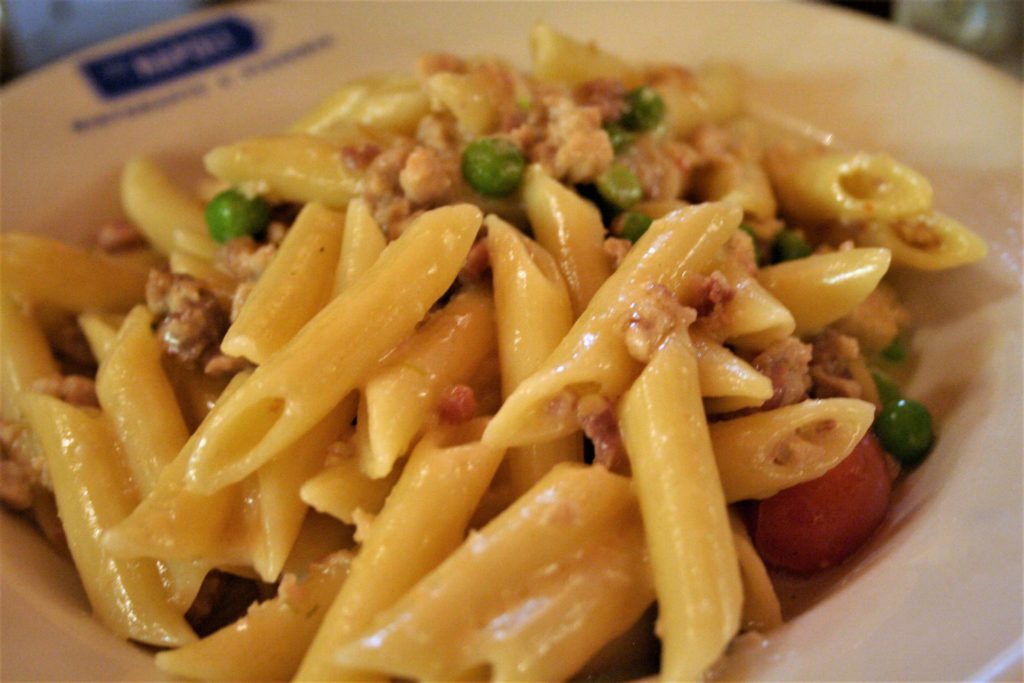 I enjoyed the flavor of this and I will say it was very good. I liked the tomato cream sauce a lot.  The pasta was pretty al dente which you don’t always find in big tourist-directed Italian places.  My one criticism? This is something I never thought I’d say of a pasta dish, but I felt like there wasn’t enough of it!  Normally when I order pasta out it’s a huge dish that I take home half of. Even after eating a few slices of bread I was not only able to finish this entire portion, but I ate a slice of pizza as well. And I’m not one who normally has a big appetite. It’s probably what would be considered a “normal” portion size, but when I’m on vacation and carb loading it’s the one time I’d actually like to eat more 😉 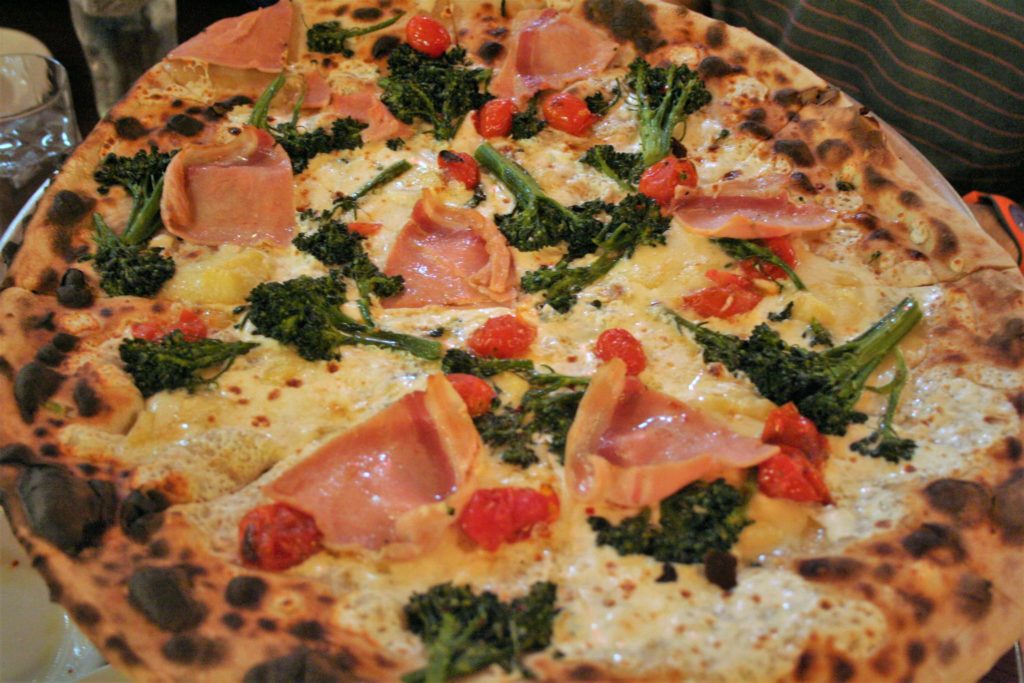 I stole a slice of this one and I thought it was good. I’m a fan of white pizza though, and I think some people were disappointed it was white.  Interestingly, on the menu every other pizza’s description started with “white pizza” or “red sauce.” This one did not say either of those things. Out of the three that had it, one was the friend who was really overwhelmed by the atmosphere and honestly couldn’t think about the food at all.

Jason commented “It was tasty, very recognizably a gourmet pizza. But not especially unique gourmet pizza. I enjoyed it at the time but couldn’t tell you anything distinct about it now, which is probably telling about how it stands out from other gourmet pizzas I’ve had.” 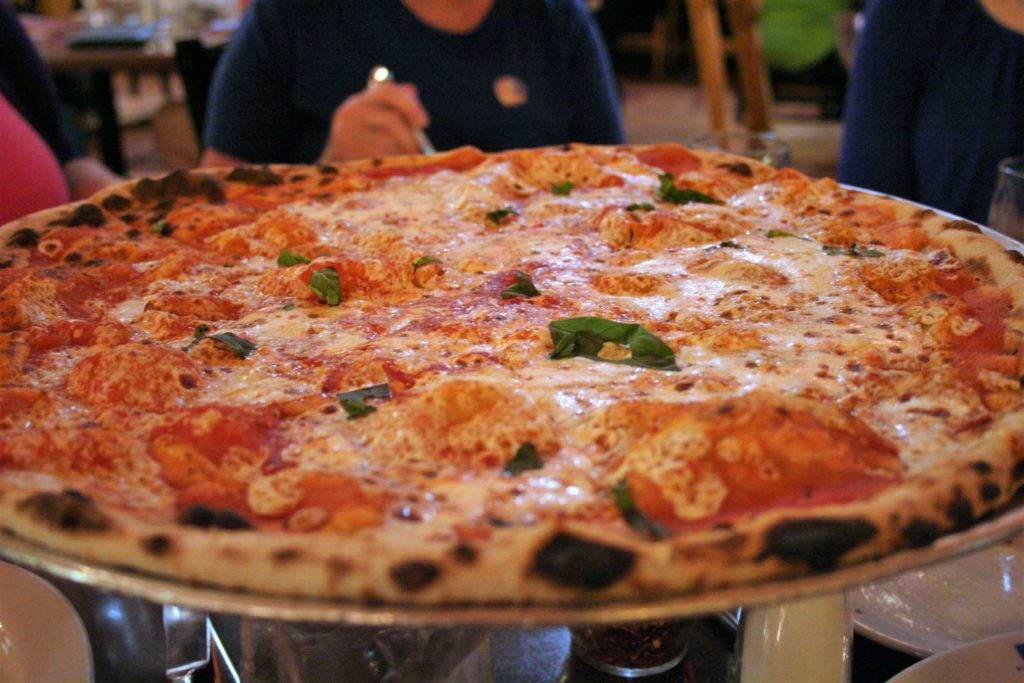 It was described as light and refreshing.  Though it’s the most simple pizza you can order at Via Napoli, it’s done very well.  A good ratio of tomato sauce and cheese, and a well cooked crust. With two people there were leftovers which we took back to the room, though with so much food in a trip I’m not sure anyone ever got to it!

Finally, one more member of our party ordered a non-pizza entree.  She enjoyed the Tortino di Melanzane (eggplant, tomato, parmesan, and mozzarella served with spaghetti pomodoro): 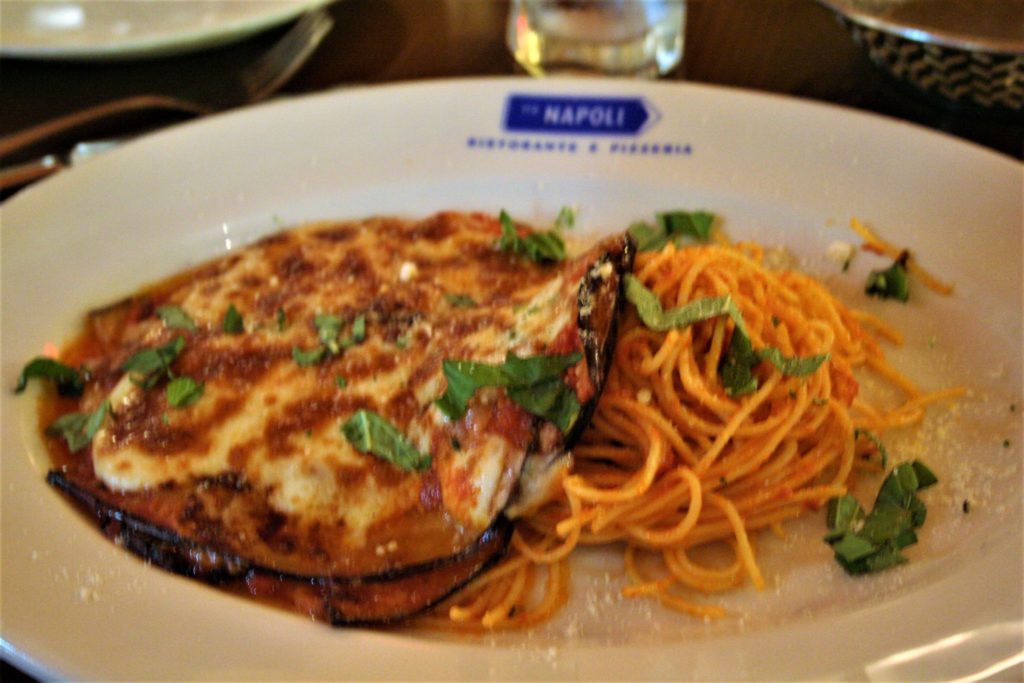 She liked this a lot. It was an excellent eggplant parm and there was plenty of it. A solid choice at Via Napoli.

They also gave us a small birthday treat for our friend who was celebrating his birthday! 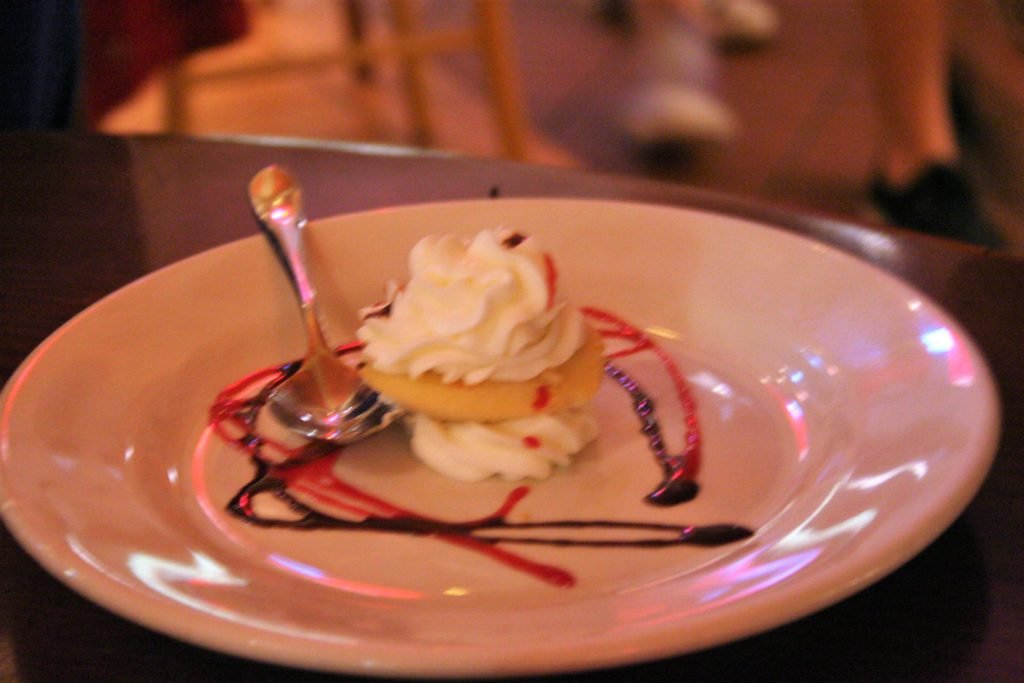 So my summary – I think the pizza itself at Via Napoli is worth it, but I’m not sure the atmosphere is.  The pizza is very good and they have a lot of unique options. On a past trip I tried the prosciutto and melon pizza and loved it.  If you get people to split a large pizza, it can also be a very affordable meal in Disney. 3 people sharing a large pie worked out to be about $10 each, which is less than a lot of counter service meals.  But you have to be up for a noisy, chaotic atmosphere. If you’re looking for a quieter place to relax from the parks, I’d consider going elsewhere.  I will probably come back to Via Napoli eventually because I do really like their pizza, but it’s not at the top of my list of places I “need” to go.

Have you been to Via Napoli? What do you think of it here?