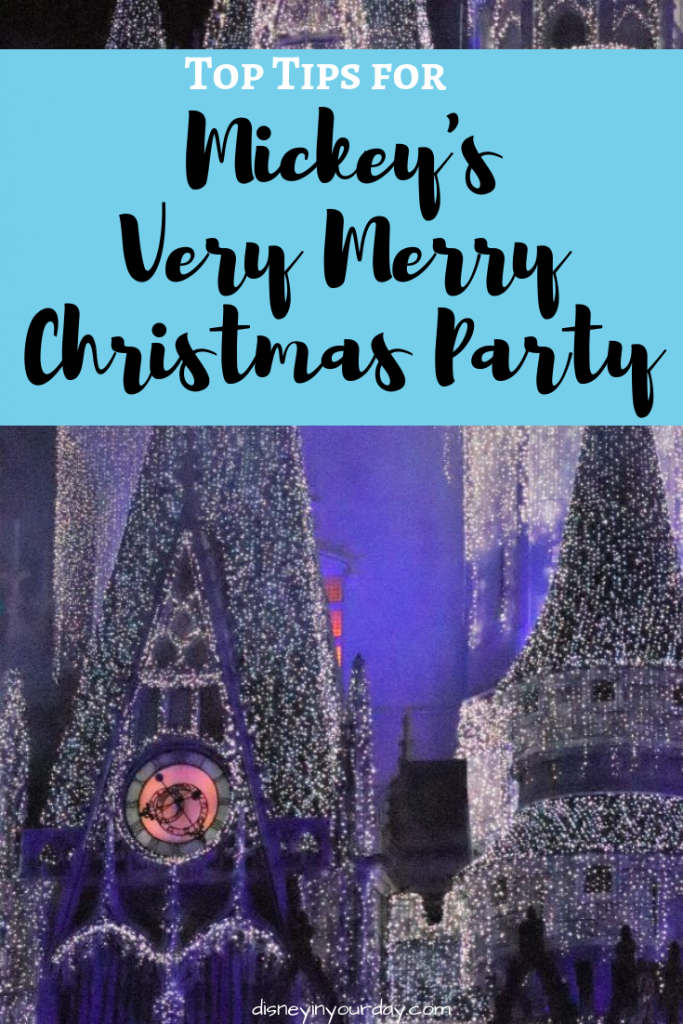 This year was my 4th time attending Mickey’s Very Merry Christmas Party (I’ve also attended Mickey’s Not So Scary Halloween Party twice, which is similar).  While the party is a lot of fun and there are tons of special things going on – like snow on Main Street! – it’s definitely gotten more crowded and more expensive throughout the years. So if you’re planning on attending, or even thinking about it, these are my top tips for Mickey’s Very Merry Christmas Party and making the experience worthwhile! 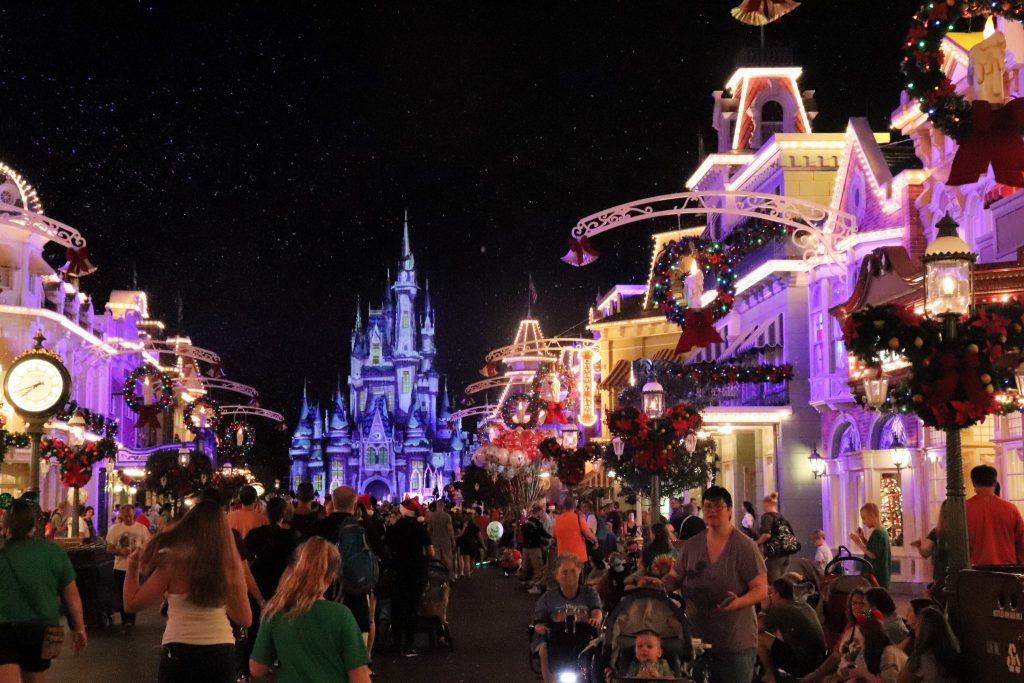 Don’t expect to do everything

It’s easy to look at the events happening at Mickey’s Very Merry Christmas Party and think that you can hit them all up if you plan right.  You have from 7pm-midnight, which sounds like a lot of time. But once you get there that time goes very quickly!  Especially if you want to meet characters – some of those waits can span an hour or more.  Watching certain shows means grabbing a spot early, which also eats up your time.  So don’t stress yourself out by trying to do everything.

Since you don’t expect to do everything, it’s important to set your priorities so you can hit the things that are most important to you!  Pick a few shows or events and get to them early.  Select a couple of characters you’d like to visit with.  If you pick maybe 2-3 things that are your “must dos” then you can plan and those. Anything else is just a bonus and you don’t have to get stressed or frustrated if you can’t get to everything. 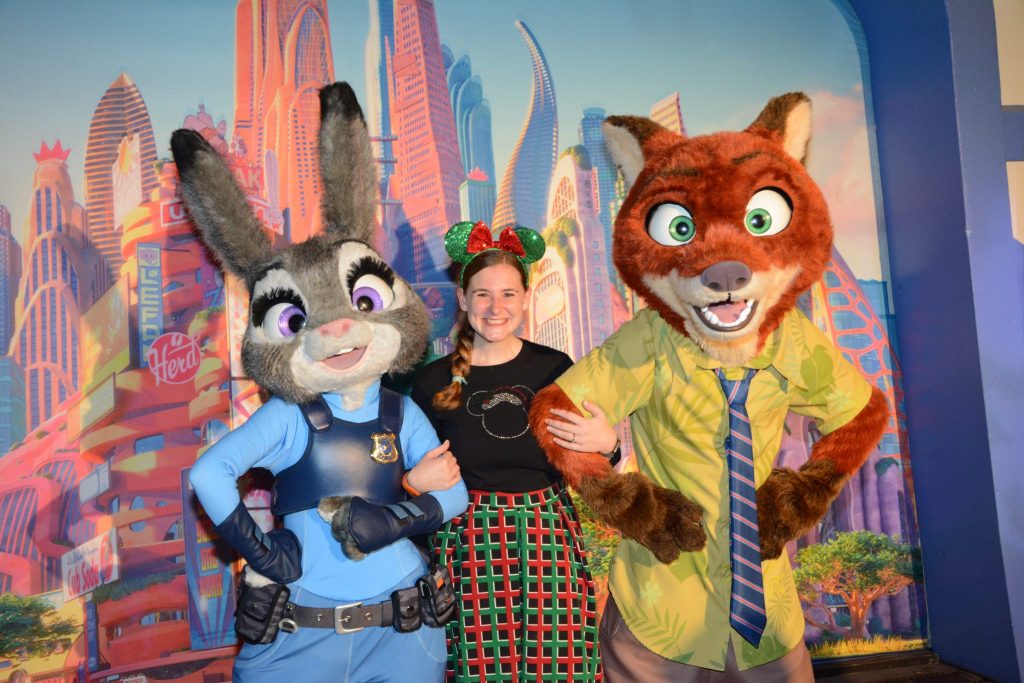 Line up early for the most popular characters

Some characters have much longer waits than others, so line up early.  This is especially true for the 7 Dwarfs and Jack and Sally.  Some of the characters will start their meets earlier than 7:00 too.  Jack and Sally started meeting around 4:30 this year, so take advantage of that time before the party events officially begin if they’re on your list.  We lined up for Nick and Judy around 6:00 and they came out at 6:30 so we didn’t have to wait too long for them.  But these characters can eat up a lot of your party time, so keep that in mind.

Consider watching the parade from Frontierland

Main Street is a great backdrop for watching the parade, with the ice castle and the snow falling.  But it’s also super crowded because everyone wants to be there.  If you don’t want to fight the crowds but still want a good parade spot, try watching from Frontierland. We found a spot there only about 15 minutes before the parade started and we were right in the front. It was so much more enjoyable that way. 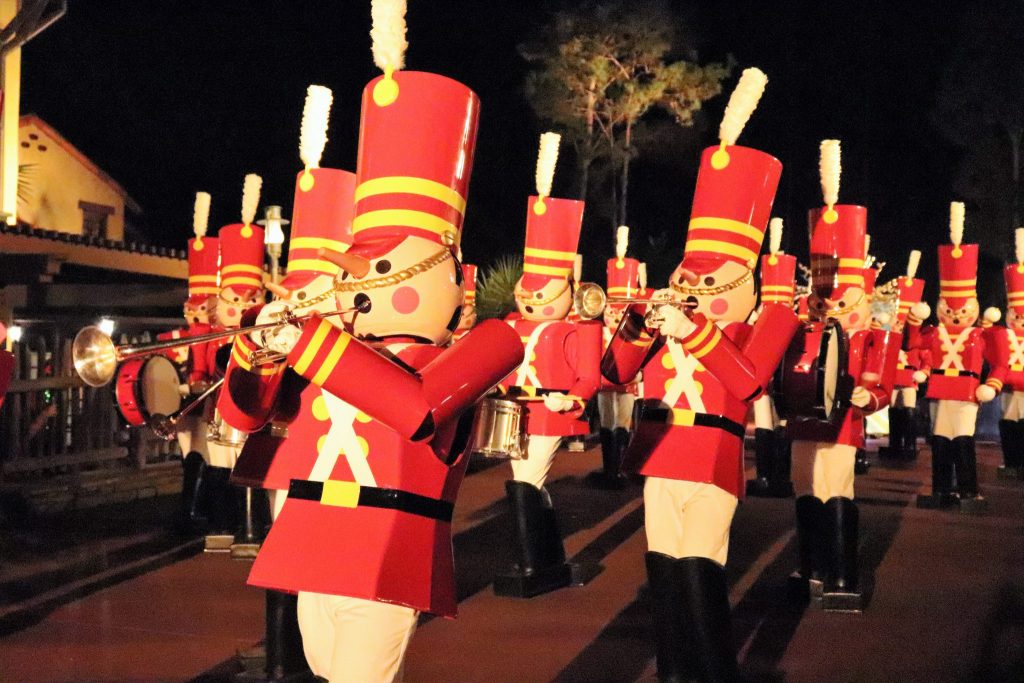 The first parade is more crowded, so the second one can be a better time to catch it.  The second parade doesn’t start until 11, so a lot of families with younger children watch the first one and then leave after the fireworks.  If you’re not too picky about the parade but you still want to see it, go to the second parade and catch it in Frontierland!

If you really want to see any of the castle stage shows, get a spot early so you can be right towards the front.  If you’re not super close odds are you won’t actually be able to see much of anything, as everyone hauls their kids up on their shoulders in front of you (or holds their phones up to take crappy video, etc.).  Even showing up 15-20 minutes before the show started it was impossible to get a good spot and we literally could not see almost anything happening on the stage. If you can’t see the show, what’s the point?  If you can’t get a good spot I’d suggest just skipping the show entirely and using that time to do other things, like ride something or grab a treat.

Holiday Wishes is a different story – since the fireworks are up in the sky you can get a good view from many spots.  If a view directly in front of the castle is important to you, get that spot early on Main Street (which means getting a good spot early for the first parade so you can jump into place once the parade ends).  If you’re not as picky about the view consider something off to the side – you can still see pretty much everything and a lot of the castle, and it was great from where we watched it in front of Crystal Palace! 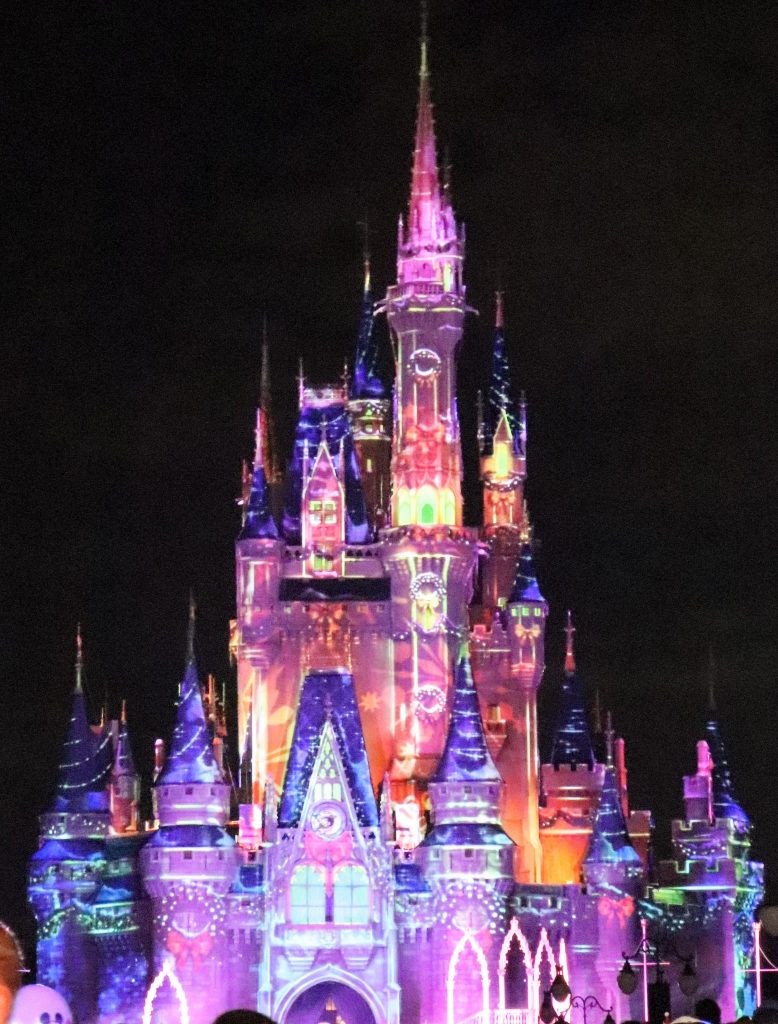 Whether you’re going to do a table service meal or quick service, I recommend eating early so you don’t have to spend party time eating dinner.  Even if you don’t have a regular park ticket for day you can get into the park starting at 4pm, so if you’re looking at reservations do it for 4:30 or 5:00. That way you can be done by 6pm and then you can start lining up for characters or get ready for other party activities!

Free cookies, hot cocoa, and other treats are available during the party – every location has something different, so if you want to try them all make sure to visit different spots! This year we found things like sugar cookies, chocolate chip, soft pretzels, and sno-cones. 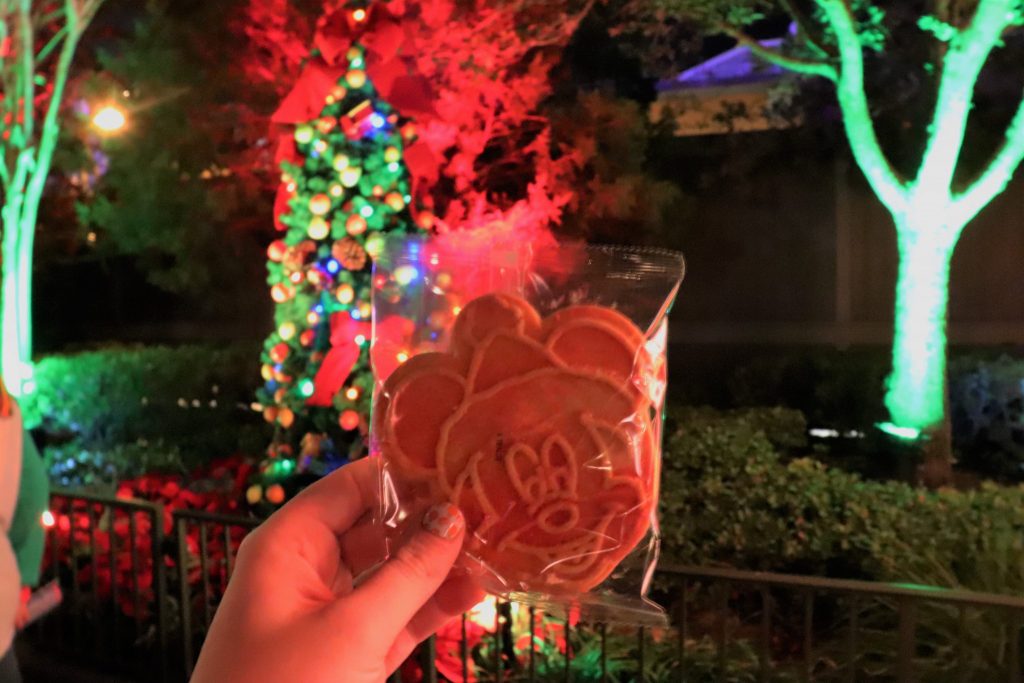 The party starts at 7pm, but you can get in at 4pm

All of the party events start at 7pm, but your ticket will get you into Magic Kingdom starting at 4pm. That means even if you don’t have a park ticket for that day you can spend 3 extra hours in the park. Maybe doing some rides or eating dinner.

Do some rides (to get off your feet!)

All of the party events are a ton of fun, but the waits for the rides are pretty short at this point! 7 Dwarfs Mine Train was the only thing that saw a significant wait time.  We did Pirates of the Caribbean and Haunted Mansion with pretty much zero wait time.  We also found the rides were nice for a little sitting break, because most of the party is standing. 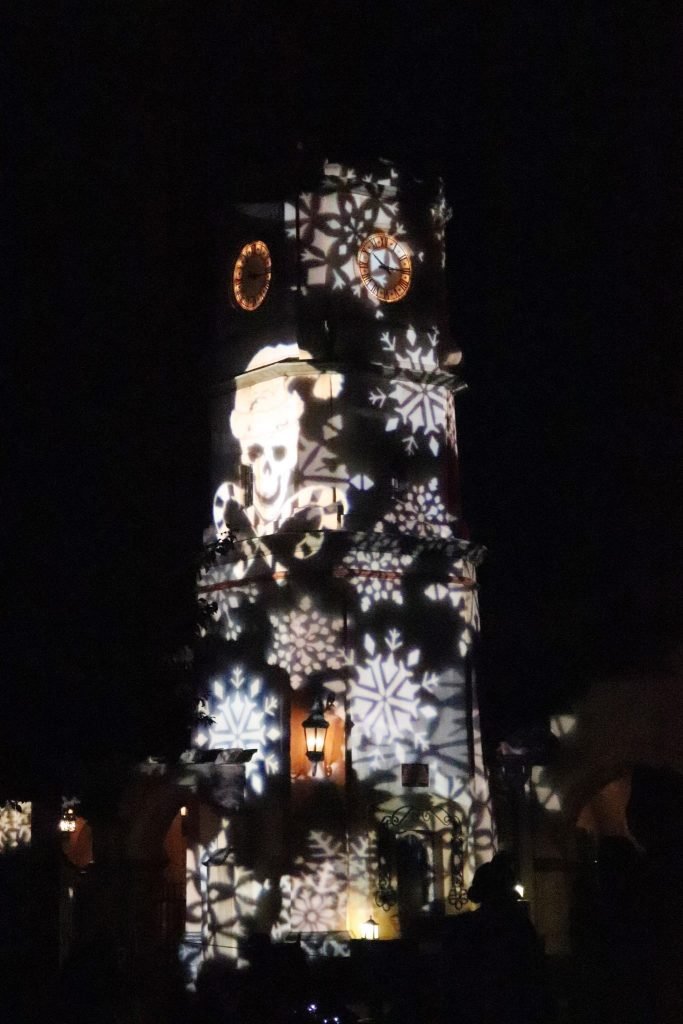 Take it easy during the day

It might be a party, but it can be a difficult experience on the body!  It’s a lot of standing around and waiting – for characters, shows, and parades.  If you try to do a theme park all day during the day you will be exhausted. And if you want to get the most of your party time you want to try and make it to midnight! So take it easy, and consider a nap or a rest break in the afternoon.

People always think there will be low crowds during the Christmas Party because they sell less tickets for it than they do on a regular day. And while that’s true, just because there are less people doesn’t mean it’s actually less crowded.  The party still feels like wall to wall people because all the people who are attending are in the same general areas (mostly Main Street). So it’s just as or more crowded for the fireworks, parade, etc. as it would be on a regular day.  You can usually find lower waits for the attractions though because people are going to the events or character meets. 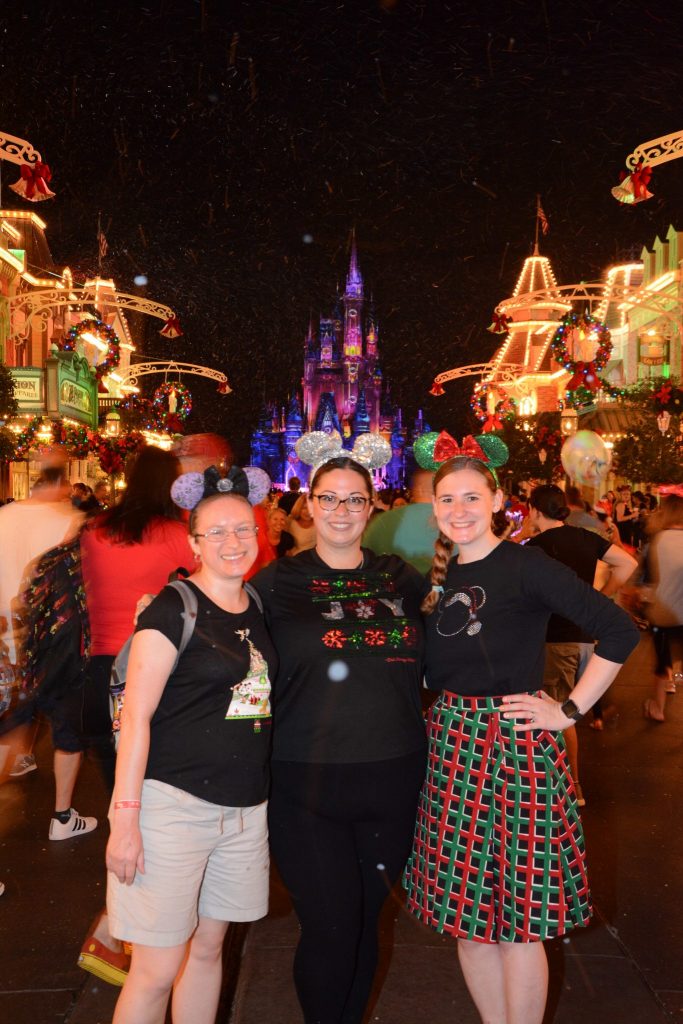 Check the weather to dress appropriately

I’ve noticed that people generally tend to overdress or underdress for the Christmas Party.  There’s the group that says “it’s Florida, it’s going to be so hot!” and then the group that says, “it’s December, it’s going to be cold!”  My biggest tip – just check the weather before you leave, and even the day of and adjust your clothing as necessary. It can be super warm in Orlando that time of year, and it can also be quite chilly.  There are days when you’ll want a tank top and shorts, and days when you’ll want a hoodie. So be prepared!

Get a free exclusive Sorcerer’s card

If you play Sorcerer’s of the Magic Kingdom, you can get a free card that is exclusive to the Christmas Party! Even if you don’t play, stop by and grab one and give the game a try! 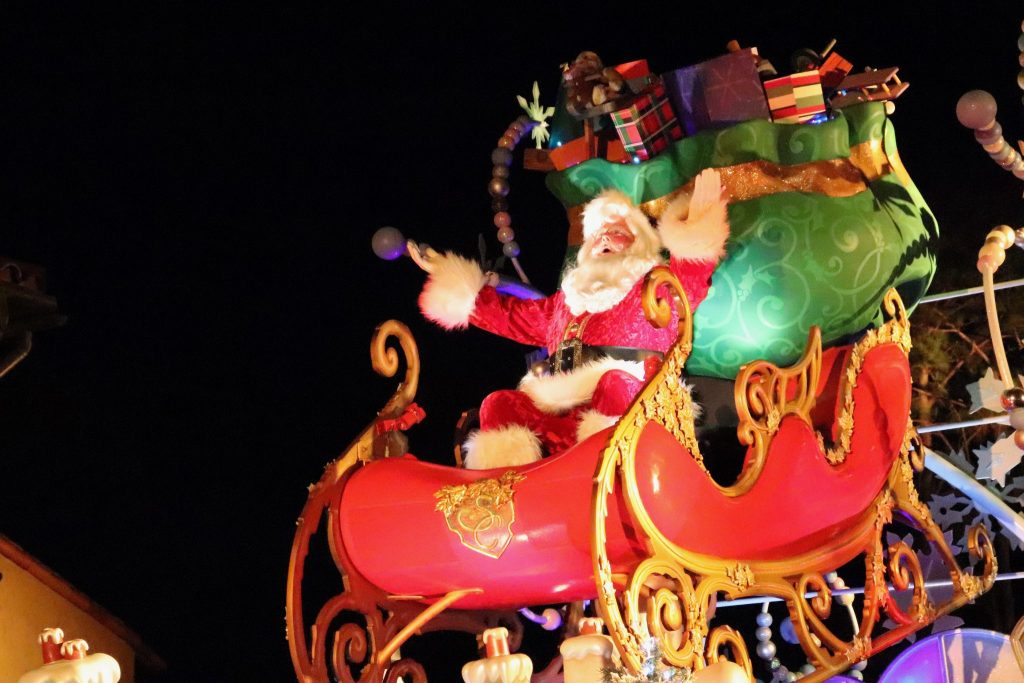 Decide if what you get is really worth it to you

Finally, do some research, think about it, and decide if the Christmas Party is really worth it to you. It’s certainly not cheap – you’re looking at most likely $100+ per person.  If you’re interested I’d suggest you give it a try at least once, because it truly is a unique experience! But if you’re uncertain or you’ve done it in the past, consider what you get and if that price is really worth it to you. Everyone is different, and only you can decide that!

Have you been to Mickey’s Very Merry Christmas Party? What would be your top tip?