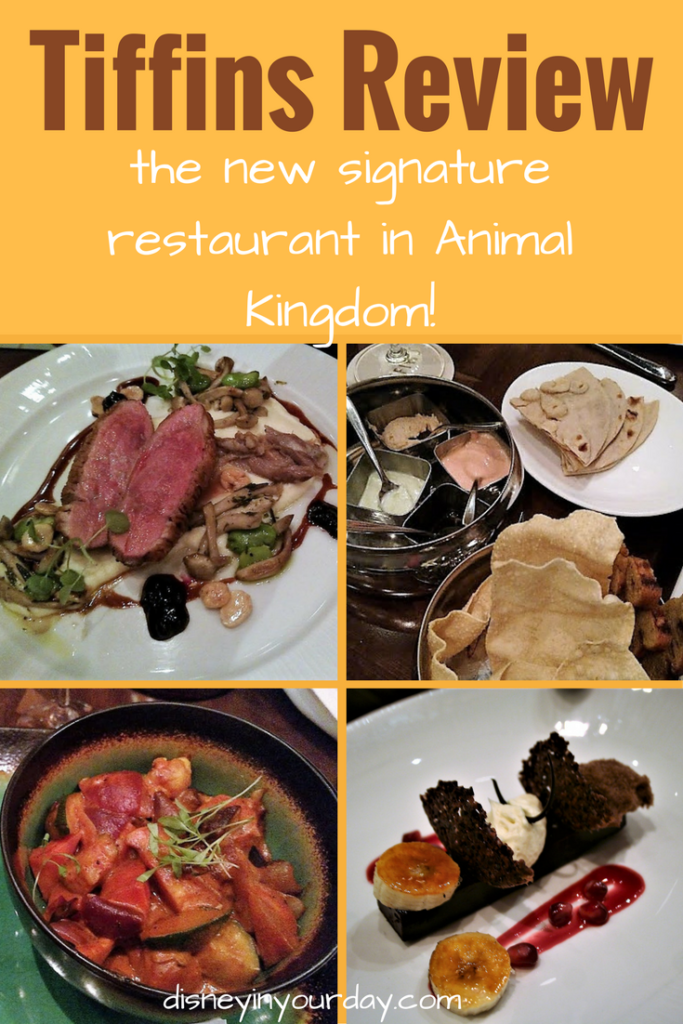 One of the newest restaurants to open in Disney World is called Tiffins, a signature dining restaurant located in the Animal Kingdom.  I love trying new and exotic foods, and African/Indian spices are some of my favorites.  So when I heard about Tiffins, it was at the top of my list as places I wanted to try.  When it came time to pick where I wanted to have my marathon celebration dinner, I knew it would be Tiffins.

Though I was sick for most of the trip, I was fortunate in the fact that Sunday night was probably the time when I had the most appetite (considering I’d just run 26.2 miles that morning, it kind of makes sense!).  I hadn’t been able to eat much throughout the trip due to being ill, but I certainly gave it my best shot at Tiffins. 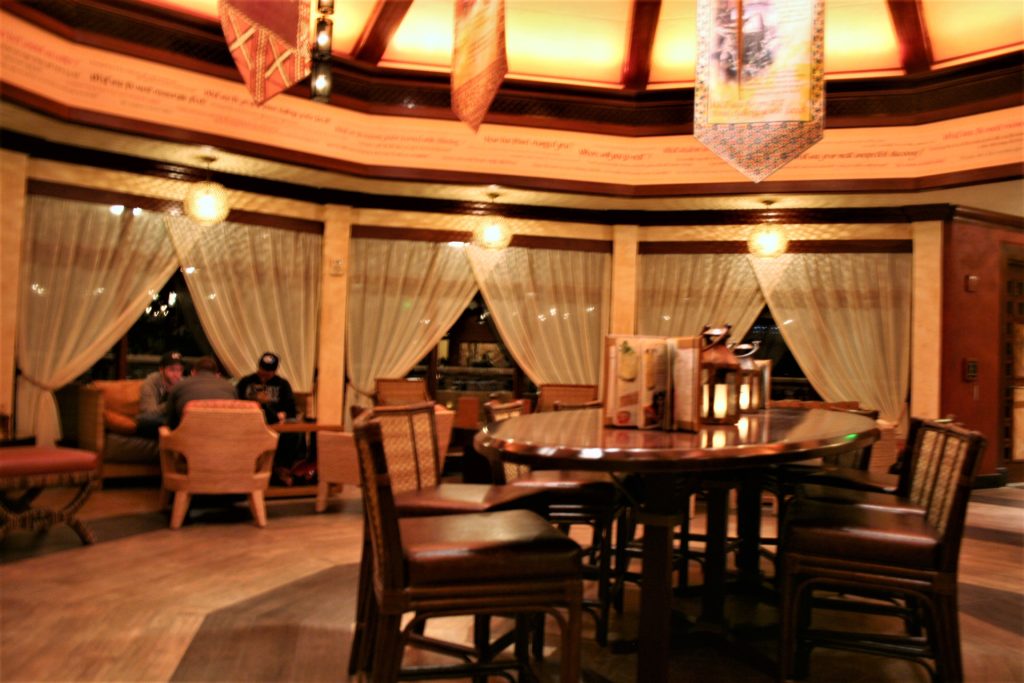 It was freezing cold that evening (almost literally – it was in the 30’s), and we wanted to get inside somewhere so we headed to Tiffins early and decided to go next door to Nomad Lounge to get some drinks.

I apologize that my photos aren’t too great.  The lighting in there was dim and frankly, I was so exhausted and worn out from this trip that I didn’t feel like playing around with my camera settings too much.

I treated myself to a Lamu Libation (Starr African Rum, Cruzan Banana Rum, Guava Purée, with Orange, Lime, and Pineapple Juices topped with Gosling’s 151 Rum).  This was delicious but stronger than I expected!  Really good though. 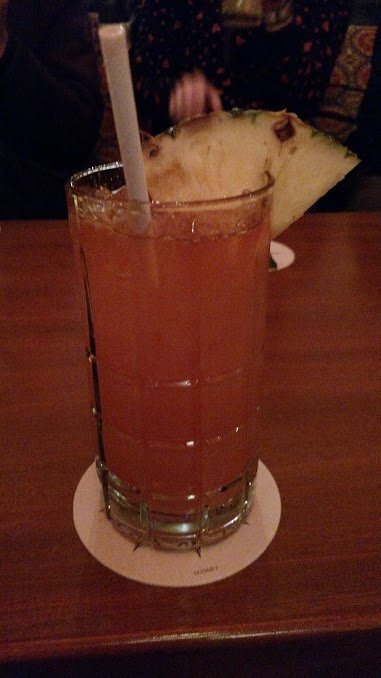 Some of the other drinks we enjoyed included the Night Monkey (Bacardi Gran Reserva Maestro Rum, Guava Purée, Mint, Coffee Simple Syrup, and Lime Juice with a hint of Cilantro).  My friend who had this one said she really enjoyed it, though she couldn’t detect any coffee flavor.  It also has cilantro in it, which you can taste, which can be a polarizing flavor so be aware of that! 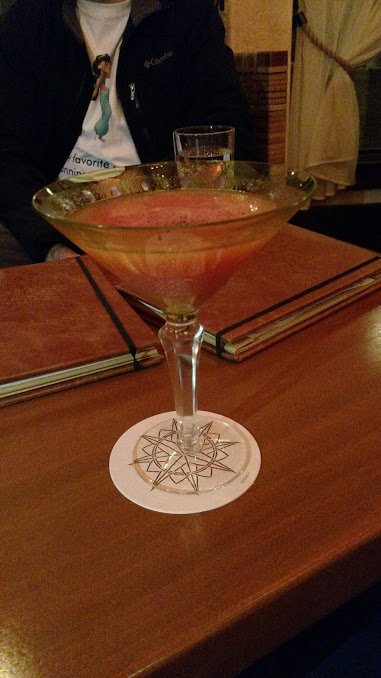 Boto-Rita (Zignum Reposado Mezcal, Combier Grapefruit Liqueur, Guava Purée, and Lime Juice).  I did not get a good picture of this one. 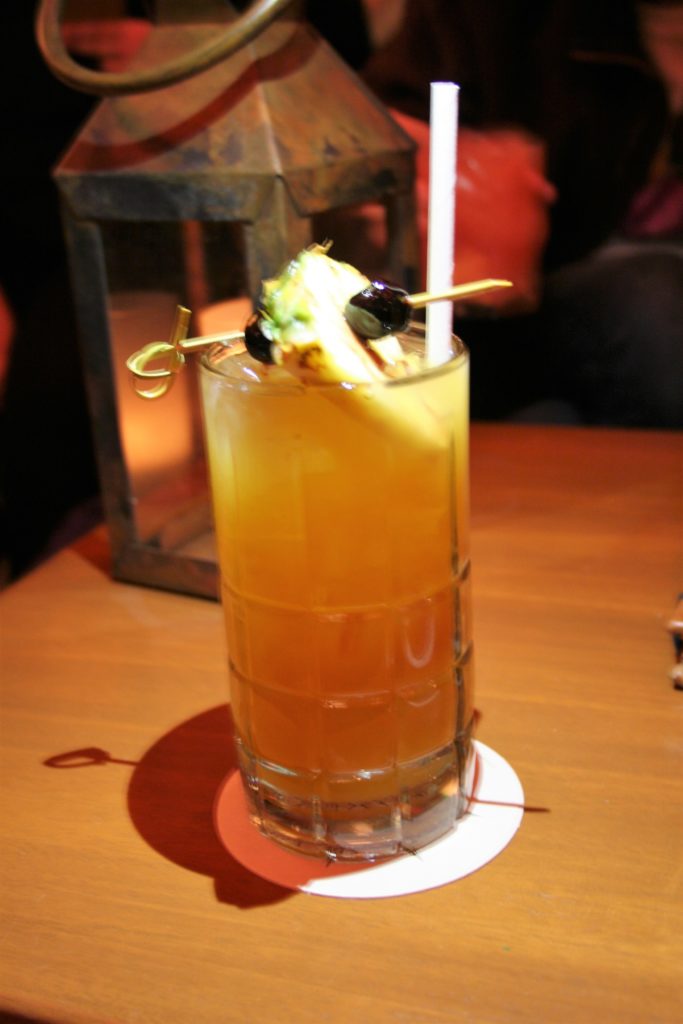 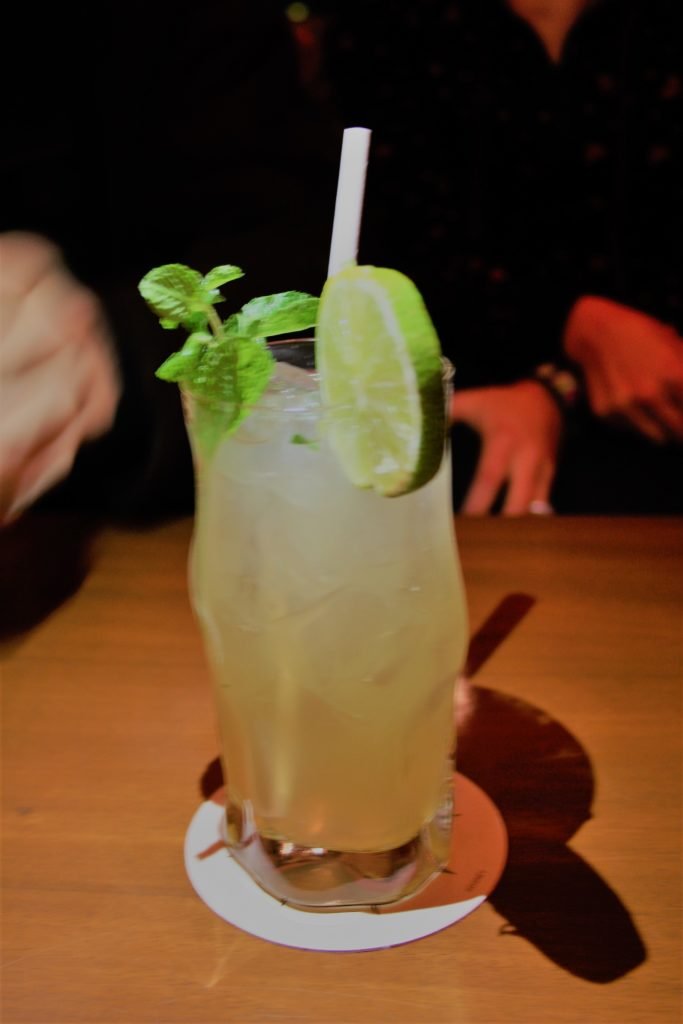 I really loved the vibe in Nomad Lounge, and all of the drinks we had were very tasty.  As an Animal Kingdom lover I can totally see myself coming here just to take a break in the afternoon and enjoying a drink or two.  I plan on it in the future.

After about 20 minutes in Nomad lounge it was time for our dinner reservation!  I definitely wanted to splurge a little bit and so a lot of us did appetizers in addition to entrees (and even dessert!).

For my appetizer I had the Lobster Popcorn Thai Curry Soup (Lime-Basil Emulsion, Popped Sorghum).  I’ll share a photo but it’s really blurry so I’m sorry!  This was delicious though.  I really enjoyed the soup, but I will say it was spicy!  I like spicy but I can’t handle high levels of it.  This was right on the edge of what I can handle, so I could see it being too spicy for others. 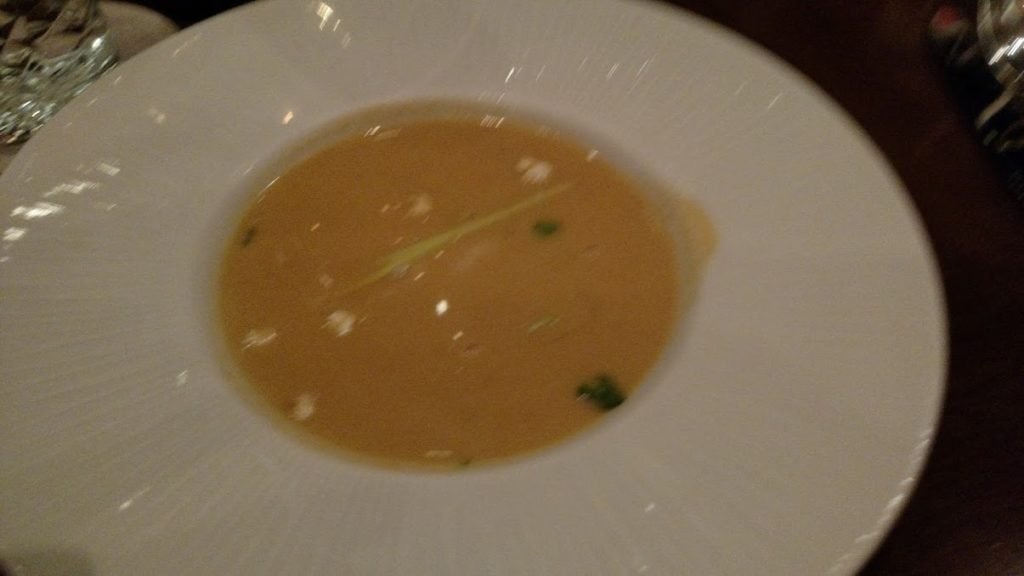 Jason had the Tiffins signature bread service (Pomegranate-Olive Oil, Harissa Yogurt, Black-Eyed Pea Hummus, Zhough Yogurt).  While I personally still prefer Sanaa’s bread service, this was really tasty too.  The pomegranate olive oil in particular was delicious if you like sweet, and different than anything I’ve had.  Jason thought the dips were the star of the meal – it was his favorite part. 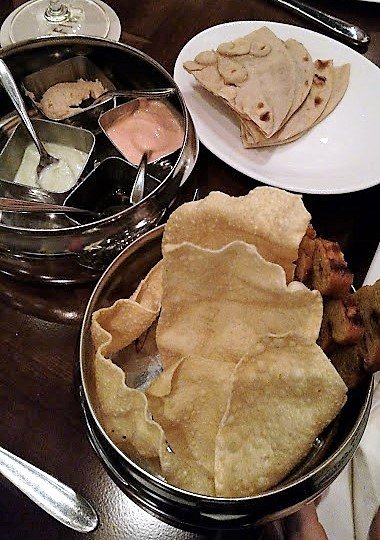 Another appetizer enjoyed at the table was selection of Artisanal cheeses (Cardamom Marcona Almonds, Manjar Blanco, Cape Gooseberry).  I tried a bit of each and thought they were quite tasty.  I liked the harder, orange colored one best (sorry I don’t remember details on what they were!). 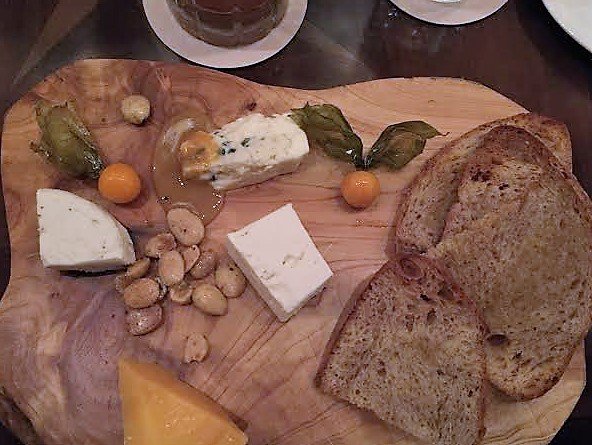 For my entree I had the
(Millet, Market Vegetables, Lime Chutney).  It was a really good curry.  It had only just a hint of spiciness but nice flavor.  I couldn’t eat more than half of it unfortunately!  There were many different kind of veggies in here too. 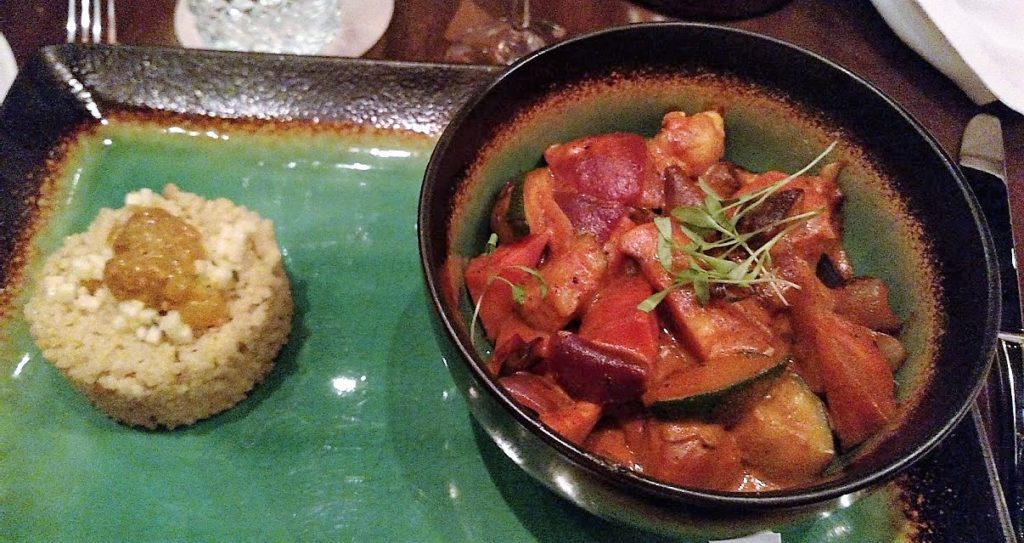 Several members of our party had the pan-seared Duck Breast (Leg Confit, Forest Mushrooms, Parsnip Purée, Truffle Reduction, Huckleberry Compote).  It got good reviews all around.  One said if you like duck she definitely recommends it.  Another who tried a bite and doesn’t normally like duck would also recommend it, so there you go! 😉  If you haven’t had duck before, just be aware that it tends to be pretty fatty and this is no exception. 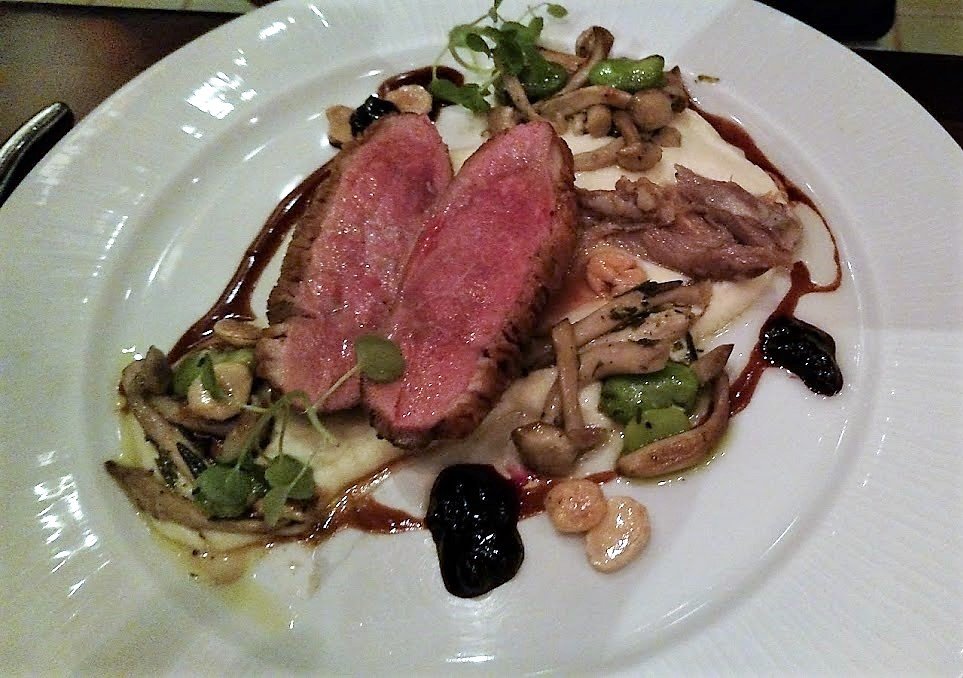 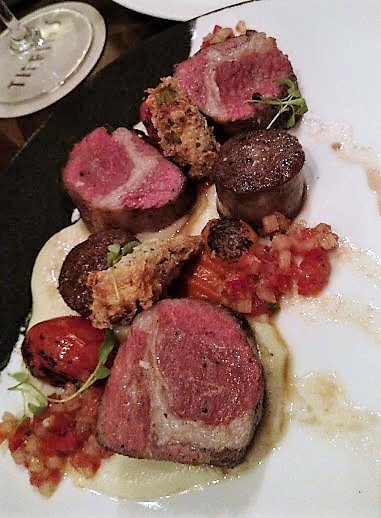 He said it was very good and what he would expect from a signature dish.  The other friend who ordered it had never had lamb before and really enjoyed it.  She was glad she ordered it!

We also had a friend who ordered off the kids menu because she was a little pickier, and Tiffins had no problem with that.  She had the pasta and was able to order 2 of them (served together) to basically make an adult sized portion, so that worked out well.

And a couple of us were even down for dessert!  Although I was so full I had run a marathon, so I definitely felt like I needed some dessert to celebrate.

Jason and I shared the South American chocolate ganache (Caramelized Banana, Cocoa Nib Tuile).  Not surprisingly, this is very chocolatey, which I love.  The other flavors (bananas and pomegranate sauce) went well with it and I ate more than half of it despite being full.  It’s pretty small but also quite rich, so that works. 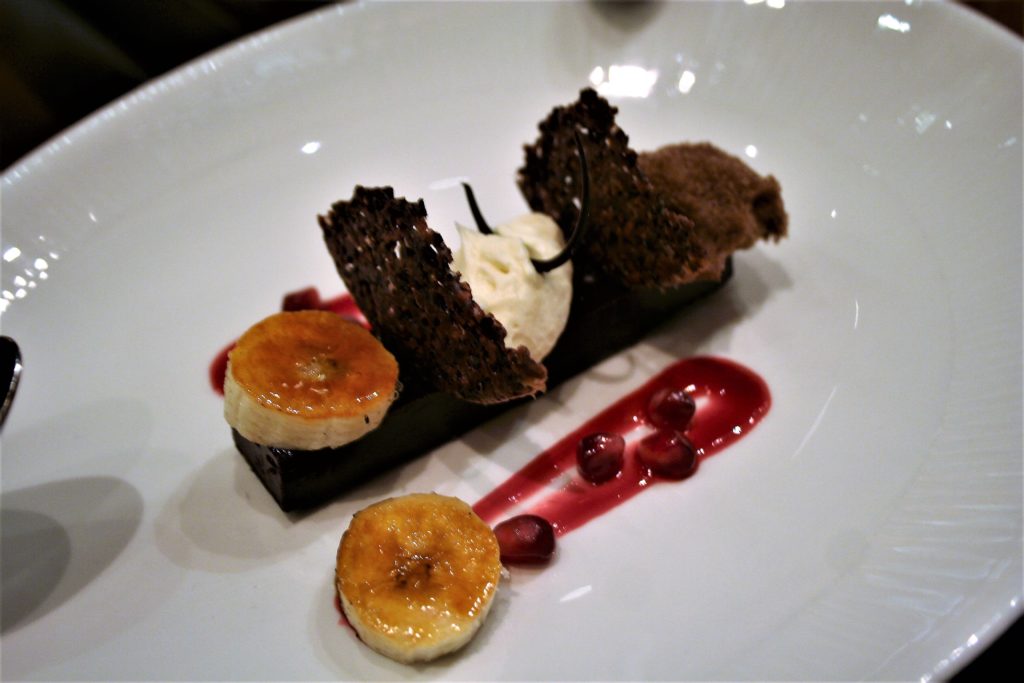 Also at the table was the Calamansi Mousse (Mango Lava, Swiss Meringue).  It looked gorgeous and tasted good too. 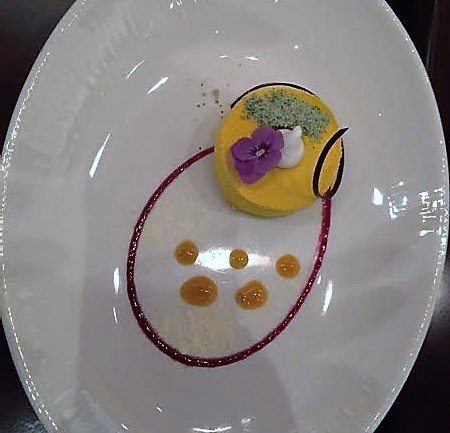 Finally, a sorbet tasting was shared.  They listed a ton of flavors available, all of which sounded interesting.  Things like passion fruit, lime, guava, etc. 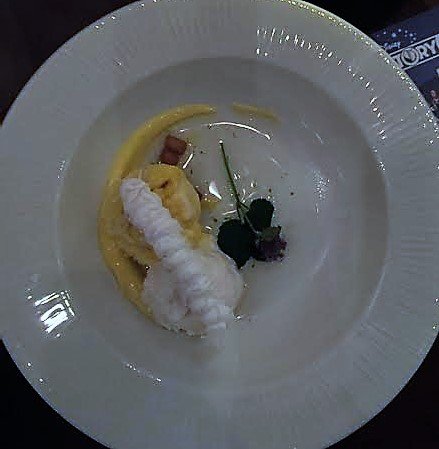 All in all I really enjoyed Tiffins, but I feel like I wasn’t able to enjoy it to the best of my ability.  I had run 26 miles that morning, just gotten over the worst panic attacks I’d ever had, and (though I didn’t know it at the time) I was coming down with a flu-like virus.  Despite all that Tiffins still left a good impression on me.  I’m already planning to go back in September so we can try it again when I’m hopefully 100% healthy!

Do you enjoy trying adventurous foods?  What at Tiffins sounds best to you?