You are here: Home / Disney Cruise Line / Tiana’s Place on the Disney Wonder 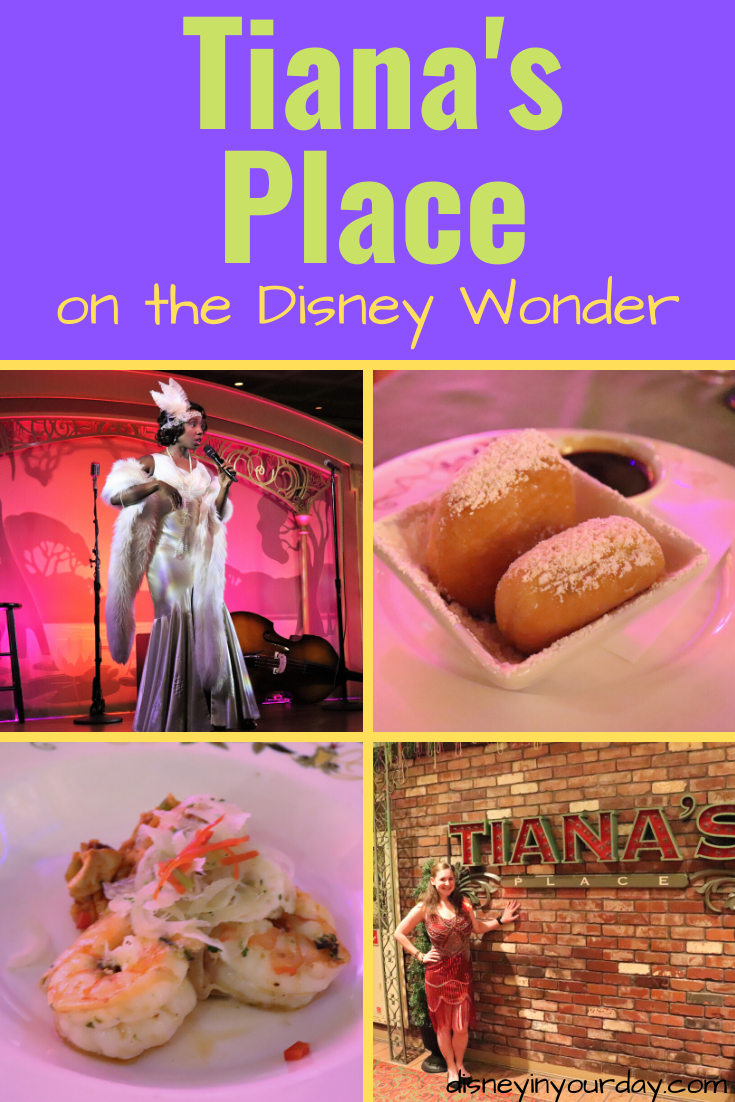 It’s hard to pick a favorite Disney movie, because there are just so many good choices. I usually go with Beauty and the Beast, since it’s been a favorite since I was a kid. However, I will admit that Princess and the Frog is strongly vying for that top spot, and there are many days where I would probably pick it as my favorite. So I was pretty excited to hear that the Disney Wonder cruise ship would have a restaurant called Tiana’s Place, themed after Princess and the Frog!

It makes a lot of sense, since Tiana’s goal in life is to open up her own restaurant. Plus, since it takes place in New Orleans that means delicious food and swingin’ jazz music! 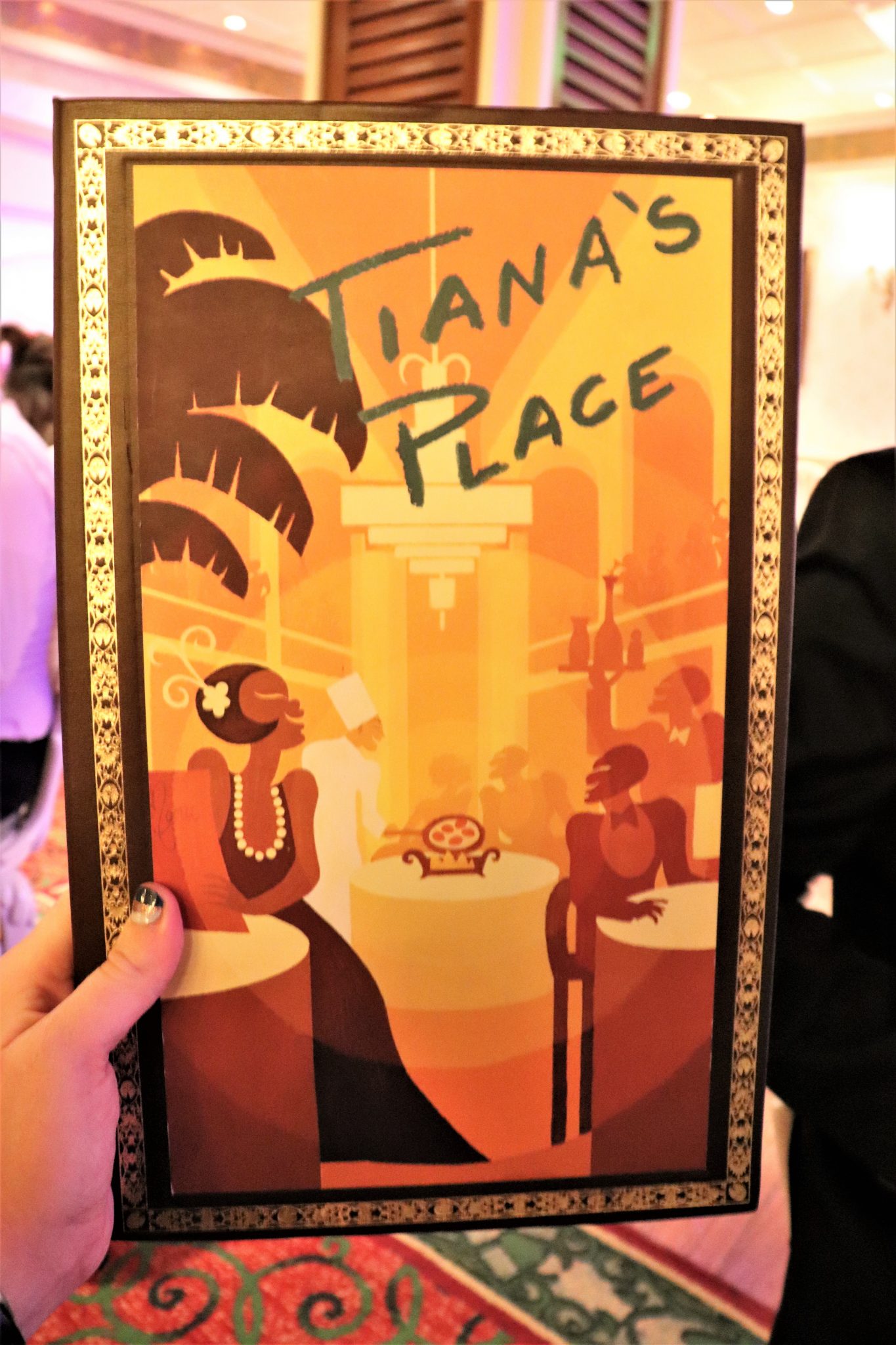 We ate here twice – once for the Mardi Gras menu (which is the one you’ll get on most sailings) and then again for the Princess menu (which is just for longer cruises and also happened to be our formal night).

It is such a cool place. You enter to an area with a brick wall, scroll work, and mardi gras beads. The back wall of the restaurant is also brick and has some photos and artwork inspired by Princess and the Frog and New Orleans. 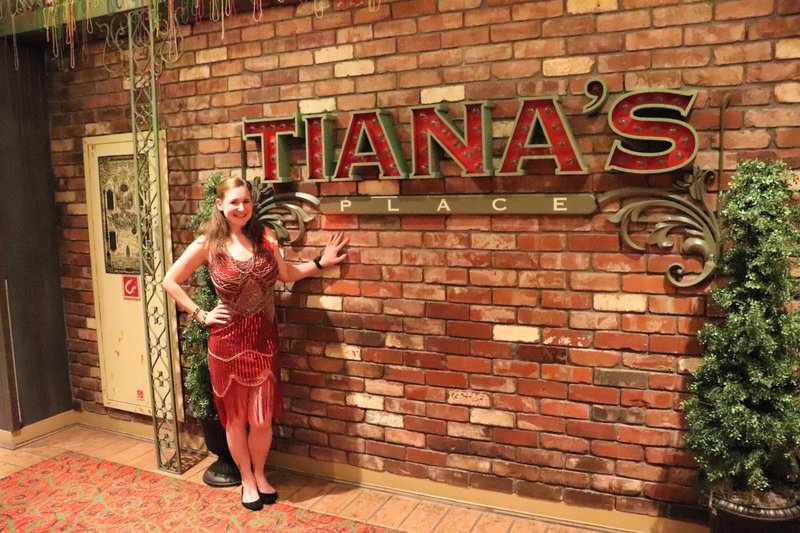 There are some beautiful light fixtures in the center of the room and the decor has the same sort of vibe as Port Orleans Riverside (which obviously makes a lot of sense). And at the front of the room was a stage for the entertainment! We were lucky to be seated right in front of the stage.

Because the entertainment at Tiana’s Place was definitely a highlight of the whole trip. The “Crawfish Crooners” performed throughout the night, singing classic jazz songs and jazzy versions of Disney favorites. The Mardi Gras party also had a parade and they invited people up to dance, which was a total blast. The musicians were extremely talented and I could have hung out listening to them for quite a while. 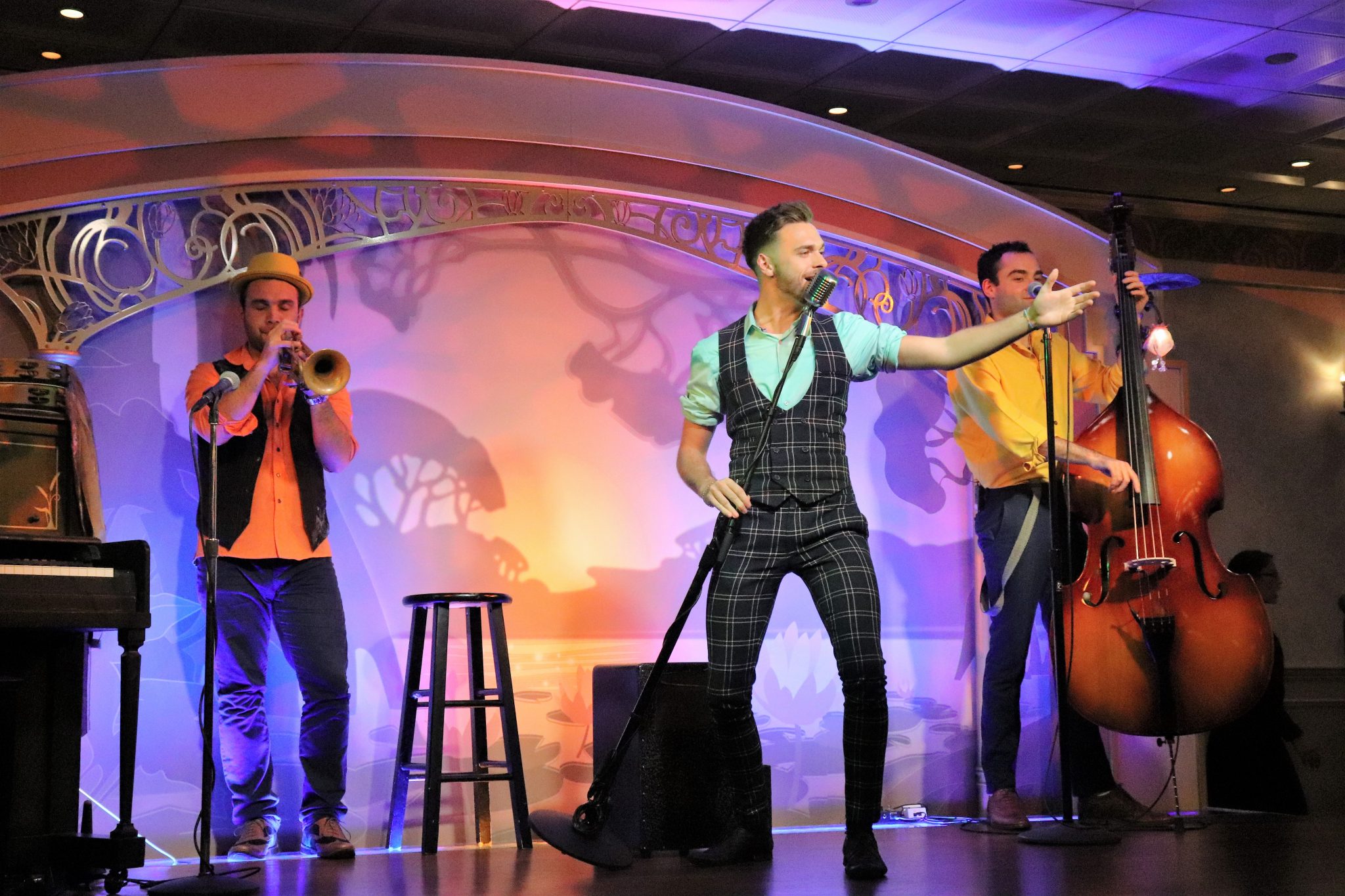 And Miss Tiana herself was in attendance! She looked the part perfectly and had a gorgeous dress. She spoke occasionally throughout the night to get people excited, danced with children, and stopped for some photos. 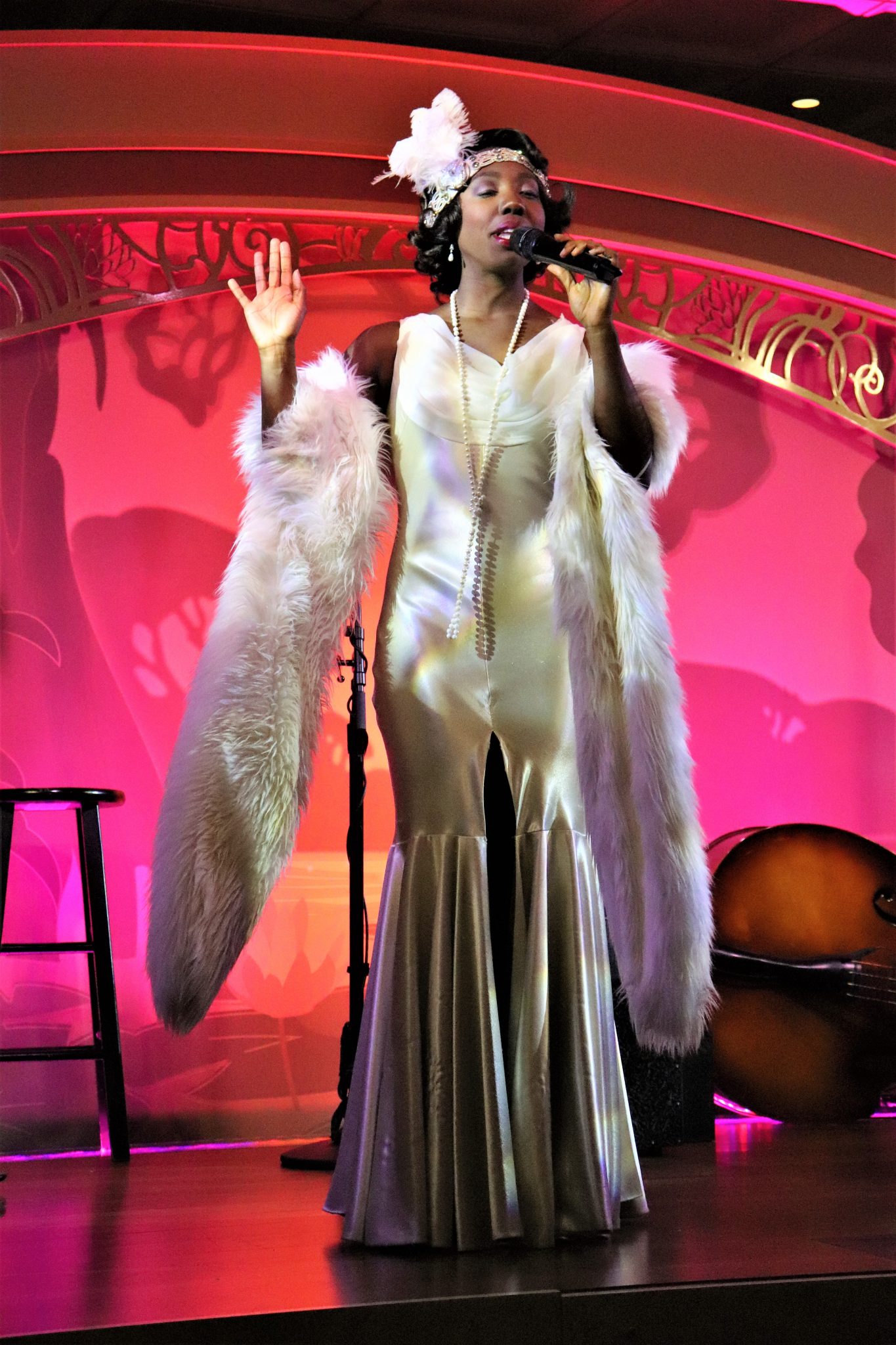 I will mention that I’ve seen in some other reviews Louis the alligator was also a character at the meals, but he was not present either of the times we visited.

Most of the restaurants on a Disney Cruise have 2-3 signature drinks available that are unique to that location, and then the full drink menu is also available. We tried 2 of the three drinks available special at Tiana’s Place.

The first was the Bayou Moon (Bayou Spiced rum, Ruby Port, VeeV Acai, fresh lemon juice, and fresh blackberries). This was definitely my favorite, as it was sweet but not overly so, and it has one of my absolute favorite things ever – blackberries. I think I had 3-4 of these over the two nights. I know this because you also got a Mardi Gras bracelet when you ordered it so I have quite a collection now! 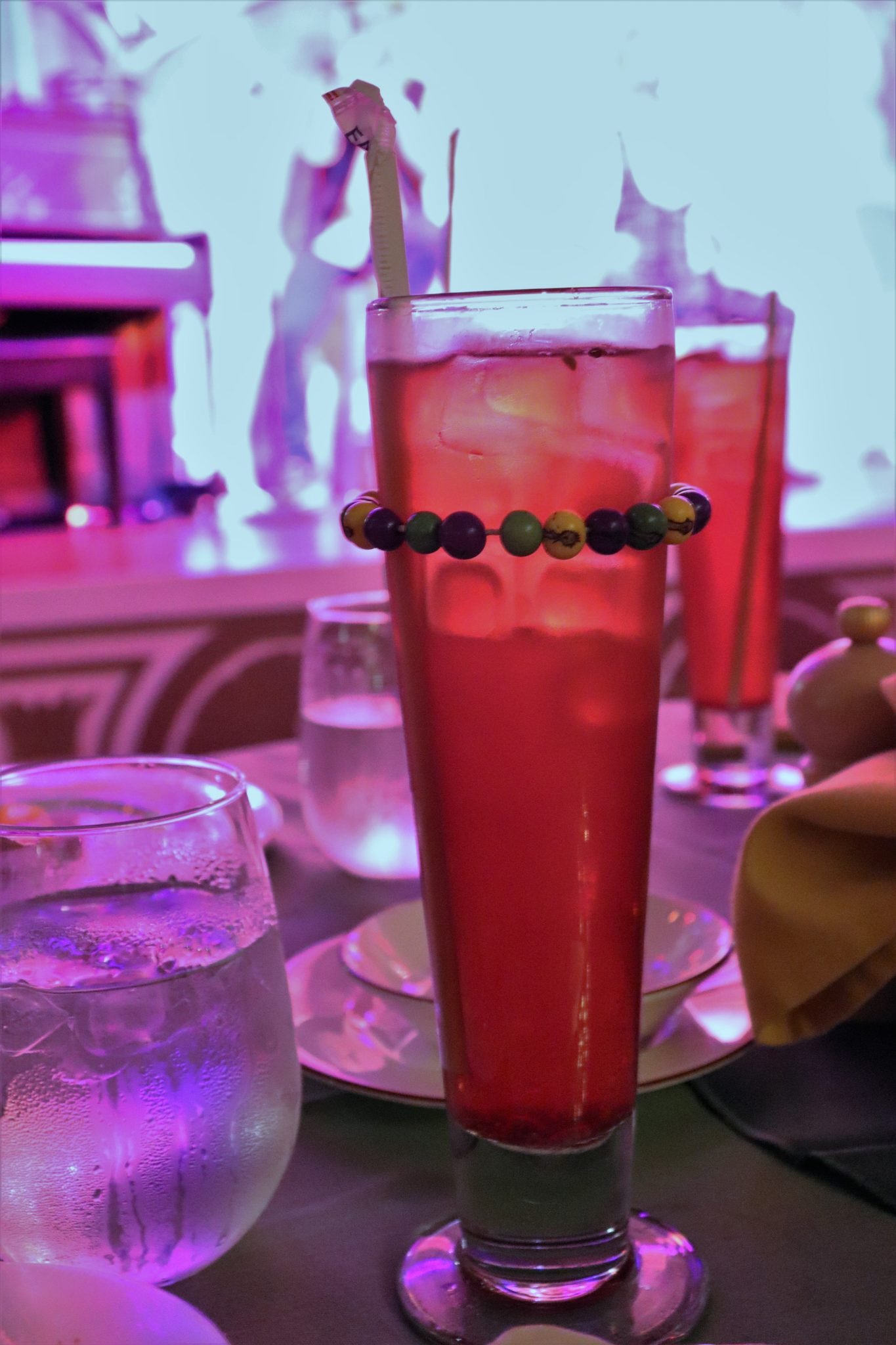 The non-alcoholic specialty drink came with a light up Ray the lightning bug – I thought it was so cool that I asked my server if I could get one. He brought one with my Bayou Moon! (And surprisingly didn’t even charge extra for it).

The other specialty drink was the Mardi Gras (Powerade Grape, Mello Yello, and Bayou Rum). Jason got this and I think he liked it well enough. I don’t like grape flavored things much at all so I stayed away from that one. 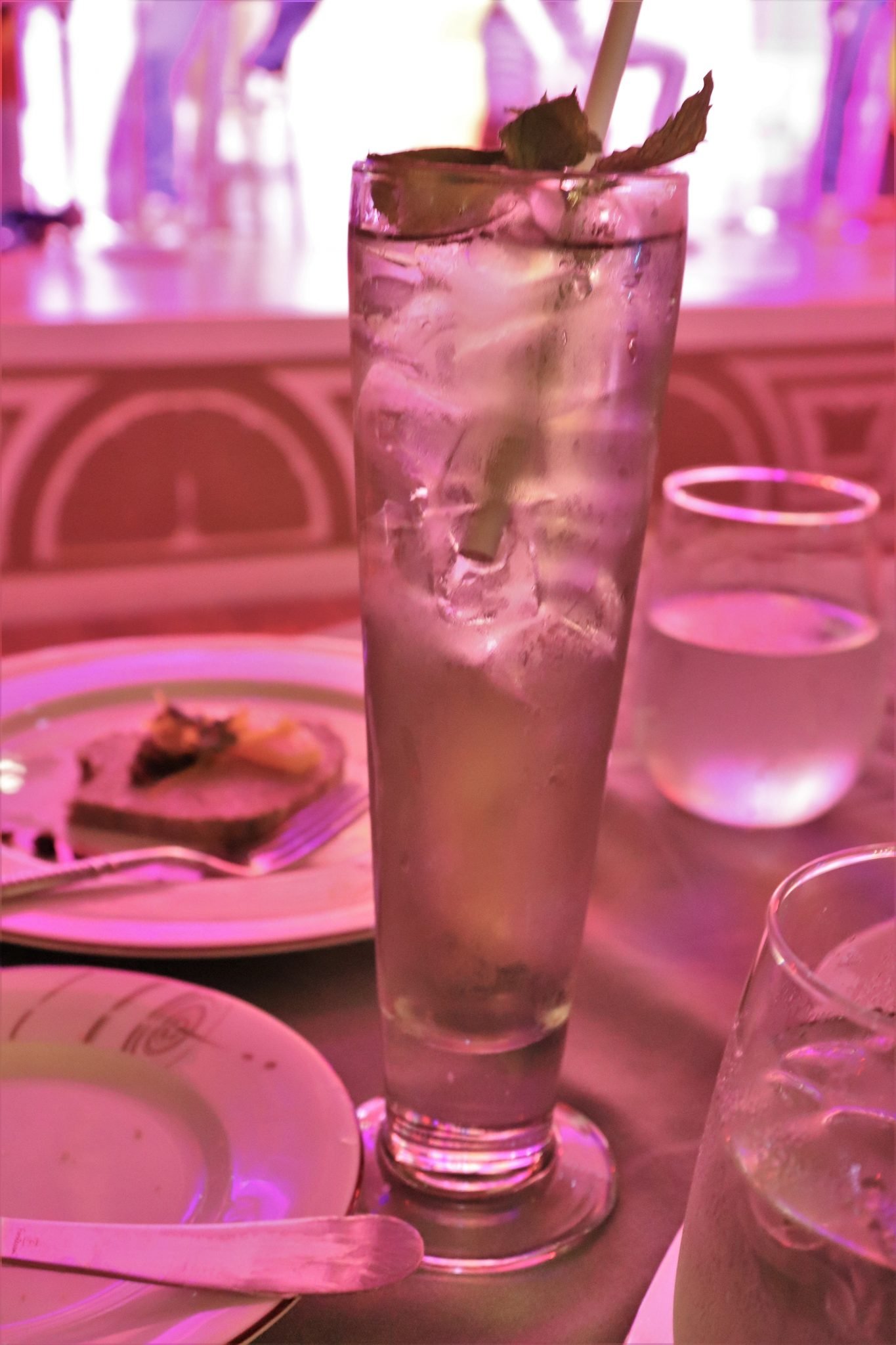 Before we get into all of the food photos I want to apologize because some of the quality of these photos is not the best. I’m really pretty decent at food photography, but the lighting in here was really funky – and with all the fun and entertainment going on, I didn’t want to spend a ton of time fiddling with my camera settings and miss out on the Mardi Gras party and parade!

For my appetizer at Tiana’s Place I had the Boudin Sausage Fritters (minced Pork and Boudin Sausage, Breaded and Fried, served with a Bourbon Aioli). I really enjoyed these. There was a good thick breading and the flavor was nice. 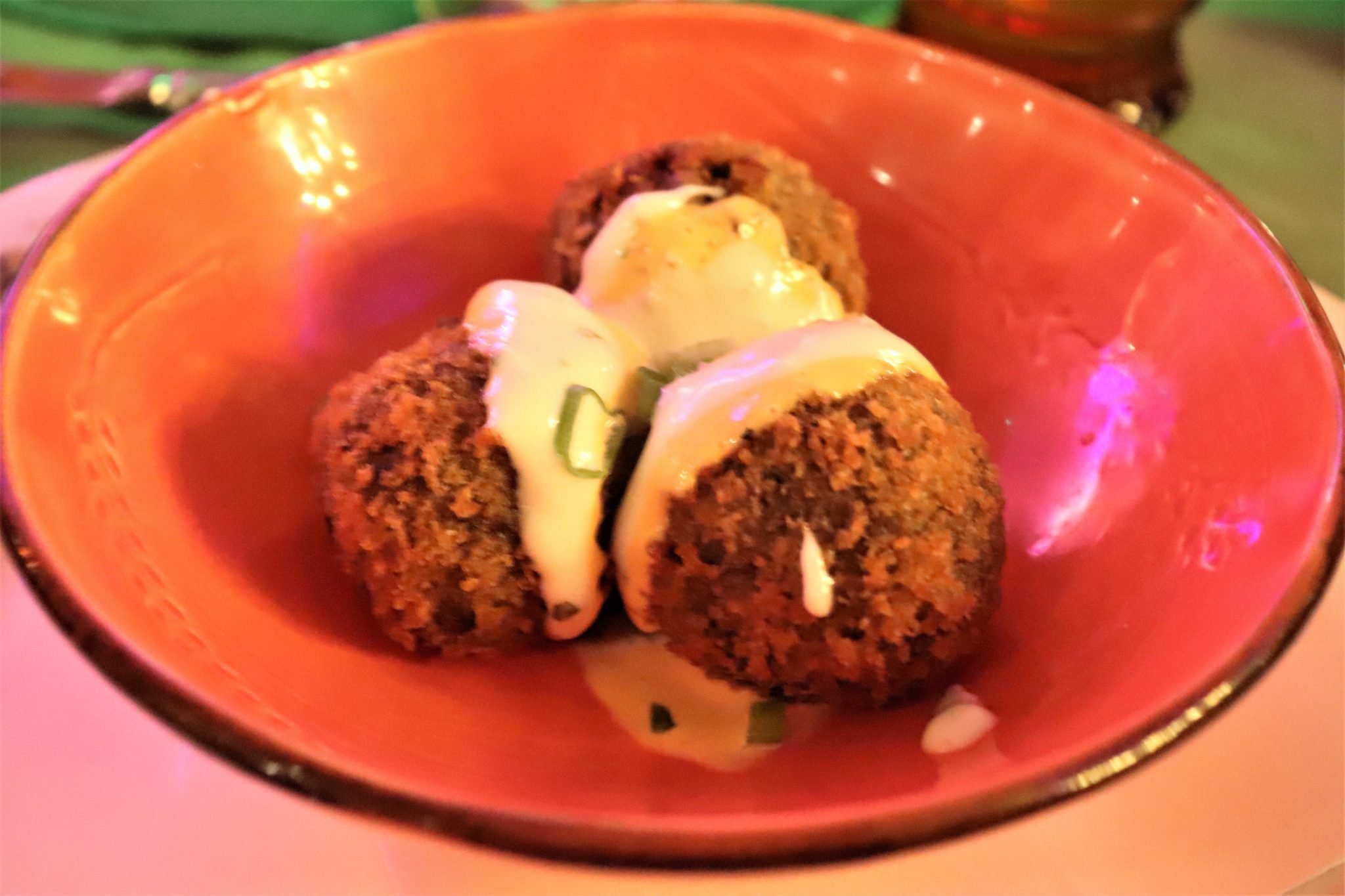 Jason’s first appetizer (he often got 2 appetizers and/or 2 entrees at every meal) was Prince Naveen’s Cajun Charcuterie Board (cured Pork Shoulder, Duck Rillette, Duck Pastrami, Saucisson, Cajun Egg, Spiced Mustard and Pickles). This was good, a decent charcuterie but nothing really outstanding and not really much of a cajun flavor. 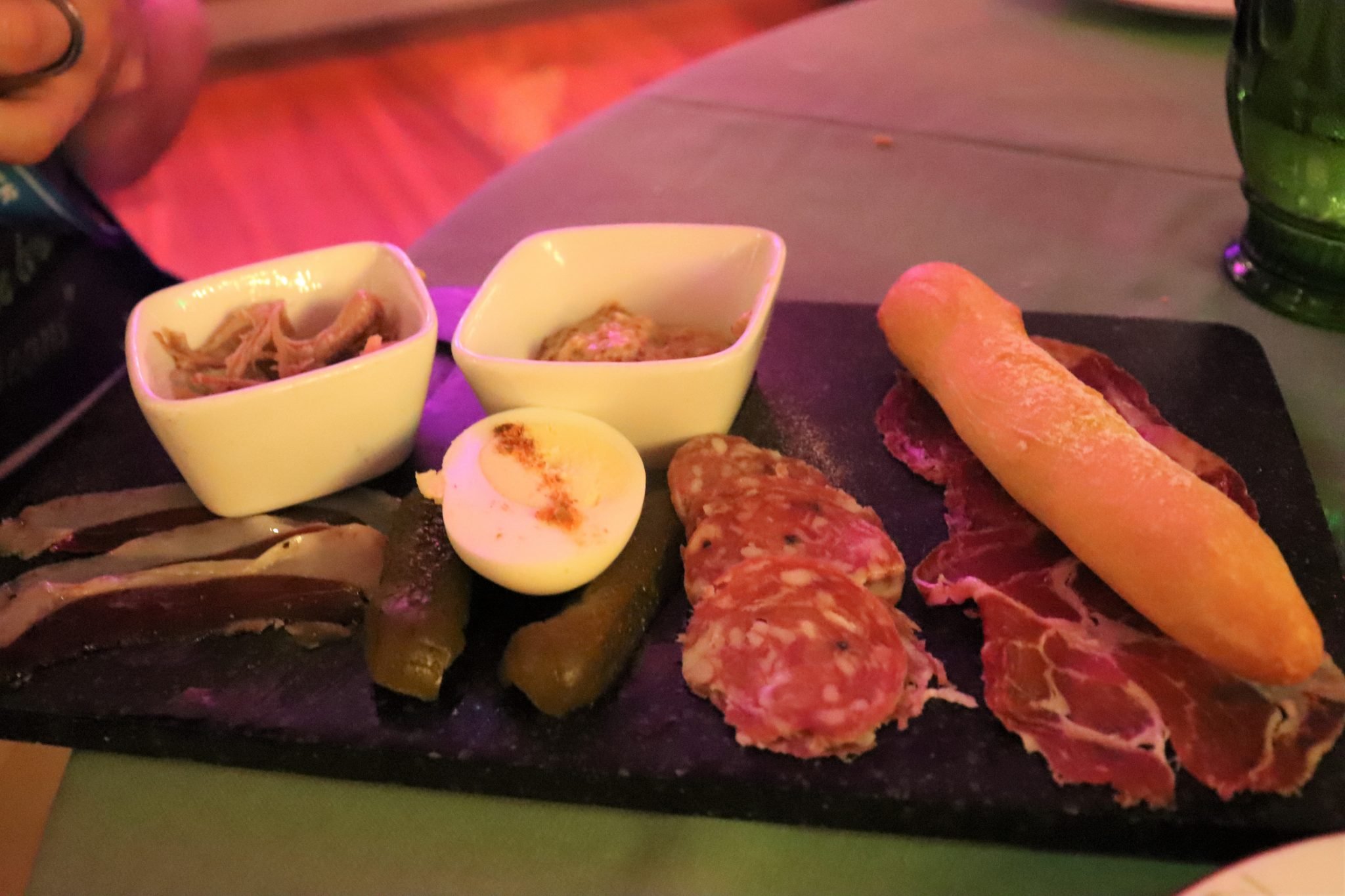 His other appetizer was the Ahi Tuna Tartare (with Mango, Pine Nuts, Radish and Wasabi). The addition of mango to this made it a really interesting profile of flavors and a good balance with the wasabi. 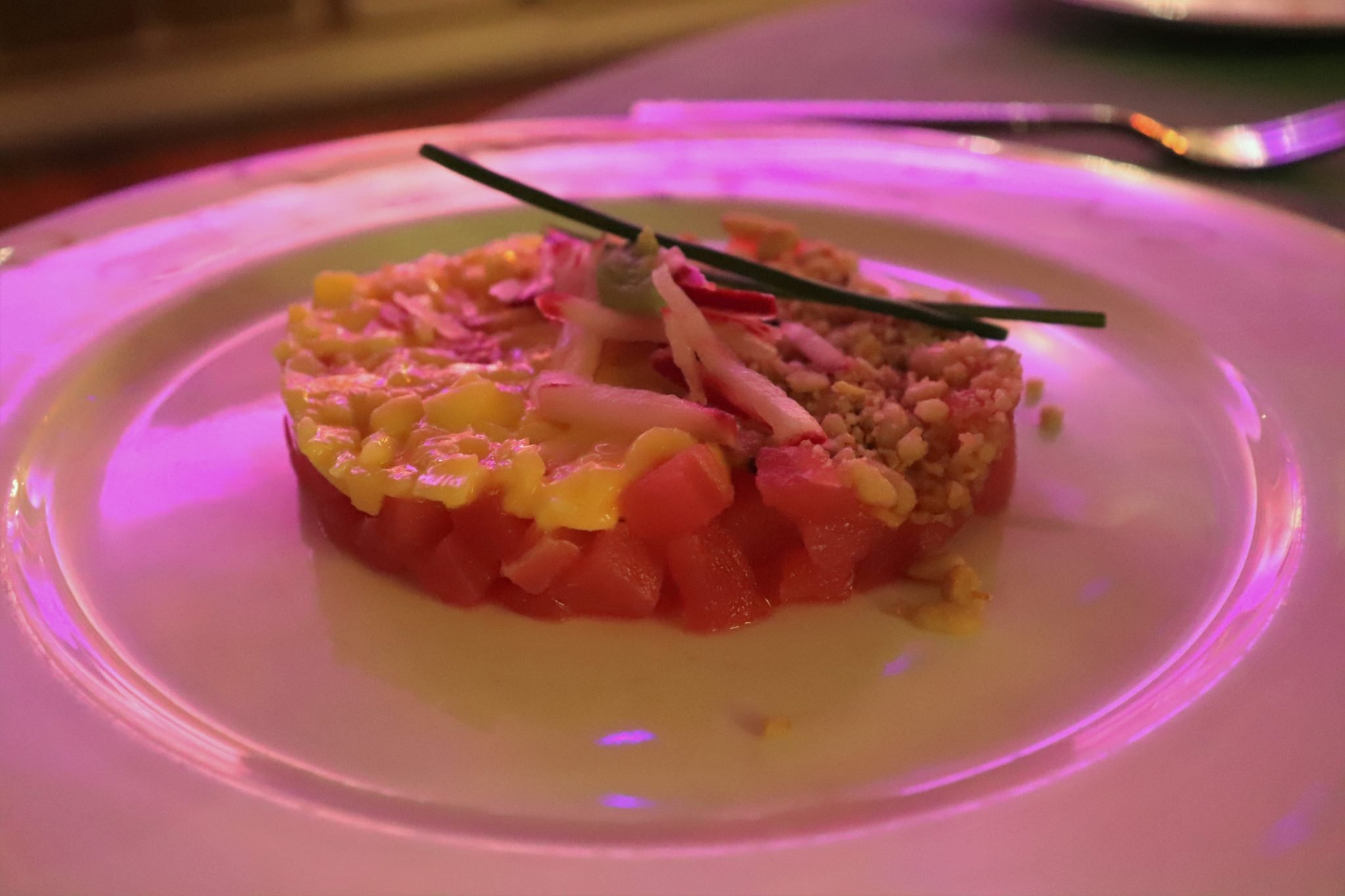 One of our table mates got the Sautéed Gulf Shrimp and Grits (with Andouille Sausage, Grilled Green Onions and a Smoked Barbecue Sauce). This looked pretty good and the addition of barbecue sauce made it a more interesting appetizer. 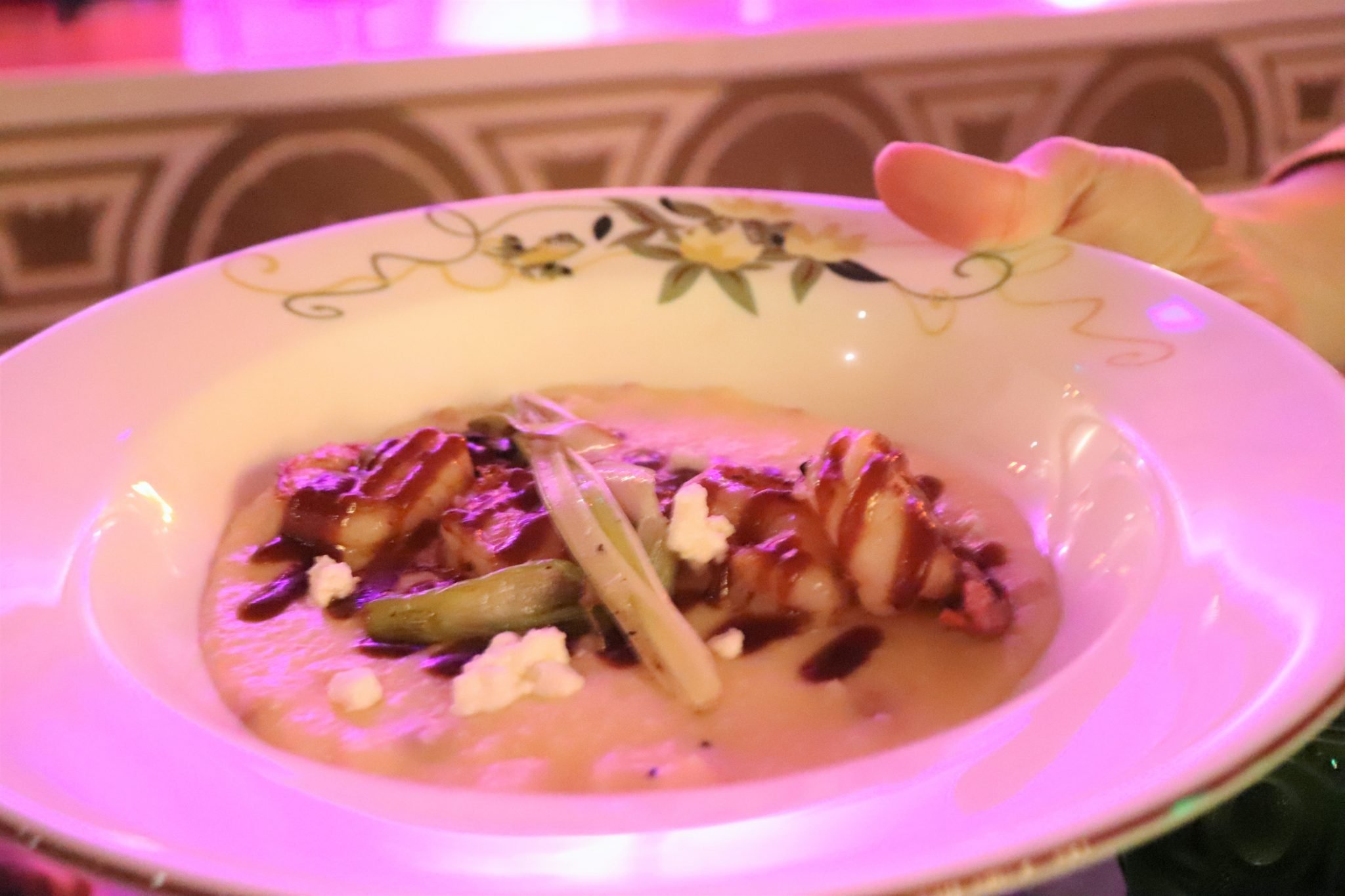 For a soup/salad I got Mama Odie’s Creamy Tomato Soup. This was fine but it wasn’t anything special. I’ve recently started to really enjoy a tomato soup but they have to have something to elevate above just your typical soup and this didn’t do any of that. 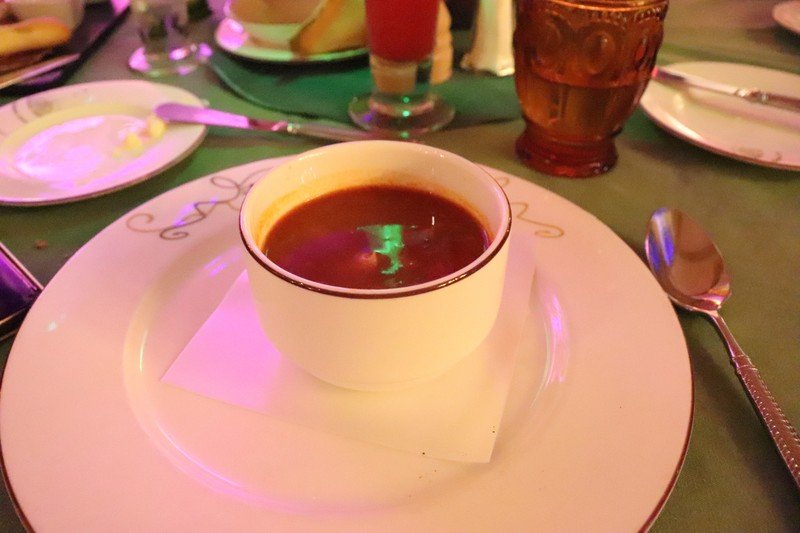 Since I wasn’t feeling great for my entree I went with one of the “Lighter options” on the menu: Warm Water Lobster Salad (with Avocado, Butternut Squash, Fennel, Endive, Grapefruit, Jicama, Hazelnuts and a Citrus Dressing). This was actually fantastic. It had a bunch of different things I like – lobster, avocado, grapefruit – and the flavors went really well together despite being a combination I’d never seen before. I’m grateful I ordered this! 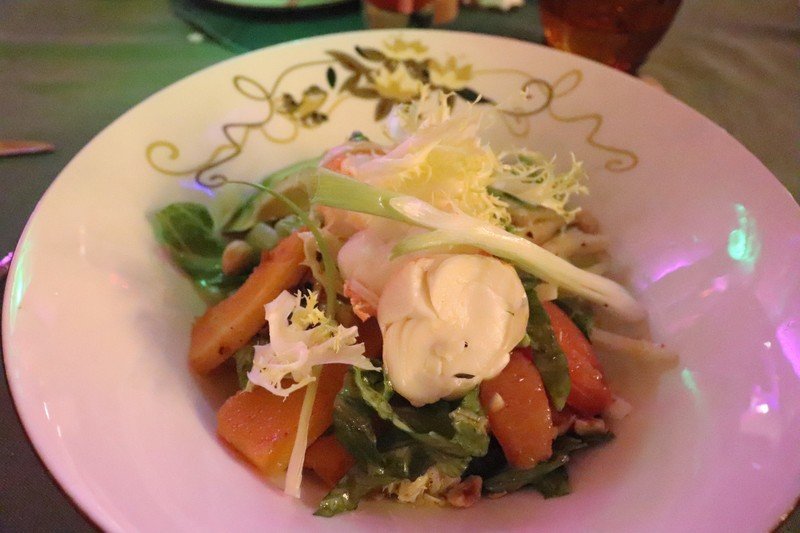 Jason had the Big Daddy’s Roasted Prime-Rib of Beef (with a double Baked Potato, Broccolini, sweet Roasted Carrots and a Red Wine Veal Sauce). This was huge. It was a decent prime rib (some fatty parts but that’s to be expected) and the potato it came with was very good. 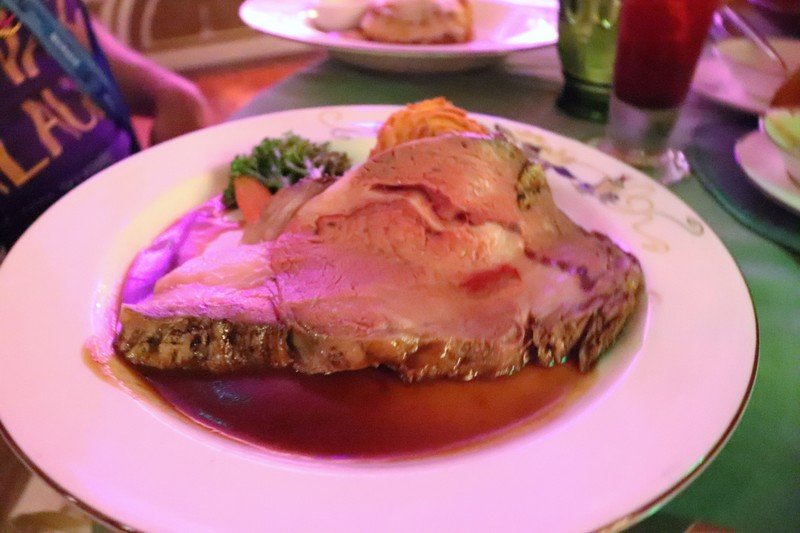 Even with an entree that large Jason still had a second entree coming… the Cajun Spiced Sea Bass
(on Shrimp Jambalaya with crisp Fennel Salad and Rémoulade). I don’t think he ate as much of this as expected since there was so much food. It was decent but the jambalaya could have had some more flavor and spice to it. 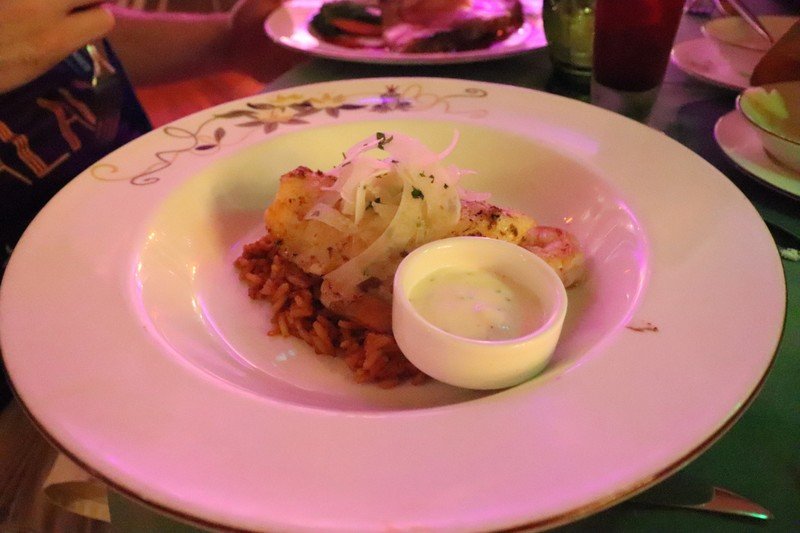 For dessert Jason had Tiana’s Buttermilk Beignets (dusted with Powdered Sugar and served with Chocolate Espresso Dipping Sauce). They were, of course, delicious! But it’s hard to go wrong with warm beignets covered in sugar. 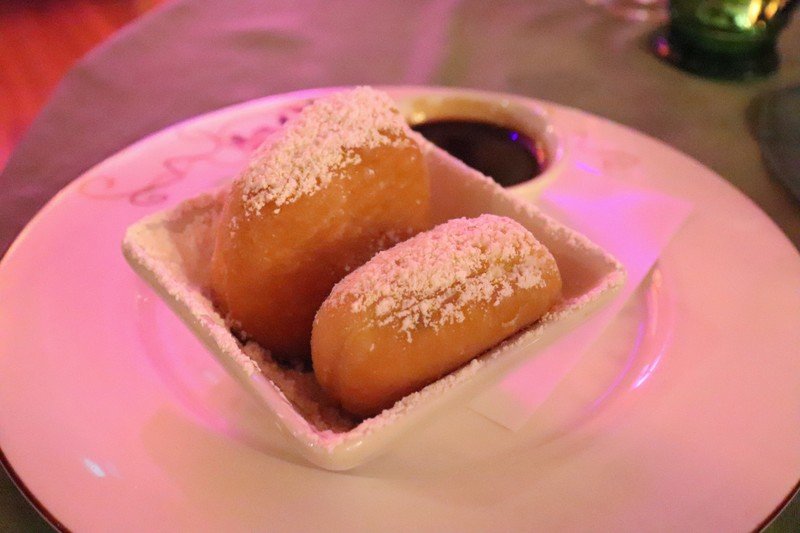 I had the New Orleans Bananas Foster Sundae (French Vanilla Ice Cream with Rum-flavored Caramelized Bananas and Whipped Cream). I only had a few bites but it was good. I could have used more of the rum-flavored caramelized bananas though! 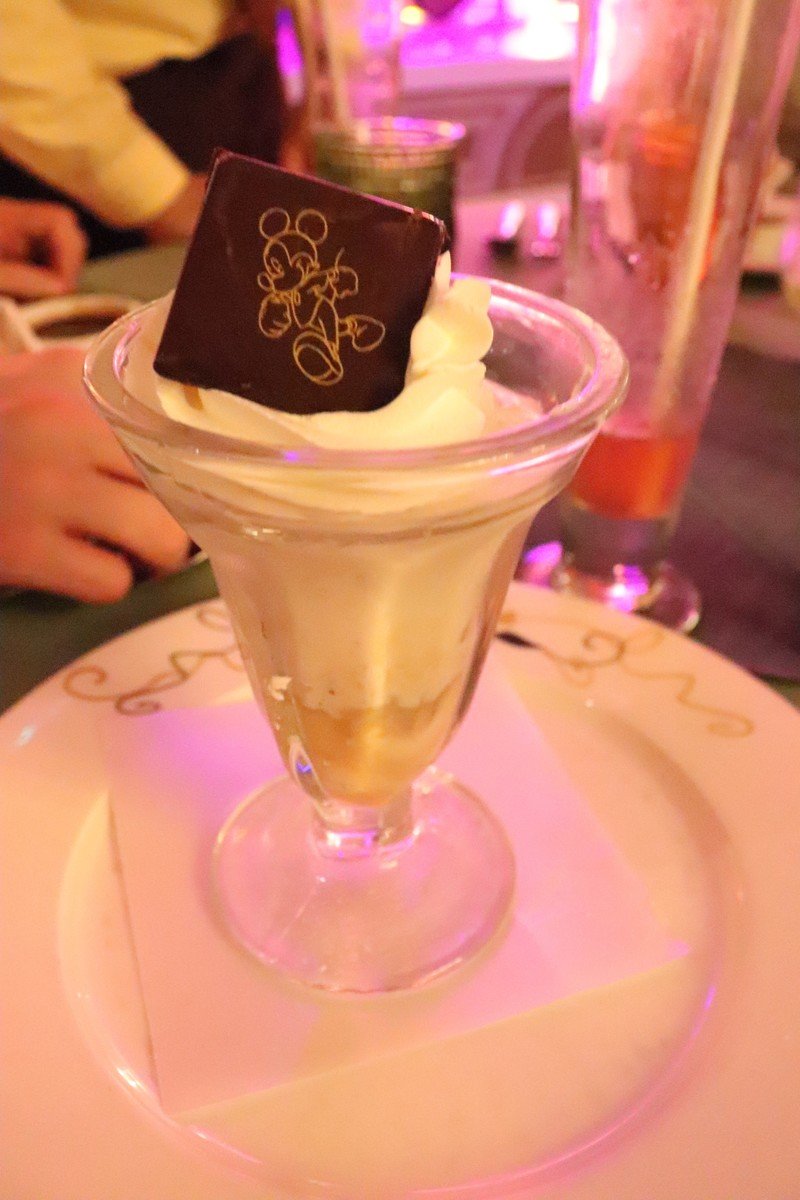 For my appetizer I got the Louisiana Hot Crab Dip (with Toasted Croutons). This was probably the highlight of this menu. It was a really tasty dip and a pretty large serving for a cruise ship appetizer. 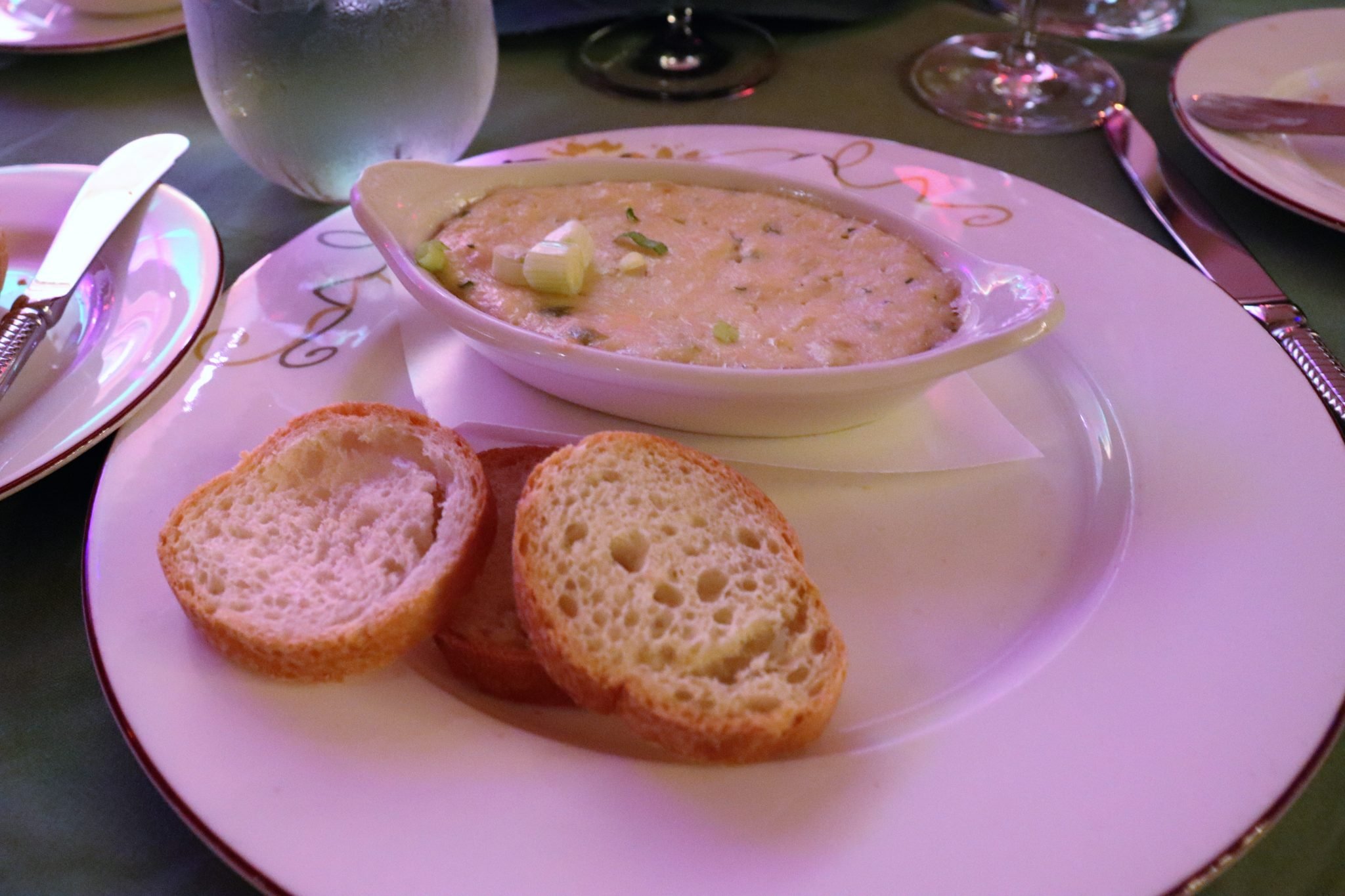 Jason’s appetizer was the Duck and Pistachio Terrine (with caramelized orange peel and cilantro). He got it because he wanted to try new things on the cruise and in general he likes duck. This was pretty similar to a pate but in general it just was not his favorite. The texture of these sorts of dishes takes a little getting used to. 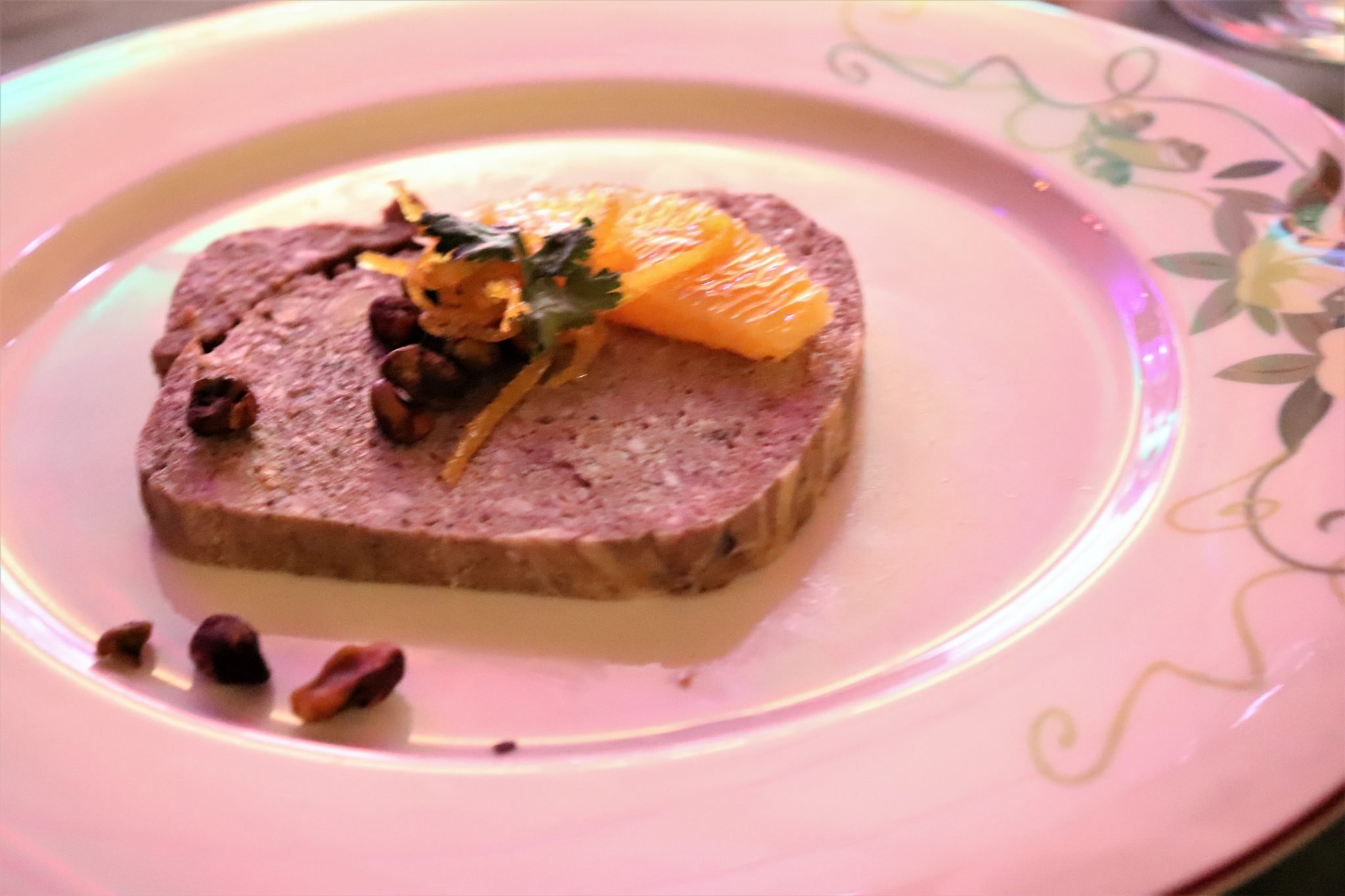 For the salad course this night I had the Coronation of Mixed Leaves (Vine tomatoes, blue cheese, apples, candied walnuts, and aged red wine vinegar). I enjoy the combo of blue cheese with more sweet things and candied walnuts so this was nice. 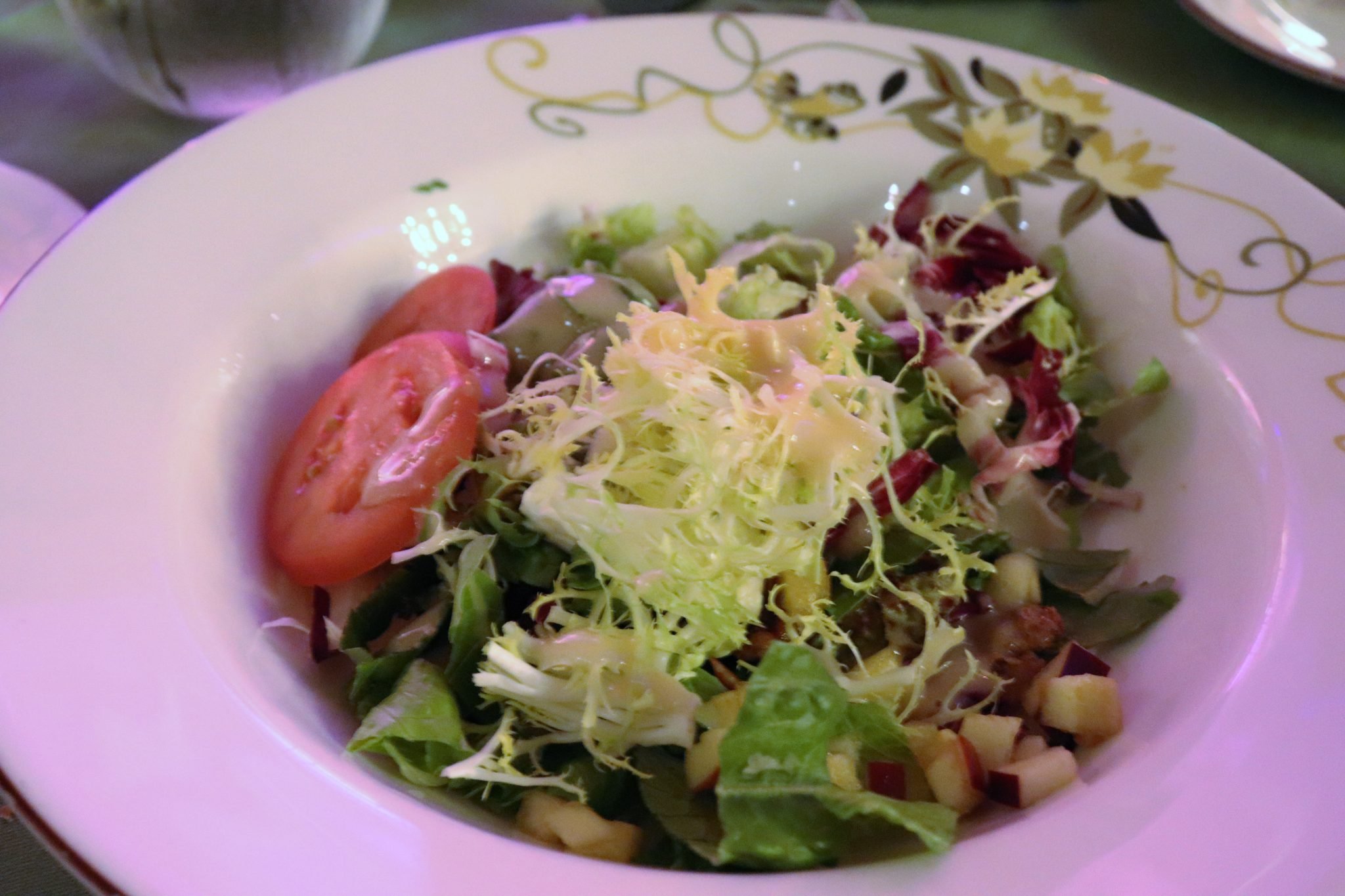 Jason went with the West Coast lobster salad (with iceberg, cucumber, and a lemon-horseradish dressing – Alaska only). He loves lobster and cucumber so this was a good way to combine them both! 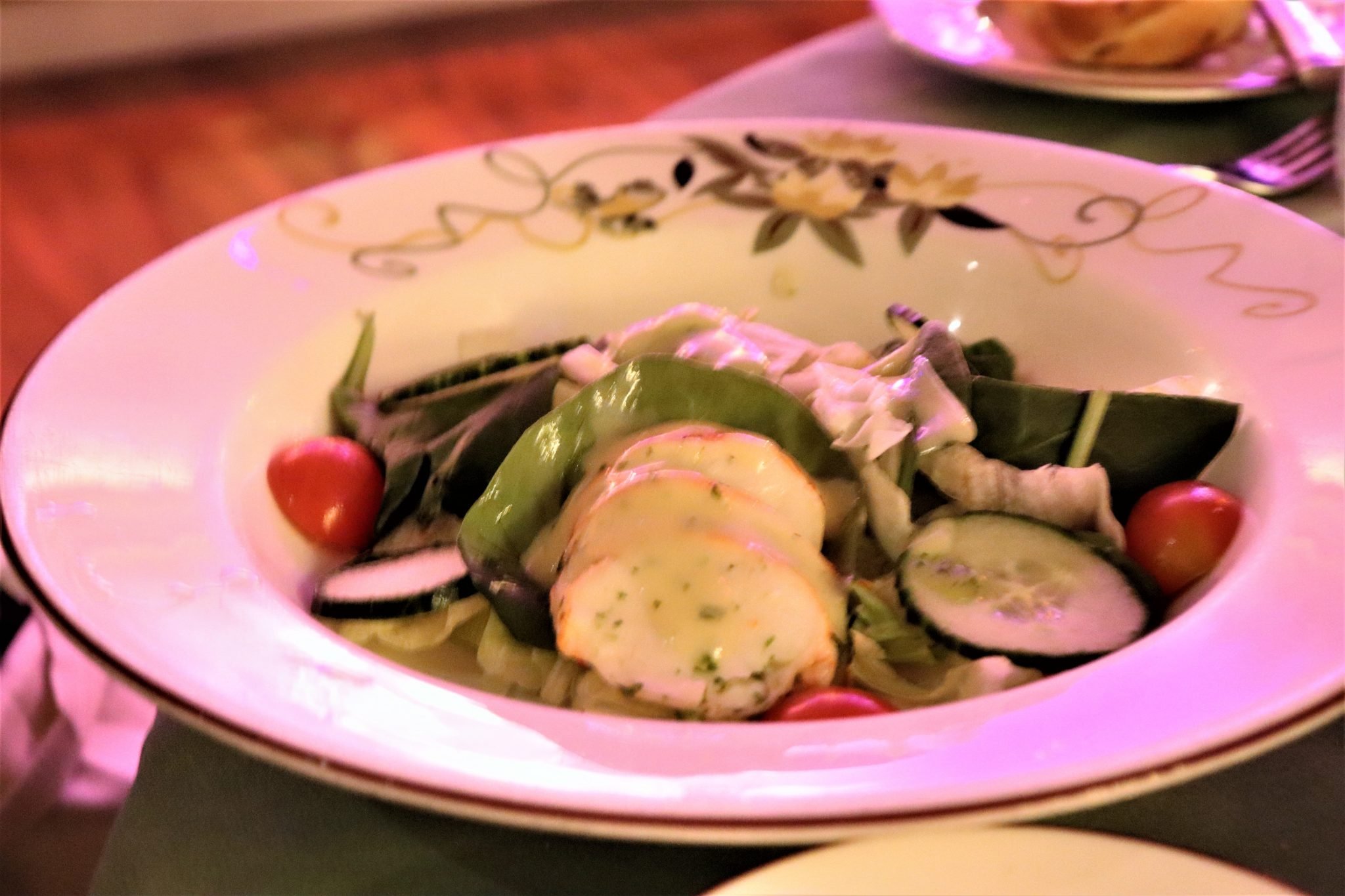 As an entree I got the Lime Marinated Jumbo Shrimp (with jambalaya rice, chicken, andouille sausage, celery, and cajun spices). There wasn’t a ton of jambalaya and like with the above menu it wasn’t super flavorful. The shrimp was great though – big and juicy and light enough to be filling without stuffing you. 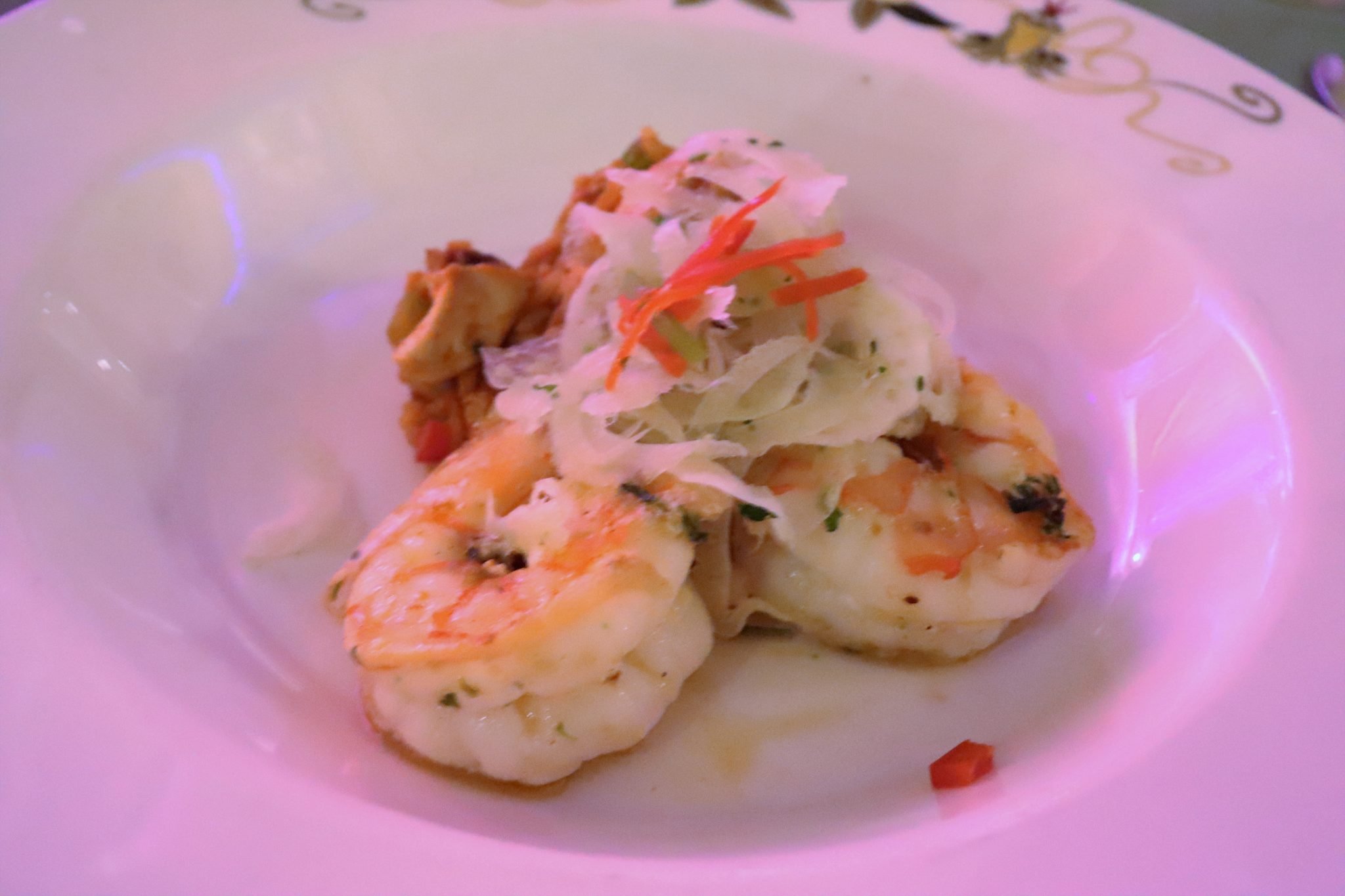 Jason chose the Baked Filet of Bering Sea Halibut (served with creamed potatoes, sauteed fennel, and a light Dill cream sauce – Alaska only). This was a nice piece of fish but didn’t do anything to really stand out. 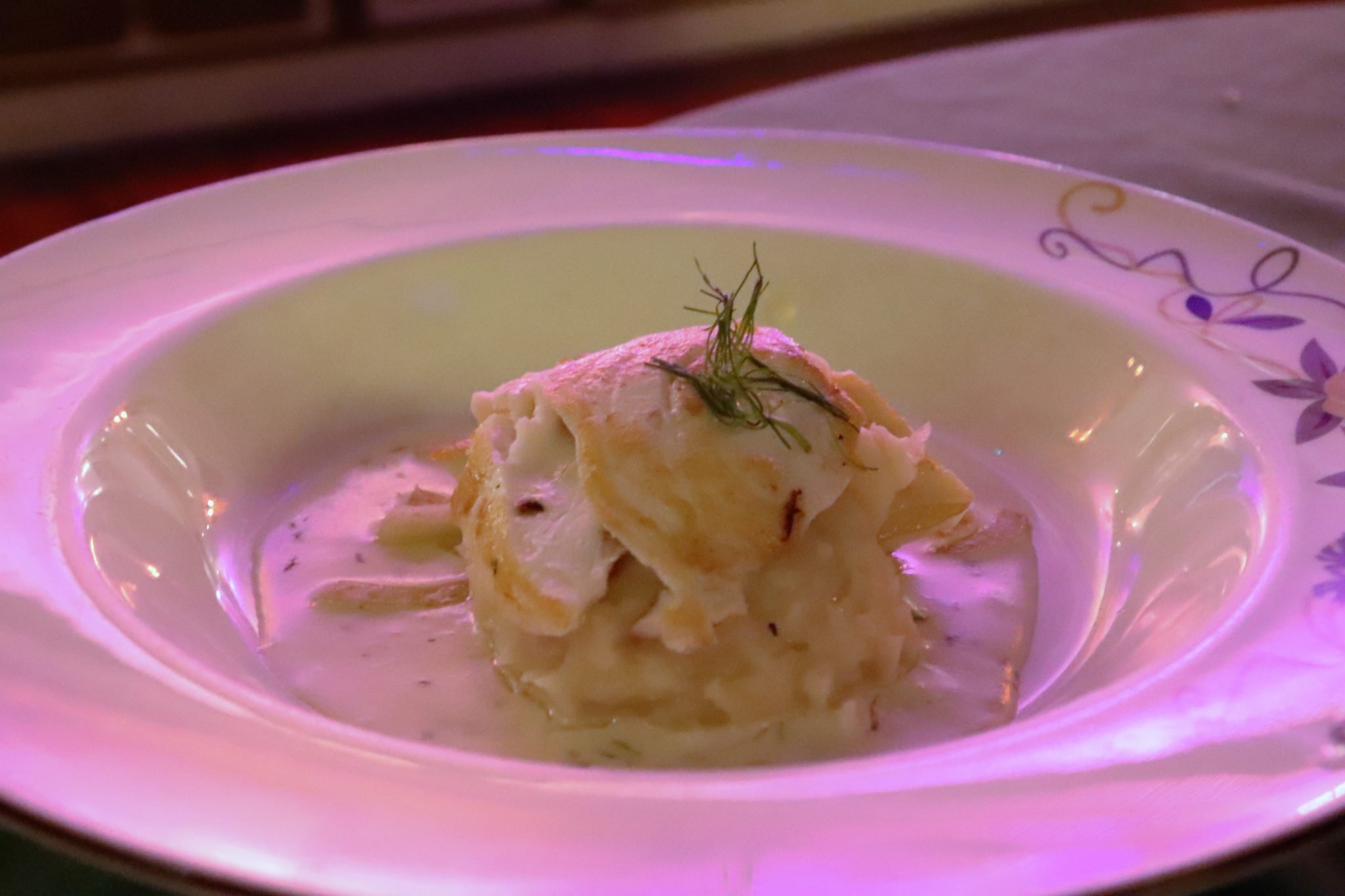 And then it was time for dessert! Jason ordered the Louisiana Root Beer Creme (served with cherry parfait and honeycomb crunch). We didn’t know what it would be from the description (a cake? ice cream?) and frankly we still don’t really know what it was after ordering it and eating it! The flavors were nice and it was a very light dessert and definitely something different. 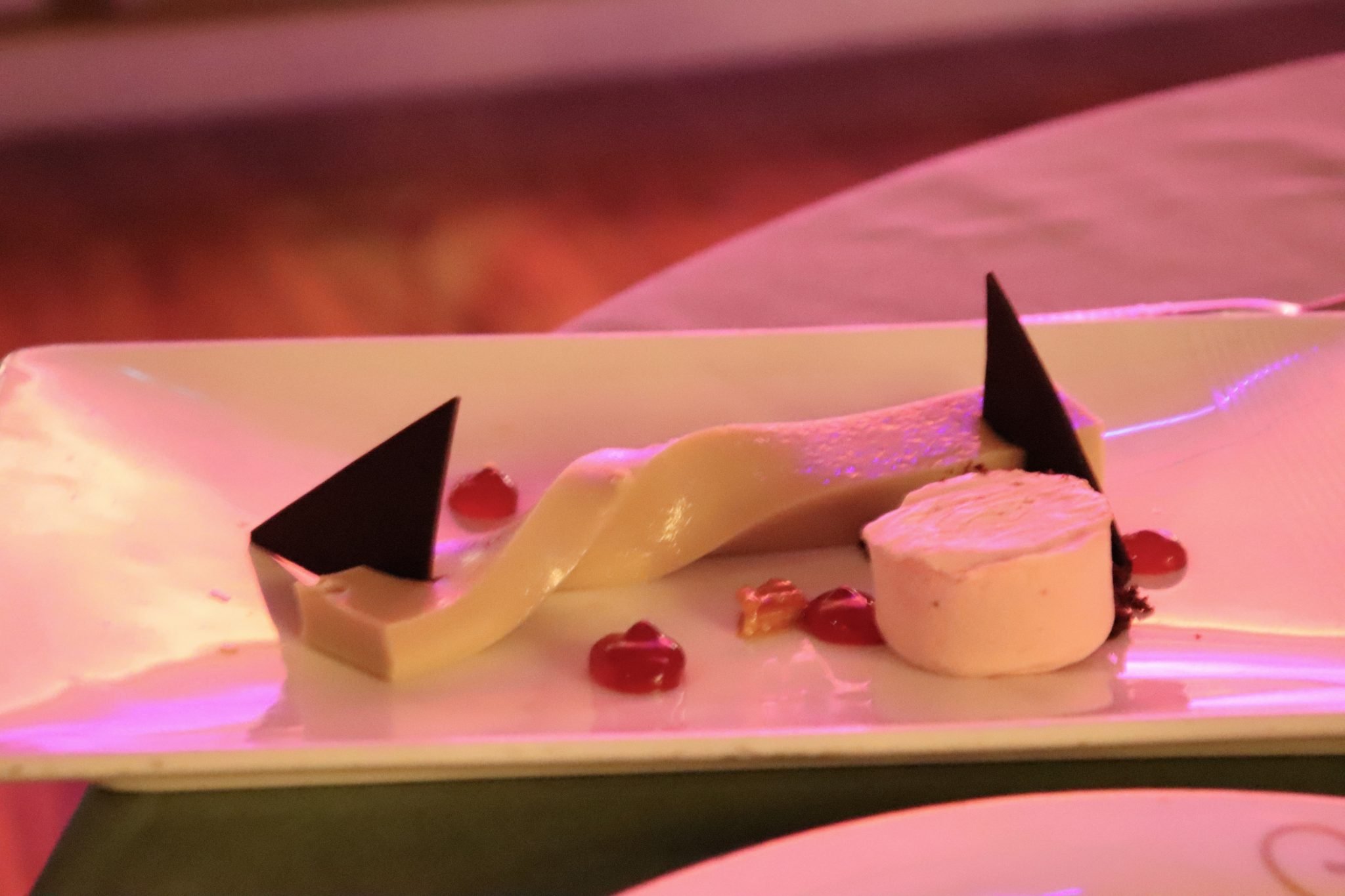 Since we were in Alaska I had to go with the Baked Alaska (sponge loaf layered with chocolate, strawberry, and vanilla ice cream covered with burnt meringue – Alaska only)! Honestly, this is basically just ice cream, there wasn’t much of the meringue. It was still tasty though! 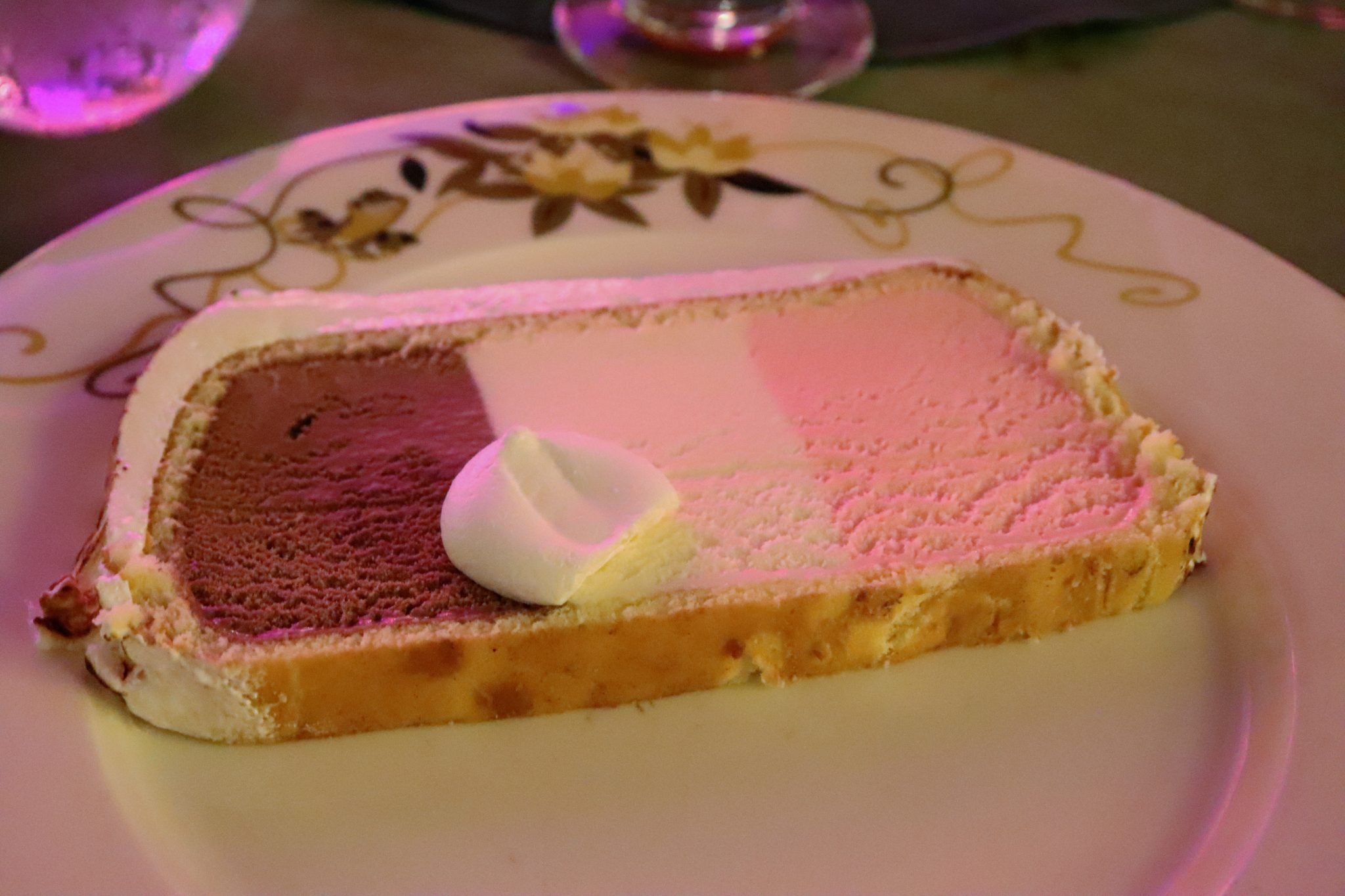 Phew, that’s a lot of food! All in all we enjoyed our time in Tiana’s Place very much. I think they could do even more with the food – I’d love to see some dishes that are really flavorful and have a little spice to them (you could still leave “Americanized” items on the menu too, but real creole/cajun flavors would be great!). And the atmosphere was fantastic. If this was a restaurant in Disney World I know we would be back many times.

Have you ever visited Tiana’s Place? What would you most like to try?