You are here: Home / At Home / Throwing a Wreck-It Ralph Themed Birthday party 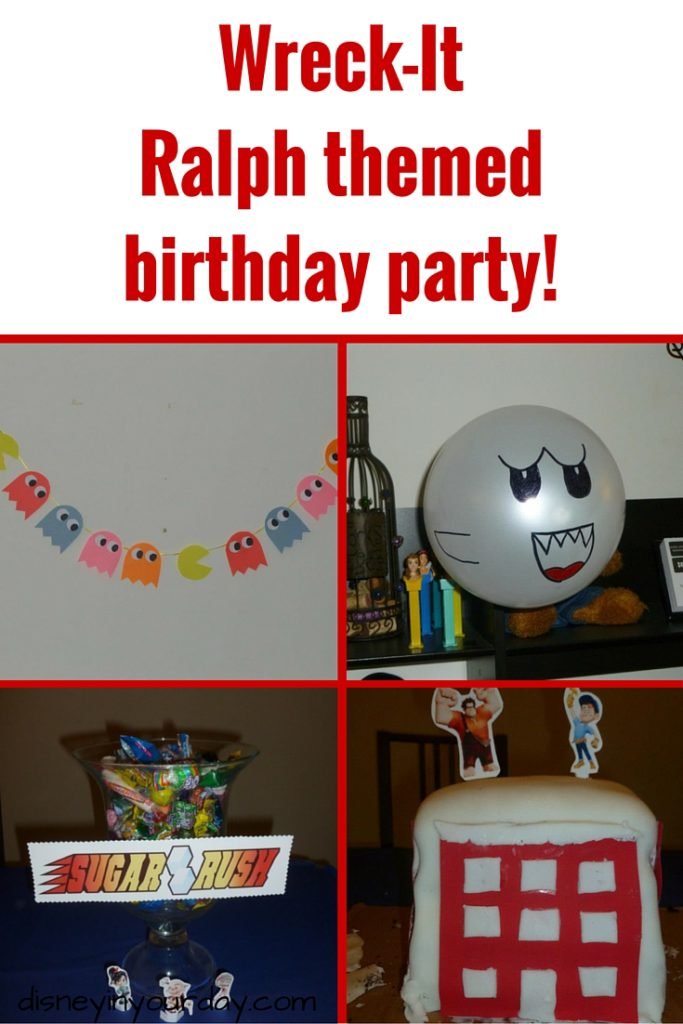 I have a confession to make:  I’m 27 years old and I love throwing myself themed Disney birthday parties.  They are pretty informal – I get a group of friends together to watch a Disney movie, decorate my basement a little bit, and make some foods related to the films.  The last two birthdays I did Beauty and the Beast and Frozen.  Before that I also had a Wreck-It Ralph party and I realized that one was before I started this blog, so I never got the chance to share it with you here!

Sadly my hard drive crashed a year ago so I lost a lot of pictures from this party – the only ones I have left are the ones I shared on facebook.  But it still gives you a good glimpse into what I did.  Hope you enjoy!

My husband is a big video game nerd, and I enjoy some of the classic games, so I focused on some of my favorites for this Wreck-It Ralph party to use as decor.  There were some really complicated things on Pinterest, but I did find a couple that I think worked quite well!  The first is this pac-man garland.  There was a blog with a template for the ghosts and pac-man, so it was just a matter of trace and cut!

I also created “Boo Balloons” from the Mario games.  I used white balloons, blew them up, and then drew faces freehand on them using sharpies.

And of course the party wouldn’t be complete without Sugar Rush involved!  The easiest way to add some Sugar Rush was, well… candy.  I decided to put a bunch of assorted candies in a jar that I had and decorate it with the Sugar Rush logo and some little stand up figures I printed.

We just had a few basic food items like chips and stuff, but the main centerpiece was the cake.  Of course I had to try and replicate the cake from the movie!  Now, as you can probably tell by looking at it, I am no master cake decorator.  I’d never used fondant before.  But I made a rectangular cake, covered it in frosting, and then tried my best to cover it with fondant.  It’s not terrible, right?  Adding Ralph and Felix on the top makes it work a lot better.

We also had two specialty drinks – one was a cherry sprite drink, and the other was root beer.  To make that special I googled the Root Beer tapper logo, printed it, and taped them onto the soda bottles that we had!  This was a super easy thing to do and a lot of people really liked it!