You are here: Home / Disney Movies and TV / Thoughts on the Fox and the Hound 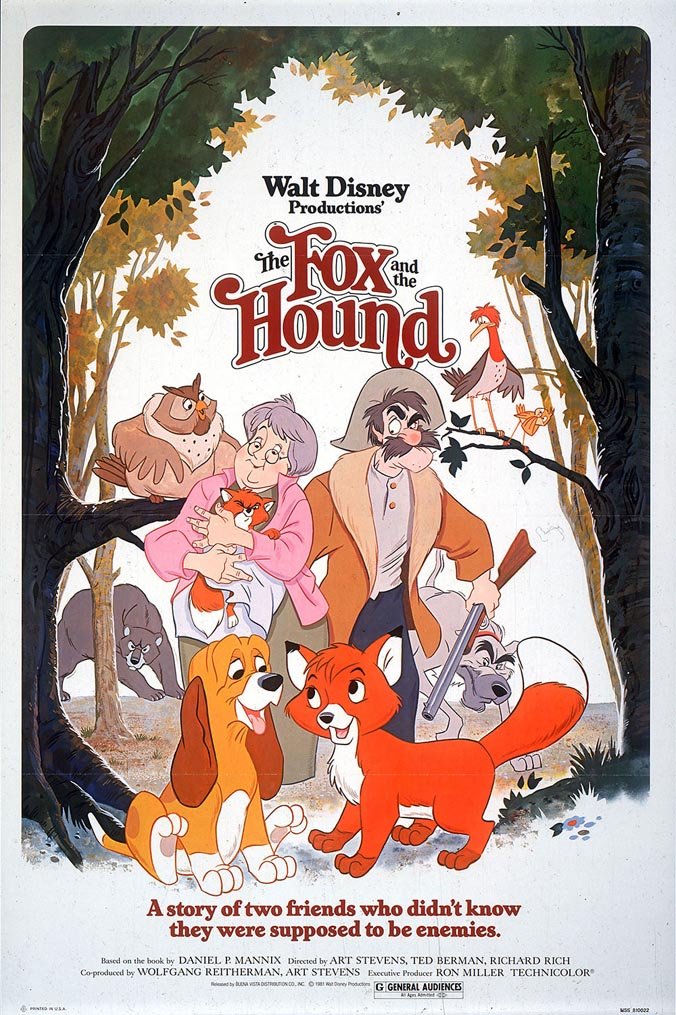 Highlights: “Copper, you’re my best friend.”
“And you’re mine too, Tod.”
“And we’ll always be friends, forever, won’t we?”
“Yeah, forever.”
For me, these lines from this movie really capture a lot of what I think of when I think of classic Disney films and movies I watched a lot when I was a kid.  That scene is just so endearing, and full of childhood innocence, and just so sweet.

Low points:  I always felt like the friendship was slightly uneven.  Even though I know that Copper is learning to be a hunting dog and has to deal with that part of his nature, he just never seemed to like Tod as much as Tod liked him.  Copper kind of turns his back on him. Even though he lets Tod go once, he gets so upset about what happened to Chief that he takes it out on Tod. Then Copper goes again to help kill Tod in the game preserve.  Despite all that, Tod still chooses to fight a BEAR to save Copper’s life.  He could have easily walked away, knowing he was keeping his own life and the dog getting attacked by a bear was trying to kill him anyway.  Sure, Copper finally defends Tod at the end, but he had better, after what Tod did for him. 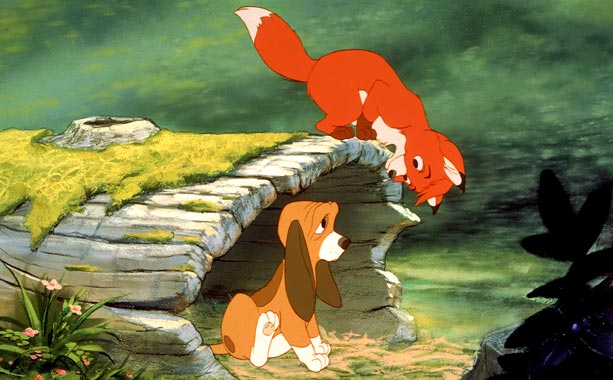 Music:  The only character who really sings is Big Mama, and she has a few songs.  Most are forgettable but there is one stand out – “The Best of Friends.”  It’s the iconic song that I always think of when I think of this movie.

Villain: Our villain is Amos Slade, who is pretty much insane.  He’s kind of a scary villain because he’s just so crazy.  He is so intent on killing Tod, no matter what.  The thing is, Tod didn’t even do all that much.  He appeared to be attacking his chickens one time, but I guess that’s enough to get Amos on the warpath.  His dedication is frightening.  He tries to kill her pet, break down her door, and shoots all over the place.  And then he goes hunting in a game preserve, where it’s not allowed.  What a jerk.  And then he and the old lady are being buddy-buddy at the end?  I don’t get that.

Fun Fact:  This film is actually based on a novel by the same name.  In the original novel Chief dies, and that’s how the original screenplay was written as well.  However, the company then decided they didn’t want an on-screen death in this movie, so they changed it so Chief would live. 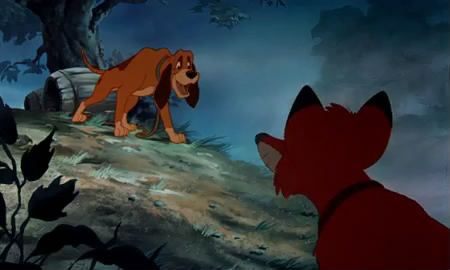 Where in the World: Try as I might, I really can’t come up with anything.  They may make an appearance somewhere… maybe in some art work in the parks or the resorts, but I don’t know of anything off hand.  It seems this film has been pretty neglected by the theme parks. If anyone has a reference let me know!

My rating:  7.5 out of 10.  While it’s not one of my favorites, it’s definitely a Disney movie I enjoy watching.

What do you think of the Fox and the Hound?