You are here: Home / Disney Movies and TV / Thoughts on Tangled

Highlights: Tangled has a lot of great things going for it. The CGI and animation of the film is beautiful, and Rapunzel’s hair is all sorts of awesome. I love the characters and how none of theme seem two-dimensional – Rapunzel, Flynn, Mother Gothel – they are all well developed and interesting characters. There are lots of funny moments too, and the scene at the Snuggly Duckling is great. The movie manages to be funny, entertaining, sad, emotionally touching, and ultimately give us a happy ending. Can’t ask for much more than that! 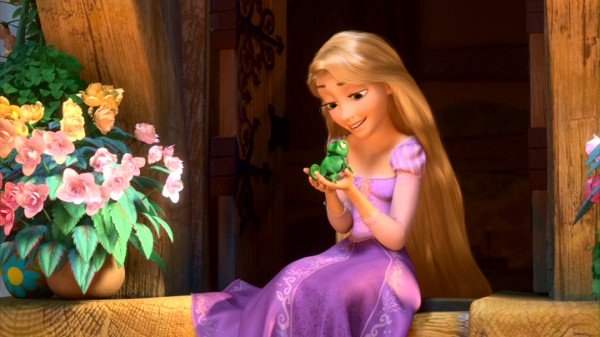 Low points: Jason referred to this movie as an “idiot plot” – the plot couldn’t have happened unless everyone involved is a bit of an idiot. (And he is saying this as someone who loves this movie, it’s probably his favorite Disney movie!). It’s true that there are a lot of flimsy coincidences – Flynn happens to come across Rapunzel’s tower while he has the crown, Mother Gothel doesn’t have a great plan and kind of lucks out with the Stabbington Brothers, etc. I can see how these things might bother someone else but it doesn’t affect me. If anything I would just say that I enjoy the soundtrack but think it could have been a little stronger.

The music: It’s a pretty solid soundtrack, and I like some of the songs, but the soundtrack is probably not in my top 5. I enjoy “When Will My Life Begin” a lot, and “I’ve Got a Dream” is a lot of fun. “I See The Light” is really beautiful and probably my favorite Disney duet. It just doesn’t have that big showstopping number for me – there’s no “Be Our Guest” or “Under the Sea.” Still very good music. 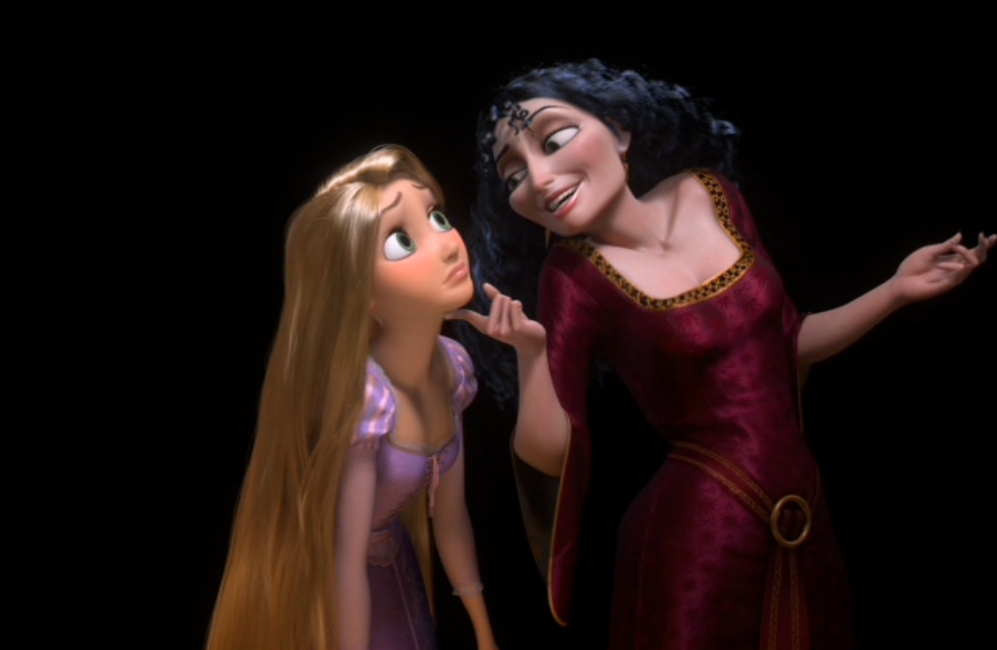 The villain: I find Mother Gothel to be an extremely interesting villain, and I wish there could have been a way to see more of her thoughts and motives.  She pretends to love Rapunzel and visits her every day for 18 years… even though you know it’s just for the magic her hair has, you wonder if there’s any chance she could truly care for Rapunzel after all of those years.  But no, though she does seem more real than many villains, she is completely malicious but puts on a caring face.  She obviously does not care what happens to Rapunzel personally, she only cares about maintaining her hair.  She ruins Rapunzel’s life in multiple ways, all so she can be young and beautiful. She also seems to have no remorse for any of this, making her a pretty evil villain.

Fun fact: Disney wanted to make sure boys weren’t turned away by another “princess movie,” so they changed the title from Rapunzel to Tangled and gave Flynn Rider a much more prominent role, including narrating the film. In fact, I remember seeing previews and they were mostly of Flynn. Disney faced some criticism for this, with some saying that it was gender discrimination with statements like “Can you imagine if Disney…switched a movie title so it wouldn’t risk highlighting a male star?”  Disney denied this, saying as they worked on the film more they just found that Flynn was just as important to the story as Rapunzel and wanted to make the title represent that. 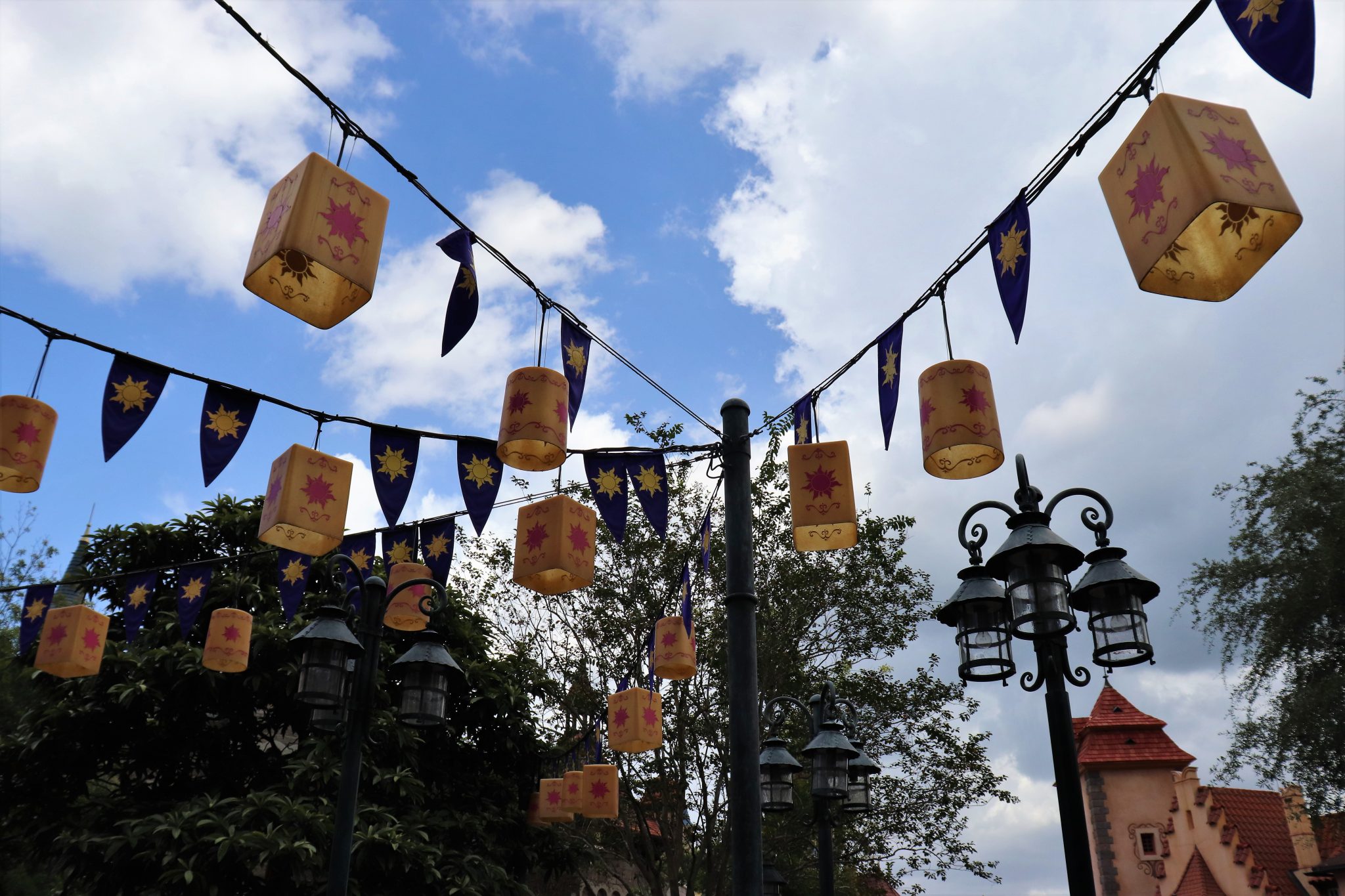 Where in the World: While Rapunzel doesn’t have a ride yet, she does have bathrooms! The Rapunzel restroom area in Fantasyland is probably the most beautiful bathrooms you will ever see. They even sometimes offer a photopass opportunity at night holding one of the lanterns. You can also find the characters multiple places. Rapunzel and Flynn meet at breakfast at Trattoria al Forno, and Rapunzel does meet and greets at Princess Fairy Tale Hall. There’s a whole portion of the current castle stage show (Mickey’s Royal Friendship Faire) that features performances from Tangled, and the characters have a float in the Festival of Fantasy parade.

My rating: 9.5 out of 10. I think this one is probably in my top 5 but I don’t love it quite as much as Princess and the Frog, Beauty and the Beast, or The Lion King.

Have you seen Tangled? What do you think of this movie?