You are here: Home / Animal Kingdom / Thoughts on Pocahontas

Highlights:  Pocahontas has lots of the elements that I love about an animated Disney film. It’s both fun and serious. There are funny moments and funny characters (most notably Percy, the dog, and Meeko, the raccoon). It has some good music. I both like and admire the main character. And finally, it has some mystical/magical elements to it as well. We have Grandmother Willow, the talking tree, and Pocahontas’s amazing ability to speak English. Maybe that’s a bit of a cop-out on Disney’s part, but the movie certainly wouldn’t be as exciting if we had to sit around and watch Pocahontas learn English. And finally, the movie has a good message – not only about respecting nature, but also about how we judge other people. 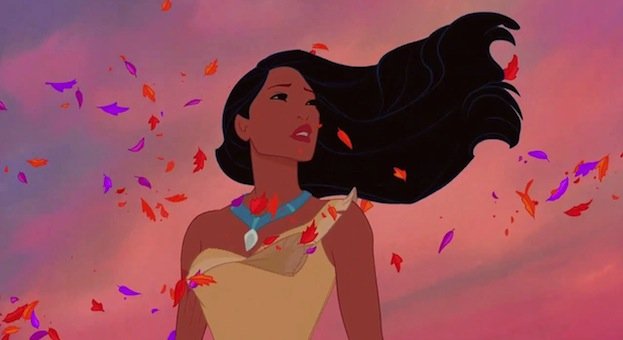 Low points:  Despite all of this, Pocahontas is not one of my favorite Disney movies, and that’s because of the ending. This Disney movie doesn’t have a happy ending, and for me that’s one of the things I need in a Disney movie. I love Disney because they’re feel good, happy movies. Sure, John Smith doesn’t die, but he and Pocahontas aren’t together. And yes, the settlers leave, but if we think about the history and what we know, all the future holds is more bloody battles, more settlers invading, and the Native Americans losing almost everything. The least Disney could do would be to spare John Smith, or have the Native Americans cure him, or something so they could be together! With a Disney movie, I want a sappy romance and the happy ending.  Also – it doesn’t help when you watch this movie after having a bad day and two glasses of wine, and you’re sobbing and the ending saying “people who love each other should just be together!” 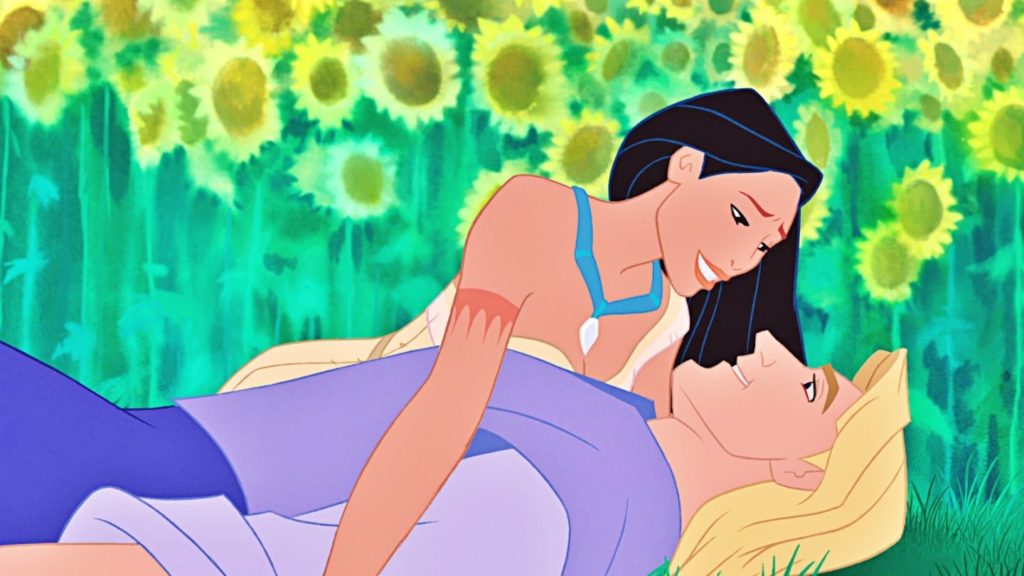 The Music:  Pocahontas has pretty good music. The score is by Alan Menken and Stephen Schwartz. It doesn’t have quite as many hits as, say, The Lion King or Aladdin, but there are a few good ones. “Colors of the Wind” is by far the best song in the movie and one of my favorite Disney songs.  I love the lyrics but especially: “you can own the earth but still, all you’ll own is earth until you can paint with all the colors of the wind.”  Next I would say “Just Around the Riverbend” is pretty good, with the rest being not so memorable. There was a duet between John Smith and Pocahontas and despite having seen the movie a number of times before, I totally forgot that song existed.  Though I will add that apparently Mel Gibson did his own singing, and it wasn’t bad. 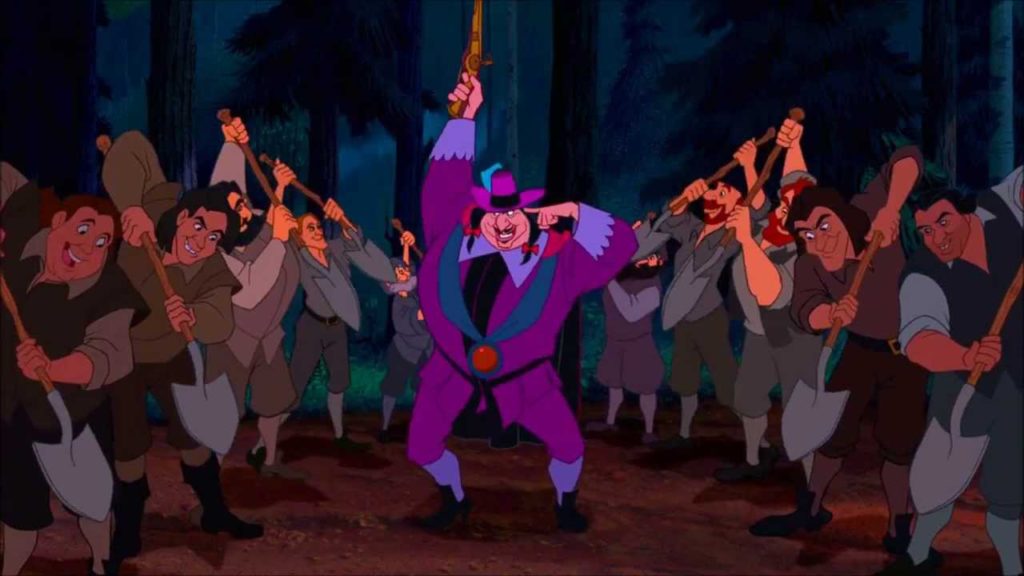 The Villain: As far as villains go, Ratcliffe is just so-so. Yeah, he’s greedy and he’s a jerk, but he doesn’t do much till the very end, when he accidentally shoots John Smith. But also, nothing much really happens to him at the end – no dramatic death scene, just tied up and thrown in the boat. Really as far as Disney villains go he’s pretty lame, but I think much of the “evil” in this movie actually comes from how we judge one another and how we treat people that are different from us, so they didn’t need as much of a villain.

Fun fact:  Yes, this movie is based on a true story, though it does stretch the truth quite a bit. If you’re not familiar with the history, Pocahontas did exist, and she did befriend the settlers, though she was probably about ten years old at the time. So there was no romance between her and John Smith, and historians debate the story about whether or not she actually saved his life. I’ve seen the film (and Disney) criticized for romanticising these events, though I think given the ending that’s hard to agree with that fully. 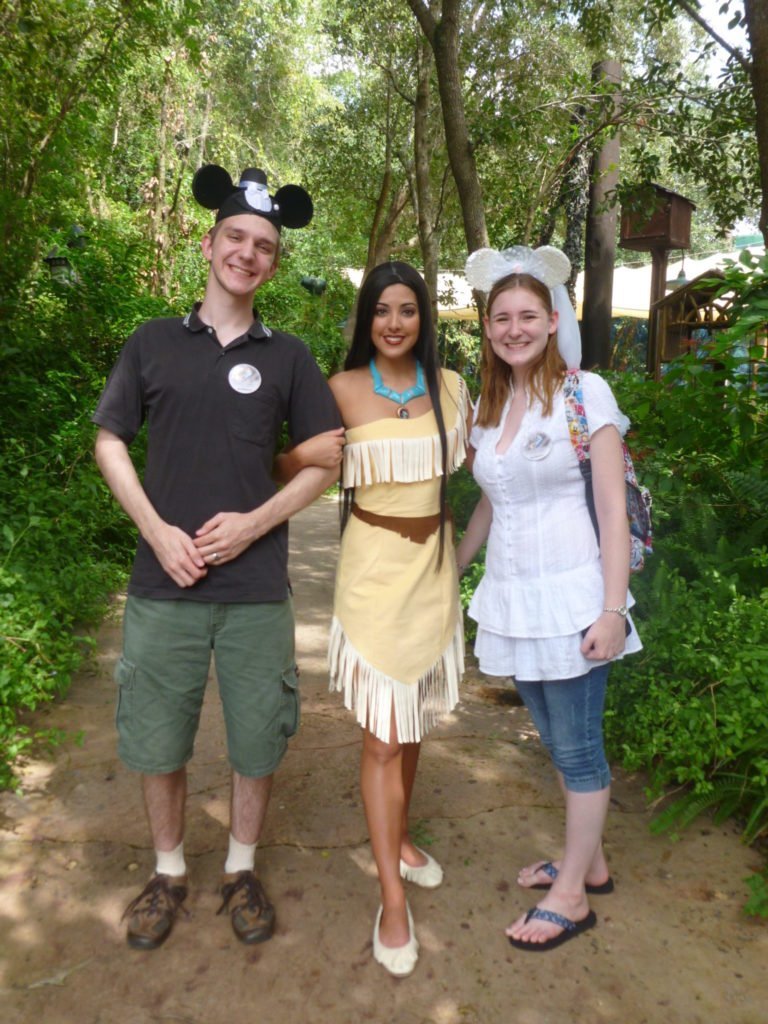 Where in the World: There used to be a show in the Animal Kingdom called “Pocahontas and her Forest Friends,” which taught about the importance of animals and nature, but it stopped in 2008. Pocahontas herself does meet and greets at Animal Kingdom, and she makes an appearance in Hollywood Studios’ show Fantasmic!

Overall:  I’ll give it a 7.5 out of 10.  I enjoy it, and for me the strongest pieces of this movie is the important message it has about how we shouldn’t judge others just because they are different.  It’s one of the things that I feel most passionately about.  Colors of the Wind is a wonderful song, but otherwise there isn’t a ton in this movie that stands out for me.

How do you feel about Pocahontas?