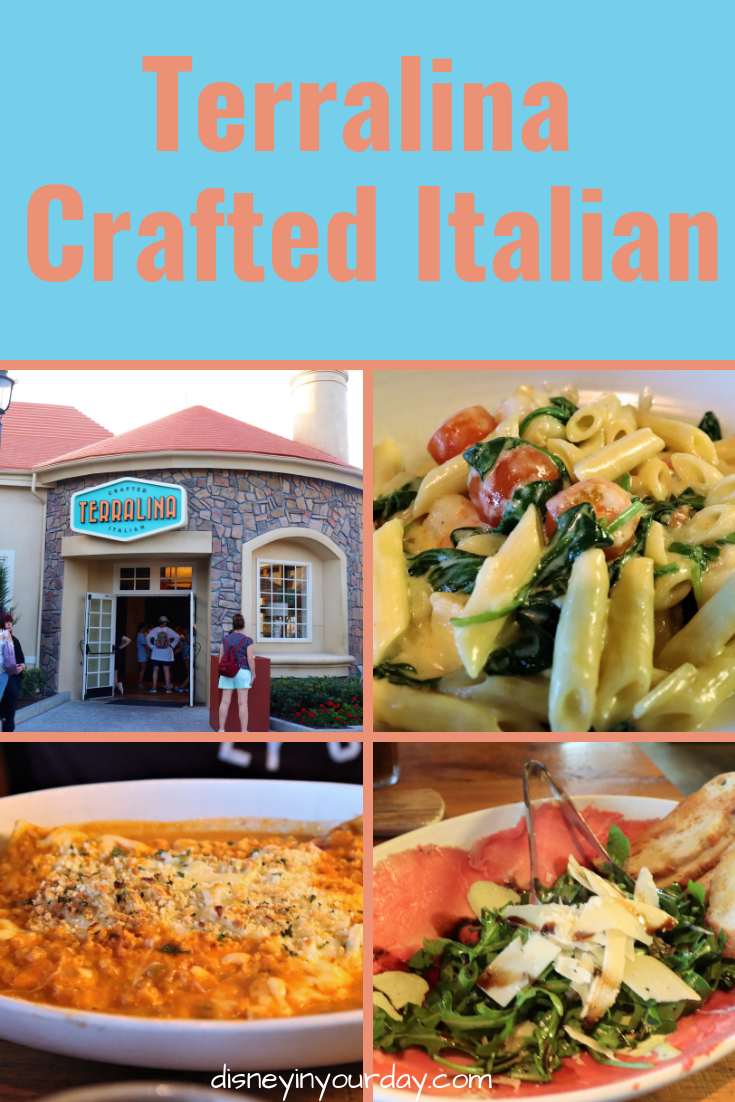 On my most recent trip to Disney I decided to try another Italian place – one of the newest, Terralina Crafted Italian. I need good places to carb load before a Disney race, and since the Princess Half Marathon was the next morning it seemed like the best time to try it! Terralina is located in Disney Springs, right next to Paddlefish – it used to be Portobello’s. 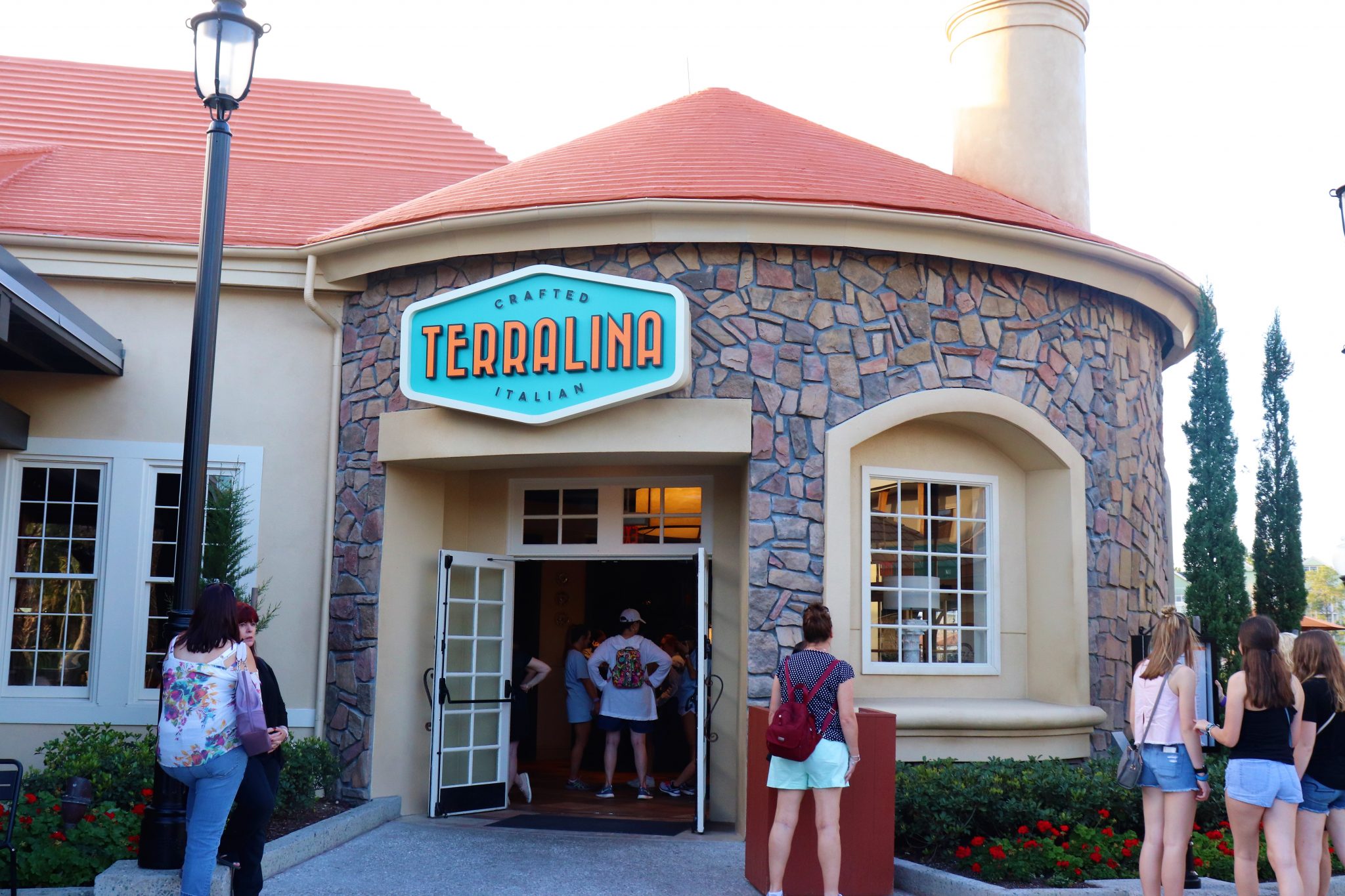 The inside is nice but nothing special. They also have outdoor seating available and asked if we had a preference. We said whatever was available first (as they were already running about 15 minutes behind the reservation times).  I rather wish we’d gone with outside, because it was gorgeous out for February – and this was one of those restaurants where they had the air conditioning cranked up so I was freezing in my t-shirt.

For a beverage I went with an unsweetened iced tea and my companion got an IPA. Normally a Miller Lite drinker, he was being adventurous on this trip and I was so proud! 😉 It was the I-4 IPA made right in Orlando and he enjoyed it a lot. They also have an extensive wine list and some fun sounding cocktails.

While they bring you bread and oil, we decided to also share an appetizer. We would have loved to try the antipasti tower but it serves 4, and alas – we were only 2. They should make a smaller one! Instead we went with the Carpaccio (baby arugula, mint-basil aioli, shaved parmesan, fried capers, grilled crostini): 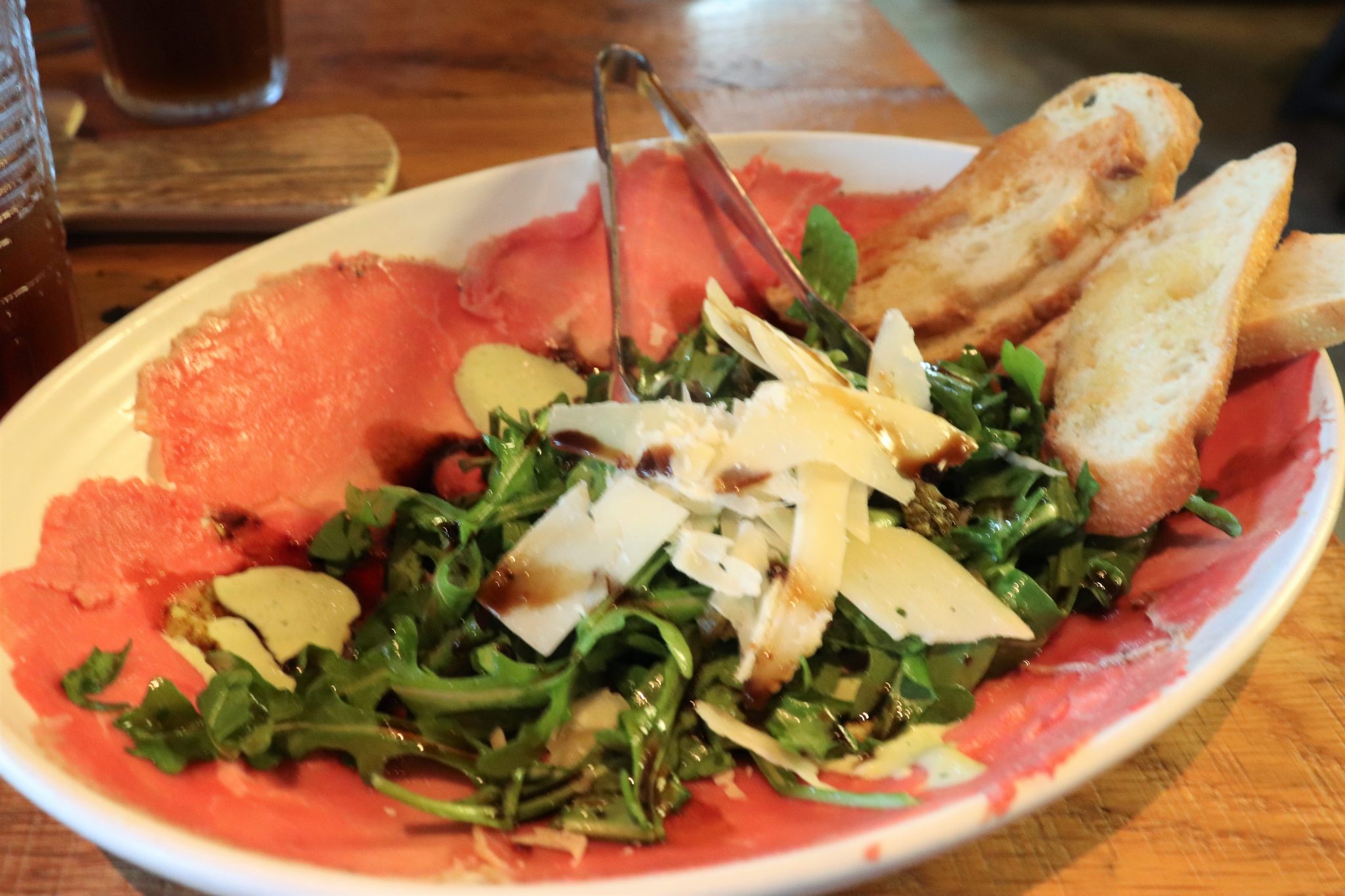 Such a good choice! While I enjoyed my entree this was my favorite thing of the night. The flavors were unique and went really well together. I loved the mint-basil aioli, and the balsamic. I’m not sure what the difference is but it tasted similar to prosciutto, which I love.

The only downside?  They brought the appetizer and then less than 5 minutes later brought our entrees, which I hate. If we’re ordering an appetizer I like some time to enjoy it before getting the next round of food. We ended up eating the entrees first and then the appetizer after, since they were hot and this was a cold dish.

For my entree I had the penne and shrimp (spinach, cherry tomatoes, parmesan cream): 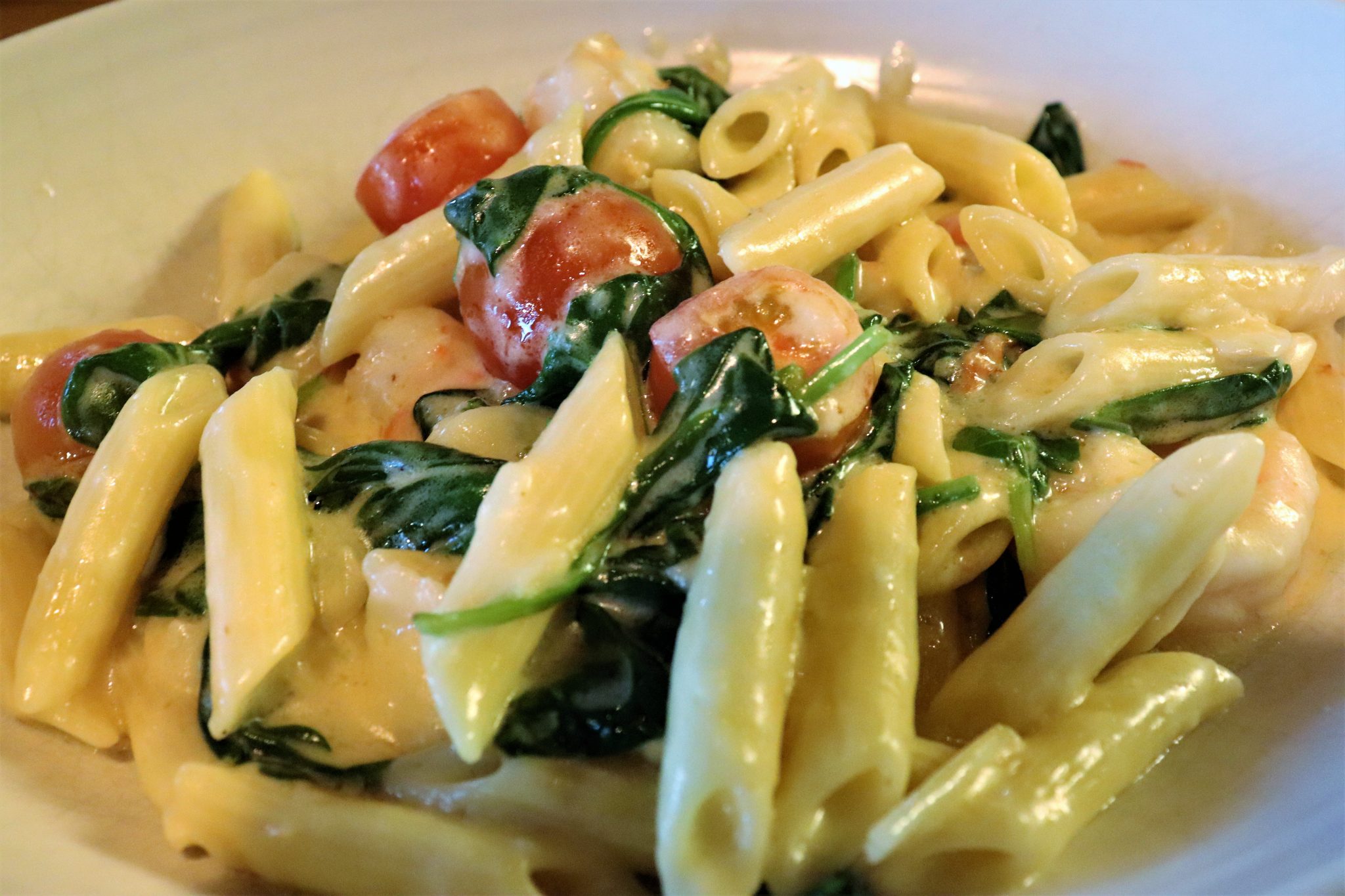 I did enjoy this – the shrimp were large and tasty, and the cream sauce was very good. This might be a personal thing but I thought the dish could have used more salt to bring out the flavors. It was just slightly bland to me. I’m a bit of a salt monster though so I often add salt to things when I have the option, especially pasta.

There were so many good sounding items on the menu my friend had a little trouble deciding, but he ultimately went with the Seafood Cannelloni (housemade pasta, fish, shrimp, scallop, mascarpone, lobster cream): 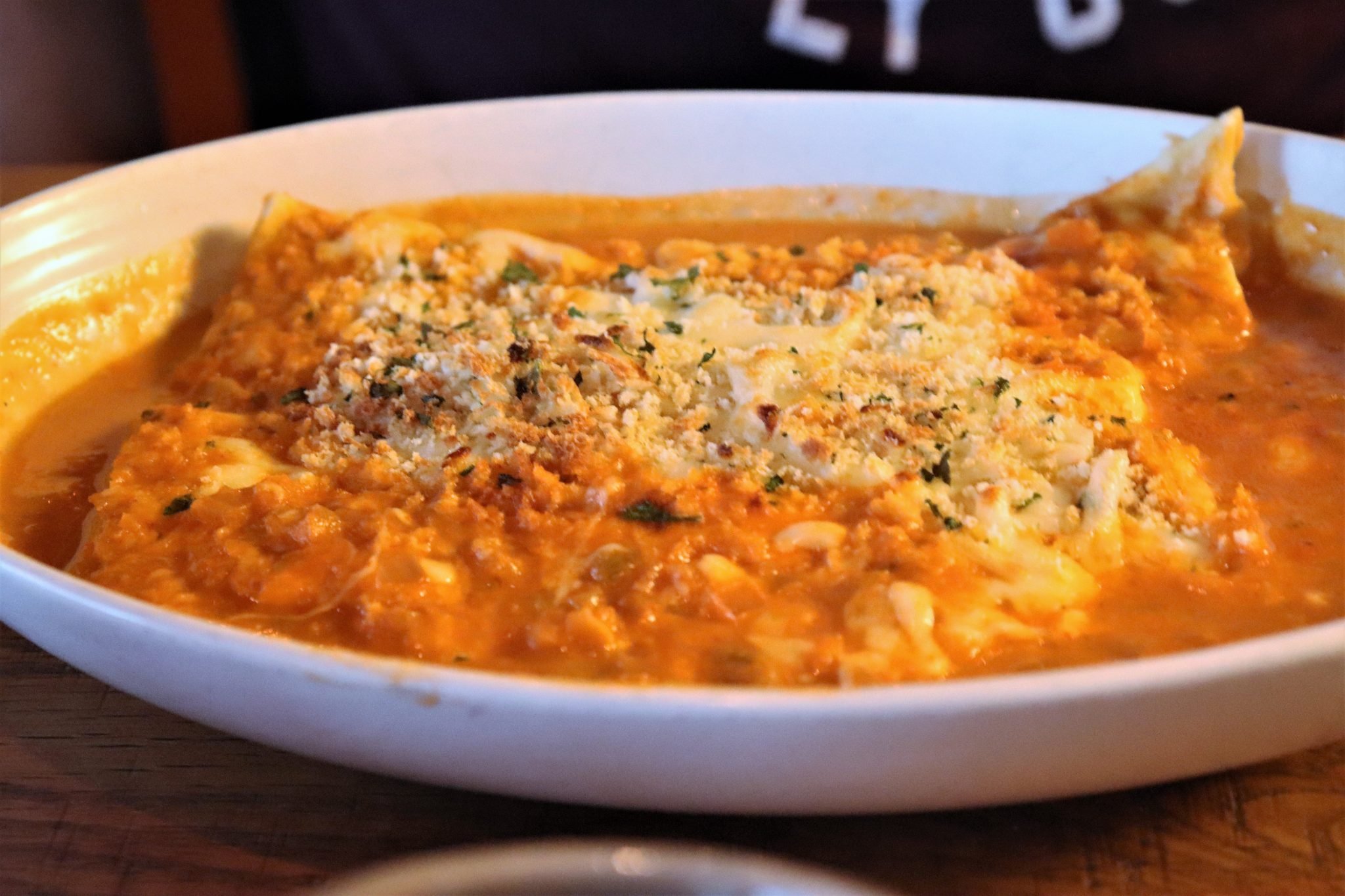 It looked a little different than we expected but it tasted great. The lobster cream was delicious just with the noodles, but it was also packed with seafood.

We were offered dessert but decided to pass, both due to the fact that we were fairly full and I was just freezing with how high the A/C was in there. I normally carry a sweater with me for situations like that but that day I just didn’t grab it and I totally regretted it.

All in all I thought the food here was very good. It’s some solid Italian, and the clearly the carb loading worked for me because I got a new personal record in the half marathon the next morning! The Carpaccio appetizer was really the highlight of the meal. I would come back if I wanted some Italian and Disney Springs was in the plans, but I wouldn’t necessarily go out of my way to eat here. And I’d bring a sweater!

Have you tried Terralina Crafted Italian? What do you think of it?