You are here: Home / At Home / Tangled themed birthday party! 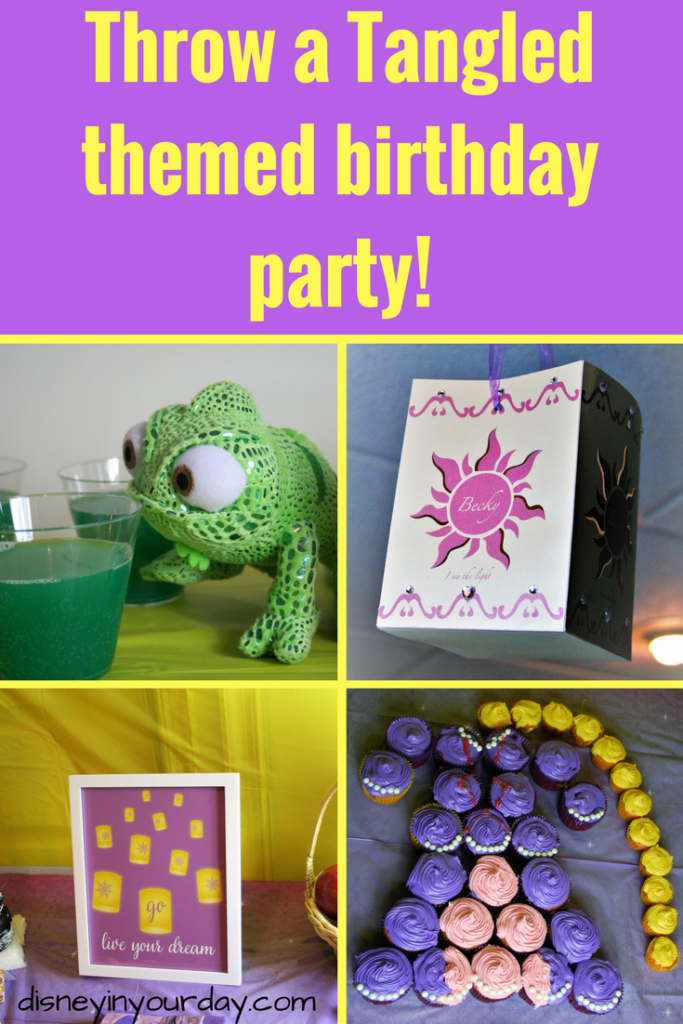 I just started my last year in my 20’s, and to celebrate my 29th birthday party this year I decided to throw a Tangled themed party!  It’s one of my favorite Disney movies, and I think it has a lot that you can do to throw a good themed party – plenty of iconic characters and symbols to go into the decorations.  I had fun finding ideas on Pinterest and some great resources on Etsy too, so I’m excited to share them with you! 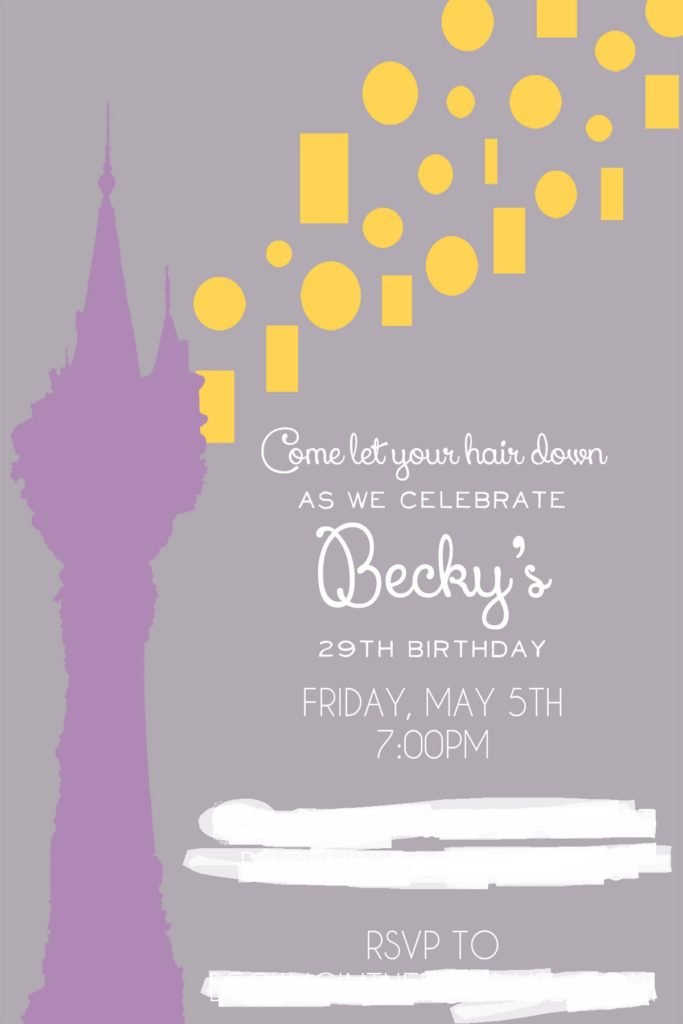 When it came to invites, I knew I wanted to head straight to Etsy, because there are some amazing artists on there that specialize in Disney stuff.  A lot of it feels very young and just for kids (which is understandable!) but I was thrilled when I discovered these printable Tangled invitations from ERR Designs.  It’s elegant but fun.  Plus it’s very reasonably priced since it’s a digital download.  I could share it on my facebook event but also print it onto cards to have physical copies as well. 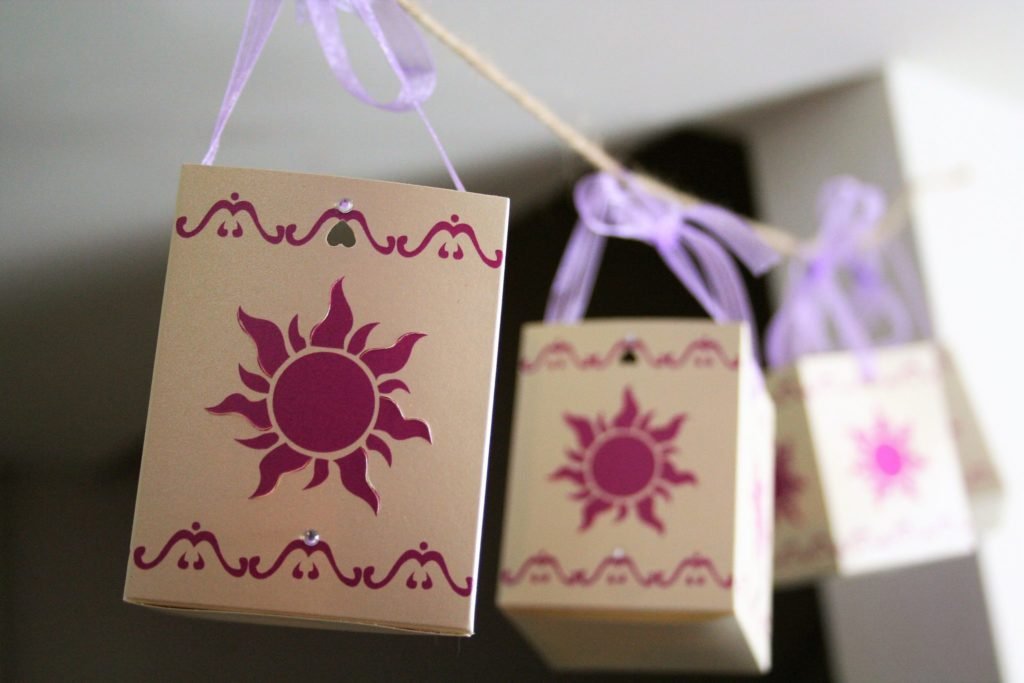 Of course, no Tangled party would be complete without lanterns as some sort of decoration.  They’re pretty iconic!  I saw some cute ones on Etsy, but none as beautiful as these ones from Jumping Olives.  And honestly, the photos don’t even do them justice.  They are made of this shimmery sort of cardstock paper with vivid color and printing, and small gemstones.  They are easy to assemble and come with little tea lights to put inside to light them up. I hung them right to the entrance of the room so they were the first thing everyone saw when they came inside. 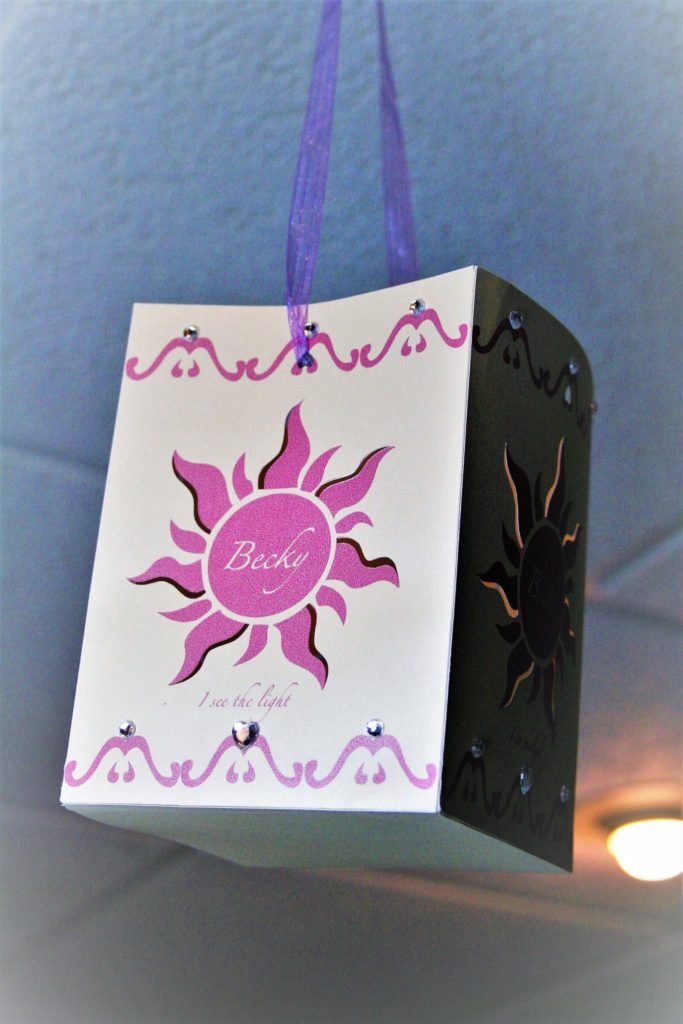 In addition to the smaller string of lanterns, I got one big one to hang right in the center of the room.  You can get this one customized – I had my name put in the center of the sun and the quote “I See the Light” underneath.  It’s so pretty that two weeks later it’s still hanging from the ceiling of my basement because I don’t want to take it down! 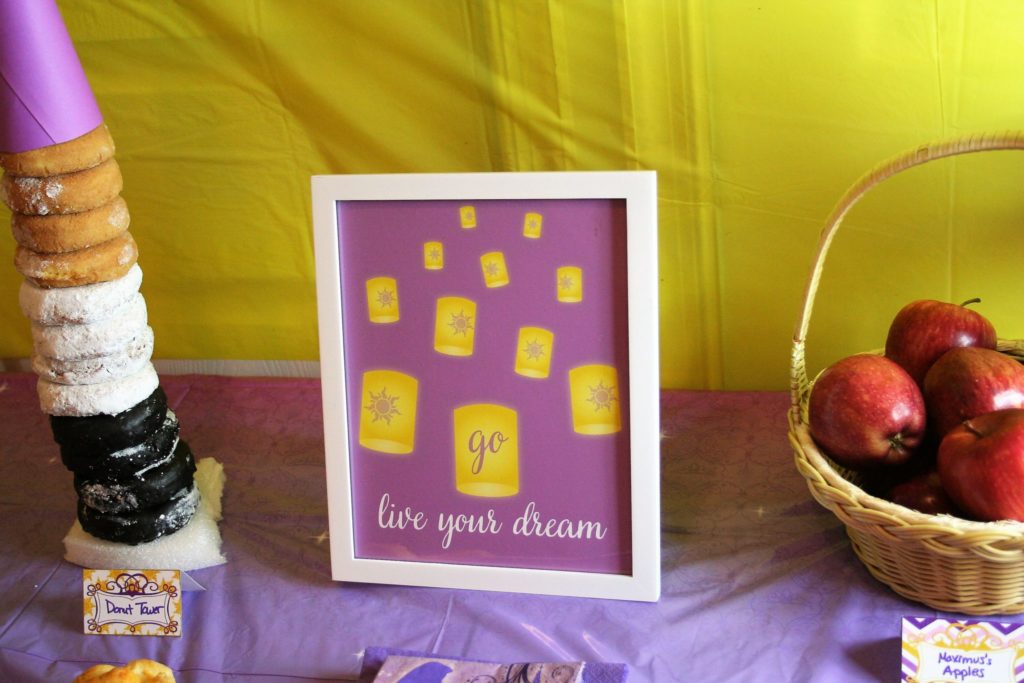 My other favorite decorative item was this “go live your dream” print from Enchanted Type.  I absolutely love her work and have purchased stuff from her before.  She has gorgeous designs and it’s affordable too (I used one of her prints last year at my Princess and the Frog party).  I get greeting cards from her because they’re cheaper (and prettier!) than what you’d get in the stores.  This print was available as a greeting card, but she was more than willing to make it into an 8×10 for me.  I put it a frame and it made a great centerpiece on the food table! 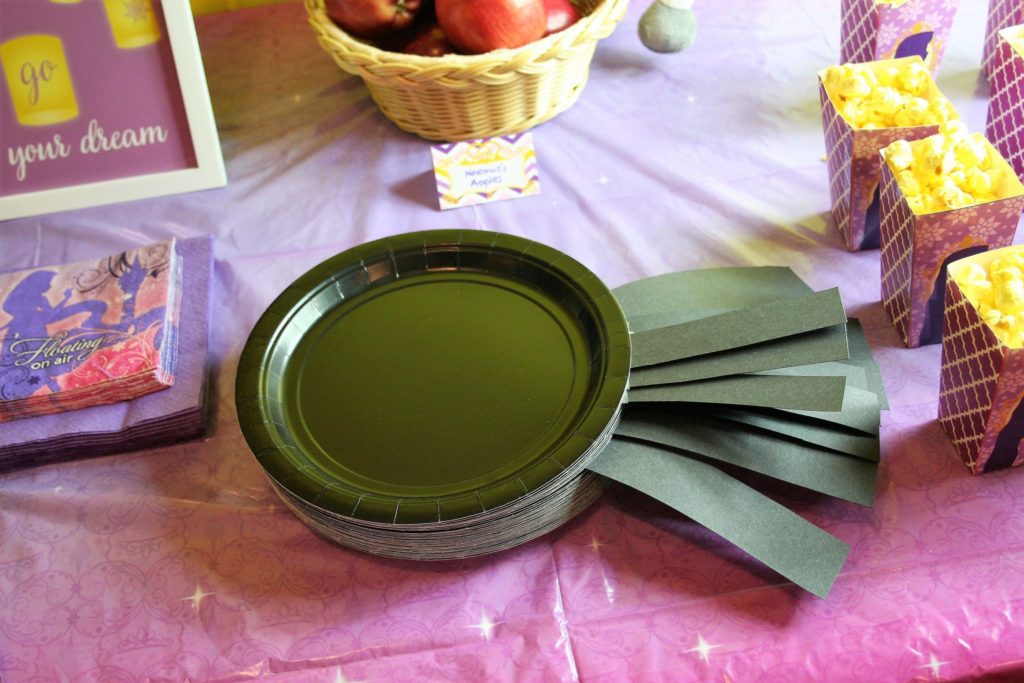 A few other fun touches: I cut strips of black paper and taped them on the back of black paper plates to make the plates all look like “frying pans.” 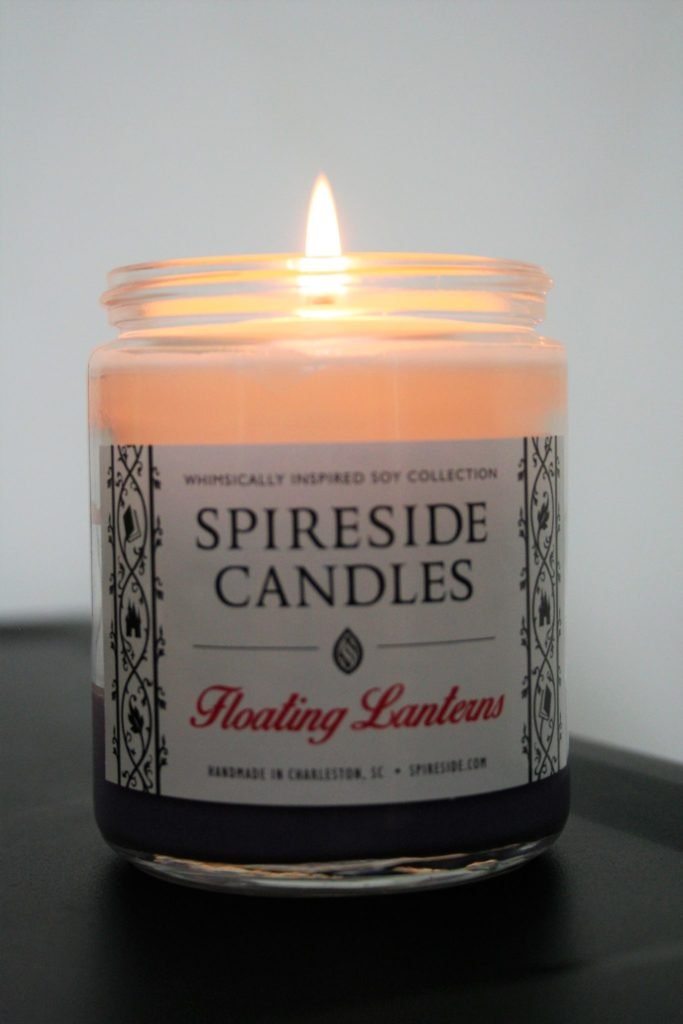 We were burning this candle from Spireside Candles during the party too.  It’s called Floating Lanterns and it has three layers to it – clean river water, a floral blend, and then a fresh blend of water and flowers.  Pretty and it smells great too! 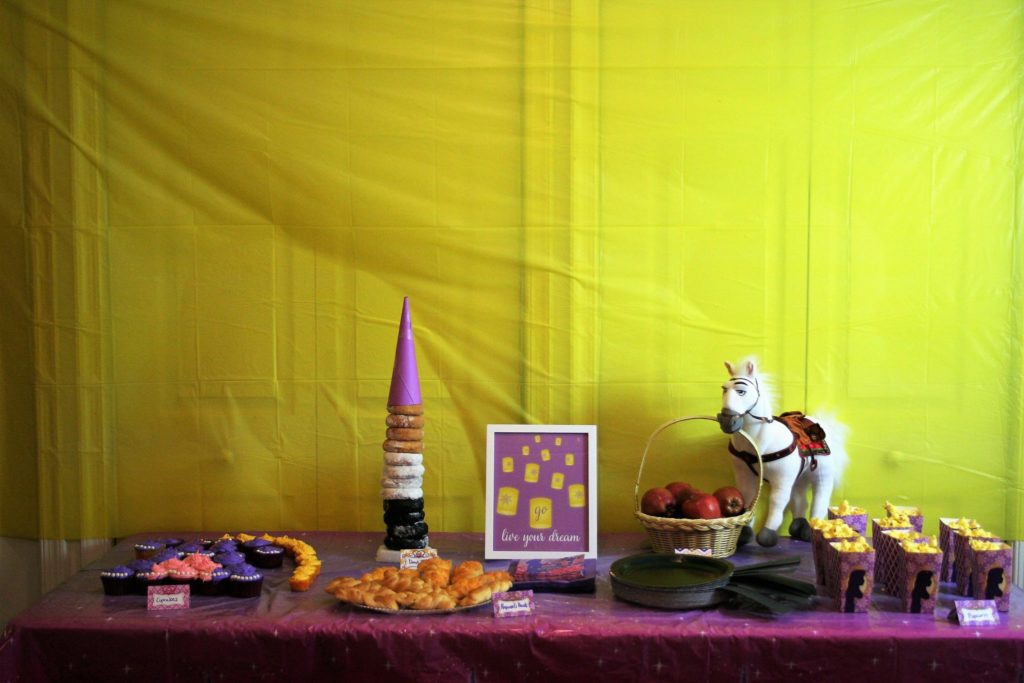 In order to make everything look cleaner I put tablecloths over the tables but also hung them on the walls behind them to give a pop of color.  My stuffed animals of Pascal and Maximus hung out in various places to go with the theme as well. 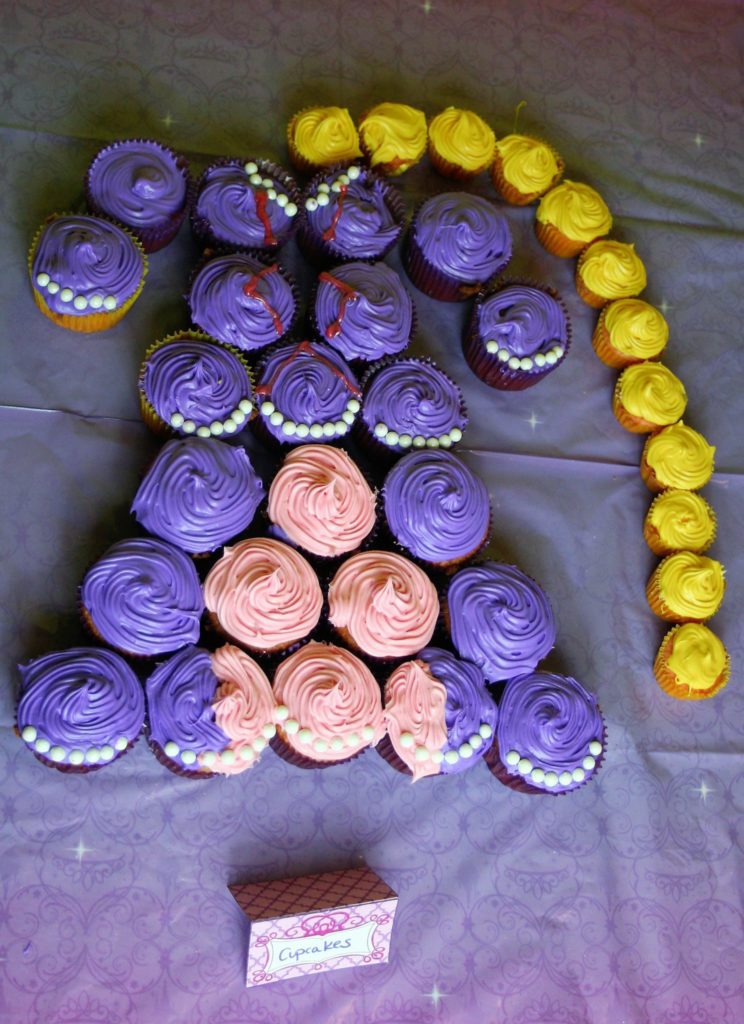 Of course no birthday party is complete without some sort of cake or cupcakes, so I made cupcakes for this party.  I’d seen the idea to recreate different Princess dresses on Pinterest, so I tried my hand at Rapunzel.  I made strawberry cupcakes (since pink is one of her colors) and decorated them to look like her dress, complete with mini yellow cupcakes for her hair.  It actually came out a lot better than I expected it to! 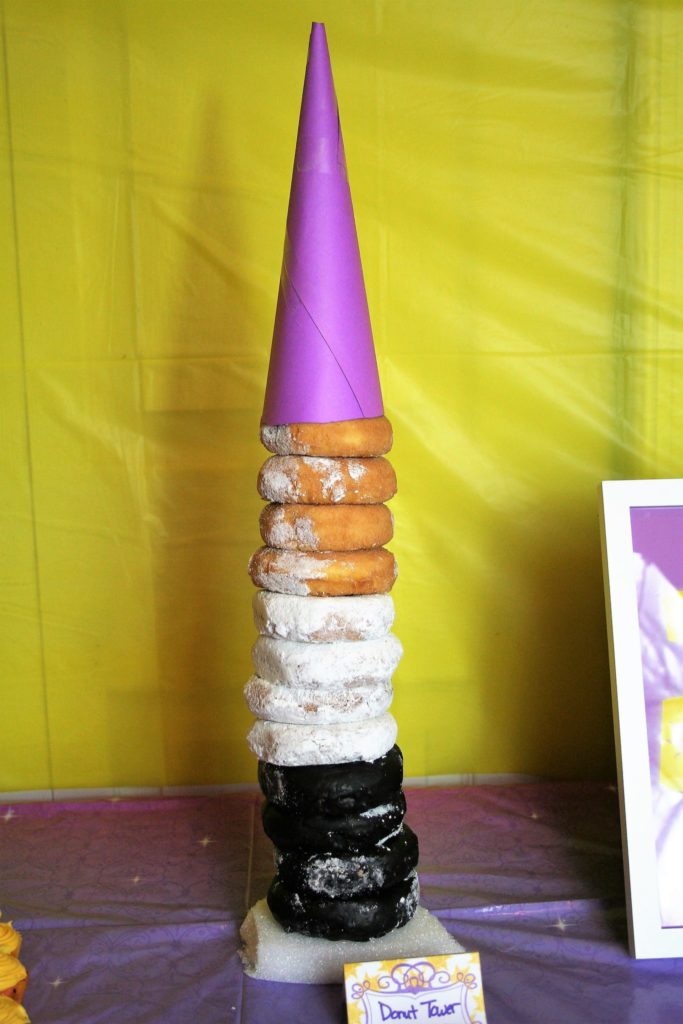 Also on the dessert end I had to get some donuts so I could create a donut tower!  I just bought a box of a dozen assorted to give variety, though it might look better if they were all the same kind.  I stuck a wooden dowel into some styrofoam, lined the donuts up, and then put a purple cone on top!  Easy and fun. 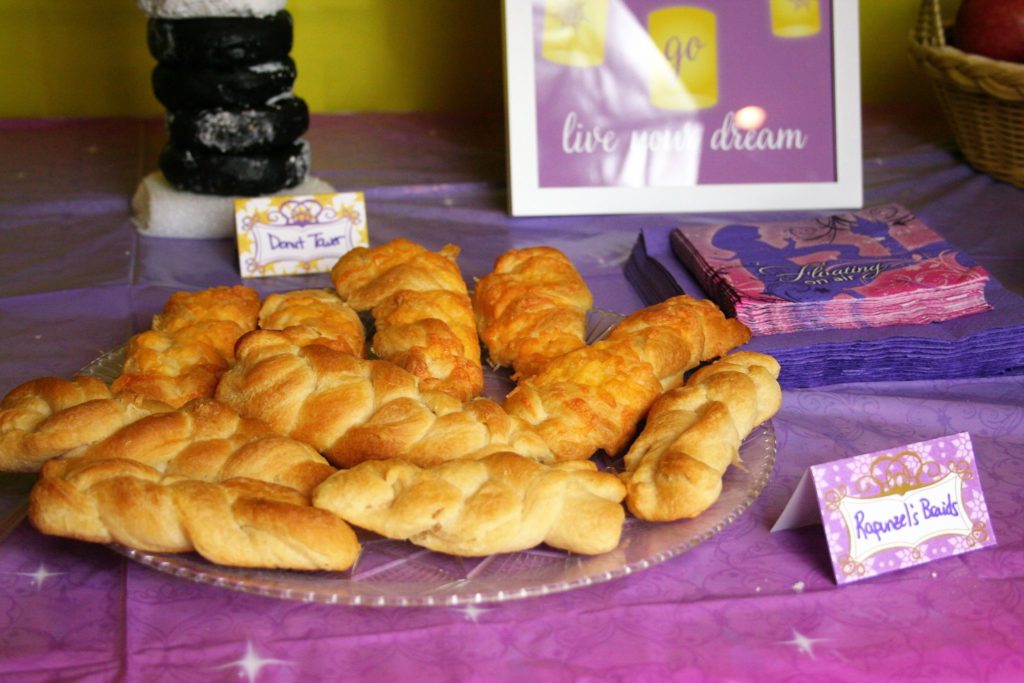 On the more savory end I made some rolls/biscuits.  I just bought typical crescent rolls but braided them instead of rolling them up.  I also sprinkled half of them with cheese and left half of them plain, and then called them “Rapunzel’s Braids”! 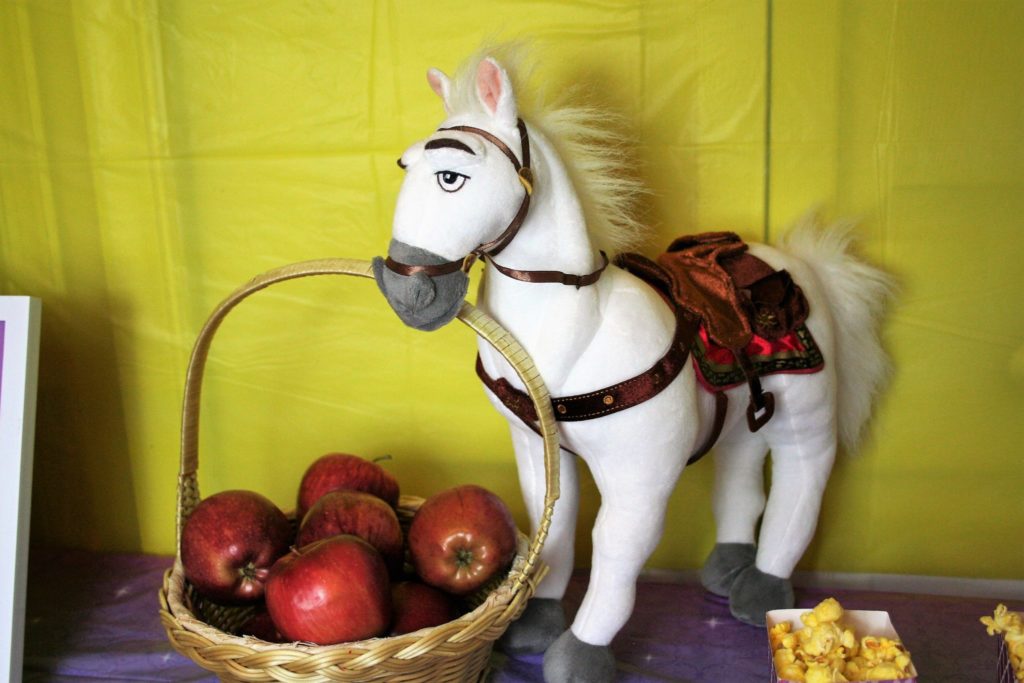 Of course, Maximus would not have been pleased if there hadn’t been some apples for him to munch on, so we had a basket of red delicious apples available too.  Maximus guarded these very closely. 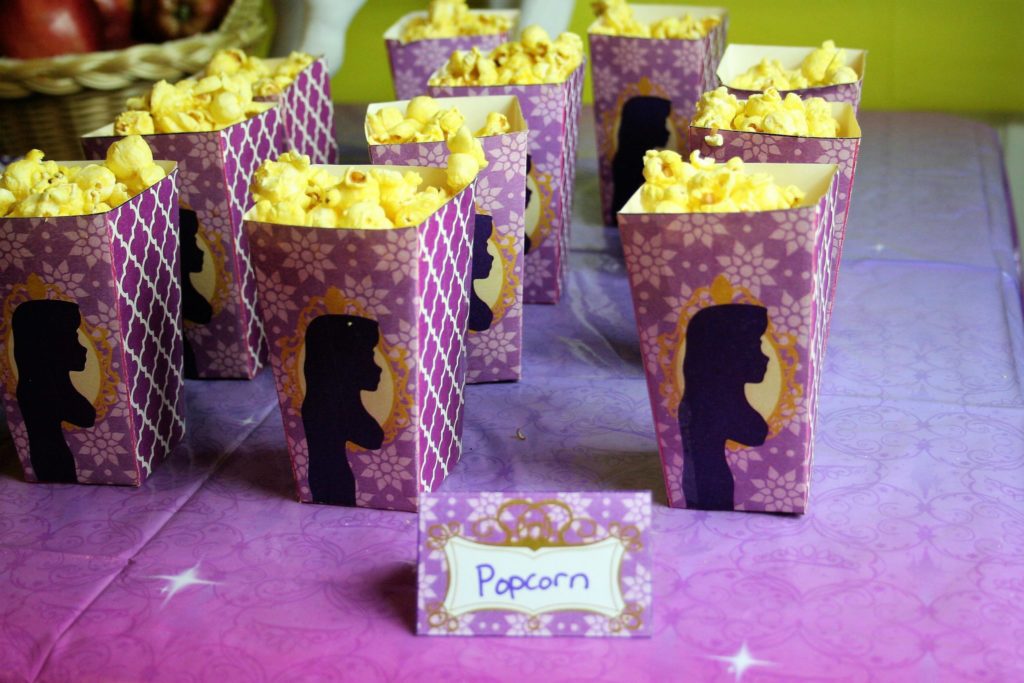 And no movie night is complete without popcorn, so I had plenty of that available too.  These adorable popcorn containers, plus the food tent cards I used, came from Etsy seller Miss Fright’s Delights.  I got the deluxe party pack, which has tons of fun Tangled themed printables you can use.

Some friends brought some snacks too, so we also had Tangled cereal as well as the most delicious bread and cheese. 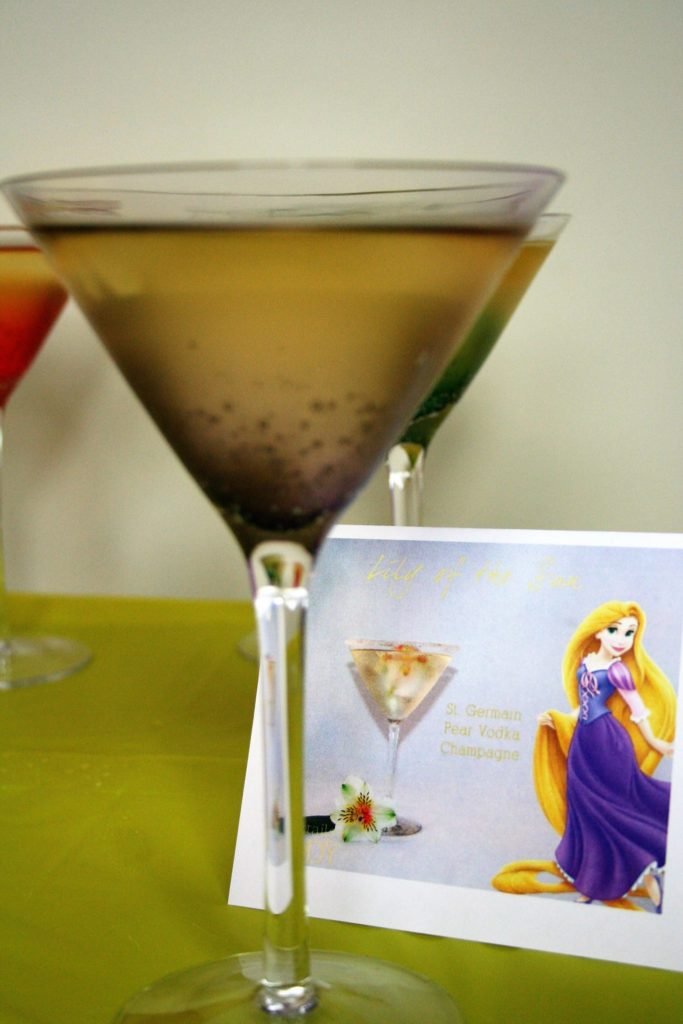 In addition to beer, wine, soda, and water, I decided to do three specialty mixed drinks.  One was from Cocktails by Cody and was called Lily of the Sun.  It was a mix of ingredients I wasn’t all too familiar with and certainly not together (St. Germain, pear vodka, and champagne).  But it was so so good, and different.  And strong – Cody’s cocktails always seem to be on the strong side!  I would definitely make and drink this again.  He has a Mother Gothel inspired drink too but I chose not to make that one because it was also rather floral-based and I wasn’t sure how many people would be into that. 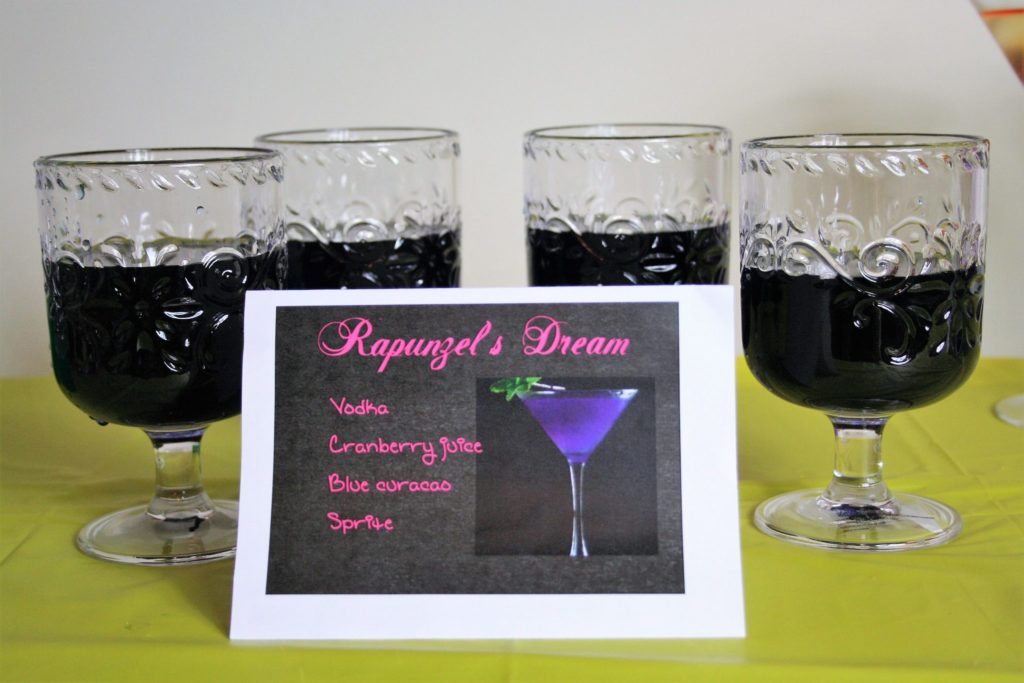 I then made a purple cocktail called Rapunzel’s Dream.  I found a recipe online for a purple drink and used that, but it was STRONG.  3 parts vodka and 1 part everything else… it was so strong I added more sprite when I made a big batch of it, but people still added even more sprite to their cups after.  It was also more purple colored in person (I added some purple food coloring so it wouldn’t look so blue). 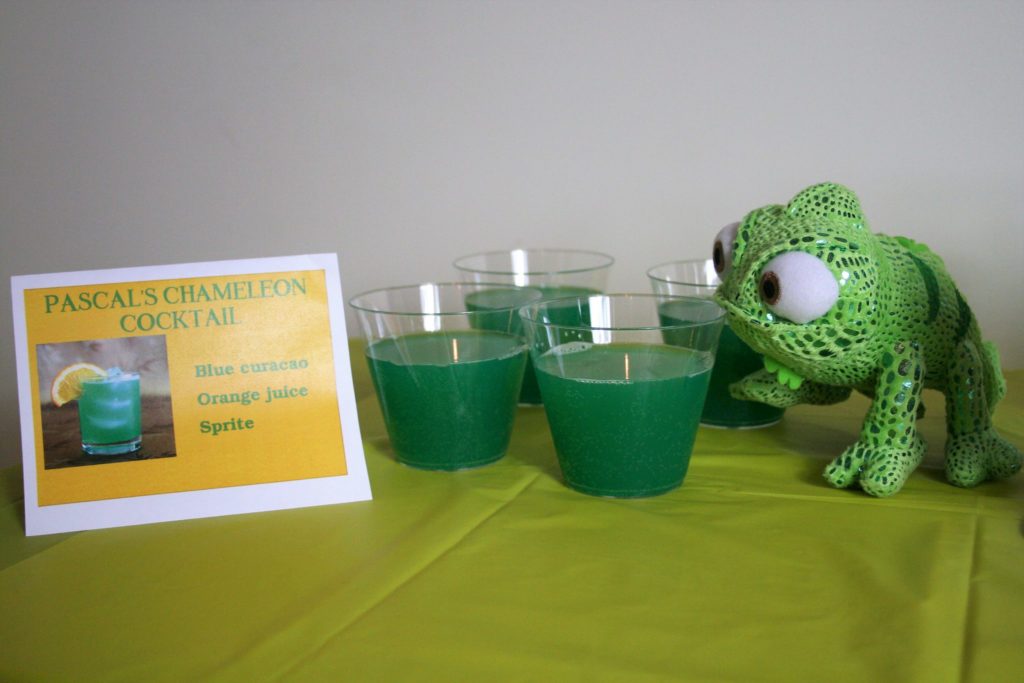 Finally, I wanted to do one lighter, fruitier option which I called Pascal’s Chameleon Cocktail (and in retrospect I wish I’d named in Pascal’s Punch!).  It was a simple mix of blue curacao, orange juice, and sprite.  I also added just a splash of mango vodka, since we just happened to have some.

Of course, the main attraction of the evening was watching Tangled!  We started the movie about an hour after the party started (once most people had arrived) and had fun laughing and singing along.  I even put on the subtitles for some of the songs so it could legitimately be a “sing-along.” 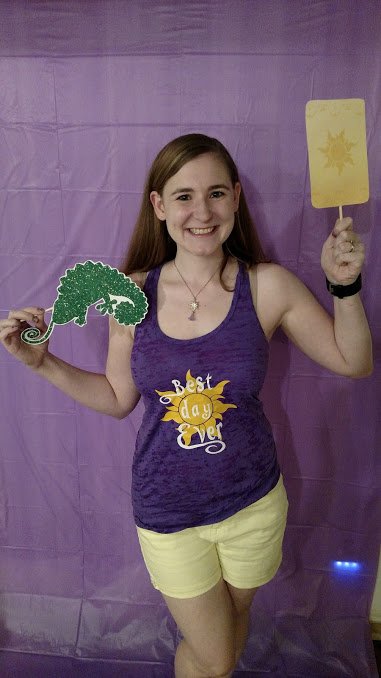 But another fun activity that we had set up was a photo booth, with all Tangled themed props!  I found these printable ones on Etsy from Ira JoJo Boutique.  You download, print, and cut them out and then have lots of fun with photos! I bought a bunch of chopsticks on Amazon for about $3 to tape them to so people could use them easily.  We had a bit too much fun playing with these 😉 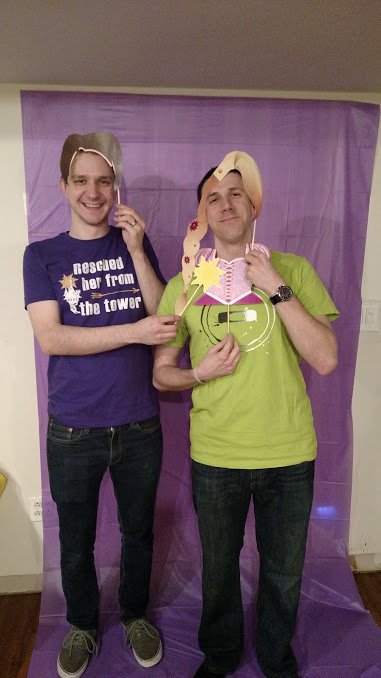 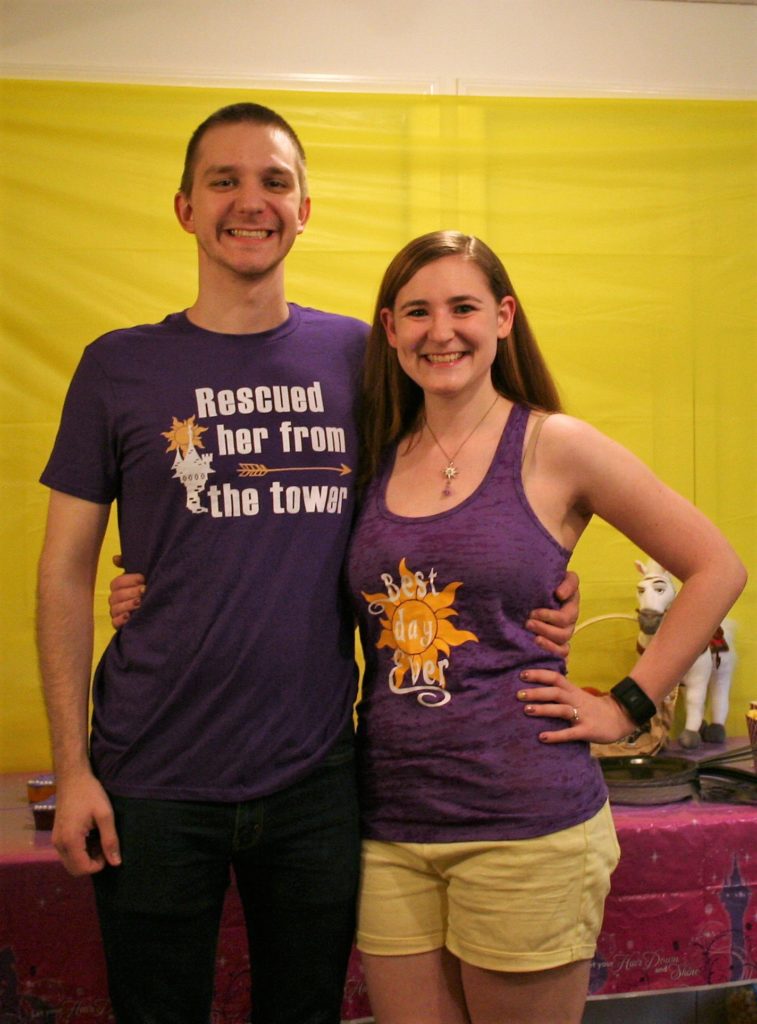 And finally, we had to dress to the theme as well!  Jason and I both had Tangled themed t-shirts on.  His came from Happy Tee Day and said “rescued her from the tower” with an arrow.  Mine was from One Little Spark, Inc., and said “best day ever” with the Tangled sun.  I loved both of these shirts and I think we will definitely have to wear them again for our anniversary trip to Disney World in September! 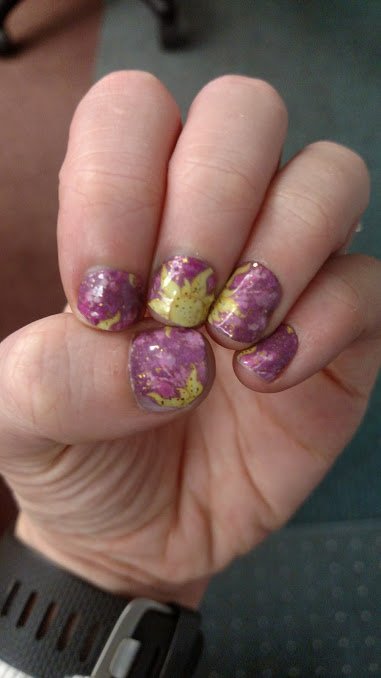 The last little “finishing touch” I did for my birthday look was my nails.  Jamberry recently released some new items in their Disney Collection by Jamberry, including a Rapunzel inspired one called Lost Princess.  I love that it uses the sun symbol but isn’t totally in your face Disney either.  This one is super pretty.

All in all it was a fun night with good food, good drinks, and good friends!  And a pretty great movie if I do say so myself.

What’s your favorite part of this Tangled themed party? What Disney movie would you want to theme a party after?