You are here: Home / Disney World / Stop travel shaming people who are going to Disney 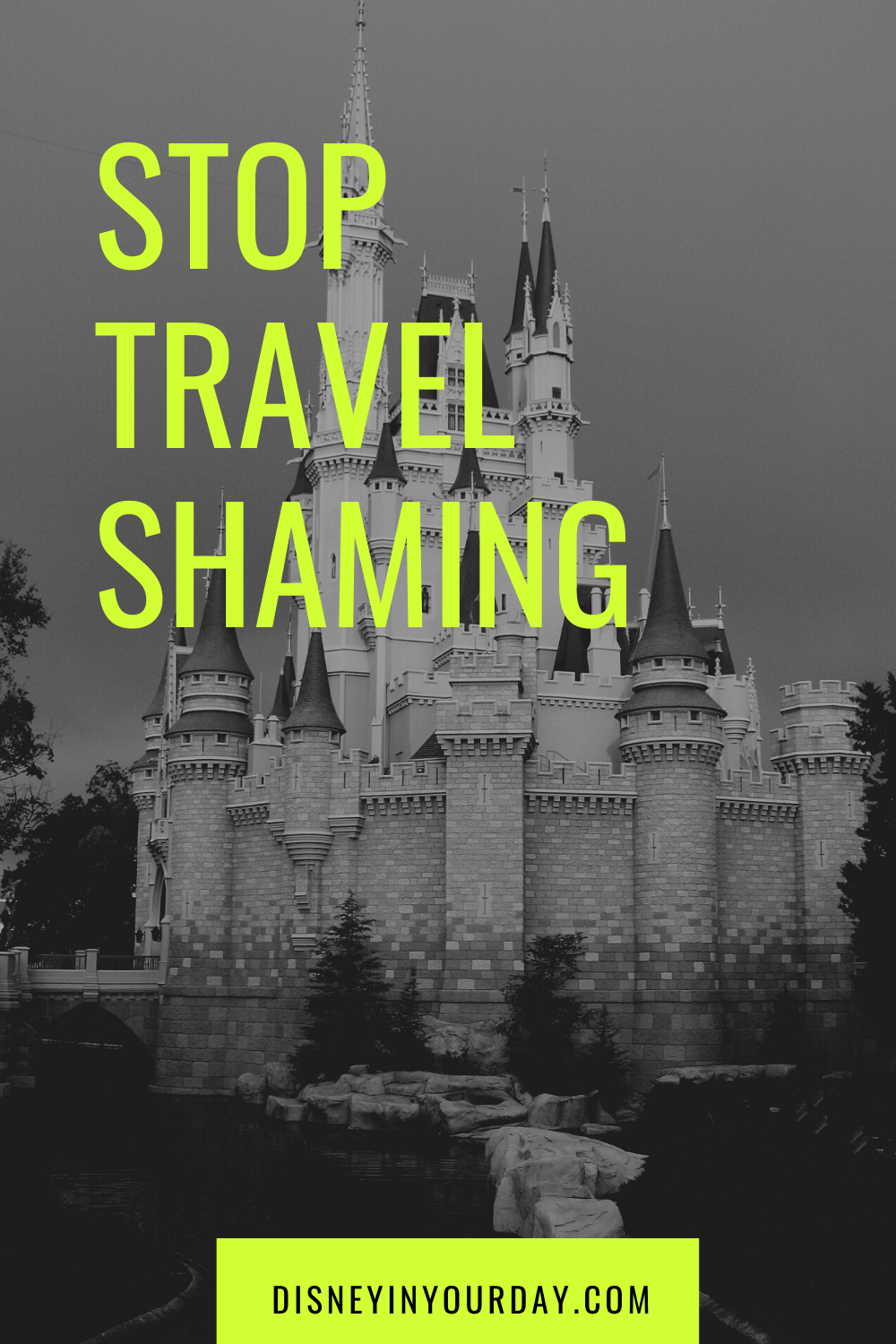 I try not to post anything too “controversial” on my blog, because my main goal is to spread magic and happiness. However, I have seen a lot of hatred within the Disney community and it makes me very sad. I think whether or not you travel to Disney right now is a personal choice and there are safe ways to do it. Those who are travel shaming people who choose to go right now are creating hate. Those who are mocking people choosing to stay at home “due to fear” are also creating hate.

Travel shaming has always existed, but of course it’s gotten out of hand lately. As I wrote in a blog post a few years ago, people will shame for almost any reason – they think you spend too much money, it’s too frivolous, you should “go to different places,” etc. We really need to stop judging each other.

I believe many people, especially those who don’t know Disney well, immediately think of a crowded theme park and it seems like a bad idea. And if you picture Disney World on a normal Disney day, I agree being there would be a bad idea. But that’s not what the theme parks look like right now. Like many businesses, Disney has adapted and changed.

I was judged and shamed recently for running a live, in person half marathon. And I understand that people picture the races that they’re used to – people packed into corrals before the start and tons of people everywhere. But that’s not what half marathons look like anymore (at least not the one I did). They are limiting the number of people, staggering start times, etc. I honestly passed fewer people at the race than I do on a normal day running in my town. I read a lot of blogs and reports from people who are in the parks almost every day, and I believe Disney looks very different from what most people are picturing.

Of course if you are high risk, live with people who are, or just want to be overly cautious it’s totally okay to not travel or think about traveling right now. If the restrictions in place make it not worth it to you, that’s fine as well. But I think we are at the point where the pandemic is not “going away” any time soon, and we need to learn how to keep life going in a way that is as safe as possible. From studies and things I’ve read, the two major things that make it much more unlikely to contract the virus are staying outside and wearing a mask. Both of these things are pretty easy to achieve at Disney.

I am sure many people will judge and shame me just for writing this. They will make their opinions known. I am hoping there are people who might be on the fence about traveling, or thinking about it but scared to do it thanks to other people shaming them. Maybe you’ll relate to this. All I ask is to consider people with an open mind and try not to judge. Please be kind to each other.

Here are a few reasons why I think Disney travel shaming needs to stop:

Disney is taking precautions and enforcing them

Disney has gone above and beyond when it comes to safety. They’ve added social distancing, hand sanitizer, required masks everywhere, and limited the number of people in the parks. Not only have they set up these measures, they are actually enforcing them. I’ve heard many people report that if they took their mask off for even a minute a cast member would ask them to put it back on. Knowing Disney is on top of things would make me feel like I’m in good hands.

You don’t know someone else’s situation

I believe even with Disney’s precautions in place you can do more to keep yourself and others safe – and you don’t know what someone else is doing while they are there. Some people may choose to stick to mostly outdoors activities and dining only in outdoor spaces. Some may drive down instead of flying if they are concerned about the airplane. At the very least, many people are seriously concerned about the pandemic but following the precautions and doing the best they can. Don’t assume that everyone going to Disney doesn’t care about others.

I work in an indoor environment with the public where they often may stay inside for an hour or so. I’m going to be honest – I would feel safer about being outdoors in Disney with everyone wearing masks than I do being at work inside with mostly mask compliance but some “chin wearers” and no one really enforcing it.

Travel, and Disney, are very important to many

This is hard to understand for “non-Disney” people, but in many ways Disney isn’t just something people enjoy, it’s a way of life. Think about one of your biggest passions – maybe it’s an athletic activity, maybe something in the arts like music or singing. If it’s something you are missing due to the pandemic, you probably understand how hard it is. If there was a way for you to still do this activity in a safe way, you’d probably consider it. For example, I know many of my theater friends miss performing. They are jumping at the chance to do outdoor cabarets or performances, or even some indoor shows with social distancing and masks. These things definitely still have risks, but I understand why they want to do it.

Disney is the same for some of us. It’s a passion and brings so much happiness. There are people who think it’s dumb for adults to like Disney because it’s “for kids” or it’s “just a theme park.” These people travel shaming don’t realize it’s so much more than that.

Finally, travel shaming people is pointless because it’s not going to do anything other than create more hatred and more of a divide between others. It’s just going to make people upset, defensive, and angry.

At the end of the day, I feel like if people are calling the pandemic a hoax or purposely going out and having big parties and being in dangerous situations, I can understand some judgement and shaming of that. But MANY of the people traveling right now are concerned people weighing the risks, trying to balance their mental stress with the physical dangers, and taking precautions and respecting safety measures. Please don’t assume that just because people are traveling, they are doing so in a dangerous way.

If you want to go to Disney and follow the safety procedures, great! If you want to stay home or wait until next year to travel there again, also great! Disney fans, please know I respect you no matter what you decide to do. The only time I won’t respect you is when you are being hateful to others.