Dessert parties have become a pretty big thing at Disney these days. And why not? Desserts, drinks, and fireworks… sounds pretty great! They do come with a price tag, but if you’re looking for something special to do it’s a fun opportunity. When I traveled to Disney this past trip with a friend of mine who is a huge Star Wars fan, I decided it was probably time to try the Star Wars: A Galactic Spectacular dessert party again.

I had attended the Star Wars dessert party about three years ago, but it seemed like a lot had changed since then – that one was outside, didn’t have characters, and the fireworks show was totally different. I also went to the Frozen dessert party a year ago and loved that one, so I was excited to see what Star Wars had to offer!

This event is held select nights in Hollywood Studios and cost $79 per person.  It included food (both desserts and some savory options), a bar with specialty Star Wars themed cocktails, reserved seating for the fireworks show, and a take-home Darth Vader stein. 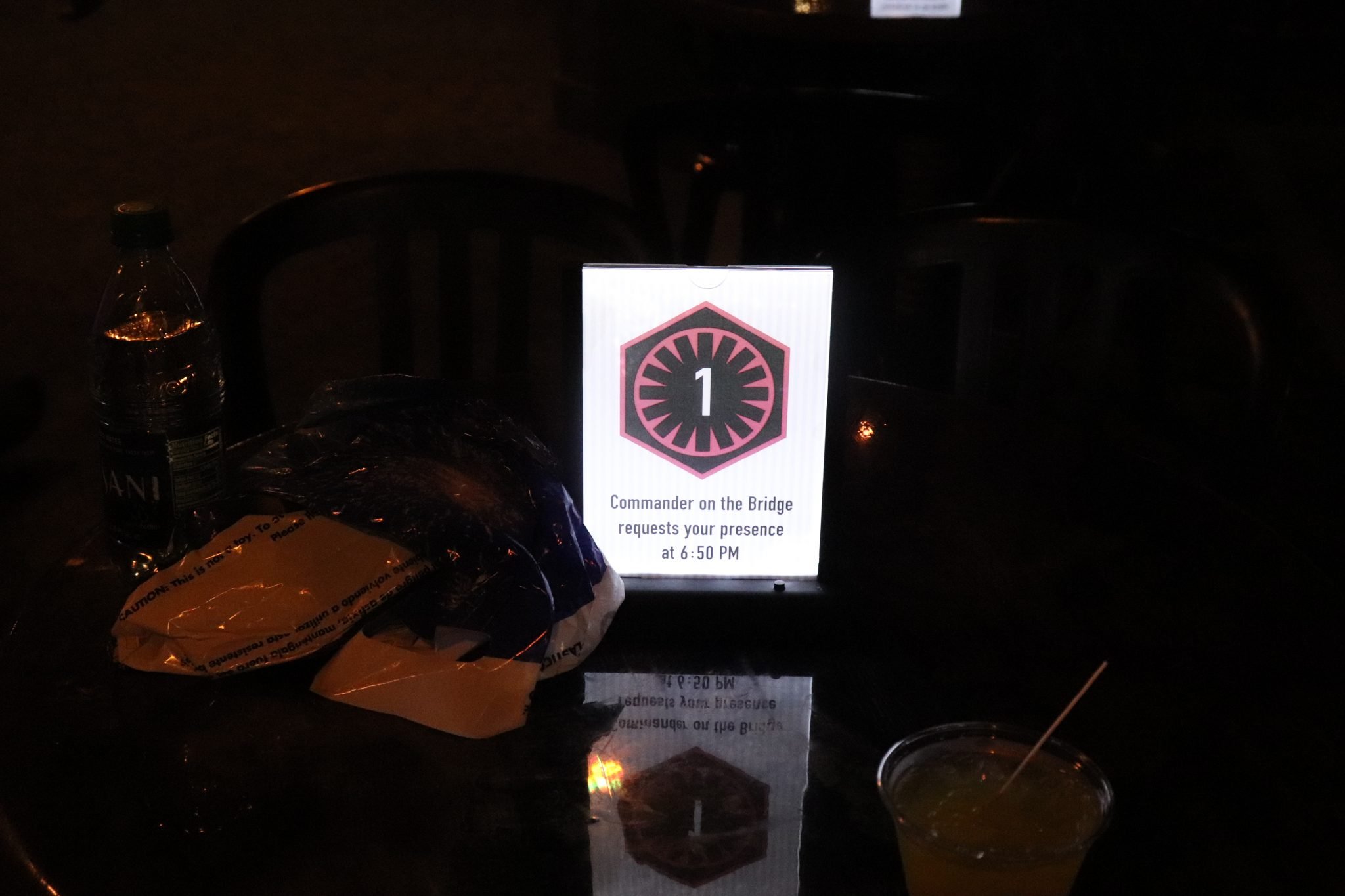 We were told to report to the Launch Bay and they let us in around 6:45 (the event officially started at 7pm, with the fireworks at 8:30pm). The thing that was a little bit odd was that the Launch Bay was still open to the general public until closing at 8:30, so while we had a reserved seating area everything else had other people who weren’t part of the dessert party. We could still go walk through and look at all of the props and exhibits which are usually there. This was nice because my friend hadn’t actually been inside the Launch Bay before and was very excited about it. 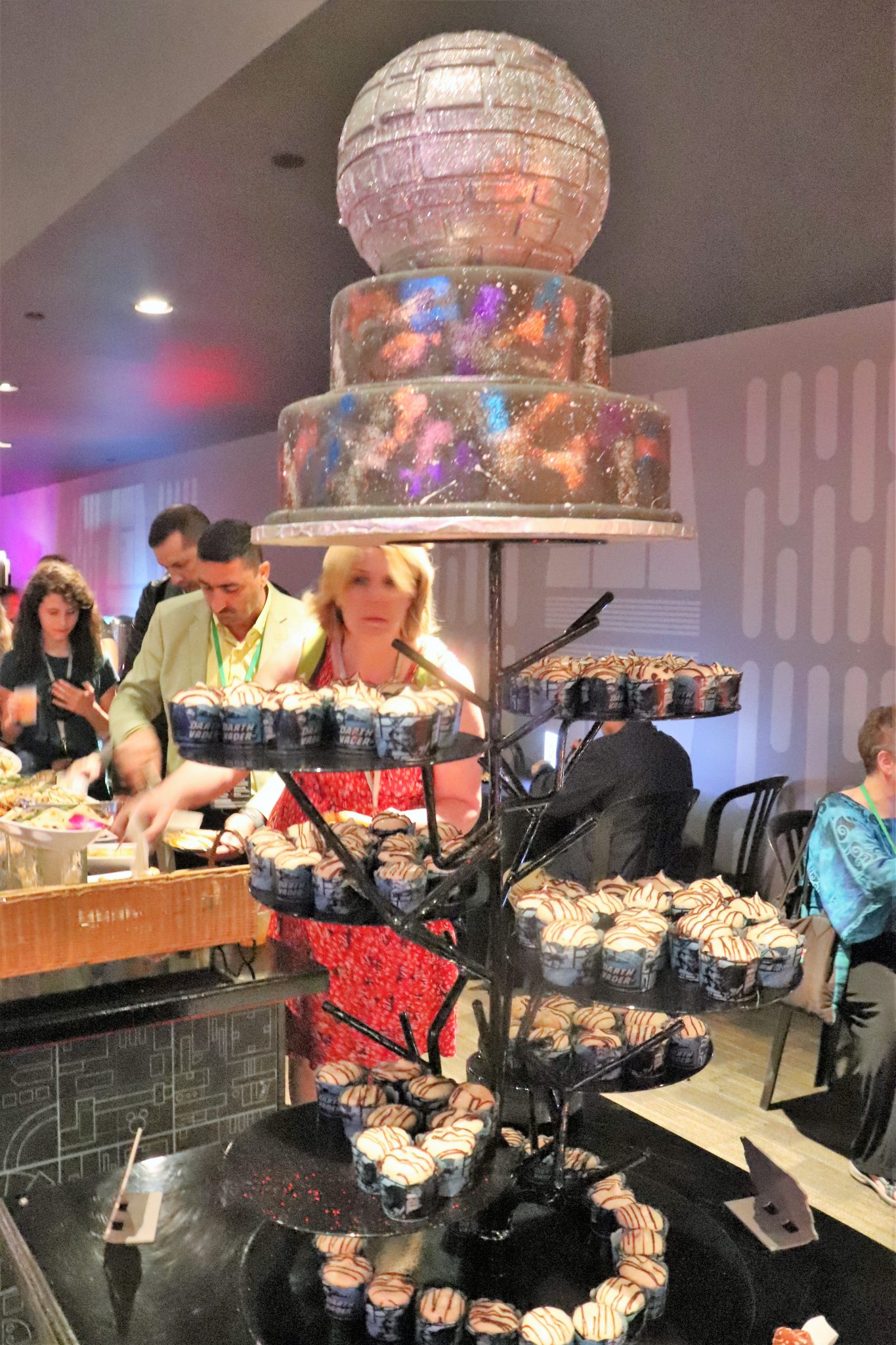 Of course the focus here is on the desserts – and there are a lot of tasty options! There are several cupcakes, including a chocolate and peanut butter “Darth Vader” one, a marble cupcake, and a lemon cupcake with blueberry meringue in a BB-8 wrapper. Then there is the blue milk panna cotta – you have to have some blue milk! You also have a number of different fruit filled mousse domes and a chocolate one.  Finally in the “mini dessert section” you had some assorted cheesecake bites. 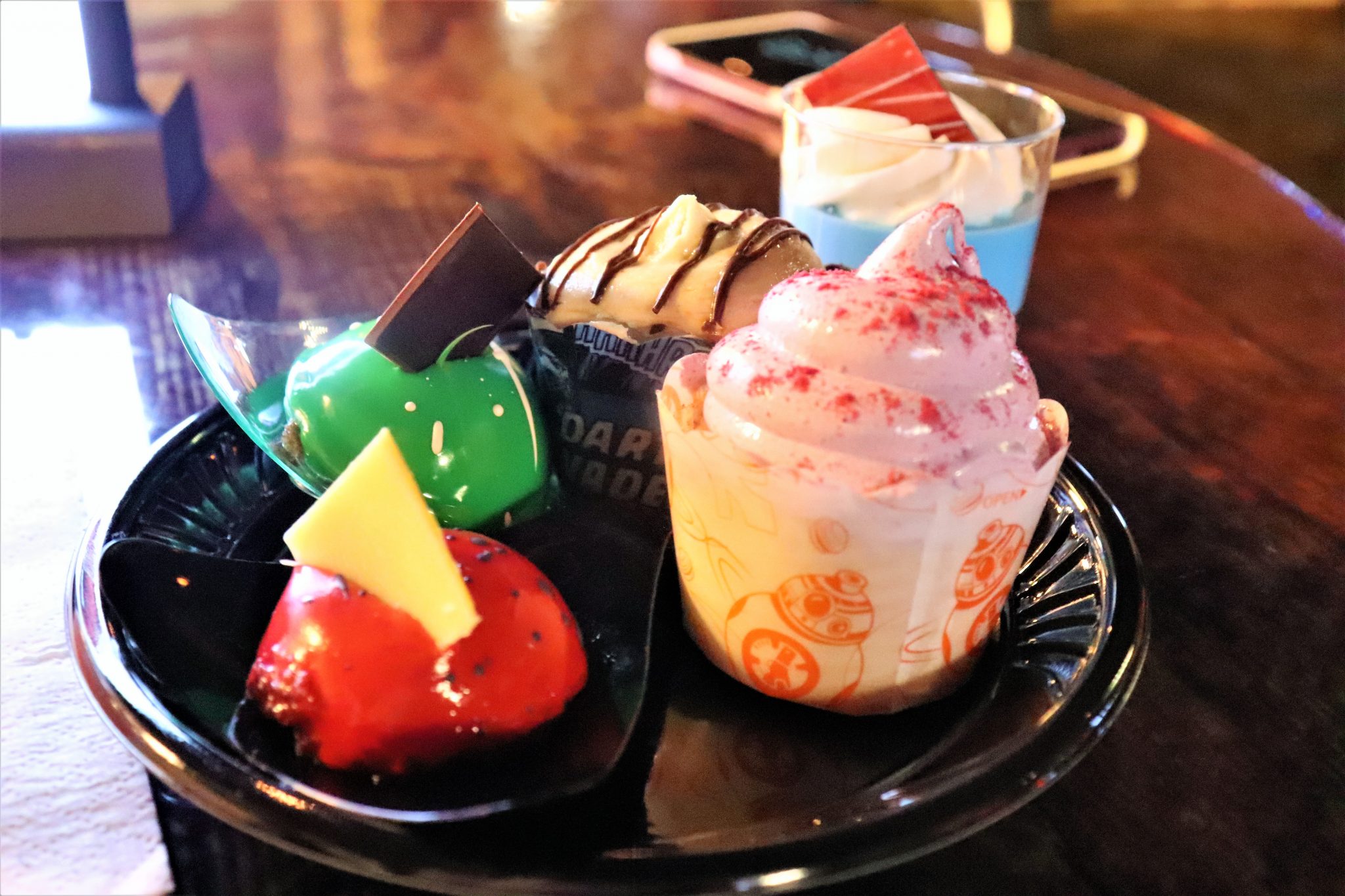 Then there are two other dessert tables with a little more work involved for some special treats. The first was a freeze dried chocolate nutella truffle, which could be topped with chocolate and/or raspberry sauce.  The Second was a table with bread pudding, cookies, and vanilla ice cream.

But for those who aren’t as keen on the sweet stuff, there’s a nice variety of savory options as well.  They had flatbreads that could be accompanied by several different meats and cheeses, pickled vegetables, hummus, and a black bean dip. My friend isn’t a huge fan of dessert so he partook in a lot of this. It was very good and I liked having both options. 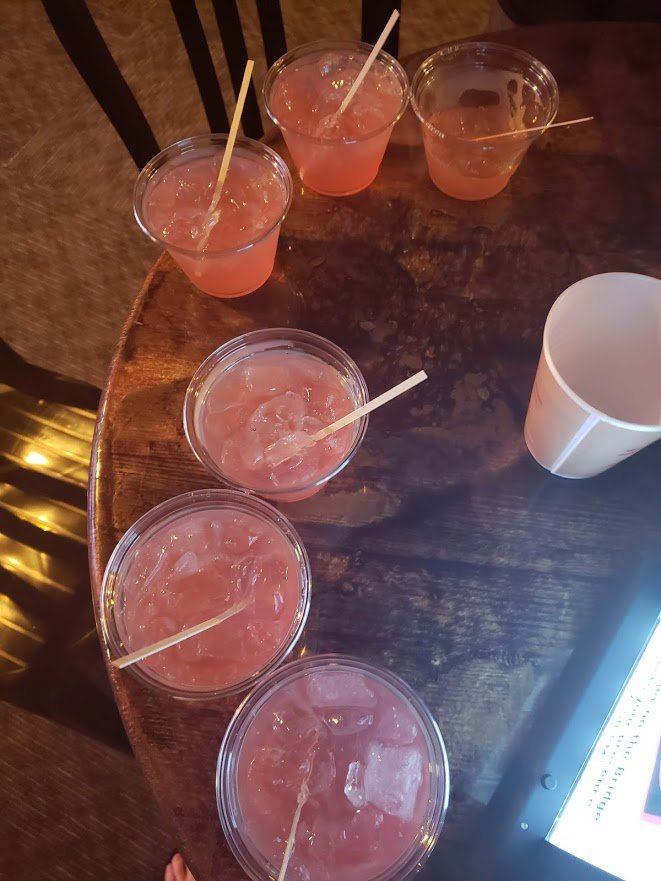 Getting our money’s worth…

For me, one of the biggest perks of these types of dessert parties is the open bar. You don’t have a ton of time (a little over an hour), but you can get as many drinks as you want during that time. There are also plenty of non-alcoholic options, such as soda, water, juice, coffee, and tea.

You can get a few different kinds of beer and wine, but the real fun is in the mixed specialty drinks. They had three different ones while we were there: Galactic Punch (rum based with mango syrup and passion fruit juice), Cosmic Citrus Twist (vodka based with water melon lemonade), Light Speed Margarita (tequila, blood orange, sour mix and lime juice). I tried all three. The Galactic punch was sweet and not overly strong. The margarita was definitely our favorite – we tried to get our money’s worth here! 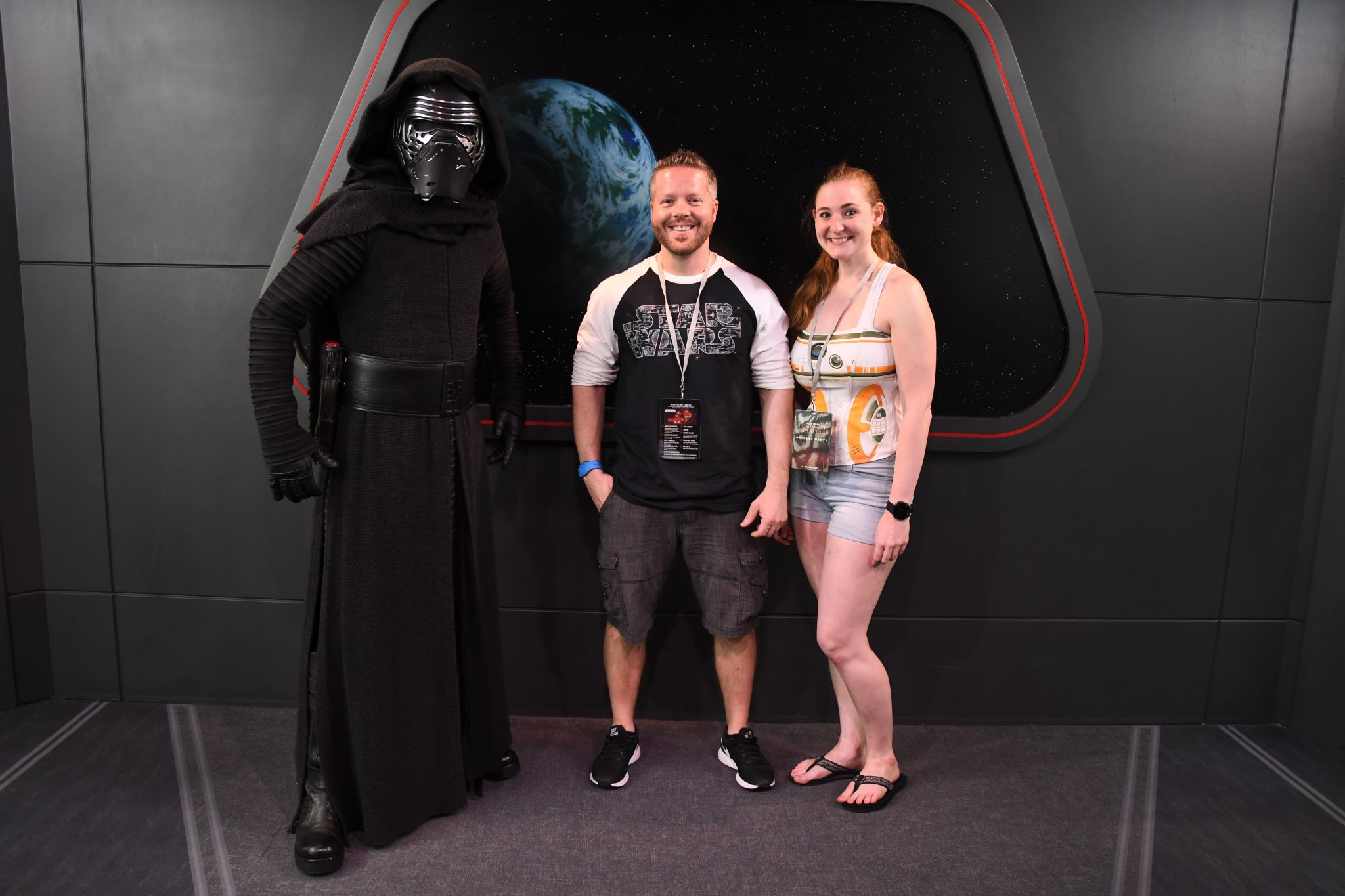 They advertise the “possibility” of being able to meet Kylo Ren, Chewbacca, and BB-8 during the dessert party. What that actually means is that since the Launch Bay is open, you can wait on the line to meet them like everyone else if you want to. You do get a priority meeting time with Kylo Ren, but he had no wait at that point anyway. We waited maybe 10 minutes to meet BB-8 as well (I was wearing my BB-8 shirt so I had to!), but it felt kind of like it was wasting valuable party time. If I had realized that I would have gone to the Launch Bay earlier in the day to do the meet and greets, before the party actually started. 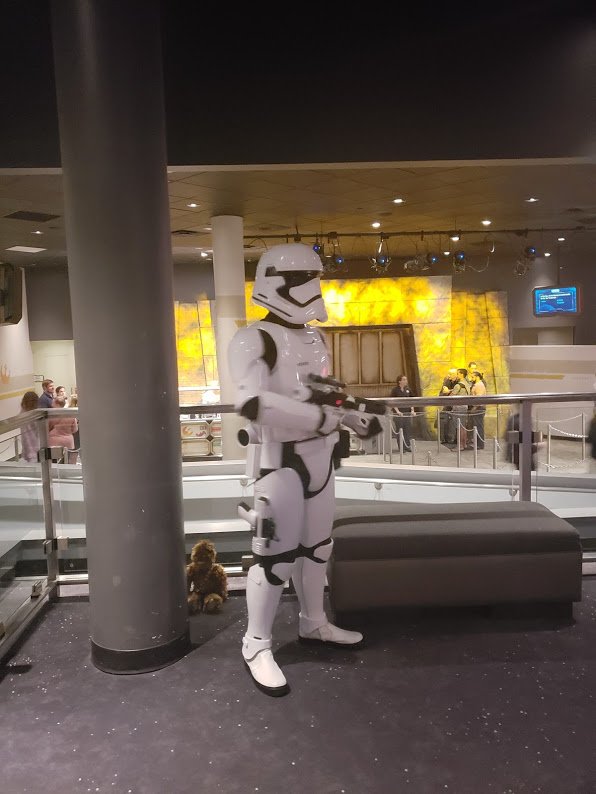 Two stormtroopers were present throughout the entire party, walking around and interacting with guests. They were absolutely the highlight of the event and had everyone laughing. They have certain phrases they can use to interact with people and they stay in character so well. They did not like me at all because of my BB-8 shirt. One came up to me and said I looked like a resistance supporter and asked me for ID. He would not leave until I got out my license and handed it to him!

Another person at the party had a plush Chewbacca doll. One of the stormtroopers confiscated it and put Chewbacca in the corner like he was a prisoner, and then stayed and stood guard over him! (Take a look at little Chewbacca sitting there in the photo above). We had a lot of laughs at stuff like this. 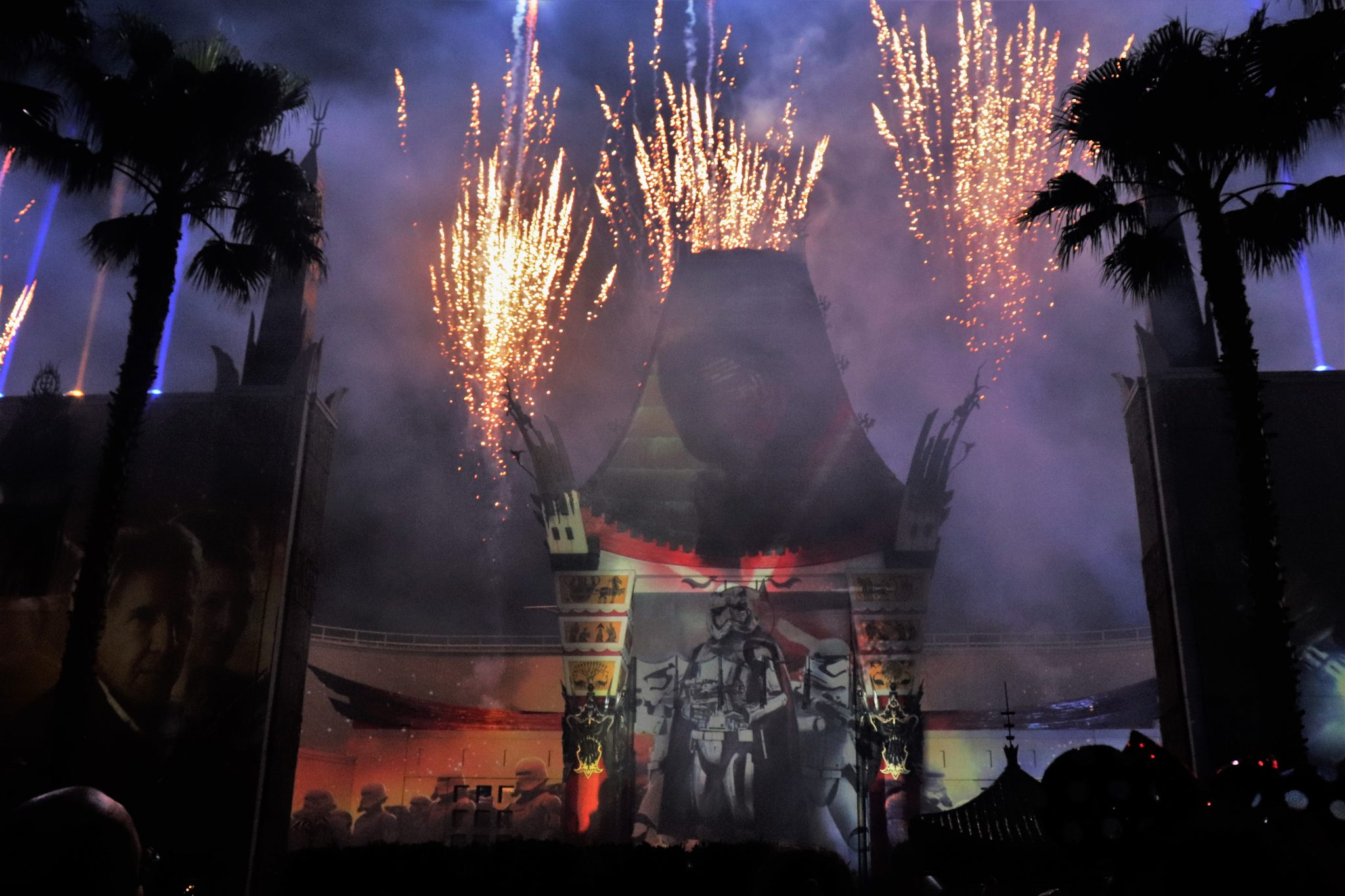 Finally a little before 8:00 they took us outside for the fireworks viewing. We were led to a spot right in front of the Chinese theater. It was nice because we were in a closed off area and everyone could sit down (once the group yelled at a few men who were standing up front and refusing to get out of the way or sit down).  We saw the preshow (Disney Movie Magic) and then the fireworks/show.

This was my first time seeing this version of the Star Wars fireworks. I actually think our reserved spot was a little bit too close – so much of the show is projections that span the length of the theater, so we found ourselves turning our heads a lot.  It’s a lot of projections than fireworks, but it was well put together and we really had a great time watching it. 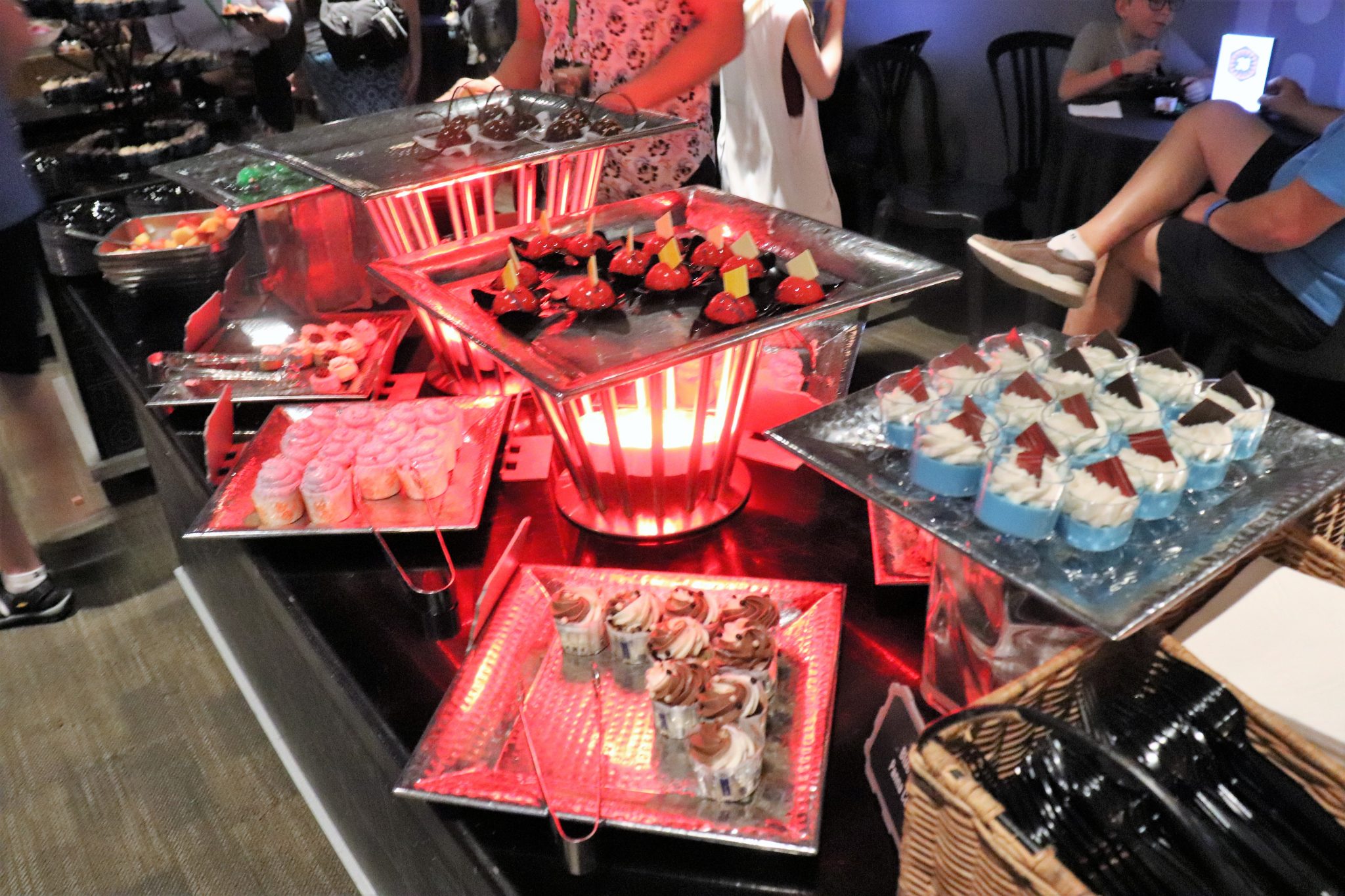 I know the question a lot of people like to ask is, “Is it worth it?”  And I will admit that $79 is a somewhat high price point.  But given what Disney is charging for other things, I did feel like personally for me, this was worth it.  If you’re going to drink alcohol I’d say it’s almost definitely worth it (let’s just say that if Disney normally charged $10 for a mixed drink I almost got the value for my ticket in the drinks alone).  There was a large food selection and I was stuffed by the end (and I didn’t even eat dinner beforehand to prepare!).  The reserved viewing area is nice. And you also get the Darth Vader mug, so there’s a souvenir involved too.  I think if you’re looking to do something special and you or your family is a big fan of Star Wars, this is a worthwhile experience!

Would you be interested in doing the Star Wars: A Galactic Spectacular dessert party?