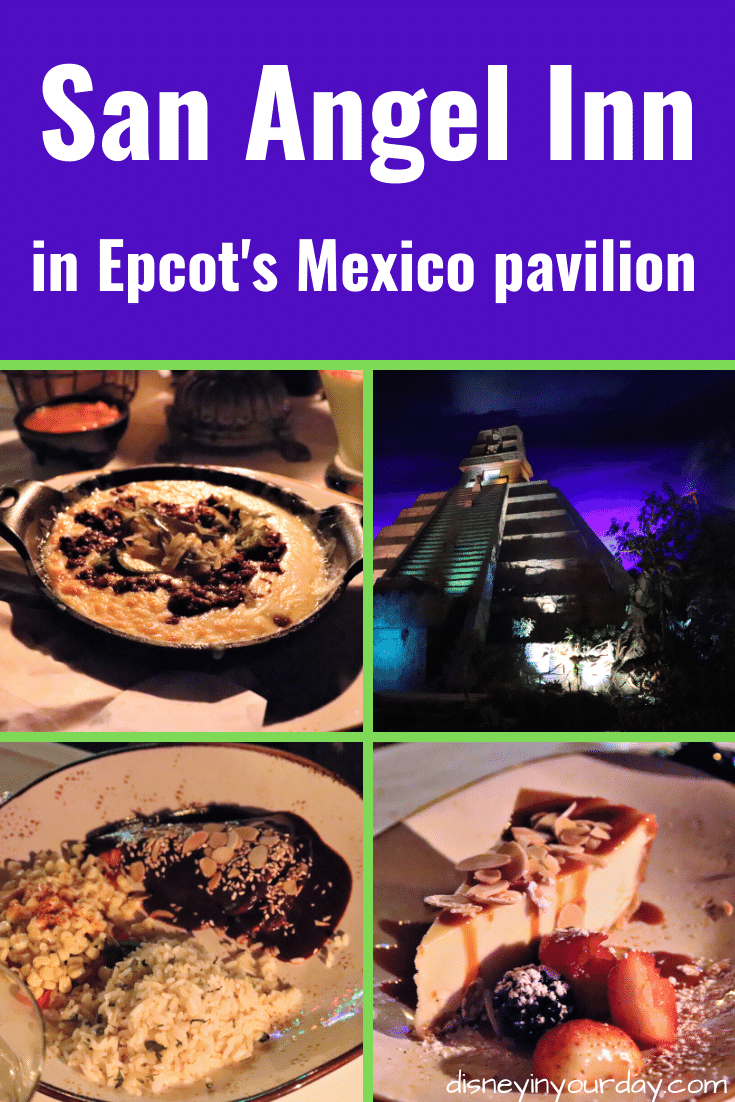 San Angel Inn is one of the two table service Mexican restaurants in Epcot. It holds a special place in my heart because the couple of times I’ve been to Disney World with my parents, we always eat here. My dad loves Mexican food so it’s no surprise that we pick this one! I remember it from my very first trip to Disney in 1998, and this past year when we were back at Disney with my parents of course we had to have a meal at San Angel Inn.

This is the restaurant in the Mexico pavilion that is inside of the pyramid – part of the boat ride, Gran Fiesta Tour, goes right past some of the tables. It has dim lighting to help create the ambiance, though this also means that it’s almost impossible to get good photos without lugging in photography lighting. I did my best but I apologize that the pictures aren’t the quality they normally are. 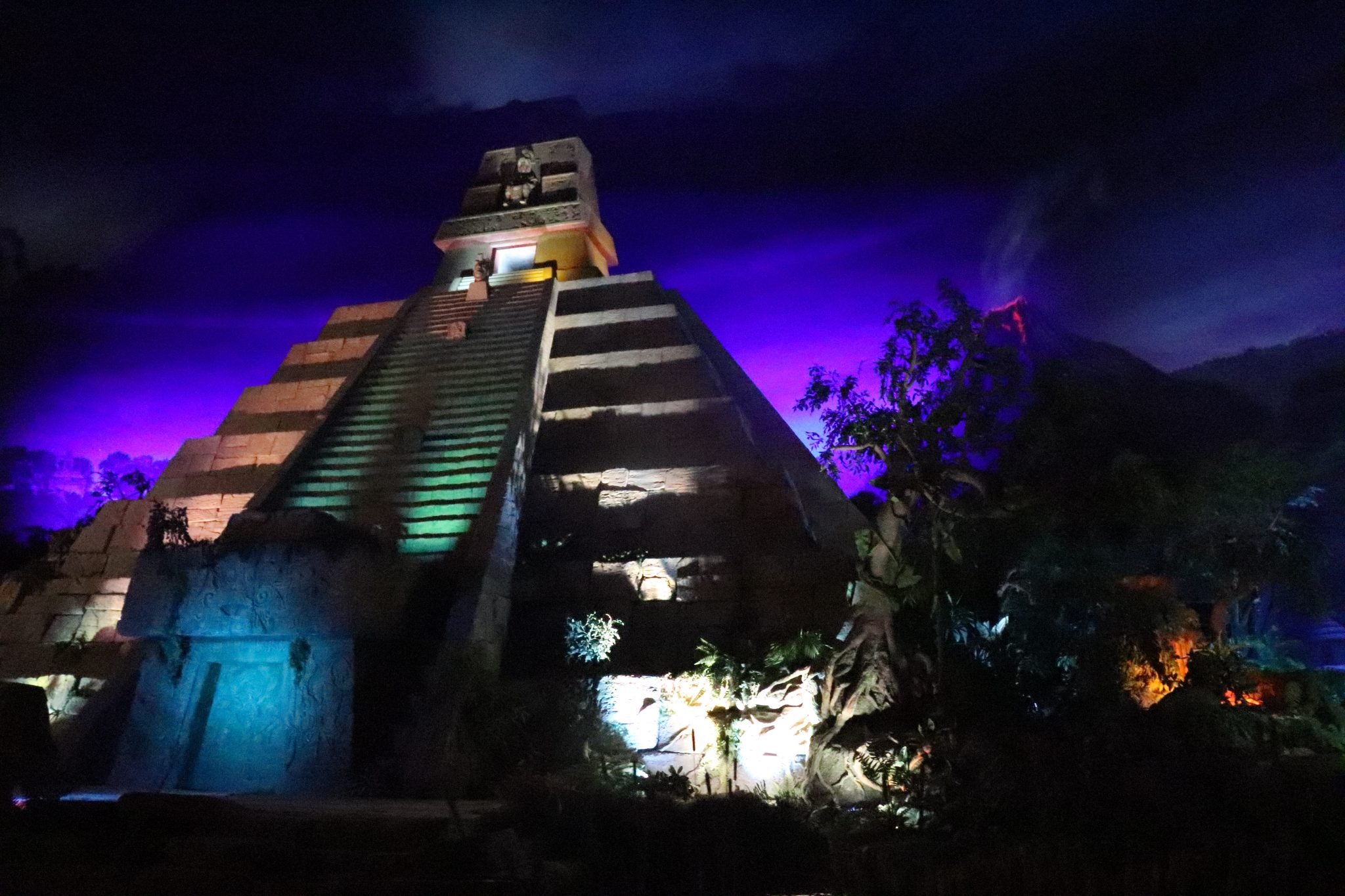 We were here in December and booked it as part of the Candlelight Processional Dining package. That meant we paid one price per person which included a 3 course meal and reserved seating for Candlelight Processional (a holiday show at Epcot – this year we saw it hosted by Neil Patrick Harris!). It turns out that 3 courses at San Angel Inn is A LOT of food.

Alcoholic beverages were not included with the dining package, but we were able to purchase some if we wanted to. I went with the La Cava Avocado margarita (Tromba blanco tequila, melon liqueur, fresh avocado and lime juice. Served frozen with hibiscus salt rim): 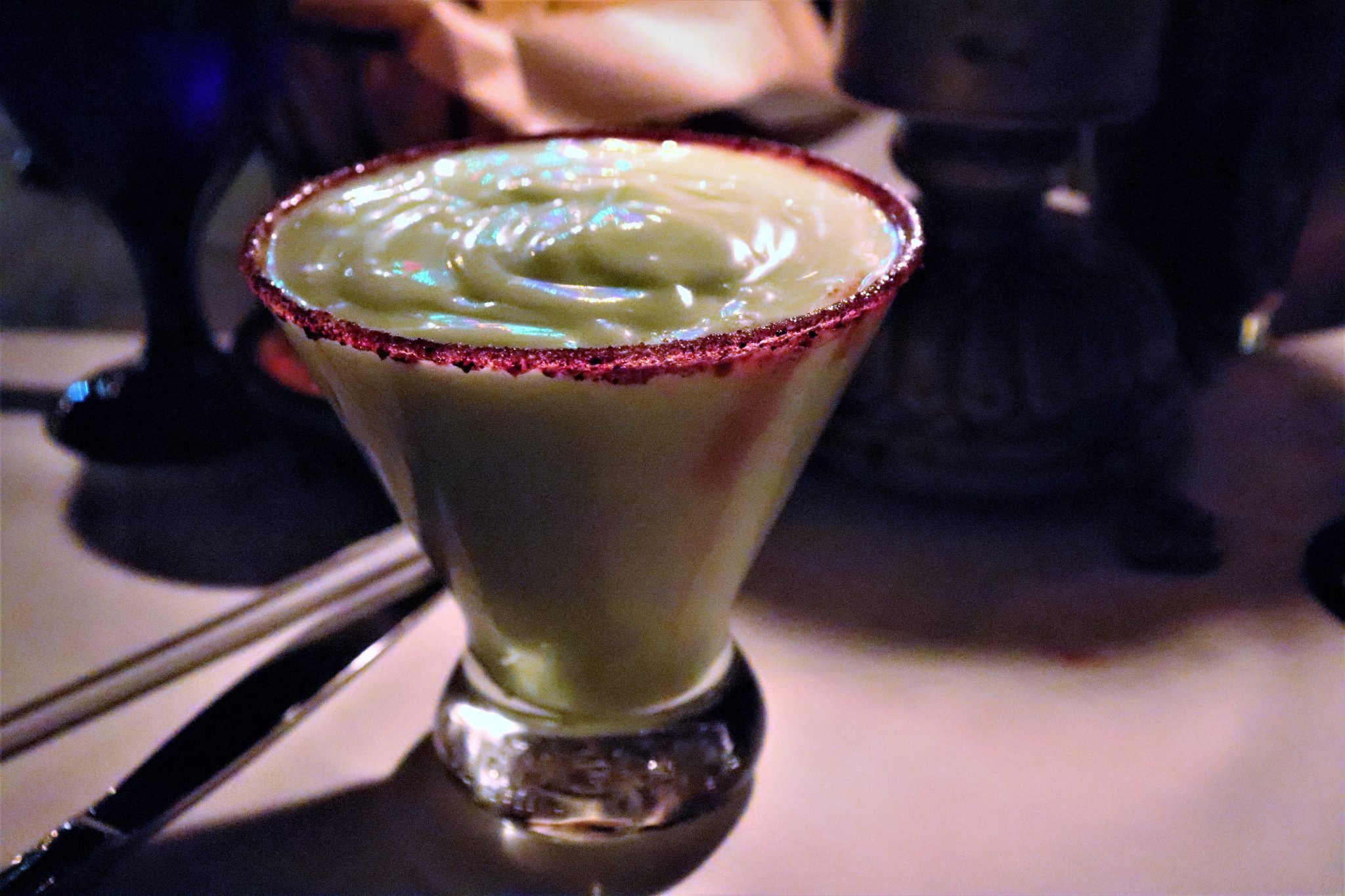 I had heard a lot of good things about this margarita, but it was even better than I had hoped! It’s got a great flavor with the combination of melon and avocado. I liked it so much I made my own version at home!

My dad got a classic margarita, which it seems I didn’t grab a picture of. He definitely enjoyed it. My mom went with the Mexican sangria (Made with red wine, Tequila, orange liquor, agave néctar and fruit juices): 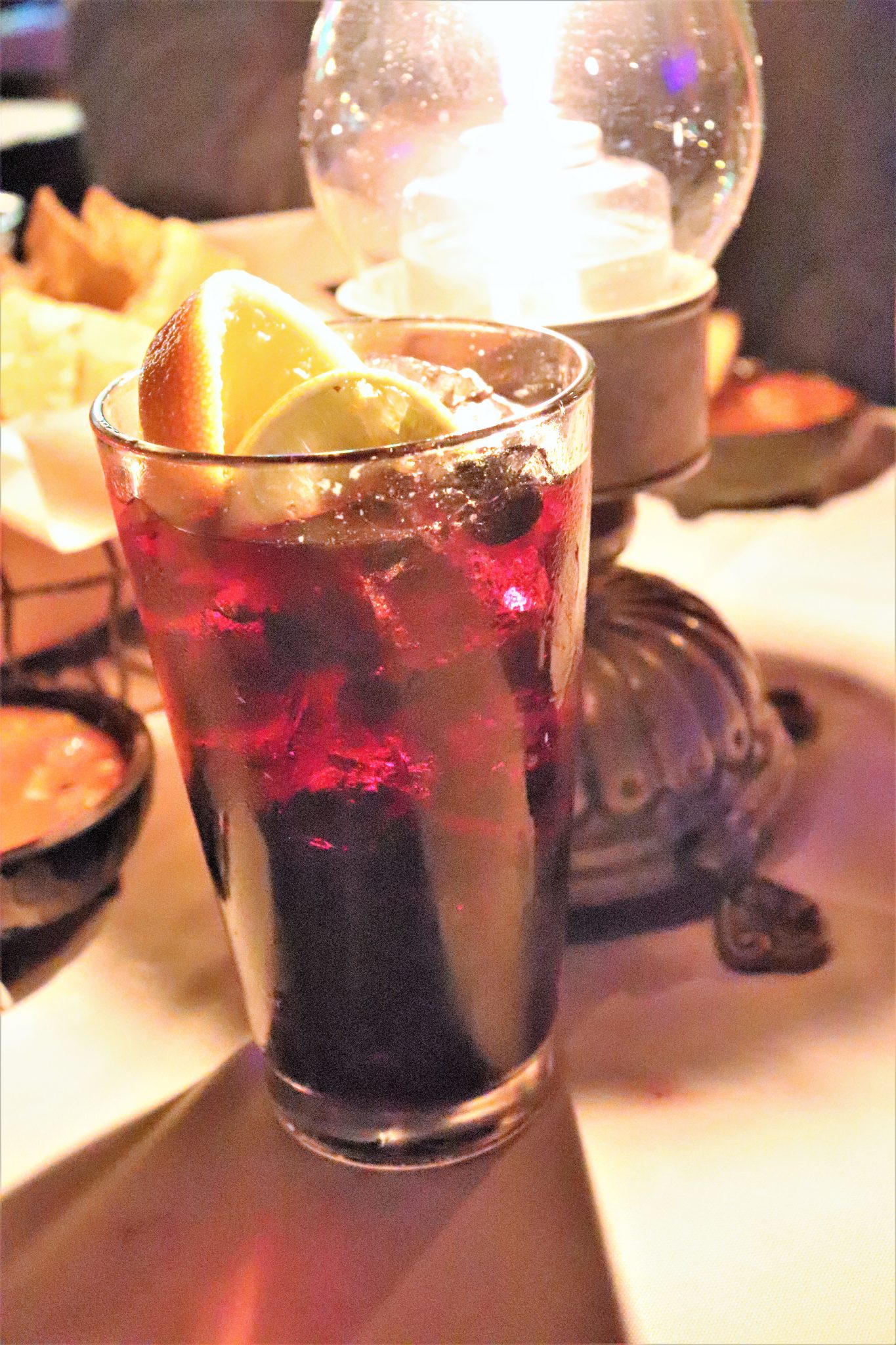 This was nice – I had a sip and it was definitely one of the better sangrias I’ve had (and certainly better than most of the sangria you can get at Disney World at counter service or snack carts).

Everyone was able to get an appetizer, so we tried to make a few different choices so we could share. Two of us went with the Queso Fundido (Melted Monterey Jack Cheese topped with Chorizo, Poblano Peppers and Onions served with Flour Tortillas):

This is such a great queso. It’s another one that I’ve recreated the recipe so I can make it at home, because it’s just so good. I think it’s the real, delicious cheese that they use and the chorizo. It all has so much flavor.

My mom got the Guacamole (Topped with Mango and Toasted Pumpkin Seeds served with Chicharrónes and Salsa Valentina): 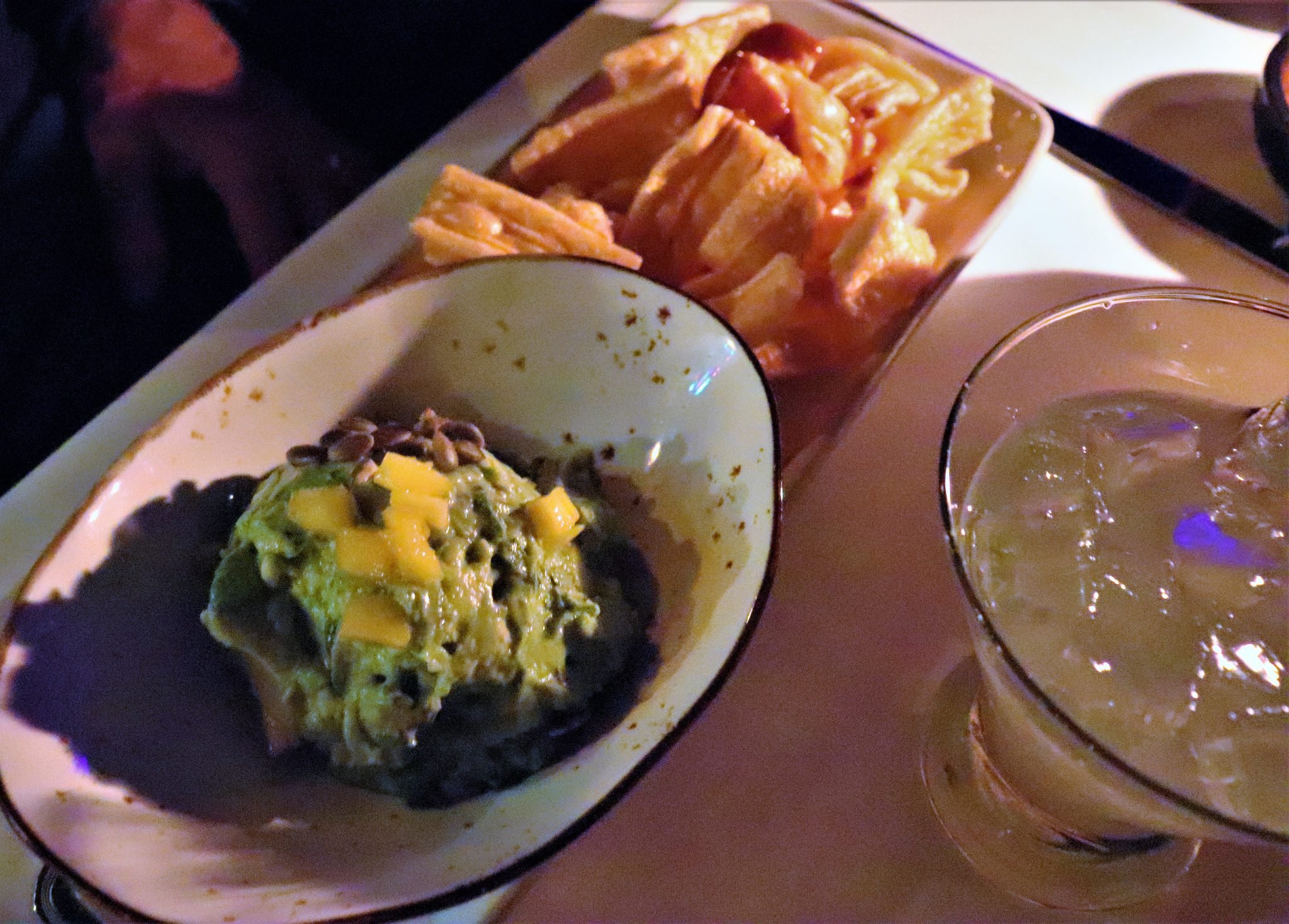 The mango and pumpkin seeds make this a little more unique than a typical guacamole, and I personally enjoyed that (and hey! That classic margarita did sneak into a photo after all!). I wasn’t crazy about the Chicharrónes being served with it just because it felt like a bit too much going on. I would have preferred classic tortilla chips. 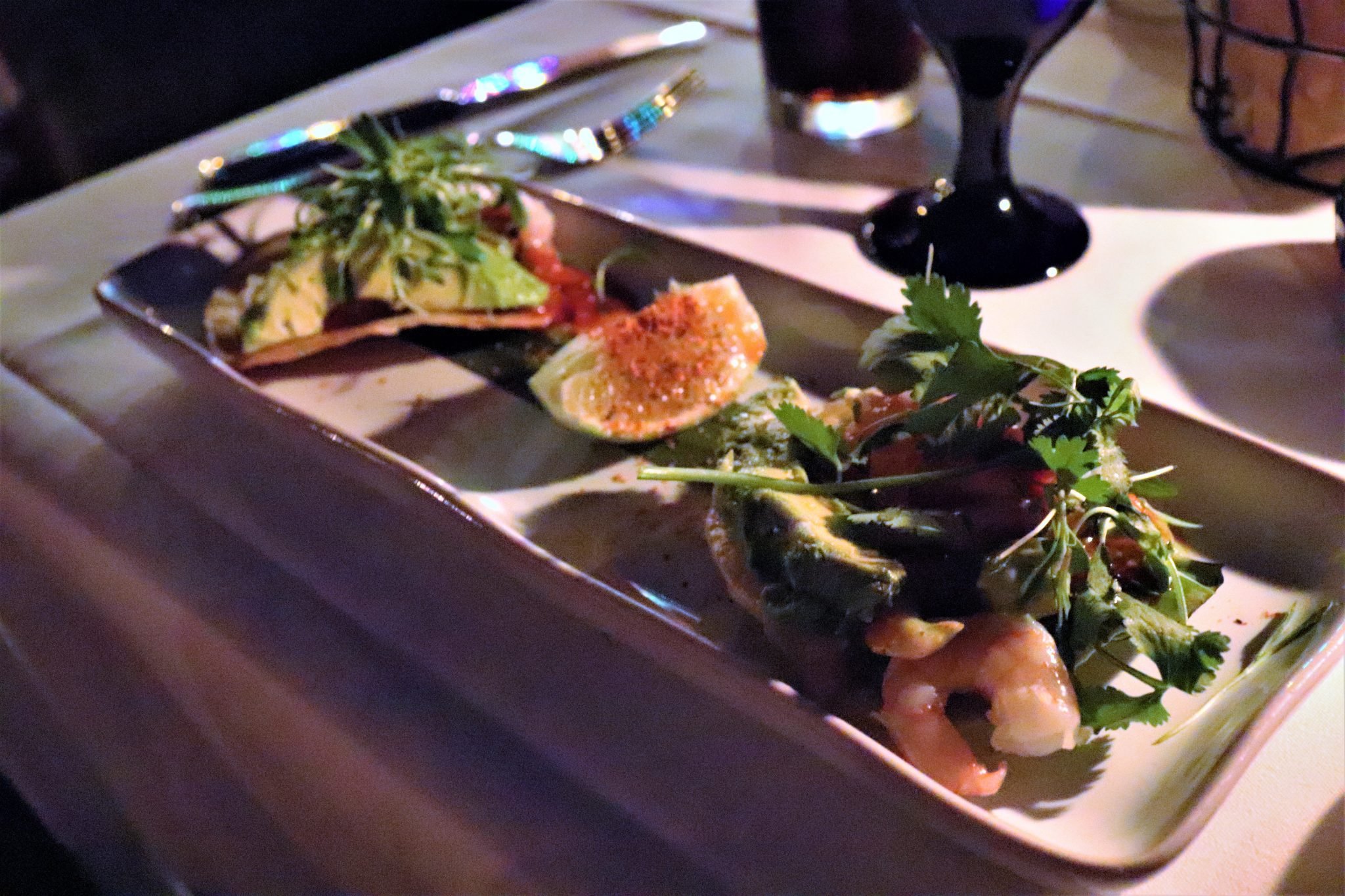 These were some great tostadas. I personally feel like you can’t go wrong with shrimp and avocado. I think the appetizers we had were probably the strongest part of the meal, and I would definitely come back here to eat and just get a bunch of apps and some margaritas and call that lunch or dinner.

For his entree, my dad had the Mole Poblano (Crispy Half Chicken topped with a Classic Mole Sauce, made with Nuts, Spices, and a hint of Chocolate; served with Cilantro Rice and Corn Tortillas): 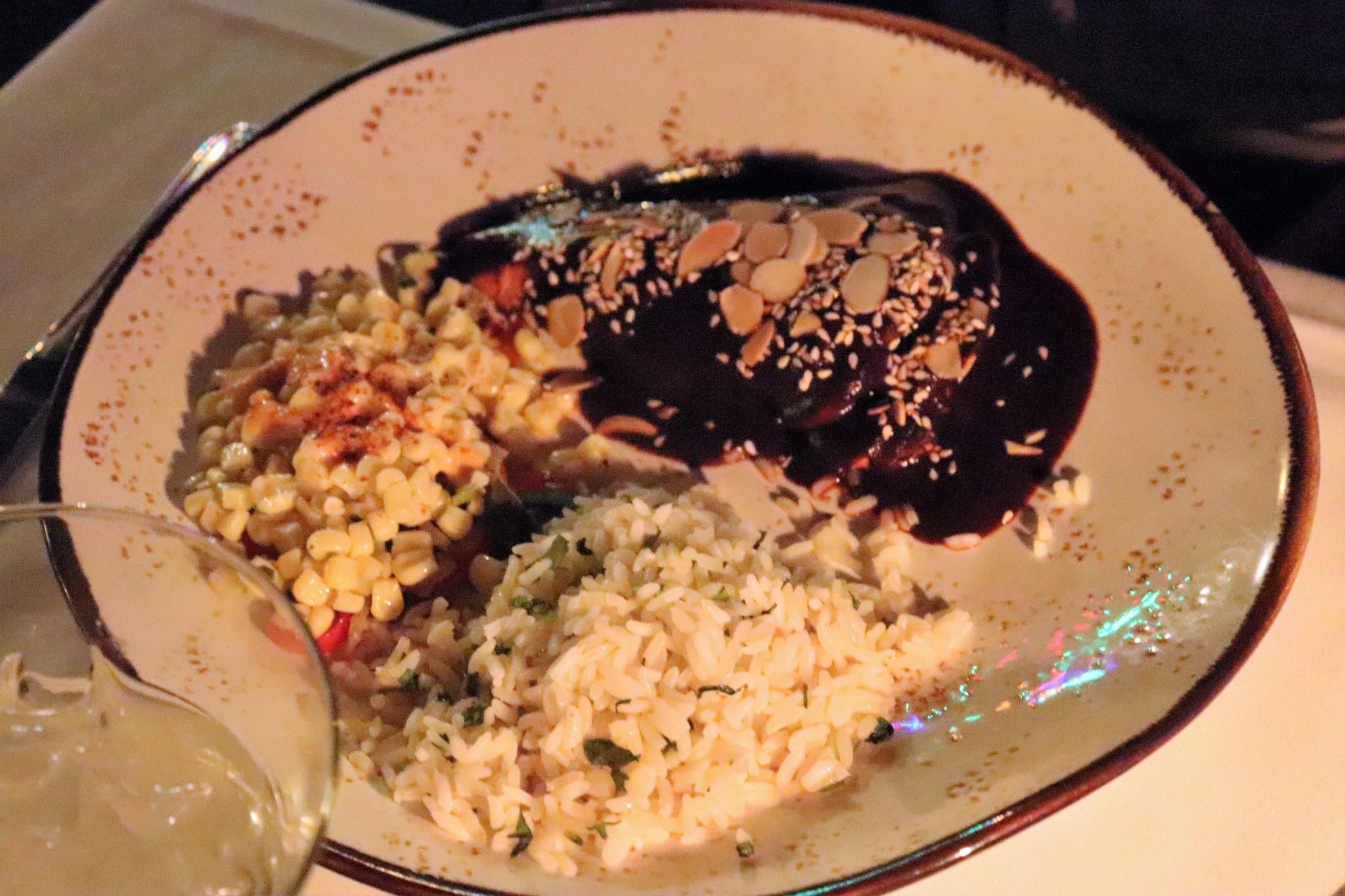 I knew he would order this because very often orders mole poblano at our local Mexican place! He seemed to enjoy this one as much as he usually does so I guess they’ve done a good job with it.

My mom got the Camarones al Chipotle (Chipotle-marinated Shrimp served with Roasted Potatoes and Green Beans): 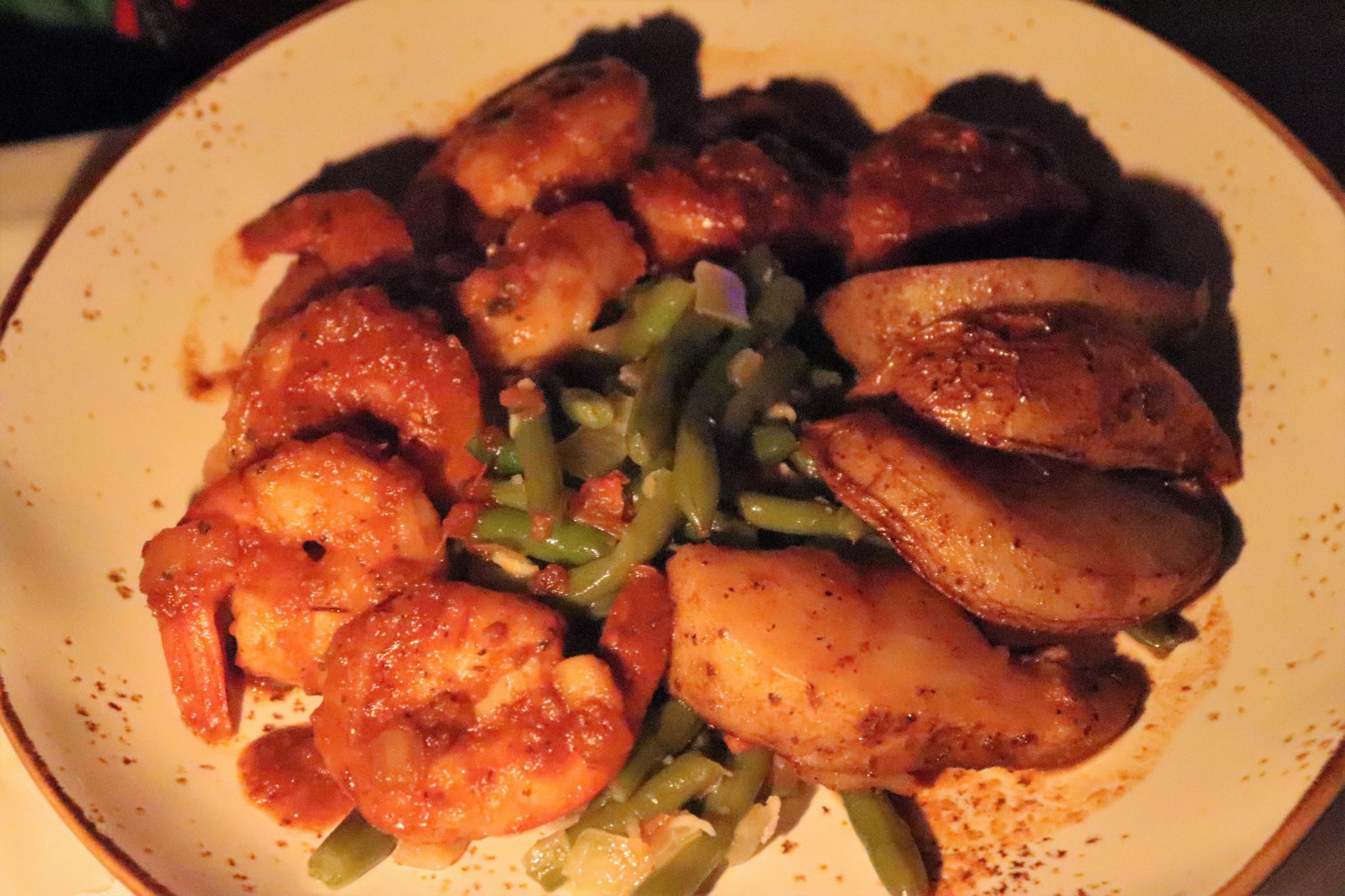 This was good, but not particularly spicy like you might expect from something with chipotle. I know Disney is trying to cater to the more American palates, but I feel like you could still turn it up a little bit in a Mexican restaurant.

Jason had the Chile Relleno (Poblano Pepper filled with Pulled Pork, Pine Nuts, and Almonds, topped with Roasted Tomato Sauce, served with a side of Cilantro Rice): 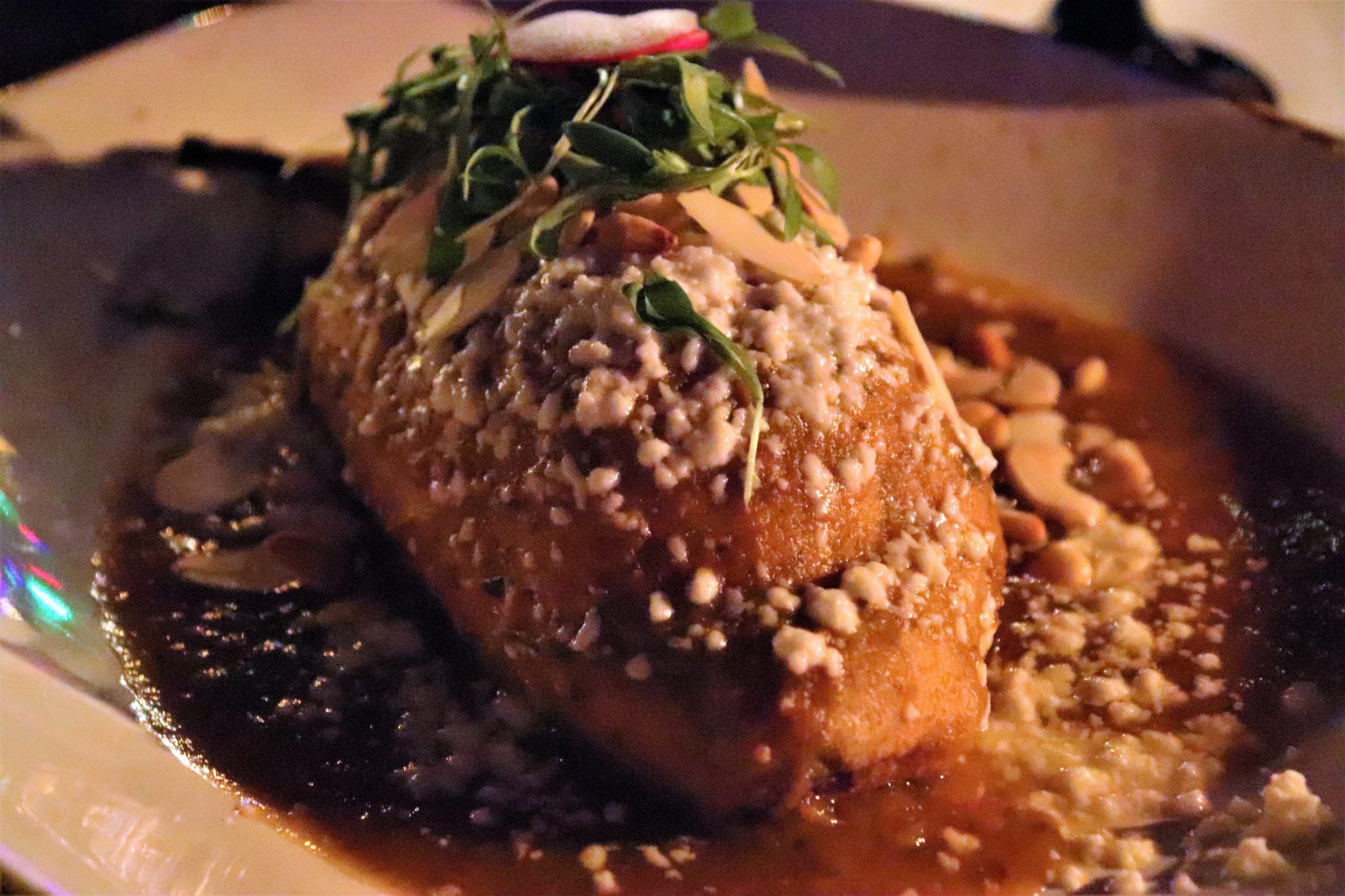 This was something a little bit different than what we might order anywhere else, but Jason seemed to enjoy it a lot. There were a lot of various flavors here but they worked surprisingly well together.

I had the Pescado A la Talla (Achiote-marinated catch of the day served with creamy poblano potatoes topped with queso fresco and crema mexicana served with plantains): 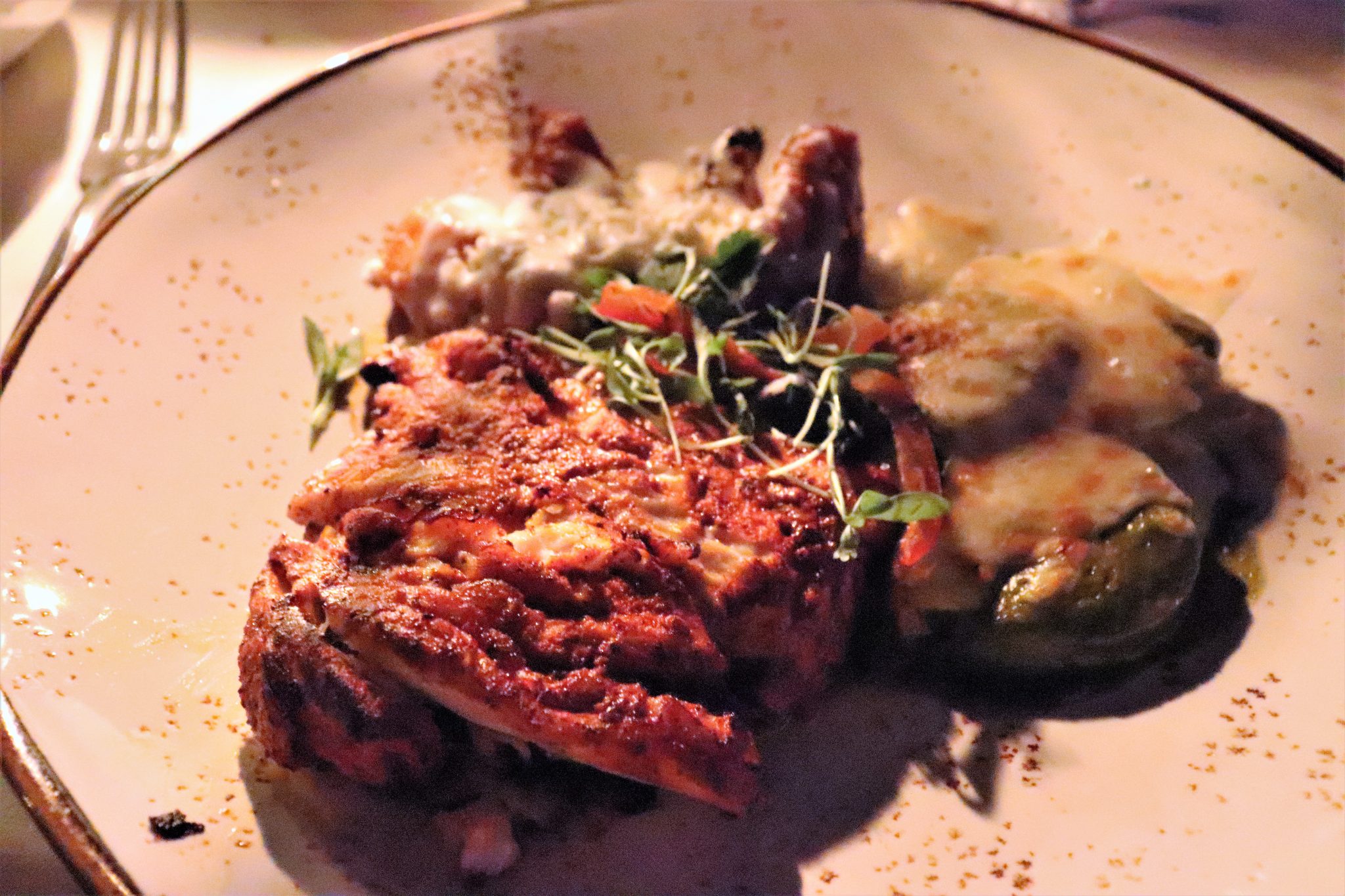 I apologize because I don’t remember what type of fish the catch of the day actually was. I’m pretty sure it was a white fish native to Mexico. The fish itself wasn’t anything special, to be honest. I didn’t eat all of it but the sides it came with were the real highlight for me. The plantains were sweet and delicious, and the potatoes covered in cheese were savory and so good.

There were 4 desserts on the menu, so of course we got one of each! My mom had the Flan de Coco (coconut custard topped with toasted coconut and a creme anglaise): 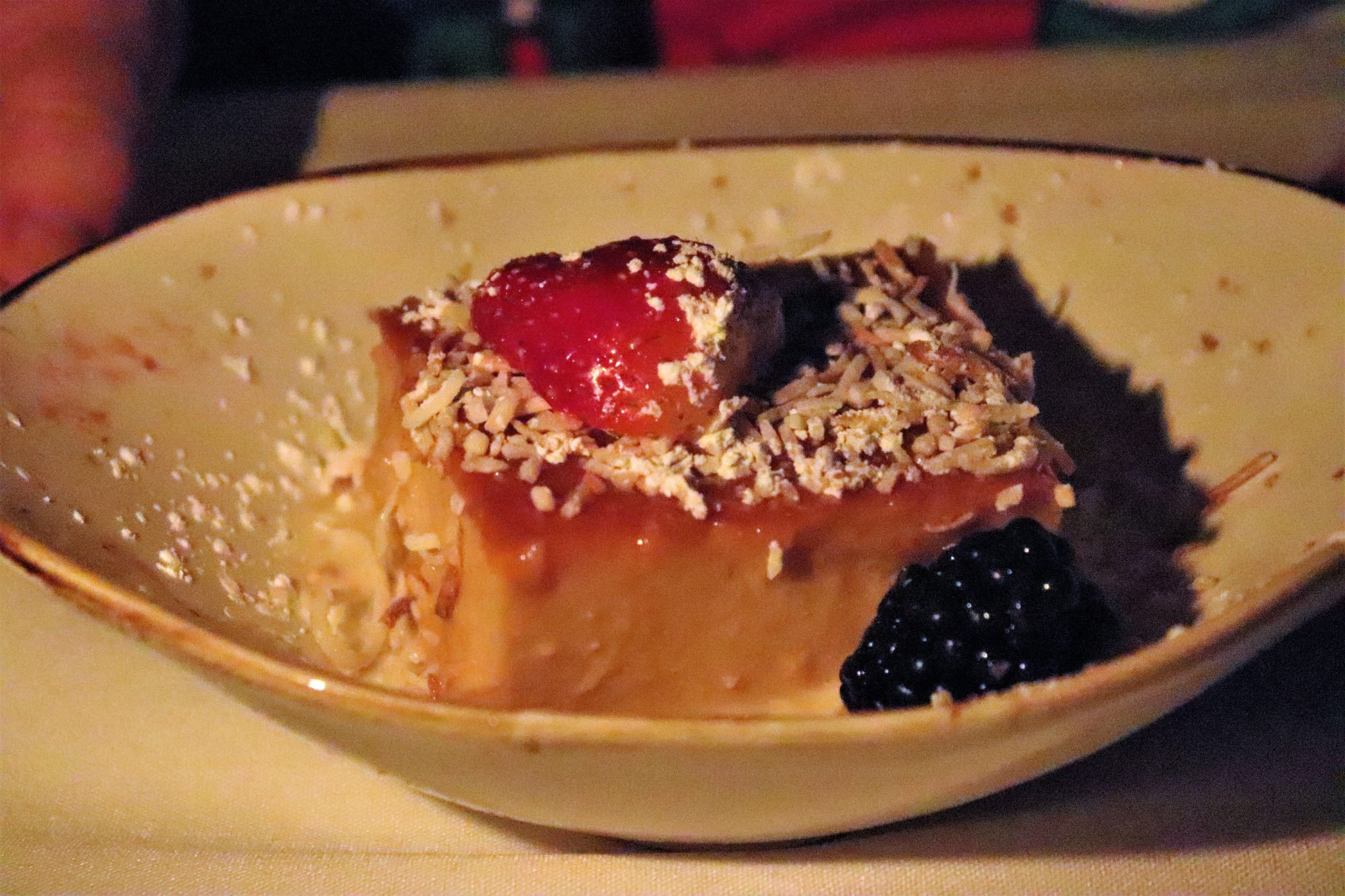 She enjoys flan and seemed to like this one, though I think she only had a bite or two because we were so full from the rest of the meal. She appreciated it was served with some fresh berries- that definitely added to the dish a little. 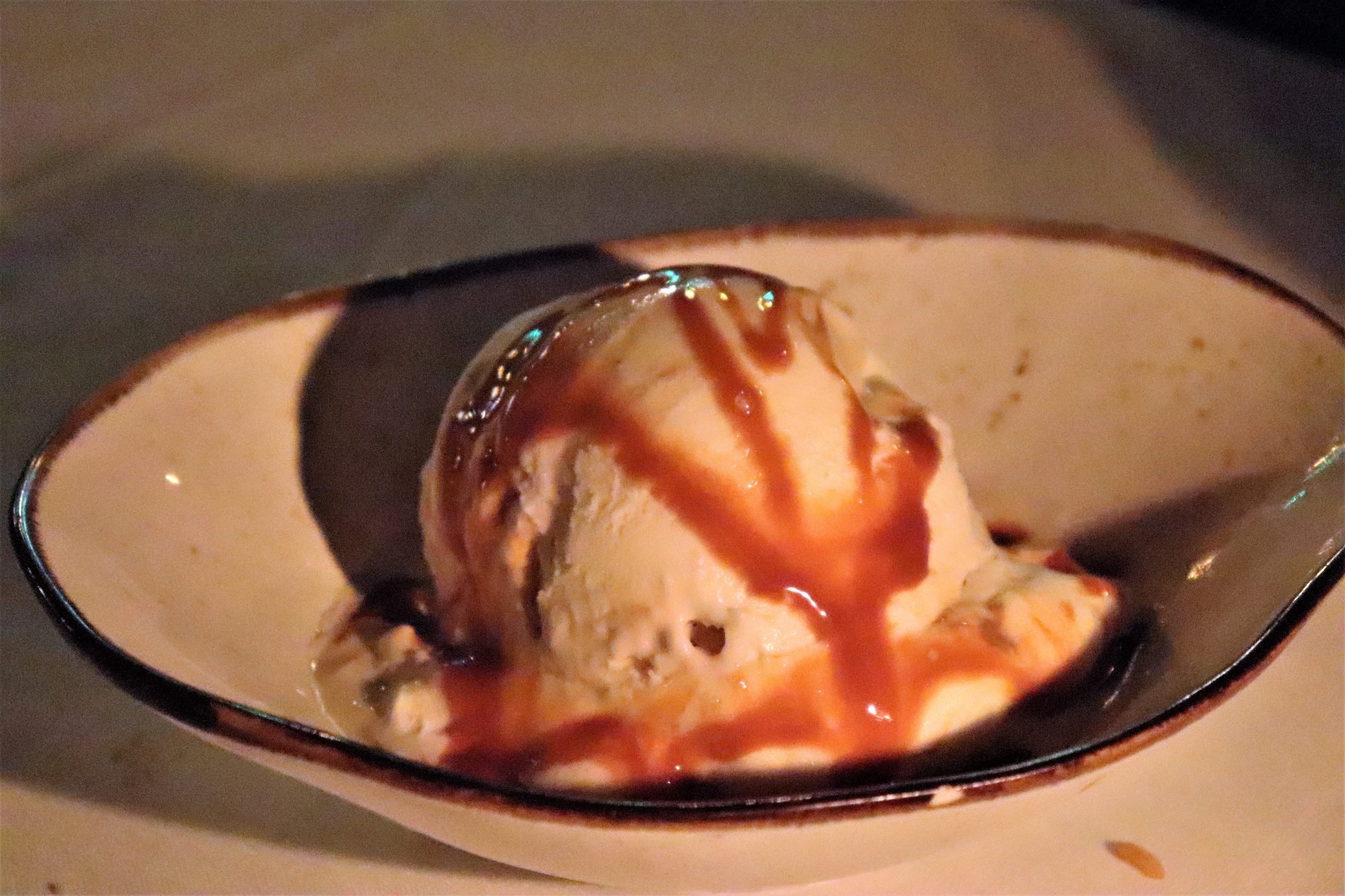 My dad is a huge ice cream lover so this was no surprise! And while ice cream seems like a pretty simple dessert, the flavor here was really great. We all had a bit of this to go with our desserts. 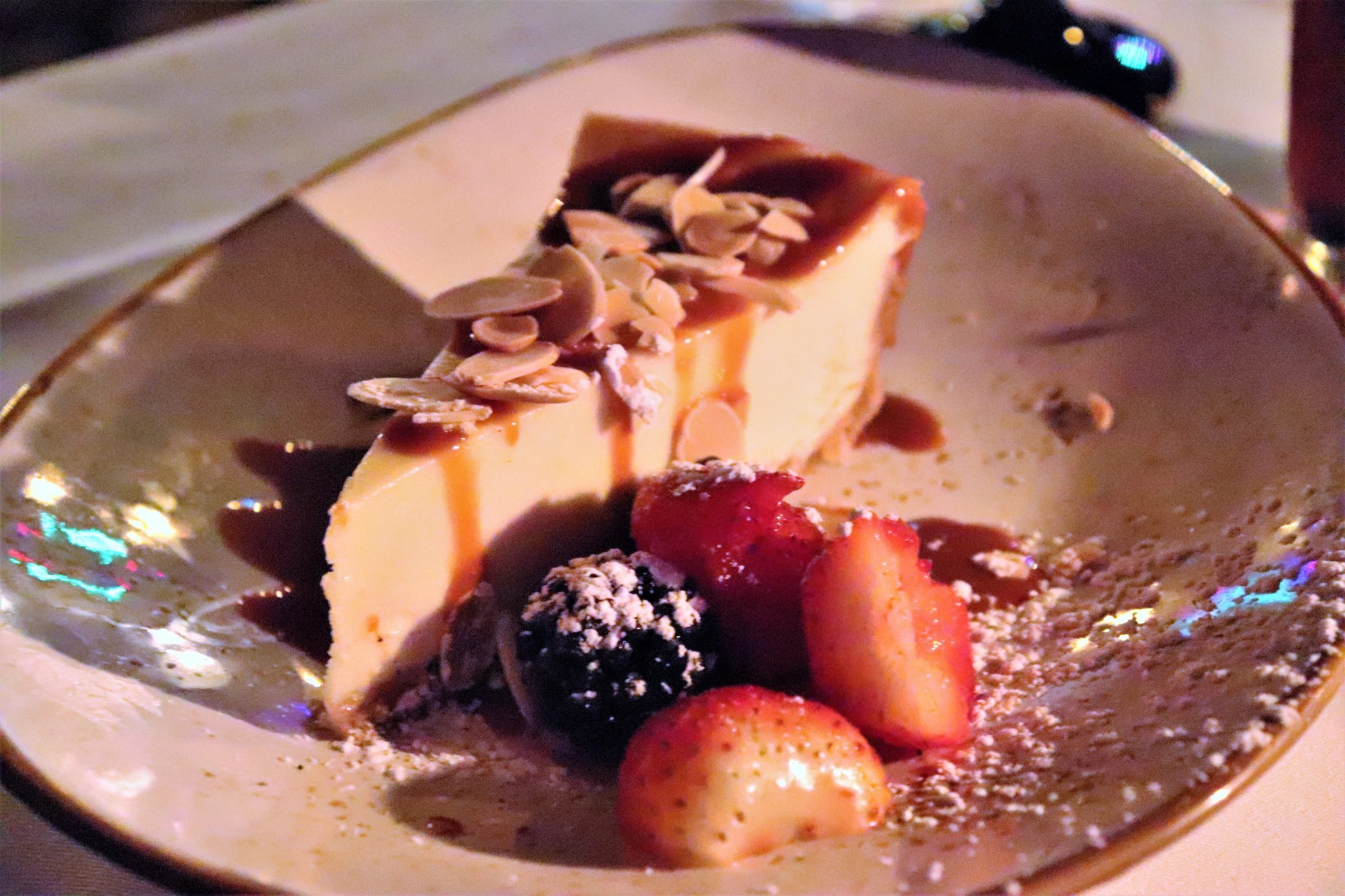 He enjoys cheesecake a lot and this one ranked as “just okay.” I thought it was interesting how many dishes included almonds, as I don’t typically think of that when I think of Mexican food.

Being the chocolate lover at the table, I went with the Mousse de Chocolate (dark chocolate kahlua mousse topped with brownie crumbles and strawberry coulis): 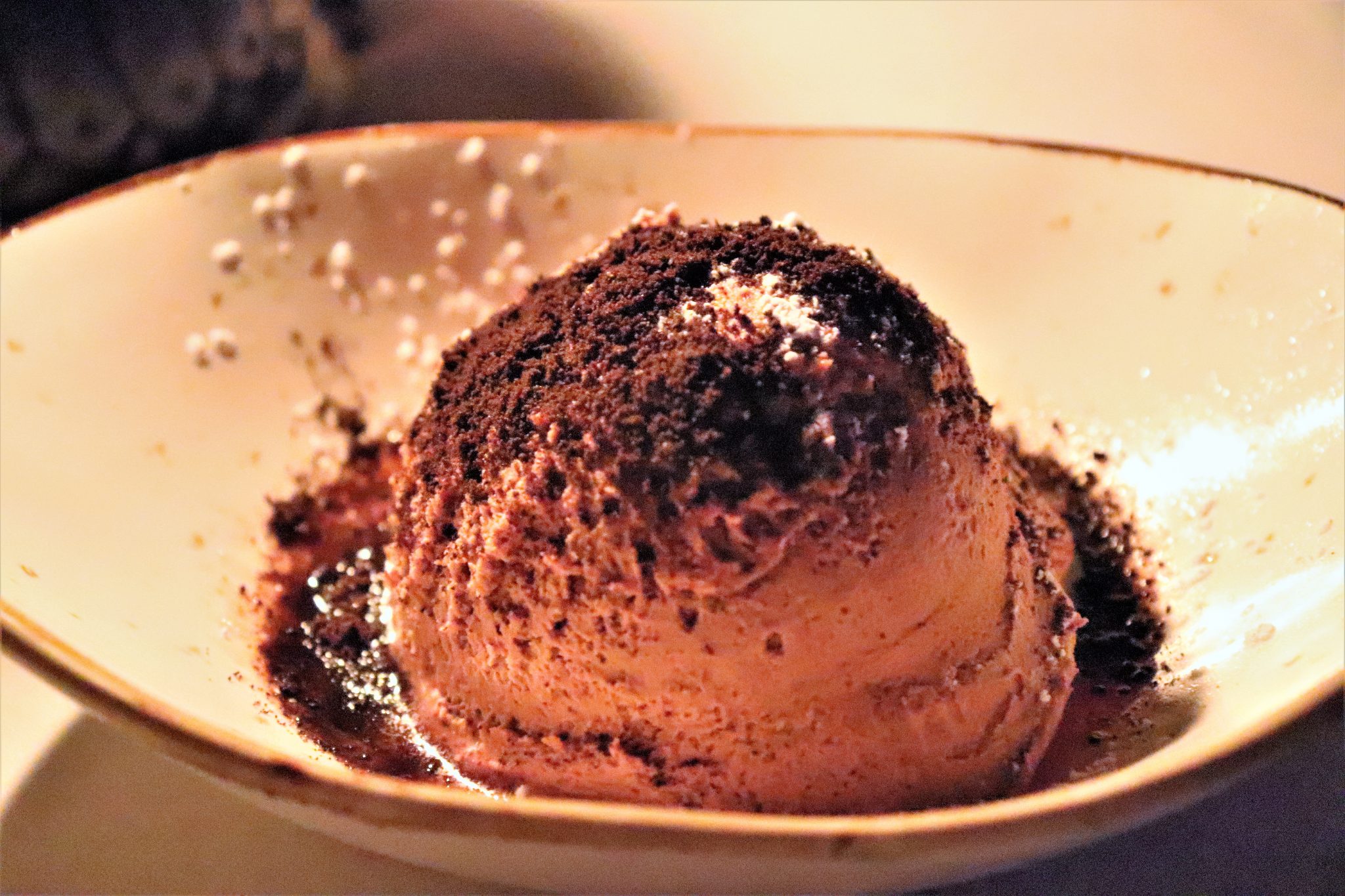 This was fine but basically just a typical chocolate mousse. I couldn’t really taste any kahlua flavor. It felt kind of one note so adding some of the strawberry coulis and the caramel ice cream made it a much more fulfilling dish. I don’t think I would have cared for it much if I didn’t have some of my dad’s ice cream to add to it.

Overall I will definitely be back to San Angel Inn – probably when I visit with my parents again someday! The appetizers and drinks are a highlight here, as well as the atmosphere. Dining at “twilight” by the “water’s edge” by a temple is neat, and it’s fun to watch all the people in boats going by and wave to them! If I have some queso, tostadas, and a margarita, I will be a very happy girl.

Have you been to San Angel Inn? What do you think of this restaurant?