So the title of this blog post is just a little bit misleading – because while this was the day the ship docked in Nassau, Jason and I never actually went ashore. So there won’t actually be anything about Nassau in this post!  We decided to use this as our “at sea” day, since we wouldn’t have a full day on the boat to enjoy all it had to offer otherwise, and we’ve been to Nassau before. 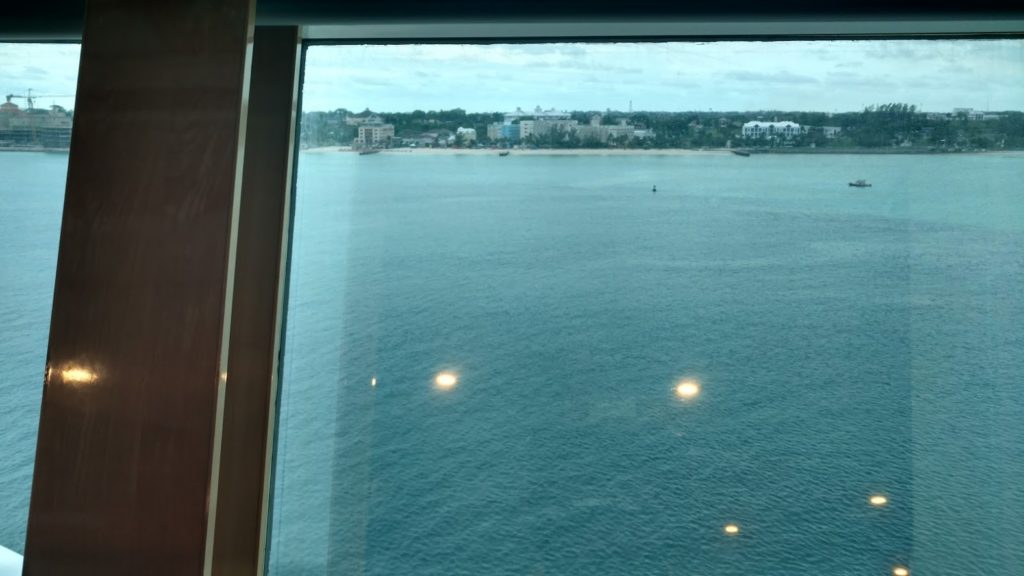 The view from the treadmill.

Because we didn’t need to get off the ship, we got to sleep in this day.  I still ended up getting up around 8, and decided to get a short workout in since I knew Jason would sleep longer. I went to the fitness center inside the spa to try out the treadmill. Since massively rich foods and lots of alcohol isn’t exactly the best thing to do to your body before running, I just did an easy 2 miles. I also had timed it well, because the fitness center was on the front of the ship with giant windows, and I was on the treadmill right as we were pulling into Nassau, so that was fun. The treadmills they had there were amazing too, it was the best treadmill I’d ever used. 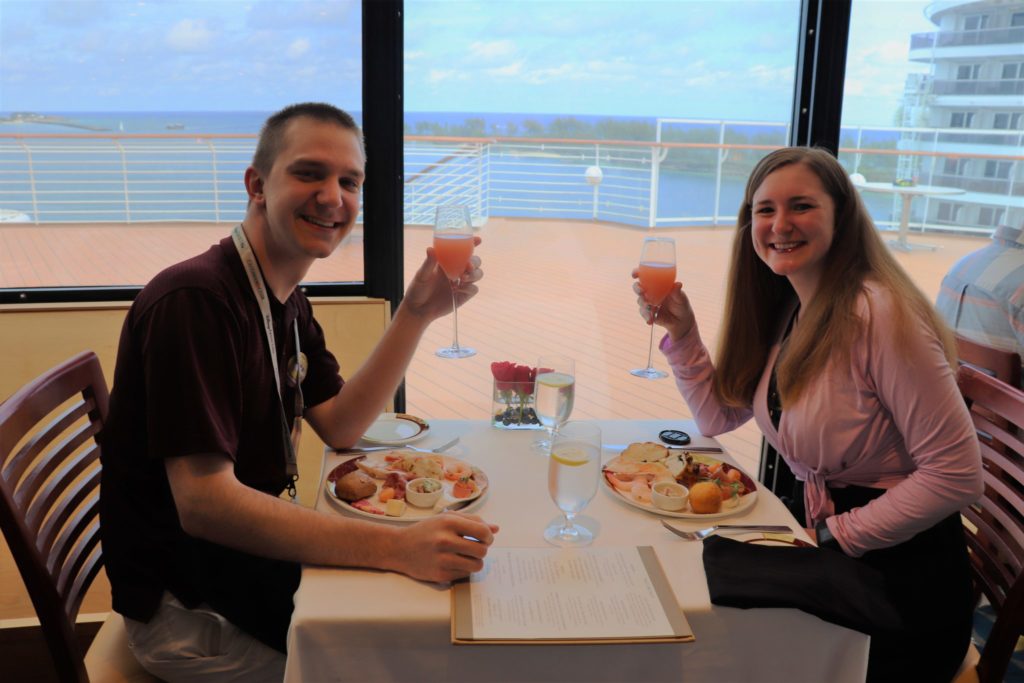 After showering and getting ready (and making sure Jason was awake!) it was off to Palo for brunch. This day also happened to be Jason’s birthday, so we were celebrating! Our server was top notch, and the food was amazing. It’s a combination of buffet and plated dishes, and you can order and eat as much as you want. It’s kind of an interesting combination of seafood and Italian food, which are two of my favorite things! 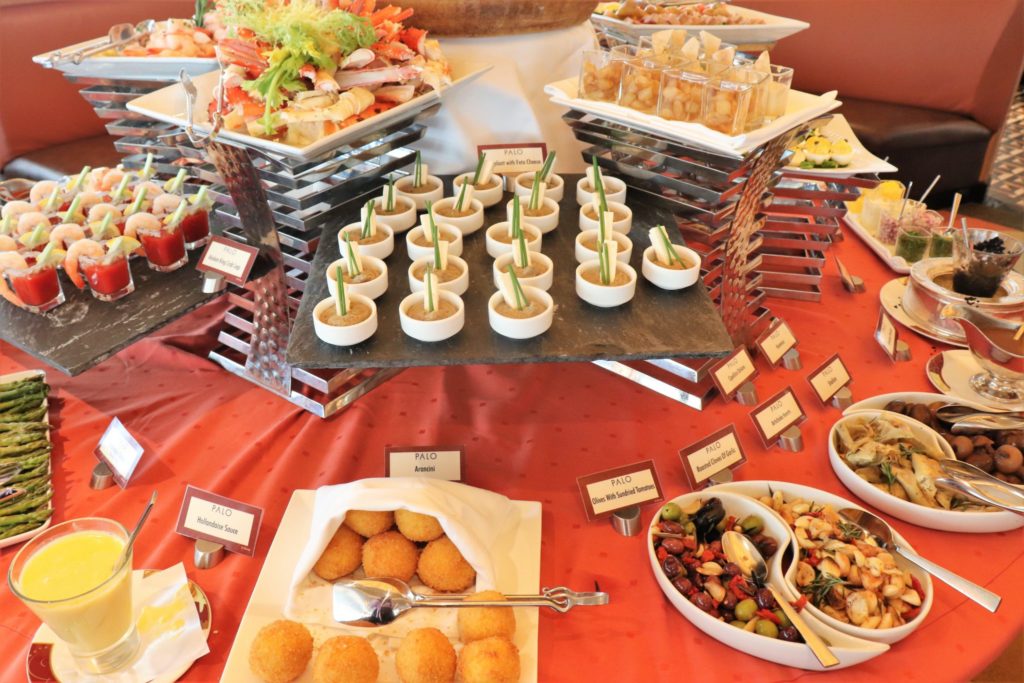 I tried as much as I could from the buffet. Pretty much everything was great, but I’ll point out a few favorites. I loved the prosciutto and melon, as well as the various cheese they had to try. There were sweet and delicious crab legs, and they were already cut open so you didn’t have to do any work. That’s when you’re really living the high life!  Speaking of, I had the chance to try caviar too. It’s definitely fishy but it’s also quite salty, and as a salt lover I did enjoy it when it was on some good bread or toast. And the desserts! So many delicious desserts on the buffet as well. 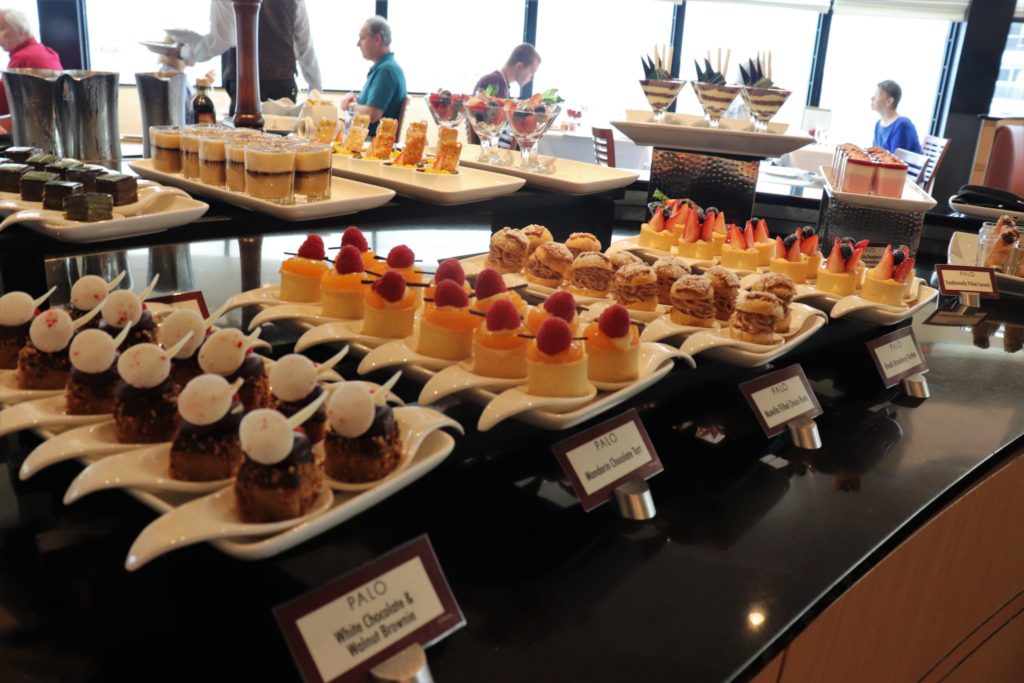 For a plated addition I got the eggs benedict, which was very good. Jason got a pasta dish which I tried and fell in love with. Definitely the best thing I ate on the cruise, and I probably ate at least half of it for Jason. My mouth is watering just thinking about it. Hopefully we can do Palo again on our next trip just for that.

After such a delicious and filling meal there was of course only one other thing to do – go to the Rainforest Room and relax, of course! We once again enjoyed the showers, the sauna, the scrubs, and of course the heated lounge chairs. 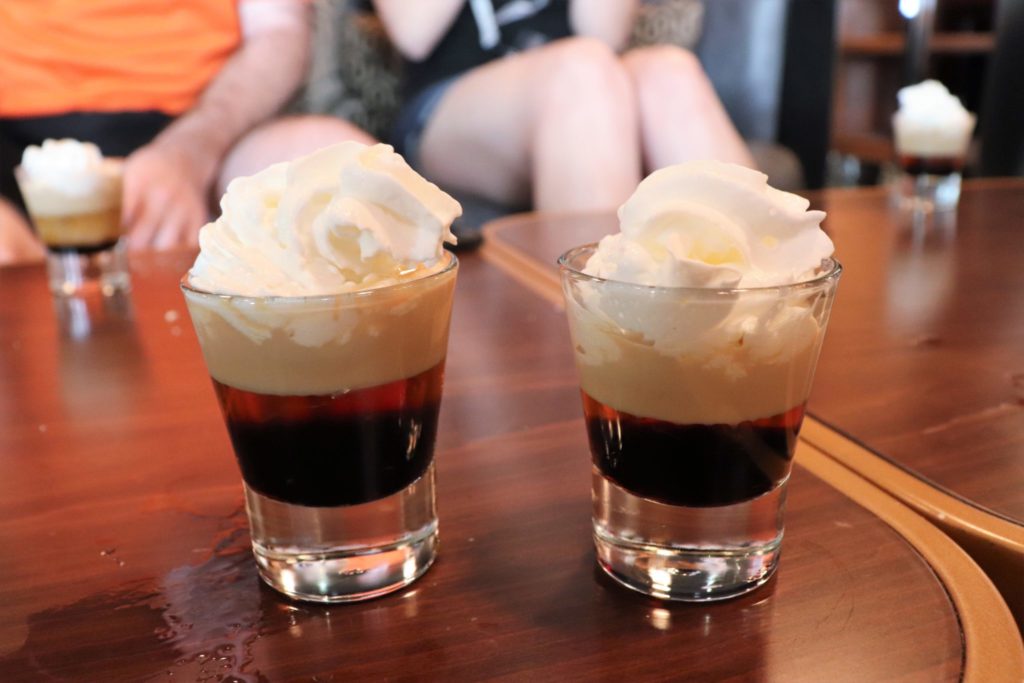 We were showered and dressed again by 2pm for our private mixology class which had been organized on facebook and took place in Keys piano lounge.  Two drinks were premade for us to try and we learned about how they were made and the alcohols in them. One of these was the Double Crowned, which is served at Luimere’s, and was definitely one of our favorites. Then we got to make and mix some of our own drinks as well. They were all different and all delicious. I liked the last one best I think. It was called Kissed with Love, and was layers of disaronno, amaretto, Bailey’s, and topped with whipped cream.

Once we finished there we decided to head up to the deck to enjoy ice cream, the pool, the hot tub, and drinks! I also finished the book I was reading and took a bit of a nap on a deck chair. 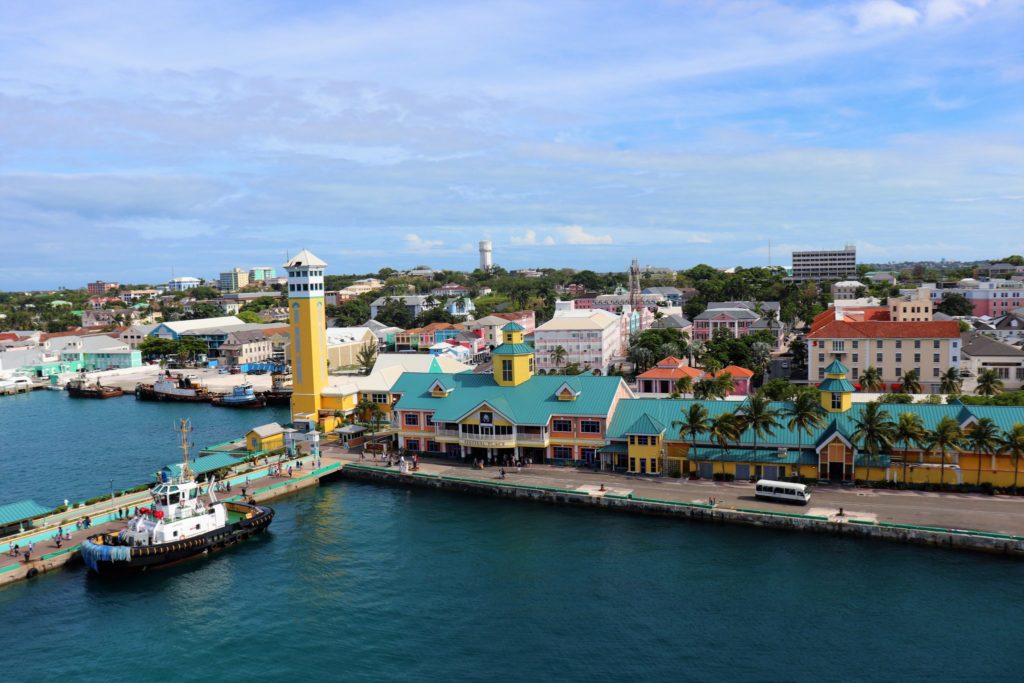 We decided to skip the show this night. It was the variety act that they bring in, this time a magician act called Justino and Daniela – funny enough, this was the same act we’d seen over 2 years ago on the last Disney Cruise we went on, so we didn’t feel the need to see it again. 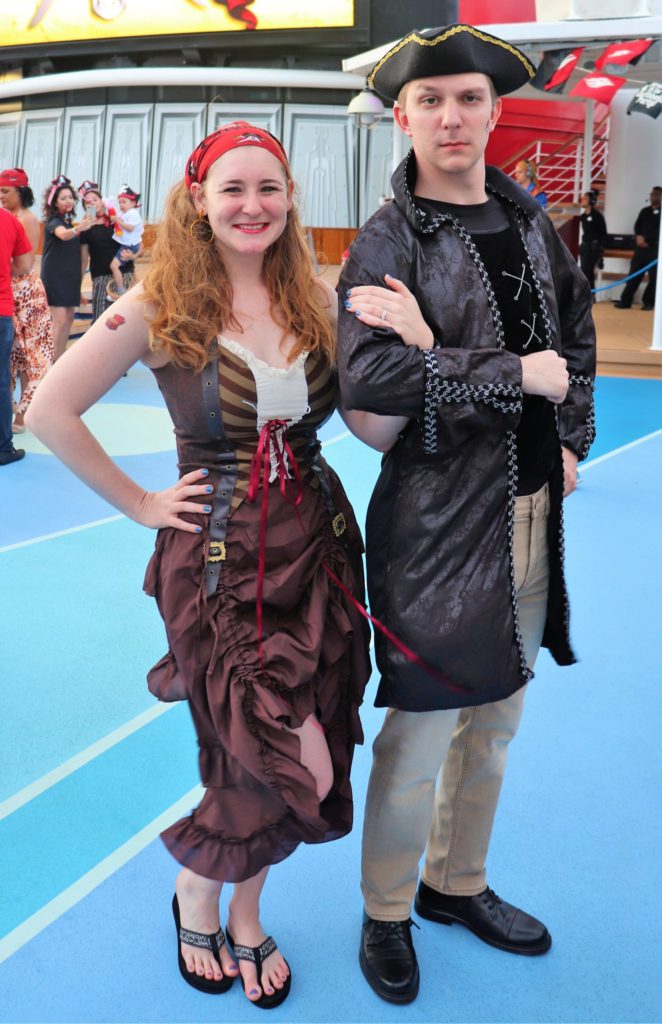 That meant the next big event we had lined up was the Pirates in the Caribbean deck party and fireworks! Jason and I went back into the room to change into our pirate costumes. The deck party is cute, but it’s especially cool to see fireworks at sea. We had a pretty good view! 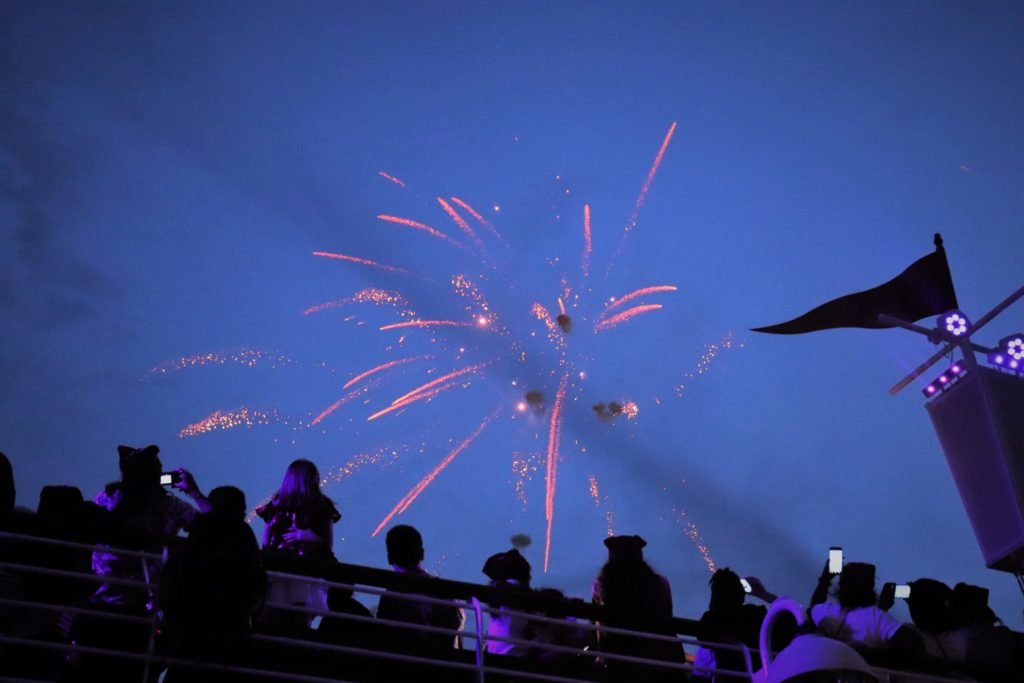 Dinner for this night is a “pirate” menu, and we were back in Rapunzel’s for it. I think this might have been the most unremarkable dinner of the cruise. Nothing we had was bad, but there was nothing at this meal that particularly wowed us. My dessert was a chocolate rum cake and you could definitely taste the rum! 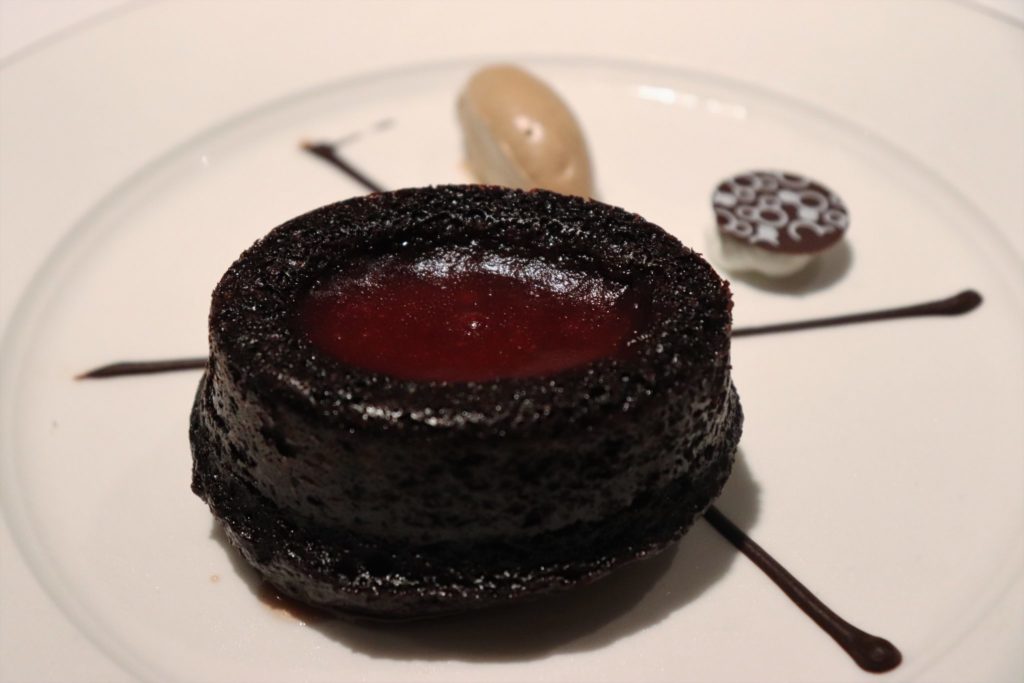 And then it was off to bed. We would be at Disney’s private island, Castaway Cay, the next morning, and I’d be up bright and early to run the Castaway Cay 5k!

What part of our “Nassau” day sounds best to you?