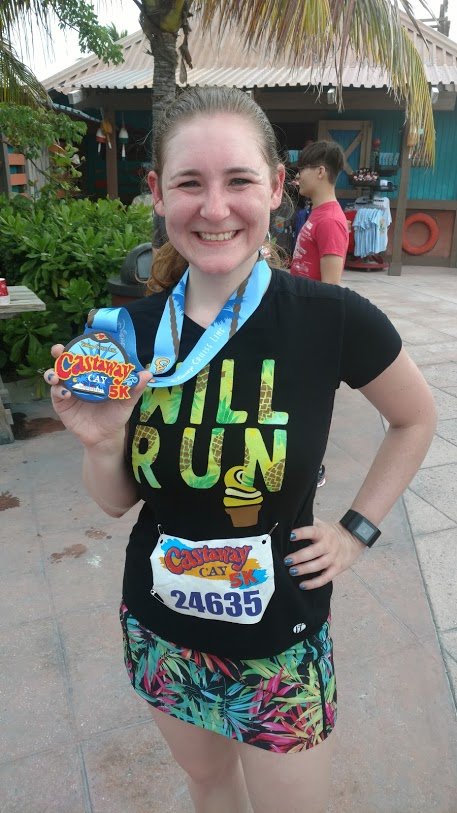 If you’ve ever been on a Disney Cruise and had a chance to visit Castaway Cay, you know just what a good day this could be! And while the weather was looking a little iffy, we were still excited to get off the ship and enjoy Disney’s private island.  I had signed up for the Castaway Cay 5k, so we got off the ship first and went to run that.  Even at 8am when the sun isn’t out yet it is very hot and humid to run!  I did it though, and dripping sweat I crossed the finish line.  But I got a sweet rubber medal and just a tiny bit less guilt about how much I’d been eating and drinking on the cruise! 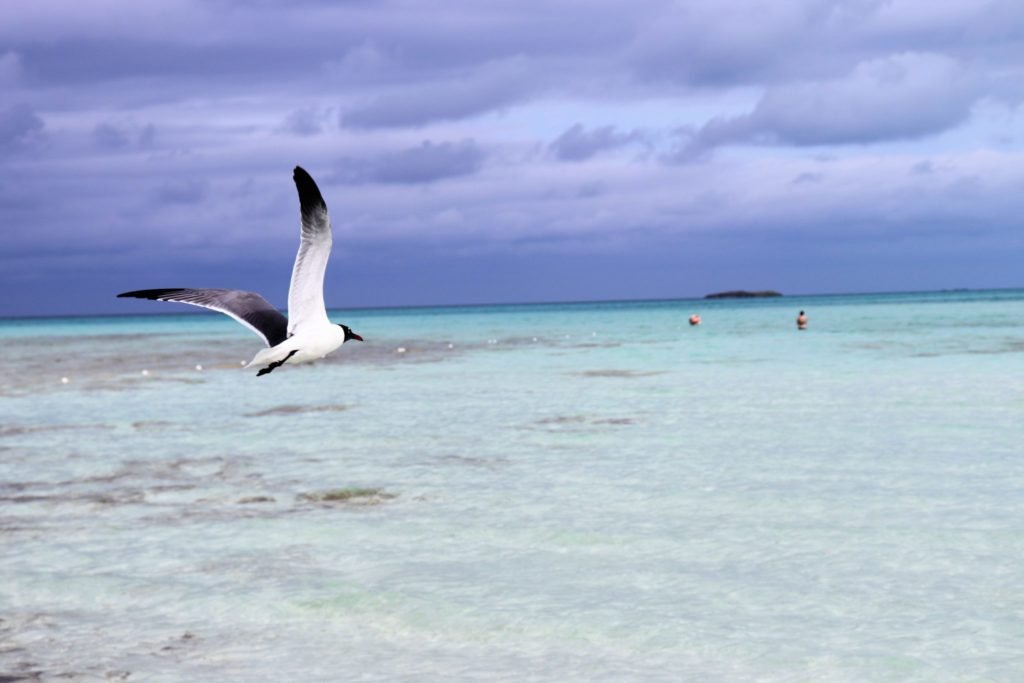 After changing into a bathing suit and attempting to towel down, we headed over to Serenity Bay, which is the adults only beach and really nice and peaceful. Despite the humidity it was cloudy and not exactly sunny, and the water wasn’t super warm.  We waded out for a bit and enjoyed the water and found a starfish!  After some time in the ocean I headed back to a lounge chair to read my book and enjoy a Konk Kooler, one of the specialty drinks on Castaway Cay. 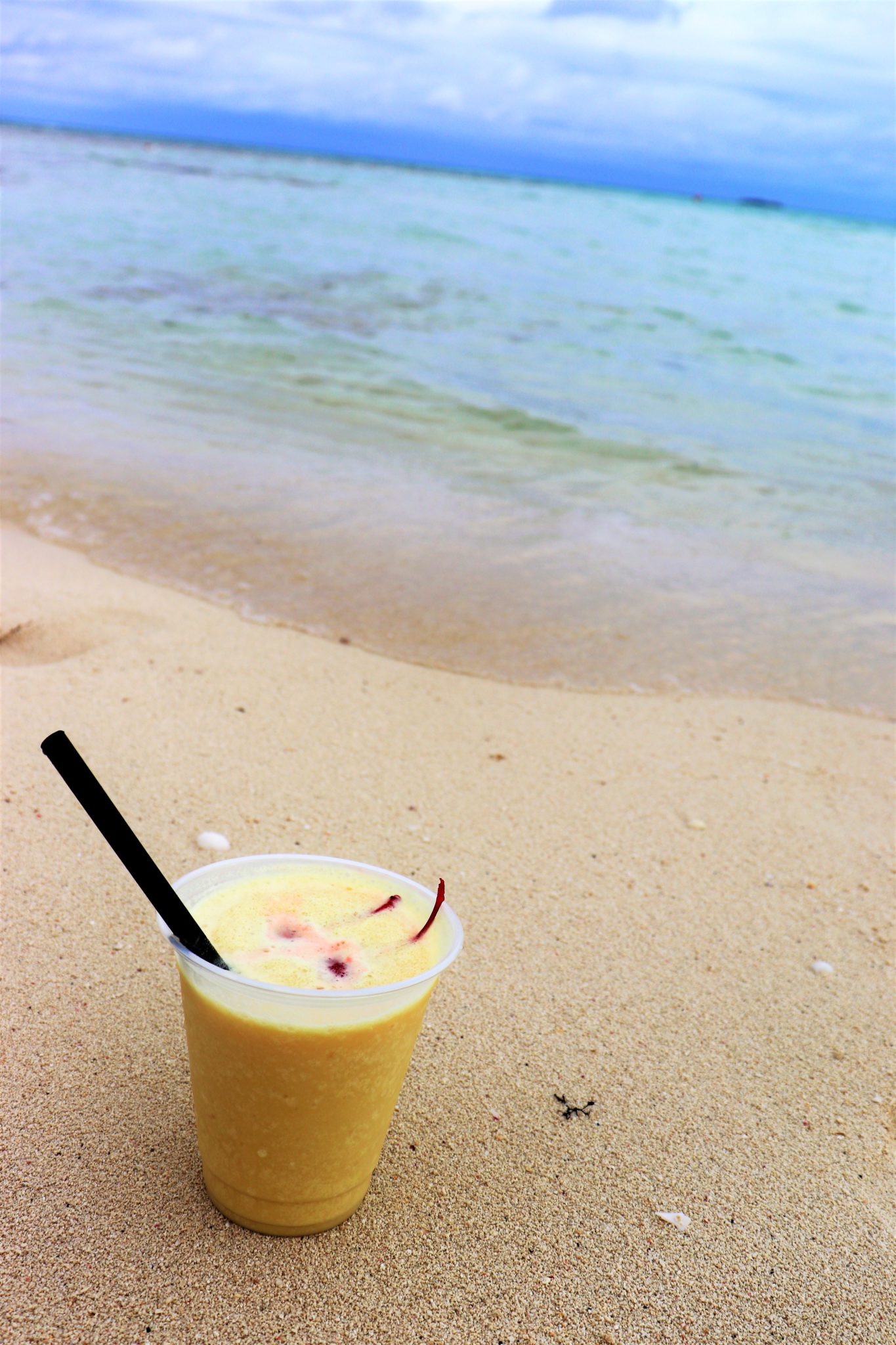 As soon as we could possibly get lunch we headed over to the buffet by Serenity Bay. They have barbecue, so you can get typical stuff like hot dogs and hamburgers, as well as ribs and grilled chicken and some other things. There are salads, fruit, and soft serve ice cream machines too! 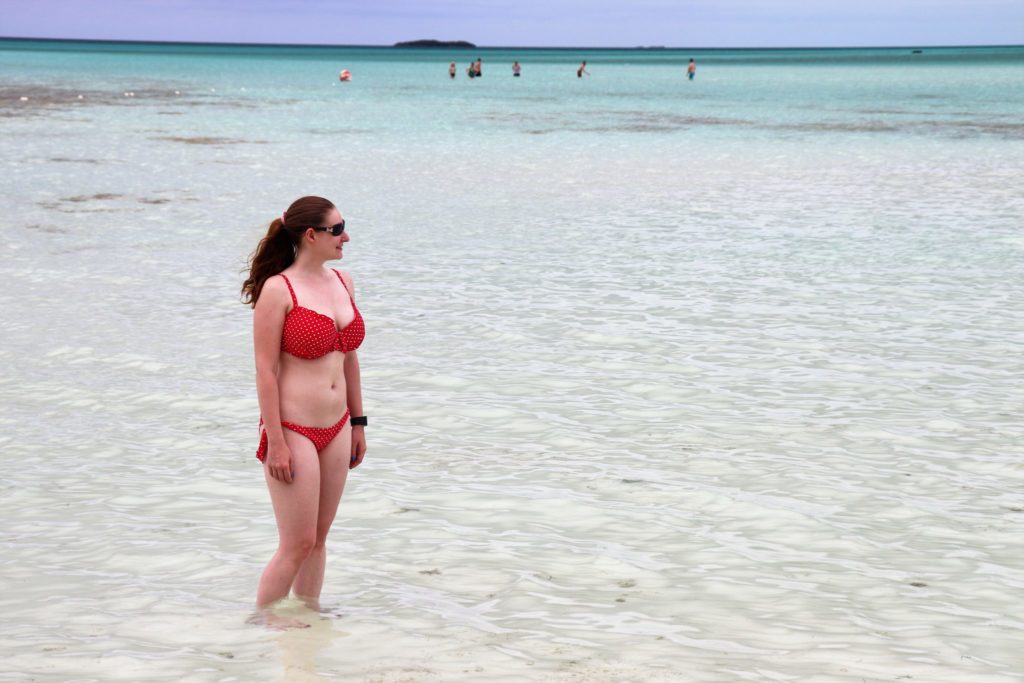 After a little more time on Serenity Bay we decided to head over to the family beach on the way back to the ship so we could try some of the water slides over there.  They were all right, I did each of them once. They’re fun but of course don’t compare to anything in an actual water park. It’s neat to empty right out into the ocean though! Jason and our friends did them a couple of times while I went around taking some photos. 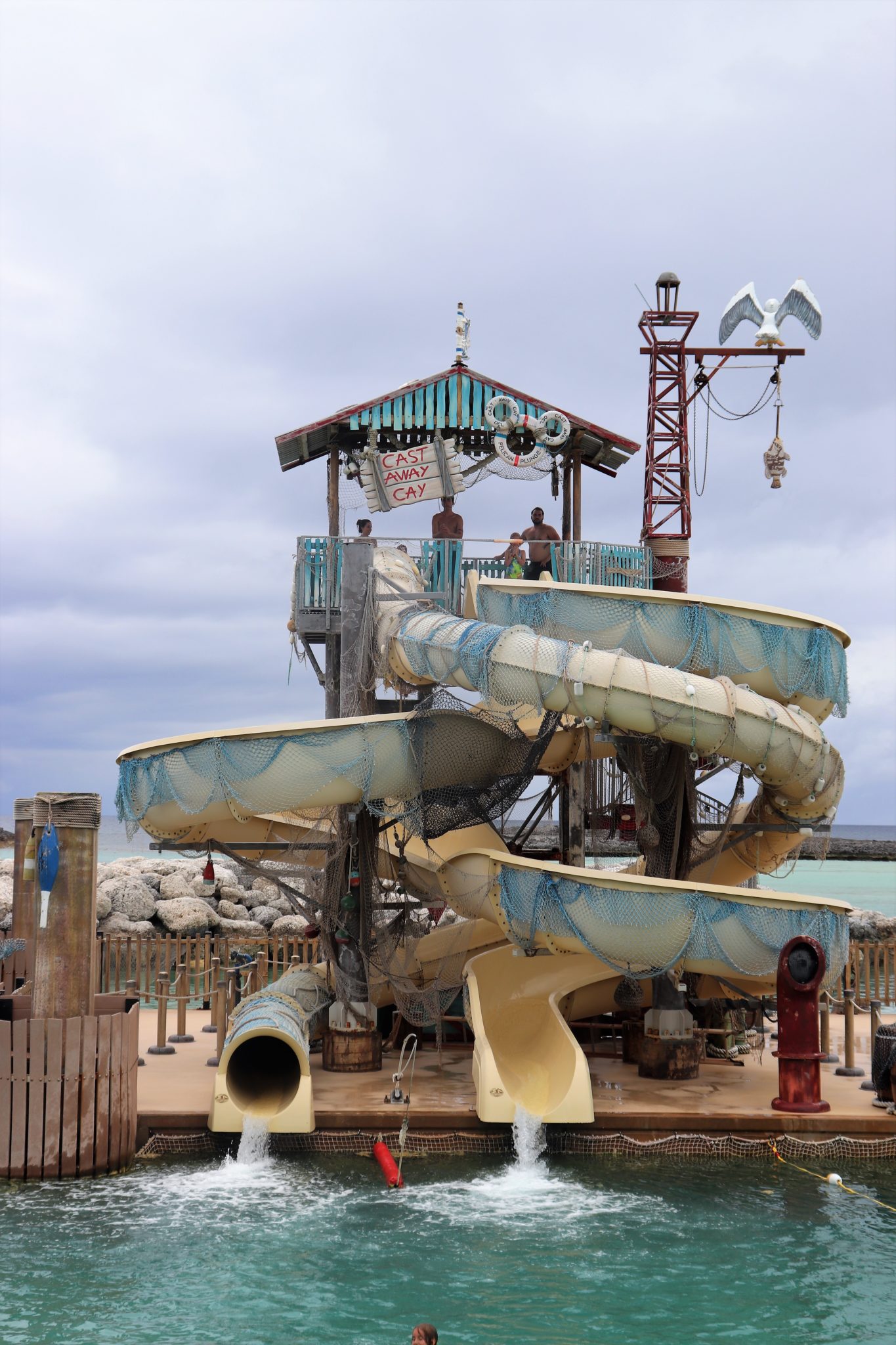 Once they were done we headed back to the ship and it started to pour just as we were getting on.  I’m glad we were able to enjoy our beach time before the rain!  Jason and the others wanted to try the water slide on the ship too, as they hadn’t gotten around to it, but it was closed all afternoon at that point due to the rain so they never did it. Instead we ordered some room service and I took a little nap.

Of course there was one thing we definitely had to squeeze into the day today – another trip to the Rainforest room! More rest, relaxation, and reading a book on those amazing heated loungers.  We also had some sugar scrubs left to use, which we did in the sauna and smelled amazing.

The last show of our cruise was “Dreams,” which was a very sweet, very “Disney” show about a girl who has trouble believing until she finds herself meeting a number of different Disney characters.  It’s fun to see a lot of your favorites on stage. The only thing I thought was a bit odd was that almost every main female part was played by 1 of 3 women who kept changing. So when they all came out at the end you were missing half the princesses because these women couldn’t be multiple people at once. I can’t believe Disney Cruise Line couldn’t hire more talented female singers so they wouldn’t have to double up like that.  I’m sure the kids don’t really notice but I found it kind of distracting that it was just the same people over and over again.

Unfortunately in between the show and dinner it was time to pack, since we’d be leaving early the next morning. That is definitely the worst part of vacation! 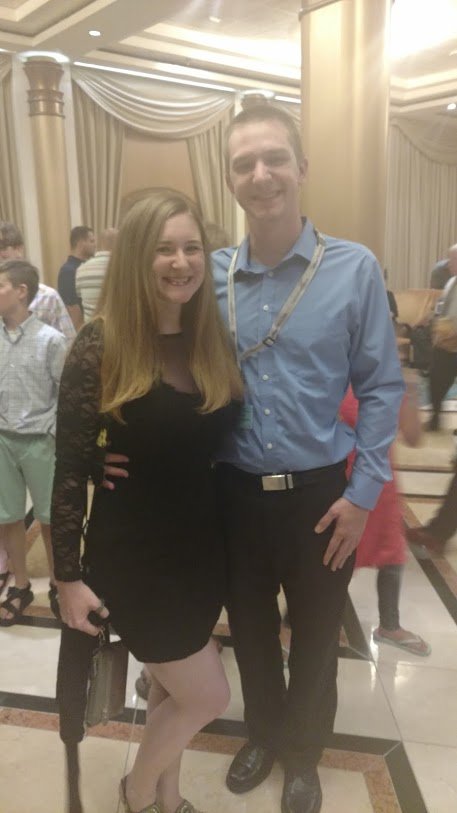 Dinner that evening was the optional dress up night, so we tried to look a little fancy, and we were in Lumiere’s. As a Beauty and the Beast fan I loved the atmosphere of this restaurant. The chandeliers with the rose and the petals are gorgeous, and there’s a really nice mural on the back wall. 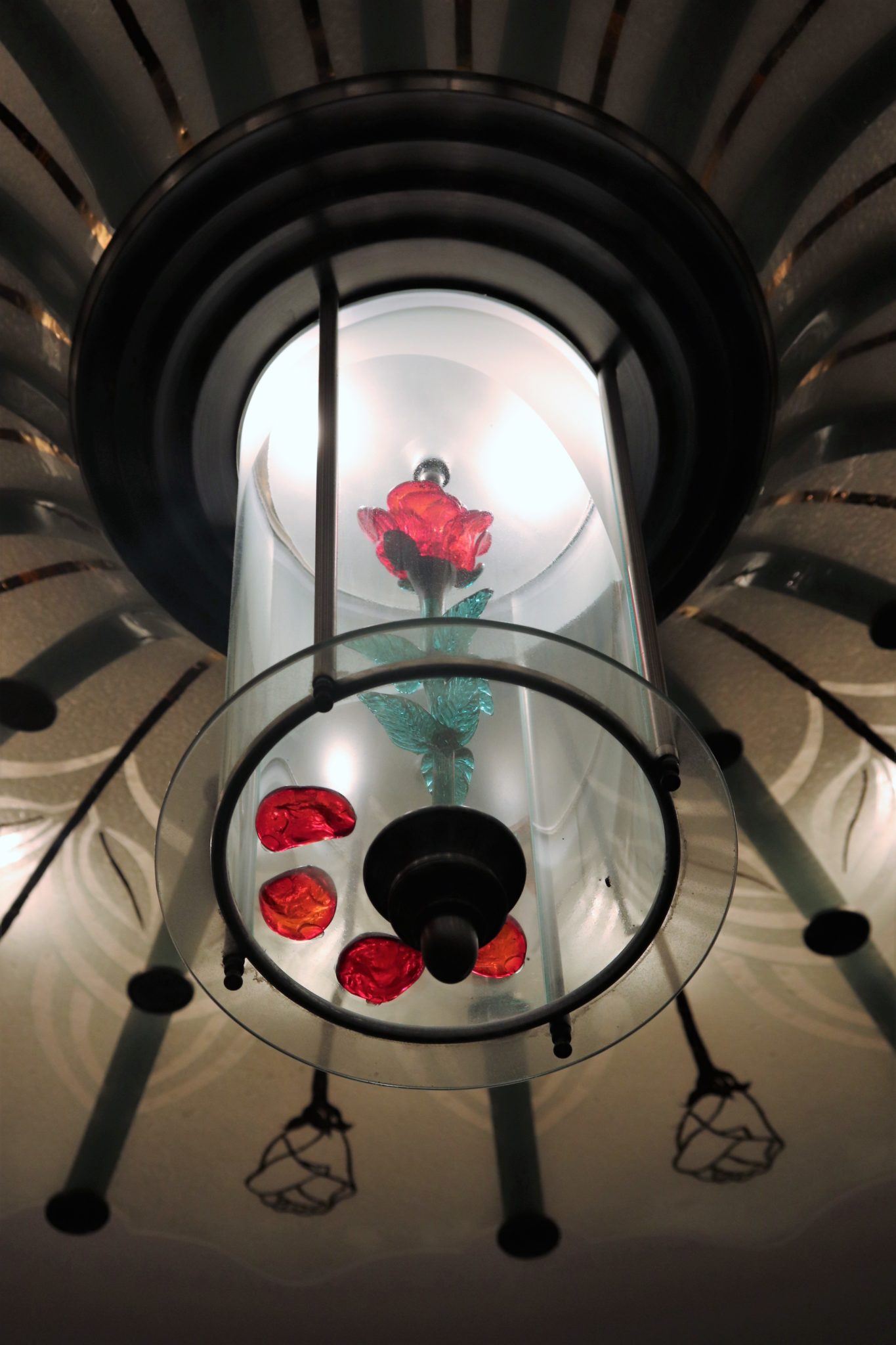 The food here was all right. The pasta dish that I ordered I was warned that “a lot of people don’t like it.” I thought it was fine, though it is a unique taste from I think tarragon which might turn some people off.  But if you have that many people who complain about a dish, why even keep it on the menu? There are so many other pasta dishes you could have!  This restaurant has one of my favorite desserts of all time, which is the Grand Marnier souffle. So, so delicious.

After dinner it was just back to the room to finish last minute packing and get ready to leave early in the AM. Jason and I were planning the about 4 hour drive up to Orlando to spend two days in Disney World before ending our vacation, so we wanted to get on the road as soon as possible!

What would you like to do on Castaway Cay?