Last week I had the opportunity to take my second Disney cruise on board the Disney Magic! A Disney cruise is a great experience, so I figured I would share a bit of a trip report with you of each day on our 4 night cruise.  The Magic left from Miami and stopped in Key West, Nassau, and Castaway Cay. 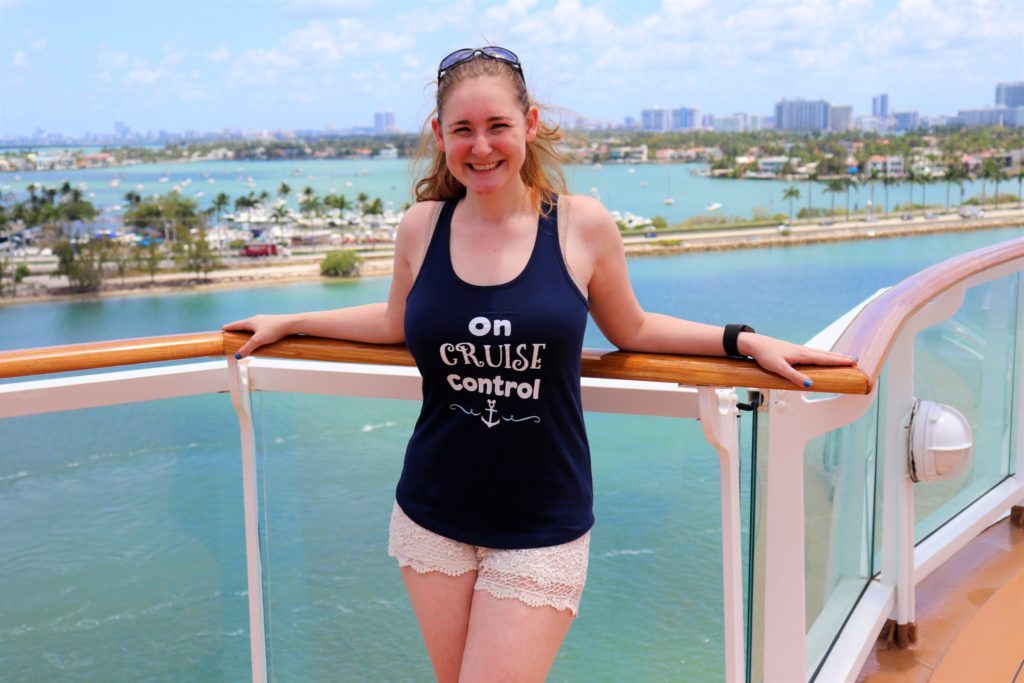 Our ship departed on a Wednesday, and we flew into Ft. Lauderdale the day before, drove to Miami, and stayed in a hotel overnight.  The morning of our departure day we drove to the port and got checked in quickly and easily. Even though our arrival time was 11:00am, we didn’t get on the ship until about noon.  Staterooms would be ready at 1:30, so we had some time to kill before then! The first thing Jason and I did was go to the Rainforest Room at the spa and sign up for the couple’s pass for the trip.  It’s one of his favorite things about cruising on Disney! 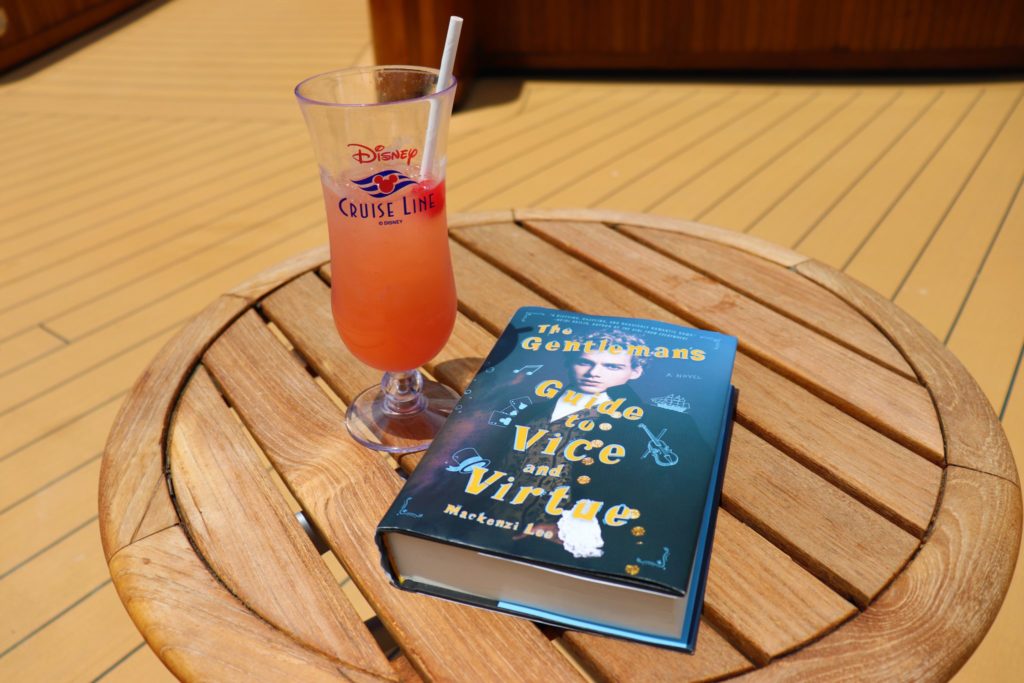 We’d had breakfast at the hotel around 9:30 so we weren’t really hungry for lunch yet, so we went to the adult quiet pool, ordered the drink of the day, and just sat around. I read my book and enjoyed the sun until we could go to our stateroom.  After visiting the room and dropping off some of our carry on stuff, we then hit the buffet at Cabanas.  The food was okay, but I was very happy to get some soft serve ice cream!

We returned to the room after eating to see if our luggage was there and to unpack a bit (I had my suitcase but Jason didn’t have his yet).  We attended the mandatory assembly drill, which is pretty painless.  And then as everyone else headed up to the Sail Away party, Jason and I went to… the Rainforest Room!  I just find the Sail Away party to be overly crowded, and you basically have the spa to yourself at this point. 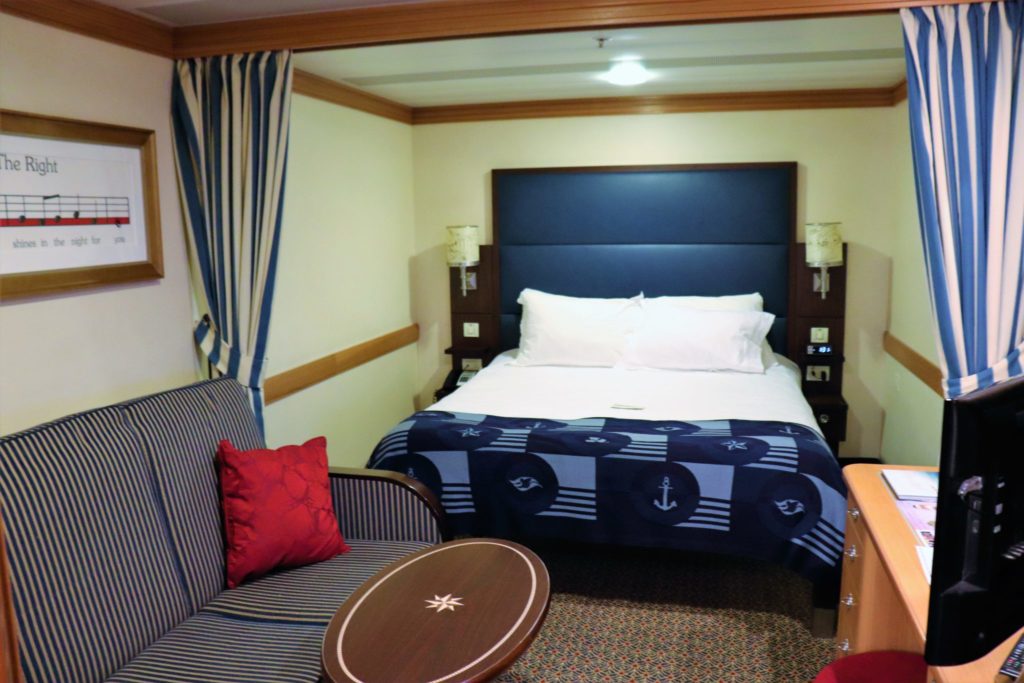 The Rainforest Room is a section of the spa that has heated loungers, steam rooms, and different showers that you can enjoy. The pass for two people for the length of the cruise was $144.  The room on the Magic was just redone and reopened last month, but it’s still smaller and has less to offer than the Dream – fewer showers, steam rooms, and loungers, plus the Dream had two hot tubs! That doesn’t mean we didn’t still enjoy it though. I love the tiled heated lounge chairs and we spent some time in there until about 5:30, when we showered, changed, and headed to the show that evening. 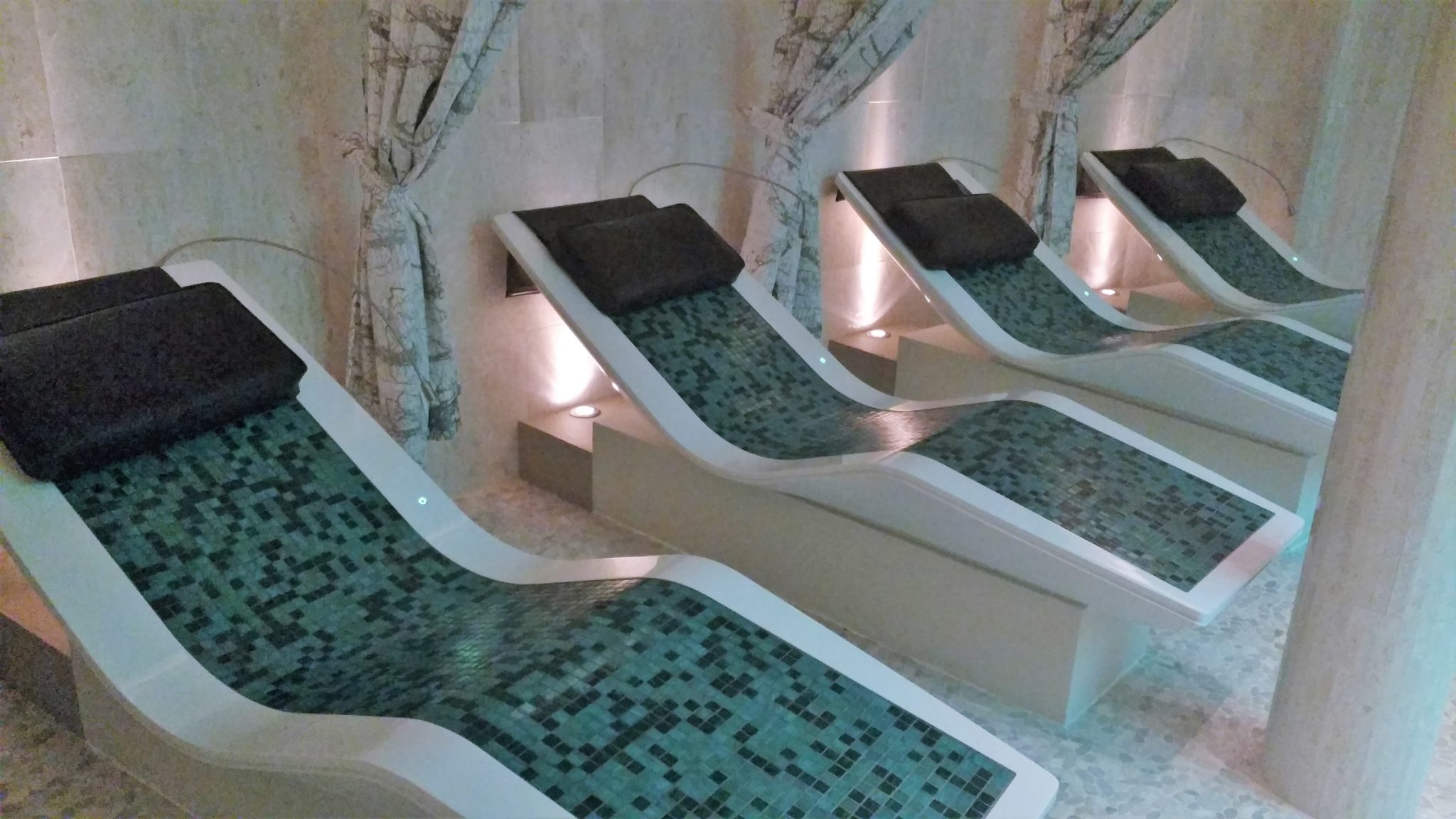 We had selected the late dinner this time around, which I still have mixed feelings about. The earlier seating has a lot of kids, so it seems natural to do the later seating, but a 4 course dinner starting at 8:15 means you’re there pretty late.  So the show came before dinner, and it was called Twice Charmed. A twist on the Cinderella Story, Lady Tremaine is visited by her Wicked Fairy Godfather who offers to try and change their fates by reversing time – for a price, of course.  It sounds cheesy but I actually really enjoyed this show.  It was funny and kind of poked fun at itself too. 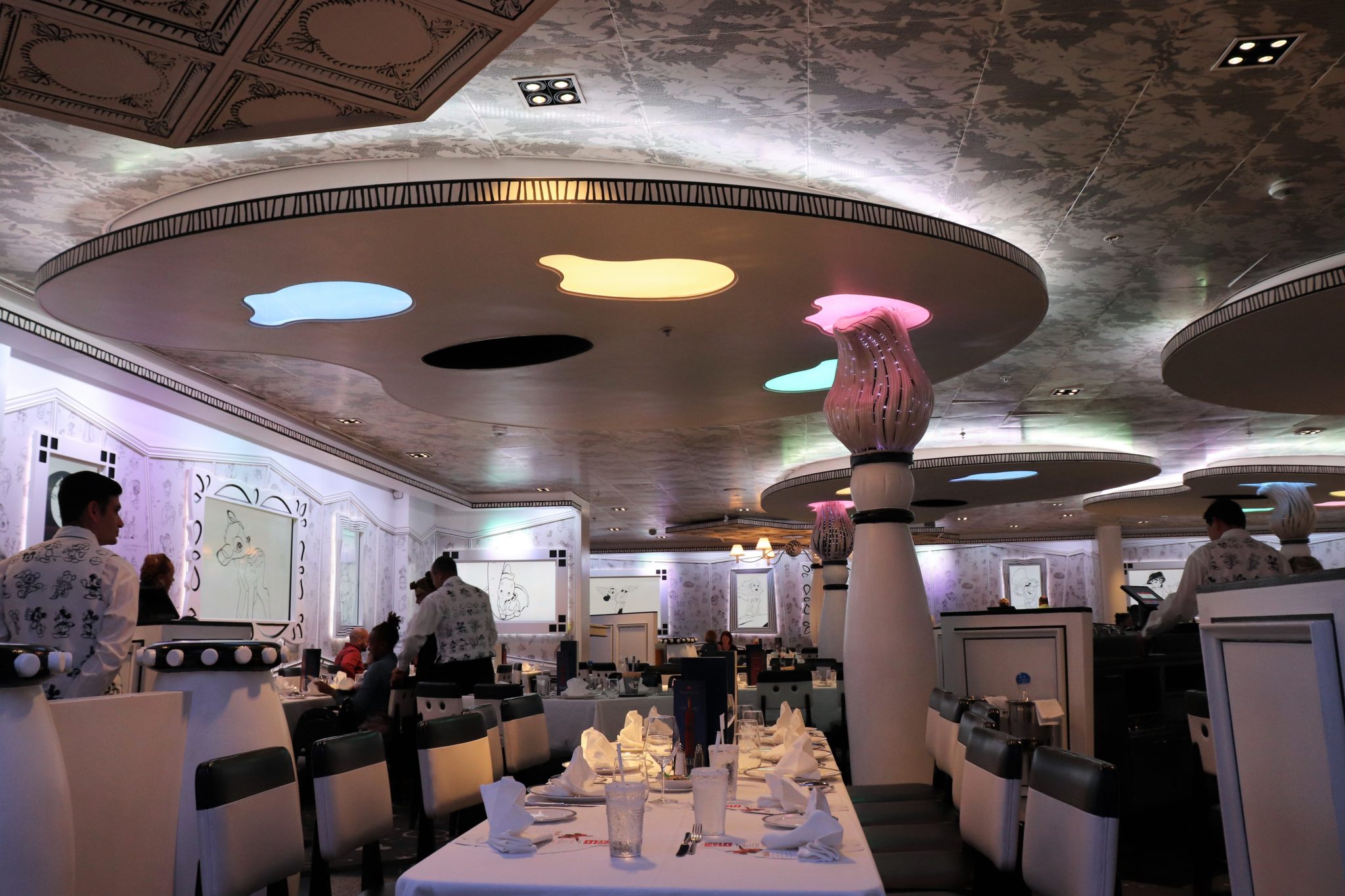 After the show we had dinner at Animator’s Palette.  This was a very fun restaurant. Every Disney ship has an Animator’s Palette, but each one has a different fun/interactive element to it, so if you haven’t been on the Magic I won’t say what happens here so as not to ruin the surprise!  But it was an entertaining dinner.  And the food here was very good too.  It may have been my favorite overall meal of the trip, not counting Palo which we paid extra for. My steak was excellent.  Our server, who sticks with you at every restaurant on your journey, was fantastic as well.  Thatree was sweet, funny, and so friendly. 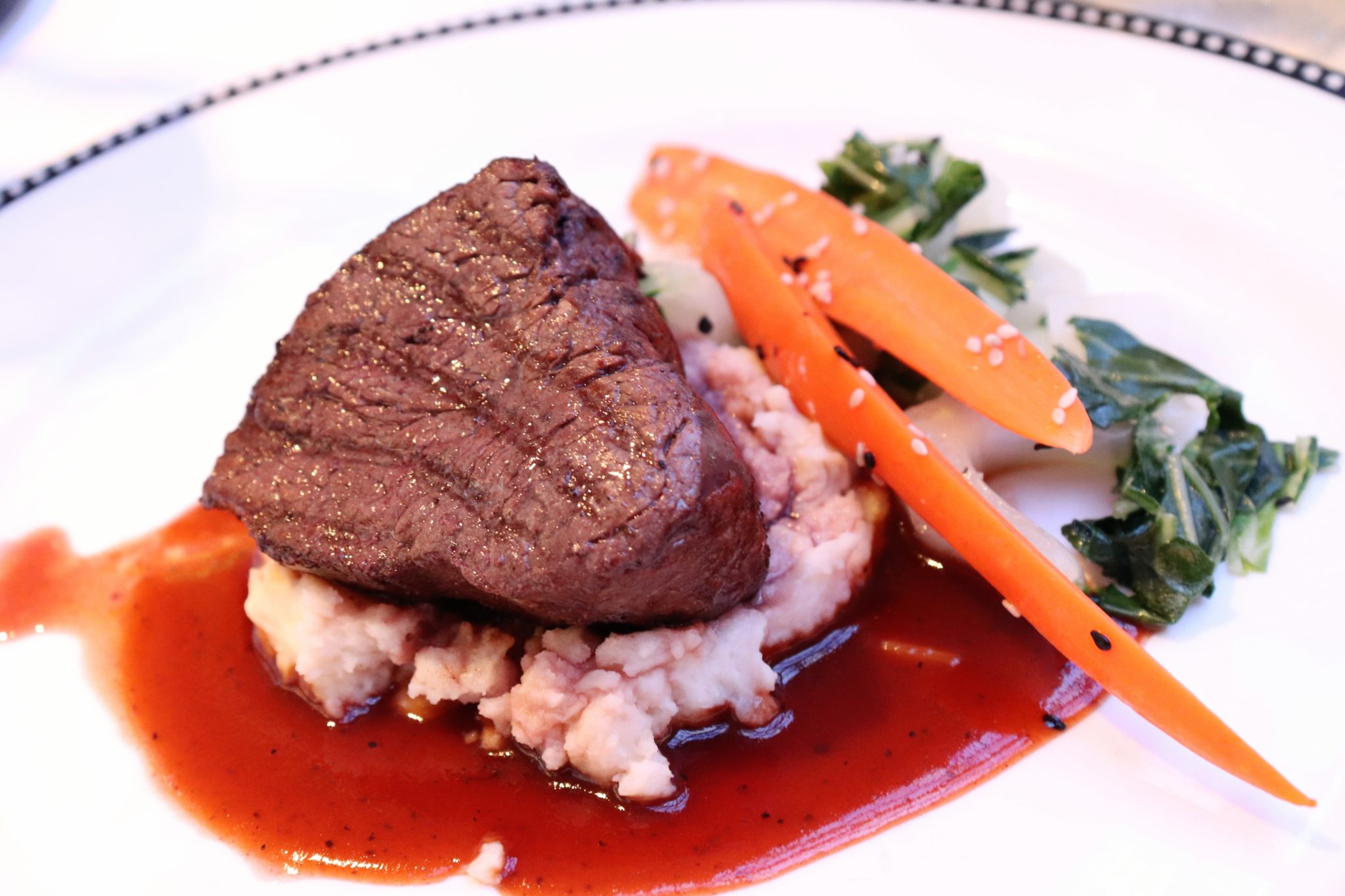 Once dinner was done we decided to go to Disney Tunes Trivia.  They played a bit of a Disney song on the piano and you had to name the song, what movie it was from, and then answer a trivia question related to the movie.  We ended up victorious, scoring 45 out of 46 points.  The only question we missed – what street do the children in Mary Poppins live on? I mistakenly put Cherry Lane instead of Cherry TREE Lane – definitely kicking myself over that one 😉 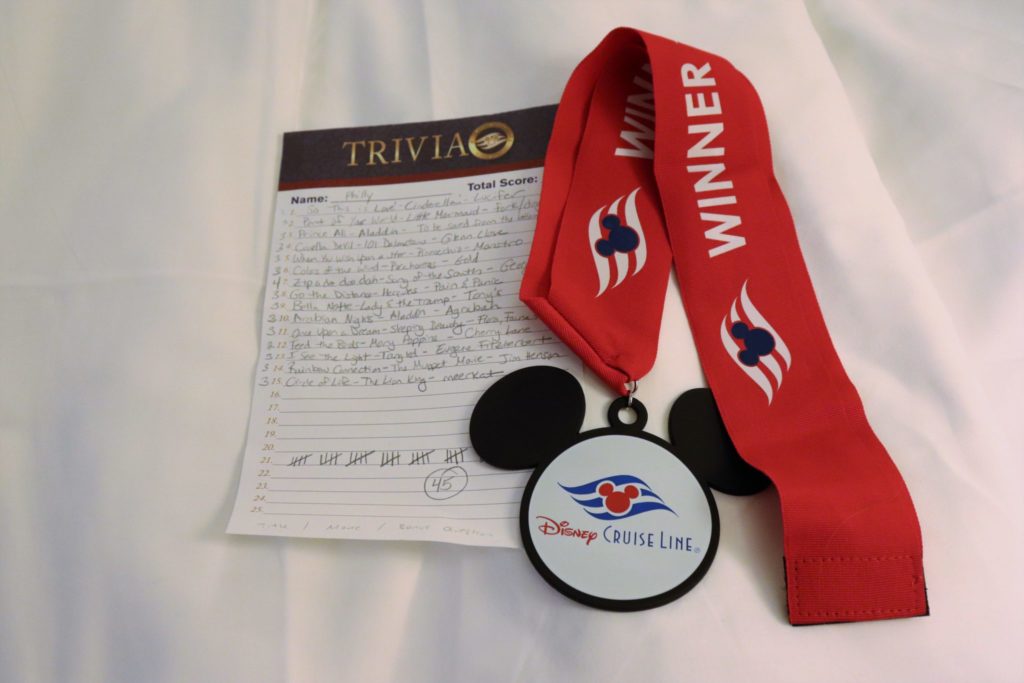 At this point it was around 11, and well, we were tired!  So it was back to the room and off to bed. We had to be up fairly early for our day in Key West the next morning!

What looks most exciting about the first day on the Disney Magic to you?