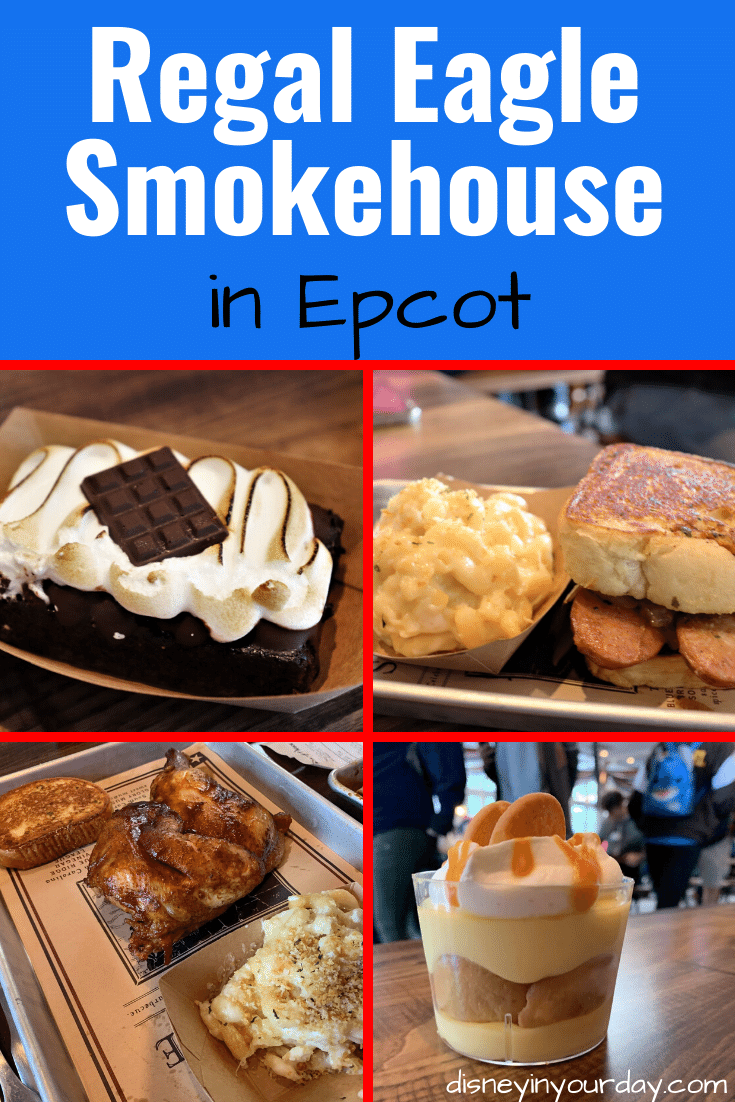 When I arrived in Disney World on February 20th and found out that Regal Eagle Smokehouse had just opened in Epcot that day (not announced in advance!), of course I had to check it out. I managed to get there for lunch the next day to try some of the yummy barbecue food. 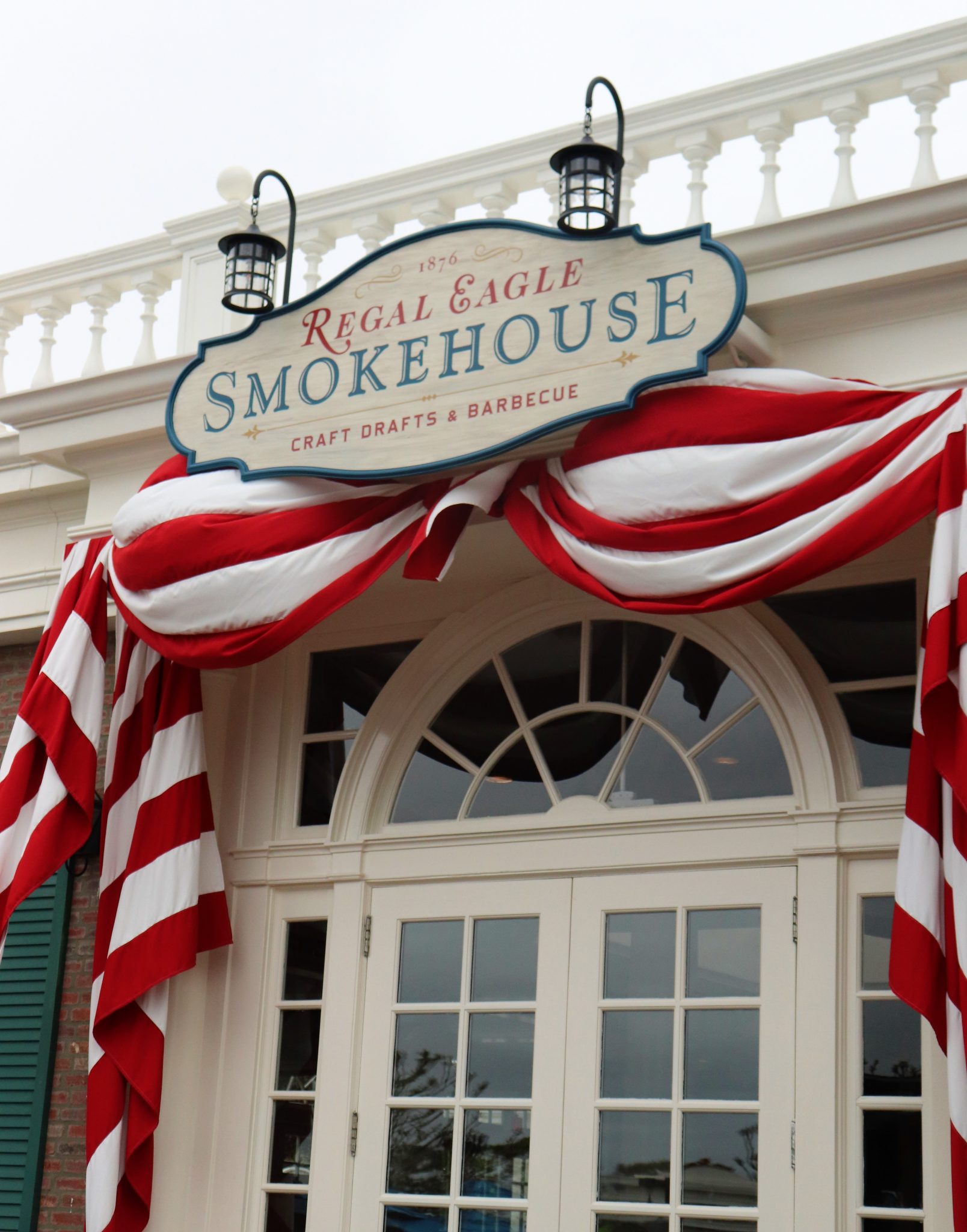 This new quick service restaurant is located in the American Adventure pavilion, and it replaces the Liberty Inn which was previously there. The focus is on BBQ and craft beers, but it also has a subtle Muppets theme! The “Regal Eagle” in the title is none other than Sam the Eagle. There are also some “official competition” posters around the place honoring various Muppets who have won certain cook-off competitions. 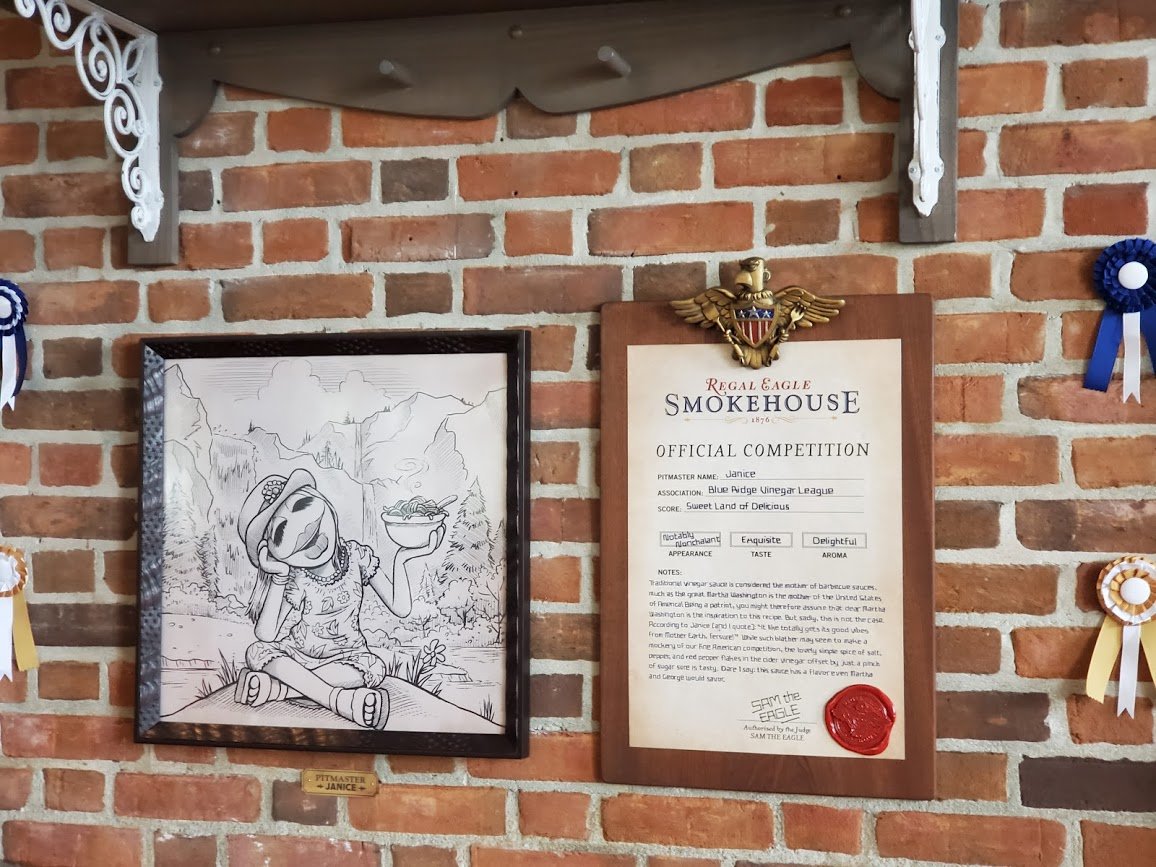 Of course being in the American pavilion and involving Sam the Eagle the restaurant has a very patriotic feel to it, with lots of red, white, and blue. There are also lots of other posters around mostly involving BBQ.

The wait to order/receive my food was quite long… I think it may have taken about half an hour total from the time I got there. Since it had just opened there could still be things they were working out behind the scenes (plus they may have had more people that normal because it was brand new). In addition mobile ordering was not working at this location so that was not an option. 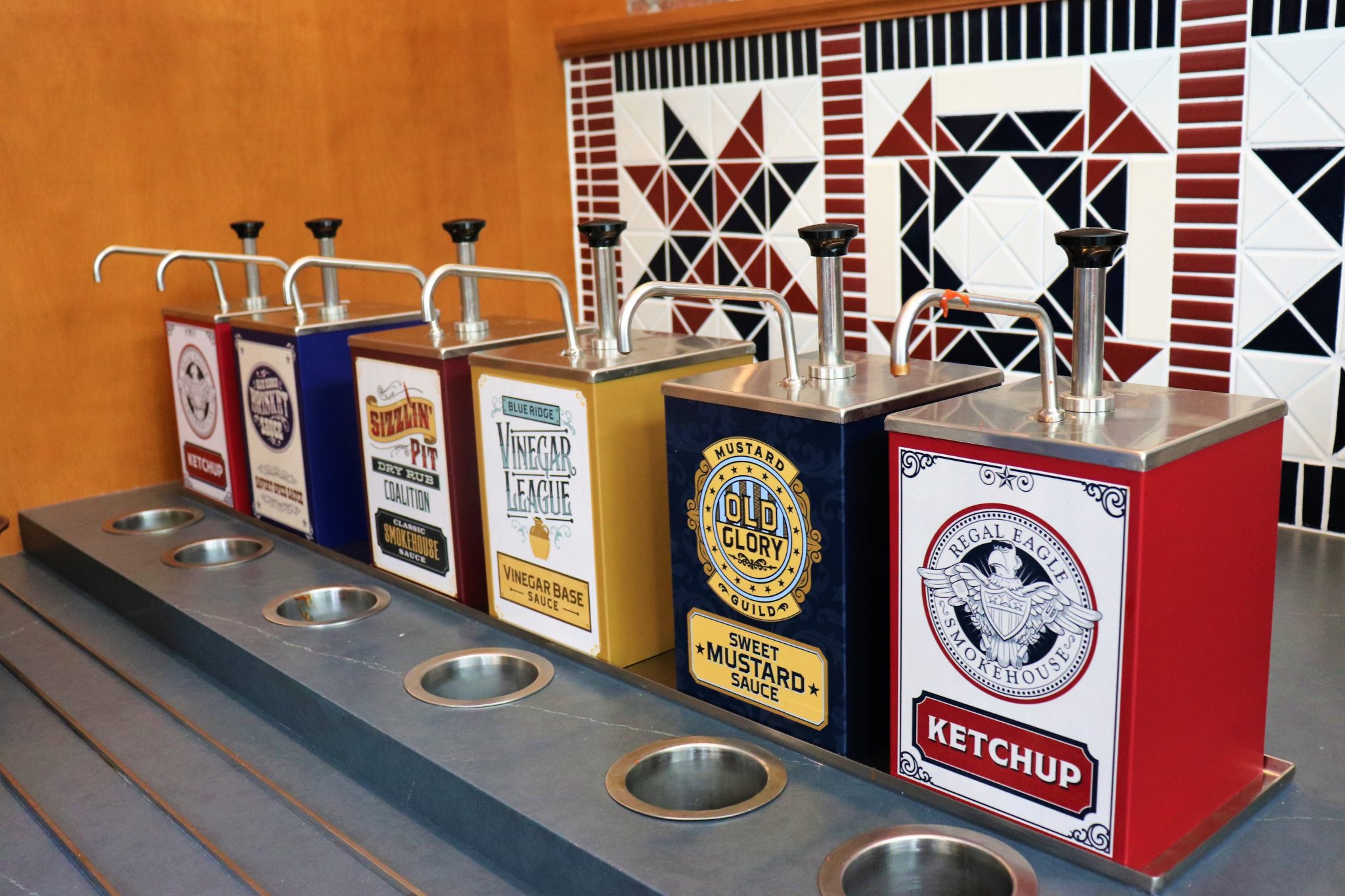 One thing to note is that even though they advertise craft beers as being a big part of their menu, the majority of craft beers is actually at the stand just outside of the restaurant. Once you get inside where you order the food there is a much smaller selection. So if you’re interested I’d recommend checking the outside first and getting a drink there before getting your food. They also have two cocktails outside that aren’t available inside.

The one cocktail they do have inside is the one I ordered, the Tennessee Lemonade (Jack Daniel’s Tennessee Whiskey with Odwalla® Lemonade and Peach): 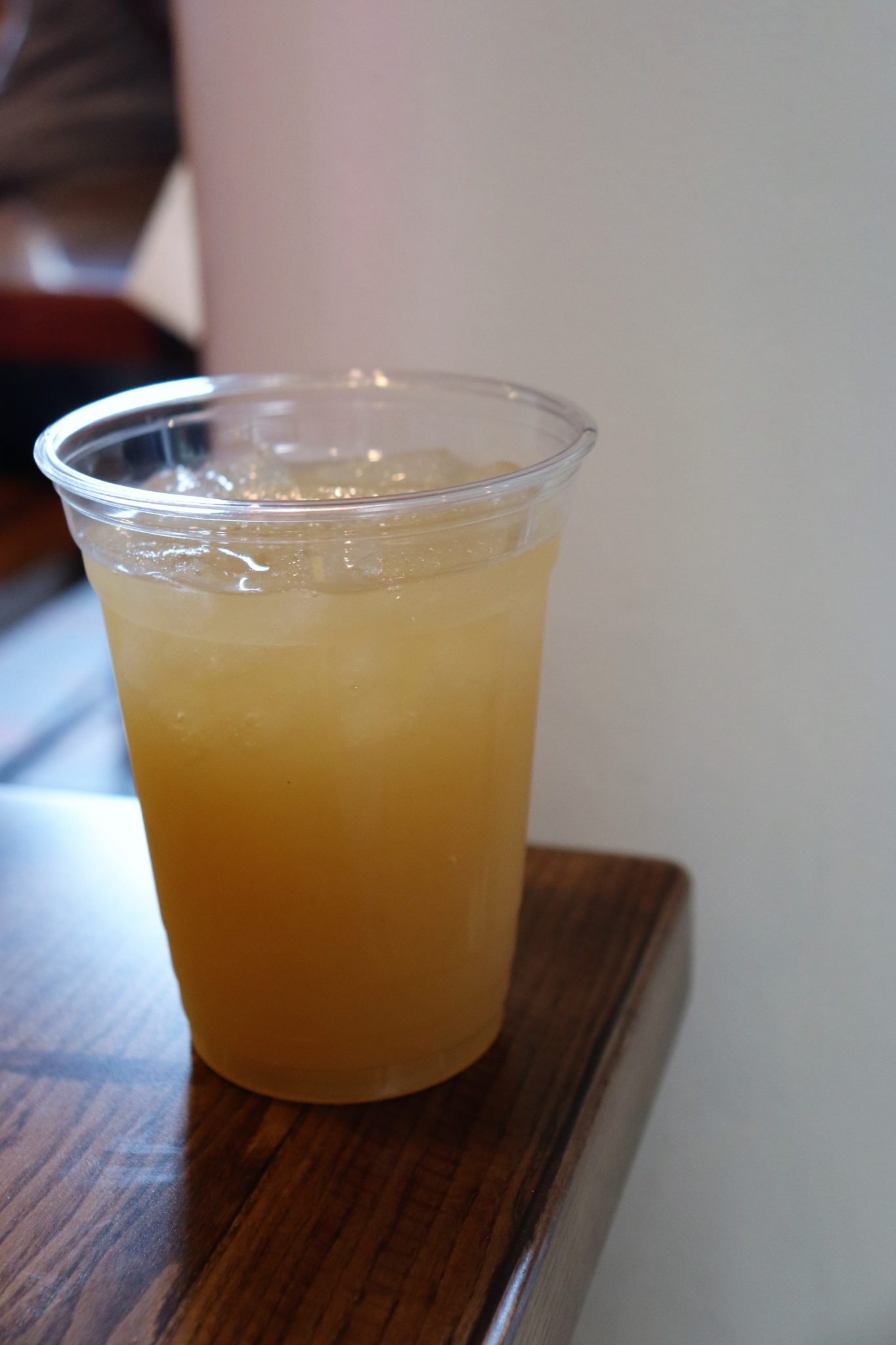 This was pretty light and refreshing – the whiskey taste wasn’t super strong but it was at least there. I’m more of a beer drinker so I’d probably go with that in the future, but this is a good mixed drink for people who prefer that.

One of the entrees we tried was the Sliced Texas Beef Brisket Sandwich (Rubbed with our secret Brisket Rub then Slow-smoked and smothered in Spicy Mop Sauce, and placed between Garlic Toast and served with your choice of side): 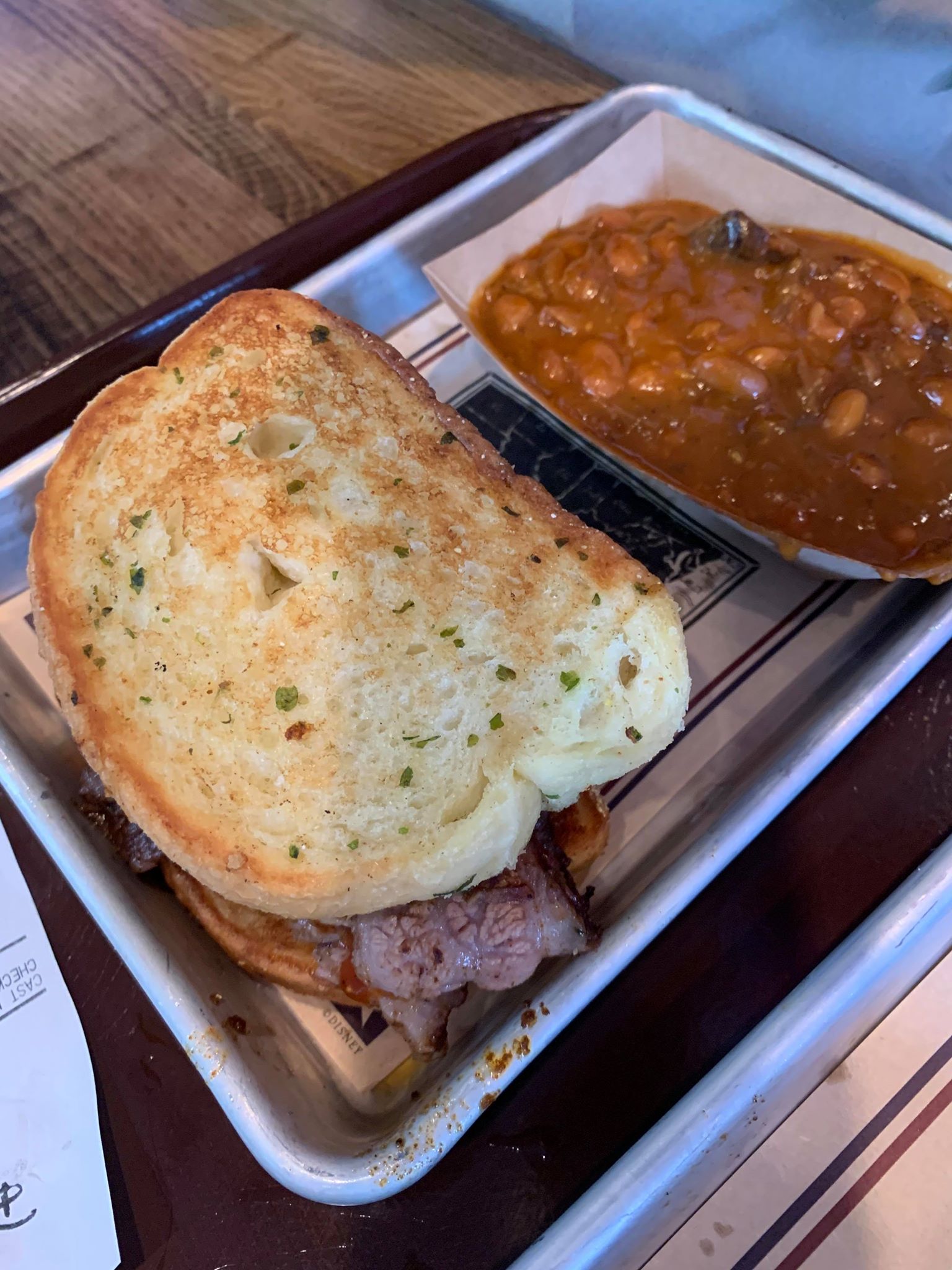 One of the people I was with ordered this and I heard it was very good. It looks great, and the garlic toast that comes with the sandwiches or as a side item is a true highlight here. You also get a choice of what side you want which is nice – the choices are onion rings, coleslaw, mac and cheese, french fries, baked beans, garlic toast, and house made pickles.

My friend got the Kansas City Smoked Half Chicken (Slow-smoked Half-Chicken smothered with our Sweet BBQ Sauce served with your choice of side): 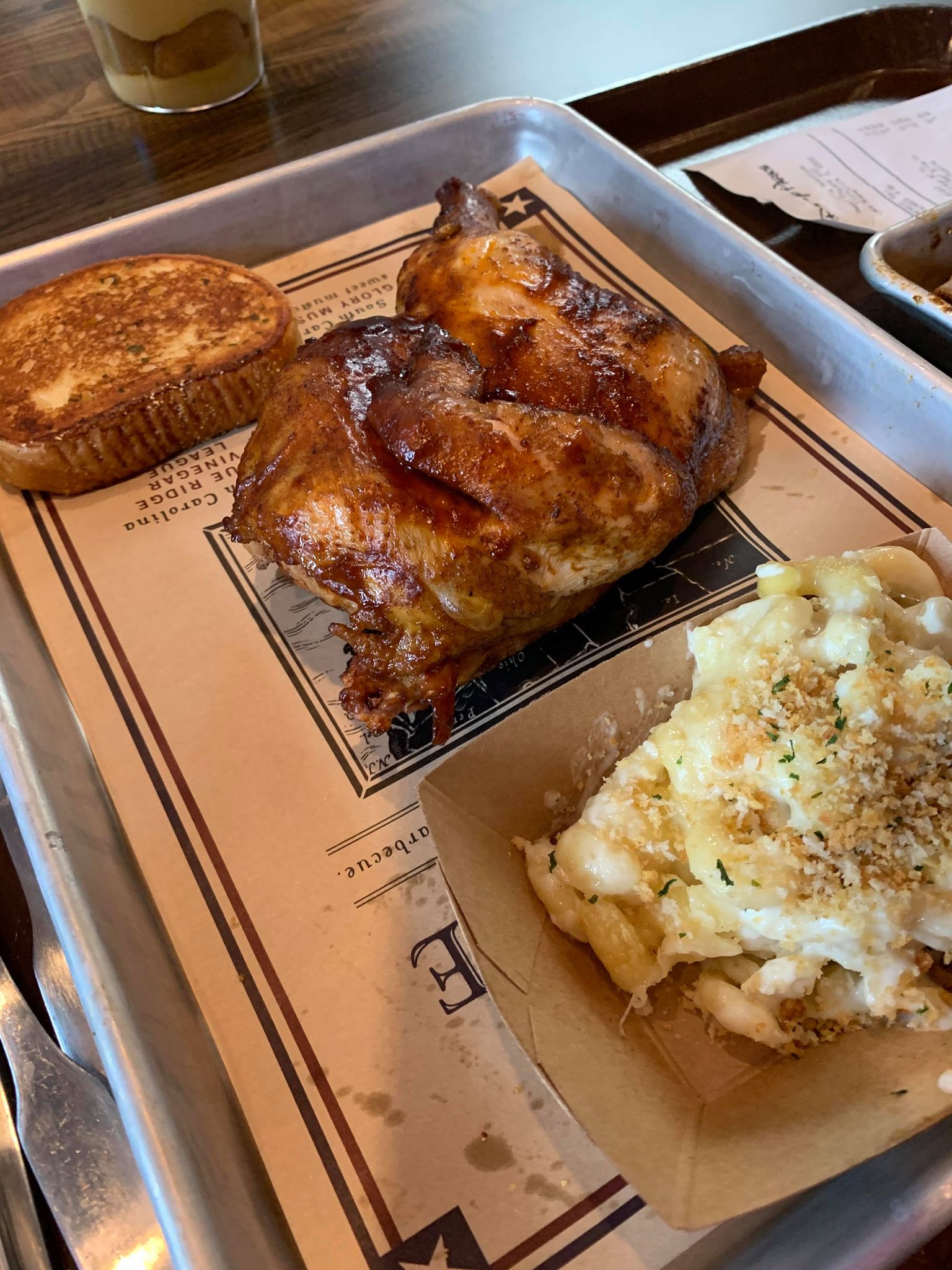 This is a nice sized piece of chicken that was very tender and well seasoned. It also comes with a side of that delicious garlic bread and your choice of side – can’t go wrong with mac and cheese! This mac and cheese was very tasty. Nice and cheesy with some breadcrumbs for texture.

For my meal I had the South Carolina Smoked Sausage Sandwich (Smoked Sausage on Garlic Toast topped with our Tangy Mustard Sauce and Caramelized Onions served with your choice of side): 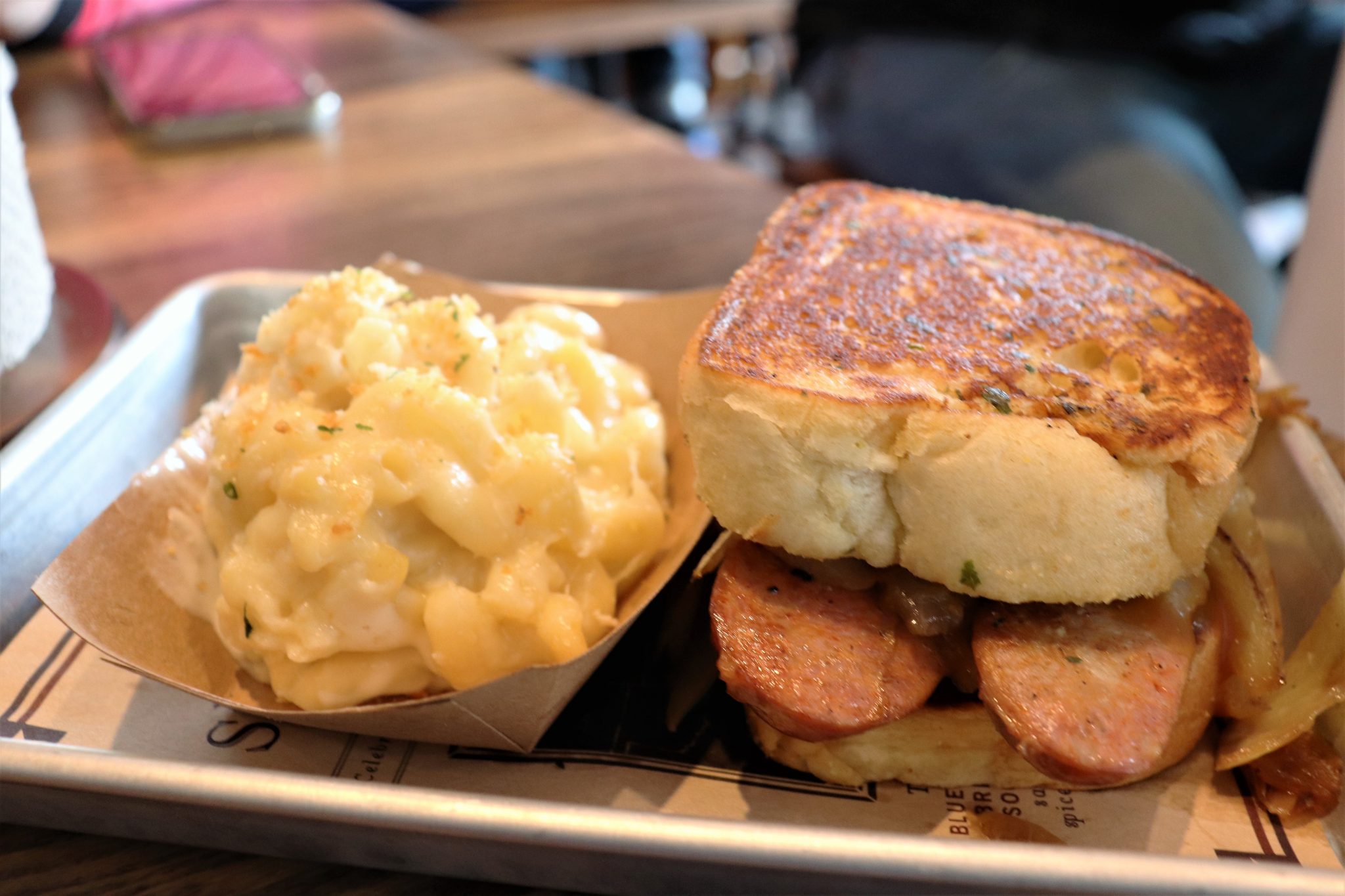 The sausage here was good, but the highlights of this sandwich was definitely the garlic toast and the tangy mustard sauce. The bread completely makes the sandwich and the buttery garlic toast contrasted nicely with the tangy mustard. There were a TON of caramelized onions on this, so I ended up removing a lot of them because I found it to be a bit overpowering.

Let’s not forget desserts! I couldn’t resist the S’mores brownie:

I’m a sucker for anything s’mores, so I really enjoyed this. The brownie was soft and rich with a nice dark chocolate. There was a bit of chocolate icing on top and then the marshmallow topping which paired well with everything. Definitely can’t go wrong with the one.

My friend tried the other dessert, the Banana Pudding: 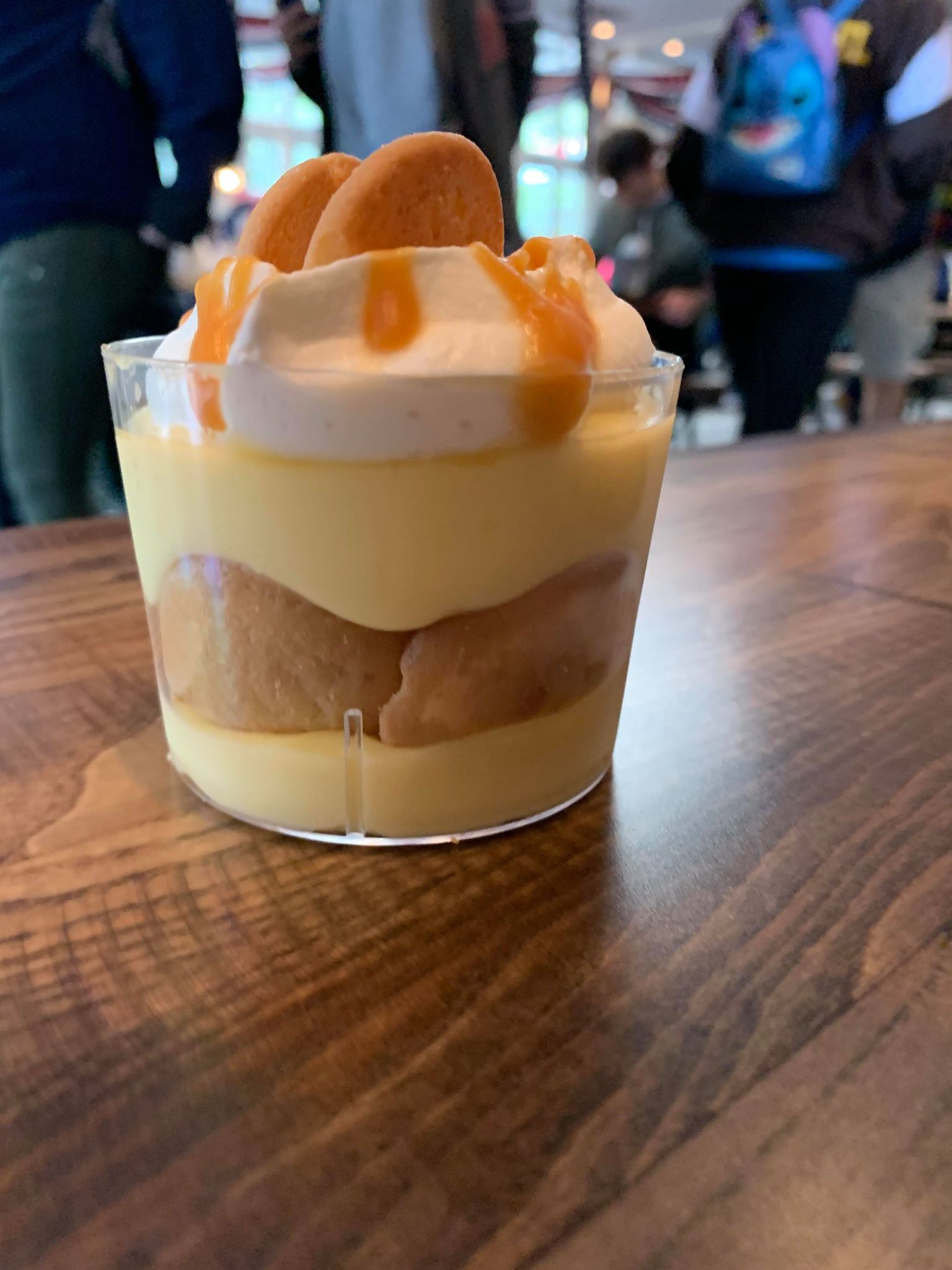 This was a big hit and she said it reminded her of her childhood. It not only has the banana pudding, it has Nilla Wafers mixed in too.

Overall I think Regal Eagle Smokehouse is a great addition to Epcot’s World Showcase! It’s nice to have some different options in terms of food. You can get hamburgers and chicken fingers lots of places, but barbecue is something that we don’t have too much of in Disney. The sandwiches with the garlic toast are definitely a highlight and I recommend trying them!

Will you be visiting Regal Eagle Smokehouse? What will you be trying?