You are here: Home / Uncategorized / Rapunzel’s Royal Table on the Disney Magic

The main restaurant I was most excited about on the Disney Magic was Rapunzel’s Royal Table! A new restaurant, it was just redone with a Tangled theme (and because Rapunzel is so excited about her birthday, it’s a birthday celebration too!). On our cruise we got the chance to dine here after our day on Key West. 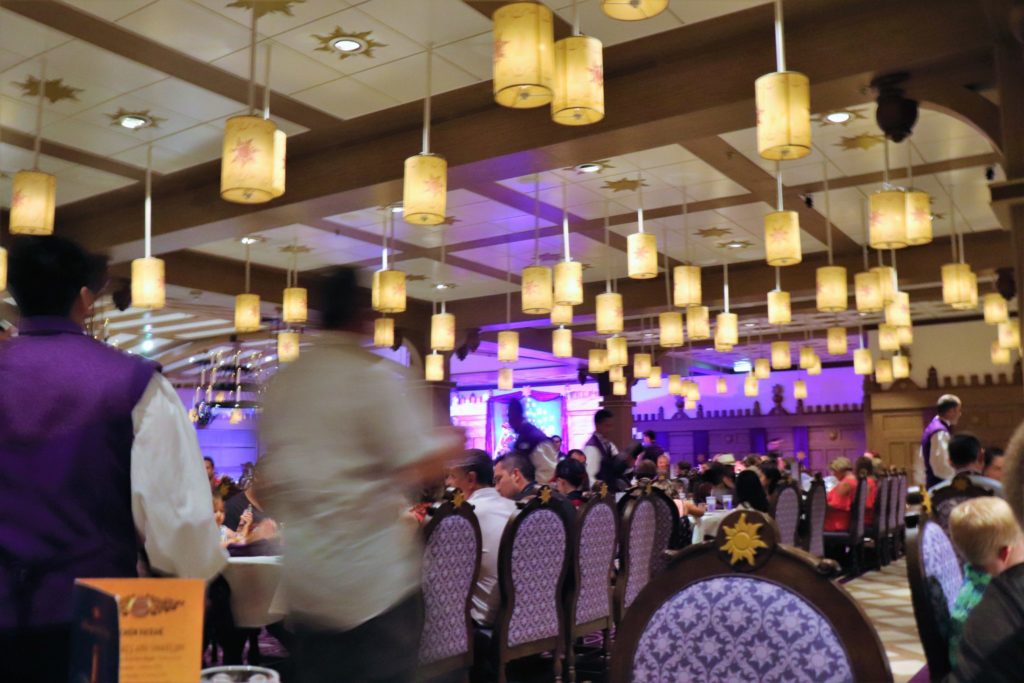 If you’re a fan of the movie you’re going to feel totally enchanted in this restaurant. The themeing is well done. The upholstery is purple and her sun logo is everywhere. And of course there are lanterns hanging from the ceilings, plenty of them! 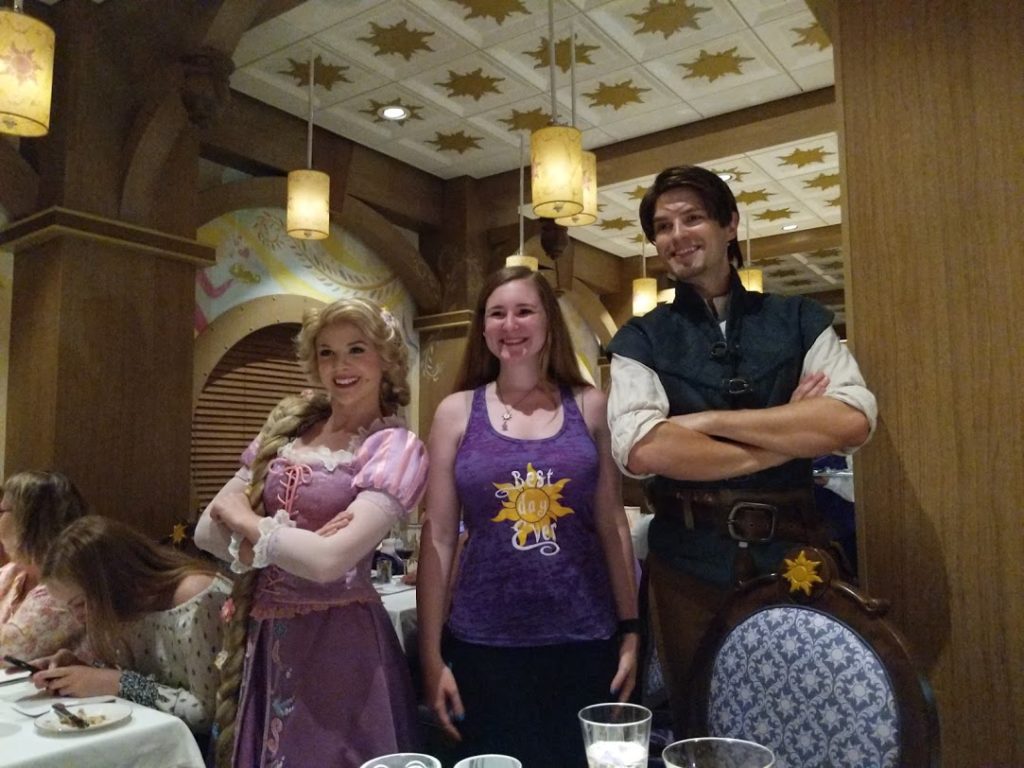 It’s not just a meal, it’s a bit of a show too. They sing a bit (including singing Happy Birthday to everyone celebrating), do a couple of dialogue interactions, and then come around for character meet and greets. Rapunzel and Flynn Rider stop by all of the tables. There are also several thugs wandering around who will come over as well. They are very funny and we had a pretty great interaction with one when we told him that it was Jason’s birthday and he had been in the bathroom when they sang to everyone. This thug volunteered to sing for Jason himself! 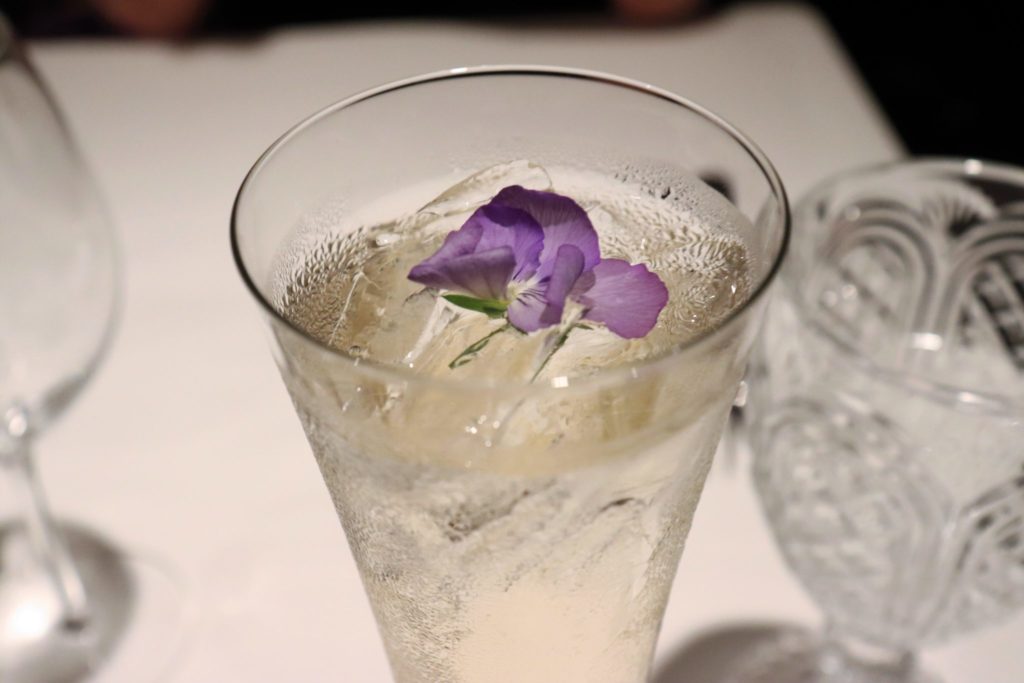 There are two specialty drinks here – the Floating Lantern (Belvedere Mango Passion / Moët Ice) and the Smolder (Bellini / Limoncello / Pineapple Cotton Candy / St. Germain).  I ordered one, and a friend of ours ordered the other. He didn’t really like his so I ended up drinking them both!  I thought they were both pleasant, though neither were my absolute favorites from the cruise. We also started with pretzel bread and a mustard dip. 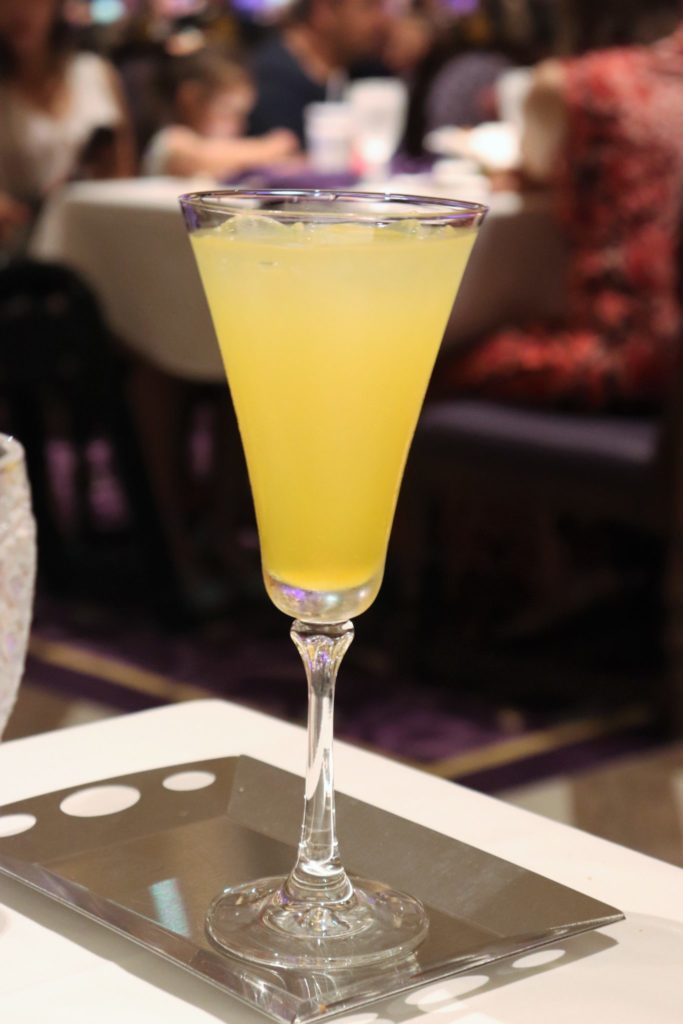 For an appetizer Jason went with the Snuggly Duckling Platter (A selection of Charcuterie with Pumpernickel and German Mustard): 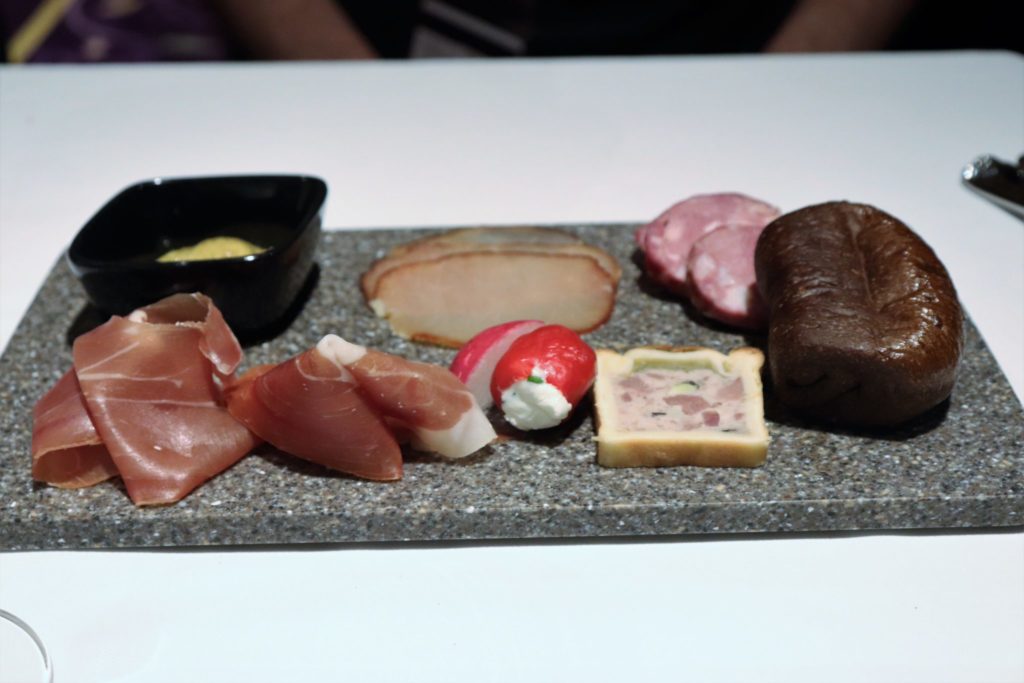 Jason had a little too much fun at the mixology that afternoon so unfortunately he doesn’t remember much about what he ate! It looks tasty though, right?

I had the Crisp Isle of Corona Shrimp (With pea puree, fried potato, pancetta, and pea shoots served with a lemon-tarragon caper mayonnaise): 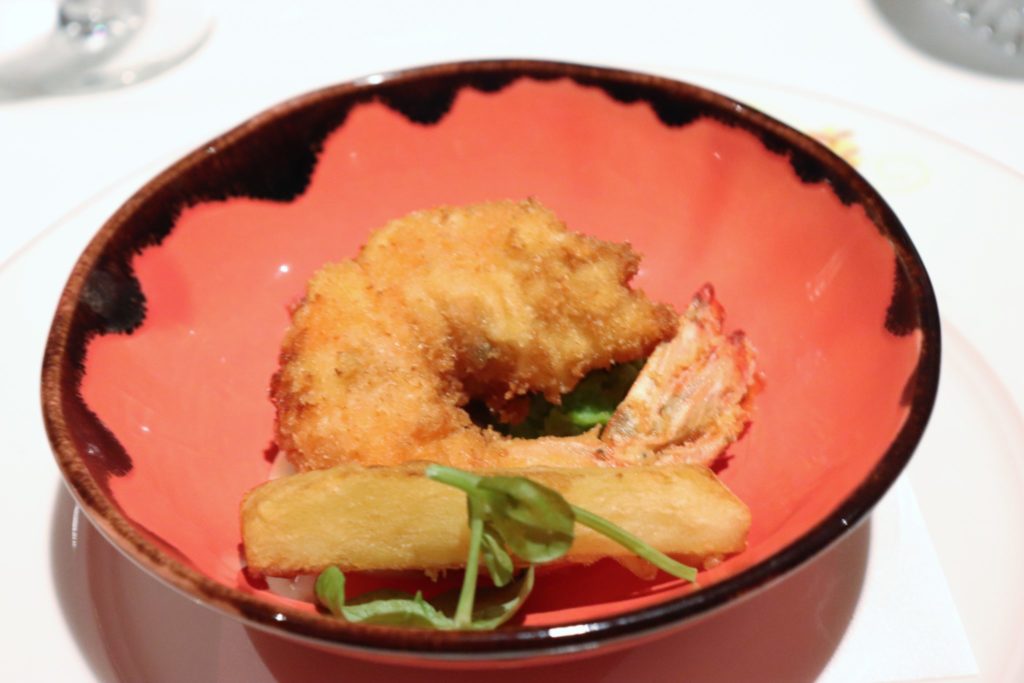 Yum. This was really good. It was only one shrimp (I could have used at least two!) but it was a big one and the accompaniments worked really well with it.

For a soup course I tried the Green Asparagus and Broccoli Soup (with buttered croutons): 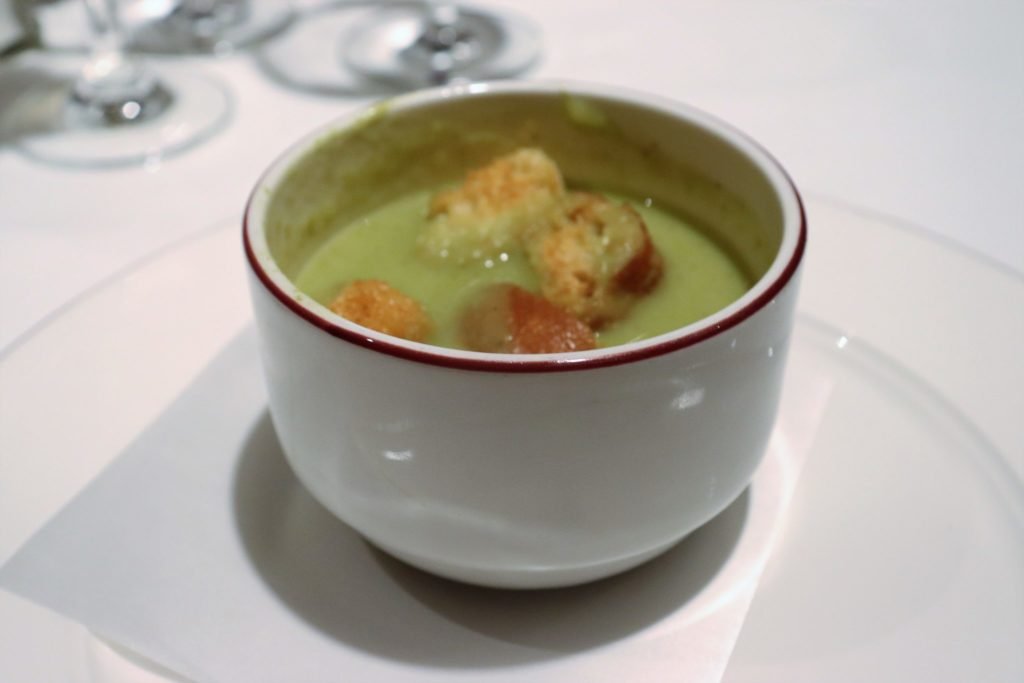 This is a bit different than other things I’ve had before, but it wasn’t bad. I don’t know if I would order it again because it’s not necessarily my favorite flavors, but I’m glad I tried it.

Our friend had the Romaine Wedge and “Hot” smoked Salmon Salad (with raspberries, candied pecans, and brie cheese served with creamy lemon-parsley dressing): 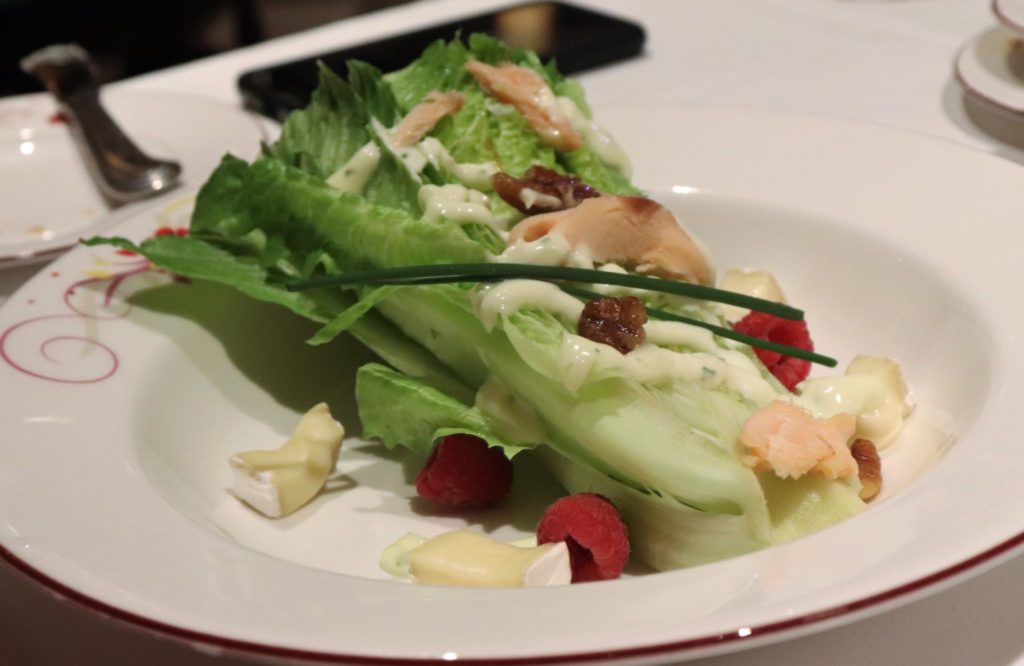 On to the main courses! Jason had the Oktoberfest Lemon and Thyme Roasted Chicken (with fondant potato, buttered kale, baby turnips, romanesco, and a red wine-chicken jus): 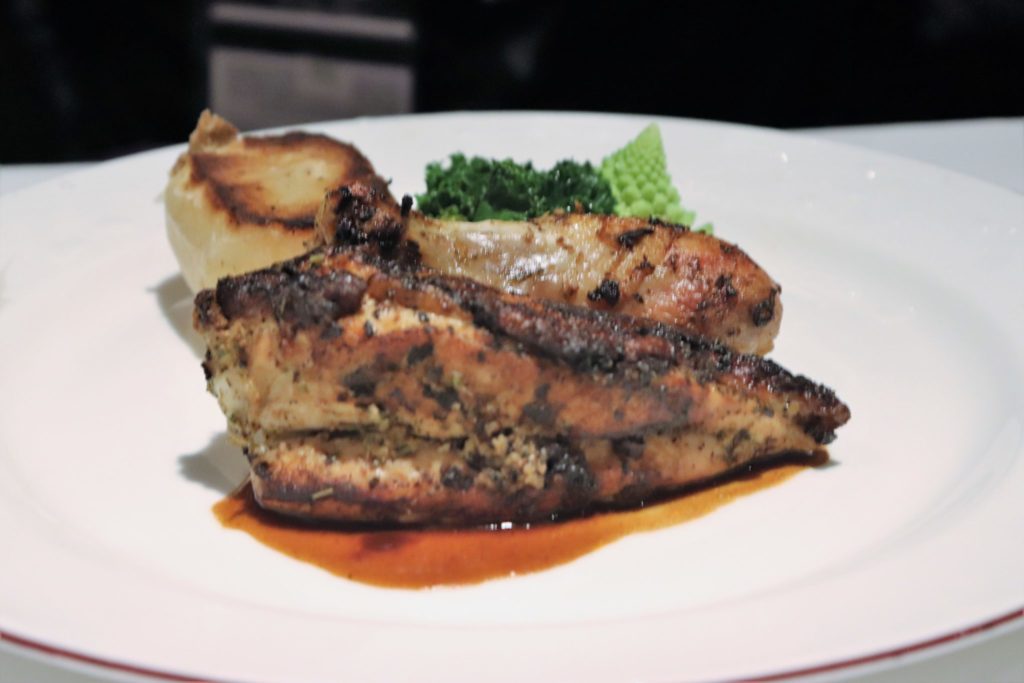 When we went to Germany two years ago we got to attend Oktoberfest and Jason still talks about how amazing the chicken was there. So of course when he saw Oktoberfest style chicken on a menu he had to order it, even though we knew it wouldn’t be as good as the original in Germany!  I think he liked it, though his comment now as we sit on the couch is “I had chicken on the cruise?”

Our friend went with the beef option here, which was the Captain of the Guards Roasted Prime Rib of Beef (with a double baked potato, broccoli, sweet roasted carrots, and a red wine veal sauce): 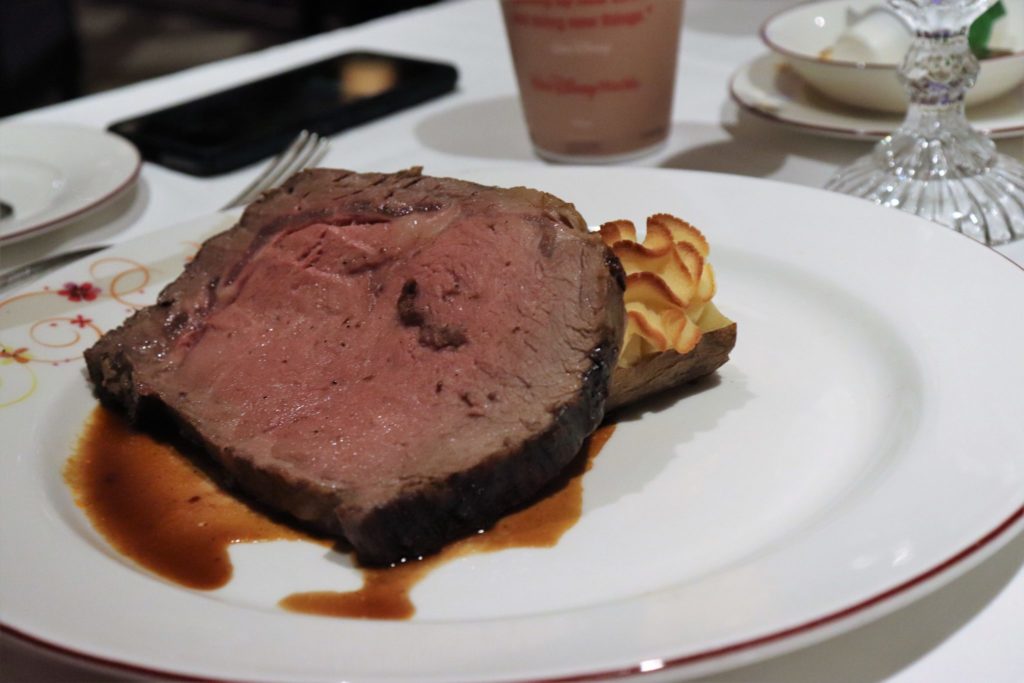 This was a really big piece of prime rib, and while some of it was fatty parts a lot of it was really good quality beef.  I think only those with the hugest of appetites would be able to eat this whole thing in addition to the starters and desserts!

For my entree I went with the Tangled Pasta (angel hair pasta tossed in basil-pesto with carmelized sea scallops, roasted vine tomatoes, and a sun-dried tomato tapenade served with roasted Meyer lemon): 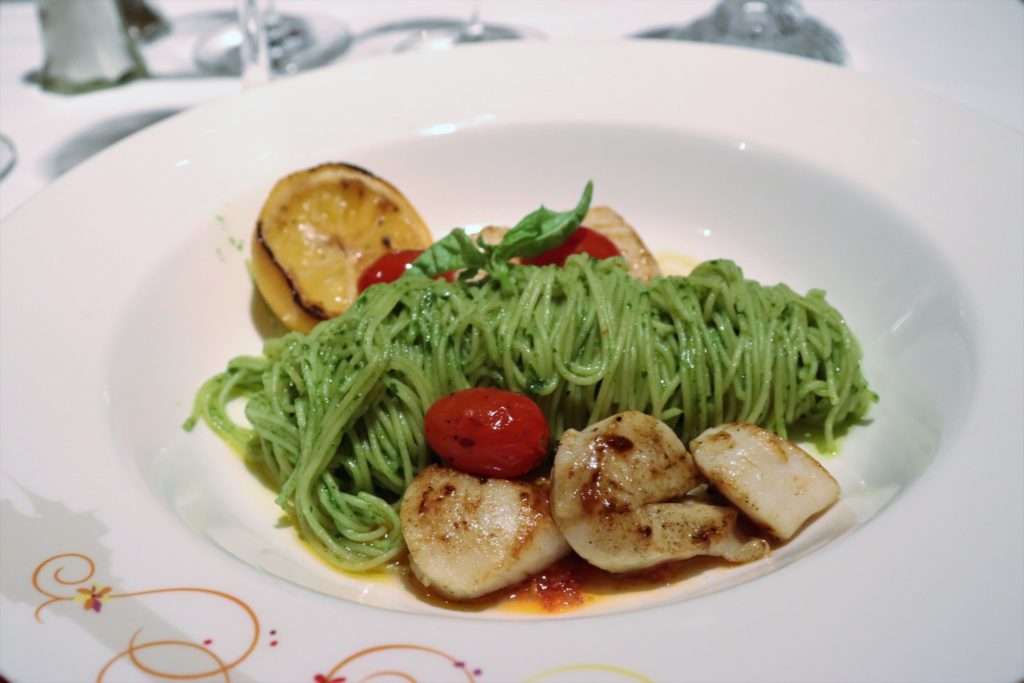 I think that aside from our signature brunch at Palo, this was the dinner I enjoyed the most out of any of the entrees I had at any of the restaurants.  The pesto sauce was delicious and fresh, and the scallops were really well cooked. This dish combines a lot of my favorite things (pasta and seafood) and I’m so glad it didn’t disappoint!

Desserts were also a highlight at Rapunzel’s Royal Table.  One of our friends had the Gothel Blackforest Tower (rich chocolate creme, cherry compote, and chocolate cake tower): 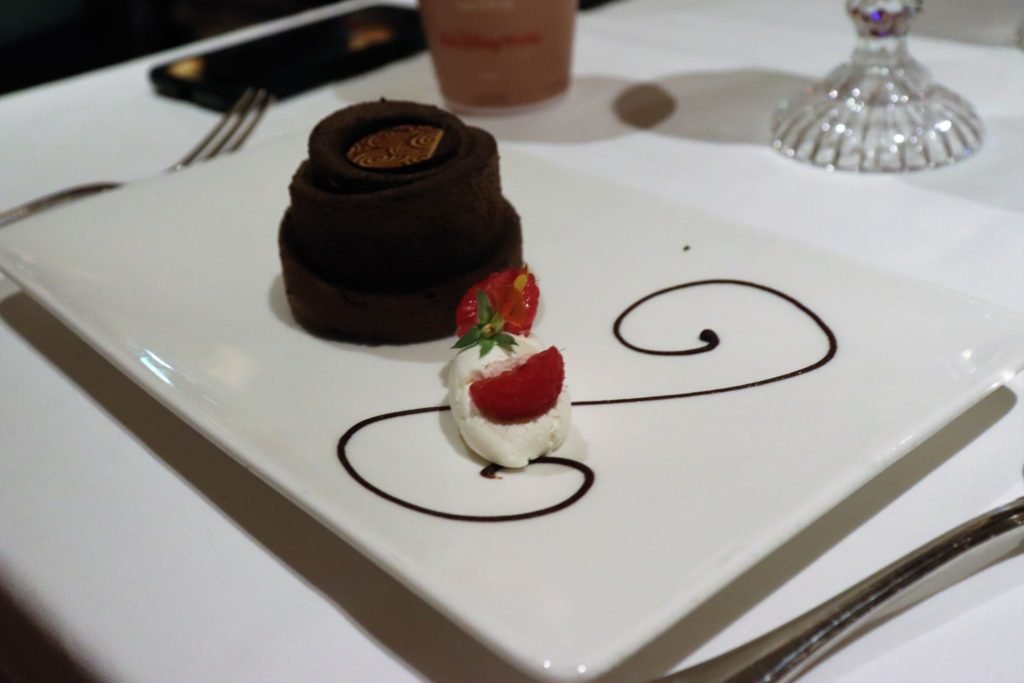 I know she really enjoyed this and kept talking about how good it was even later throughout the trip. I love how they even keep the desserts to the Rapunzel theme by making this look like a tower.

Her husband (who had eaten earlier and wasn’t hungry for dinner, but did join us for dessert) decided to try the Birthday Cupcake Sundae (butter cupcake with strawberry compote, birthday ice cream, whipped cream, and topped with celebration confetti): 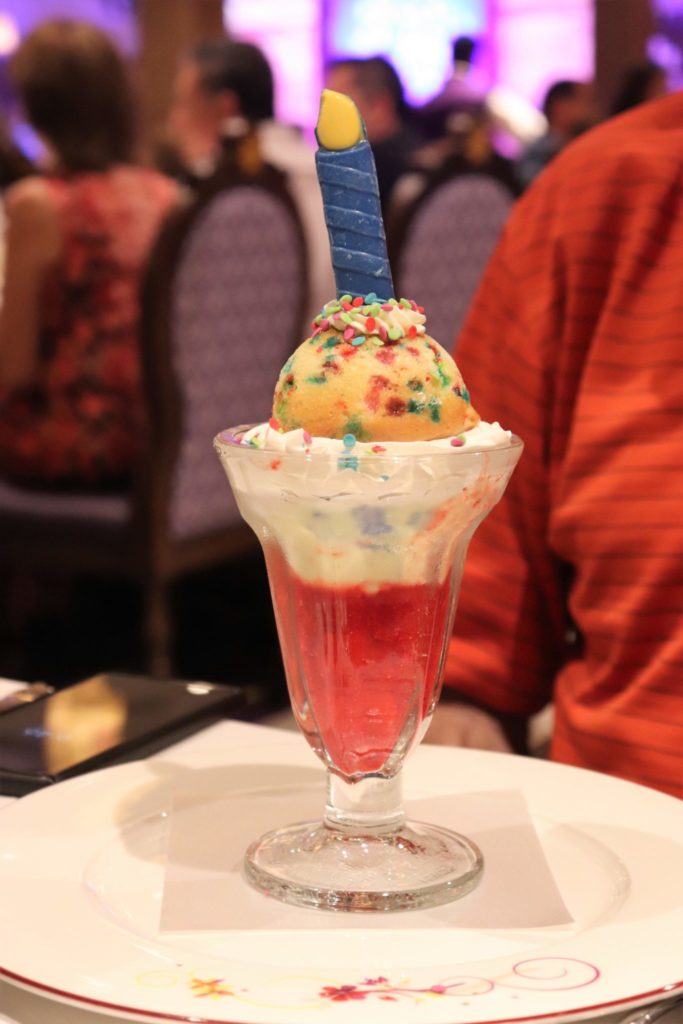 This is a pretty straight forward dessert, but one that I think both kids and adults would enjoy (I don’t know if it’s on the children’s menu as well, but they had their own options). You can’t go wrong with cupcakes and ice cream, and I think the strawberry compote adds a nice layer as well. 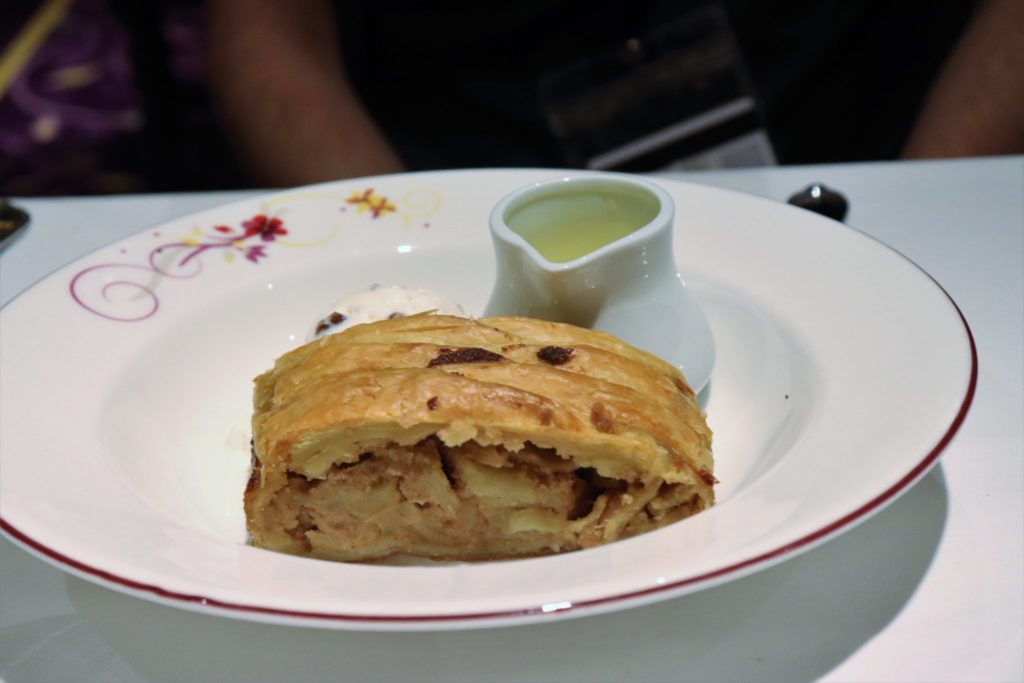 This is a very “Jason” dessert option and I think he was pleased with it. 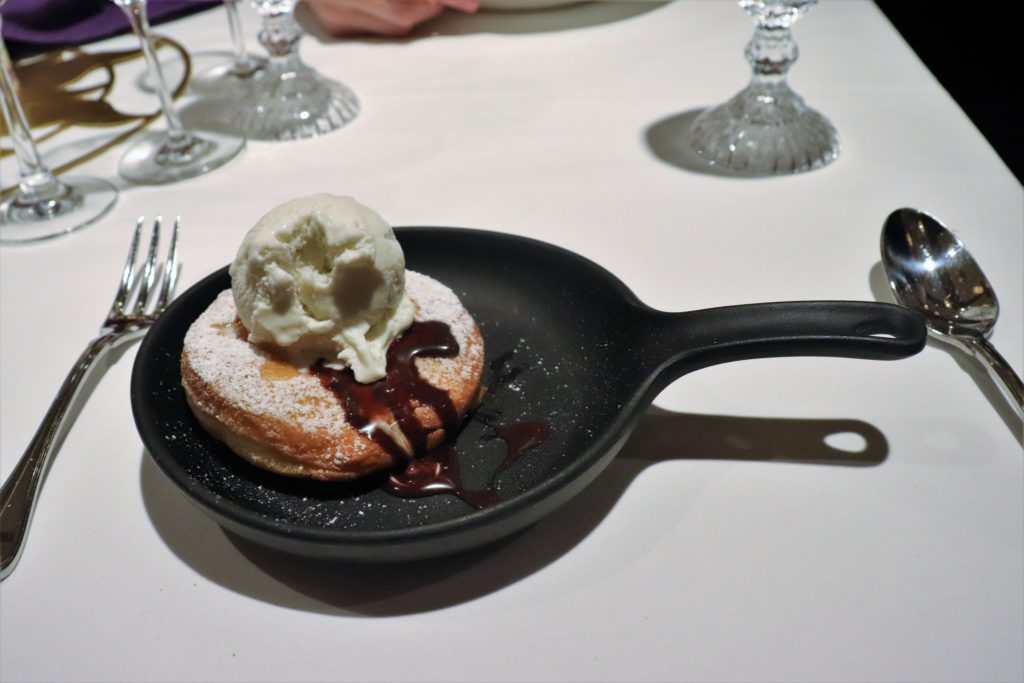 Another nice touch to the theme by serving this in a frying pan, this was a super tasty dessert.  The sweet bread tasted almost like a funnel cake or donut, and it came out warm and fresh. The vanilla ice cream is the perfect pairing to it.

Overall I think our night at Rapunzel’s Royal Table was probably the most satisfying meal of the trip in all aspects, at least for me. I was pleased with all of the courses I had, but especially my entree and dessert. The restaurant is decorated so well and the characters there are a lot of fun. While meeting Rapunzel and Flynn is nice, the real highlight is the thugs – they were hilarious!

Which dish at Rapunzel’s Royal Table looks best to you?