You are here: Home / Disney World / Princess half marathon recap 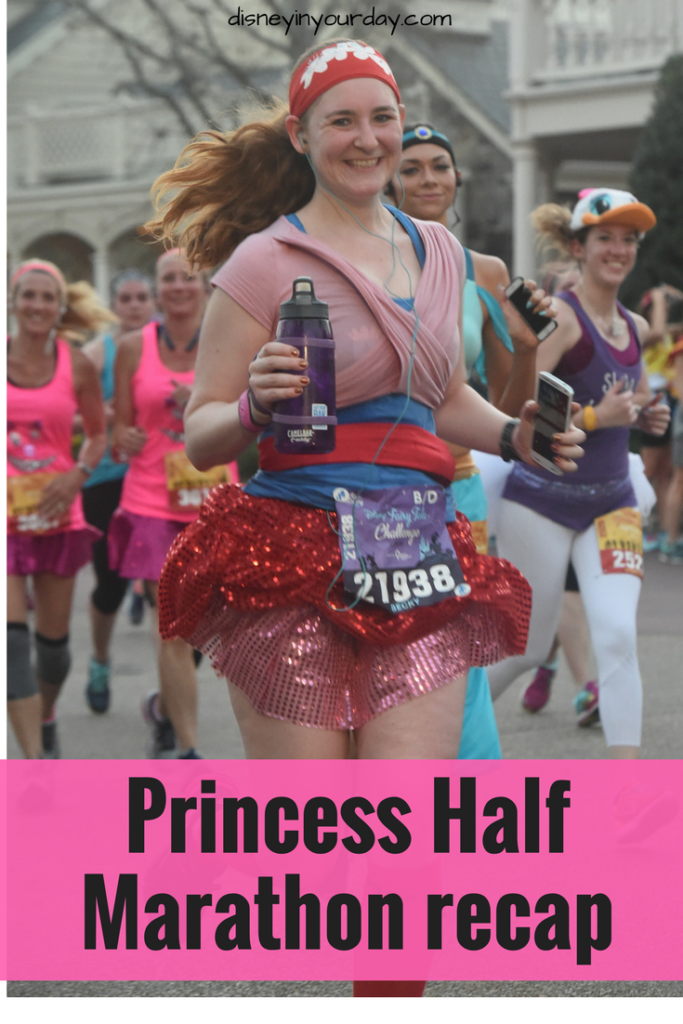 This was my fourth year running the Princess half marathon. Back in 2015 it marked my very first half marathon, and the beginning of a long relationship with running.  This was probably the most nervous I was for a half since that first one, since it was my first big race since my injury and physical therapy. When I did the Hershey half marathon in November I was in SO much pain.  I invested so much time, money, and energy into physical therapy and I was really hoping it would pay off.

And I won’t keep you in suspense for this recap – it did. I wasn’t completely pain free (my back is having a rough time) but it was so much better than it had been. And I was still able to walk around the parks during the next couple of days.

A race at Disney means early mornings, and we were up at 2:45 in the morning. These are the sacrifices we make to run at Disney. I got on my Mulan costume that I had planned. Since we were staying at the Contemporary we were able to take the monorail to Epcot for the start of the race. The corrals are pretty far out from where they drop you off, we we walked over there first thing. We wanted to get into the corrals early because they’ve been releasing them in waves this year, which means the farther up you are in your corrals, the sooner you’ll be able to start. 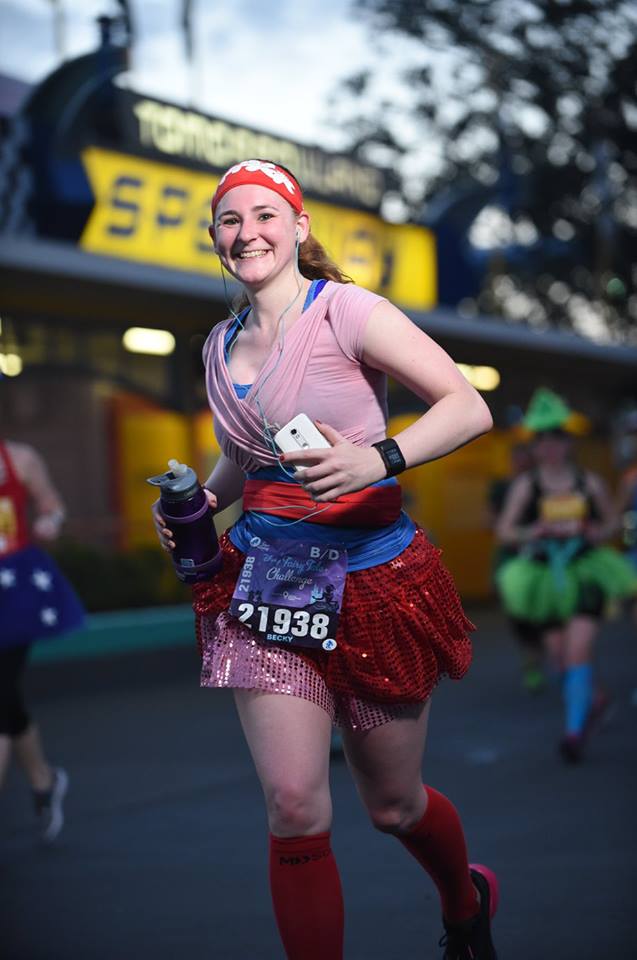 I was in corral D and got there around 4:30, so I was sitting around for over an hour.  Luckily the weather was nice so it was comfortable to wait, unlike other years when it’s been so cold and miserable that you’re counting every minute.  I started around 5:42am.

I felt good starting the half marathon. It was still cool, though the humidity kicked in quickly, by the time we got to mile 2 or so.  Jeff Galloway had shared some advice before the start, and he mentioned that you should slow down 30 seconds per mile for every 5 degrees it is above 60. So I tried to force myself to slow down.

Having done the race a number of times, it’s interesting to see many of the character stops are the same. I shared all of the ones I passed at the end of this post, but I was used to seeing the pirates, princes, witch, and Buzz Lightyear. So the first 4 or 5 miles of the race is not quite as exciting. 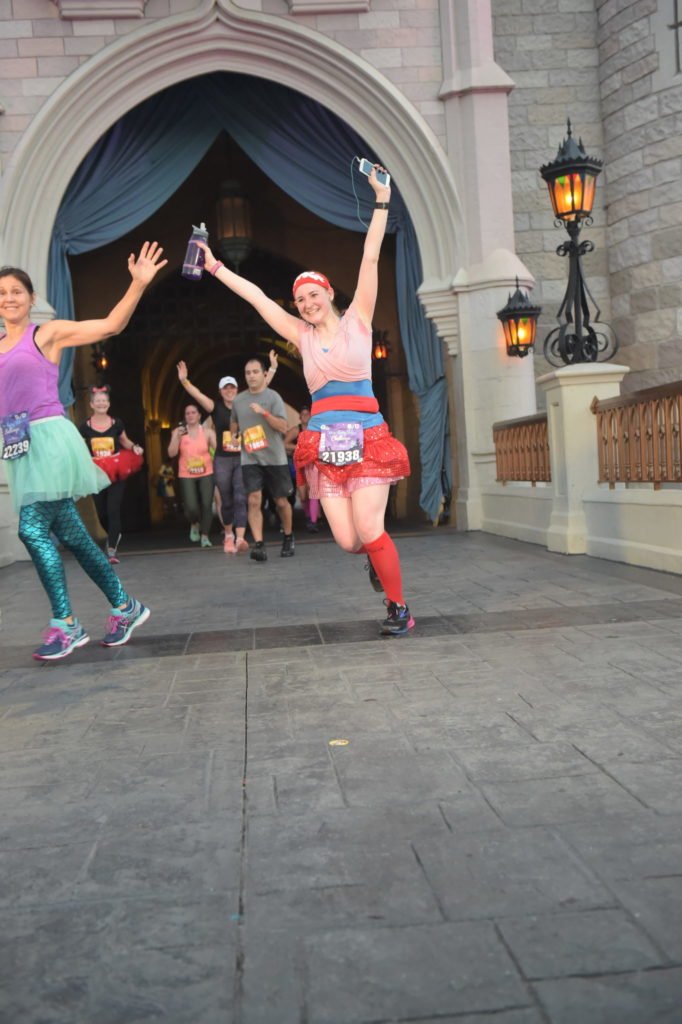 But then you get to Magic Kingdom and that is just always an awesome feeling. Instead of coming in a side entrance like in the past, this year we came right in the front gates and down Main Street, where my husband Jason was waiting! (as well as his brother Johnny, whose girlfriend was running, and our friend Vince, whose wife was also running).  It’s always great to see people cheering you on – and then to see the castle at the end of that stretch!

There is so much going on in Magic Kingdom. They pack a lot of characters into this area too, so there’s plenty of places to stop.  My mile 6 was about 18 minutes long (compared to my previous miles, which were about 11 minutes each).  I stopped for the Queen of Hearts and White Rabbit in Fantasyland, though unfortunately the White Rabbit had to step away before my photo so it was just with the Queen. 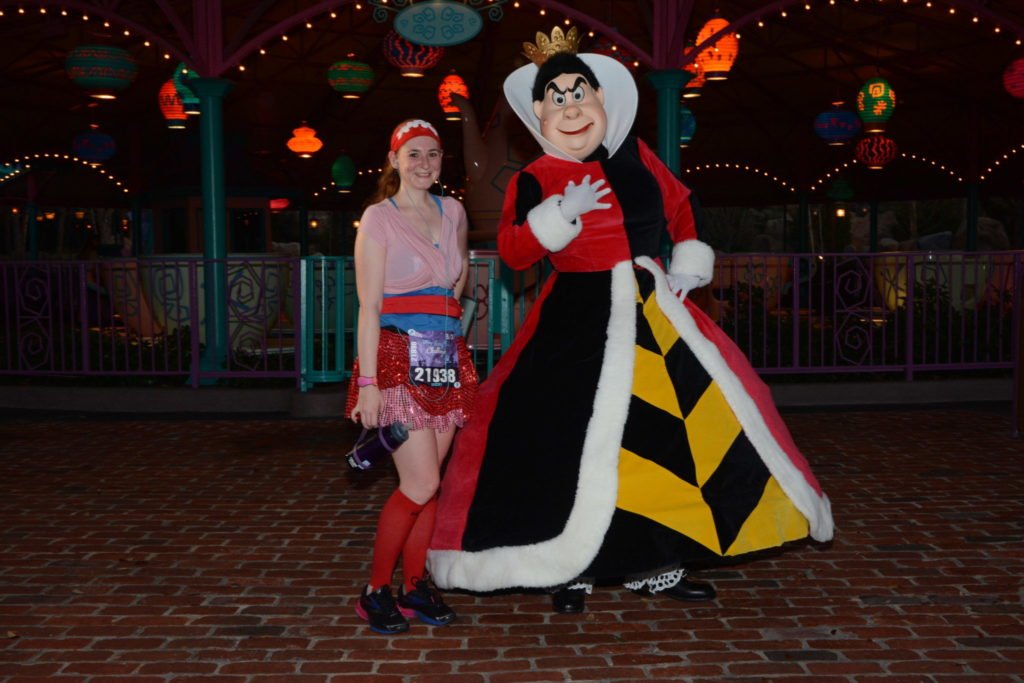 Running through the castle itself is fun, and then upon entering Liberty Square I saw Tiana and Naveen. She’s one of my favorite princesses and the line wasn’t bad so I decided to stop. And then Louis the alligator came out to join them, which was super exciting! So although I missed out on the White Rabbit, I did get Louis, which I think is even better. 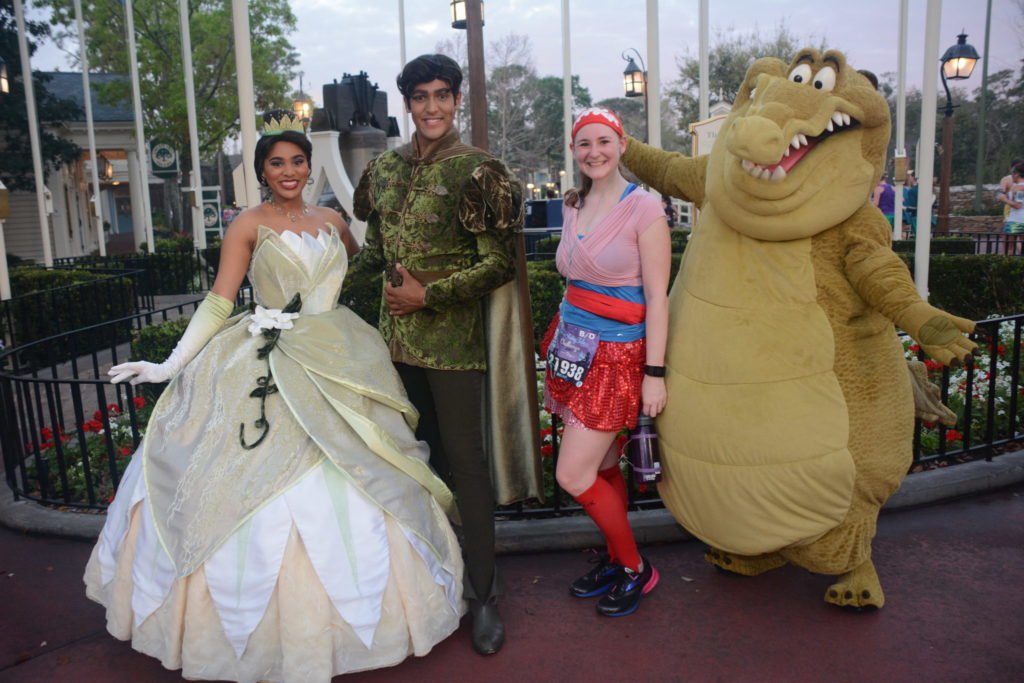 Then before you know it you’re out of Magic Kingdom, and things seem a little less magical. They’re still pretty good for a mile or two, as you’re backstage and they have a number of character stops up past the Grand Floridian. But once you reach the resort area… this is the stretch of boredom.  Early on there was a group of characters from the Adventurers Club – there was no wait for a photo so I had to stop for one. I never got to experience the now extinct Adventurers Club, but it sounds like it was awesome. And this photo was for my friend Kristin, who was a huge fan of that location.

Then plowing on through miles 9, 10, 11. Even when there aren’t character stops they do try to add things to make it a little more interesting. There was a series of signs with princess jokes on them (horrible puns, really), the mile 10 mile marker was decorated for the 10th anniversary, and the green army man from Toy Story “encourages” you as you go up the hill (often by making people do push ups). 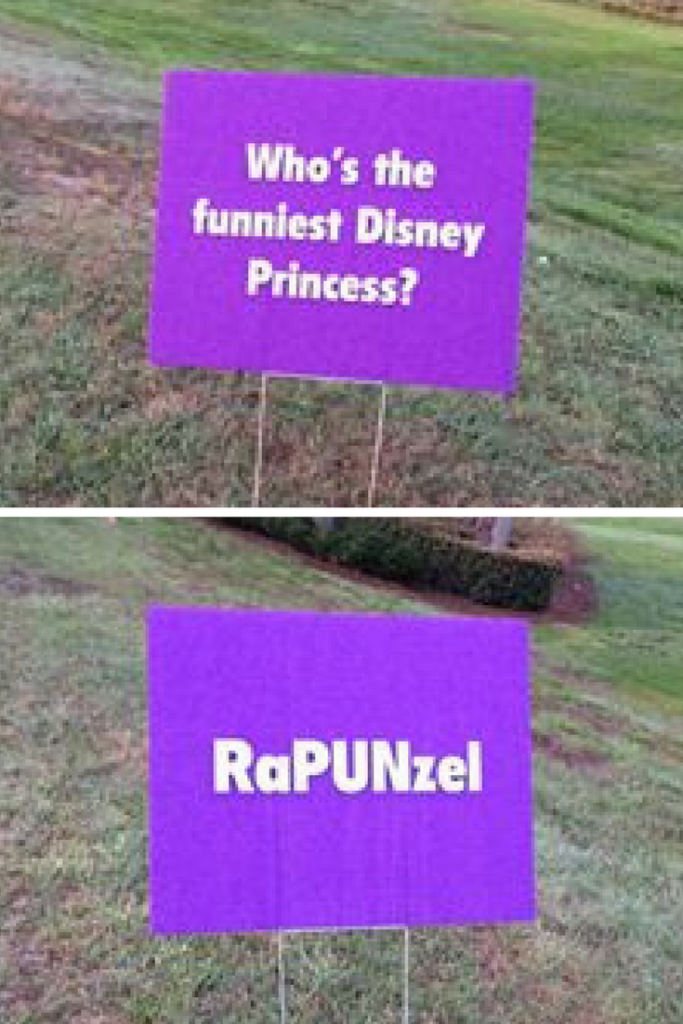 Then finally past mile 12 you’re back in Epcot and you have the energy of being in a park again!  There’s a DJ playing by Spaceship Earth and it’s a little more exciting, plus not that much further to the finish line.

This time I had several people waiting for me at the finish line! Jason and Vince were early on in the crowd before I crossed, and my friends Kristin and Mercedes were waiting for me after I crossed.  I got my beautiful medals (including the challenge medal for doing both the 10k and the half marathon), grabbed a glass of champagne to celebrate, and waited for our other friends. 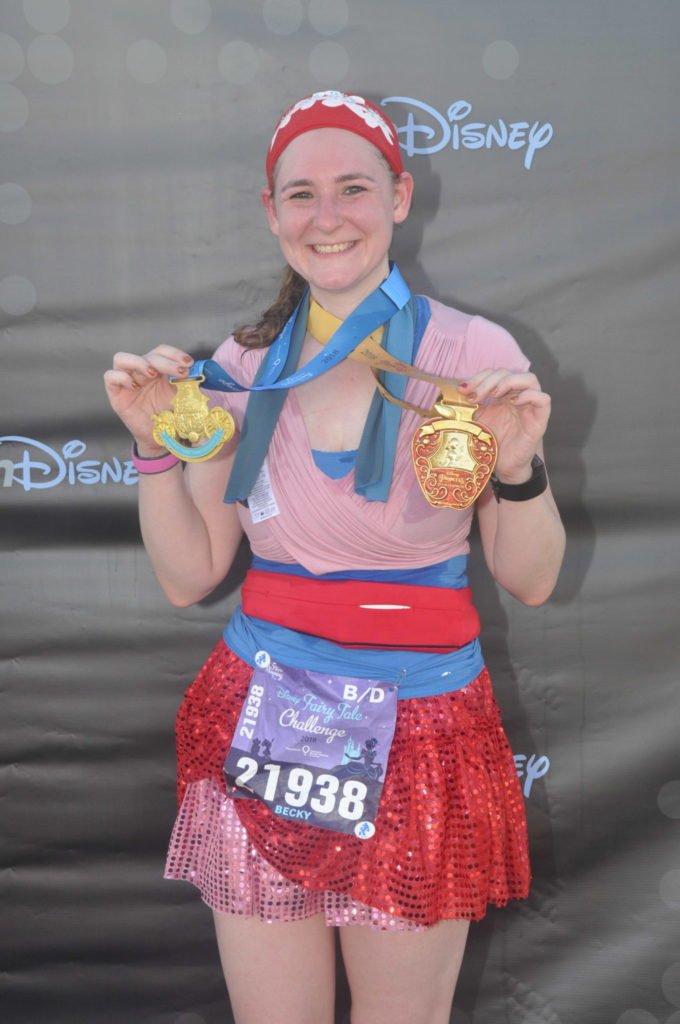 It felt like an exhausting race for a few reasons. The heat and humidity were higher than normal (though I’m okay with that, I’d rather it be hot than cold). The early mornings are tough, and having other people running the race means some waiting around when I just really, really need a shower and a nap (don’t worry, I got those things eventually!). And it turned out to be my best Princess half marathon time so far. I finished in 2:36:06, including all of my stops, which is an 11:55 pace. I’ll take it!