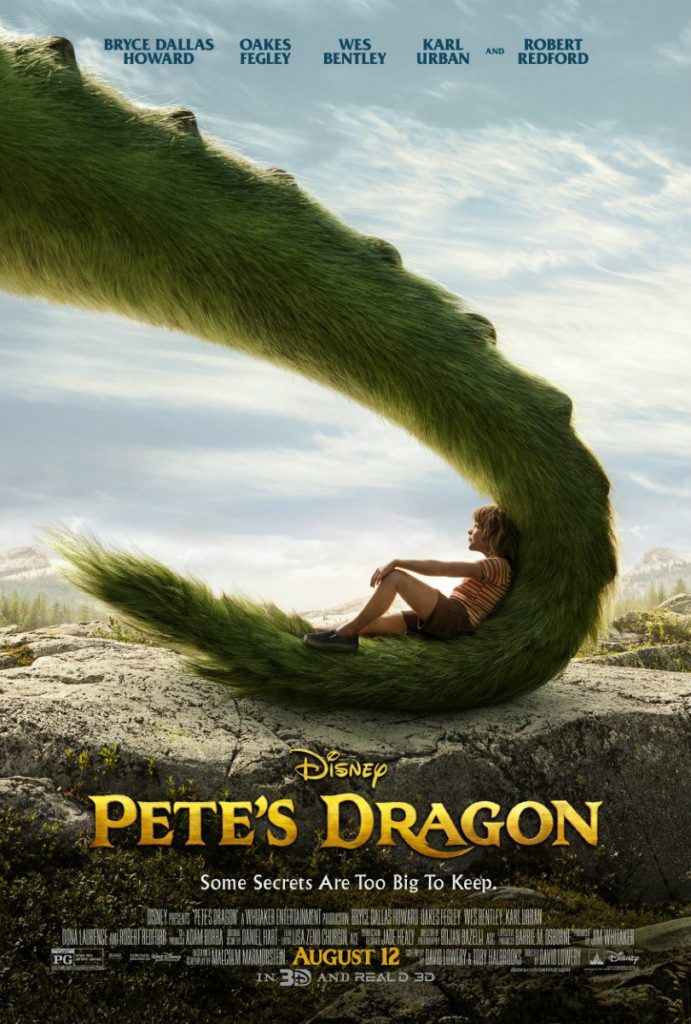 I try to see as many Disney movies as I can when they come out, but let’s be honest – going to the movies is expensive.  So Pete’s Dragon is one that I planned to wait for the DVD for, until I got a ticket to see a free pre-screening.  So off to the theater we went, and I am so glad we did!  I enjoyed the movie much more than I expected to.

I will admit that I saw the original 1977 version perhaps once as a child and have very few memories of it.  So I won’t be doing much comparison in this review, but rather looking at it as an entirely new film.  Which is fair, because after refreshing myself on the plot of the original through wikipedia, the two movies bare almost no resemblance.  The stories are almost totally different, so if you’re a fan of the 1977 movie be aware of that going in. 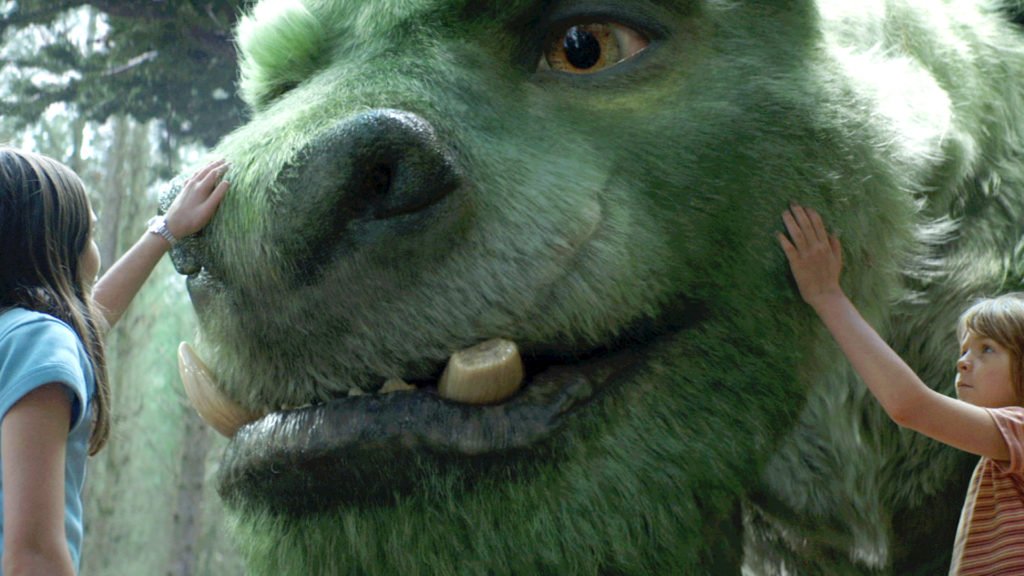 The plot itself is fairly simple: a young boy named Pete finds himself alone in the woods after a tragic accident, where he befriends a dragon which he names Elliott.  He lives on his own for 6 years until he is finally found by people in the nearby town.  While Pete attempts to adjust to life with humans, some other members of the town become obsessed with hunting down Elliott and claiming him as a hunting trophy.  Pete and his new friends have to fight to save Elliott (and the forest).

Although the story is basic and somewhat predictable at times, it doesn’t really matter because the heart of the film is in the characters and how they react.  The plot twists are ones that you can generally see coming (“oh, that person is going to die” or “okay, he’s going to end up being related to that other guy” sort of thing).  The CGI is cool, and the scenery is beautiful, but it’s not even the focus on the film.  Pete’s Dragon is a movie that shows that Disney and Hollywood are still willing to make character-heavy stories, and not always flashy action-packed blockbusters. 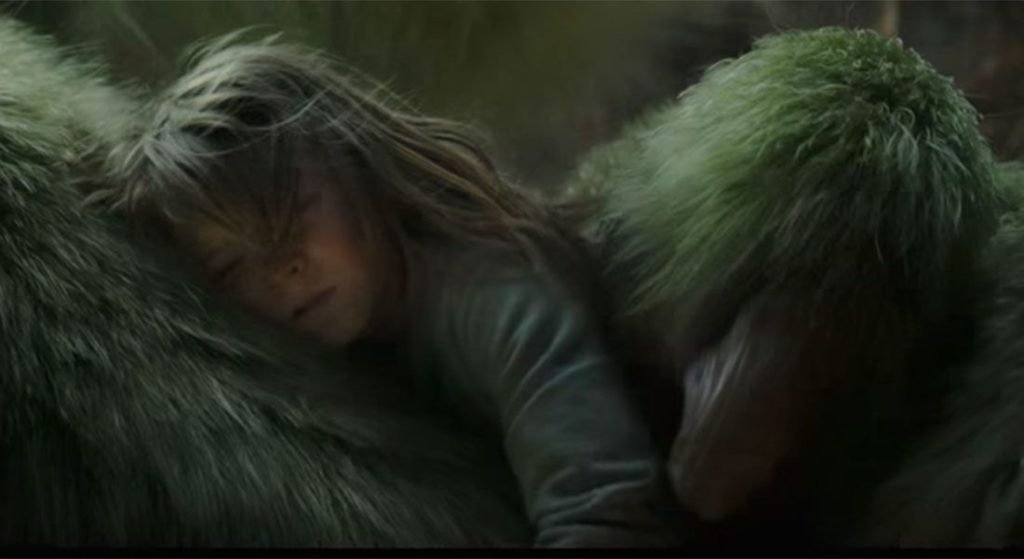 Pete, played by Oakes Fegley, is absolutely charming in a Mowgli/Tarzan sort of way.  I’m not sure how old the actor actually is, but he has an absolute babyface that makes him look young to be playing a 10 year old – but it actually works because he really captures the innocence and naivety that Pete has from living in the woods for so long.  Bryce Dallas Howard plays Grace, who is the first one to find Pete in the woods and takes him under her wing.  She is soft, sweet, but still has a tough side to her and Howard does a good job capturing that. We also have Wes Bentley who plays Grace’s boyfriend Jack, and Oona Laurence is precocious as Natalie, Jack’s daughter and a girl around Pete’s age who befriends him.  Robert Redford appears as Grace’s father and is absolutely perfect as the old man in town who is the only one who believes in dragons until Pete comes along.  There are some actors who are just really special, and Robert Redford is one of them.  His talent shows through in everything he does, and his character is nuanced and loveable.

Our villain is played by Karl Urban, who not only tries to knock down all the trees and destroy the forest but then tries to capture Elliott the dragon, just so he can say he caught a dragon.  You may or may not know this but I’m a pretty big Trekkie, so I’ve been a fan of Urban for his part as Bones in the new Star Trek films.  He’s pretty much perfect here as Gavin, who like many of the other characters has more than one side to him.  I also think that Karl Urban is gorgeous and so felt rather conflicted every time he was on screen (“he’s beautiful! but he’s doing bad things! please show him again!”).  His character is the type you want to punch in the face though, so I will admit I was a bit disappointed that no one actually did (Come on, Robert Redford!). 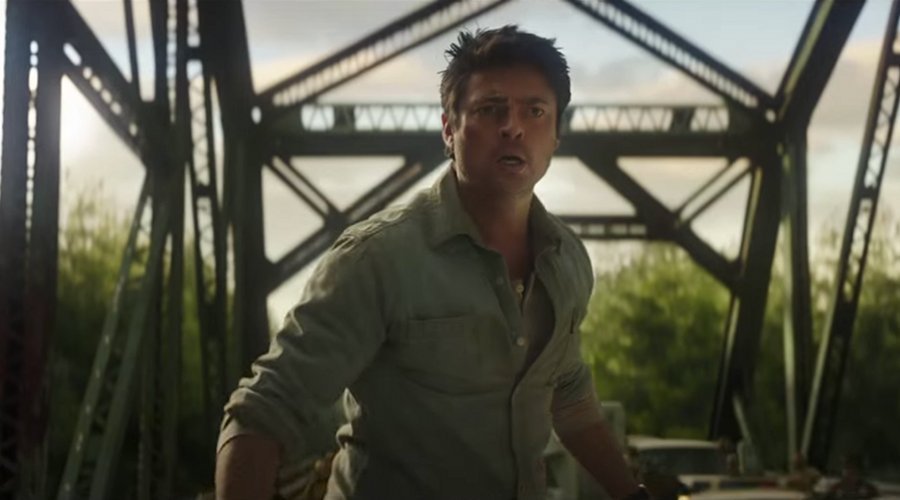 And boy did this movie tug at the heartstrings.  It wasn’t even super depressing or sad, but just emotionally moving.  By the end you could hear almost everyone in the theater sniffling.  It had a lot of interesting themes going on.  It touched a little on environmentalism but not in “bash you over the head with it” way.  And then the overall theme of growing up and moving on from things in life.  It’s hard not to get a little choked up about that.

If you’re looking for a quality family film to see before summer comes to an end, this is the one to see.  Hit the theaters and let me know what you think!

Have you seen the original 1977 Pete’s Dragon?  Are you excited for this new version?