You are here: Home / At Home / Never Never book review 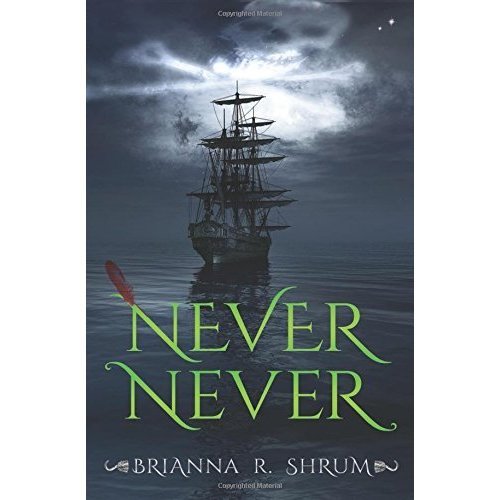 Never Never, by Brianna Shrum, is a new take on the story of Peter Pan.  The villain perspective has been very popular lately, and this time the story is from the point of view of Captain Hook.

Retellings of fairy tales and classic stories are probably my favorite genre of book to read. However, I’ve found they can be rather hit or miss. This one I thought was quite good (though not perfect). I enjoyed reading it and found myself drawn in easily. Although it was about 350 pages it felt like it moved at a good pace.

James Hook is a 12 year old boy living in London who meets Peter Pan one day. Pan wants to take him to Neverland, but Hook is actually looking forward to growing up and attending Eton. He makes a deal with Peter to just visit Neverland on a 1 week holiday. However, once he’s there he soon realizes he is trapped in Neverland forever and won’t be able to get home. He tries to join the Lost Boys but comes to conclusion that he is too different. James is meant to grow up, and his fate is to become the captain of the pirates.

I thought James’ character was pretty well developed and interesting. I found myself rooting for him even as he started to do more and more bad things. He didn’t feel like a villain for most of the book, even though by his actions he often was. Pan is made out to be the real villain of the story. His attitude, and some of the things he did, were definitely extreme and made me feel a little sick. But it worked.

There were definitely times when I felt uncomfortable reading this due to the childhood notice of Peter Pan being disrupted, but that’s what the book is going for. It wants you to be outraged and shocked by getting a look at the “real Peter Pan.” There are also some really sweet and romantic moments too. It told a good love story between Hook and Tiger Lily that felt realistic.

The one thing that struck me as odd is that I find it hard to categorize this book. For the first section James is 12 years old and it reads very much like a middle grade novel. However, once James grows up it has a much more YA feel to it – there are some things that would probably be inappropriate for middle schoolers (there is definitely sex involved, though not descriptive, and some parts are pretty violent). So I feel like it’s not appropriate for some middle schoolers but some teens might be turned off by the feel of the beginning being a little younger. But as a 28 year old who enjoys middle grade and YA, it worked for me 😉

Overall I think if you’re interested in the Peter Pan story and you like “twisted tales” and villain backstories, this will be one that you’ll really enjoy.  I recommend checking it out!

Have you read many villain backstories before?  What villain would you want to know more about?