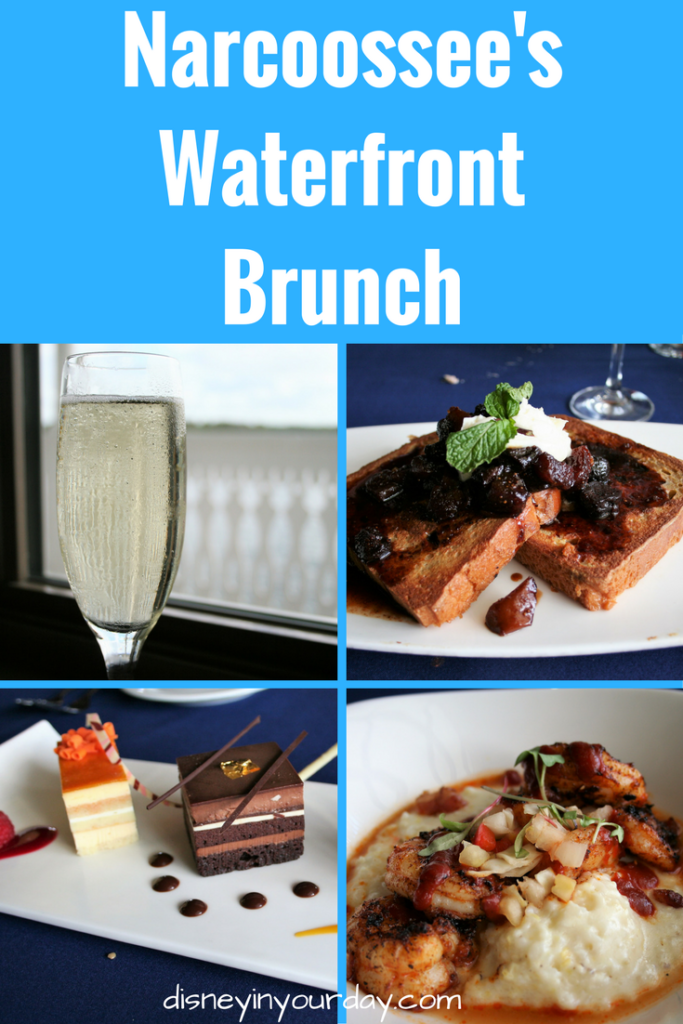 I have a lot of things on my Disney bucket list (many of which are food related!), and when I first started hearing about the Narcoossee’s Waterfront Brunch, it definitely made the list.  I didn’t think I’d have the opportunity to do it anytime soon, but we actually managed to squeeze it in on my short weekend trip last month! 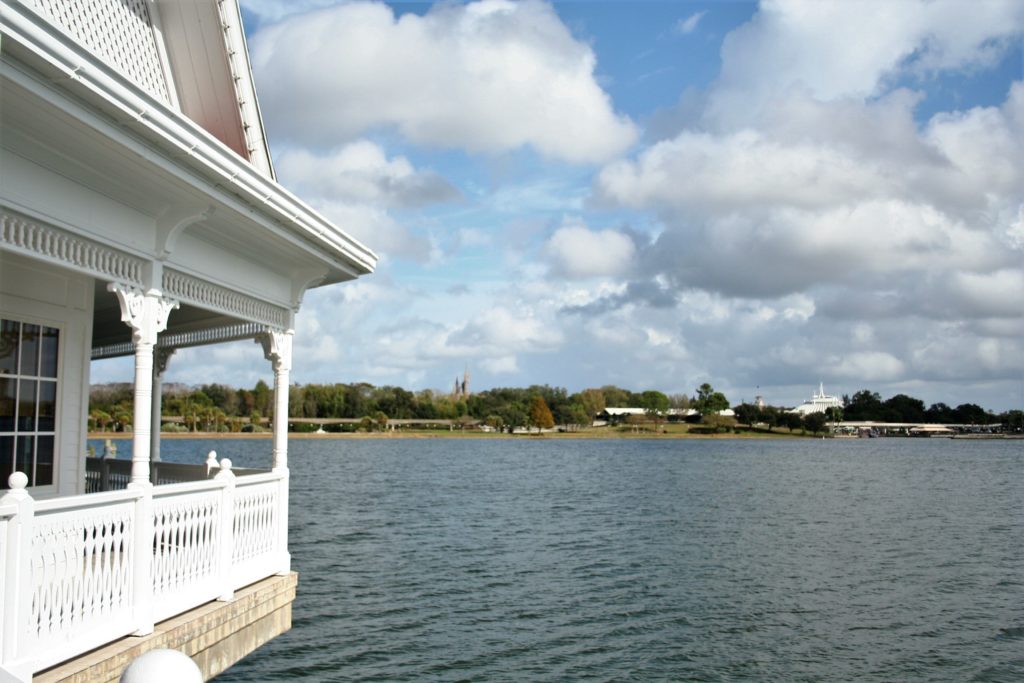 The view from Narcoossee’s patio.

Narcoossee’s is a signature restaurant and normally only open for dinner, but on Sundays they do a special brunch.  It is $69 per adult and includes appetizers, entrees, and dessert, as well as unlimited mimosas, prosecco, non-alcoholic beverages, plus 1 bloody mary.  We had a fabulous server named Jason who was very knowledgeable and passionate.  He explained everything to us and also told us that the food basically works like the cruise – if you wanted to try more than one thing he was happy to bring both.  I thought they might be smaller portions but he brought a full size version of everything we asked for!

I started with the Prosecco.  It was a nice, sparkling wine. 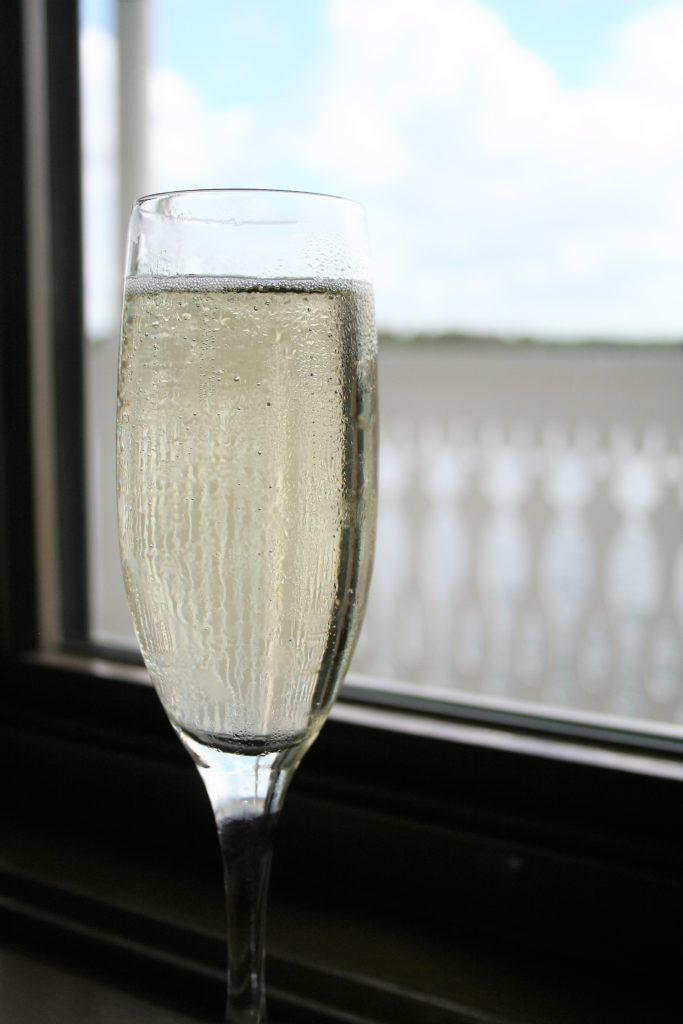 My friends had mimosas and they were good – your typical breakfast mimosas! 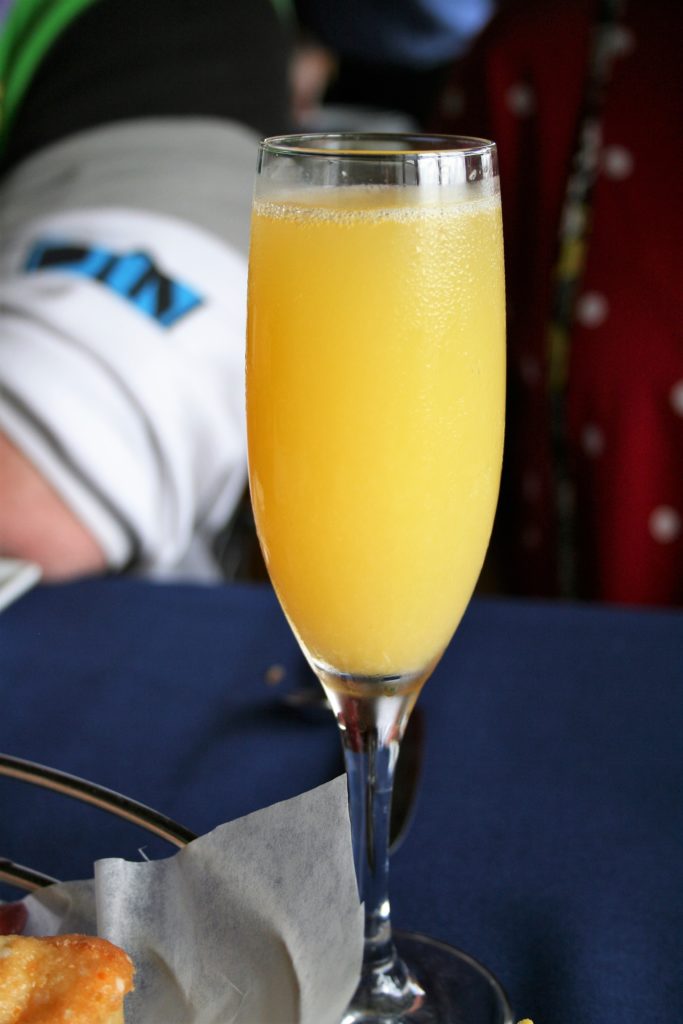 I also tried the Bloody mary just because I’d heard such good things about it, and it was included anyway.  I’d never tried one before but didn’t think I’d like it.  Unfortunately I was right.  A spicy tomato juice cocktail is just not the drink for me.  But it came loaded with seafood so I can see why you’d only get one.  If you like bloody marys I heard this one is great! 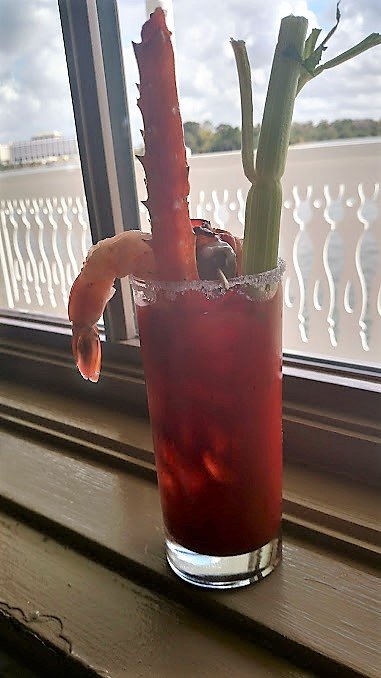 My friends also each got a non-alcoholic smoothie.  They had the mango and the chocolate, and though I didn’t try it they looked quite good. 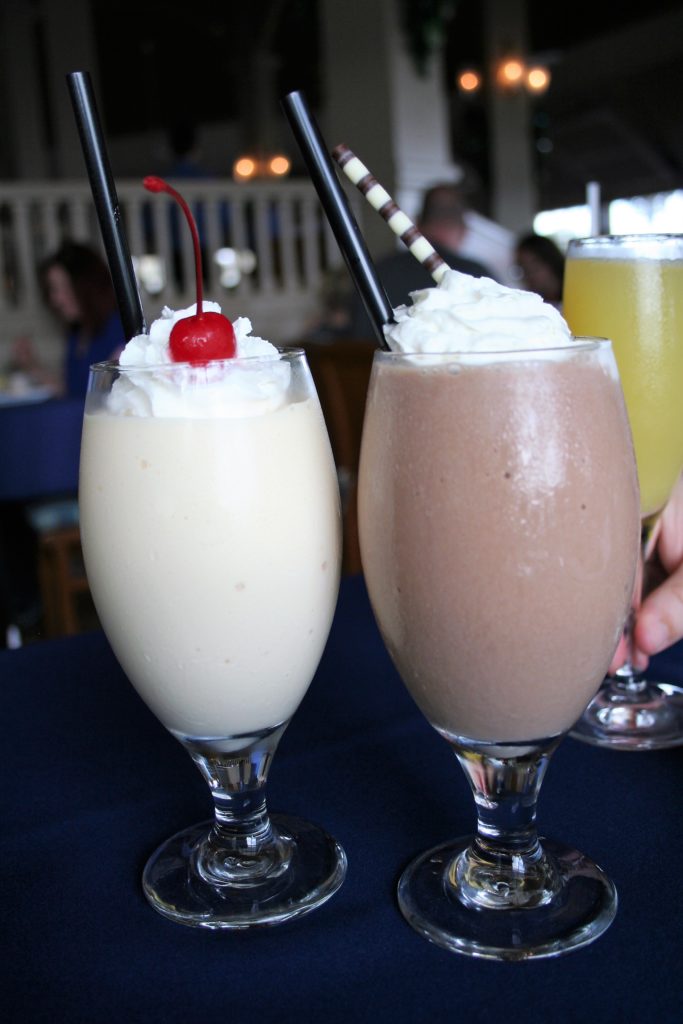 They brought out a pastry basket which had cheese danishes, croissants, and lemon muffins.  I tried half a croissant and a lemon muffin.  I loved the croissant with the hibiscus butter they served, and the lemon muffin was great with the jam.  They offered to bring more pastries if we wanted but we were saving room for the rest of the food coming! 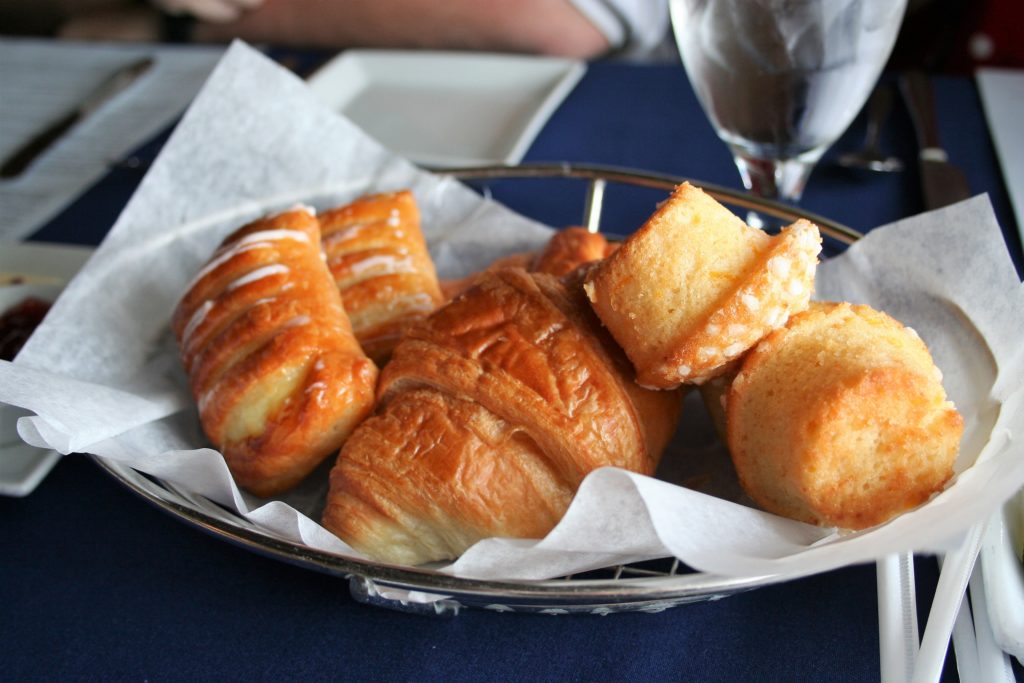 We each got an appetizer and then split one as well.  I started with the shrimp and grits (Creamy Antebellum Grits, Green Tomato Chow-Chow, and Cherrywood-smoked Bacon). 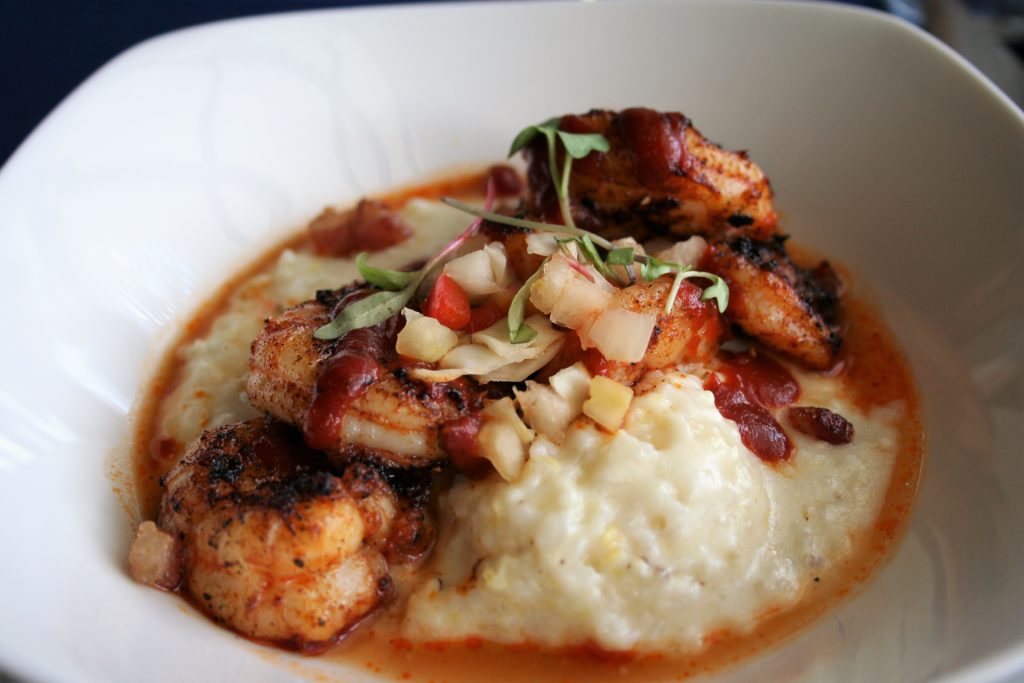 I’m not a huge fan of grits but I love shrimp, and I figured if there was ever a place to try good grits it would be at a fancy pants restaurant.  And they were quite good.  The dish was rather spicy overall though, which I wasn’t expecting (but didn’t mind!).

One of my friends got the corn and crab soup – and when his wife tried it she liked it so much she ordered her own bowl!  I had a spoonful as well, and it was definitely a good soup.  I could have had that as my appetizer and been totally happy with my choice. 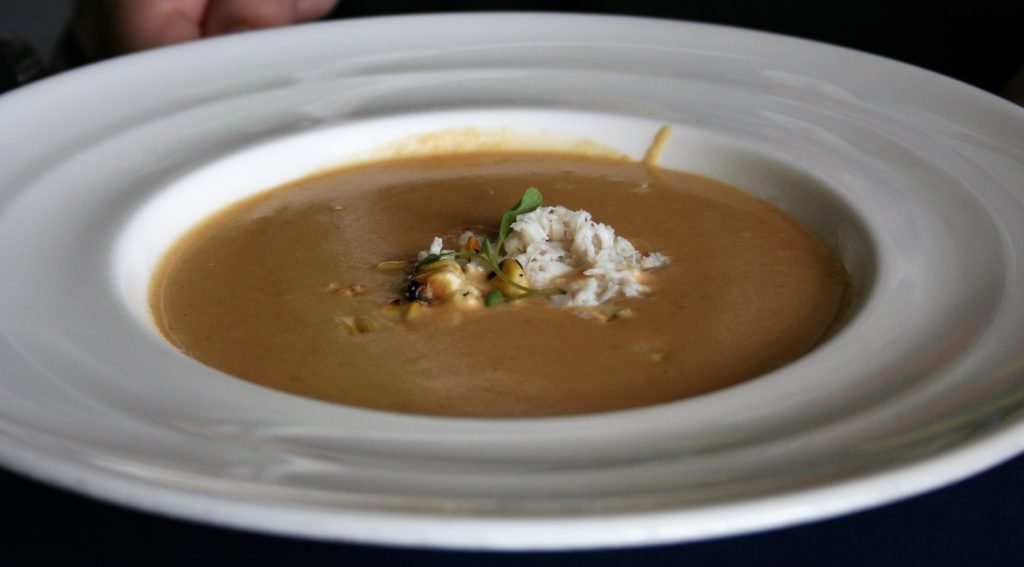 My other friend got the cheese plate for her appetizer, but we all ended up splitting it since she got the soup as well. 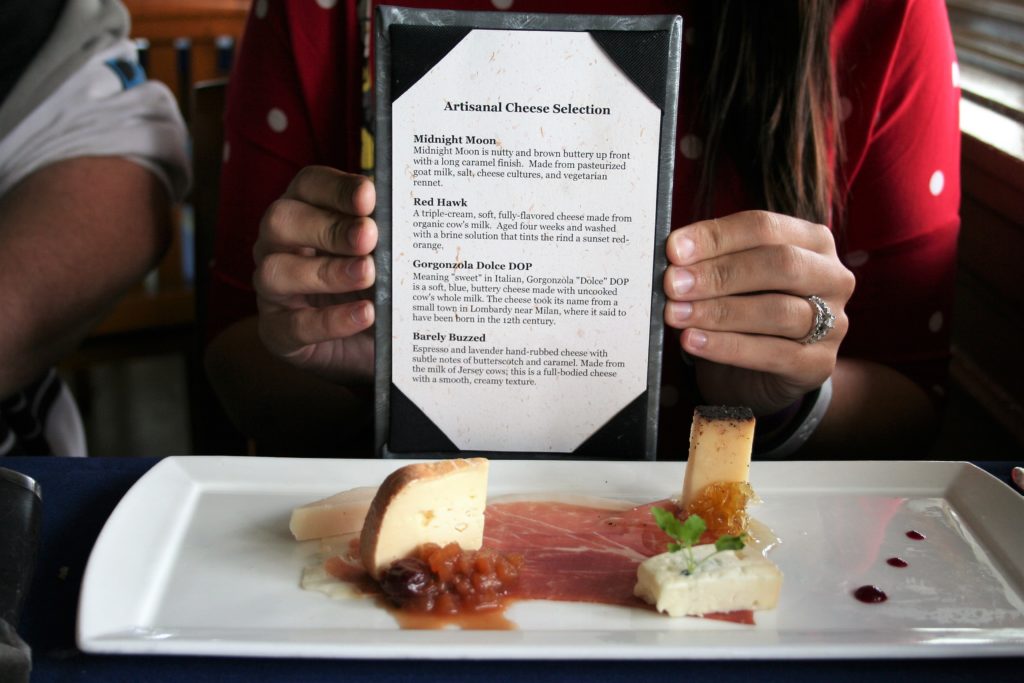 I love cheese, though I’m by no means any sort of cheese expert, I just like it a lot.  That being said these were definitely some of the most unique cheeses I’ve had.  I enjoyed them all, though I think all of us agreed that they got better as you went down the list.  The last one was a really interesting combination of flavors that included espresso and lavender. 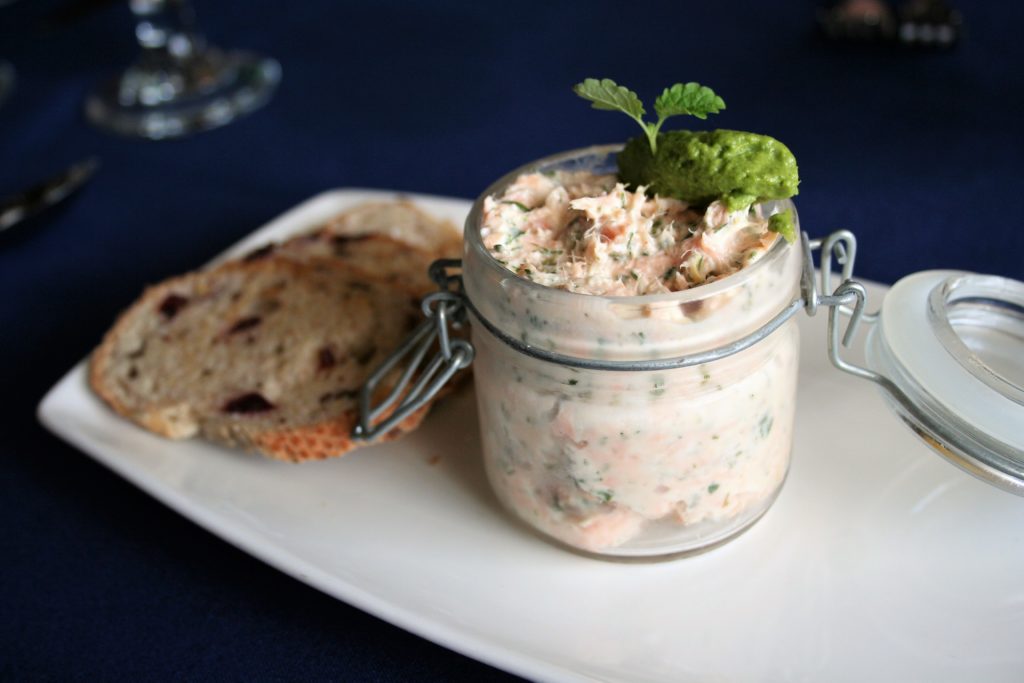 This was also great.  All of the appetizers we tried (and we had everything except the salad) were fabulous, so I don’t really think you can go wrong.  It definitely leans towards seafood fans, which is great for me as seafood is my favorite.

All 3 of us each ended up ordering 2 entrees as well.  I really thought it would be a half portion of each but he brought out too full plates for each of us.  Way too much food but it was so good!  For my first entree I had the Lobster Eggs Benedict (Toasted English Muffin, Butter-poached Maine Lobster, Country Ham, Soft-poached Eggs, and Citrus Hollandaise): 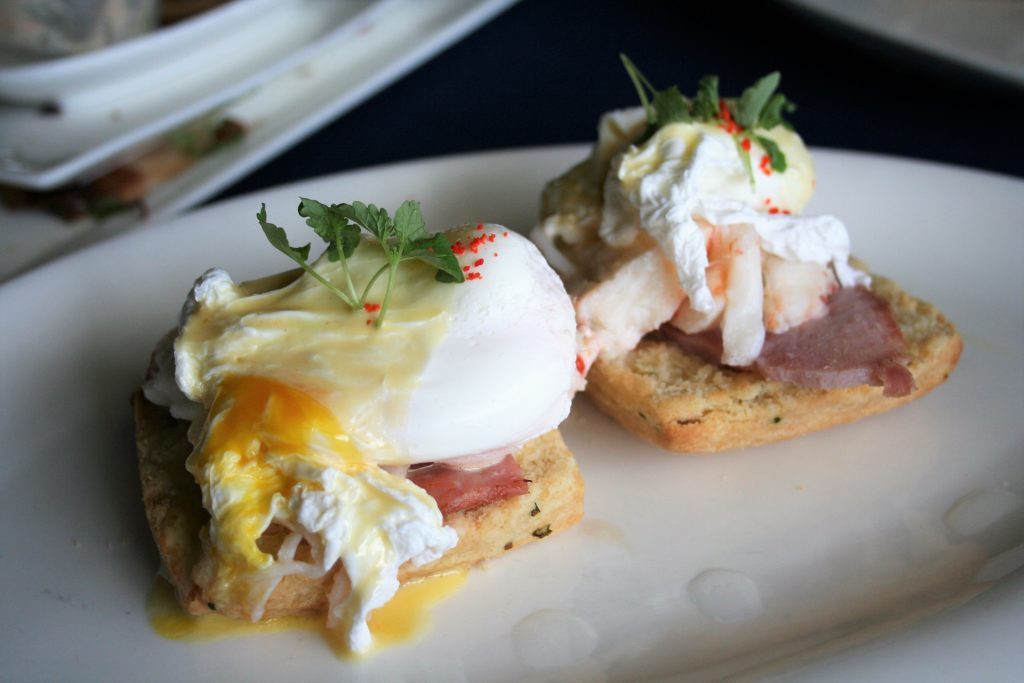 This was so good!  If I ever went back and I’d just get this.  The muffin was really tasty – it was thick, and more like a biscuit.  There was lots of big chunks of lobster with a delicious sauce.  I could eat this every day.

My second entree was the french toast (Caramelized Forelle Pears and Fig Chutney with Whipped Mascarpone): 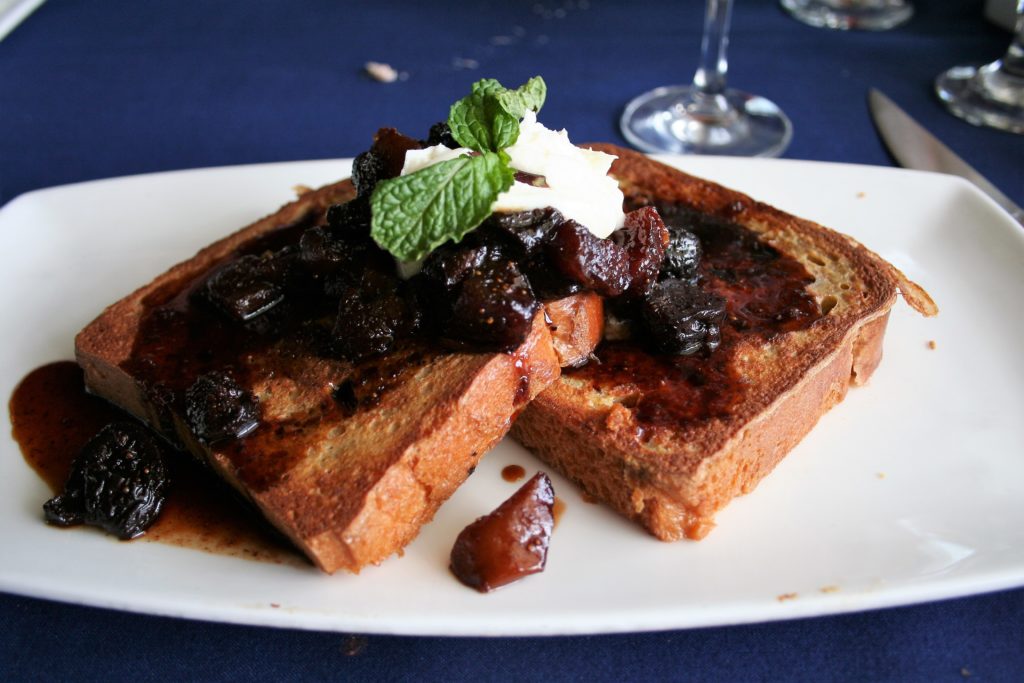 It was tasty, but at the end of the day it was just french toast.  Good french toast, but nothing out of this world extraordinary.  It was nice to have a little bit of it, but if I had only gotten that as my entree I would have been a little disappointed.

My one friend also got the eggs benedict, but as her second entree she got the steak and eggs (Black Angus Hanger Steak, Two Cage-free Brown Eggs-Any Style, Marble Potato Home Fries, and Truffle Aïoli): 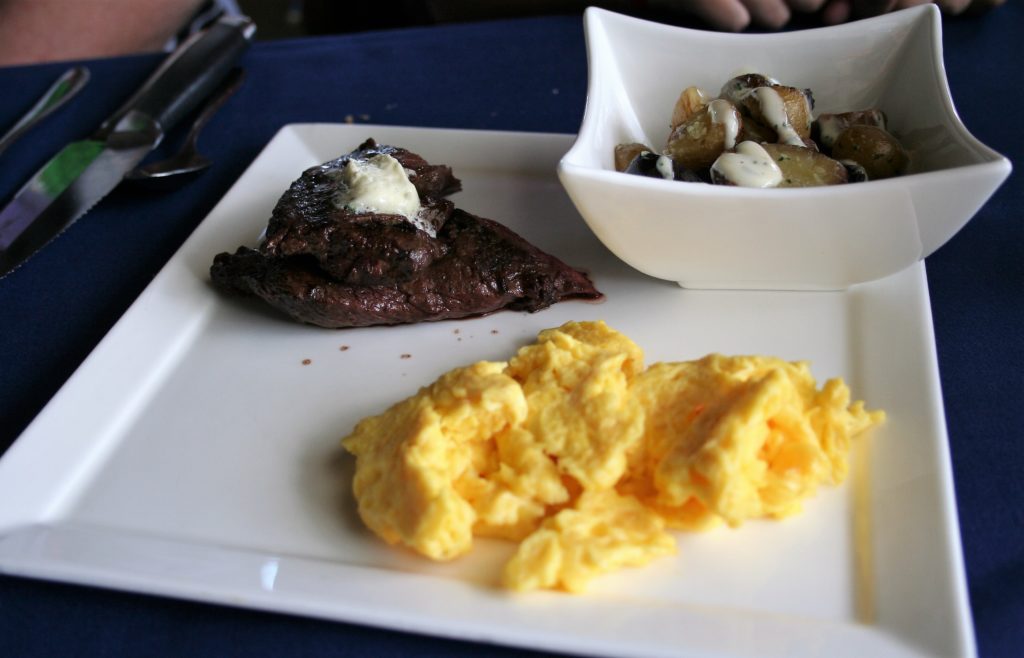 I tried some of the steak and I have to say it was really excellent.  Much better than any steak I’d ever seen at a breakfast before, it was definitely on par with a good dinner steak.  It was cooked perfectly and was melt in your mouth good.

My other friend got the chicken and waffles as his first entree (Crispy-fried Boneless Breast and Thigh with creamy Collard Greens on a Waffle with Maple Bacon-Bourbon Jam, House-made Apple Butter, and Candied Walnut Crumble): 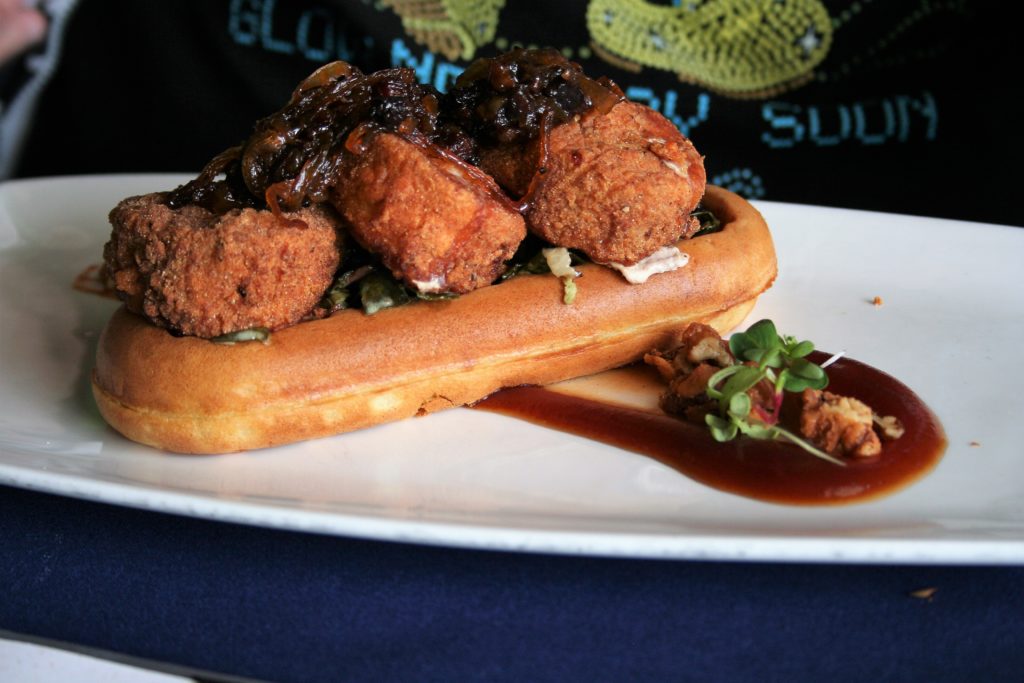 I didn’t try them so I can’t offer much commentary, but they looked good!

His other entree was the swordfish: 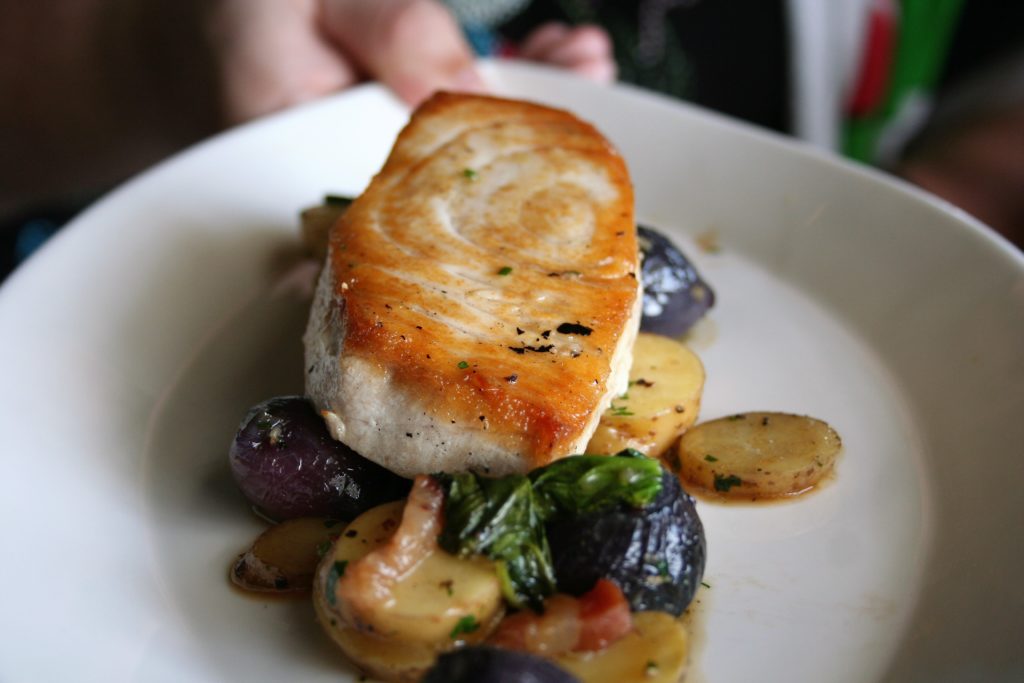 I enjoy swordfish but it’s hard to find it done right – this one was perfectly cooked with a good steak-like consistency.  I think the type of fish on the menu varies depending on the time of year, but if it’s swordfish and you’re a fan, it’s really good.

At this point we were all so stuffed, but dessert came anyway!  It was a dessert trio to finish out the meal (Valencia Blood Orange Bar, Triple Chocolate Cake, Lemon-Blueberry Timbale):

I couldn’t eat more than a few bites because I was so full, but they were all delicious, of course.  I think the lemon blueberry one was my favorite – I love that combo.

All in all, even though the Narcoossee’s brunch is pricey, I  definitely thought it was worth it.  I’d love to come back and do it again with my husband (or try the one at California Grill!).

Have you done a Disney brunch?  What here looks most appealing to you?