You are here: Home / Merchandise / My Orange Bird collection 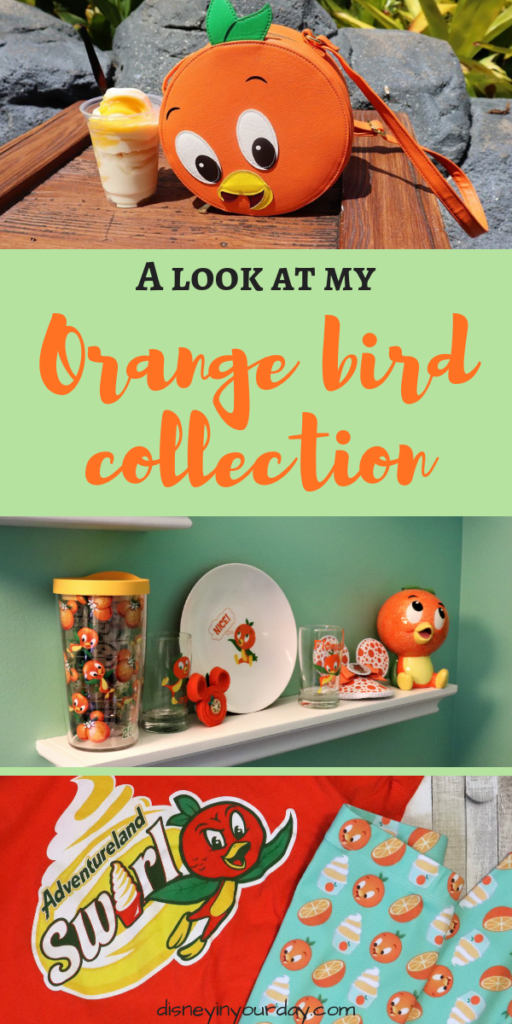 It’s no secret to most people that I am a huge fan of the orange bird.  Not familiar with him? He’s the mascot of the Sunshine Tree Terrace, the place where you will find the most delicious of all Disney treats: the citrus swirl.

The Orange Bird was actually introduced when Disney World first opened, as a mascot for the Florida Citrus Commission (which sponsored the Sunshine Tree Terrace).  He and the citrus swirl disappeared from the parks in the 1980’s when the sponsorship ended, and they weren’t brought back until 2012.  I have been a huge fan since his return.  As a lover of both the citrus swirl and all things orange, he was too cute not to quickly become a favorite! I started buying every piece of merchandise with him on it, which at the time wasn’t much.

Clearly I’m not the only one who loved him, though, because he’s gotten way more popular in the past 2 or so years!  Tons of new merchandise has come out, and while I don’t own all of it I do own quite a lot. Every time something new with Orange Bird gets released I probably have 3 or 4 people message me about it – which I appreciate, because I need to stay up to date!

I recently put together some shelves to display my knick knacks and Orange Bird goodies, so I thought it would be fun to share on the blog with everyone! Anyone else a big Orange Bird fan? 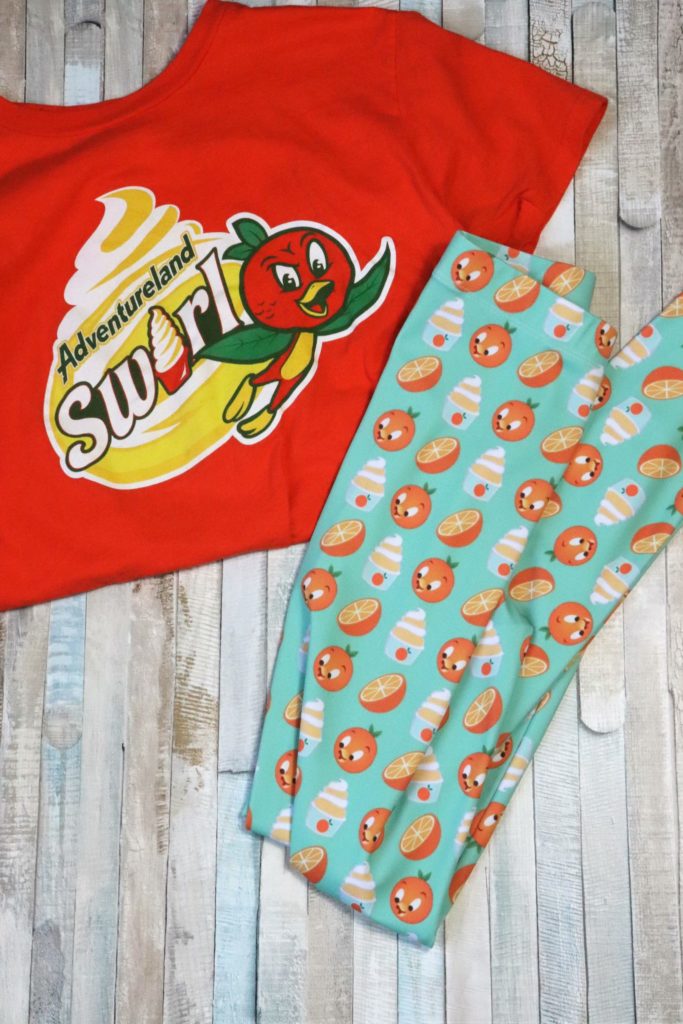 I have to admit I have a fairly extensive orange bird clothing collection! Here I’ve got the “Adventureland Swirl” shirt that Disney sold as part of their “March Magic” tournament.  The leggings are from RedBubble and are really smooth and silky! 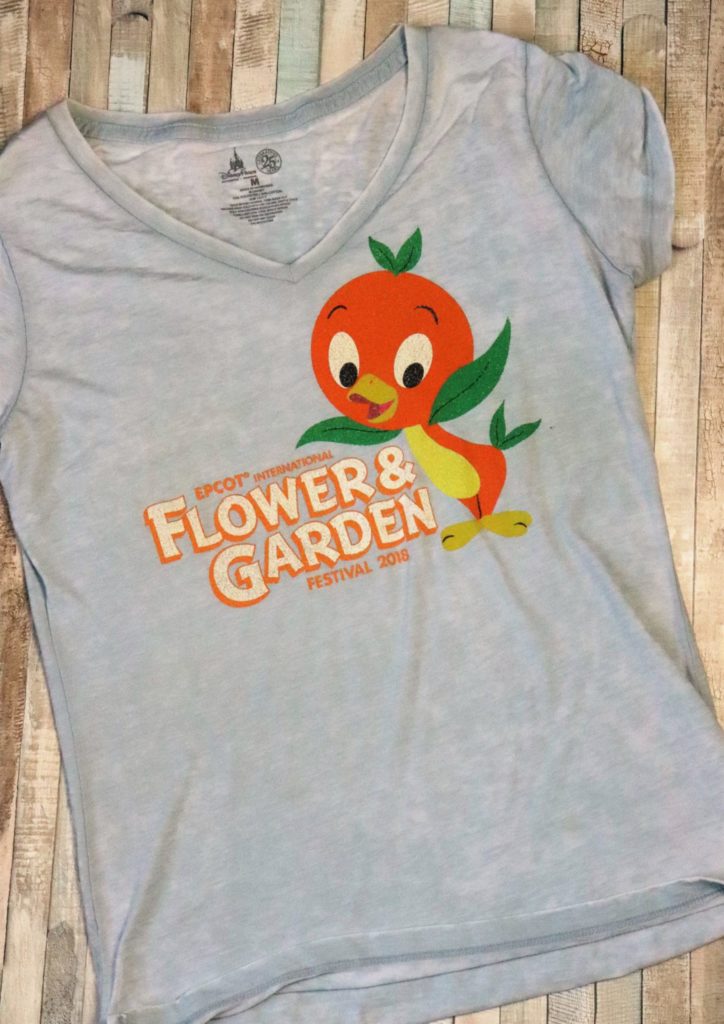 The 2018 Flower and Garden Festival had a ton of stuff with the orange bird on it, so of course I had to get pretty much everything, including this adorable shirt.

I love this citrus swirl tank top from TeePublic – it’s perfect for Florida, and I think I may pair it with the leggings above! (More about these adorable ears later in the post too!) 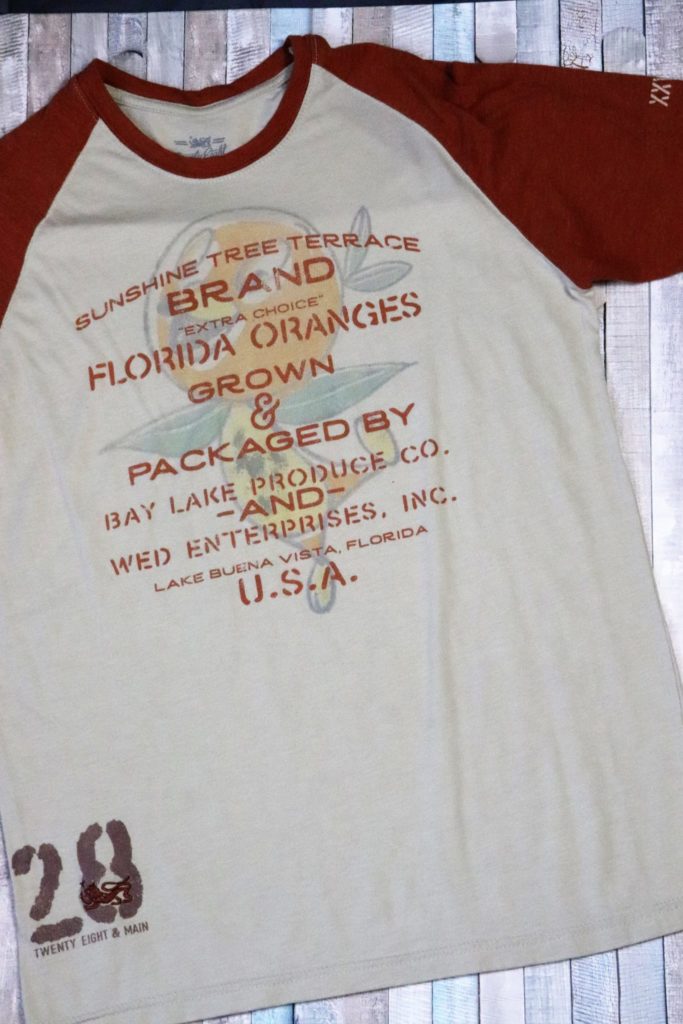 Here is another orange bird shirt that I have – this one is actually a men’s shirt, but at the time there was almost nothing orange bird available so I was buying whatever I could find! And I actually like the style, I think it’s cool looking. 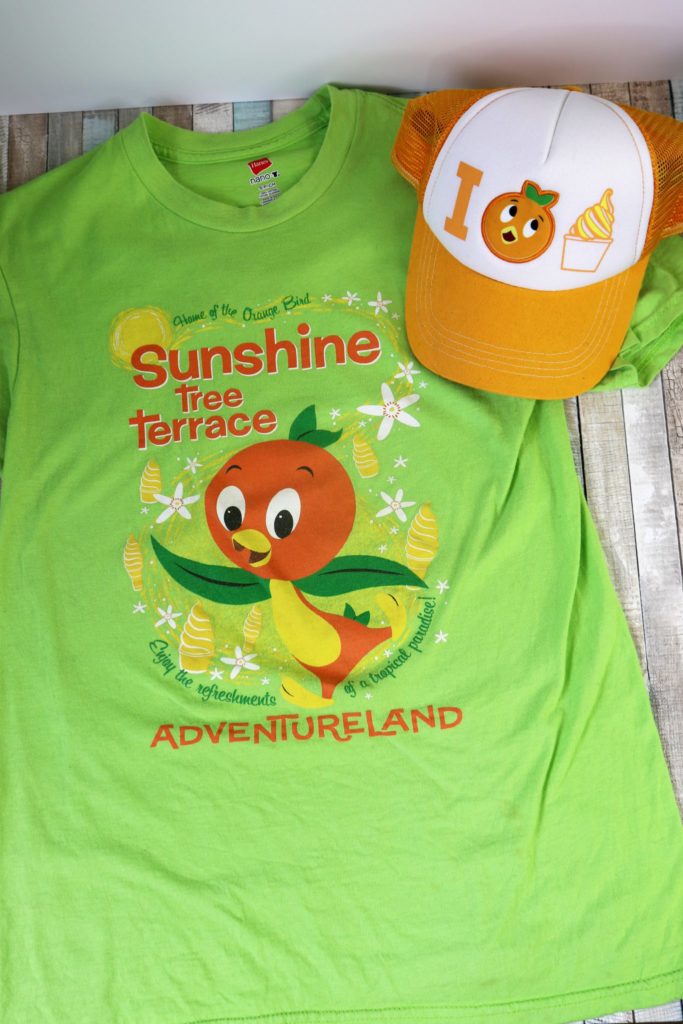 This is the first orange bird shirt I purchased and still one of my favorites! 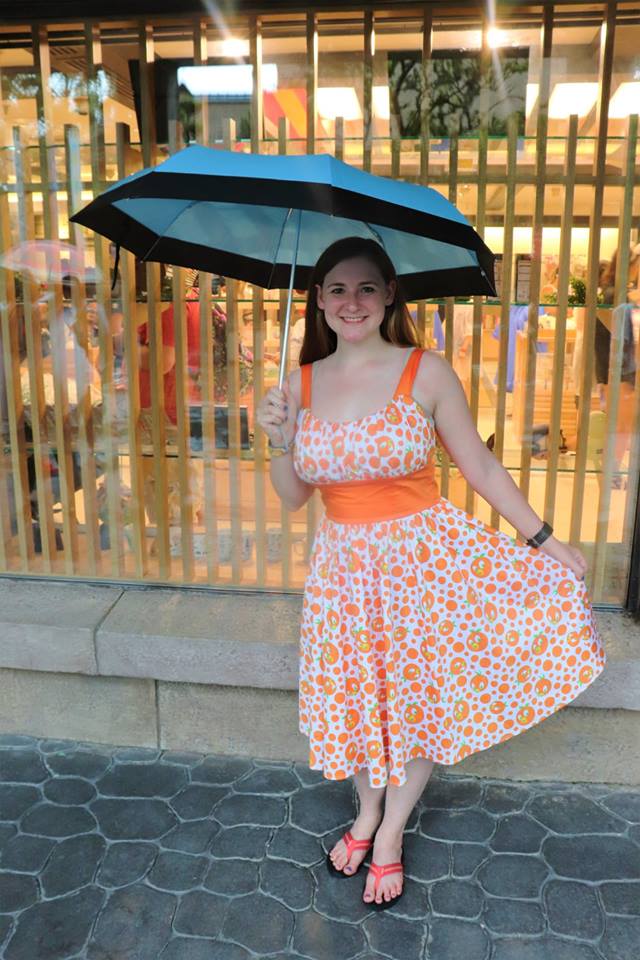 And then there is my favorite Disney dress!!  This adorable orange bird dress is from the Dress Shop in Disney Springs. They changed the style of it a little while ago (it now has a navy blue background instead of white), but you can still buy it in the parks or online. 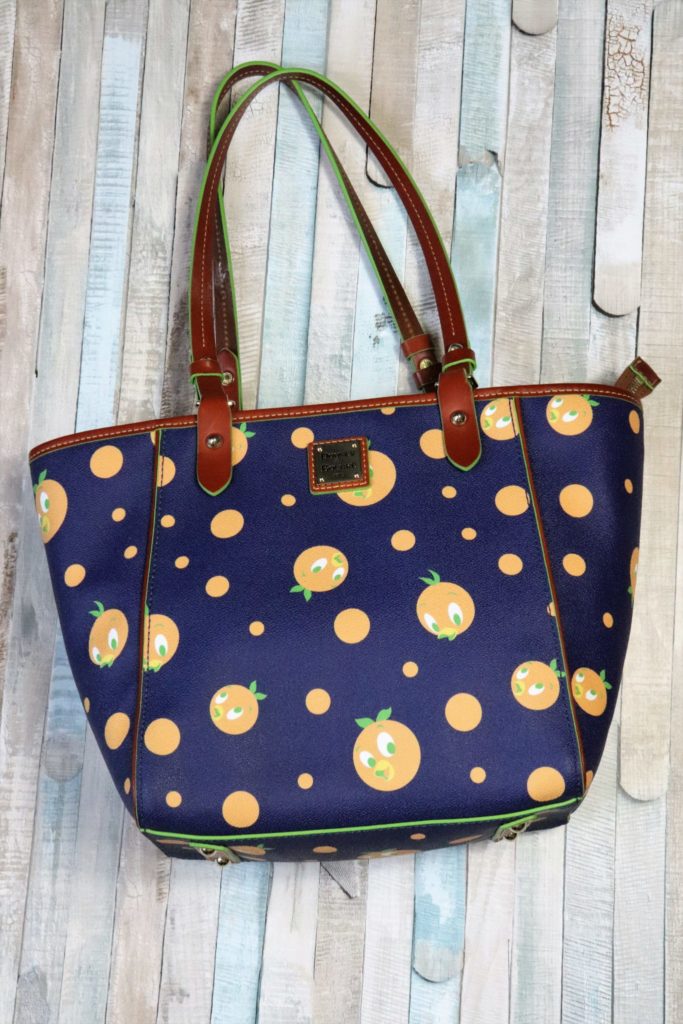 My new favorite purse ever!!  When they came out with an orange bird Dooney bag I was torn. I couldn’t see myself spending $250 on a purse. But it’s cute! Then it went on sale and I was able to get it for $130. And honestly, I love this bag and use it almost every day.  They don’t have this exact bag available online, but the Crossbody is still available and it’s on sale. 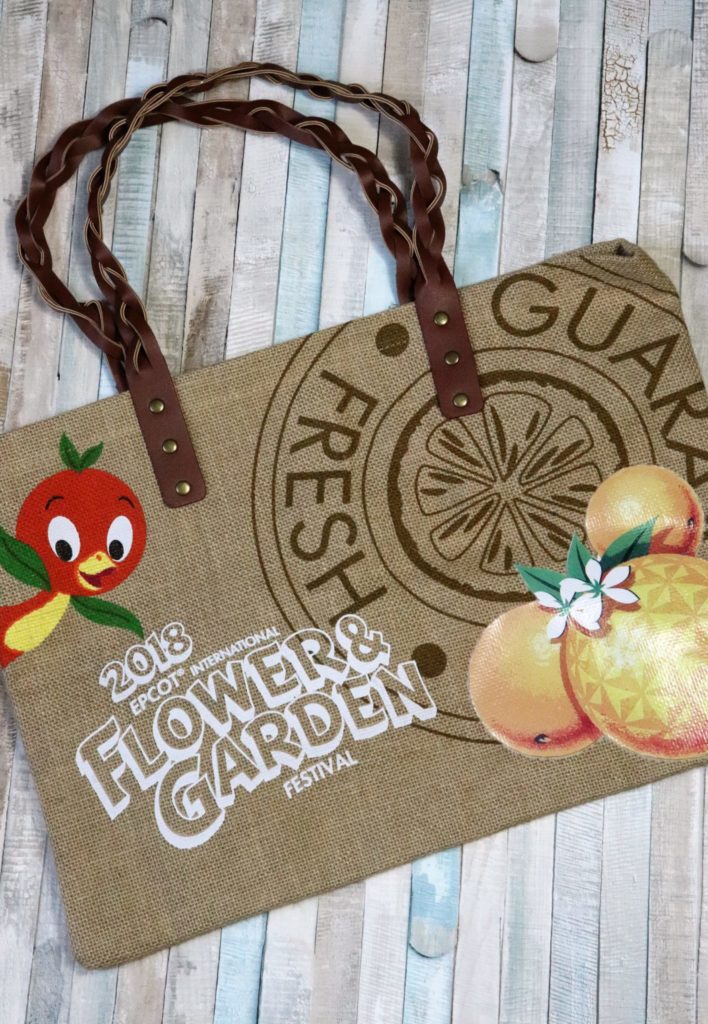 Another cute item from this year’s Flower and Garden Festival! This tote bag is made out of a burlap kind of material. 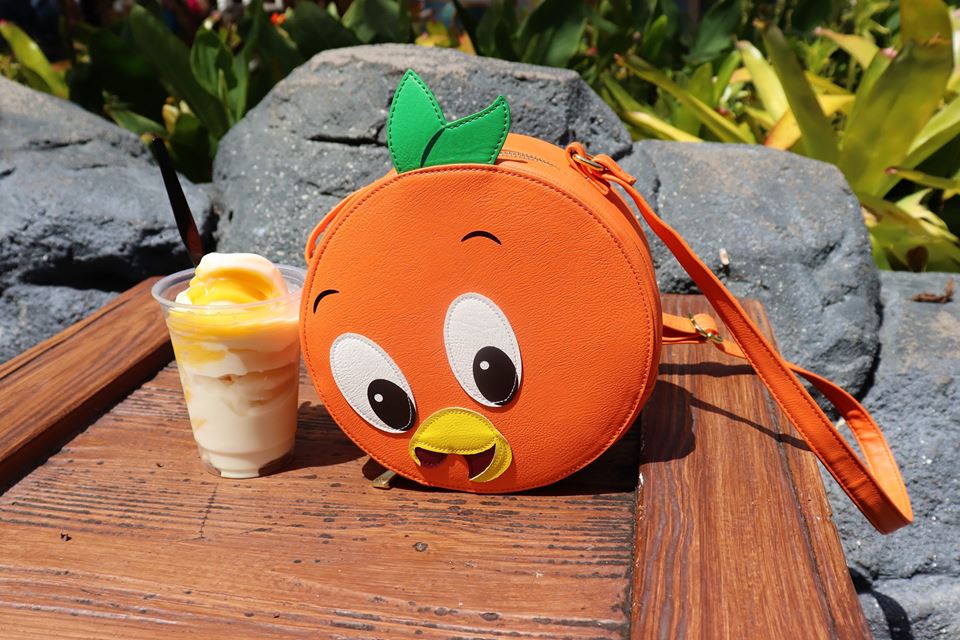 And then there’s this cute guy! This orange bird purse was my companion during my last Magic Kingdom day. 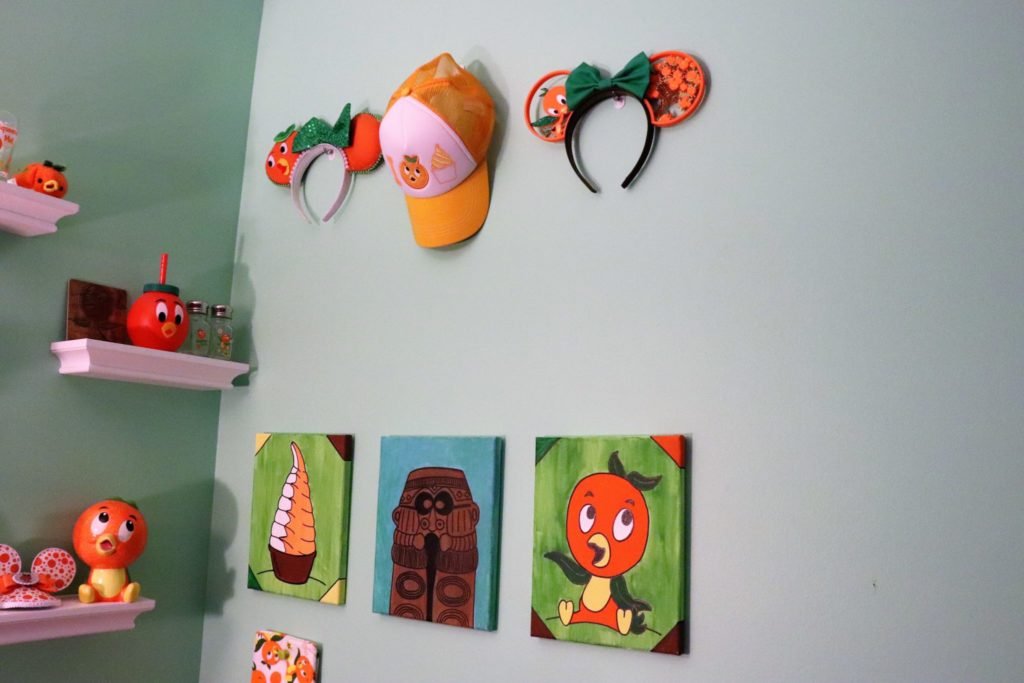 In addition to my cute little hair pins and fascinator (that you’ll see below), I have 2 pairs of ears and a hat.  Both of the ears were from Etsy, and they were both gifts so I don’t remember which shop they came from (nor can I track them down).  But there are lots of orange bird ears on Etsy! The trucker style cap came from Disney, and is available on their website.

I’m sure you can find lots of orange bird artwork on Etsy (I’d also love to see some in the parks by Disney artists!), but my orange bird artwork is pretty special because it was done by a friend of mine and given to me as a gift on my birthday.  It’s a series of three Adventureland inspired paintings, including the orange bird, citrus swirl, and tiki statue. 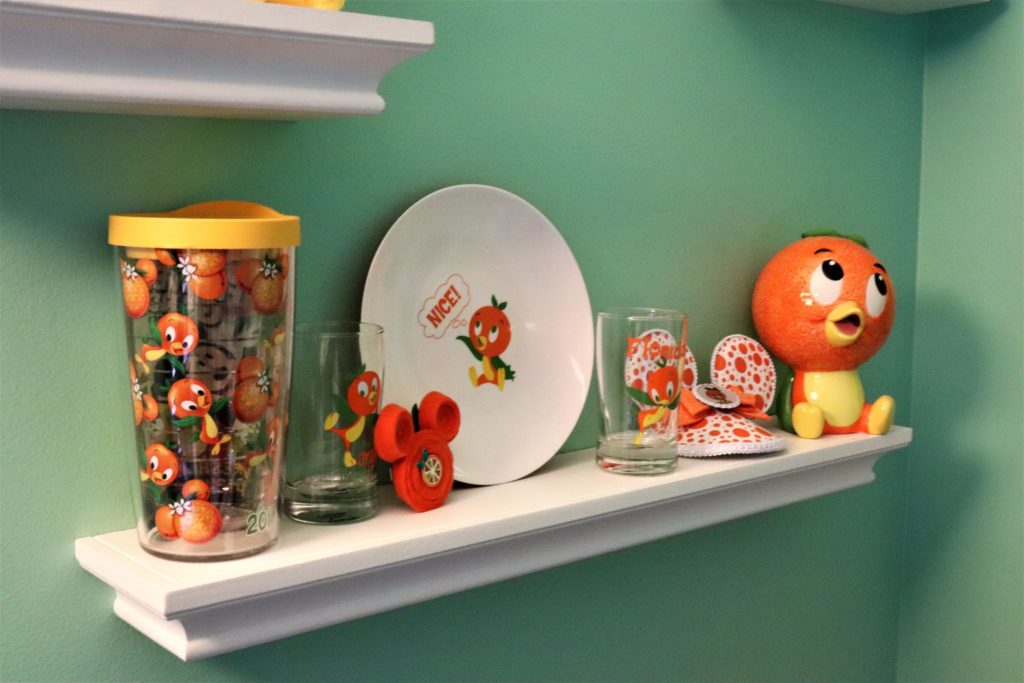 My smaller orange bird items have found a home on a set of shelves that now hangs above my desk in my office! A closer look at some of these: all the way on the left is tumbler from this year’s Flower and Garden festival. Next to it is a small juice glass (I have four of these that you’ll see on a few different shelves).  The small orange Mickey head is actually a hair clip I got from an Etsy shop called the Marrymaking Mouse. I love their stuff! Then we’ve got a plastic plate, another glass, and another great Etsy item – this one is an ear hat fascinator from Hollyday Hatbox.  I’m planning to wear it on my next trip!  Finally, there is a ceramic orange bird figure that they sold back when he first reappeared.

Two more smaller shelves pictured here. All the way to the left is the orange bird Funko POP Vinyl – they released him while I was actually in Disney World and I headed to Disney Springs over an hour before they opened to line up to make sure I got this limited edition item! Then you’ve got a magnet, another juice glass, and a plush. On the top shelf is a pitcher (I actually have a second pitcher for actually serving drinks, so this one is on display!) 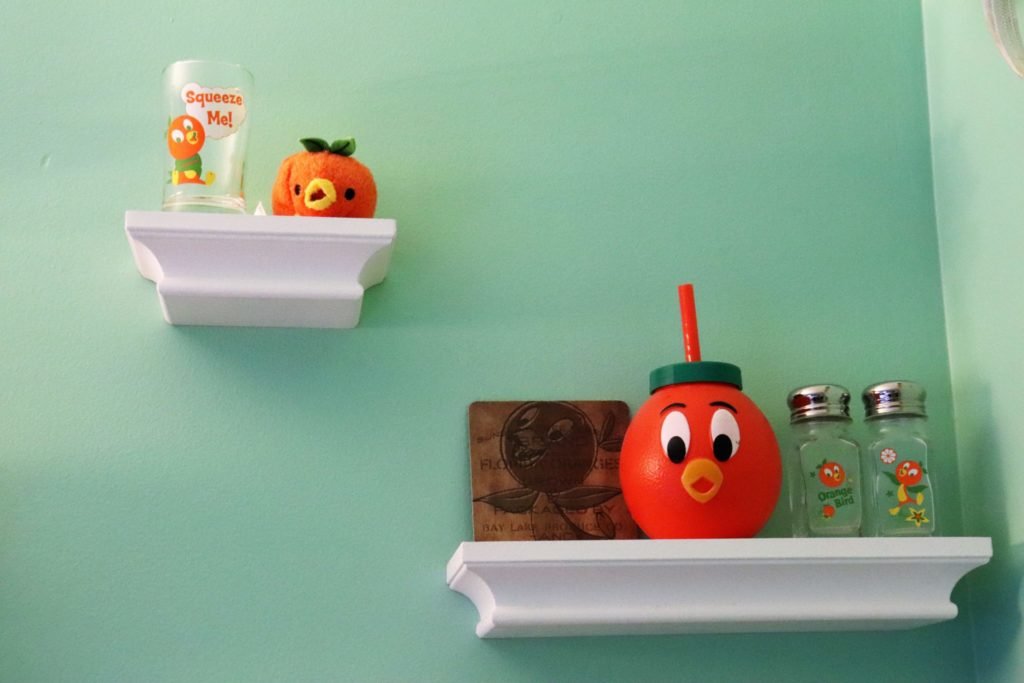 From left to right: juice glass, the orange bird tsum tsum, a coaster, souvenir cup, and salt and pepper shakers.  I think the cup might be the first orange bird item I owned. I got it when he first returned and they were selling soda or juice with it. 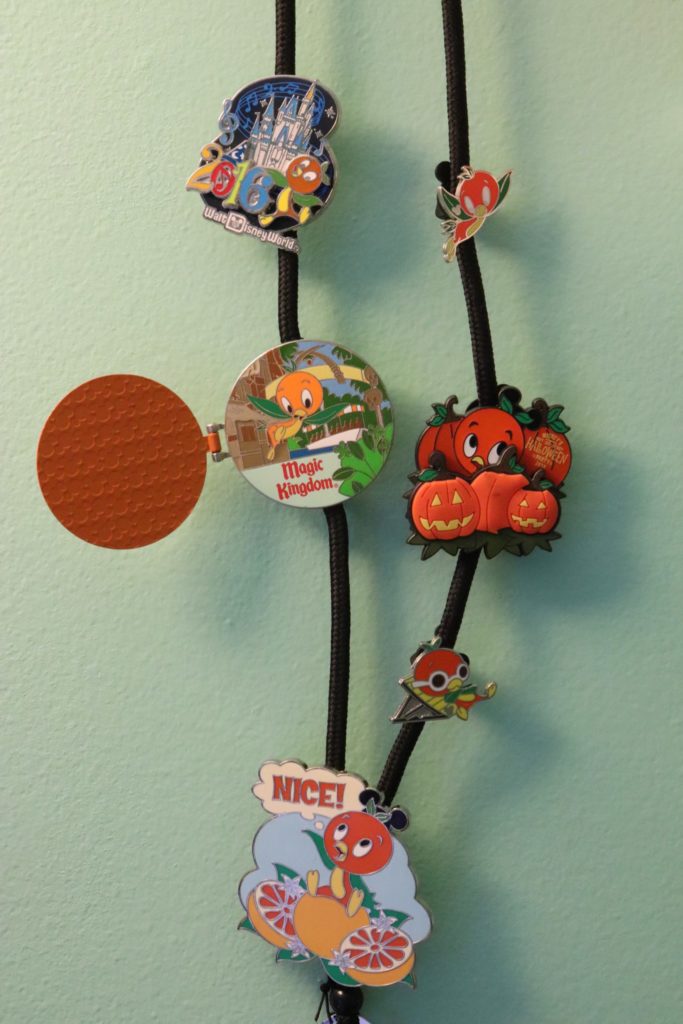 Anytime I’ve seen a pin with the orange bird on it, I’ve tried to grab it!  I’ve got a 2016 pin, an annual passholder pin, a few smaller ones I’ve seen on pin trading boards, this year’s pin from Mickey’s Not So Scary Halloween Party, and a special cast member exclusive pin that an awesome friend got for me. 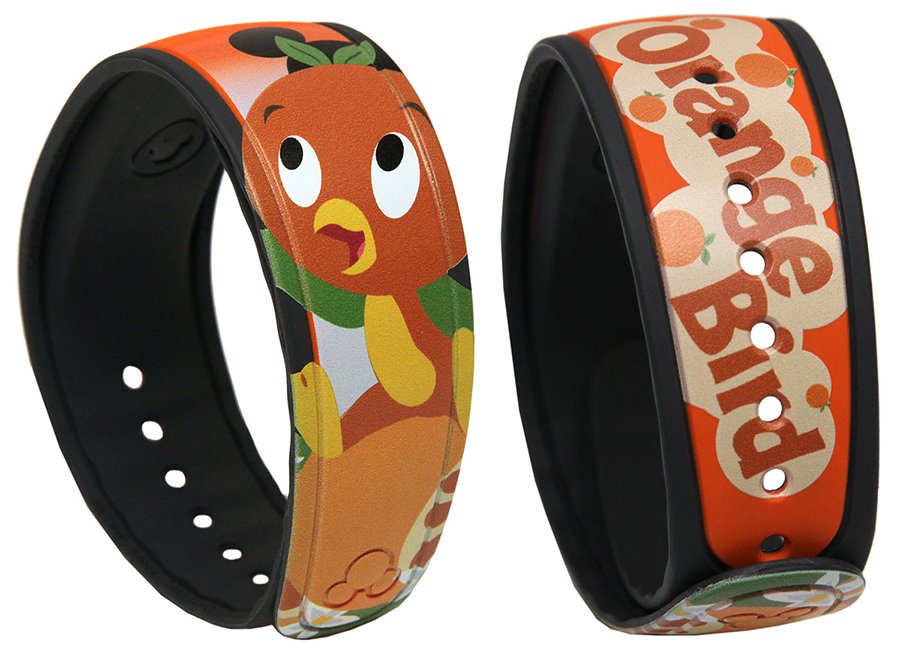 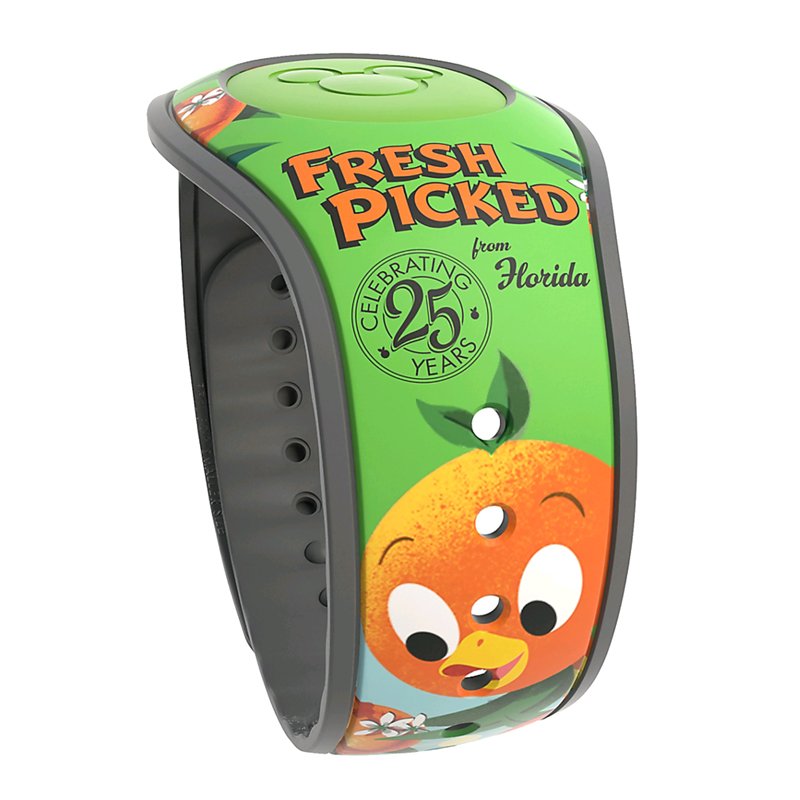 I am failing as a blogger right now because I don’t have photos of my magic bands – and I can’t for the life of me find them right now to take pictures!  I did however find these lovely stock photos so you can see what I’m talking about.  The top one is a first generation magic band, though it does still work.  The second one was this year’s Flower and Garden magic band. It has Mickey on the other side. 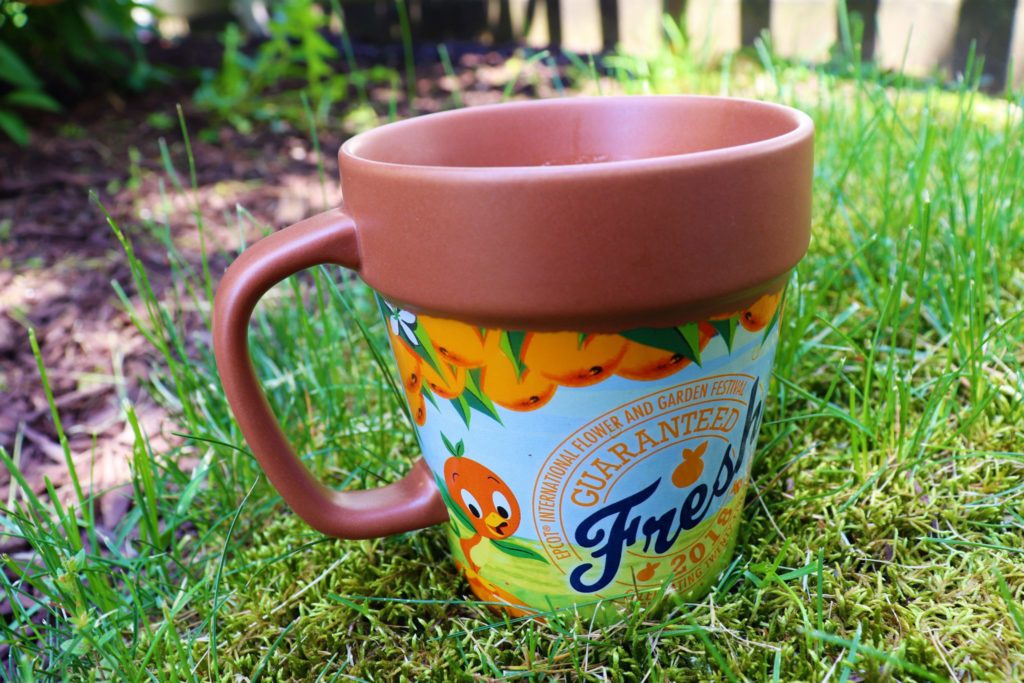 Two cute orange bird mugs are also in my collection! (Though I keep them with all of my Disney mugs and not displayed on my orange bird shelves). Yes, as you can tell from this post, I bought a lot of Flower and Garden merchandise this year because so much of it featured my orange bird!  I love this mug too because it looks like a little flower pot. 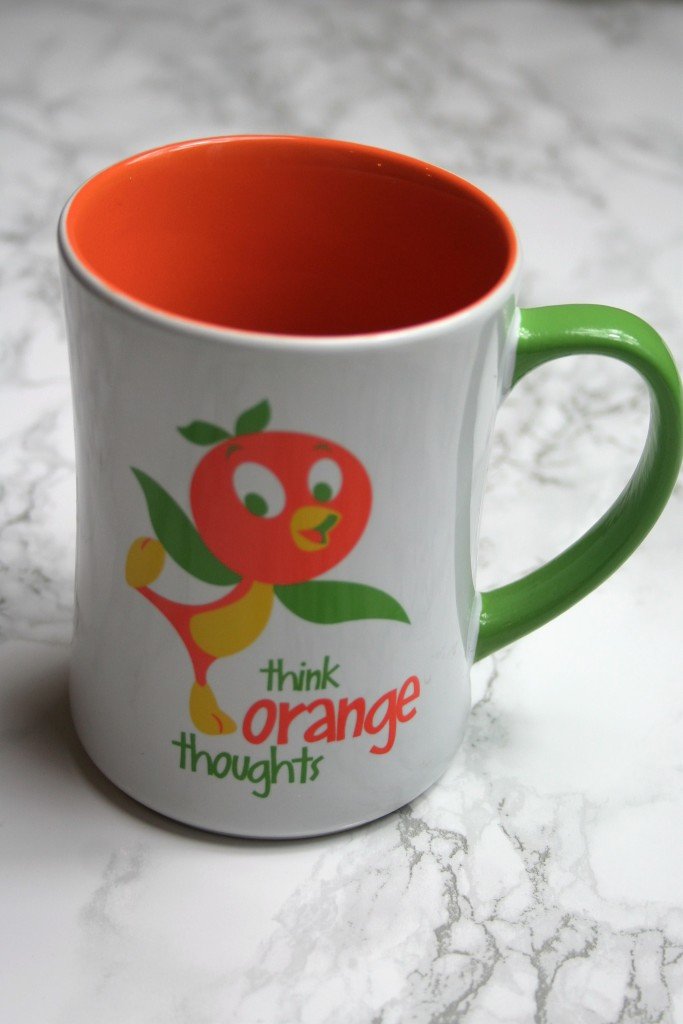 The other mug I have is this one that says “think orange thoughts.” On the back it has just his head and the words “orange bird”.  I really like how it has a green handle and is orange on the inside!

It’s possible there are a few more random orange bird things around my house, but for the most part this is my collection!  And I imagine it will also grow as time goes on.  Love that orange bird!

What’s your favorite item in my orange bird collection?