You are here: Home / Disney Cruise Line / Mixology class on the Disney Magic

Disney Cruise Line offers a number of drink classes, where you can learn about a certain type of alcohol and try different kinds in a sort of tasting.  It’s an extra fee that you need to sign up in advance for (and you can do that either online ahead of time or once you’re on board). The most popuar one, however, is the mixology class – which not only lets you try a number of mixed drinks, it also gives you an opportunity to make some of them yourself!

I definitely recommend signing up for one ahead of time if you’re interested, because they do fill up quickly. I had joined a private facebook group of people on our sailing, and they organized a private mixology class just for our group – you can organize this with Disney if you have enough people. Ours was at 2:00 on the day we were in Nassau, which worked well since we weren’t planning to get off the ship that day anyway! 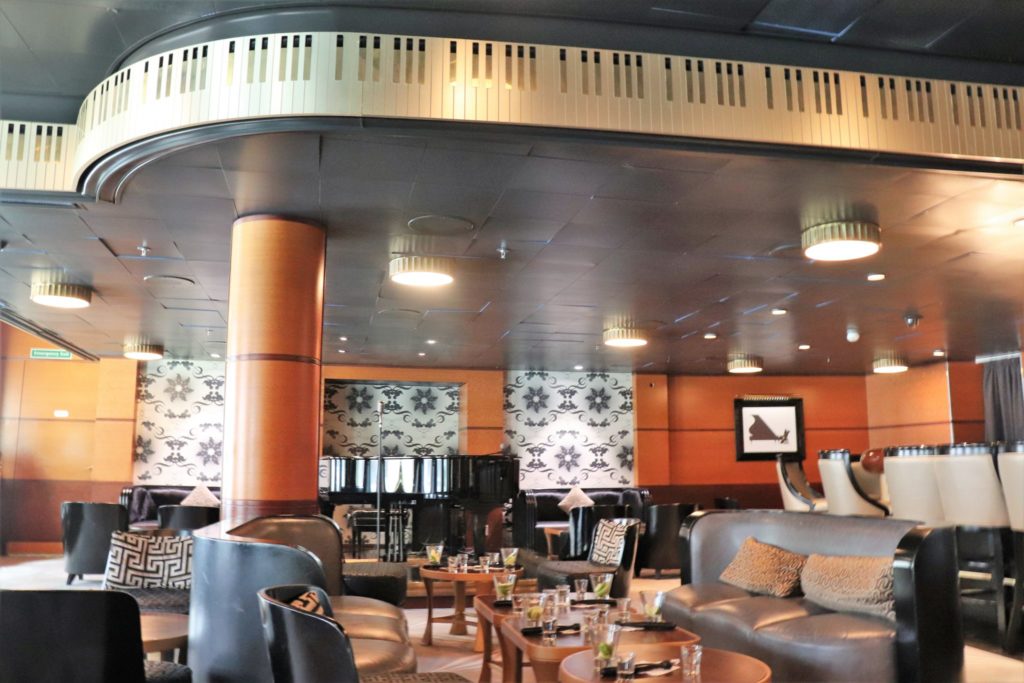 We met in Keys, the Piano Lounge, where they started by talking a bit about what mixology is – she liked to define it as “the art of mixing drinks.”

The first beverage that we tried was pre-mixed, and she had us taste it and try to guess what ingredients was in it.  It was really tasty and I have to admit that I was proud I was the only person able to name orange liqueur as one of the ingredients! Then again, I’m a big fan of orange liqueurs, so I was not surprised.  I don’t know if I should be proud of my knowledge of alcohols though, haha! 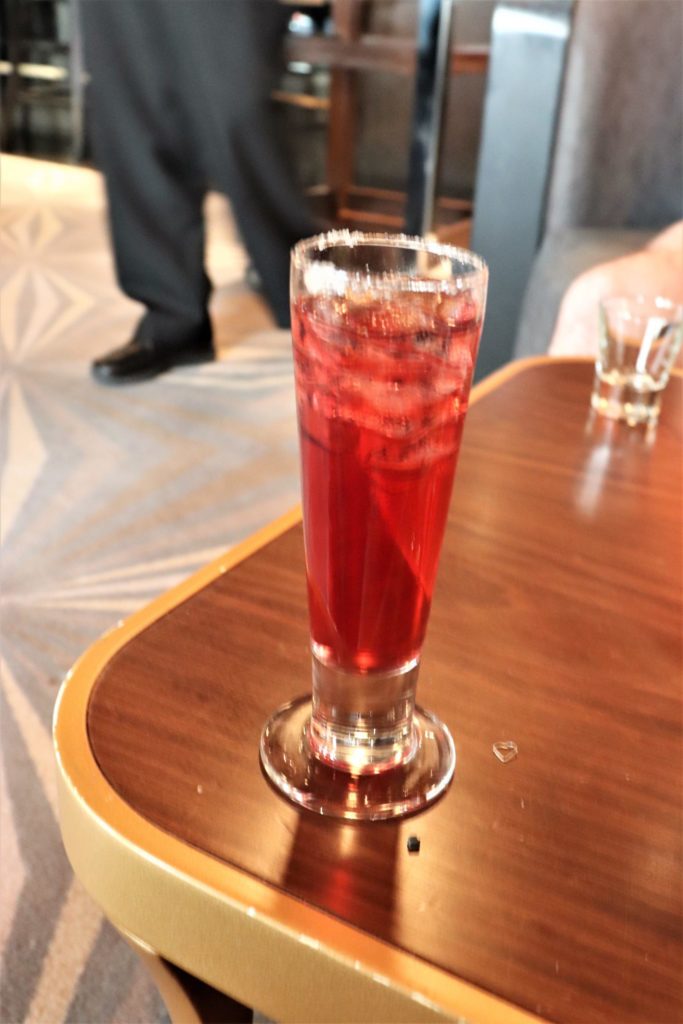 This one turned out to be called the Double Crown, and it’s served in Lumiere’s restaurant.  It was delicious, and probably one of my favorite drinks of the cruise (and we all ordered it the night we dined in Lumiere’s!).  It’s made with cranberry juice, lime juice, orange liqueur (Patron orange), sugar, Crown whiskey, and Chambord black raspberry liqueur.  In addition to telling us about how the drink is made and what’s in it, she shared some fun information and background about the alcohols involved – including fun facts like that Crown whiskey has that name because it was created for the Queen.

Drink #2 was brought out to us as well, and this was a pretty straight forward one called Kir Royal.  It was a combination or prosecco and creme de cassis (a black currant liqueur). It was pretty good but nothing that really stood out to me. 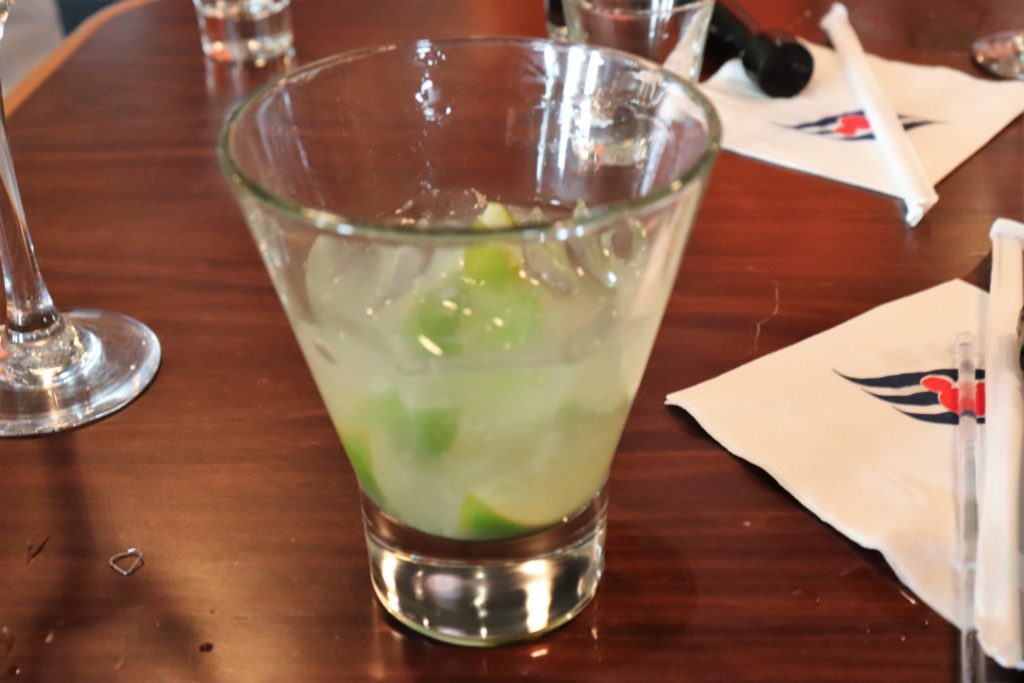 Up next we had our first opportunity to mix a drink ourselves! This was a Caipirinha.  We started by muddling limes and sugar, and then pouring the alcohol (Leblon Cachaca) over ice.  Caipirinha was one of those drinks that I’d heard about but hadn’t tried, so I was glad to get the opportunity.  It was good but a bit strong for me. I’m not a huge lime fan, and this one obviously is basically just lime and alcohol. 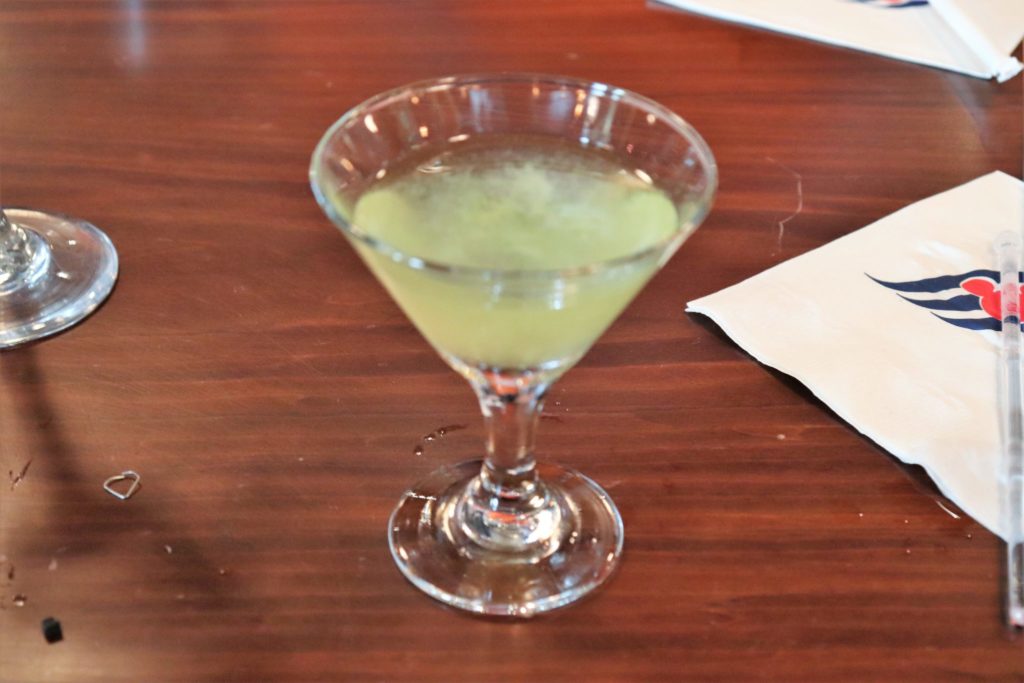 Our 4th drink they brought out to us and told us it was a specialty drink served only in Keys.  You couldn’t order it anywhere else on the ship because only the bartenders in Keys knew how it was made. Jason and I made a point to come back to Keys one evening and order this because it was a good one! It was called the Golden Triangle and was a lemon martini. It had simple syrup (agave), limoncello, triple Sec, and fresh squeezed lemon juice. Sweet and delicious. 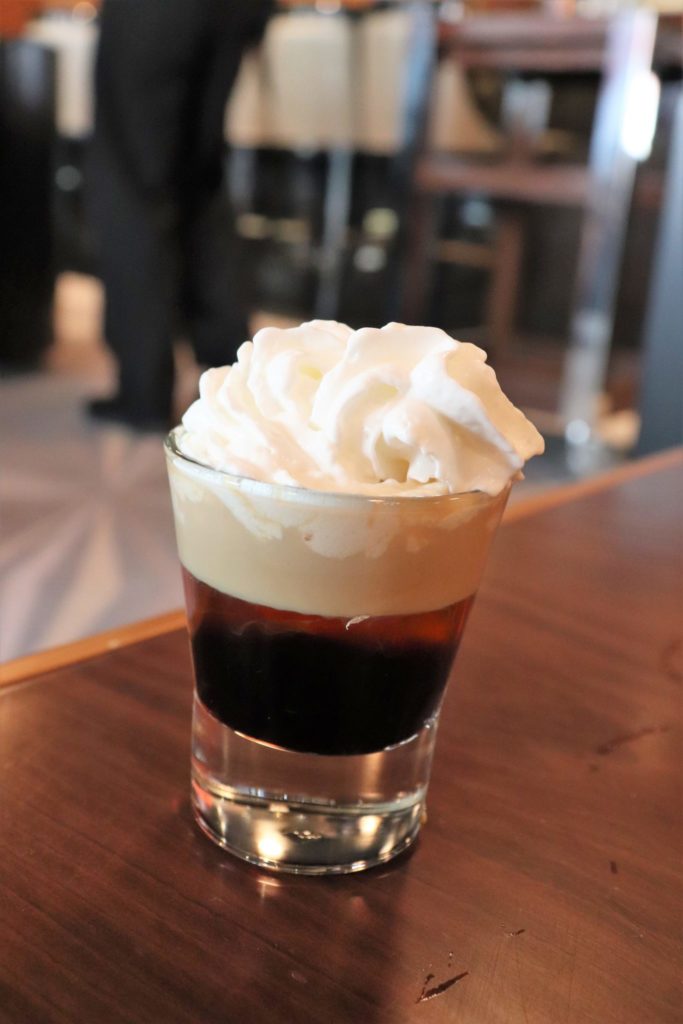 For our last drink in the mixology class we got to do it ourselves again, and this was a more complicated layered one.  It was called Kissed with Love, and was layers of Kahlua, Disaronno Amaretto, and Bailey’s, then topped with whipped cream.  You had to be careful making it because the glass and bottle had to angled correctly to get it to layer. Then after we made it she challenged us to try and drink it without using our hands – that was a messy but fun challenge!

All in all I really enjoyed the mixology class. I didn’t realize we wouldn’t be making all of the drinks ourselves, but it was still a fun time and I got to try things and learn a lot. I’ve heard people say that the drinks are really strong and they would get pretty drunk off of Mixology, but I will say that was not my experience.  They are tastings, not full size drinks, and maybe I walked away with a little buzz but I certainly wasn’t stumbling, haha. I’m sure everyone’s experiences will vary on that.

If you’re interested in mixed drinks I highly recommend signing up on your next Disney cruise!  I felt the $20 price tag was definitely worth it for what we received.

Which of these drinks sounds the best to you? Would you want to attend Mixology on a Disney cruise ship?