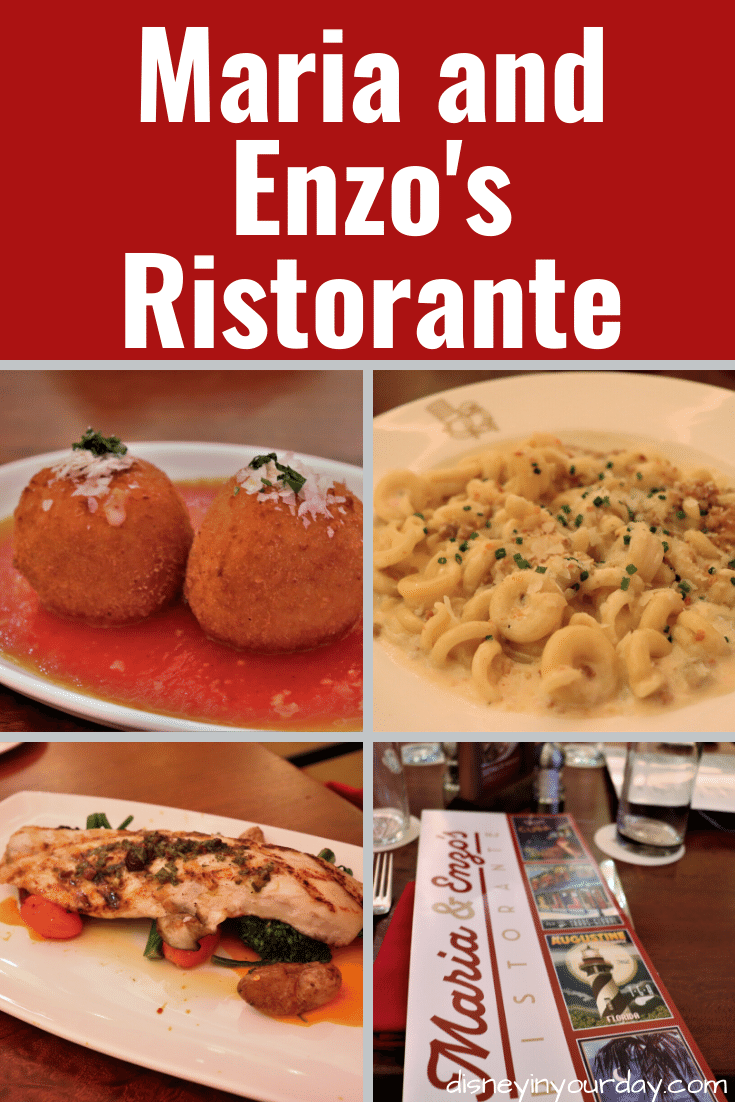 I love to run. I believe one of the reasons is because it means I can eat large amounts of pasta before a big race without feeling guilty. I know there is some mixed information out there about whether or not “carb loading” actually works, but I’ve found that it is good for me. Pasta sits well in my stomach and having it the night before keeps me full enough without needing to eat too much the next morning when my stomach is more sensitive right before a run. So Maria and Enzo’s Ristorante was a great choice for a recent RunDisney trip!

Whether you run or not, pasta is great and I love trying all of the Italian restaurants in Disney World. Since I did the Dopey Challenge earlier this year I made it a point to get pasta 4 nights in a row. There have been some new places that have opened up in the past couple of years, including Maria & Enzo’s Ristorante in Disney Springs. Jason and I made a reservation here for the first night of our trip. 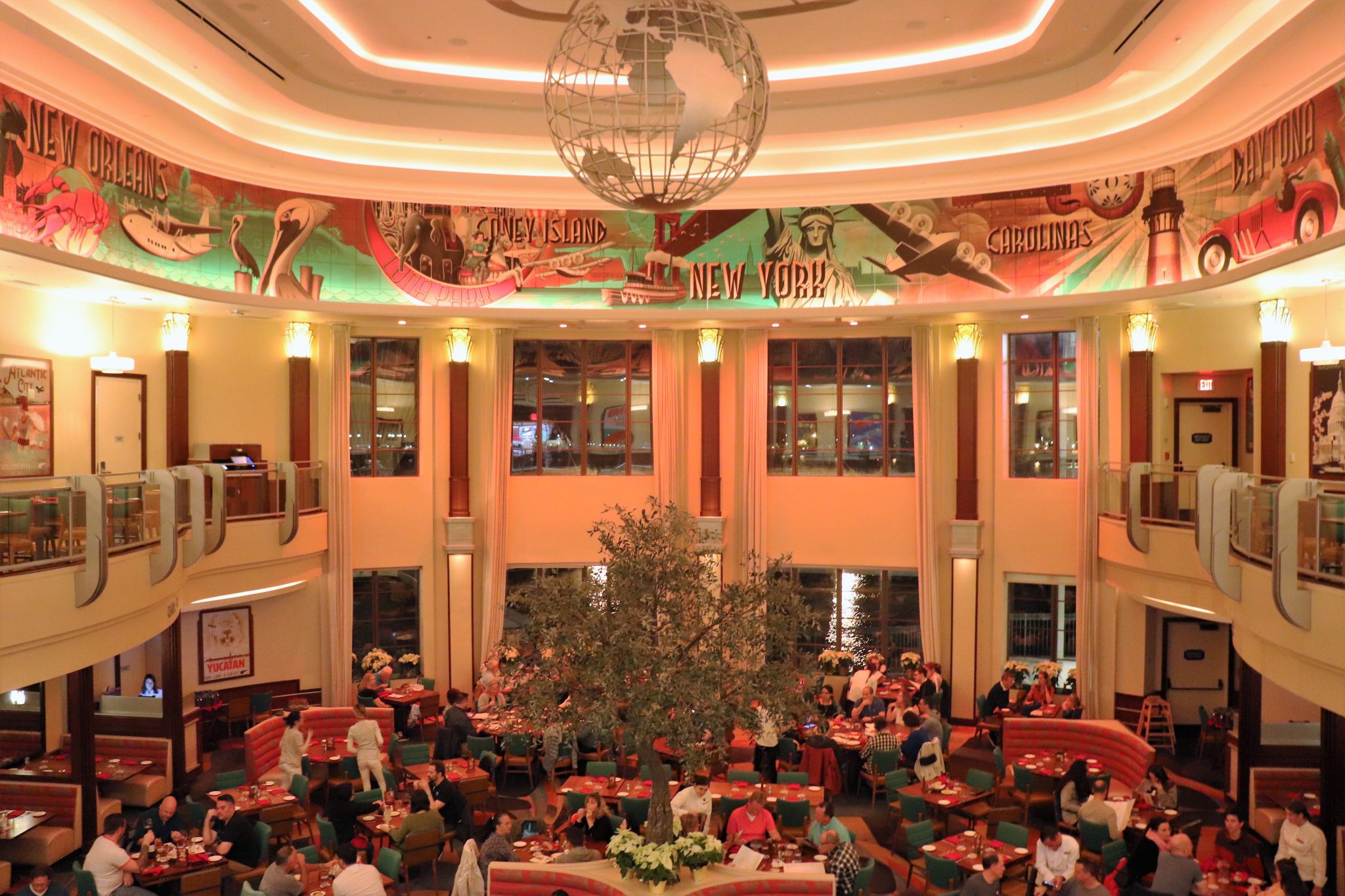 It’s a large space, and what I didn’t realize before I ate there was that they have some fun dinner entertainment too! While we ate we were treated to a traveling violin player who came from table to table and took requests for songs. I think one of the highlights he did was a Star Wars medley. Then there was a stilt walker who came around and made balloon animals for anyone who wanted one! I got a giraffe. This was an “extra mile” sort of thing I wasn’t expecting but made dinner so much more fun! I think it would be great for kids too for this reason. 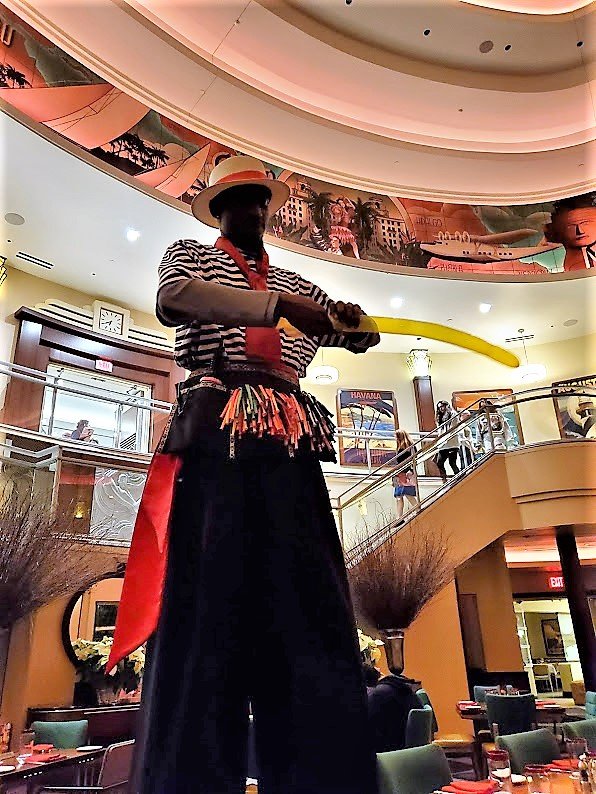 But now onto the food! They brought us a nice basket of bread to start the meal, which I appreciate since I am trying to carb load and I know some places have cut back on free bread service. We didn’t get any drinks this time since I was running the next morning but it looked like they had a pretty nice wine and cocktail menu. 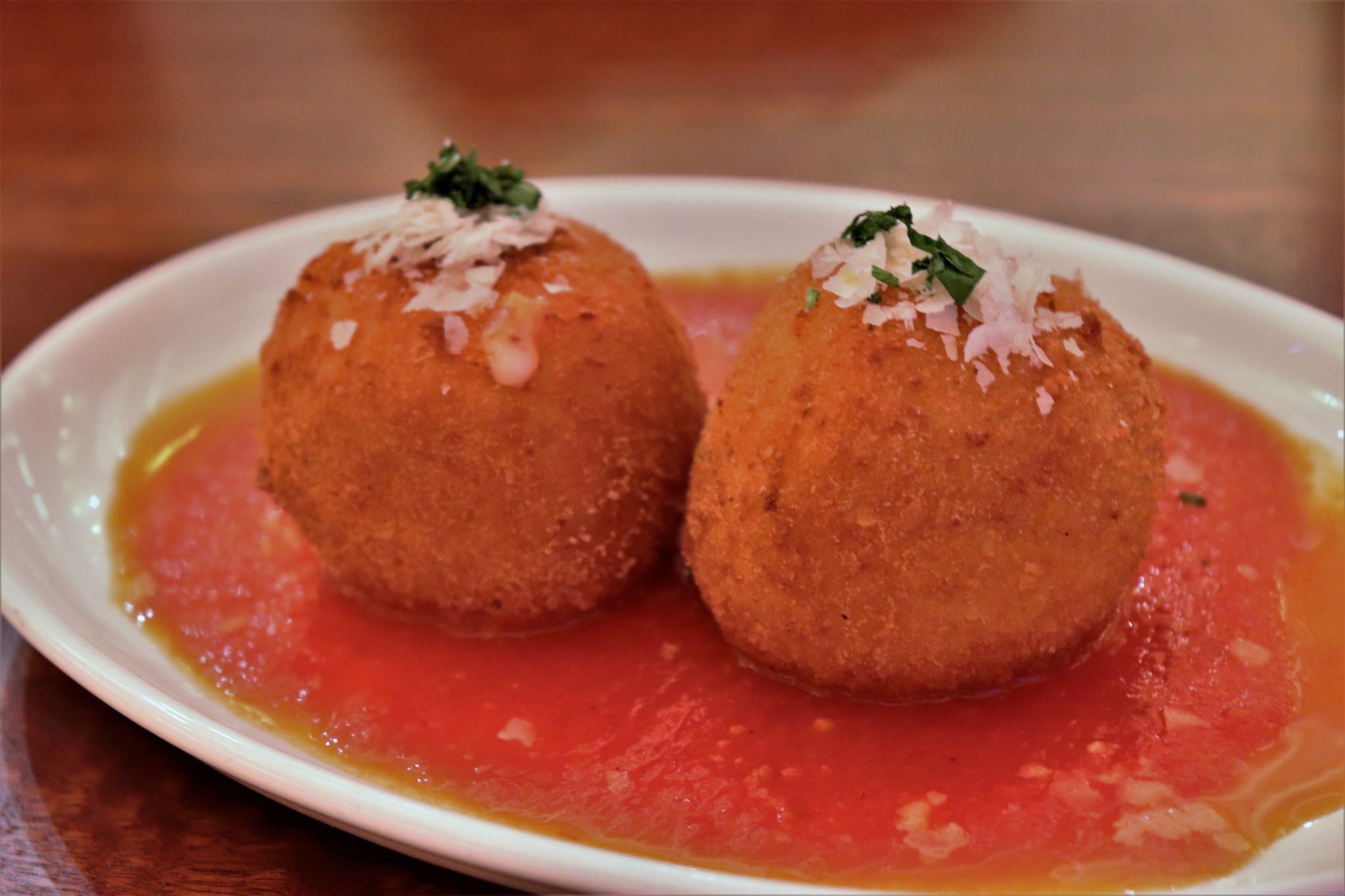 I’m a fan of arancini in general because it’s fried rice balls with cheese. It’s usually served with marinara sauce. These arancini were delicious, huge and with great crispy breading, but the sauce highlighted them really well. The sauce was fresh and flavorful.

Then on to the main courses! Of course I got a pasta dish, and while there were a few I was debating between I went with the Torchio al Pollo (Spiral-shaped Pasta, Roasted Chicken Ragù, Toasted Garlic, Parmesan Cream Sauce): 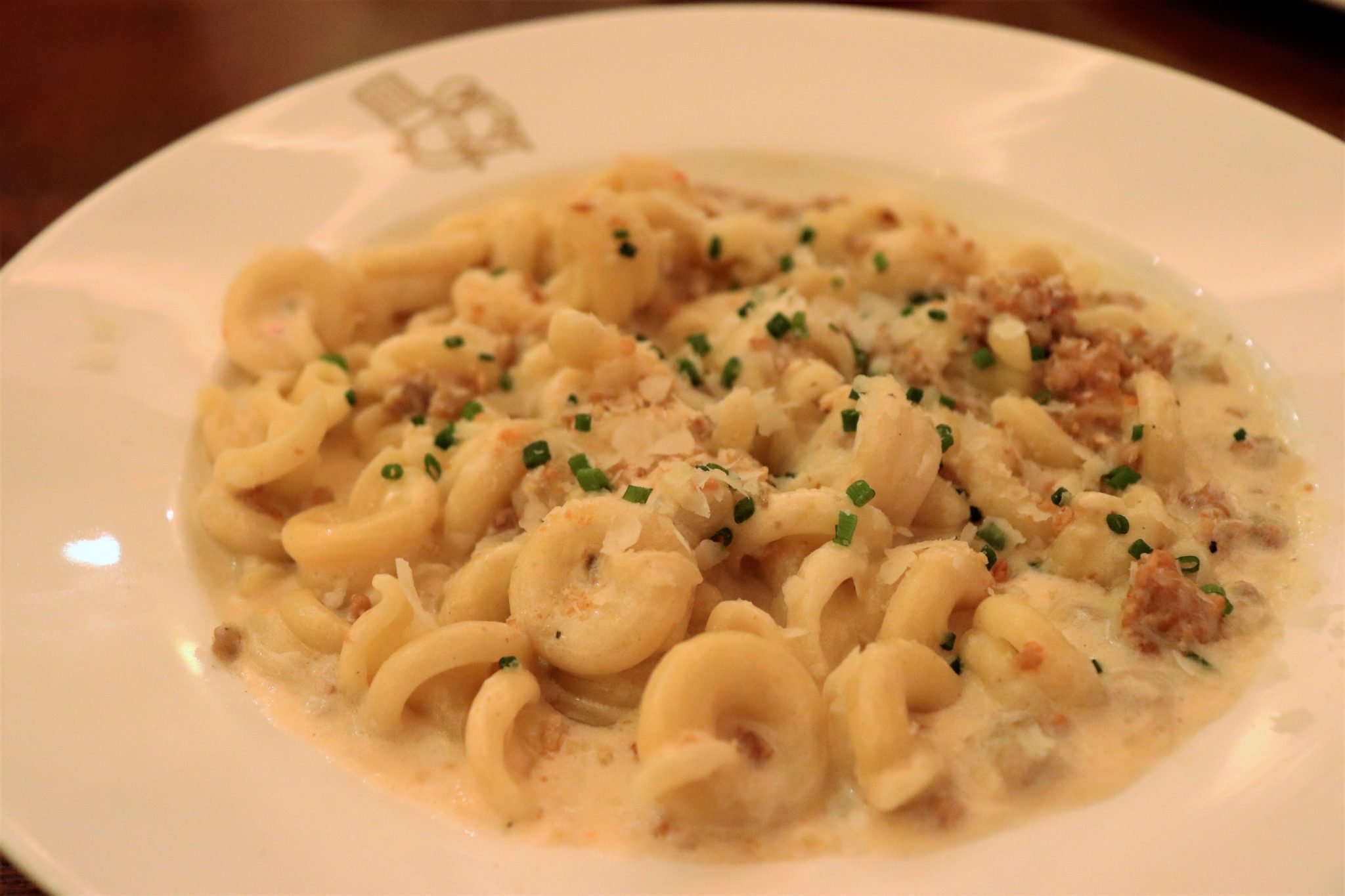 This is one of the best pasta dishes I’ve ever had. The chicken ragu was delicious and the parmesan cream sauce was just rich and heavenly. I still think about this dish when I’m craving really good pasta. The waiter recommended it as his favorite and I’m so glad he did. It’s a little bit different if you prefer the typical spaghetti and meatballs with red sauce, but if you enjoy a cream sauce I highly recommend this. 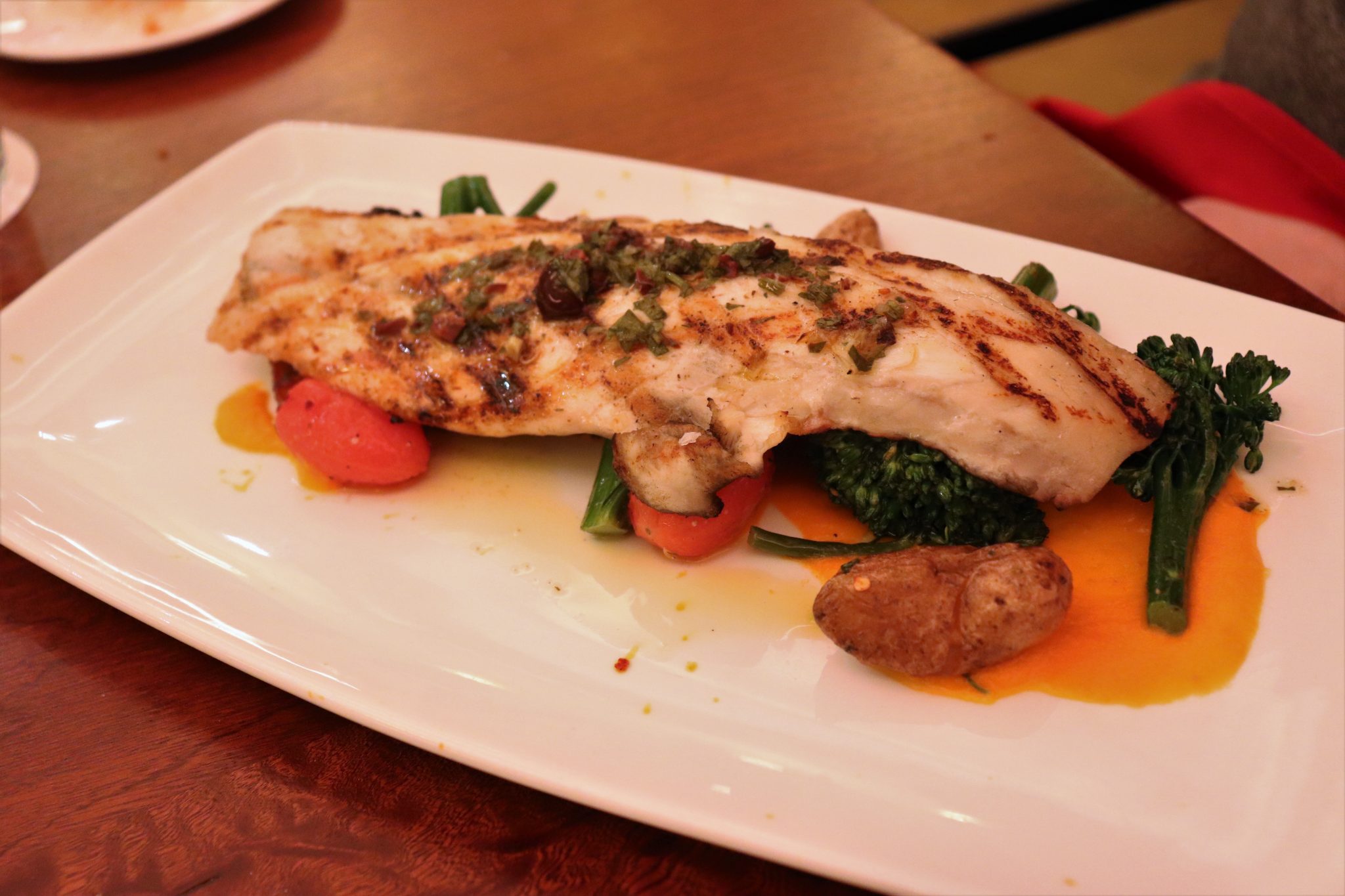 He was in the mood for fish and this was the main fish option. It was a really large piece of bass (it might be hard to tell from the photo but it was on a huge plate), and the accompaniments went well with it. Whatever they did to those potatoes was particularly delicious! He was very happy with his meal.

We passed on dessert as we were so full from all the tasty food we’d already had.

I hadn’t heard all too much about Maria and Enzo’s, but I was really impressed with it! Between the fun entertainment and the delicious food it’s a place I definitely want to come back and visit more often. With this and Toppolino’s Terrace (review to come soon!) I now have 2 great new pasta options for pre-race meals!

Have you been to Maria and Enzo’s Ristorante? What did you think of it?