You are here: Home / Budget / Is Disney just for the rich? 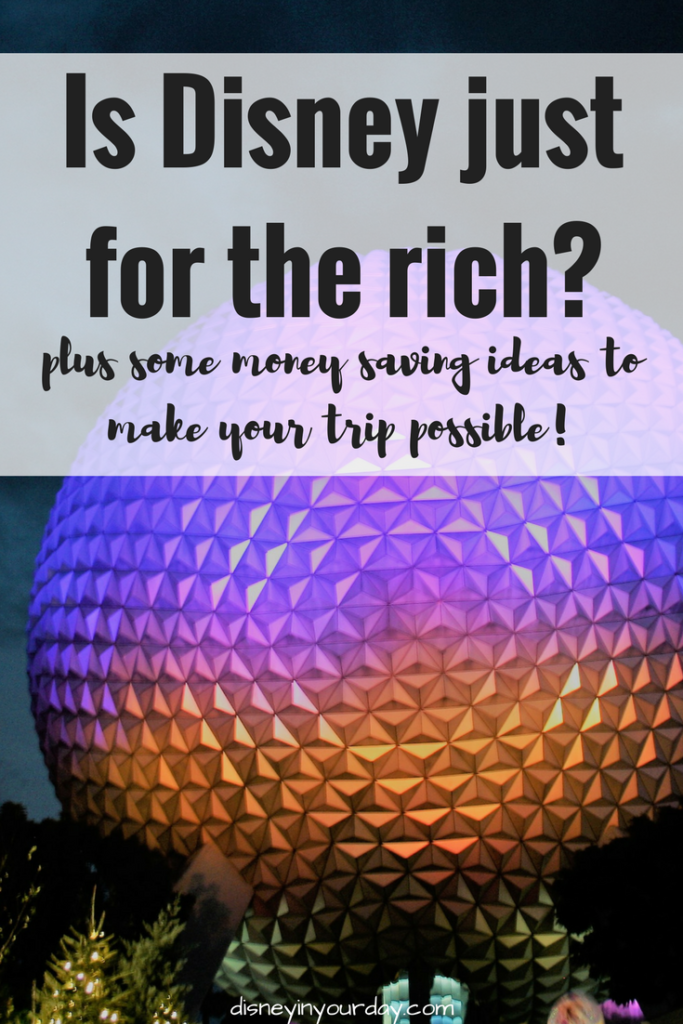 Last weekend Disney raised ticket prices once again.  It’s easy to say “oh, it’s only by a few dollars.”  While that is true, those “few dollars” seem to be adding up into quite a lot of money over time. It certainly has me thinking – is Disney just for the rich now?

This blog post from My No Guilt Life has a great list of all the new, current prices of tickets for every ticket type.

The increase in ticket prices is tricky because there is no real alternative when it comes to park tickets. Whatever Disney is charging, you have to pay. There’s no option of a cheaper hotel off property, or bringing your own food or splitting meals. While websites like Undercover Tourist might offer a few dollars off tickets, there aren’t any “real” or major discounts.

The key in the past has always been to stay for multiple days. A 1 day ticket costs more because Disney wants you to take a longer trip, so as you add on more days the price per day becomes less. It used to be a real bargain to do 3 or more days. Now you won’t see significant savings unless you’re getting 5 or more park days.

The cost for a family

Let’s take a look at the price for an “average” family to go to Disney World right now.  Perhaps we’ll say that this is 2 adults, 1 child age 7 and 1 child age 11. Remember that children 10 or older pay adult prices.

But wait, are you thinking you want a park hopper pass? That’s an extra $75 per ticket – or for our hypothetical family, it brings it to a total of $1,917 with taxes.

That’s almost $2,000 just for theme park tickets.  We haven’t even looked at resorts/hotels, transportation, or food yet.

Prices compared to 10 years ago

To those that say “it’s just a few dollars” – it’s easy to make that assumption when looking at 1 day tickets. The prices for an adult for a 4 day base ticket was previously $350, so that went up $30.

And let’s look at what it cost to go to Disney 10 years ago. Those same 4 day base tickets were $219 per adult and $178 per child.  Our family of 4 was looking at $835 for 4 days in the parks pre-taxes.  The $1500 in 2018 is getting pretty close to double the amount in just ten years. And I’m willing to bet that even with inflation, our salaries and incomes, etc. didn’t double.

What’s a “normal” amount to spend on vacation?

This question is obviously very personal and will vary greatly depending on your family’s situation. I did some research and according to a Forbes article in 2014, “the average vacation expense per person in the United States is $1,145, or $4,580 for a family of four.”  So let’s assume $5,000 for a family of 4 now.

I don’t know if you fall into that category of spending for an annual vacation. If you’re looking to spend $5,000 then Disney is still very do-able.  But as a travel agent I get a lot of people who have budgets between $2,000-3,000… and at this point it’s very hard for me to be able to send some of these families to Disney when you factor in tickets, hotel, and airfare.

Annual passholders were hit pretty hard too, with a 9% increase (going from $779-849). This is for the Platinum Annual Pass, which is the cheapest one you can get if you’re not a Florida resident, like me.  As an annual passholder the $70 increase definitely sucks.  I am very fortunate to say that despite that increase I can still afford it and still go multiple times a year.  An annual pass is most definitely a privilege, and I can understand why Disney would raise the price so much – the people most likely to buy an AP are the ones who are most likely to be willing to pay higher prices to keep coming back.

Ways to save money

Even when prices for tickets are so high, there are still ways to save money. It just might not be as much money as it used to be. Here are some thoughts:

So, is Disney just for the rich?

I’m going to say no, though it’s clearly for at least the middle class. Though I suppose it’s kind of always been that way, as is being able to take family vacations in general.  When I started writing this post I thought my answer to this was going to be yes, that Disney is catering more to the rich.  But if that $5,000 number is accurate for a family to spend in a year for a trip, then Disney is still very much within that range and less.

And at the end of the day, Disney is going to raise prices because they can and because the demand is there. The parks have been more crowded than ever, and there isn’t really a slow time anymore.  With Toy Story land, Star Wars, and a Guardians of the Galaxy attraction coming, it’s only likely to get more crowded.  Raising prices may also be their way of getting a handle of the massive amounts of people coming.  If people continue to be willing to pay for Disney, they will keep raising the prices.

Do you ever feel like Disney is just for the rich?  How much do you budget for vacation?