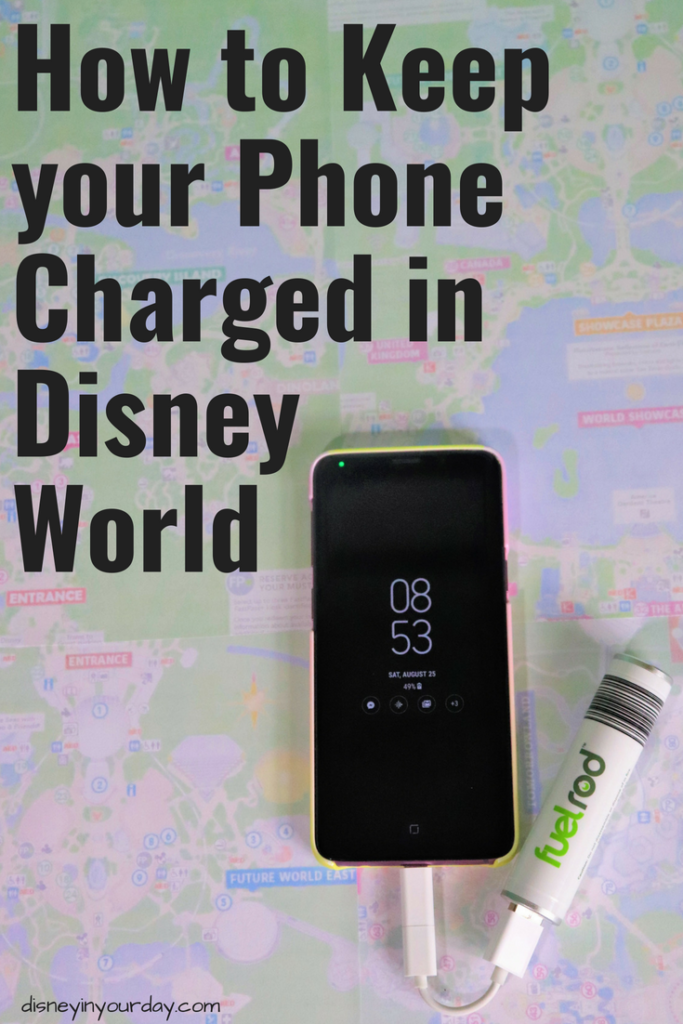 In the past 7 years, ever since I started visiting Disney World regularly, the way we approach the parks has changed dramatically. When I honeymooned there in September 2011 I owned a flip phone that was definitely not a smart phone.  I hardly used it at all – perhaps a few texts to family and friends, but that was about it. I carried a small point and shoot camera to take photos, and then uploaded them all to facebook upon my return. Before Disney World Fuel Rod, I didn’t really need to worry about my phone.

Slowly things started to change. I got a smartphone right before a trip to Disney in February 2013 (I was pretty behind the curve, I know a lot of people got them earlier). Now, for better or for worse, we’re pretty glued to our phones. Even in a magical place like Disney, where I want to just soak it all in, I use my phone a lot. I do a lot of solo trips so it’s nice to keep in touch with Jason and my other friends and family in “real time” by sending them photos. I can keep myself entertained while waiting in line, or dining solo.  And Disney encourages the use of a smartphone in multiple ways. Use the app to make your fastpasses, check your reservations, and monitor wait times. Even more recently they’ve created the Disney Play app with games and interactive activities for while you’re in the parks. 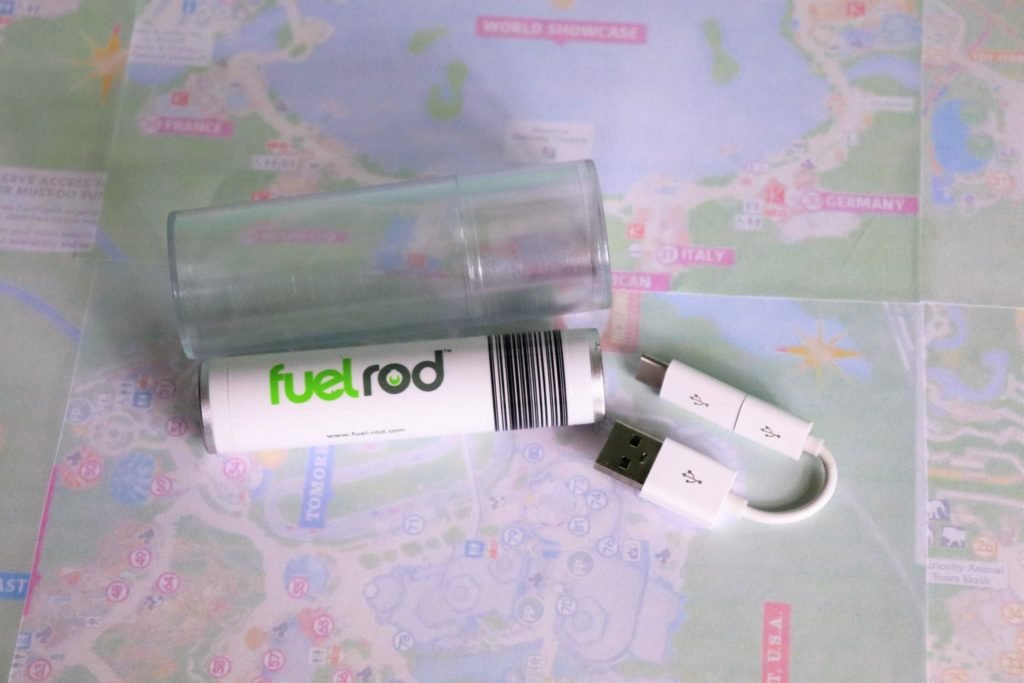 As a result of all of this phone usage your battery can drain pretty quickly! I know a lot of people carry a portable charger with them on a daily basis, but even if they don’t in normal life they will in the theme parks. For awhile I had a large, heavy duty portable charger. It was great, but it was also heavy and it broke after about a year. For the price of it, that wasn’t the best option.

Enter Fuel Rod. If I was just recommending a portable charger to buy off of Amazon or something, or bring with you, Fuel Rod may not be my first choice. But it has one strong advantage that other portable chargers don’t have: the exchange machines all around Disney World.

When your Fuel Rod runs out of power, you can exchange it for free at a machine to get a fully charged one. It’s a really easy process. You hit the “swap” button, deposit your Fuel Rod in the machine, and new one pops up. It takes less than a minute. And there are machines in multiple places throughout the parks. Most of the parks have a few of them around, and we saw them at the resorts too. 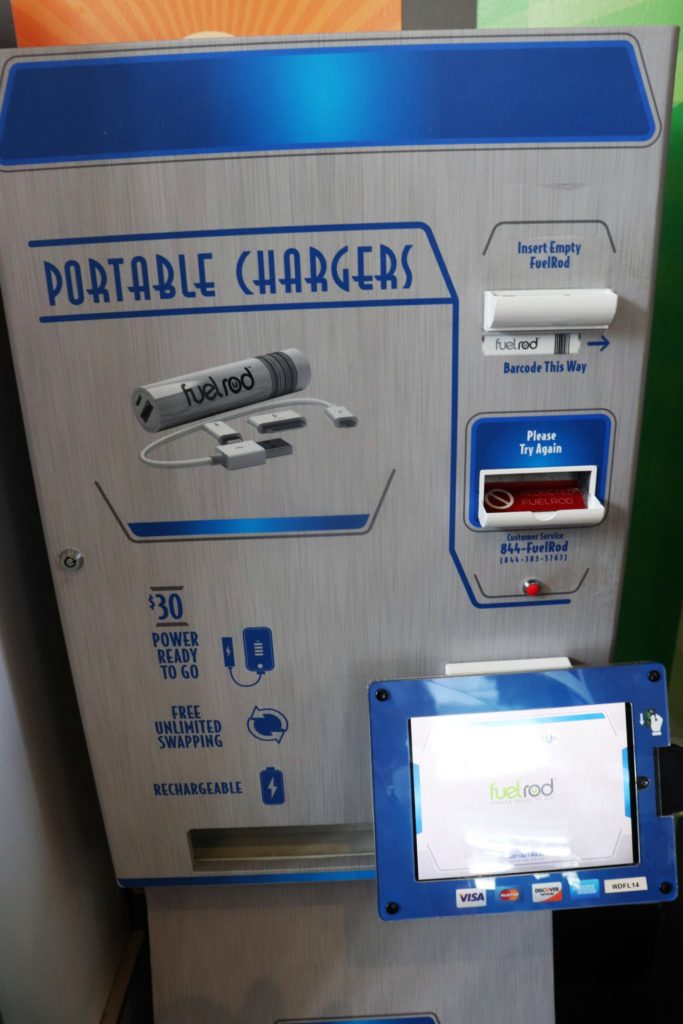 Fuel Rod works fine. I’ve heard people say it’s awful, and if you didn’t have the ability to swap practically anywhere in Disney I might agree. It never got my phone to a full charge (maybe from 15% to 70%), but it doesn’t necessarily matter because I can switch it out so easily.  It’s small and light and fits easily in your pocket or a bag. It comes with various cords for an iPhone, micro usb, and whatever this new type of plug my Samsung Galaxy 9 has.

You can purchase your initial Fuel Rod from any of the machines for $30. You’ll get the device itself in a small tube with the cords. After that you can exchange it any number of times at any of the locations. Not only is it a Disney thing, but we saw a machine at the Philadelphia airport as well, so I’m hopeful there will be multiple places I’ll be able to use it and swap it! And even if you’re on a trip or in a place where you don’t have a machine, you can still just charge it the way you would any portable charger. 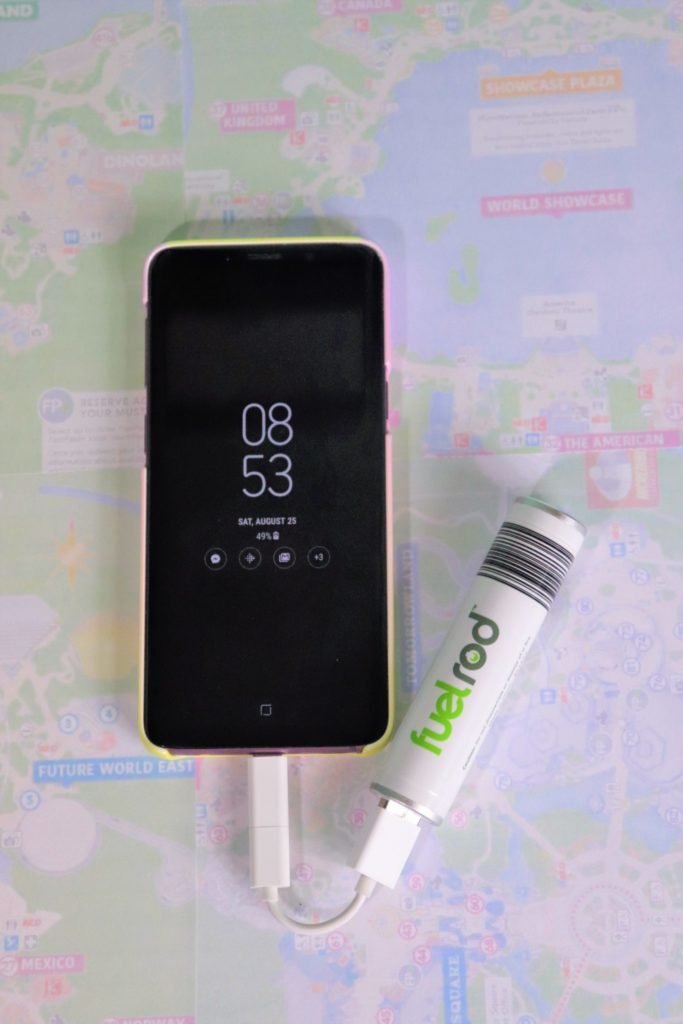 At the end of the day I still don’t want to be glued to my phone.  But I am going to use it throughout the day, and I love the fact that I don’t have to worry about the charge on my phone. It’s also one less thing to plug into the hotel at night – I don’t need to charge my portable charger because I can just get a new one ready to go!

Have you tried Disney World Fuel Rod stations? What do you think of this?