You are here: Home / At Home / Host your own Frozen party for kids! 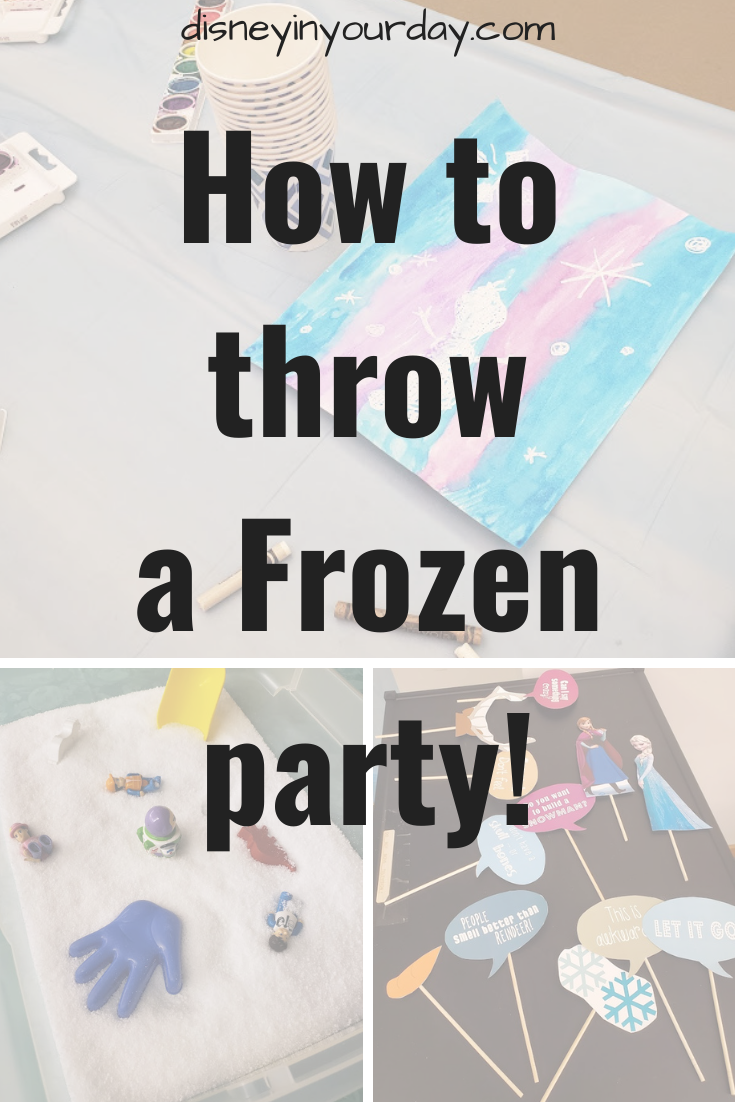 While I am very passionate about all things Disney, and there are certainly days where I wish I could be a full time Disney blogger, I actually do have a day job! I’m a children’s librarian and it’s a pretty intensive job, but a rewarding one. I get to do a lot of programming with the kids and have a good amount of freedom to do events that I think will be successful. Of course with Frozen 2 having just come out, it seemed like the perfect time to have a Frozen party!

I’ve done big family “parties” for the kids in my library in the past. Harry Potter is always a very popular one, and we did a Moana party when that movie came out. But this Frozen party was definitely the most successful one of all time! We had around 150 people total come out for it. I’m happy to share a look at some of the fun we had!

I billed it as a family event which meant that I didn’t put an age limit on it. I’d say the majority of kids there were in the 4-8 age range, which is about what I expected so most of my plans were based on that age group. I did have some options for older kids as well. 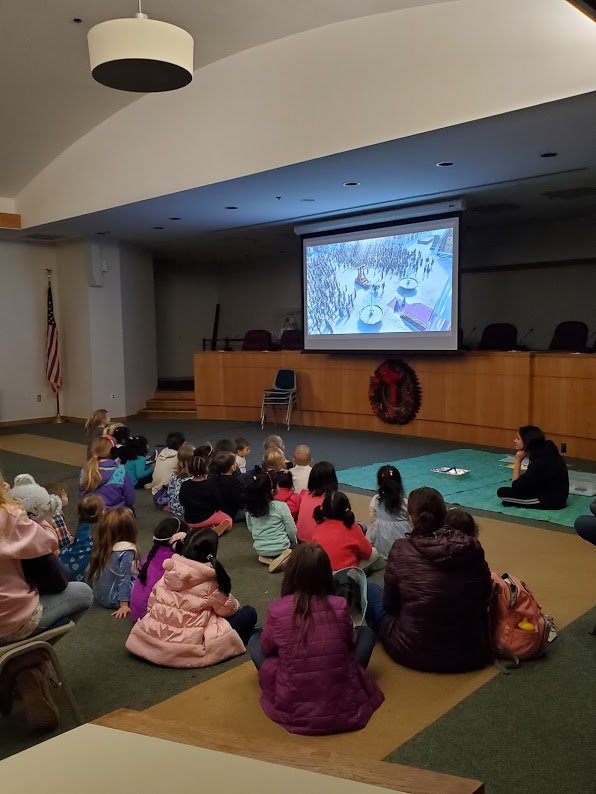 We started by watching the 20 minute short Olaf’s Frozen Adventure. I figured it would be a fun way to kick things off and would also get everyone into the room and settled before the other activities began. It’s pretty common for people to show up late but this way they could just sneak in the back and then everyone was there when I explained what else we’d be doing. The kids sat up front on the floor and parents had chairs in the back. 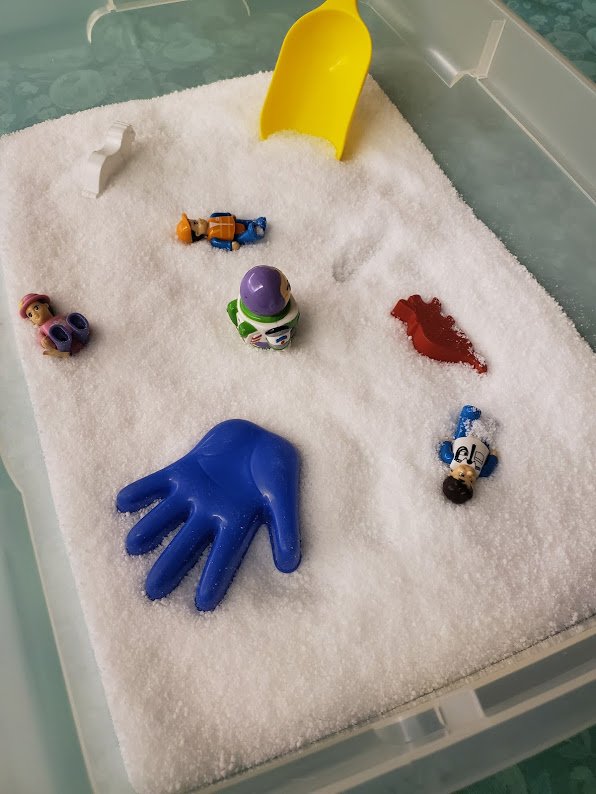 I found this really cool “fake snow” on Amazon that seemed like it would be worth experimenting with. It’s basically a powder, you add water, and it gets a snow-like consistency! It seems like there are a number of brands but the one I used was Amazing Instant Snow, which you can find here on Amazon. I just filled a couple of bins with the “snow” and some toys and let them play around. You could definitely get little Frozen figurines to stick to theme (I just didn’t have any and had a very small budget!). 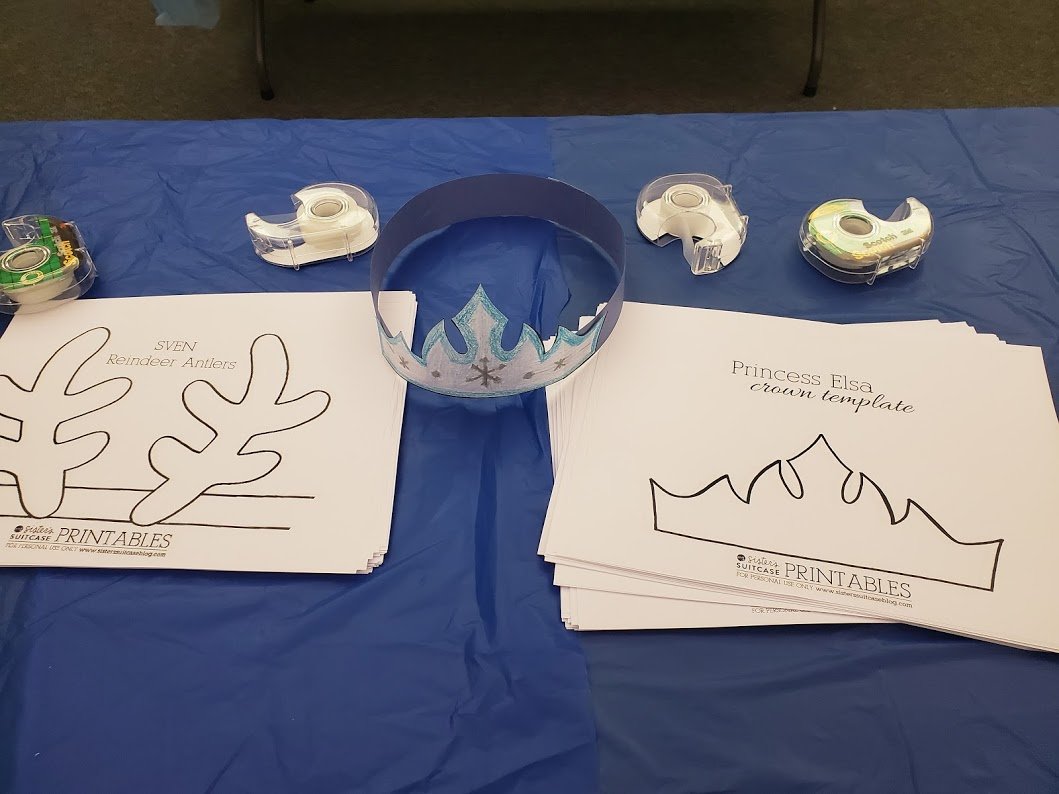 This was the more complicated of the two craft projects I had and probably good for Kindergarten+, though the younger ones still did it with the help of parents. I found these printables from the blog My Sister’s Suitcase, so the kids could choose which one they wanted and then color it and cut it out. We then had construction paper so they could cut strips and tape them on to make something they could actually wear. 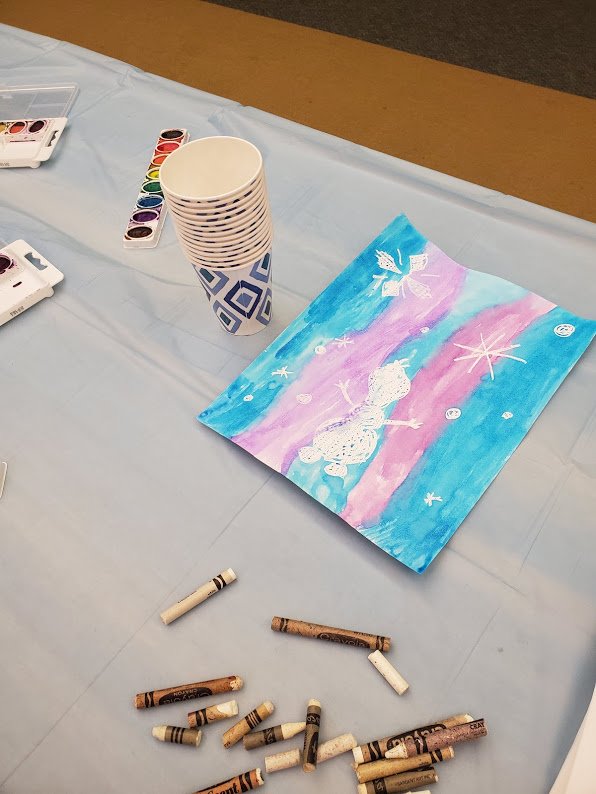 This was a great activity for all ages because it was simple enough for the youngest kids, but it was also something the older ones could really get creative with if they wanted to. I had them draw or color whatever they wanted on a white piece of paper with a white crayon first. Then they did watercolor paints over the whole sheet so their drawings would magically “appear”! 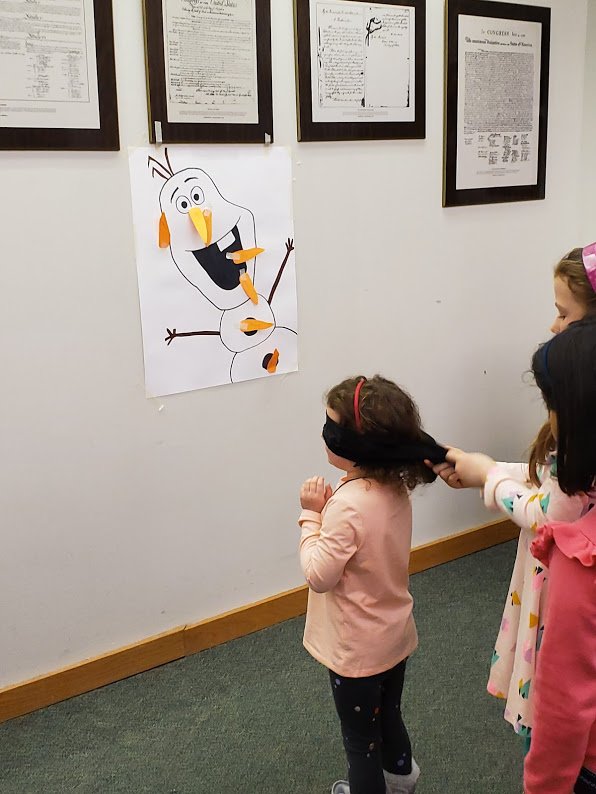 Pin the nose on Olaf

This one is pretty self-explanatory, but the kids actually got a huge kick out of it! They ended up writing their names on their carrots so they could go back and find it later and see how well they did against their friends. I drew Olaf freehand and just cut out carrot shapes from orange paper. 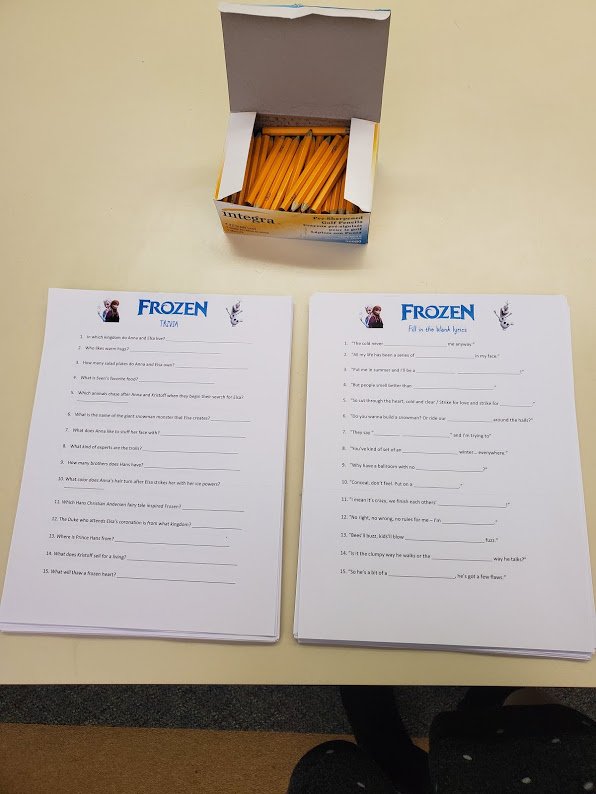 For the older kids I had two types of trivia. One was general Frozen trivia, and the other was fill in the blank lyrics. I just wrote them all out of my head – I might know Frozen a little too well! 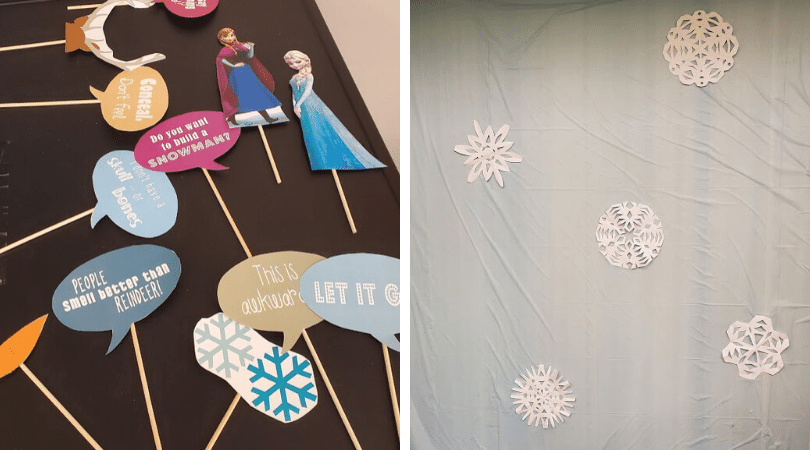 Of course you need to have some fun photos at a party, right? Especially with the kids, parents love to take photos and with everyone having a phone now, it’s so easy to just set up a quick backdrop and some props. I usually use some sort of tablecloth as a backdrop – this time I did a light blue one with paper snowflakes I made on top of it. There are tons of printable prop options for just a few dollars on Etsy, but I found these ones for free from One Creative Mommy. In addition I printed pictures of Anna and Elsa to use as well. I just printed onto cardstock and then taped a chopstick to the back! (I happen to have a bulk supply of chopsticks at work from other photobooths we’ve done in the past and because we use them as easy and cheap Harry Potter wands!). 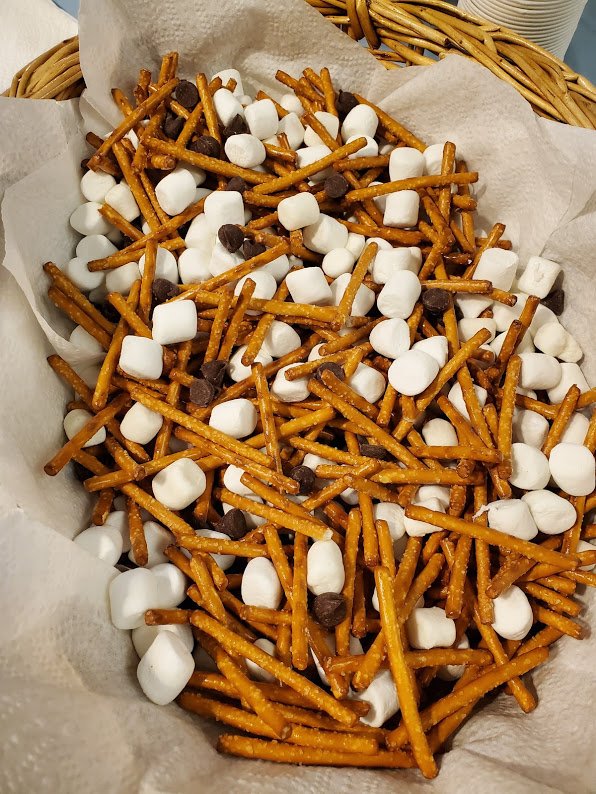 With so many people (and again, small budget) I decided to keep it simple. We had popcorn for the movie and then served a “snowman mix.” This was just a combination of pretzel sticks, mini marshmallows, and chocolate chips. The kids loved it! I was also going to do cupcakes decorated in blue and white back when I thought we’d have about 40 people, but when the registration kept growing I gave up on the cupcake idea. You could easily do it for a smaller group though! 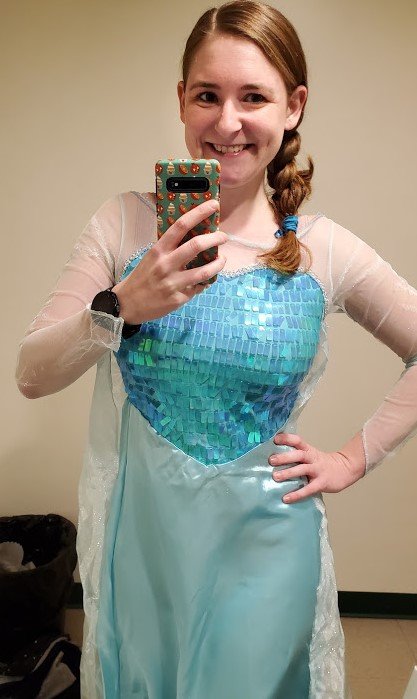 Oh, and of course I had to wear my Elsa dress! Yes, I have one in my closet. Lots of little kids came dressed up as Elsa or Anna as well, and I ended up posing for a few more pictures than I expected! But I’ll tell you, nothing makes you feel more special than when you walk in the room and all the little girls start whispering excitedly, “Look! It’s Elsa!”

Do you have kids who are really into Frozen?  Which of these activities at the Frozen party do you think they’d like the most?