You are here: Home / Other Theme Parks / Hershey Half Marathon 2016 recap 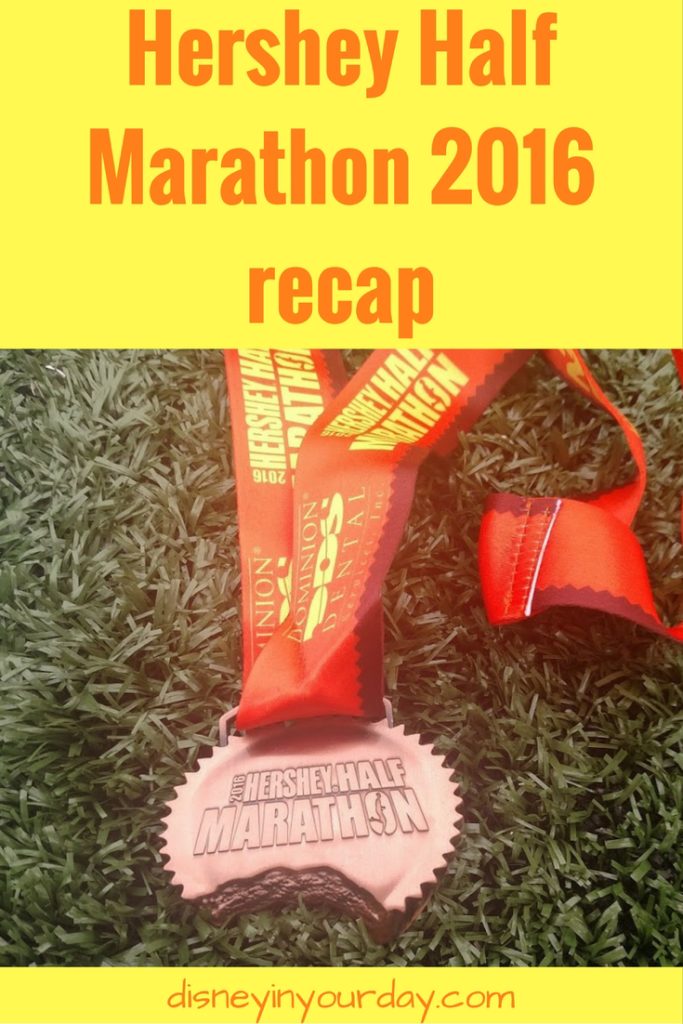 Although it’s no Disney, Hershey Park holds a special place in my heart.  It’s our closest amusement park, being only an hour and a half away.  They have great roller coasters, and of course chocolate!  And they host a 10k and half marathon every year which for some reason I always do really well on.  So once again in mid-October I found myself heading to Hershey.  We spent a great day in the parks on Saturday (two free park tickets are included with your race registration!) and then it was off to the hotel to get rested up before the half marathon. 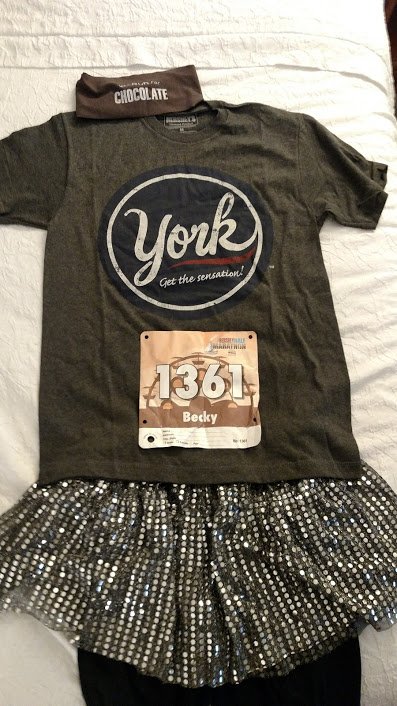 Good thing I always take my “flat Becky” picture of my outfit and get everything ready to go the night before… because as I was laying out all of my stuff I realized I’d forgotten my compression socks.  We drove to the nearby outlet mall and circled around, stopping in every store that could possibly have compression socks.  I struck out at Under Armour, Reebok, and a couple of other places, but finally found Golden Toe – a store that just sells socks!  They had one pair of compression socks in my size, as well as “performance socks”.  While those weren’t compression they offered support in other ways, so I bought a pair of each and would wear which ones felt better.  Crisis averted! 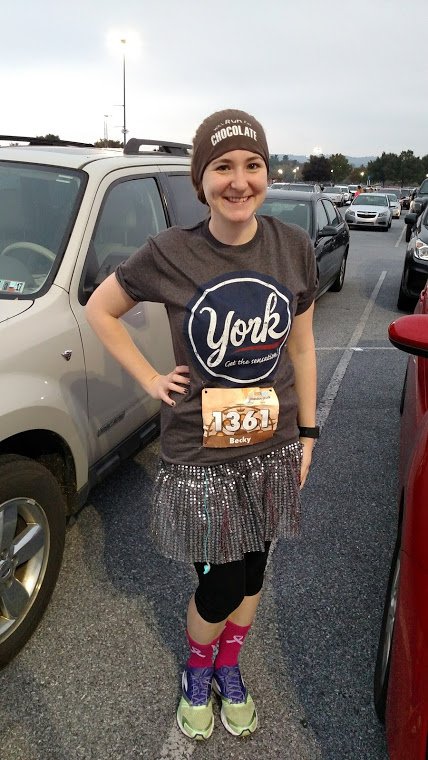 The weather the next morning was a little chilly at first, but ended up being perfect for running.  I’d put together a little “costume” as a York Peppermint Patty!  I had a York shirt and silver skirt from Glitter Skirts (use code “BECKY” to get 20% off your purchase – it’s an amazing deal!).  And of course my “Will run for chocolate” headband from Bondi Band.  I was grumpy about it being cold and wondering if I should have worn long sleeves, but once I got moving I was very thankful for the short sleeves.

We ran around the streets and parking area a little bit, but around mile 3 we were in the theme parks.  You get to travel through a good bit of the park which I like.  Unfortunately they don’t have characters for photos like at Disney, but the Jolly Ranger guy was at least out waving and giving high fives.  Then after the parks its into the more residential areas.  A lot of local people come out, which I really appreciate.  Lots of families with kids, or teenagers, so I always make sure to give them some high fives.  Some really fun and creative signs too (my favorite was “If Trump can run, so can you!”). 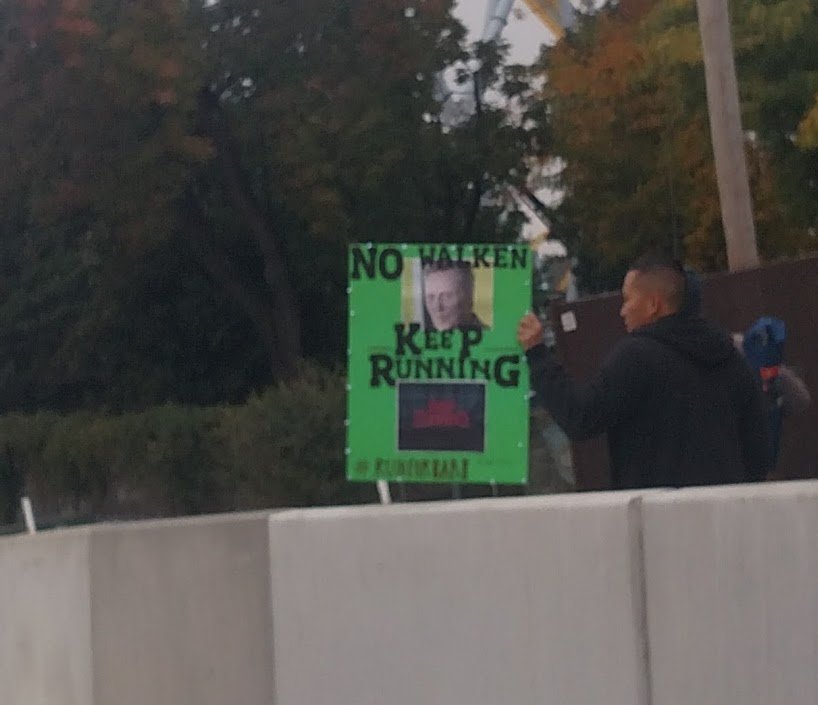 I had it in my mind that I really wanted to PR this race (personal record, if you’re not familiar), but I didn’t want to pressure myself too much.  I’ve pretty much always PR’ed at Hershey – last year my half marathon time was 2:26:41, which is a lot better than most halfs that I’ve done.  I started out with a pretty steady 10:25 pace, which was crazy good for me.  I could just tell I felt great that day.  Sometimes running feels rough.  It did at the Disneyland Paris half.  But sometimes it feels really good, like this day. 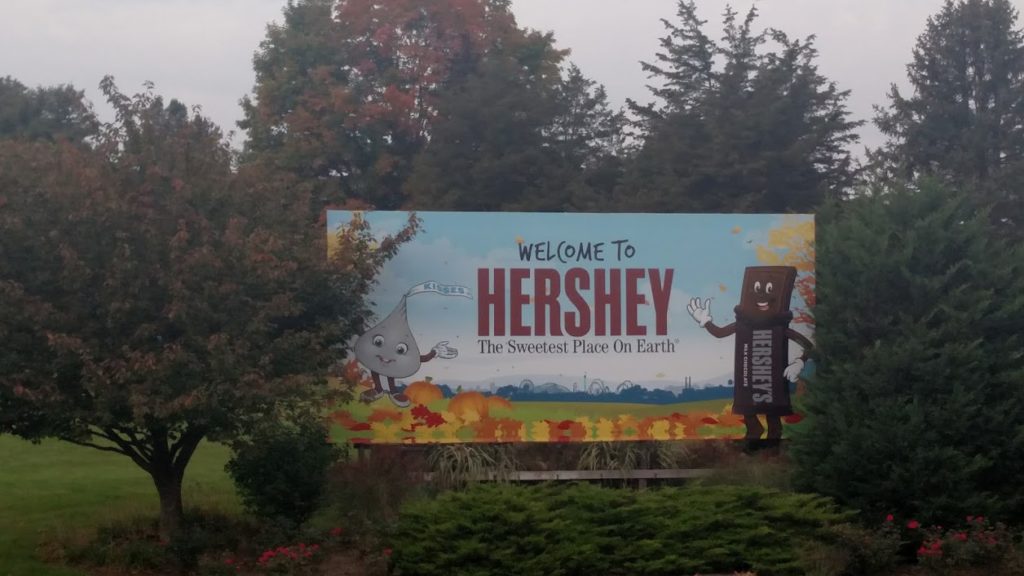 I got to the halfway point and then just after mile 7 I ran past the hotel where we were staying.  I had texted Jason when I hit the halfway point so he and our friend Kristin with us came out to cheer me on!  It’s always such a huge boost to see people you know along the sidelines cheering for you.  I stopped for a second to tell Jason “I’m at a 10:35 pace.”  He said, “keep it up!” to which I replied “I don’t know if I can!”  But I kept on.

I never really hit a wall.  I slowed down a little bit but not terribly.  The course was more hilly than I’d remembered.  I’m not surprised, given that it’s Pennsylvania and it’s pretty much impossible to run anywhere without a lot of hills, but I didn’t recall them from last year.  We passed the chocolate aid station around mile 11.  To my disappointment they only had regular Hershey’s bars.  I’m not a milk chocolate fan, only dark chocolate, which they did have last year. 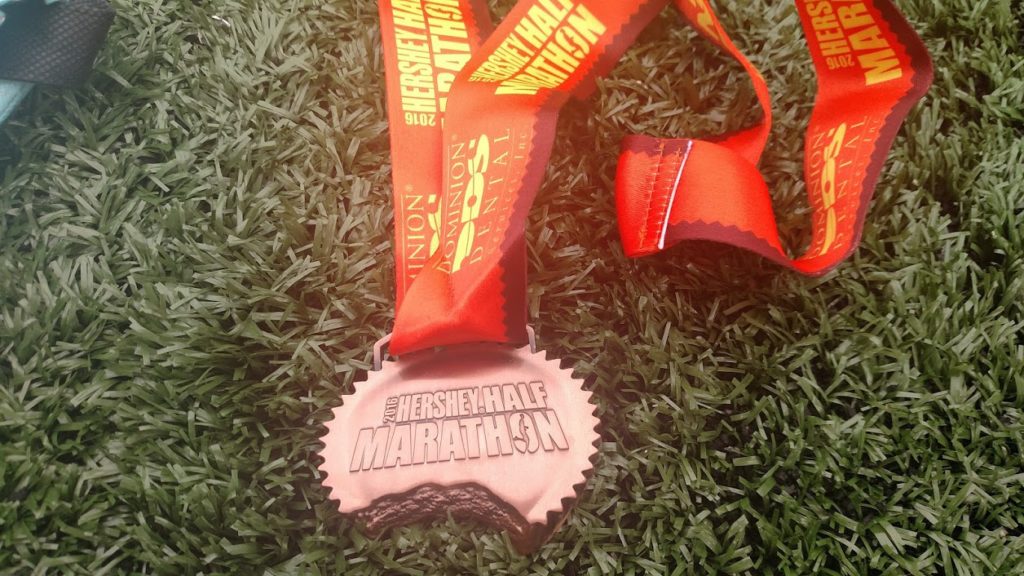 And then I was crossing the finish line and receiving the most adorable medal!  It looks like a Reese’s 🙂  My final time was 2:21:05, with a pace of 10:46.  Which really blows my mind a bit.  It’s a huge PR from last year and I’m still not sure how I did it.

And then, because I’m extra crazy, I decided to run back to the hotel rather than having Jason pick me up.  As you might know I’m training for the marathon, so I was supposed to run 17 miles that weekend.  After finishing the half I got my medal, some water, and a banana, took about a five minute break, and then ran those 4 extra miles.  And I did 17.  And it didn’t feel awful.  For the first time I ever I felt like finishing the full marathon might actually be a thing.

I love the races at Hershey and I know I’ll be back again!  Now to decide which candy to dress up as for the 10k in April…

Have you ever been to Hershey?  What costume should I do next?