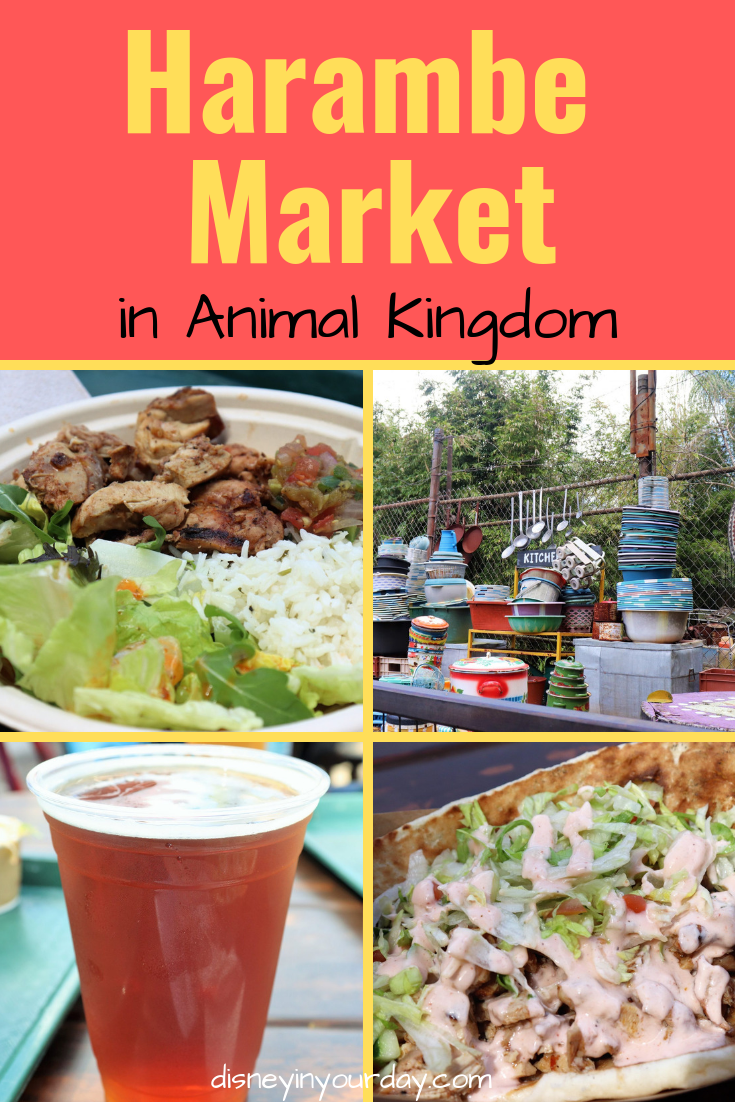 One of my favorite places to eat is Animal Kingdom. I love Tiffins for a great sit-down meal, but it is a signature restaurant so it’s a bit pricey – luckily there are plenty of other good options! If we want to enjoy some drinks I’ll do Nomad Lounge and share appetizers. For quick service I’ve enjoyed Flame Tree BBQ and my personal favorite, Satuli Canteen.  But recently I got the chance to go back to Harambe Market for the first time in awhile!

We were pretty hungry after riding the safari so this was the closest option.  It’s tucked away in the Africa section of the park. There are several windows you can order from, and while they used to offer different items at each window, you can now get pretty much everything at each spot – making it much easier to order as a group.  Disney describes the cuisine as “Soulful Street Food” inspired by Africa. 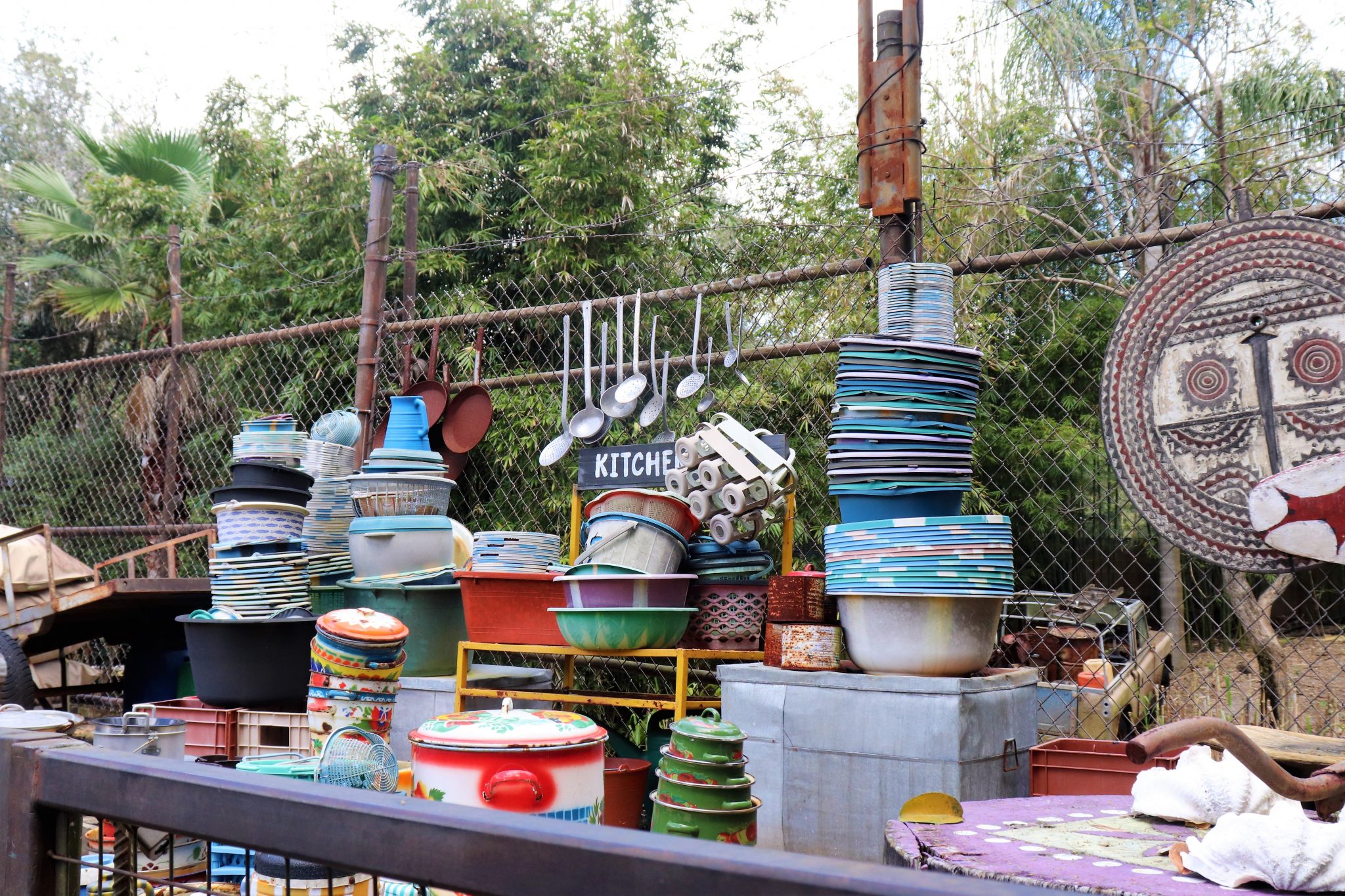 It’s not a large area (seating might be hard to find during busier times) but I really like the vibe there and the African decor. It’s outdoor seating but they have big fans running when it’s hot so I felt very comfortable.

For my meal I went with the Chicken Gyro (Grilled, Chopped Chicken served open-faced on Naan topped with Cucumber and Tomato Salad and Tzatziki Sauce and served with African Coleslaw): 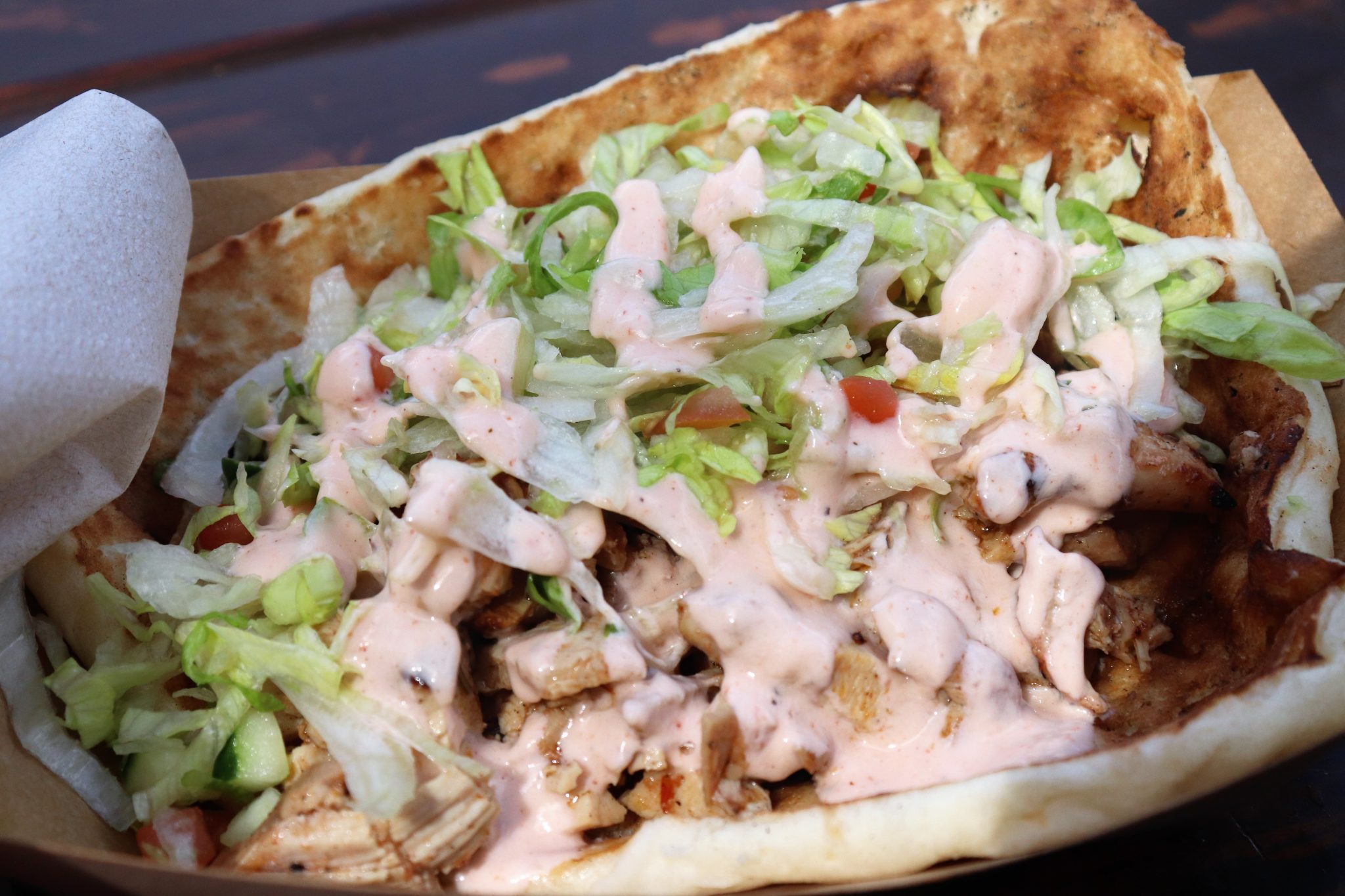 This was quite tasty. I liked that it was served on naan bread. It was a little tricky to eat – there was so much packed into it that you couldn’t really pick it up and eat it, everything fell out. So I had to kind of pick at the chicken with a fork and then eat the naan bread after. Still good though. And the Tzatziki sauce was pretty spicy!

Here is the African slaw that came with it: 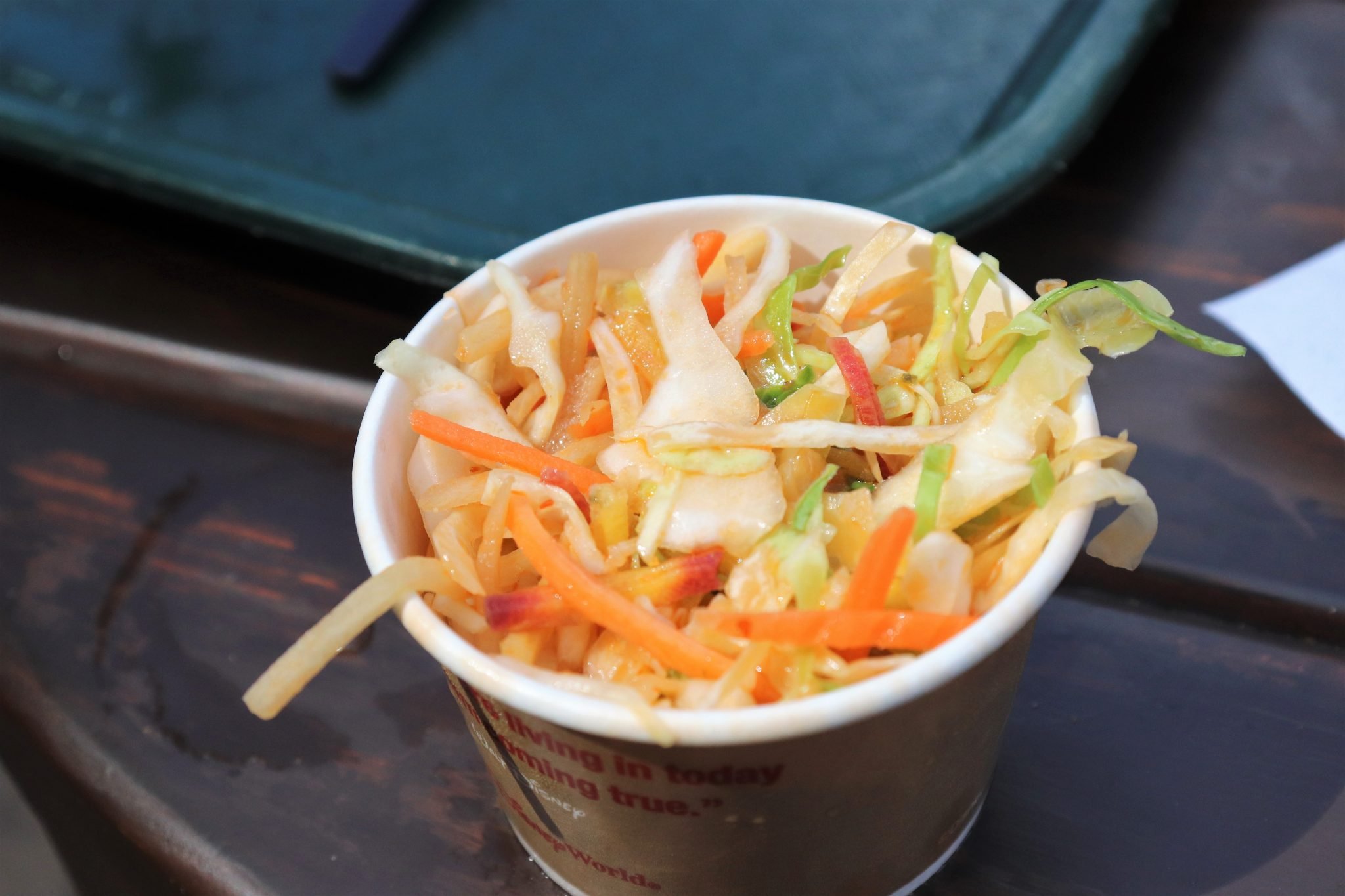 It wasn’t bad – it had some more unusual items like papaya in it. It didn’t stand out to me too much though, and I was pretty full from the gyro so I didn’t eat most of it.

My friend went with the Chicken Bowl (Grilled Chicken on Cilantro Rice and Salad Greens Bowl finished with Salsa): 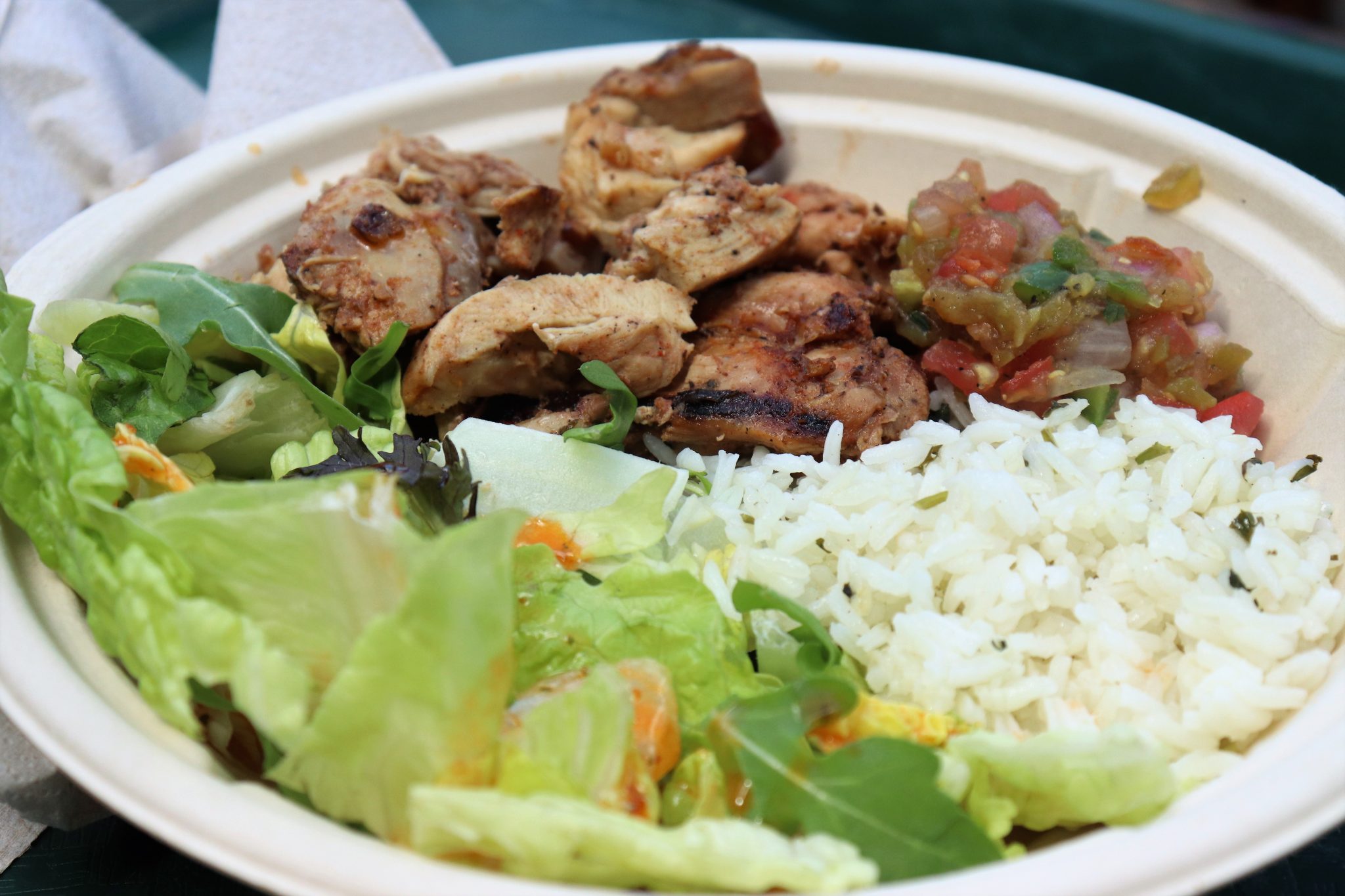 This was tasty and the chicken had a bit of a kick to it as well, if you like spicy. It’s also a great healthier option and is a really well balanced meal. You’ve got chicken for protein, rice for carbs, and lettuce/salsa for some veggies.

Since I had just run the 10k that morning, I felt like I needed to celebrate with a beer! I went with the Safari Amber Lager (Malty, slightly sweet taste balanced with European grown Noble Aroma Hops): 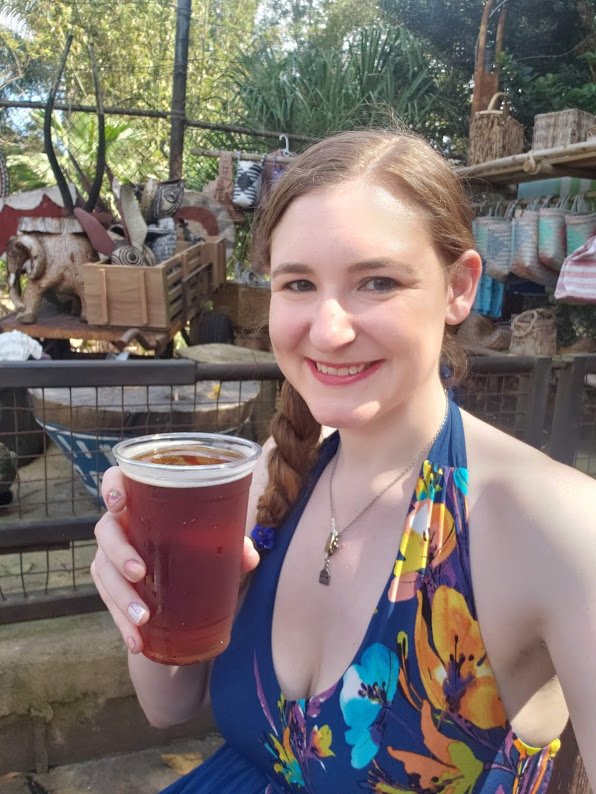 I enjoyed this one. It was nice and refreshing and had some good flavor to it.

My friend went with the Reef Donkey APA Draft (secret selection of Hops gives this Dry Beer a Lemon-Lime Aroma with a Citrus and slight Tropical Fruit flavor).  It was definitely hoppy but it was good.

Overall I think Harambe Market is a nice place to grab lunch. They don’t have a wide food selection but the items that they do have are rather unique and very good. The only other issue is that it’s not the biggest seating area, so finding a table might be a little tricky. We got lucky – someone saw us looking and waved us over as they were about to leave.  It’s outdoor seating but I really like the vibe of it too.

Have you eaten at Harambe Market? Do you like the food there?