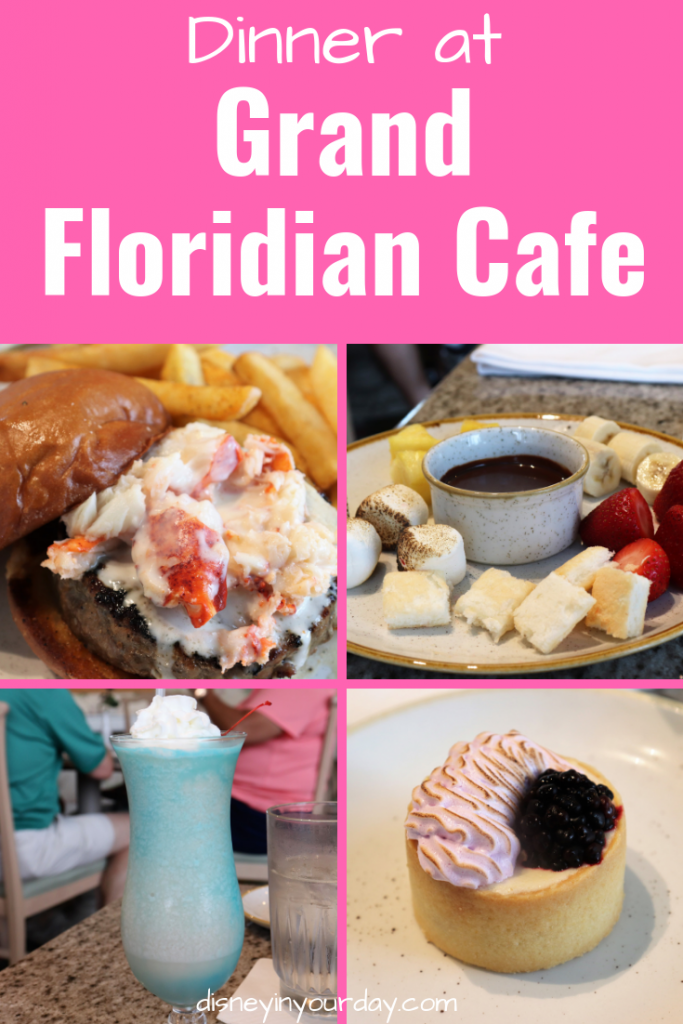 On my last trip to Disney I was a bit tired of the dinner options in Magic Kingdom, so we opted to head out of the park and try one of the resorts nearby. I had been to Grand Floridian Cafe once before and really enjoyed the pasta dish I had there. They have another entree on their menu that I was really interested in trying, so on our first day of our August trip we hopped on the boat from Magic Kingdom and went over to the Grand Floridian for dinner.

It’s a cute restaurant on the inside. One of the touches that I really like is that each table has a fresh pink rose to decorate. Having fresh flowers is something that’s a little bit different but really nice and makes it feel just a little more special. And fancy – you’re in the Grand Floridian, after all! 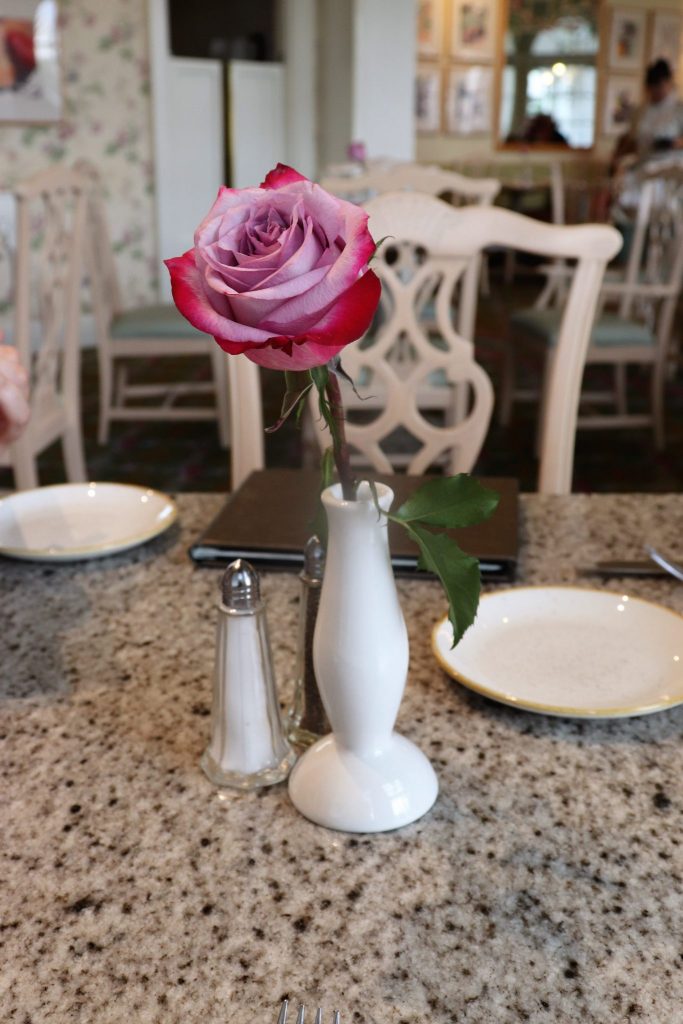 Since it was our first day in Disney we had to start vacation off right with some drinks!  For my beverage I went with the Florida Sunshine (peach schnapps, chambord, vodka, and a splash of orange and cranberry juices):

The name of it sounded very appropriate for our first day in Florida and it was indeed quite refreshing.  Not overly strong and one of those drinks that definitely could get sucked down really easily in a few minutes if you’re not careful!

My friend went with the Grand Colada (a tropical blend of Myer’s Original Dark Rum, Coconut, and Pineapple topped with blue curacao): 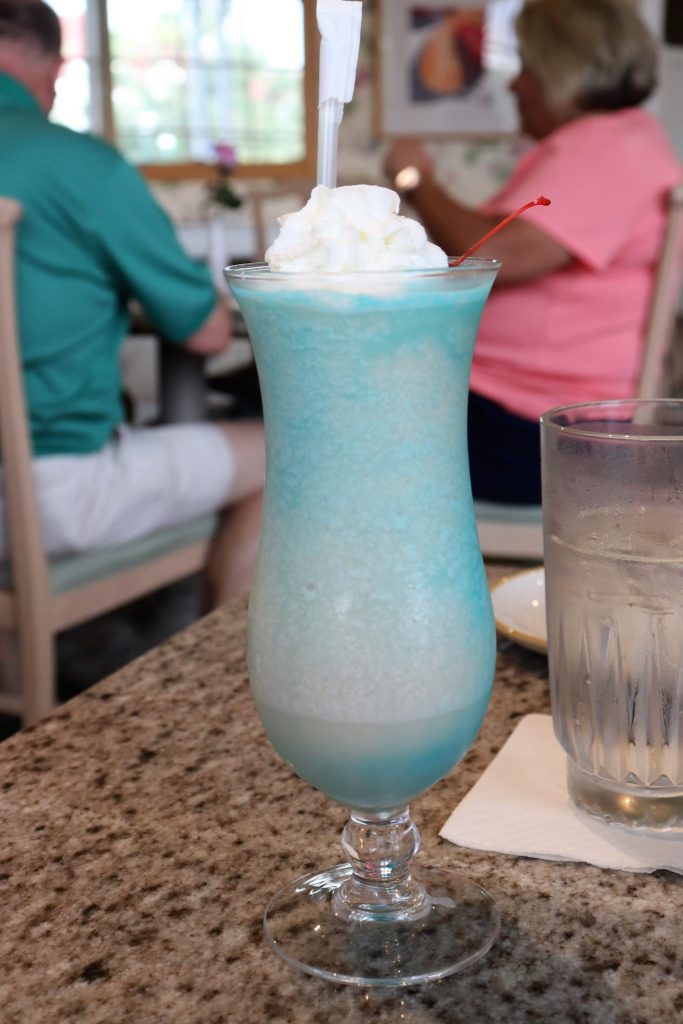 This was a frozen beverage and very good, though definitely on the sweet side.

We didn’t order any appetizers but we did enjoy the free bread. They were soft dinner rolls that came with butter topped with sea salt, which is my favorite way to eat butter. 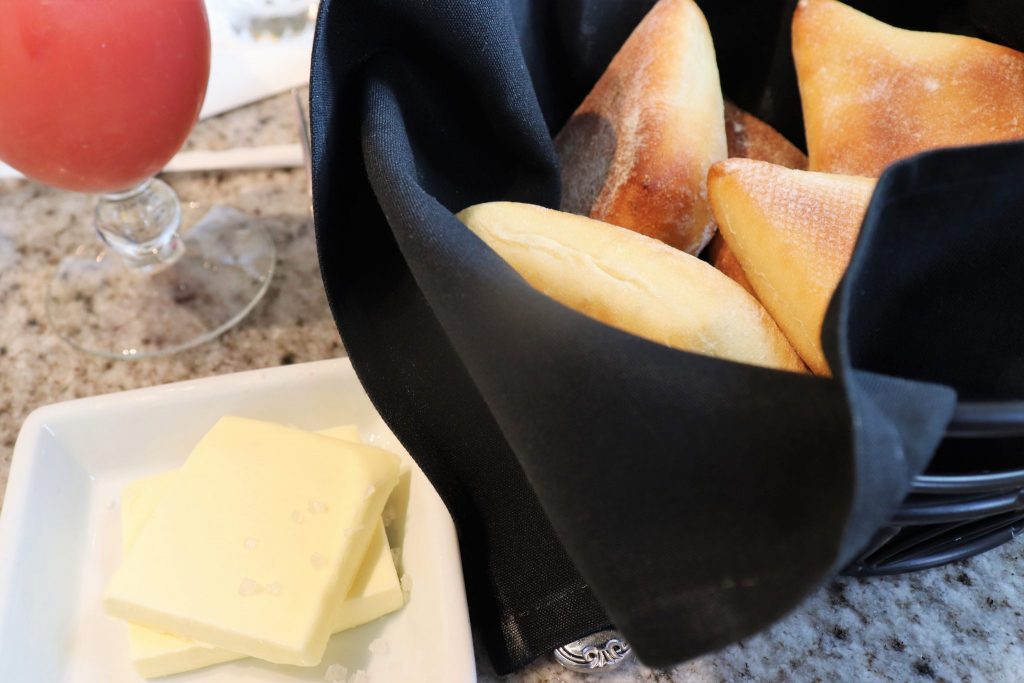 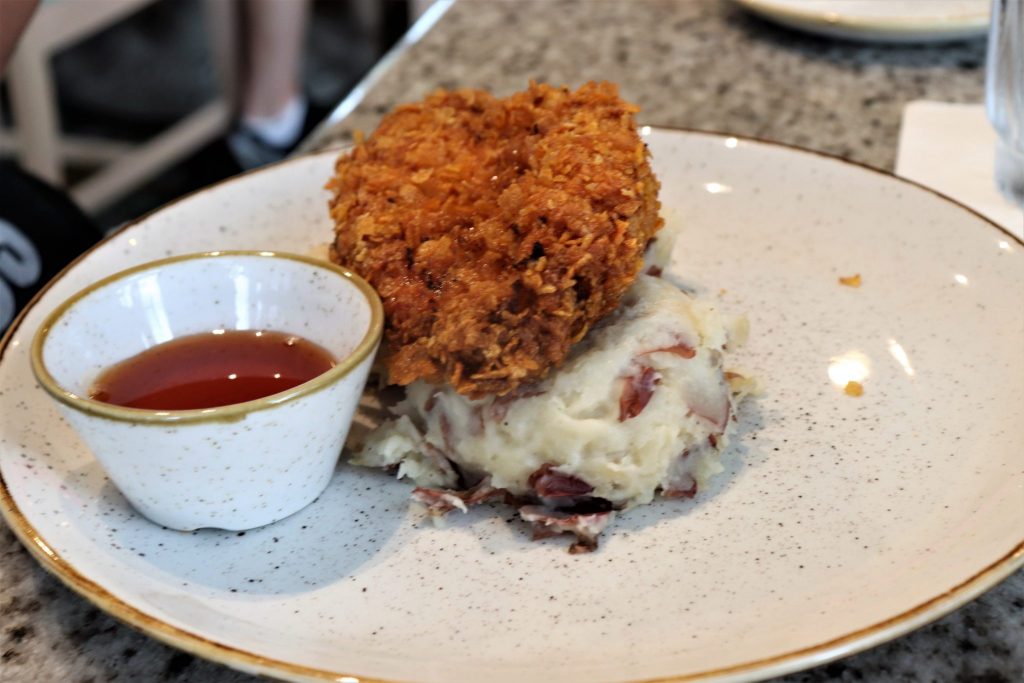 As you may be able to tell from the photo, she opted to have the mashed potatoes instead of the kale/bacon/crispy potatoes. She also had the sriracha-honey drizzle on the side because she’s not a huge fan of spicy. The chicken breading itself did have some spiciness in it already, and that was plenty for her. I had a bite and while I’m not normally a huge fried chicken fan, this was really tasty and something different if you use the drizzle. 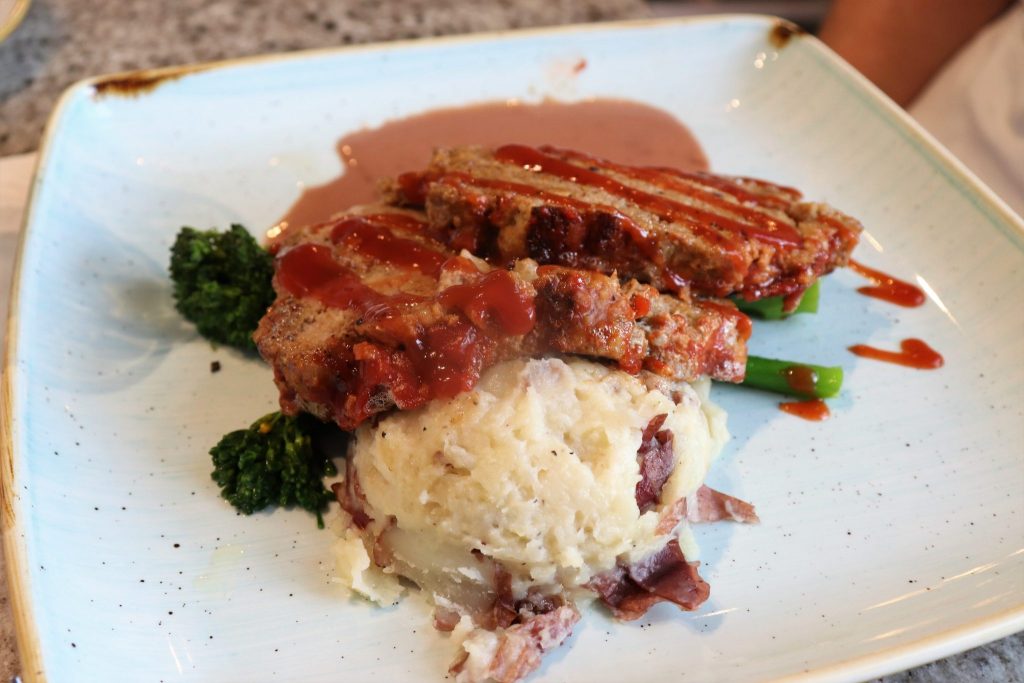 She kept remarking about how good it was, especially for turkey meatloaf (and not typical meatloaf). It looked tasty. 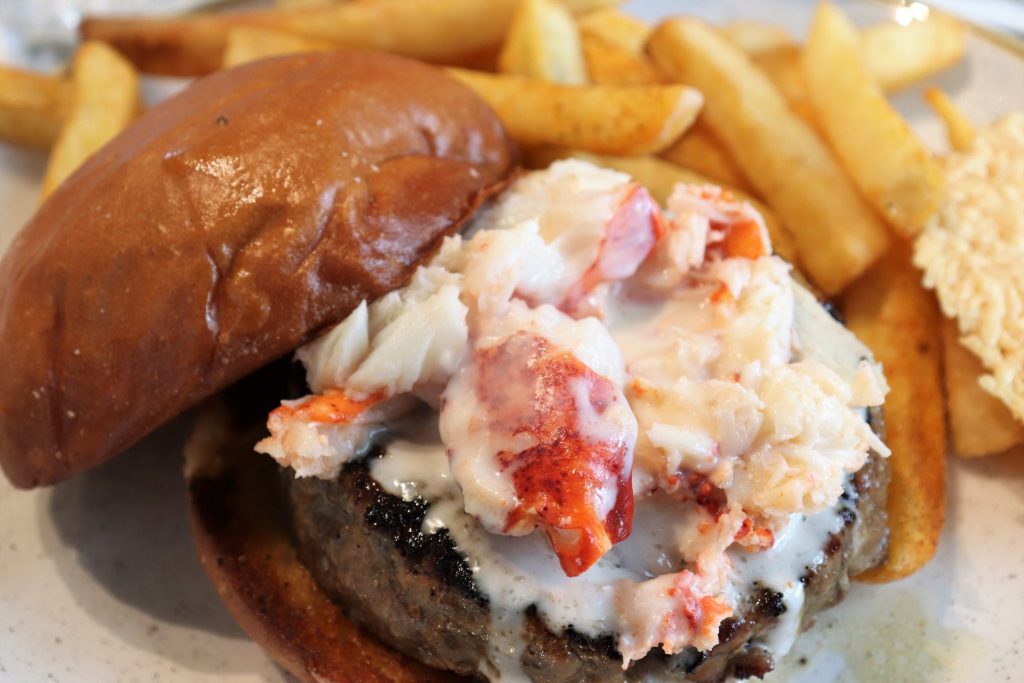 This was basically what I came here for and it didn’t disappoint.  It’s what it sounds like – a burger topped with lobster. All of the flavors worked really well together. The delicate flavor of the lobster is a little bit overpowered by the burger, but I still wouldn’t hesitate to order this again. I was hoping the french fries would have some really interesting seasoning but I didn’t taste much. I ended up dipping them in some of the sriracha honey sauce that came with the fried chicken.

And then it was time to end with something sweet! Two of us ordered the Lemon Blackberry Tart (lemon-blackberry tart with lavender meringue): 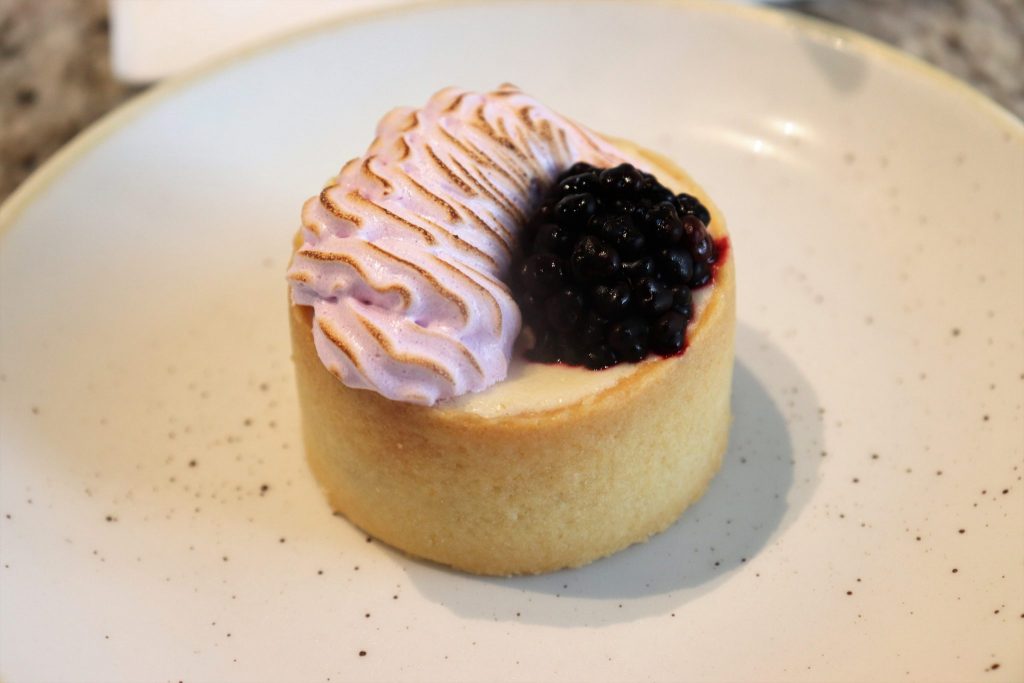 I like the fact that most of the desserts at Grand Floridian Cafe are small – this was $4 and a perfect little after dinner bite without stuffing you. It was delicious and a great way to end the meal.

The other dessert on the table was the Chocolate Fondue (with fresh fruit, angel food cake, and campfire marshmallows): 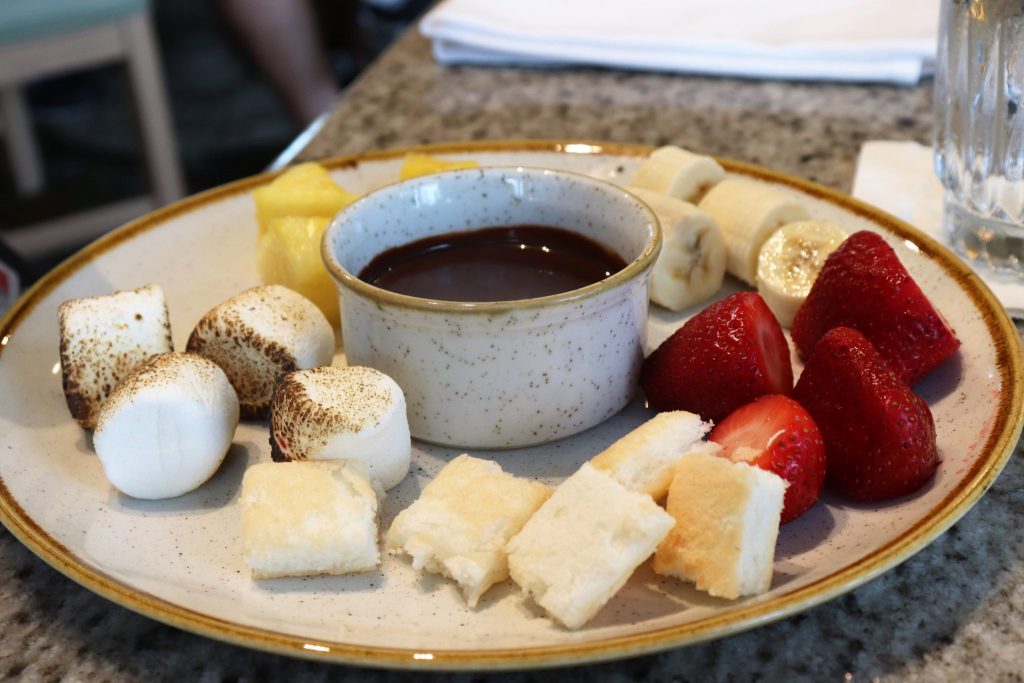 My friend was very excited about this dessert and ate almost all of it. I think she enjoyed it more than her dinner. It would be a good choice to share for a dessert too.

Overall I would not make a big point to go out of my way for the Grand Floridian Cafe, but I would stop there again if it was convenient. If I was staying at the Grand Floridian or headed to that area for another reason, or wanted dinner from Magic Kingdom and wanted to do something a little different it made for a good meal. Our service was very good as well.

Have you been to the Grand Floridian Cafe? What would you order here?