You are here: Home / Disney World / Glossary of Disney terms and lingo 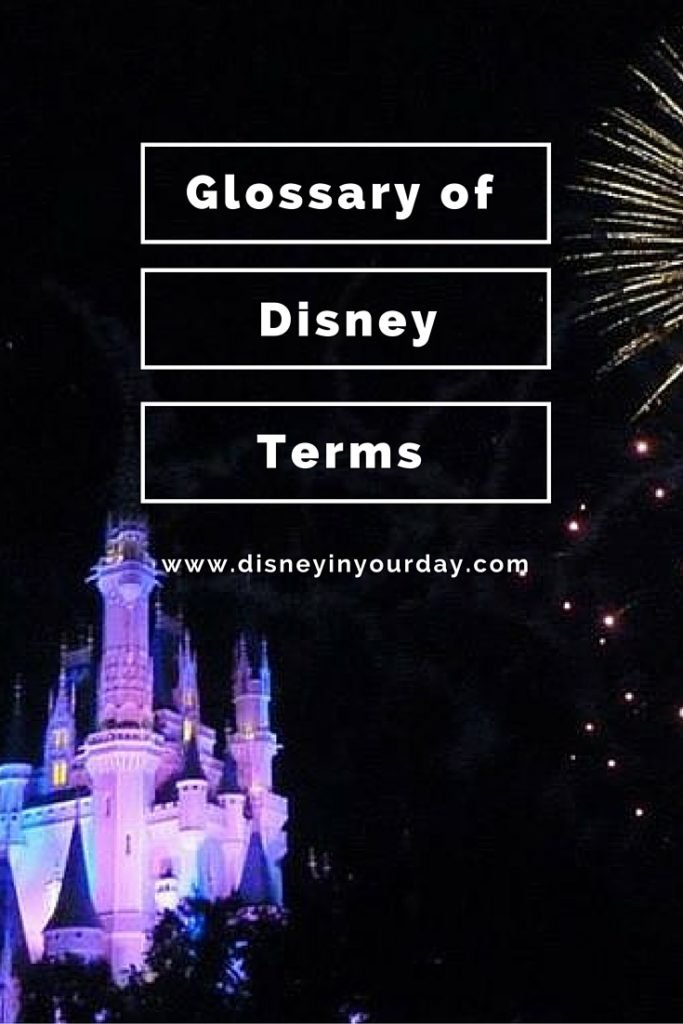 You might not have realized it, but the world of Disney theme parks practically needs its own dictionary.  Talk to a Disney person and it’s almost like you’ve started talking another language.  I always try to be careful here on the blog not to use abbreviations too often, but I assume people know at least some of the basics.  When I work as a travel agent I also try to be mindful that people may not know what it all means so I try my best to explain everything.

However, a friend of mine recently came up with a “glossary” of Disney terms for another friend of ours who wasn’t as familiar with all of our lingo.  I thought it could be useful here for those just diving into the world of Disney theme parks!  If you’re in the beginning stages of planning a trip hopefully this will help you sort it all out. 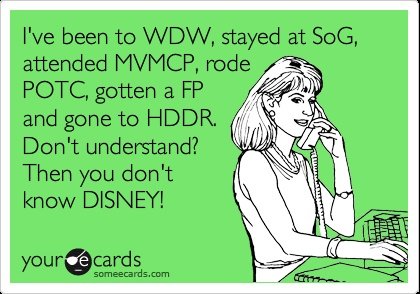 Advanced Dining Reservation (ADR) = When you book a table service meal ahead of time.  ADRs can be made 180 days before you travel and are recommended for many of the popular restaurants.

Counter Service (CS) =  Meals that you order at a counter, have handed to you, and then you find your own place to sit.

Dark ride = a usually slow moving attraction where you ride in a car and follow a track.  Most of the rooms are in the dark with various scenes lit up as you go along.

Disney Dining Plan (DDP) = a way to prepay for all meals at Disney.  Includes 1 counter service meal, 1 table service meal, and 1 snack per person per night.

Extra Magic Hours (EMH) = extended hours when the parks are open beyond the “official” operating hours – can be in the morning or in the evening.  Only available to guests staying at an official Disney resort hotel.

MagicBand = the wristband that serves as your park ticket, hotel key, and credit card anywhere on property
Memory Maker =  Purchasing memory maker gives you access to all of your photos taken by photopass photographers and on rides
Magic Shot =  When a photopass photographer has you pose a certain way and then later a Disney character or something fun is edited into your photo with you.
My Disney Experience (MDE) = a website and app where you can plan the vacation, make fp’s and adr’s The app also has realtime updates on wait times for each ride

On Property = anywhere in Disney World, including the hotels

Photopass = Locations where Disney photographers will take your picture, usually outside of major “landmarks” or with characters.

Rope Drop = park opening. They used to have a physical rope across the path and at opening the cast members would drop it at the official time.

Single Rider Line =for rides that have people riding in pairs, they have a separate line for single riders who fill the “holes” when an odd-numbered party comes through.  Your party can all stand in the single rider line together, but you’ll be separated during the ride.  Usually (but not always) this is a MUCH quicker wait than standby.

Table service (TS) =  Like a regular restaurant where you’re seated and have a server.  Often requires an ADR.
Was this list helpful to you?  Can you think of anything I forgot from my glossary of Disney terms?