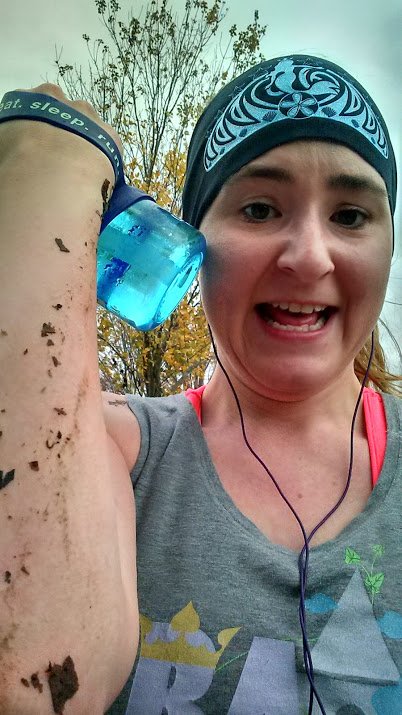 Not my best look.

Some weeks are up, some weeks are down.  This was one of the down weeks, unfortunately.  In both the figurative sense and the literal sense!  I had mentioned that my foot was hurting during last week’s run, so I took a couple of days off and didn’t run until Wednesday.  Then on my Wednesday run I slipped and fell.  While I didn’t think I was hurt, I woke up super sore the next morning which then hindered my ability to run once again.

Luckily it was a fairly light week on the training plan.  The “long” run was around the same that I’d been doing on my short run, about three miles.

I headed out on my short run on Wednesday feeling pretty good.  The weather was nice and I had the day off from work.  I was doing well and then about halfway through my run, I slipped and fell.  The ground was wet from rain the night before and leaves were everywhere, and I slipped on a small bridge going across a creek in our condo complex.  And as I was falling the one thing I was thinking was, “my phone!”  I was scared it would go flying off the bridge and into the water.  So I was quite relieved to see it on the ground in front of me – priorities, people!  Aside from being a bit muddy I was fine.  I finished the run but at a slower pace since I was a little more cautious about where I was running on the ground in front of me.  Gotta avoid those leaves!

So Thursday morning I woke up feeling sore and had no idea why!  Friday morning the same thing.  I had been hoping to run on Friday but was feeling sore… and then I remembered my fall.  Even though it didn’t hurt at the time, it obviously showed up a little bit later.  I felt like it would probably be best not to run, but I still decided to go for a walk today so I could at least get some activity in.  I tried to keep a pretty brisk walking pace, but no running was involved.

Today I finally felt recovered enough to run again.  It was an okay run, not a good one but not a terrible run.  No real reason, just that some days you don’t “feel it” the way that you do other days.  But I got it done!