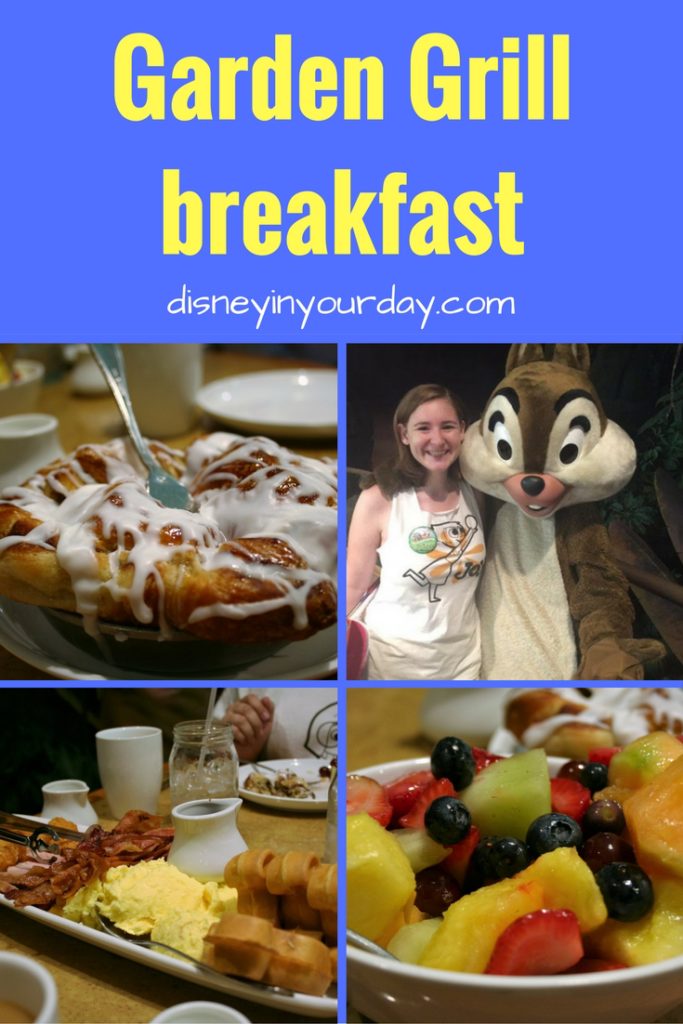 Garden Grill is a restaurant that I’ve always had my eye on, but never got around to visiting.  It’s hard in Epcot, where you have so many amazing restaurant choices.  But when I heard they were serving breakfast again it sounded like a great time to visit!  And the Garden Grill breakfast did not disappoint.  We went there on our girls trip on our first full day there and it was a great way to start the trip!

Garden Grill has a couple of cool things going for it.  The first is that it is a rotating restaurant.  It spins slowly and you can see scenes from the Living with the Land boat ride.  It’s timed so that you do about a full rotation during your meal.  And it’s a character meal!  So you get to meet Chip and Dale, Pluto, and Farmer Mickey. 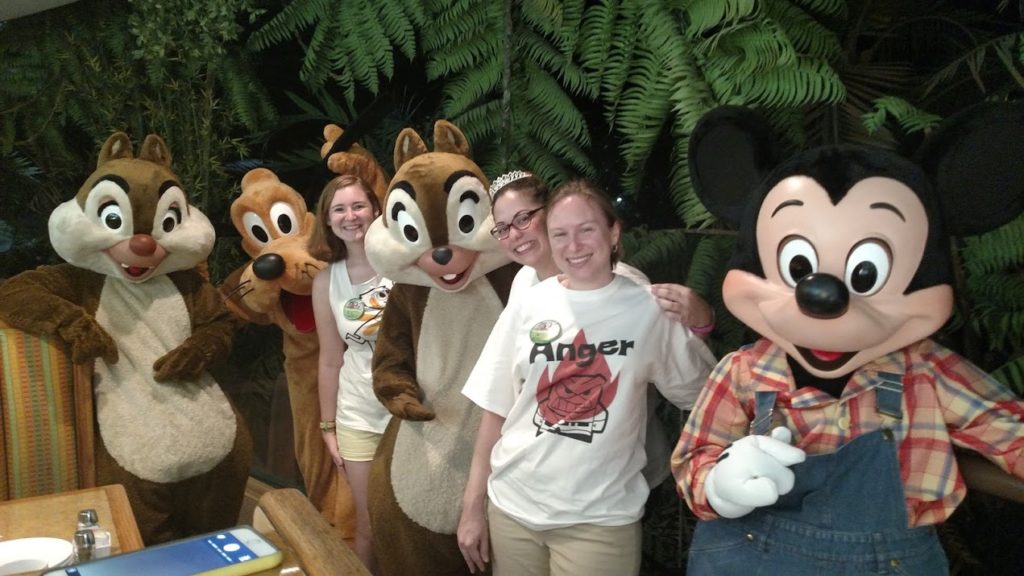 We had a reservation right around opening time.  One cool thing was that they brought all the characters out at once so we got a photo with all 4 of them!  That was pretty cool.  And then they came around individually for photos and autographs.  The restaurant wasn’t too busy and most of them were actually able to come by twice in the 50 or so minutes that we were there.

The meal is a set price and all of the food is served family style, so they bring you out a large plate of each dish to share.  You can always request more too!  Beverages are included so we all started our early morning with water and coffee.  Our server was great – I wish I remembered her name, but she was friendly, checked in often, and always kept our coffee cups full! 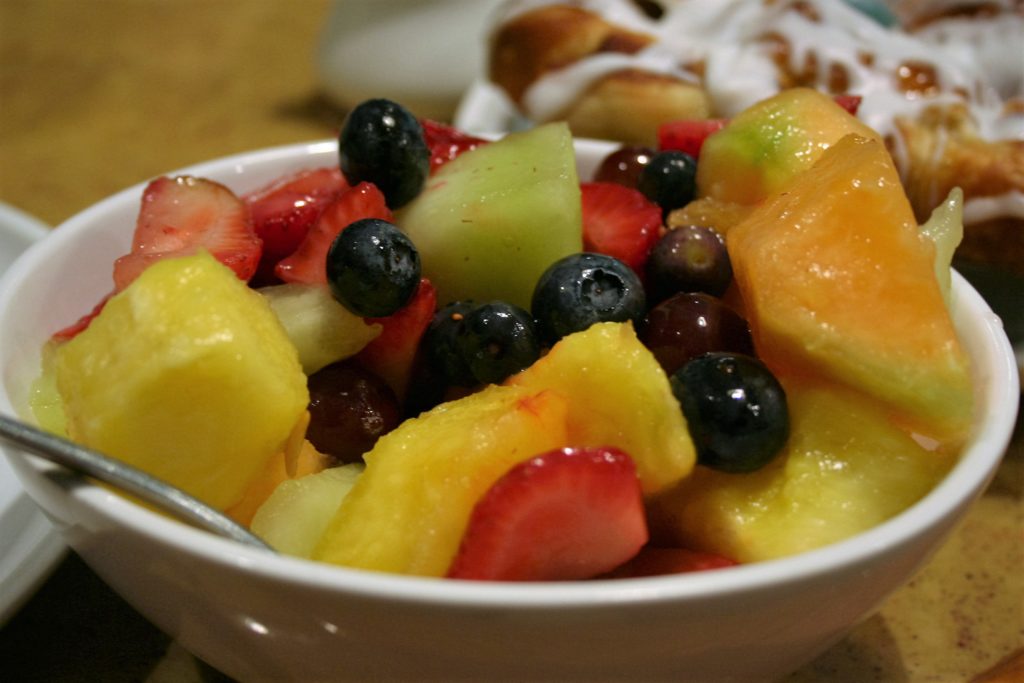 The first course they brought out after our coffee was some fresh fruit and a sticky bun.  I love fruit and even in Disney I like it when I can at least pretend to be healthy.  There was a nice variety of fruit, but the real highlight was that cinnamon bun.  It was amazing.  I could have just eaten this and the fruit for breakfast and been a happy camper!

But there was more to come.  A large plate with Mickey waffles, scrambled eggs, bacon, ham, and tater tots came out.  The waffles had both traditional maple syrup and a nutella syrup with them.  There was also a variety of 3 salsas served that you could enjoy with the eggs and ham (or whatever you wanted, really).  I liked the additional sauces and it was a nice way to make the meal a little more interesting. 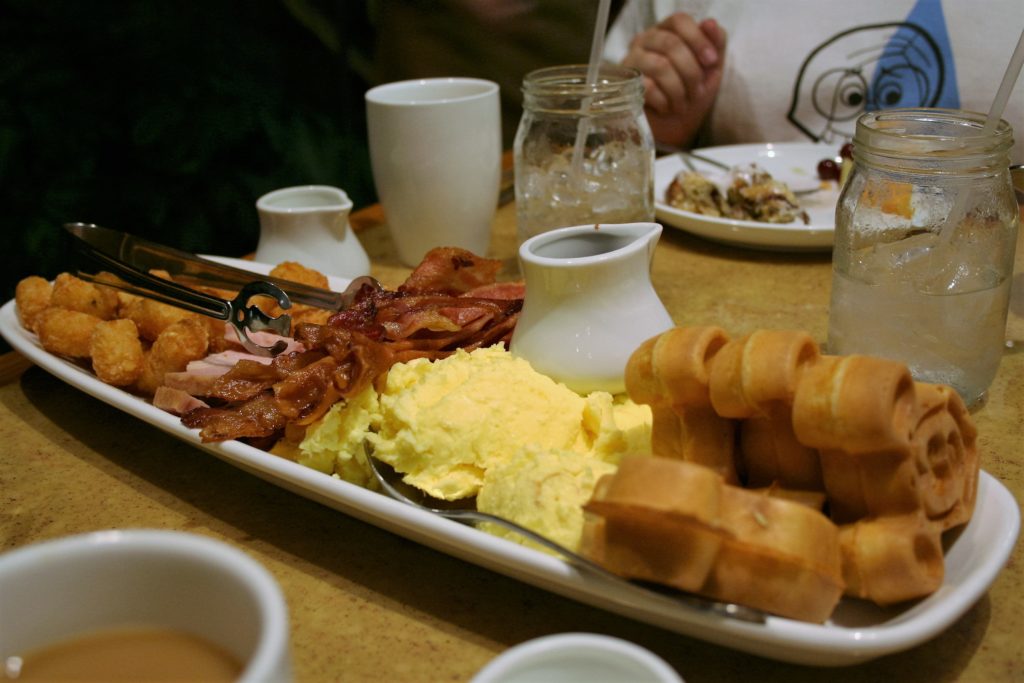 The character interactions were all so much fun.  Chip and Dale are always the highlight when you get to see them.  They are so silly!  Dale pretended to pick his nose and then wipe it on Chip – lots of crazy antics that they get up to.  The first time Mickey came by he seemed a little subdued, but the second time he made his round he was much more energetic and interactive.  We’re just going to assume that he also finally had his morning coffee 😉  All of the characters were able to sign my book as well!

Breakfast was $30 per person and while it sounds a little steep for breakfast, given how good the food was and the amount of it, plus the character, I think it was actually a great deal.  I wouldn’t hesitate to do it again.  Plus we were done right around 8:55 so we went right down to Soarin’ and got on it with almost no wait!

Have you ever been to the Garden Grill?  What’s your favorite character meal?