You are here: Home / Uncategorized / Frozen Ever After Sparkling Dessert Party 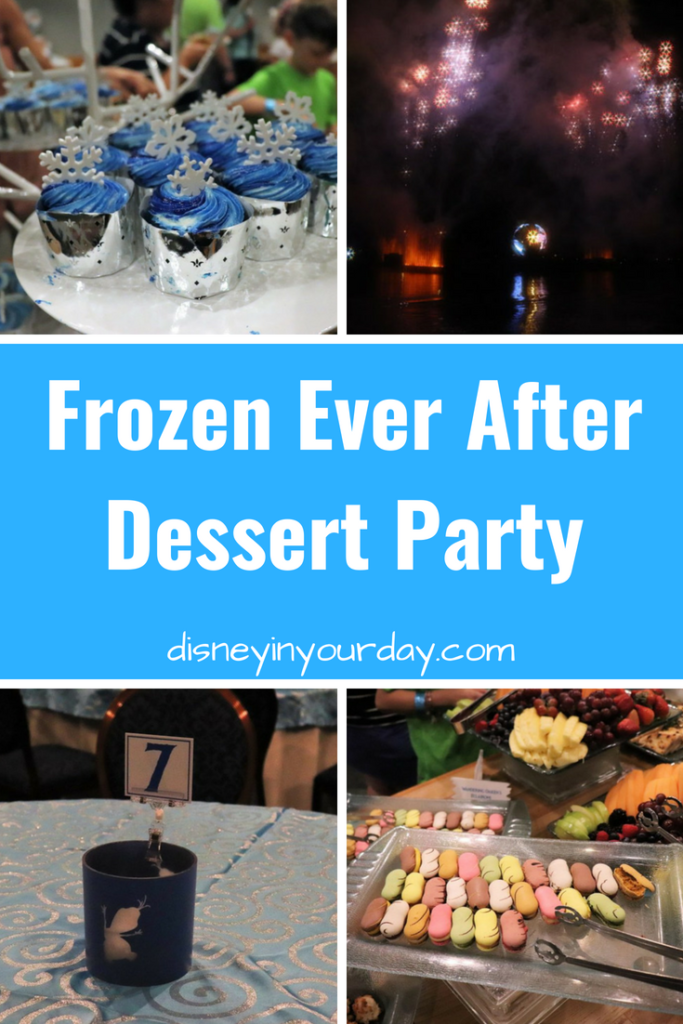 Dessert parties. They’re a big thing at Disney now! It started with the Wishes dessert party, which Jason and I did on our honeymoon – back in the day (7 years ago as of this coming Monday!) we only paid $25 per person for a buffet of desserts and a great view of the fireworks. Well, prices have gone up, but options have also increase, and in many cases I still think it’s worth it. As a sucker for dessert and fireworks, I found myself trying the Frozen Ever After Sparkling Dessert Party on this past August trip. 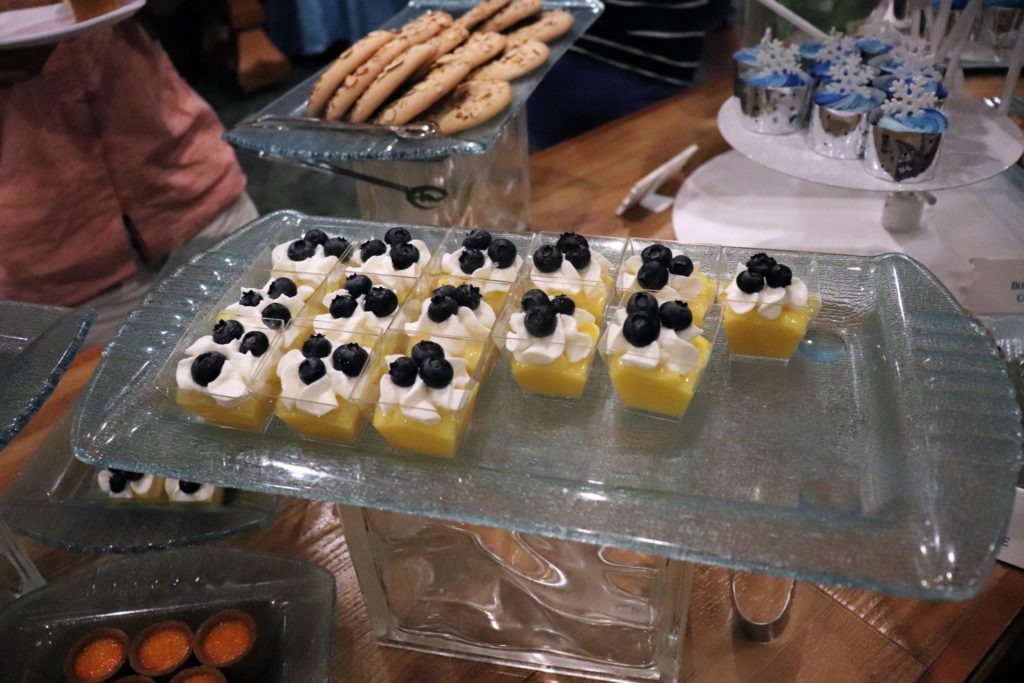 I was debating between the Frozen Ever After Sparkling Dessert Party and the Star Wars dessert party in Hollywood Studios, but I ultimately went with Frozen for a couple of reasons. I haven’t done this one yet (I did Star Wars a couple of years ago) and I’m going with some friends in a future trip who I think might be more interested in doing Star Wars with me. So Frozen it was!

In many ways you get the “most” for your money with this dessert party.  (There’s now one dessert party in each park, and comparing them could be a whole separate blog post!).  All of them include dessert and fireworks viewing (or Rivers of Light, in the case of Animal Kingdom), and all except for the Magic Kingdom include an open bar. But Frozen Ever After is the only one that includes a ride on an attraction after the park closes. 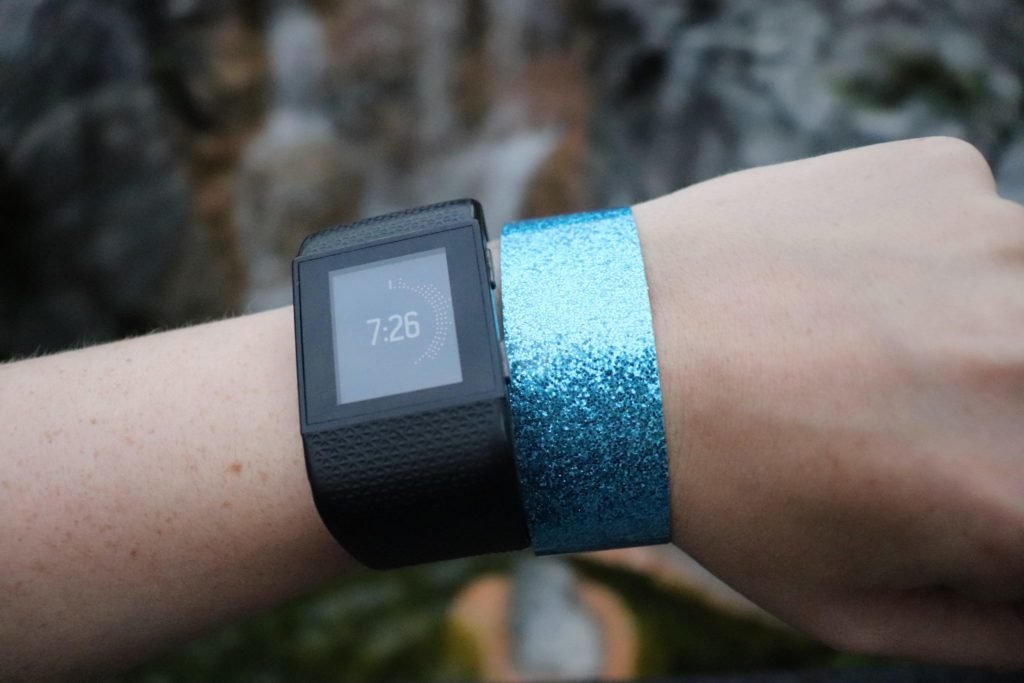 Officially check-in time is about an hour before the fireworks start, so 8pm.  However, they will almost always let you in early so I recommend you do that to get the most bang for your buck! We were allowed in at around 7:40pm.  I believe they try to do this outside, but it was raining lightly the day I was scheduled for it so they moved us inside. They give you a wristband when you check in to make sure that only people signed up are heading to the desserts, the fireworks, and the ride. We had to show the wristband several times throughout the night. 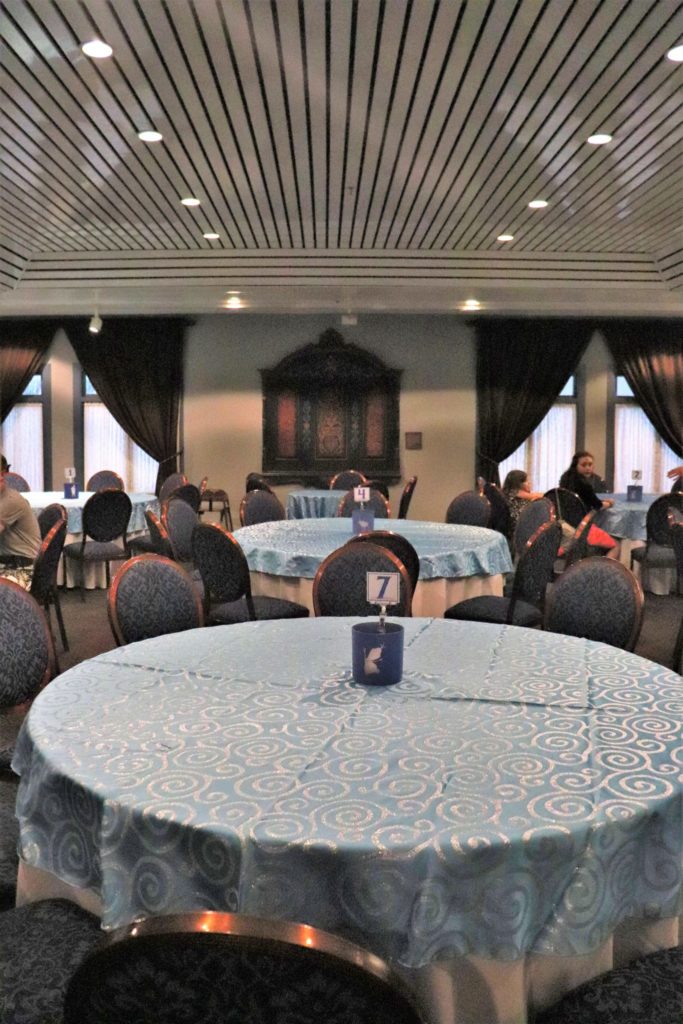 We were actually inside a private lounge above the Frozen Ever After attraction.  It was kind of a neat space, with different viking artifacts decorating the walls. I’m kind of glad that we were inside because it was a cool experience to see a space we might not normally see! There were large tables that held about 8-10 people, and they were decorated with blue tablecloths and Frozen centerpieces. For me, the only real downside of this arrangement was being assigned to a table with 8 other people.  I don’t necessarily mind sharing a table, but I didn’t have the best companions.  In fact, I was amazed at how much some of them had to complain about the dessert party and Disney in general!  And when your biggest complaint is “I don’t really like dessert,” well… why did you come to a dessert party? 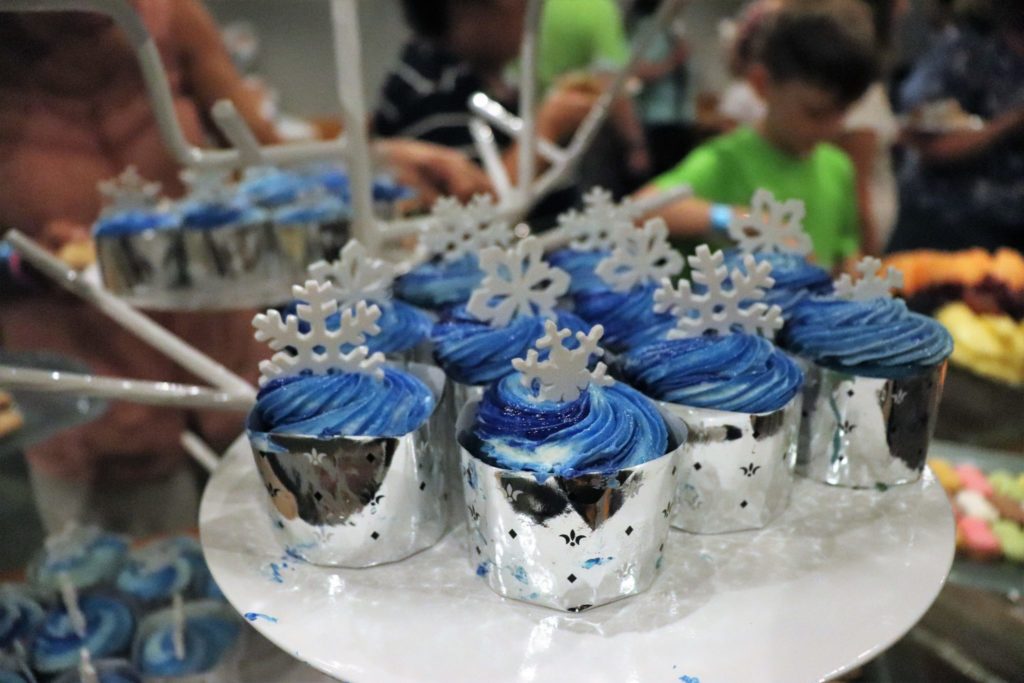 But on to those desserts! They had both cold and hot dessert buffets.  The hot and cold desserts included: 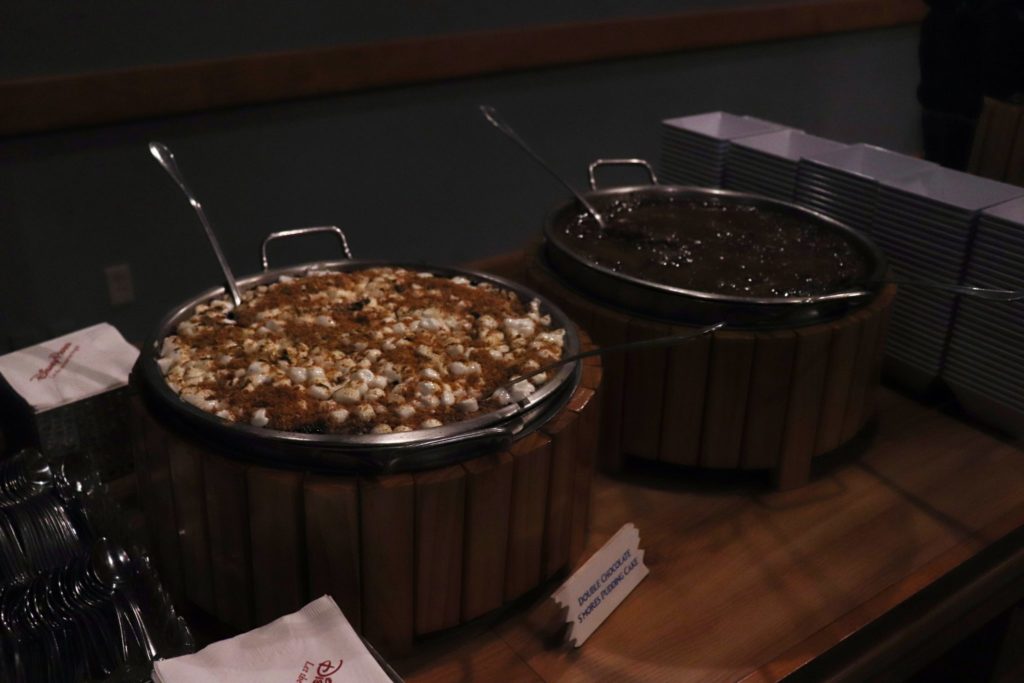 For me, the best dessert was definitely the warm s’mores pudding cake. It was rich and delicious and paired perfectly with the ice cream.  I also really enjoyed the Key Lime Tarts with orange glaze and the “Eclairons.” I think they are supposed to be a twist between an eclair and a maracon, but really they were just maracons that were shaped like eclairs, as far as I could tell. 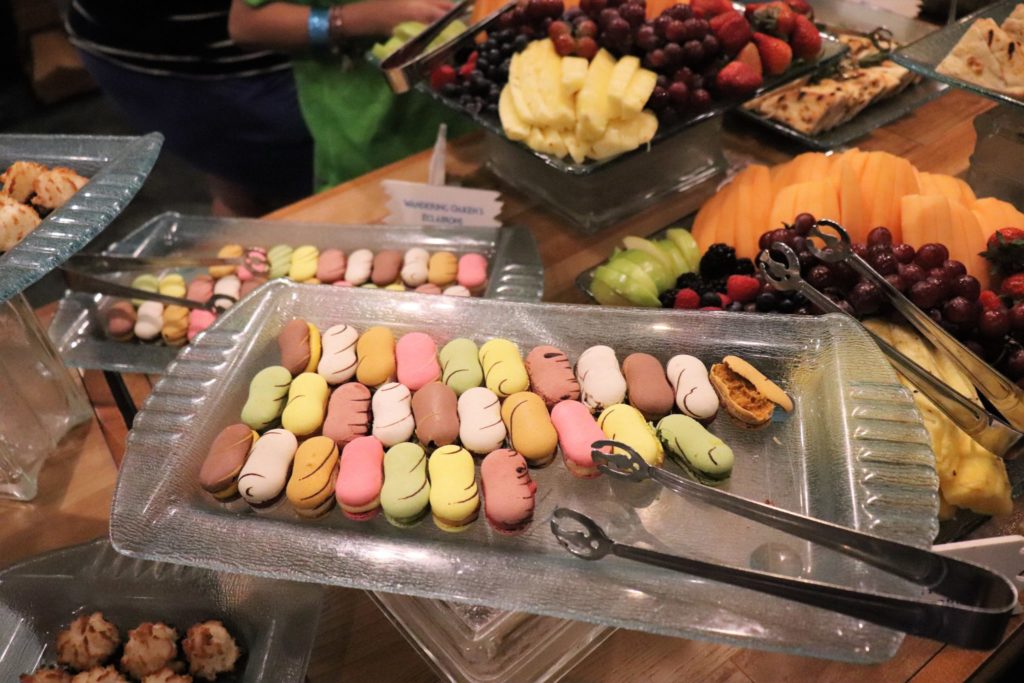 The nitro popcorn was also really cool.  It was caramel corn, and they freeze it in nitrogen so it literally has cold steam coming off of it when they hand it to you. Perfect for a Frozen party!  The popcorn ends up being chilly and harder than usual (but not in a bad way) when you bite it, and it’s a pretty fun snack. 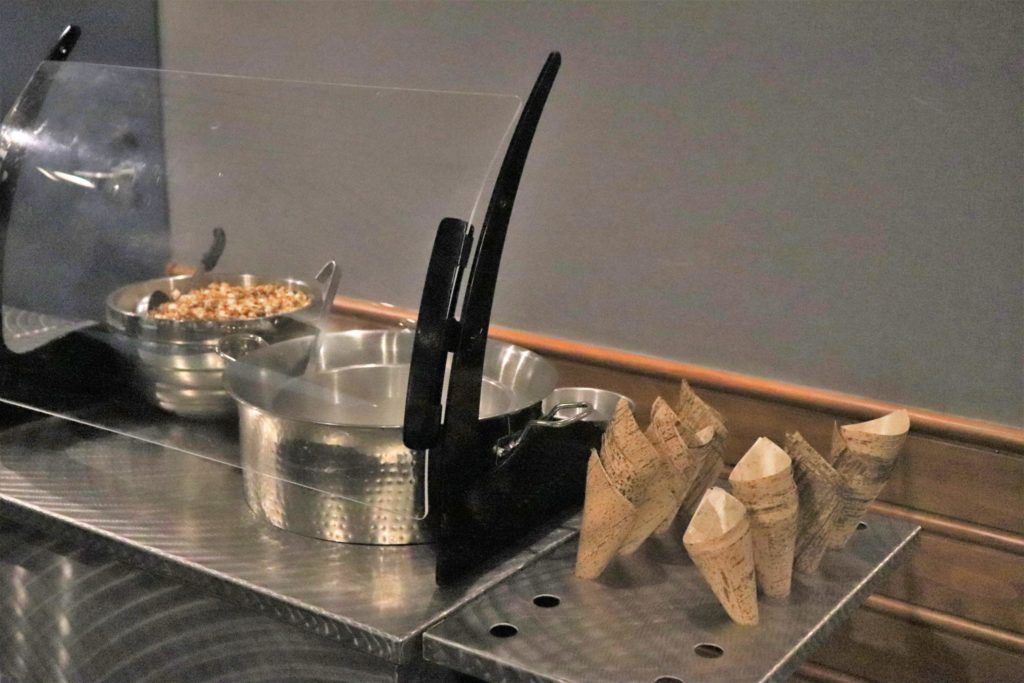 There was also a section of “not so sweet” items, for those people (like above) who don’t want to stuff themselves with sugar. The savory options included:

I think it’s nice that they have these options for people who don’t want just desserts.  I didn’t really partake in the fruit or the snack mix, but I did have some of the cheese fondue. And honestly, it was really good and one of the food highlights for me! They had broccoli, flatbread, and bread cubes to go with it. Since the dessert party was my dinner I ended up having two small plates of cheese fondue with my desserts! It was warm and delicious. 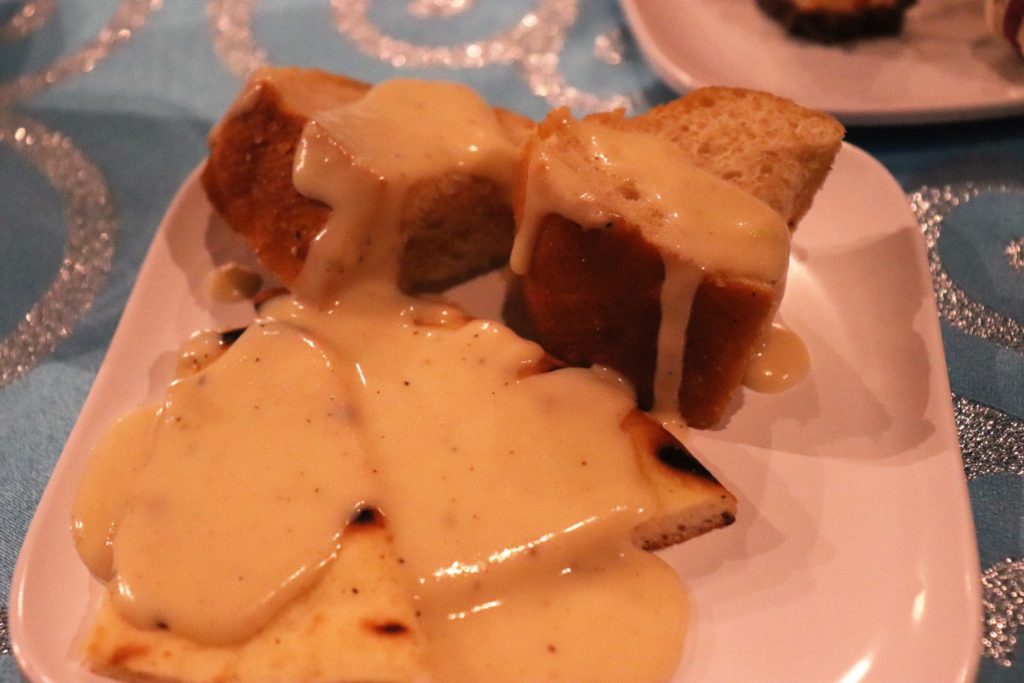 I’m going to be honest, I think the open bar is what makes the high price of the dessert parties worth it. They had a selection of beer and wine as well as 3 specialty drinks. The three cocktails available were: 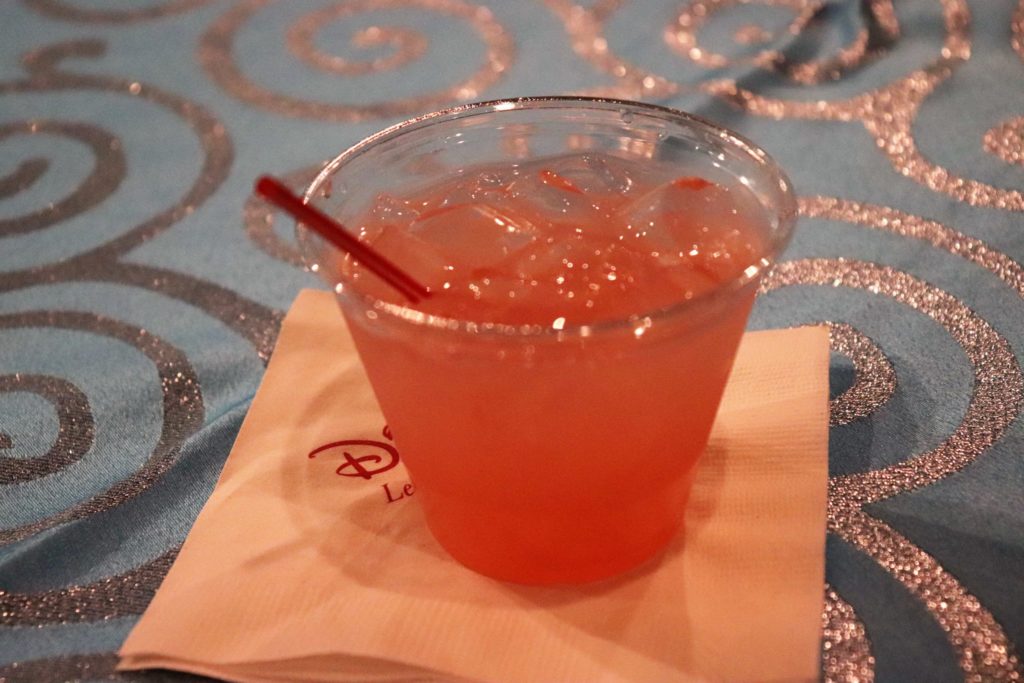 Of course I tried all three. Some more than once.  #fortheblog.  Anyway, when you’re by yourself at a Disney dessert party you get friendly with the bartender. When I came back for the third one he said he wanted to know which one I liked best, but he would guess first. He said, “It’s the pink one, isn’t it?” And he was right! The Summertime Celebration Margarita was definitely my favorite. The other two were very sweet, but this one had a better balance.  In fact, after 4 cocktails it was about time to head down to fireworks, so I brought over a to-go cup from the coffee station and asked my new best friend bartender if he could make me a margarita in a to-go cup so I could take it with me. He not only obliged, I think he was pretty heavy handed with the tequila!

And they also have non-alcoholic beverages as well. There’s your typical soda, water, coffee, and tea. And then they have some fun specialty drinks. 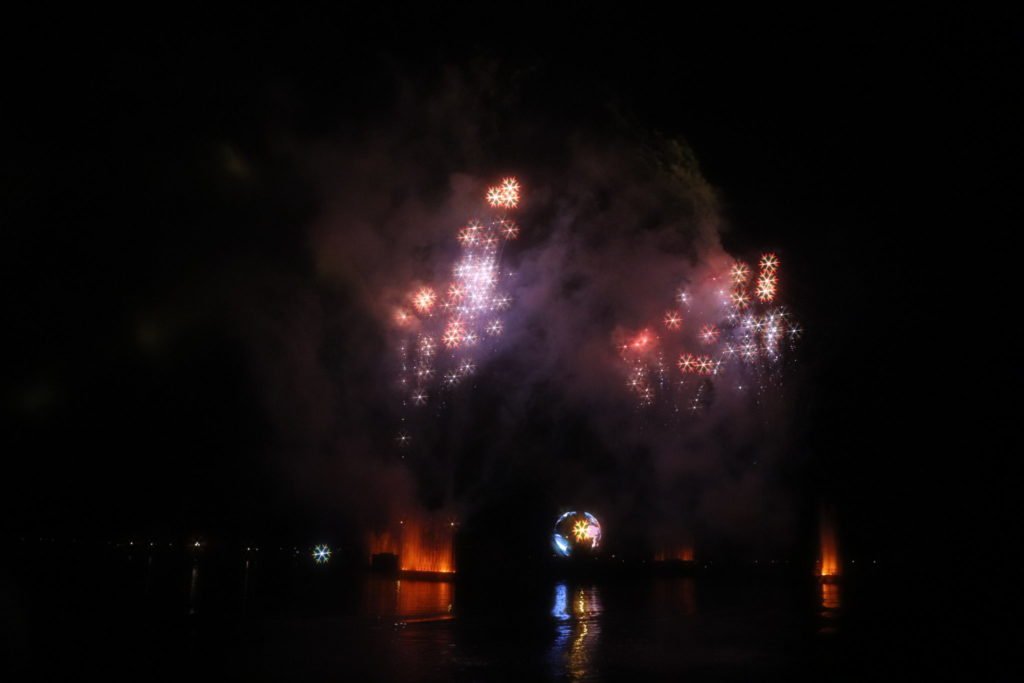 At around 8:45 they led us to our designated viewing area for Illuminations.  This was at the entrance of World Showcase, right across from the American Adventure pavilion (if you’re familiar with the FP+ viewing location, it’s to the left of that). So it’s a pretty nice spot to watch the fireworks from. They also gave us special glasses to put on that made lights and fireworks look like snowflakes. This was a really neat effect! I managed to put the glasses on my camera lens to get a picture or two to show you. 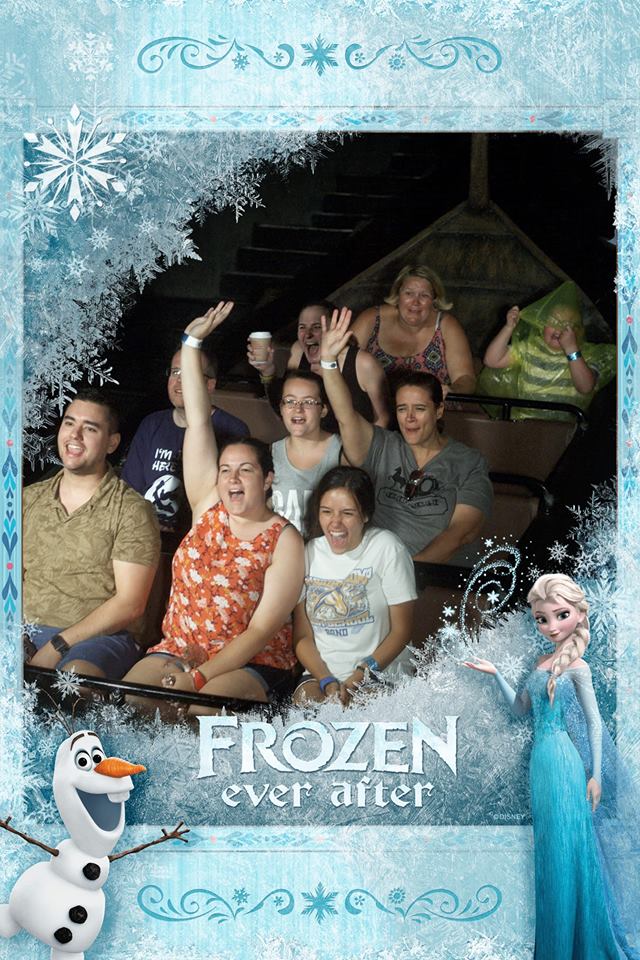 Once the fireworks were over, they led us back to the Frozen Ever After ride for a private ride without waiting.  It was 9:30 by this point so we literally were able to just walk through the queue and onto the boats.  It’s a nice little perk and cool to see Epcot at night. I also seemed to enjoy the ride far more than usual that night, most likely due to the large amount of tequila in my to-go cup. Take note of my face in the ride photo – third row back. 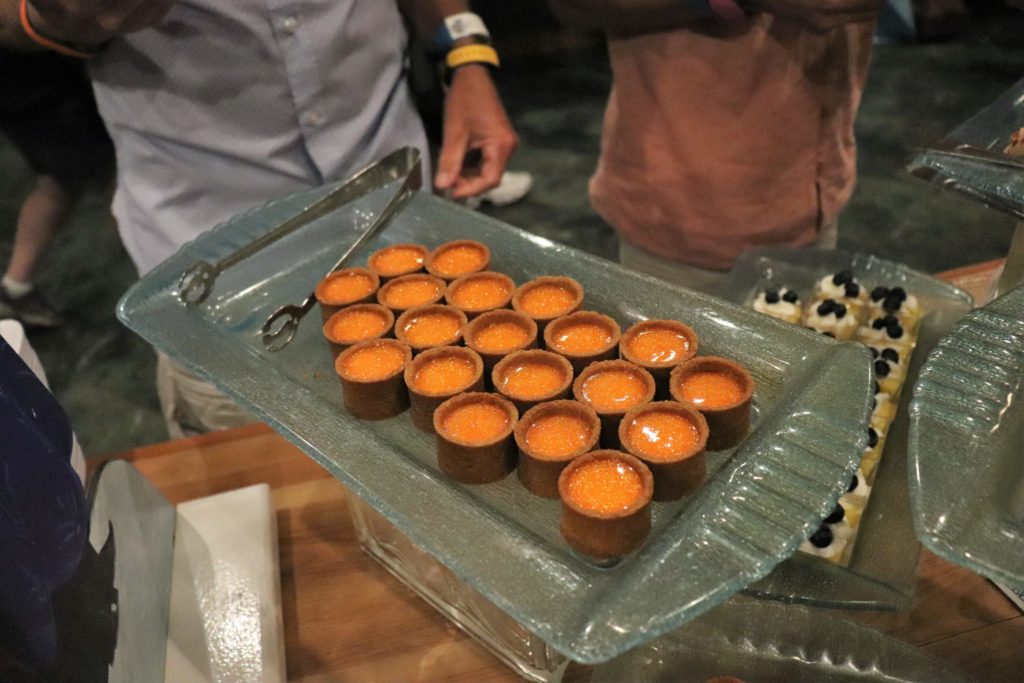 The Frozen Ever After Sparkling Dessert Party is not cheap – you’re looking at $79 per adult and $47 per child. I’m not confident that it would be worth the price to take the whole family. But from an individual perspective, I do think this was worth it for me. I made it my dinner, so I didn’t have to pay for a meal that night.  I had five cocktails at the bar.  I got to watch Illuminations from a great perspective and ride Frozen Ever After without waiting. While it doesn’t have a take home souvenir like the Star Wars dessert party, it feels like you’re getting the most bang for your buck at this one.

While I do think you’re going to see the most value if you are enjoying a couple of drinks, I would still potentially argue that it might be worth it for all of the other things included, especially if you’re visiting during a busy time and don’t want to fight for a place ahead of time for the fireworks or wait in a long line for Frozen Ever After.

What do you think of the Frozen Ever After Sparkling Dessert Party? Is this something you would want to try?