On our trip to Disney World in early September Jason and I managed to hit up every Food and Wine festival booth!  I’ve broken down our adventures into 4 separate posts.  This is part 3. Check out part 1 here, part 2 here, part 4 here, and Read more about the Epcot International Food and Wine Festival 2017 here.

Mexico always has a lot to offer, with 3 food items (a rib eye taco, tequila chipotle shrimp, and a cajeta mousse) and 5 beverages (two different margaritas, a corona with floater, Mexican Mule, and a red sangria). 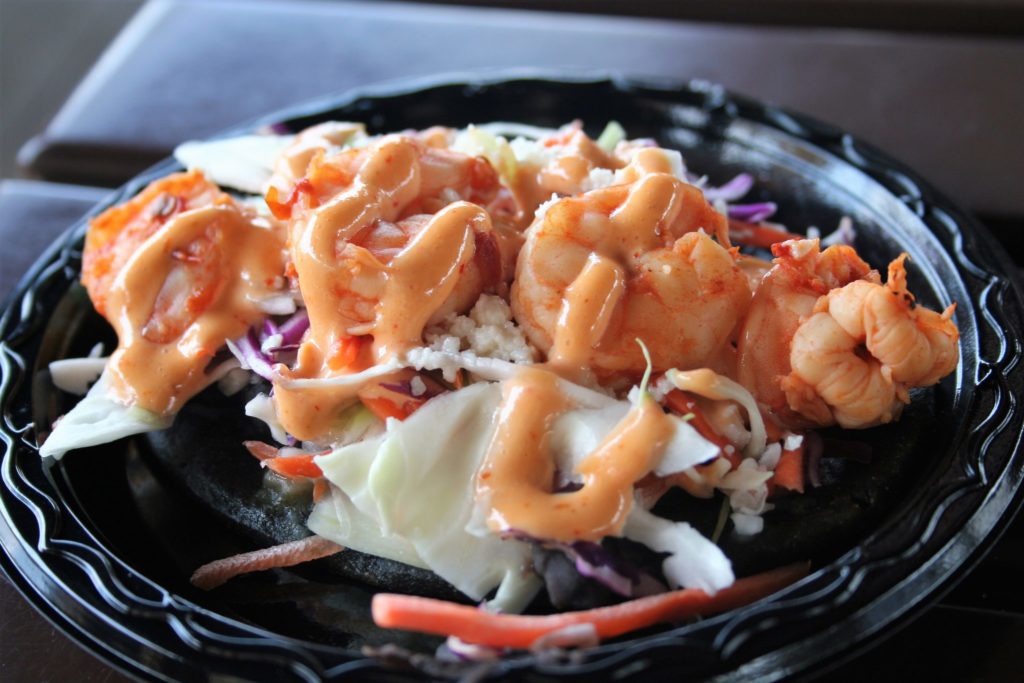 We went with the Tequila Chipotle Shrimp served on a black bean huarache garnished with red and green cabbage, queso fresco, and crema mexicana.  I really enjoyed the flavors here.  It was a little difficult to eat, as the black bean huarache was kind of crumbly and made it difficult to eat like a taco, but it was also a little tricky to take a knife and fork to it.  Worth the effort though. 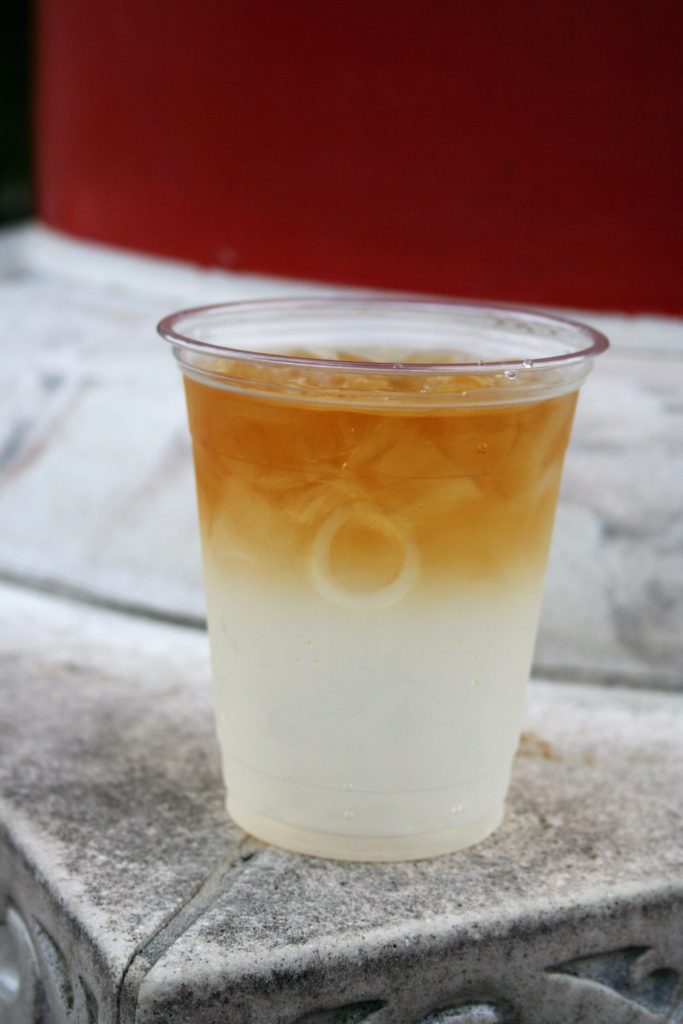 Having just eaten a lot of food items in Greece, Thailand, and Mexico, we opted for a drink when we hit China.  A lot of the options sounded good, but I chose the Ritzy Lychee with Coursoisier Cognac VS and Smirnoff Vodka.  I’m not sure what the “base” of this drink is or where exactly the lychee flavor comes from, but it was really good.  A bit of sweetness but not too sweet, and easy to drink.  I didn’t know what to expect, but I was glad I got it!

Everything in India sounded good.  We got 3 items but easily could have gotten more.  Food included Indian bread with dips, a red curry, Korma chicken, and pistachio cake.  There were also two wines, a beer, and a non-alcoholic mango lassi. 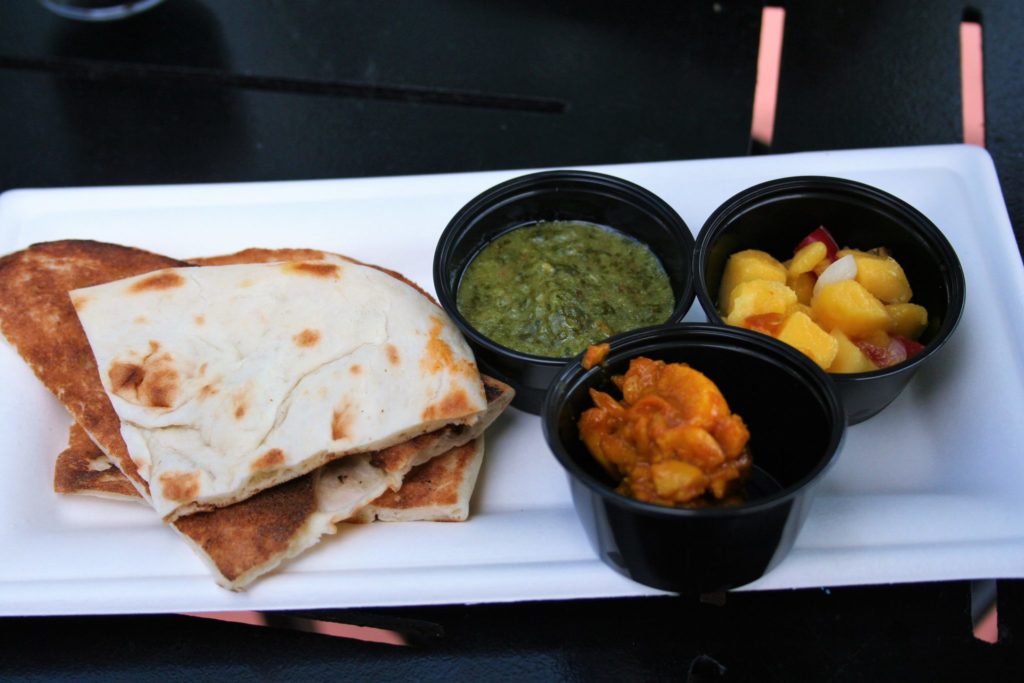 First up was the Warm Indian Bread with pickled garlic, mango salsa, and coriander pesto dips.  The bread service at Sanaa is one of my favorite things in the world, and this is basically like a mini version of that.  I enjoyed all 3 of the dips but the coriander pesto was my favorite.  This was a favorite because naan bread with dips are just great. 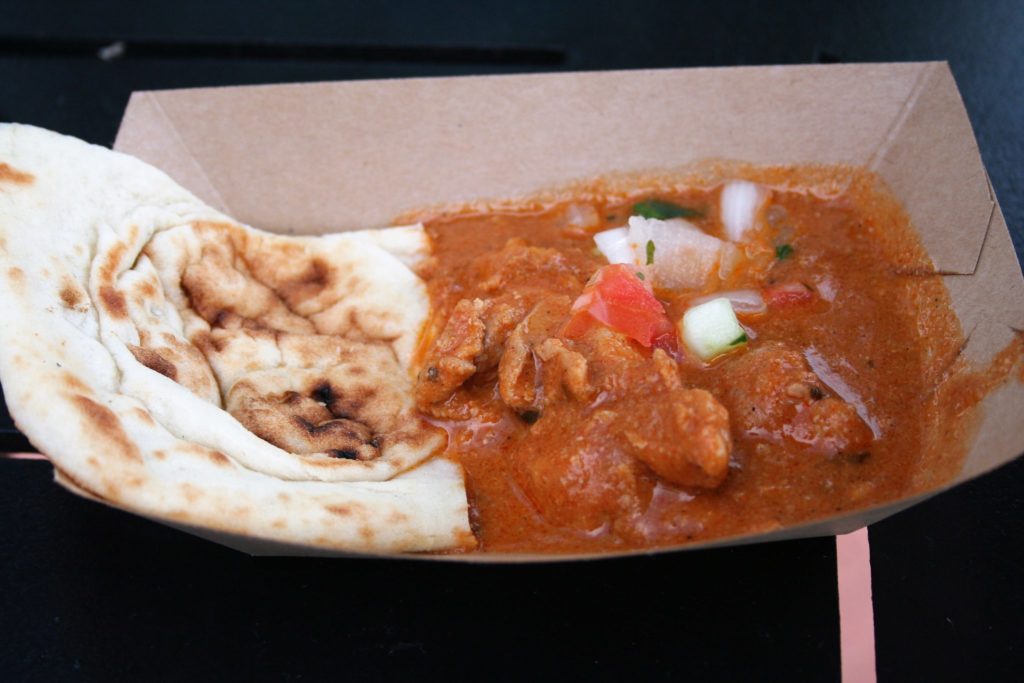 We also tried the Korma Chicken with cucumber tomato salad, almonds, cashews, and warm naan bread.  This was another tasty dish that we both really enjoyed.  I think Jason liked this better than the bread and dips, though I favored the dips.  But we both liked it a lot. 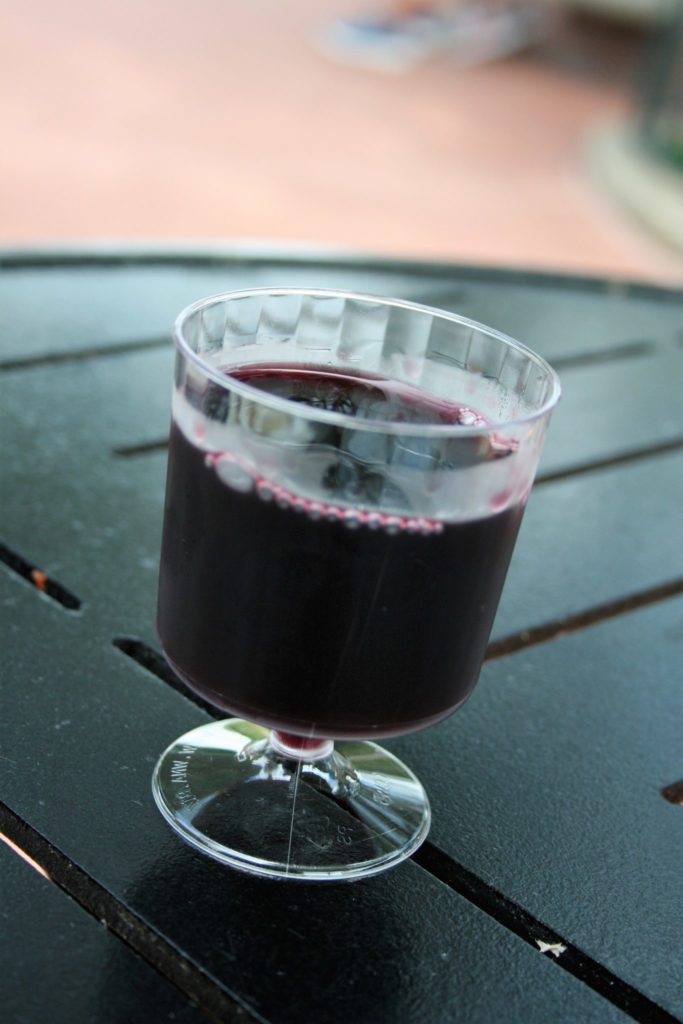 To go with our food we grabbed a glass of the Sula Shiraz.  Jason’s favorite kind of wine is shiraz and it’s not  always available so we try it when we can get it.  This one was pretty good.

This is another booth that I felt was “cheating” to put it in the passport because it’s a permanent set-up with just two extra items added special for the festival.  You can get a spicy hot dog or a Whisky and Frozen coke. 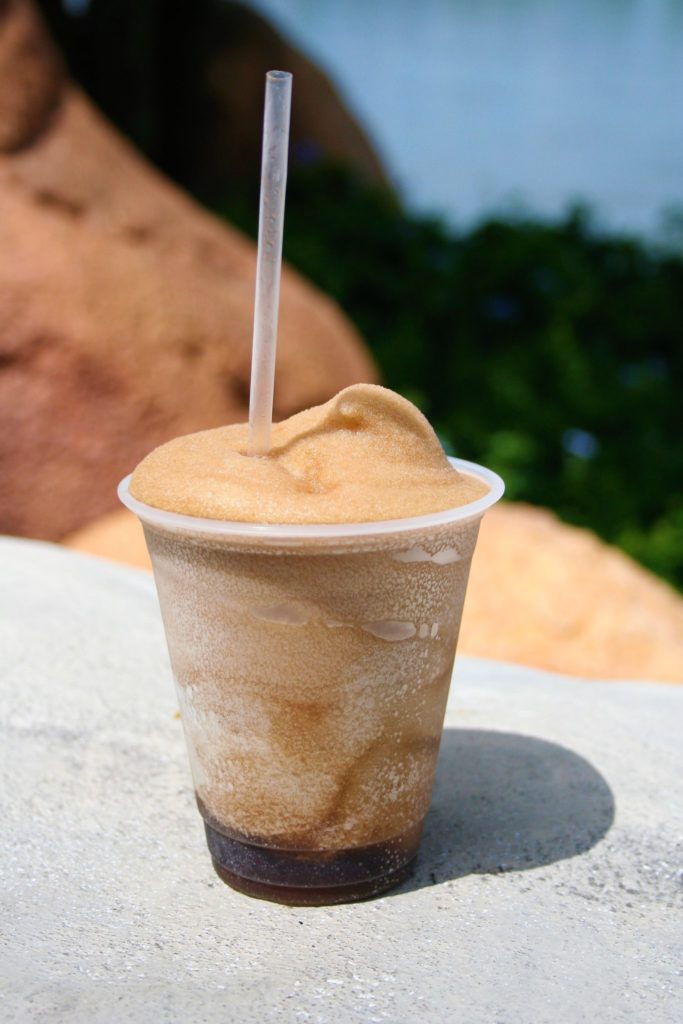 I have to admit, I’m so glad that the cool post was in the passport because I wouldn’t have stopped here otherwise.  And the Bain’s Cape Mountain Whisky and Frozen Coke was one of the best things we had at Food and Wine.  I’m not normally a whisky and coke person (though I love rum and coke), but this tasted amazing.  Maybe it also had to do with the fact that it was so hot and felt extra good when we were sweating, but I would totally go back for one of these.

We are in a particularly yummy section of Food and Wine for Jason and I – we are a big fan of Indian and African flavors, which is why the restaurants at Animal Kingdom are some of our favorites.  The Africa booth at Food and Wine has bebere-style beef tenderloin tips, an Ethiopian red lentil stew, and a spinach and paneer cheese pocket, in addition to 3 African wines (also available in a flight). 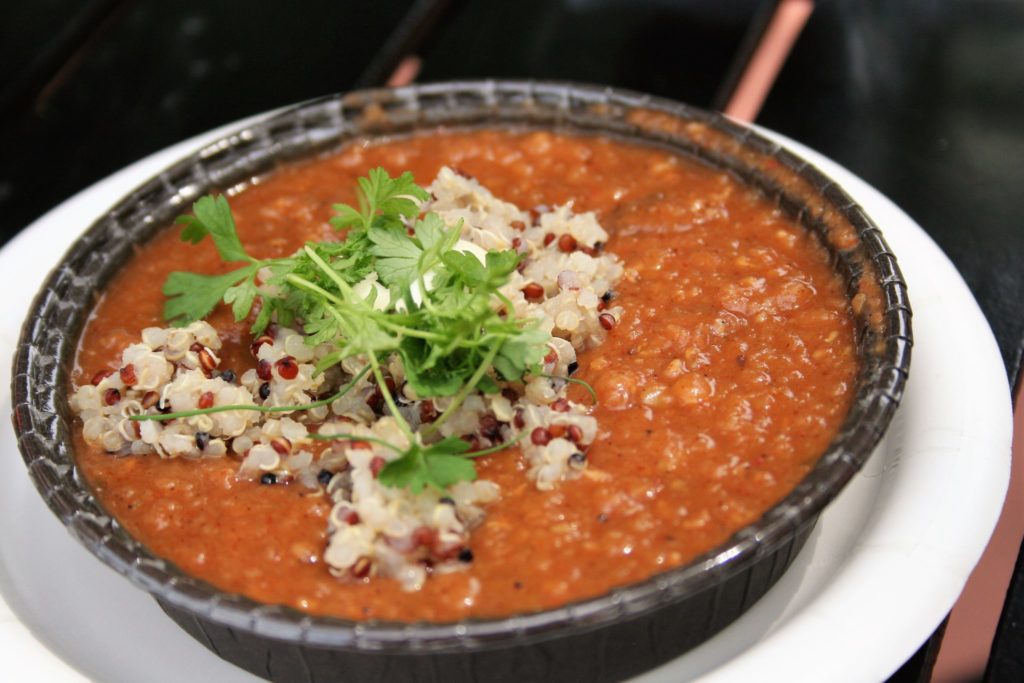 The Spicy Ethiopian Red Lentil Stew with vegan yogurt was really tasty, and it’s a great options for vegetarians.  It had a robust flavor, though I do wish our portion had more of the vegan yogurt on the top, which helped break up the stew consistency a little bit. 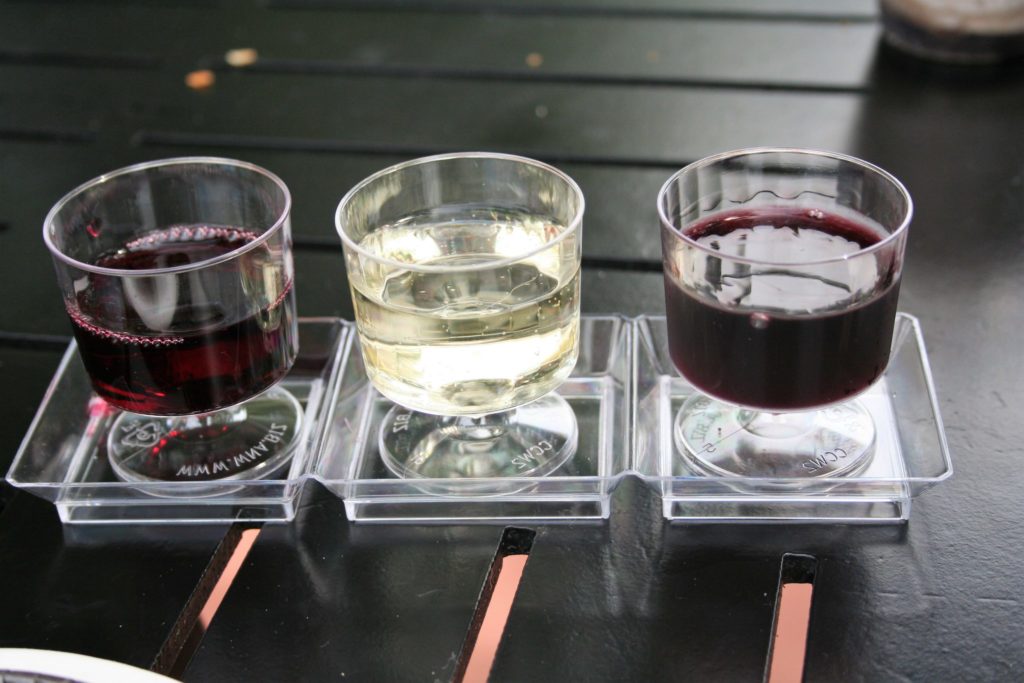 We also tried the African wine flight, which included Ernie Els “BigEasy” Chenin Blanc, Simonsig Pinotage, and Jam Jar Sweet Shiraz.  We’ve had Jam Jar many times before, as it’s one of our absolute favorite wines, so it was good to get another taste of it here at the festival!  I also really like the Chenin Blanc.  I went to the effort to write the word “yum!” next to it in my passport, and this was the only item in the festival to get that honor.  Probably to remind myself that I liked it, since the photos of wine don’t do much to help me remember the taste.  I’ll have to see if a bottle of it is available locally.  The third wine wasn’t particularly memorable in comparison to the other two.

After a wine flight of course it’s time for a beer flight!  The Brewer’s Collection has 3 beers you can either get individually as well as part of a flight.  The only food offering is a “Lebkuchenherz” gingerbread heart, which is also available at the Germany booth. 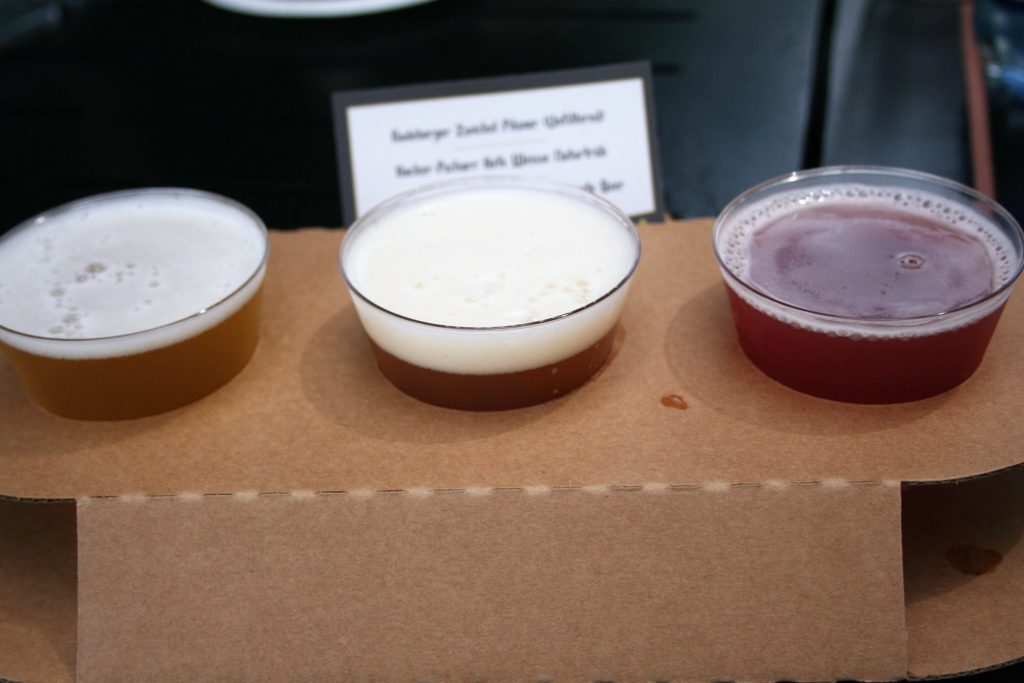 We had the beer flight, which included the Radeberger Zwickel Pilsner, Hacker-Pschorr Hefe Weisse Naturtrub, and the Shofferhofer Hefeweizen Pomegranate beer.  As a side note, it’s funny to see my spell check going crazy with all these German names – it’s one big red underline!  The pilsner I thought was all right – I gave it 3 out of 5 stars (yes, I do rate all of my beers in a beer app).  The Weisse was similarly average.  Both were enjoyable, neither really stood out to me.  I love the shofferhofer grapefruit beer, so I was very excited to try the pomegranate one.  It was sweet and delicious and I could drink a ton of it.  Which would be fine because of the low alcohol content, which is probably the biggest disappointment about that beer.  You’re getting close to the point where you might as well just drink soda or juice for a cheaper price.  But if you’re a pomegranate lover I recommend you try at least that one, and if you don’t like beer but also want to try all of the booths you’ll probably find it quite pleasant.

Here you’ll find shinkennudeln, bratwurst on a pretzel roll, an apple strudel, and the gingerbread heart mentioned above.  I suppose since it’s located right next to the Brewer’s Collection the Germany booth decided to go with wine rather than beer.  They do have the same pilsner at the Brewer’s Collection available, but most of the drinks are wines, with 3 different rieslings available. 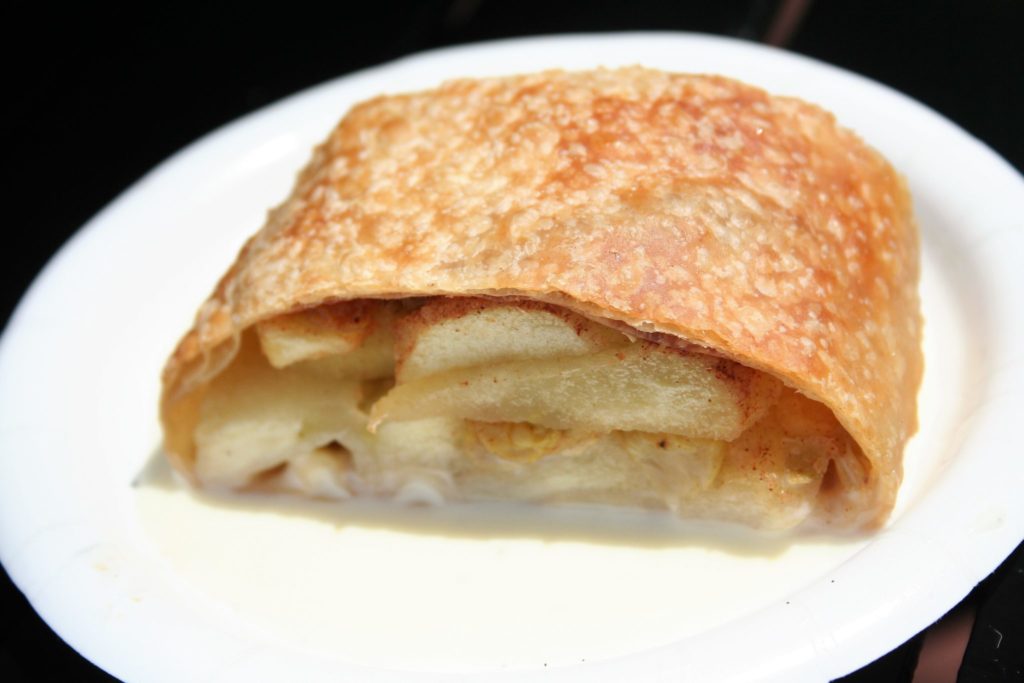 We’d been enjoying a lot of “entree” style foods that day already, so when we hit Germany we decided it was time for some dessert!  We had the Apple Strudel with vanilla sauce.  It was warm with a crispy shell and full of apple goodness.  It’s a bit difficult to see since the plate is white, but there was a pool of vanilla sauce underneath of it which really helped to enhance the flavor and make it a little more interesting.

Spain had a number of interesting sounding options.  Food choices included charcuterie in a cone, paella, seafood salad, and a sweet olive oil cake.  There are three Spanish wines available and you can also grab a wine flight. 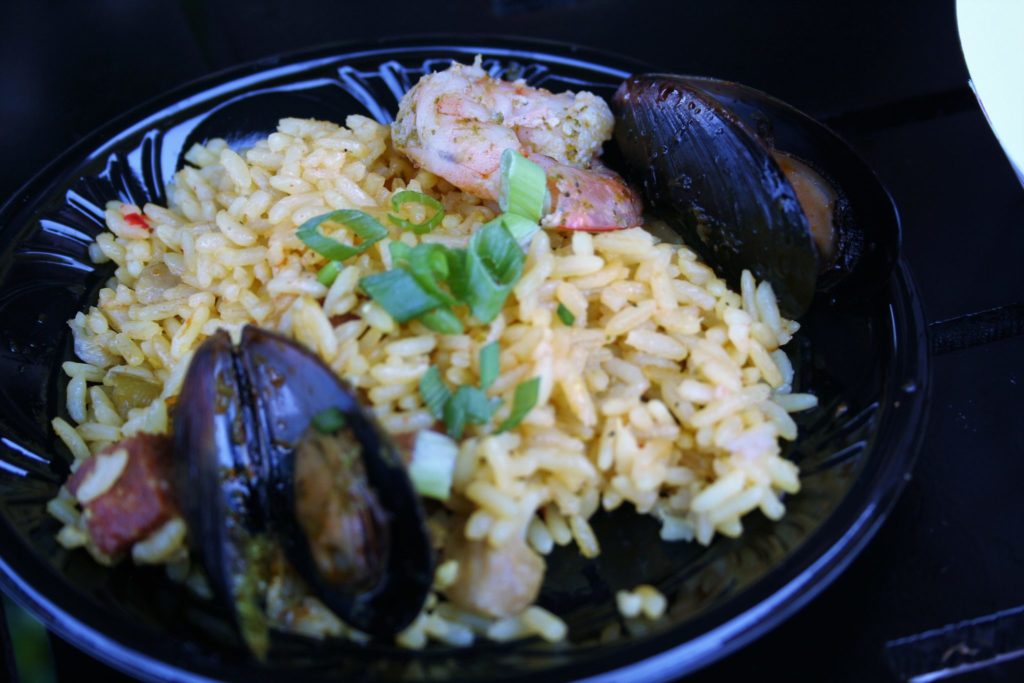 We chose the Traditional Spanish Paella with shrimp, mussels, chicken, and crispy chorizo.  While it was good, it didn’t stand out as anything special.  It seemed like a lot of rice and not much “stuff” and ended up feeling a bit boring.  The chorizo was the best part, as that was nice and flavorful, but there just wasn’t enough of it.

Italy always has options that sound delicious but then they fail to deliver.  To many it is notoriously the worst booth of the festival.  I saw photos of the calamari they were offering and it looked extremely unappetizing to me.  In addition to the calamari they have a beef stew with polenta, penne vodka, and a chocolate cannoli.  There are a ton of drink options here but oddly no brand names which may speak to the quality.  Unlike every other booth which lists the winery, here you can simply get “Pinot Grigio.”  No word on where it’s from.  Also available is Chianti, prosecco, corbinello, moscato, a frozen margarita with limoncello and tequila, and two Moretti beers. 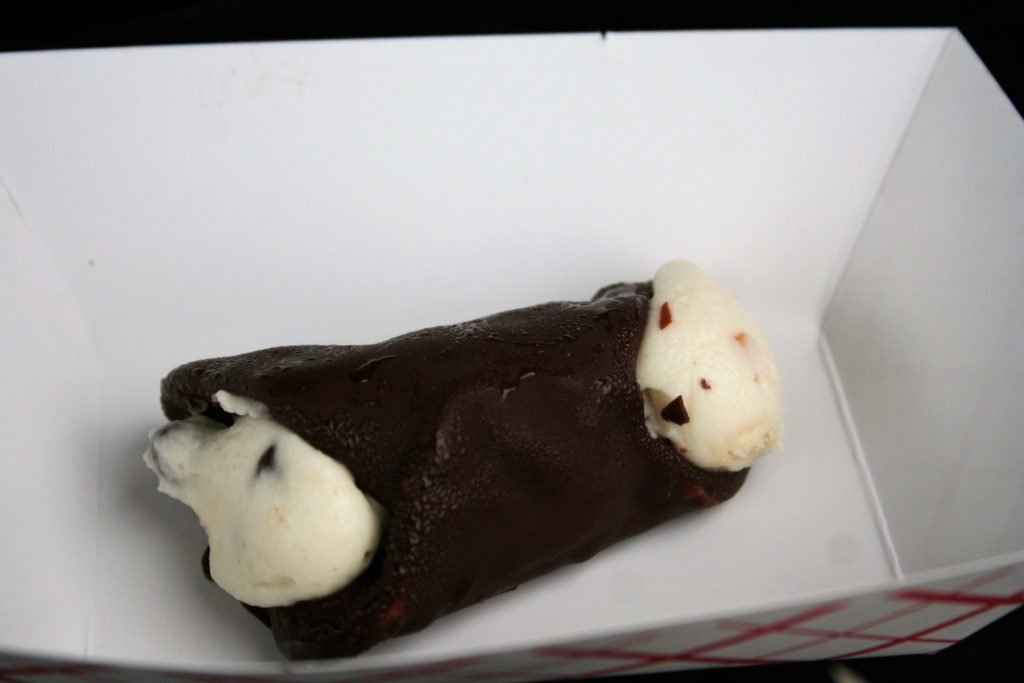 The biggest complaint about the Italy food is that it’s all pre-prepared, frozen, and then thawed and served, rather than made in the booth itself.  I figured it would be hard to mess up a cannoli, even a frozen one, so I went with Cannoli al Cioccolato: chocolate-covered cannoli filled with sweet ricotta, choolate, and candied fruit.  And it was actually very good!  I really enjoyed the chocolate coating and it tasted like a typical cannoli with the added bonus of fruit.

This beer cart in the American Adventure is open throughout the year, and I’m not sure what was specific to the festival.  The passport listed the Hanson Mmmhops pale ale, a hard cider, an IPA, porter, bourbon barrel ale, Victory Golden Monkey (which is a brewery local to us here, about 20 minutes away), and the “Killer Whale Cream Ale.”  There was also a spiked tea. 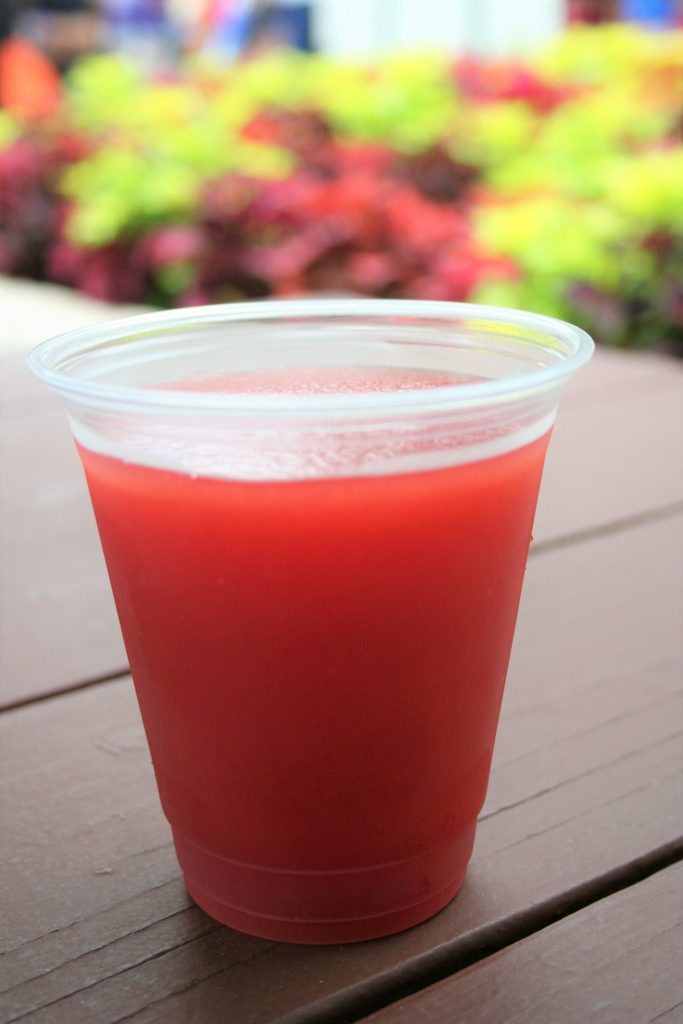 We actually got the Frozen Spiked Tea with Orlando orange vodka.  Though I’m a beer lover, we visited the Hops and Barley booth at the same time and decided to get beer there since they had a flight available.  The consistency of this was like a slushy, and it was very sweet.  I couldn’t taste much alcohol, so it basically tasted like a sweet orange slushy.

Which of these food or drink items sounds the best to you?