On our trip to Disney World in early September Jason and I managed to hit up every Food and Wine festival booth!  I’ve broken down our adventures into 4 separate posts.  This is part 4. Check out part 1 here, part 2 here, part 3 here, and Read more about the Epcot International Food and Wine Festival 2017 here.

Let’s see what America has to offer: food items include a lobster roll, beef brisket and pimento cheese, and carrot cake.  Beverages are 3 different beers, a chardonnay, and a red blend. 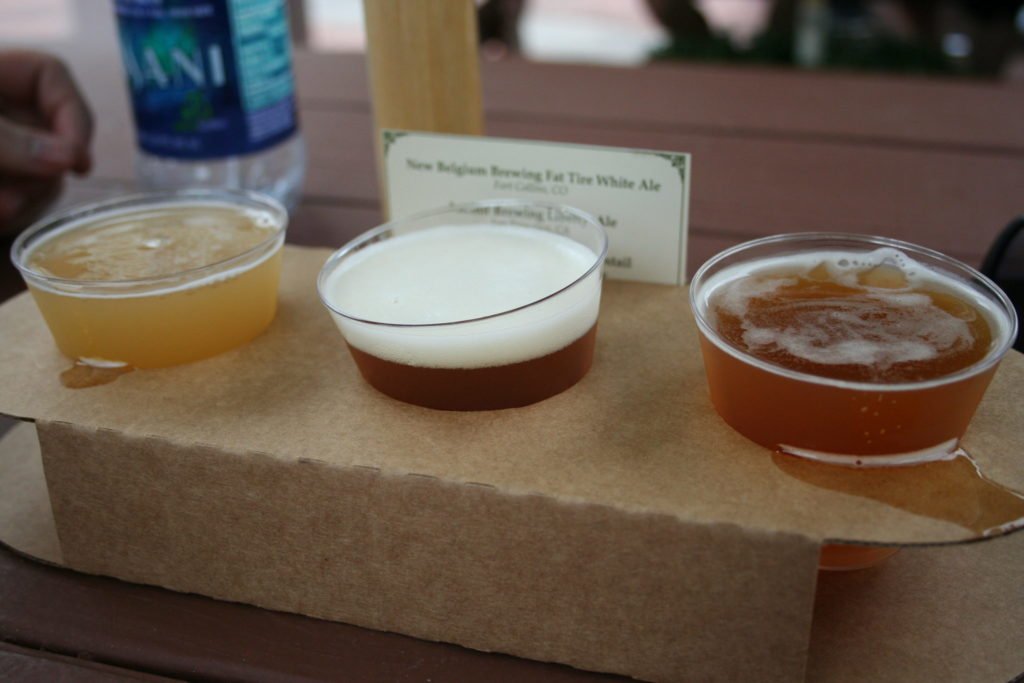 The lobster roll sounded really good, but in the end our budget and our stomachs had us go with the beer flight instead.  It included the New Belgium Brewing Fat Tire White Ale, Anchor Brewing Liberty Ale, and the Orange Blossom Brewing Foxtail Cold Brew Coffee Pilsner.  The coffee pilsner was the most unique of these and had a really nice cold coffee taste.  I appreciated the fact that it wasn’t a super dark beer like most coffee beers are.  The Liberty Ale sounds fittingly patriotic but tasted rather bland and boring.  The Fat Tire is normally an amber/red ale, but this special edition for the festival was a decent white wheat beer.

For some reason Japan’s items seem more expensive than a lot of the others.  There are wasabi shumai steamed pork dumplings, and salmon BLT sushi roll, and Teriyaki ginger pork as the food options.  Drinks include a Pom Pineapple sake cocktail, two other sakes, and the Sapporo Lager. 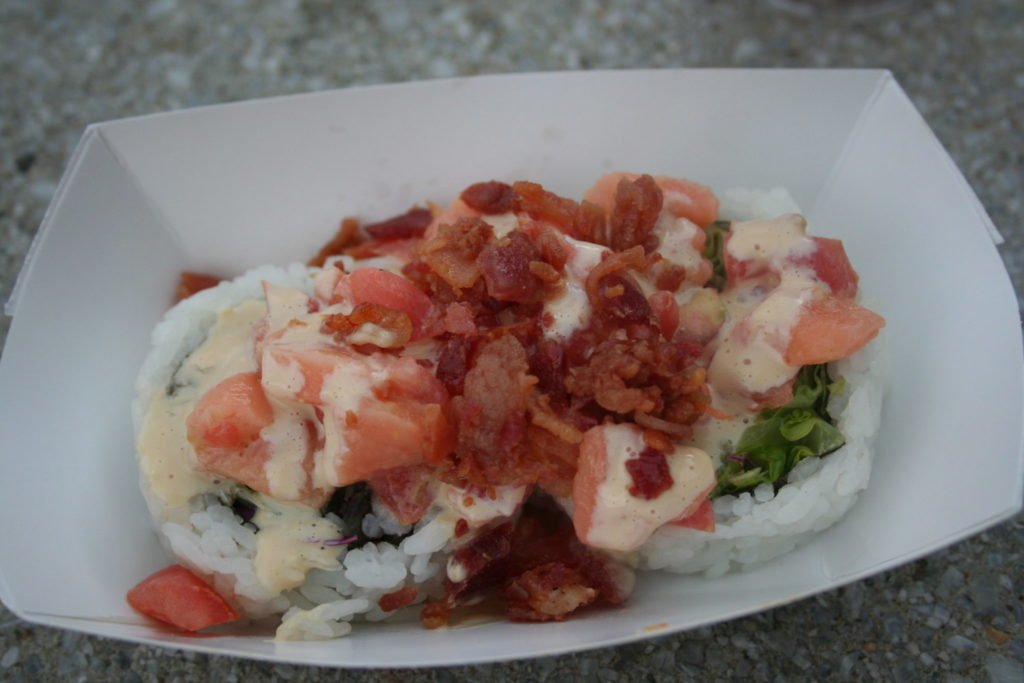 The Salmon BLT Sushi roll sounded the most intriguing.  It was a futomaki roll with lettuce, cucumber, cabbage, and carrots topped with yuzu miso salmon, tomato, and bacon chips.  This surprisingly did taste just like a BLT with rice.  The salmon was good if you had a bite on its own, but with the bacon and tomato and sauce I thought it was a lighter salmon where the flavor didn’t come out as much.  I appreciated all of the bacon too. 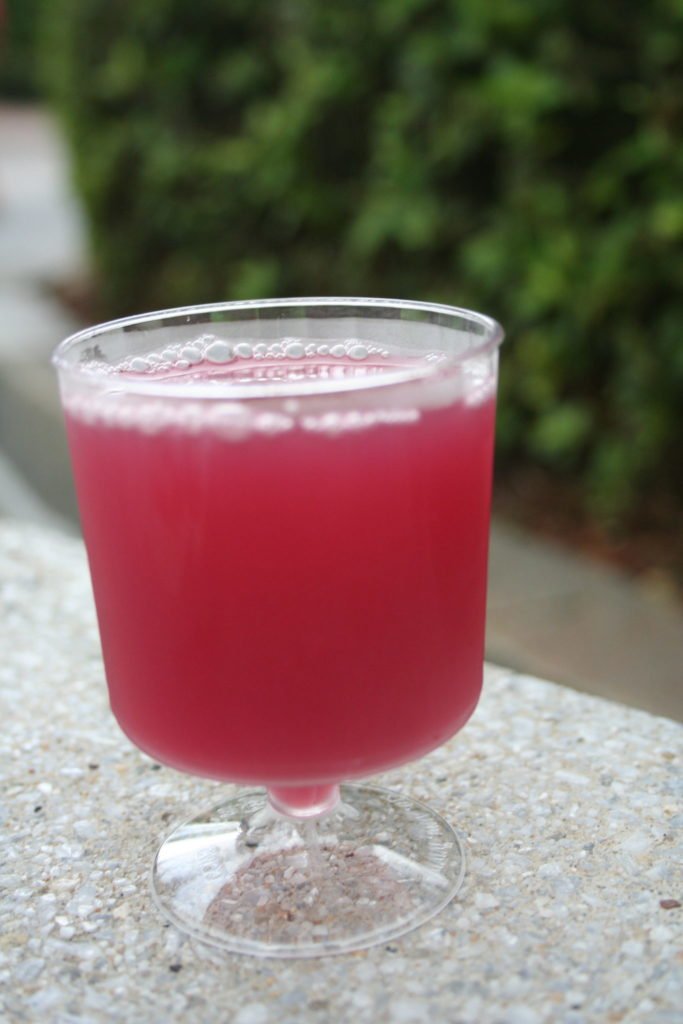 We also got a beverage here, choosing the Pom Pineapple sake cocktail.  This was refreshing but very sweet.  I don’t know that I tasted much sake at all, but it was fruity and good if that’s the kind of cocktail you’re looking for!

Here in Morocco you can find a Kefta pocket, spicy hummus friends, and chocolate baklava.  The drinks include a mimosa royale, white wine, Moroccan sangria, and Casa pale lager. 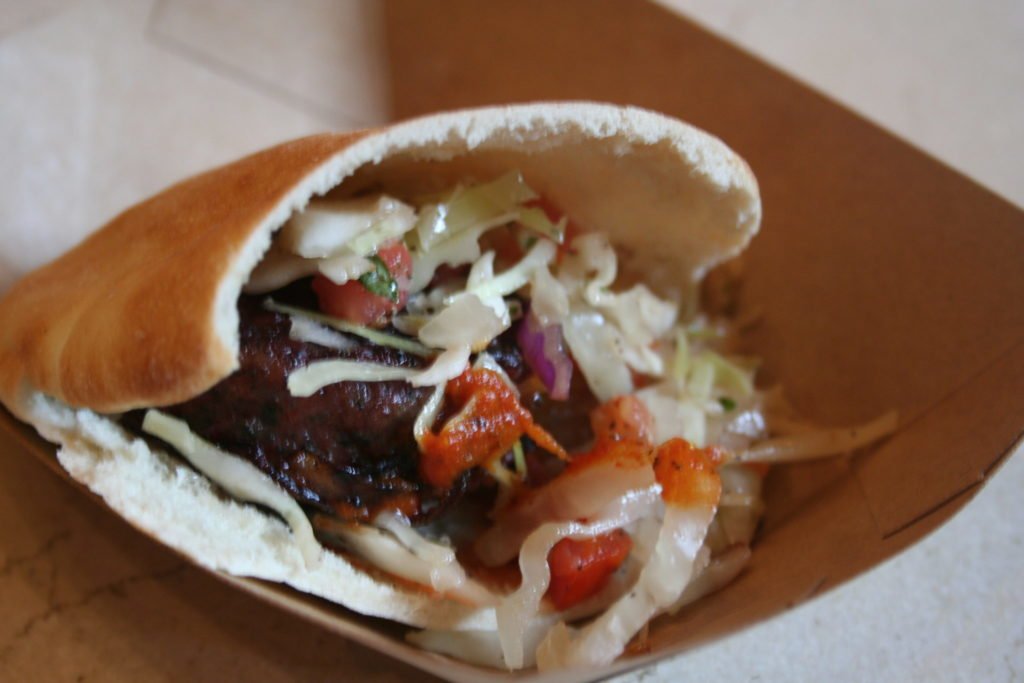 We hit up Morocco on a day when Jason was very hungry.  I held the table while I sent him off to visit the Morocco booth and told him I was fine with any of the options, to just pick the one he liked the most.  So of course he came back with two.  First was the Kefta Pocket: seasoned ground beef in a pita pocket.  It was pretty good, but I was surprised that it wasn’t ground meat like you’d get in a taco or something, but rather one big chunk like a small hamburger patty.  I had a couple of bites but let Jason eat most of it. 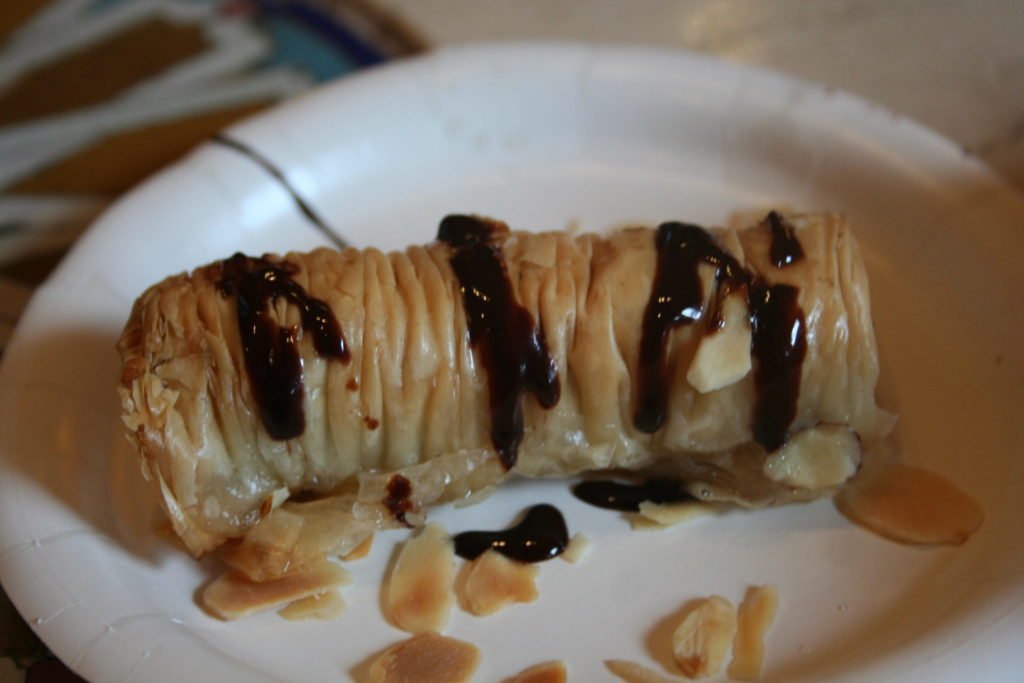 He also picked up the Chocolate Baklava: rolled phyllo dough with toasted almonds and dark chocolate sauce.  This was pretty tasty as it had lots of things I like.  I enjoy baklava, and adding chocolate and almonds made it even better.

It’s not surprising that the main focus in Belgium is on Belgian waffles.  You can get one with either chocoalte ganache or berry compote.  There’s also a beer-braised beef, two beers, and hard cider, and chilled coffee with chocolate liqueur. 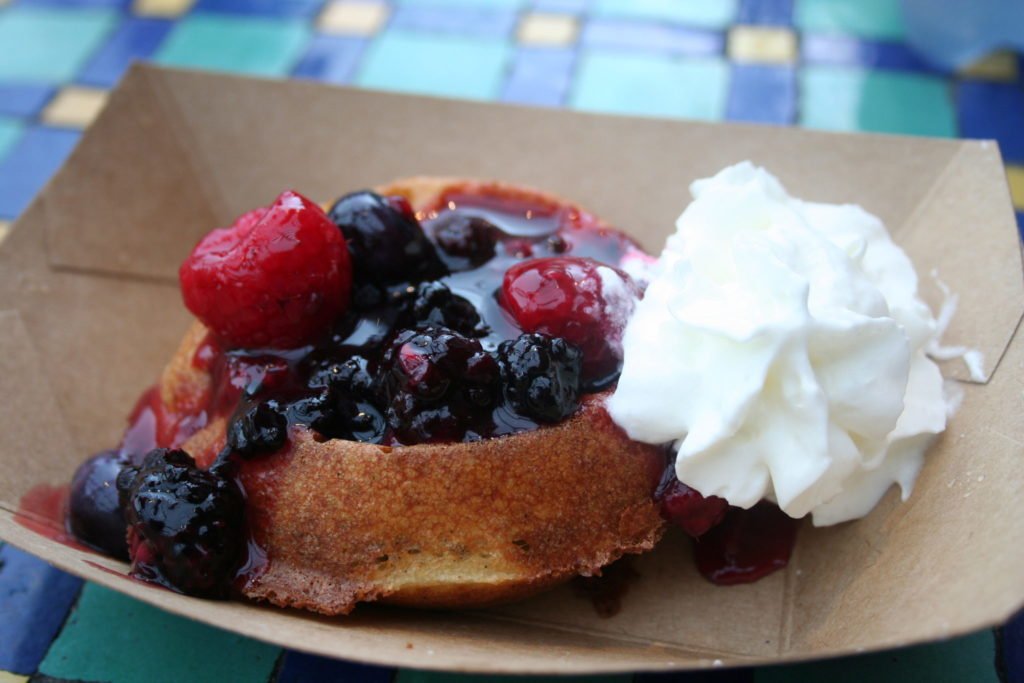 I picked up the Belgian Waffle with Berry Compote and whipped cream.  It really is a delicious waffle, warm and crisp.  My mouth is watering right now just thinking about it.  The berry compote on top is sweet and vibrant and perfect.  It’s not one of the more unusual offerings at the festival but it’s certainly tasty. 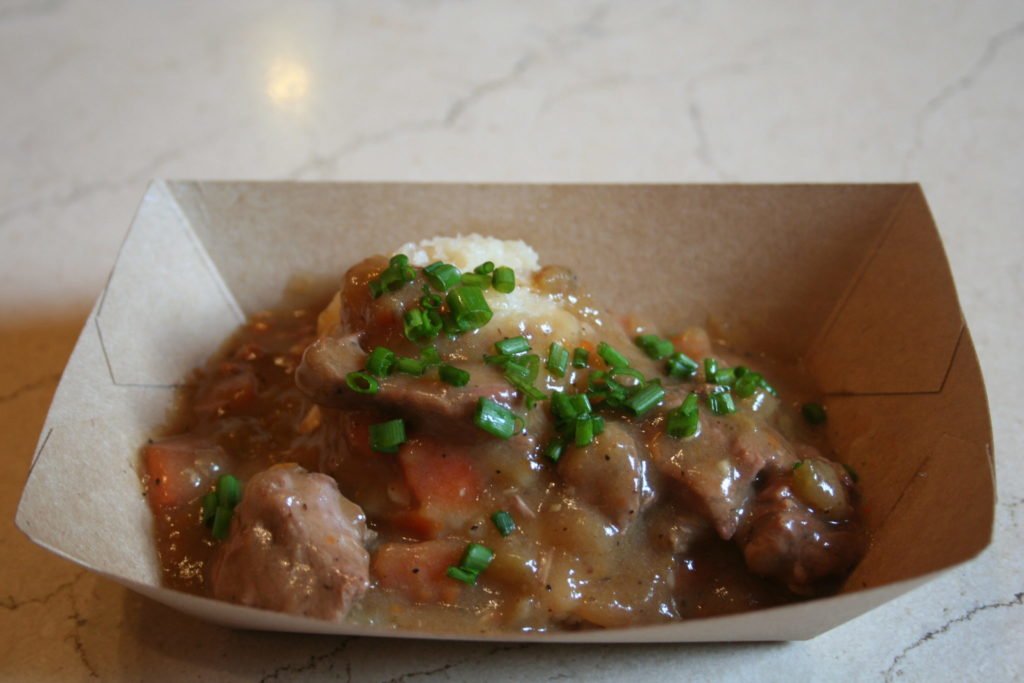 This was all we originally planned to get in Belgium, but the man behind me on line had just gotten the Beer-braised Beef with smoked gouda mashed potatoes.  He liked it so much he came back for two more orders of it, so of course I had to try it.  I believe his words were, “forget everything else at the festival.  I just want more of this – even more than I want to drink!”  Anyway, it was good, though not necessarily my “style” of dish so I wouldn’t rave about it in quite the same way.  It had  strong beer flavoring which I did enjoy.

Food items here include the Escondidinho de Carne, a crispy pork belly, and cheese bread.  There are three different drink options, including a black beer, chardonnay, and frozen caipirinha. 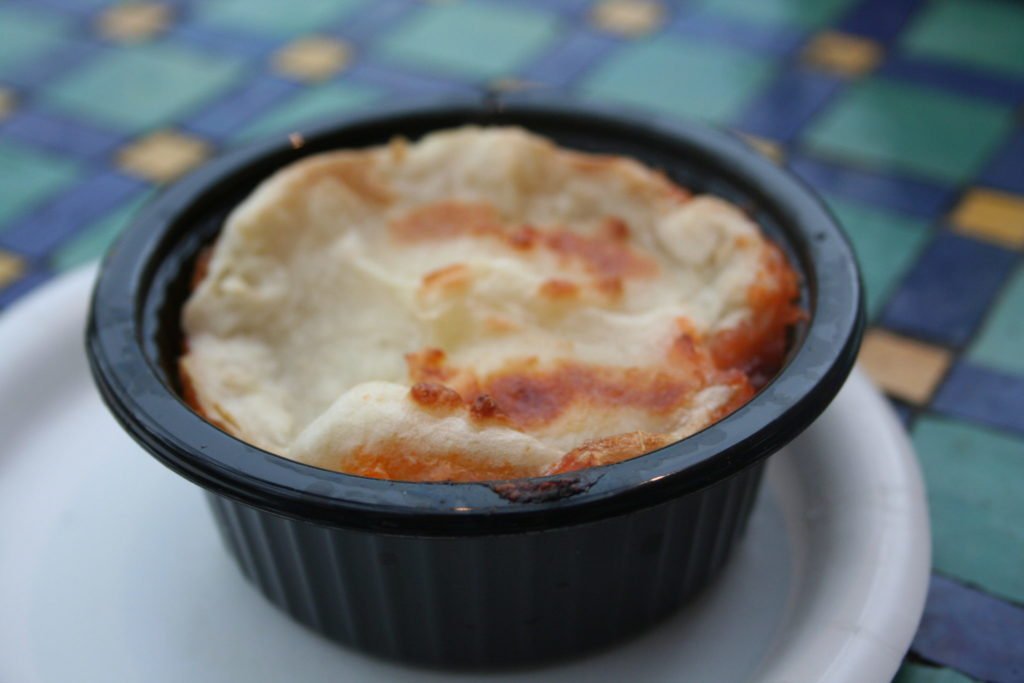 I’d heard decent early reviews of the Escondidinho de Carne – “Little Hidden One.” A layered meat pie with mashed yucca.  So that was our item of choice here in Brazil.  From the description and photos it sounded and looked like it was a shepherd’s pie.  And well – that’s basically what it tasted like too.  It was good, but I was hoping for more flavoring and spices that would be associated with Brazil rather than the more straight forward flavors that I got.  I did enjoy the yucca on top and actually wish there was more than that rather than more of the meat.

Lots of options in France.  For food you can get a goat cheese pudding, escargot croissant, beer bourguignon, or a creme brulee.  Drinks include a martini slush, chardonnay, merlot and cabernet blend, St-Germain sparkling kir, and the 1664 pale lager. 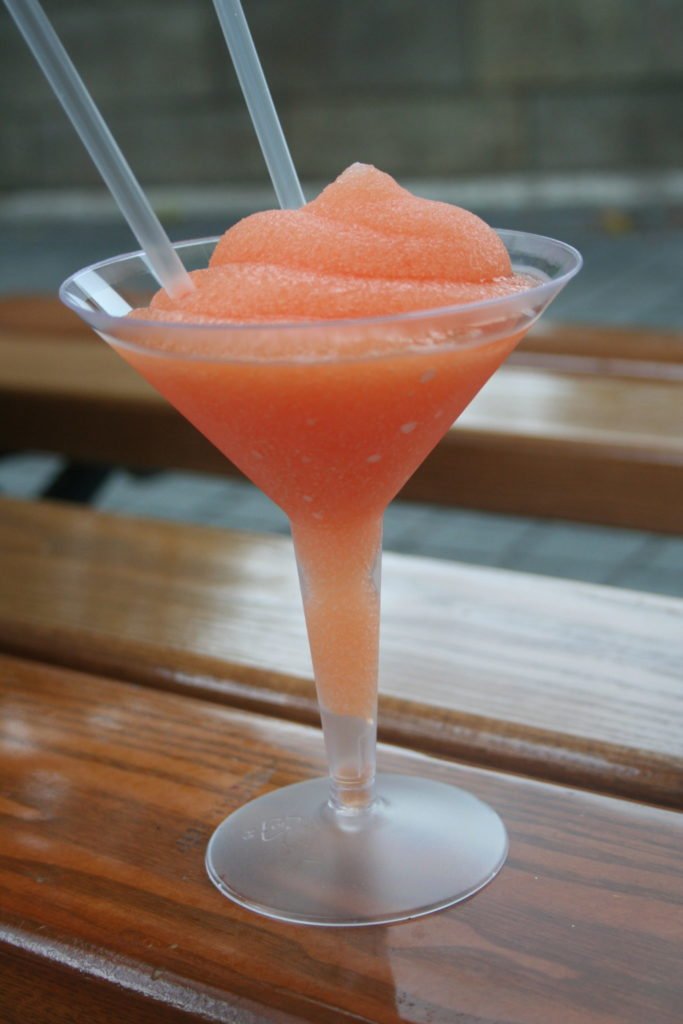 There were a couple of food items I would have been interested in training, but we were towards the end of the Festival by this point and the bill for the week was high.  So rather than the 2 food items and 1 drink I actually wanted here, I just went with the one drink.  Since I love the Grand Marnier slush they have year round, I couldn’t pass up the chance for the La Passion Martini slush with vodka, Grey Goose Le Citron, and cranberry and passion fruit juice.  Even in the rain this was a very enjoyable beverage.  You can’t tastle much alcohol, but it was tart and cold and good. 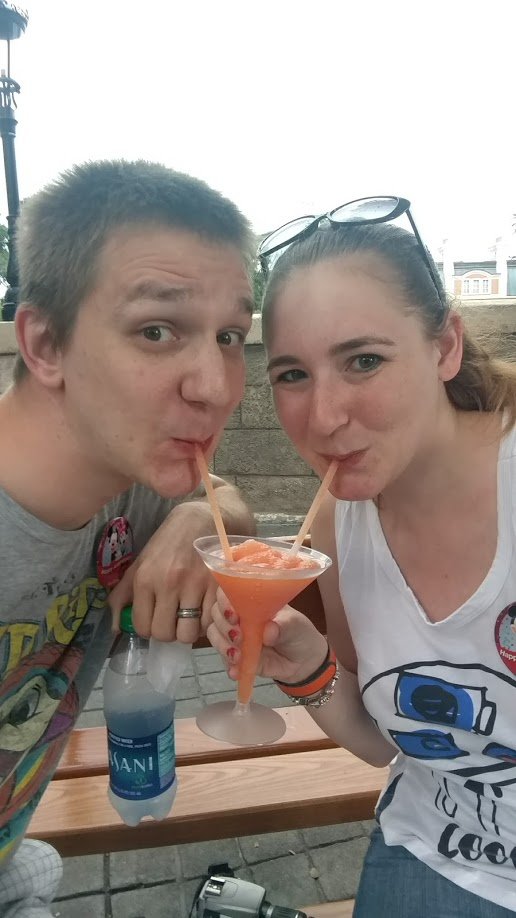 And I’m pretty sure Jason and I looked adorable drinking it together with two straws.

Since we entered the World Showcase through the Boardwalk entrance, this was actually the very first booth we stopped at on our first day there.  So everything looked and sounded good.  Food options were a roasted Irish sausage, Irish cheddar cheese and stout dip, and a warm chocolate pudding.  Beverages included a pumpkin chai tea and caramel shake (available in both an alcoholic and non-alcoholic version), honey wine, and a  Guinness blonde lager. 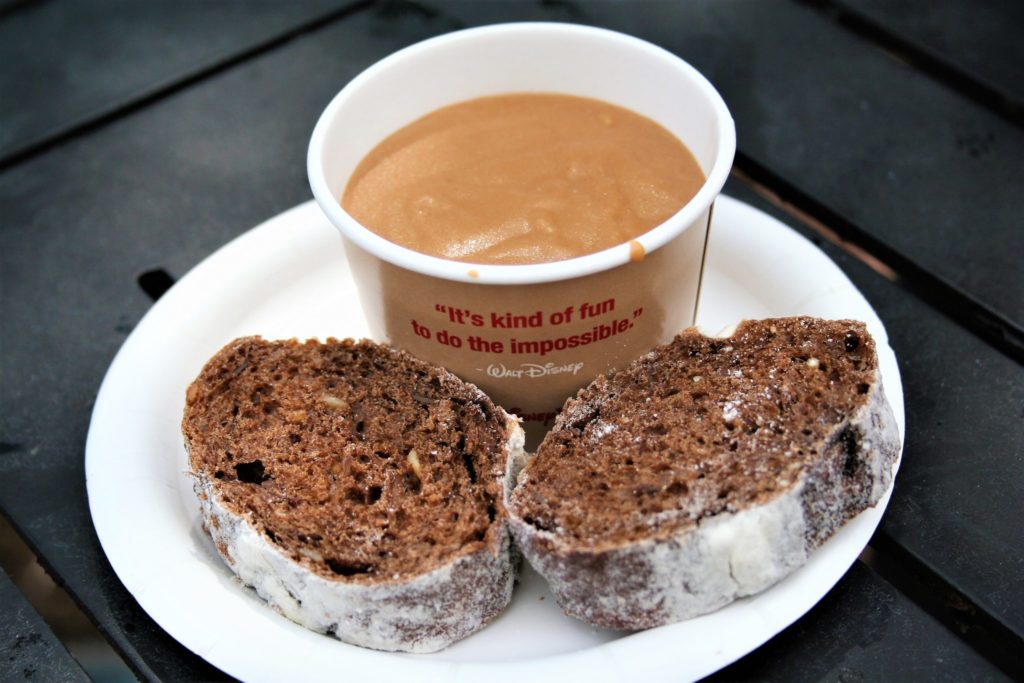 I can’t say no to beer, cheese, and bread, so we tried the Warm Irish Cheddar Cheese and Stout Dip with Irish brown bread.  The dip had a really rich flavor of beer and cheese, which was nicely balanced.  The bread went well with it, but there wasn’t nearly enough of it.  We only got to eat about half of the dip with the bread.  I finished the rest with a spoon. 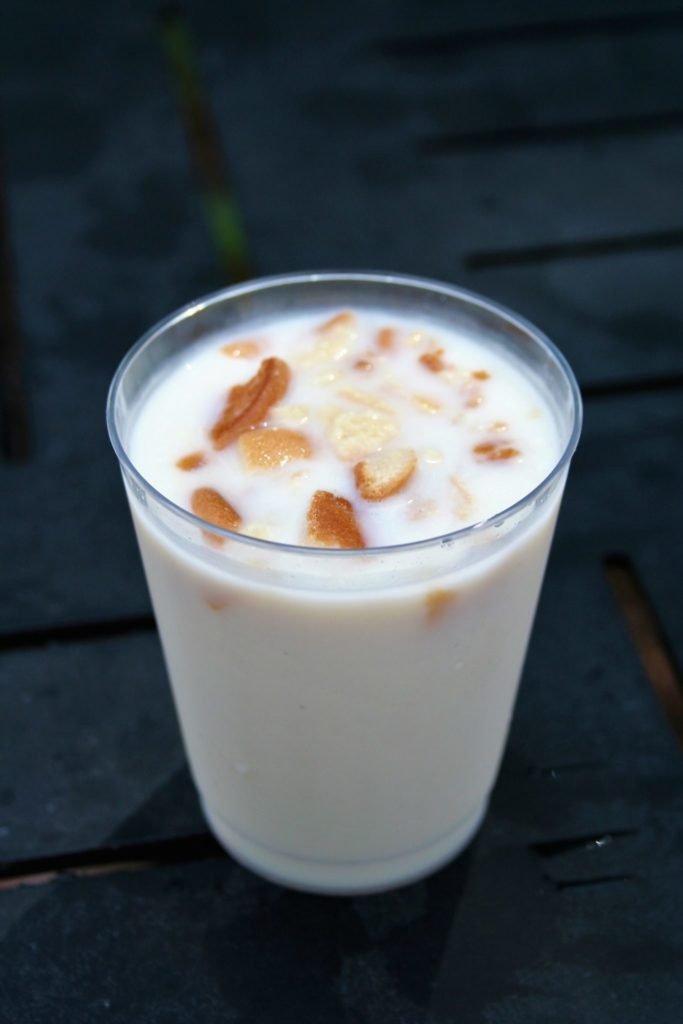 I also tried the Twinings Pumpkin Chai Tea Frozen Cocktail with caramel vodka.  This was an intense drink.  It had great flavor but was not something I could just suck down quickly.  It was best in small sips.  If you like the “taste” of fall I think this will be a win for you.

Food items here include a fresh potato pancake, Scottish lamb stew, and “The Tipsy Laird,” which is a dessert.  There are two drinks: Bellhaven Brewery Scottish Ale, and the Citrus Thistle cocktail. 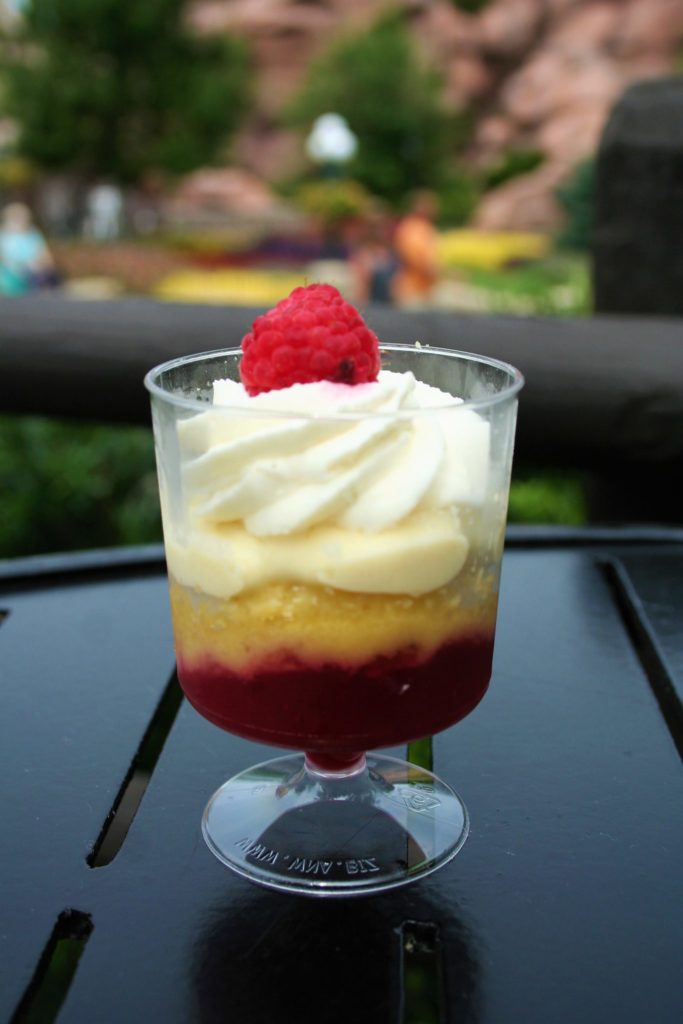 Jason and I couldn’t come up with a satisfactory agreement about what to get here.  He was leaning towards the pancake (which had smoked salmon and sour cream, neither of which I really care for) and I would have chosen the beer (he’s not a big beer drinker).  But then we saw someone walk away from the booth with The Tipsy Laird and our decision was made.  It’s a whisky-soaked cake with lemon cream and toasted oats.  The description doesn’t mention it, but there’s also a good amount of raspberry puree as well.  The combination of lemon and raspberry is always a win for me, and add in the whisky-soaked cake and you’ve got a really good dessert.

Canada may very well be one of the most popular booths at the festival, featuring two beloved favorites with Disney fans.  It’s here that you’ll find the Cheddar Cheese Soup with a pretzel roll and the “Le Cellier” wild mushroom beef fillet mignon.  Drinks include a Moosehead Radler, apple ice wine, and the Fielding Estate Red Conception.

I’d heard great things about both food items but I don’t do mushrooms, so rather than getting both I just had the Canadian Cheddar Cheese Soup served with a pretzel roll.  I know it’s way over-hyped but it really is delicious, especially with that pretzel roll.  Though I feel like it would be even better with bacon on top.  I guess the vegetarians wouldn’t like that though. 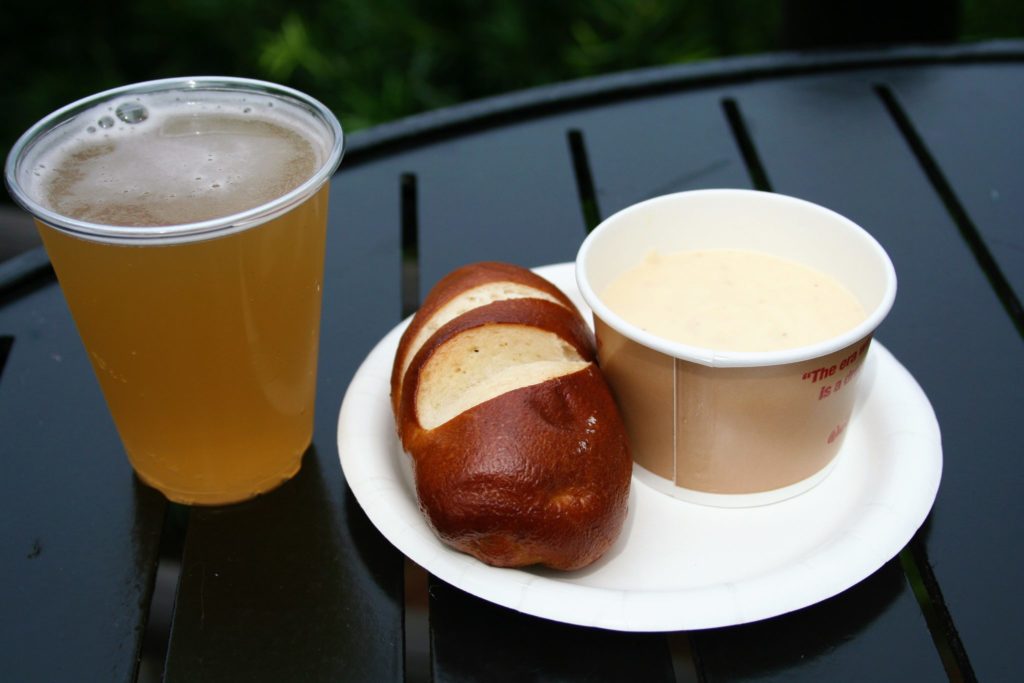 We also got the Moosehead Radler: lager infused with grapefruit, grape, and lemon juices.  If you’ve ever had Leinenkugel’s Summer Shandy, I thought it tasted a lot like that.  A good summer beer, especially for people who don’t like typical strong beers.

This was another one that felt like it was “cheating” to put it in the passport, since the Joffrey stands are always around.  There are 4 of them in Epcot and each had 1 specialty drink specific to the festival.  So you could get a spiked chai latte, passion-rita, frozen strawberry-lemonade sunset, or Kahlua-tini iced coffee. 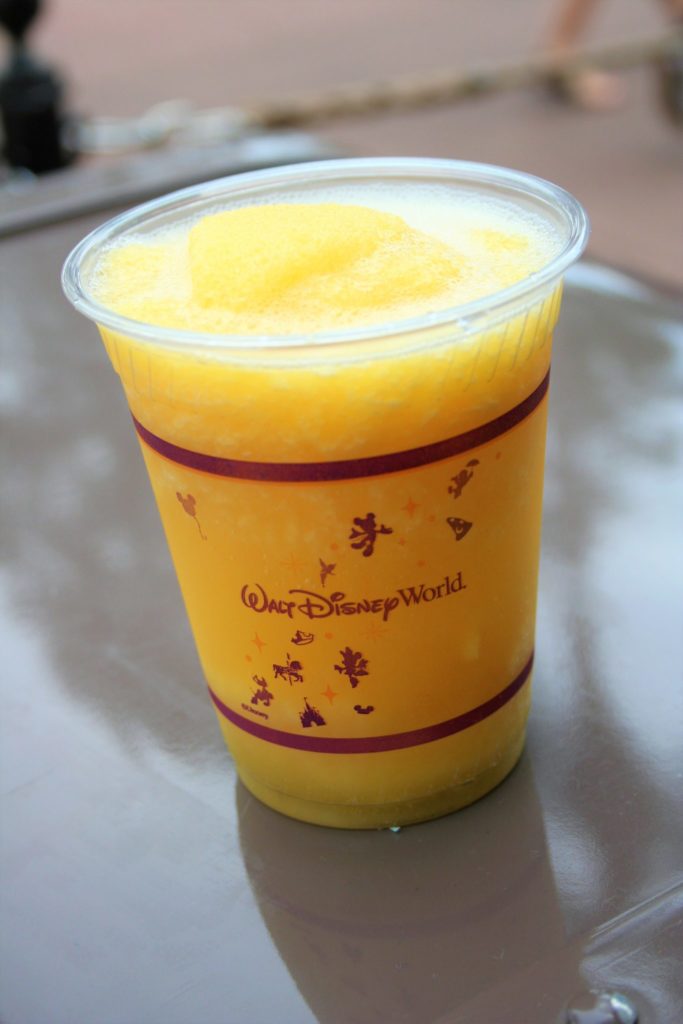 The Passion-rita was my choice, as we were close to the booth, I like margaritas, and I like passion fruit.  It’s described as such: frozen passion fruit thrills with juicy sweet flavors, and a hint of tartness, blended with 1800 tequila.  Unfortunately it didn’t taste quite as good as the description made it sound.  Instead of being a tasty frozen beverage it was a very icy consistency.  The consistency made it rather unappealing, though the flavor was all right.

And that concludes our time at the Epcot Food and Wine Festival, and managing to visit every single booth listed in the passport!  We had over 40 food and drink items while we were there, and I’d say it was a successful trip!

Which of these food or drink items sounds the best to you?