On our trip to Disney World in early September Jason and I managed to hit up every Food and Wine festival booth!  I’ve broken down our adventures into 4 separate posts.  This is part 1, featuring the first 10 booths.  Read more about the Epcot International Food and Wine Festival 2017 here.

The description of this booth says “As we celebrate the 35th anniversary of Epcot this October 1st, we invite you to enjoy these menu items inspired by the flavors of our past.”  The booth features a scotch egg, a “handwich,” and L’orange cotton candy. 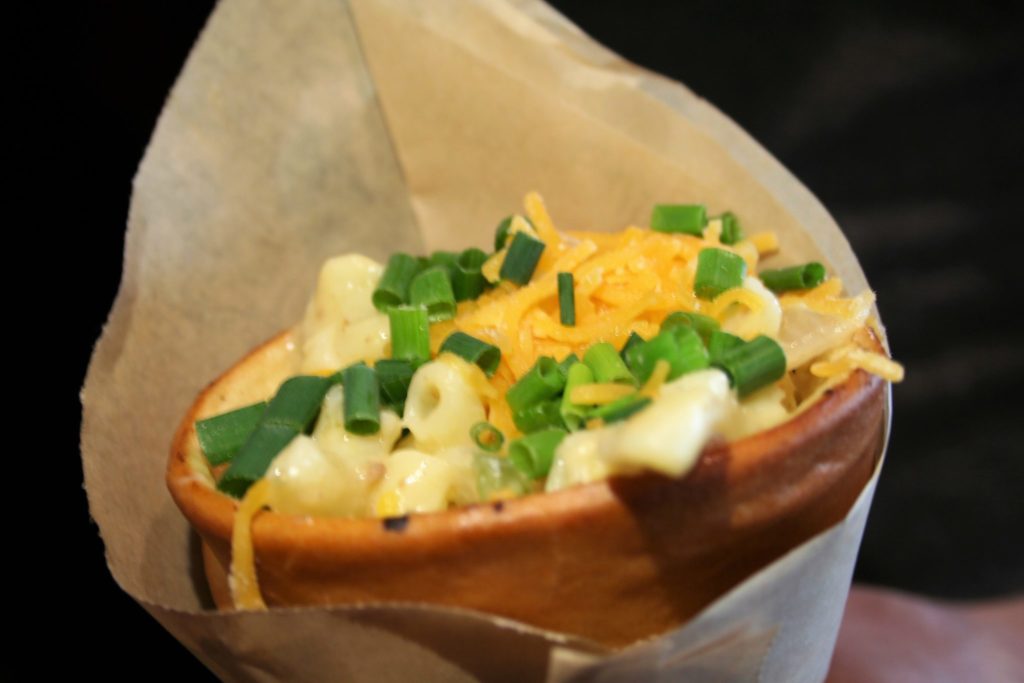 We tried the Zesty Cheeseburger and Cheddar Cheese Macaroni Handwich.  This one gets a special star from me, marking it as one of my favorites from the festival!  The “handwich” made it a little more difficult to eat, but the flavors were delicious.  I didn’t know cheeseburger and mac and cheese would go so well together, but I shouldn’t be surprised! 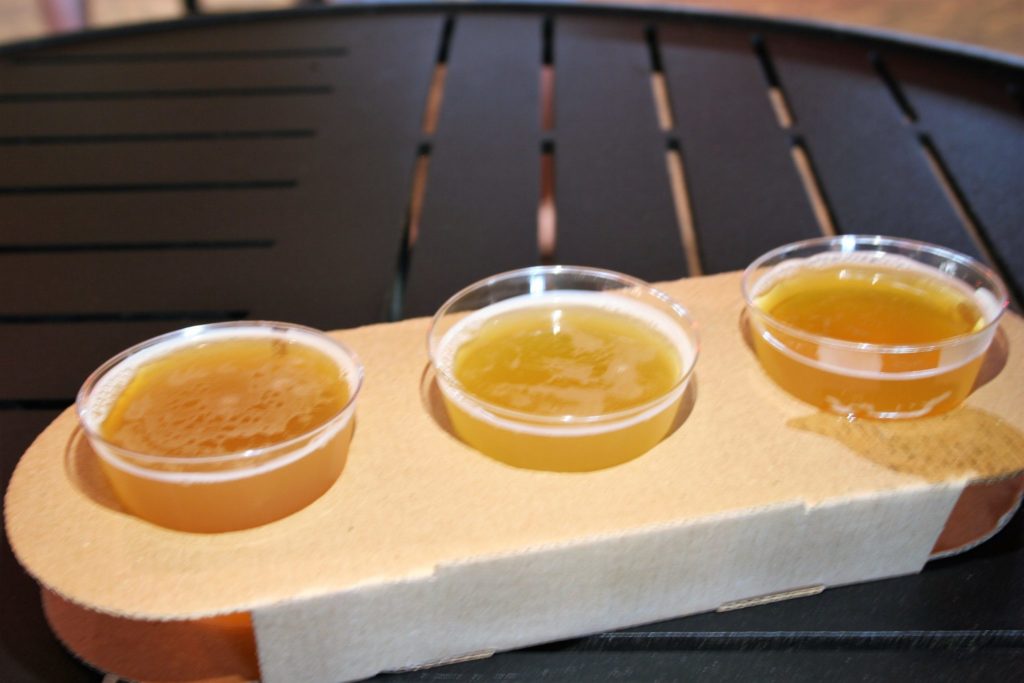 None of these jumped out at me as being a favorite beer, but I enjoyed all of them.  The Trekkerbier was my favorite – I have a special place in my heart for saisons.  I was really hoping the passion wheat would have more of a passion fruit flavor.  And while I’m not a huge fan of IPAs, this one was pretty good.

This is a new booth in Future World which is supposed to be spicy foods and barbecue.  They have 4 food items (wings, smoked corned beef, a sweet pancake, and a chocolate dessert) and 3 drinks (a Swine Brine which looks and sounds awful, a porter, and a zinfandel). 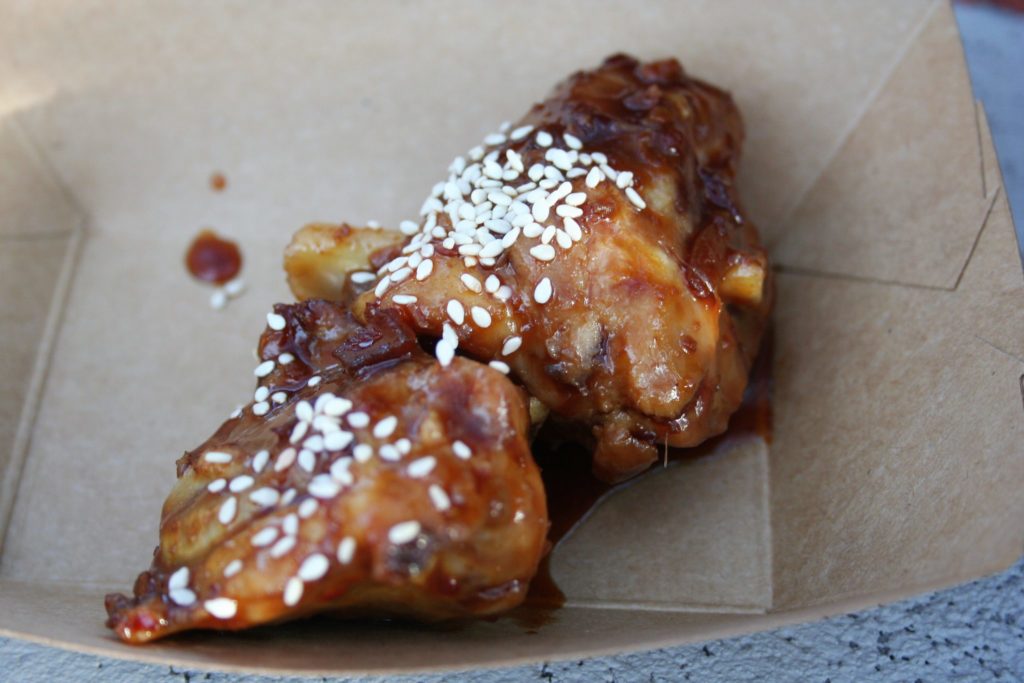 Jason likes wings so we decided to try the Piggy Wings: Roasted pork wings with Korean BBQ sauce and sesame seeds.  I was not impressed.  There were only two wings, and it seems like for the price three would be more fitting.  That aside, I took one bite and was good.  I didn’t think they had a ton of flavor and I was hoping for some spiciness, which they didn’t have at all.  Just okay.

This location is all beverages, some of which “glow” in the special room that they have it in.  The line to get in was long so we didn’t actually go into the glowing room, we just grabbed a beer from the outside kiosk.  I know, we were a little bit boring here.  They had beer flights but we just went with the Founders Brewing Company Green Zebra Watermelon Gose Ale. 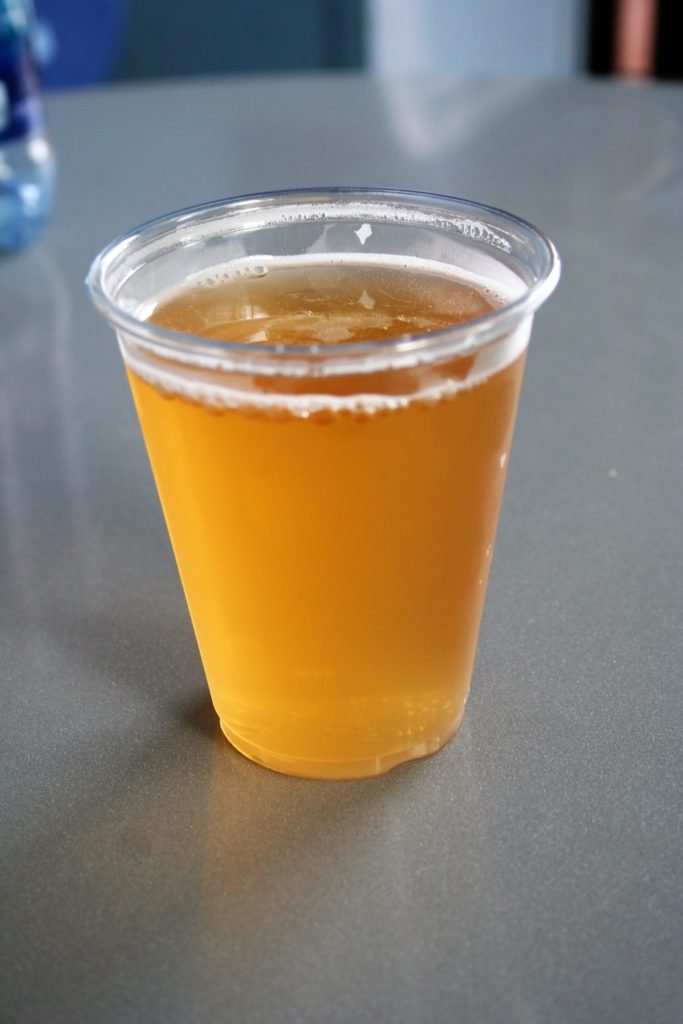 Both Jason and I liked this one a lot, which says something because Jason is not a big beer drinker.  He can’t stand anything with hops.  It tasted a bit like a sour ale, but the watermelon flavor sweetened it up a bit.  It was really refreshing so I would love to be able to get this one again.

This booth is “inspired by ABC’s The Chew,” and you’ll find a raviloi, grilled beef skewer, and peanut butter and white chocolate mousse.  For beverages there are two Kurt Russell wines and a black raspberry mead. 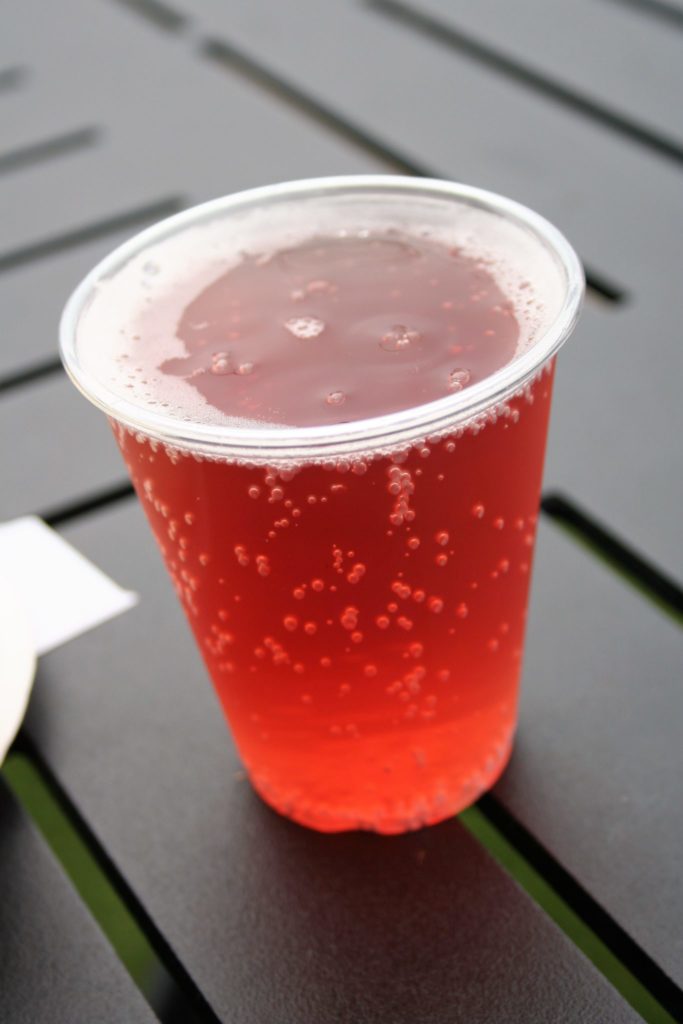 As none of the food items really appealed to us we went with the raspberry mead.  This was delicious!  It was the right balance of tangy and sweet, and very refreshing on these warm festival days.  And the color is gorgeous too.

I’m not sure what makes this booth “active,” but you can get a mac and cheese, salmon, or avocado crema.  There is a hard sparkling water and two wines here as well. 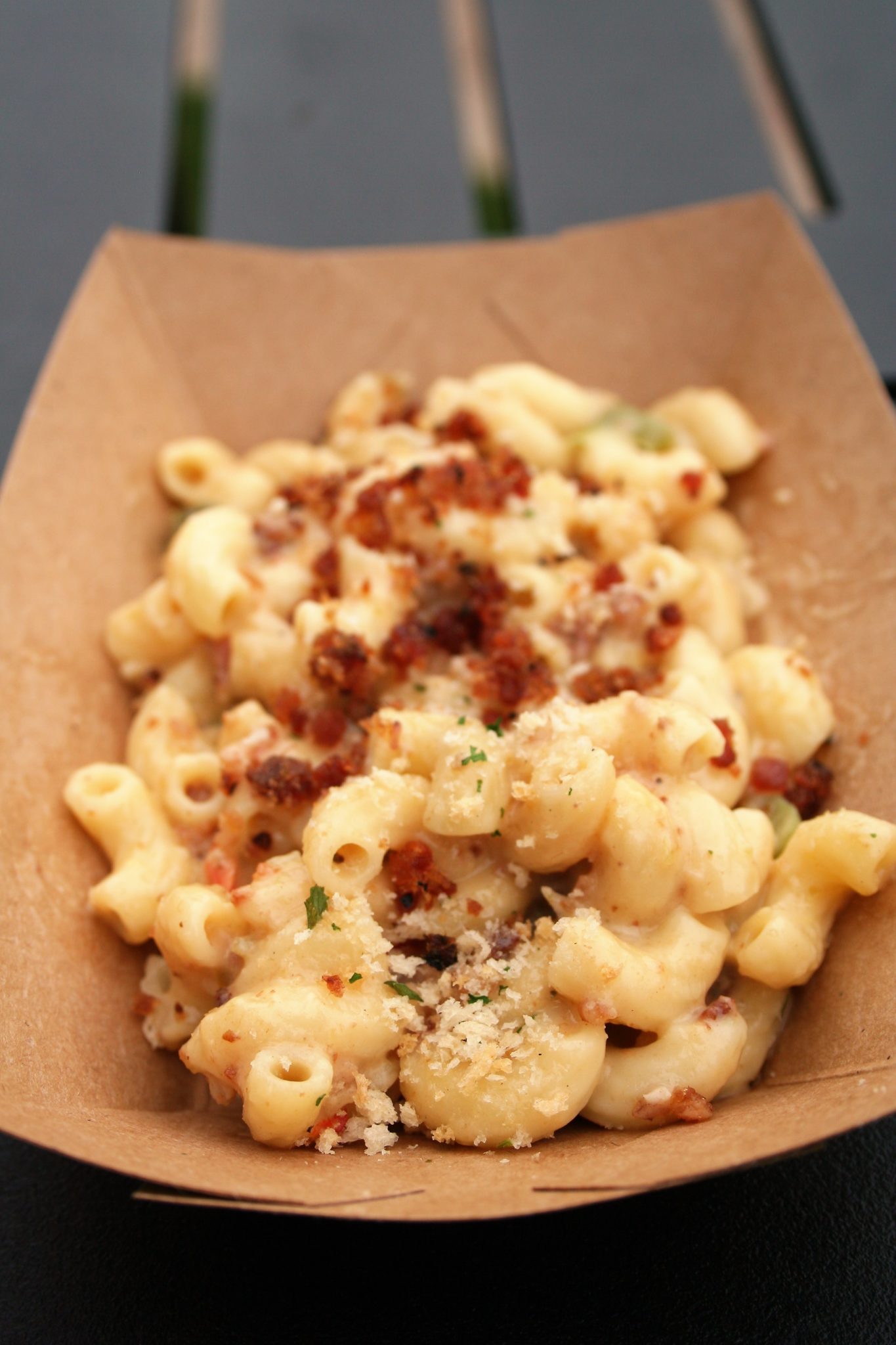 Two things at this booth were calling to me.  First up was the Loaded Mac n’ Cheese with Nueske’s Pepper Bacon, cheddar cheese, peppers, and green onions.  There are many things I am known for loving in this world (Disney mugs, for instance).  One of those things is mac n’ cheese.  Lots of people had talked about this mac n’ cheese so I had to try it.  And it was good!  But shockingly, I didn’t think there was enough cheese.  It was a bit spicy though, which I appreciated.  I will admit, I actually preferred the mac n’ cheese in the handwich at the Epcot Legacy Showplace. 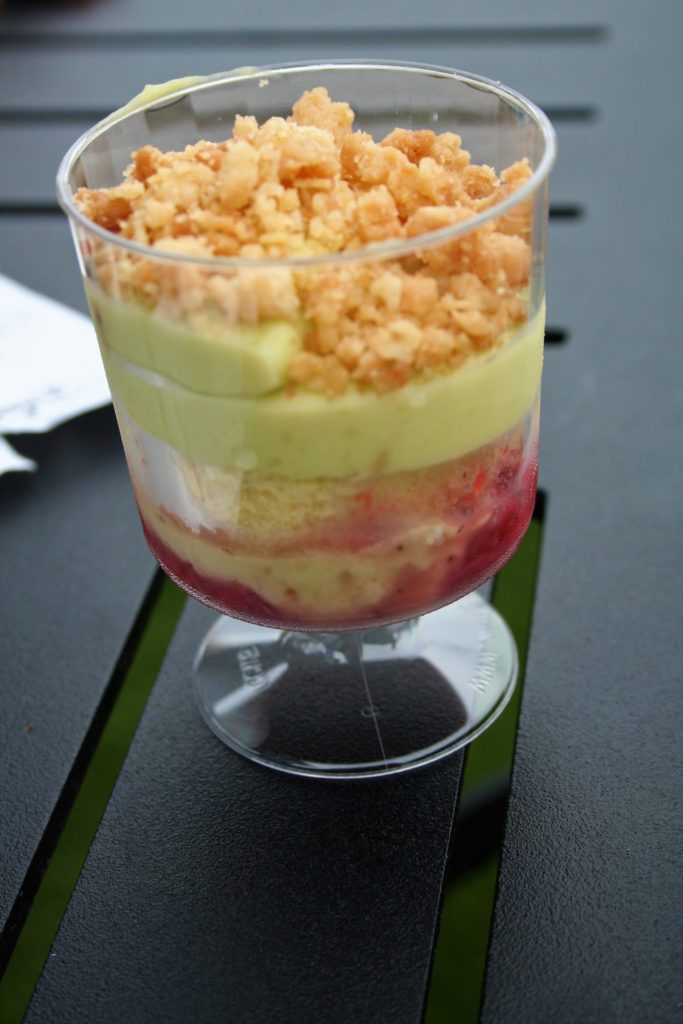 I also happen to love avocado, and I was excited to try the Sweet Avocado Crema with strawberries, yellow cake, and tortilla streusel.  I’ve seen debates on facebook about whether or not avocado should be in desserts.  The answer is YES.  This was another highlight of the festival for me.  Avocado goes perfectly with sweet dessert flavors like cake and strawberry.  Highly recommended.

Another booth I was very excited to try, as Jason and I both love seafood.  They have a crab cake, shrimp scampi dip, and seared scallops, as well as two wines. 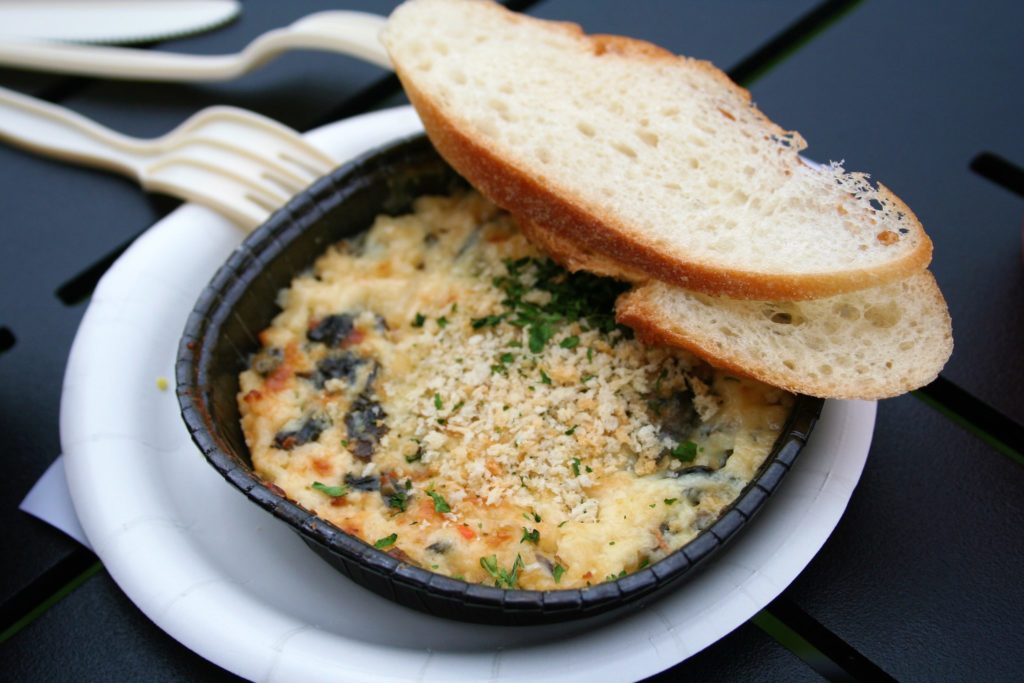 The Baked Shrimp Scampi Dip with sourdough baguette was very tasty.  It didn’t seem like there was a ton of shrimp in our dish, but there was lots of buttery, cheesy, scampi flavor.  We both really enjoyed this. 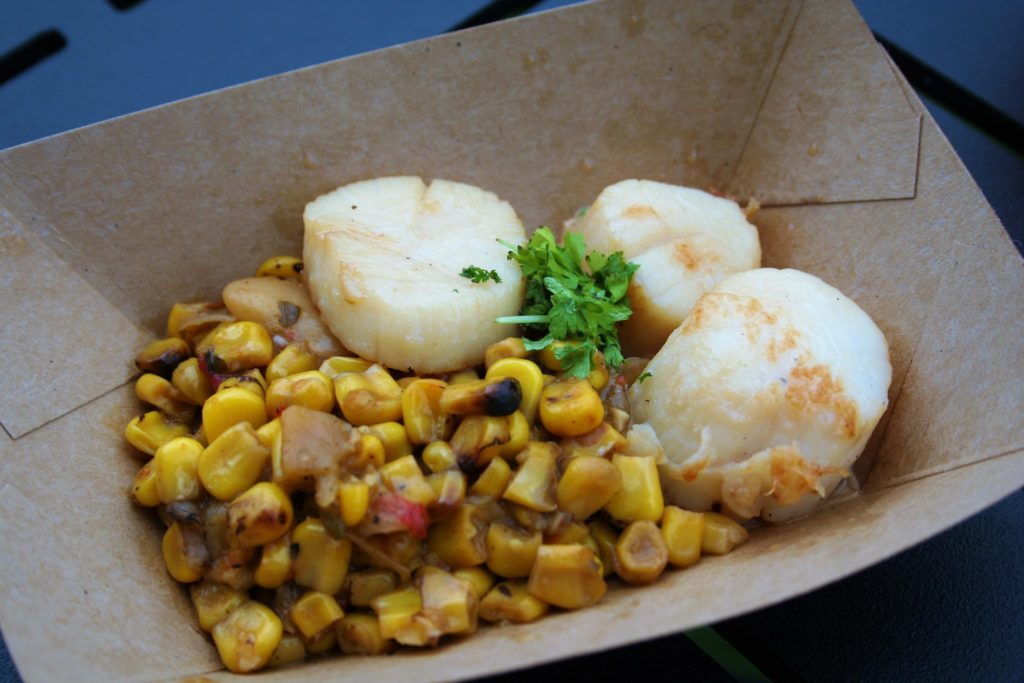 Two chocolate dessert are here (you’d think they’d have one or two more options at the chocolate studio!) including a chocolate-almond truffle and a chocolate raspberry torte.  You can also get several different wines here, including the popular Rosa Regale. 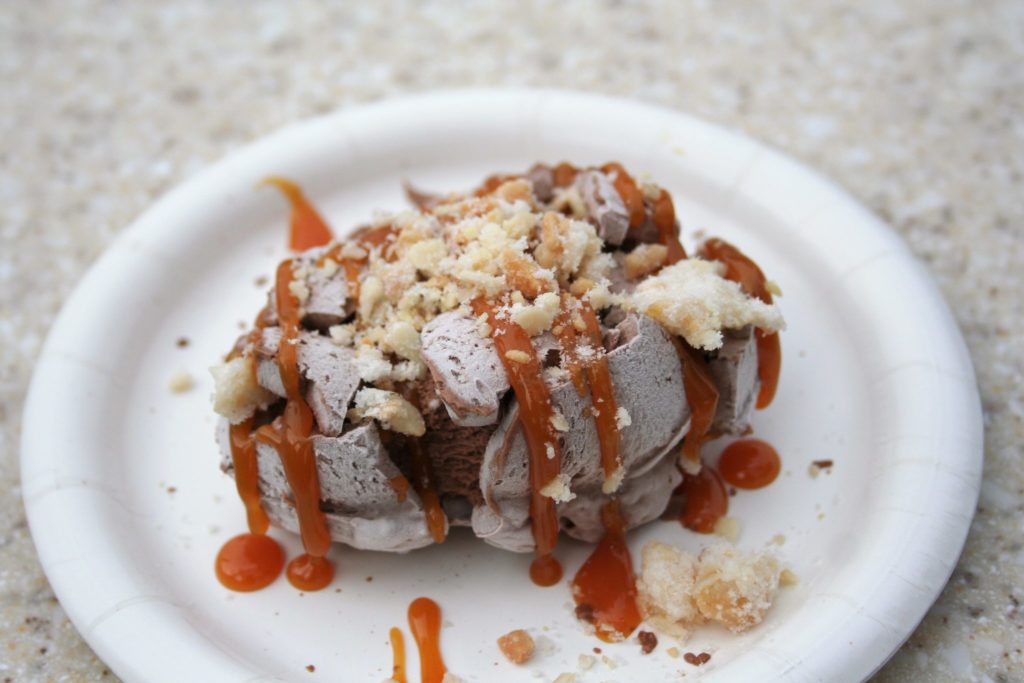 We went with the Liquid Nitro Chocolate-Almond Truffle with warm whiskey caramel.  This is a pretty cool and unique dessert.  They dip the truffle into liquid nitrogen, and then break it open with a hammer to get into into pieces you can eat.  It’s a very chocolate-y dessert, and probably would have been too much to eat on my own.  It definitely seemed shareable to me, but I loved the unique flavors.

This booth is sponsored by Boursin cheese, so all of the items in it use Boursin.  There’s a beef stroganoff, a carmelized onion and cheese tart, and a cheese trio, as well as two wines available. 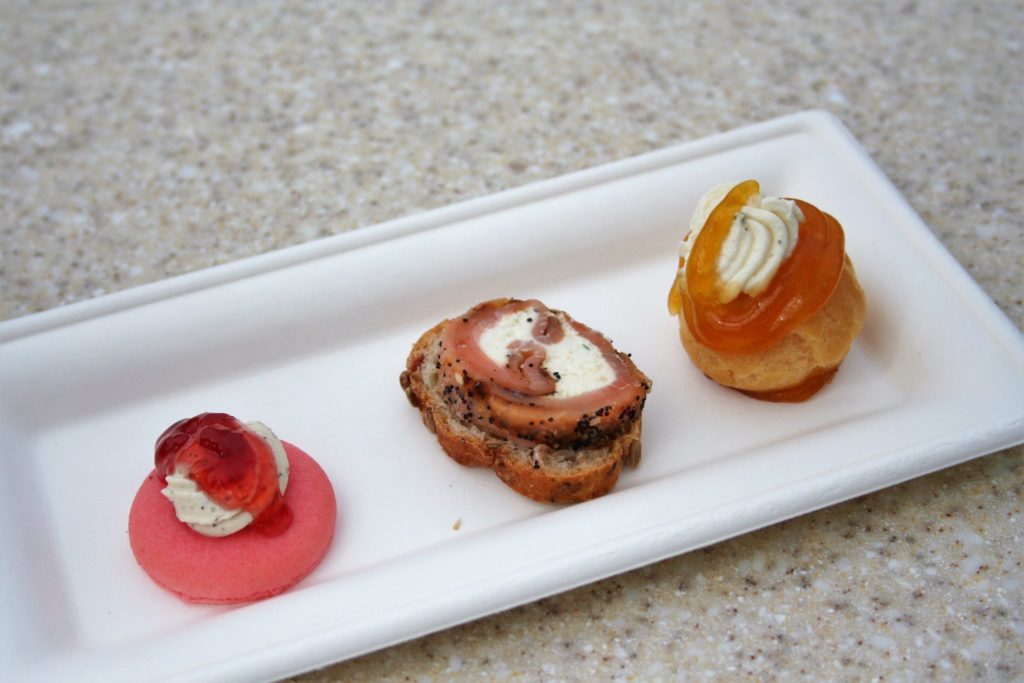 We decided to try the Cheese Trio: profiterole topped with boursin garlic and fine herbs cheese and orange-apricot jam, smoked salmon pinwheel with boursin shallot and chive cheese and everything seasoning, and a strawberry macaron with boursin pepper cheese.  I don’t know what to say about this dish except that it definitely felt weird.  After having this trio I’ve come to the conclusion that I don’t think I like Boursin cheese!  The profiterole was probably the best of the bunch – the garlic and herbs cheese was pretty good and I really liked it paired with the sweetness of the orange-apricot jam.  I’m not  huge smoked salmon fan so I took one small bite and left that to Jason – he seemed to enjoy it.  The strawberry maracon with pepper cheese just seemed like really odd flavors put together.  I was not a fan of that one.

The Wine and Dine Studio

With the focus being on wine, they offer 5 different kinds here: a sauvignon blanc, chardonnay, malbec, red blend, and rose.  There are also some food items to pair with it, including scallops, pulled duck confit, and at trio of cheeses. 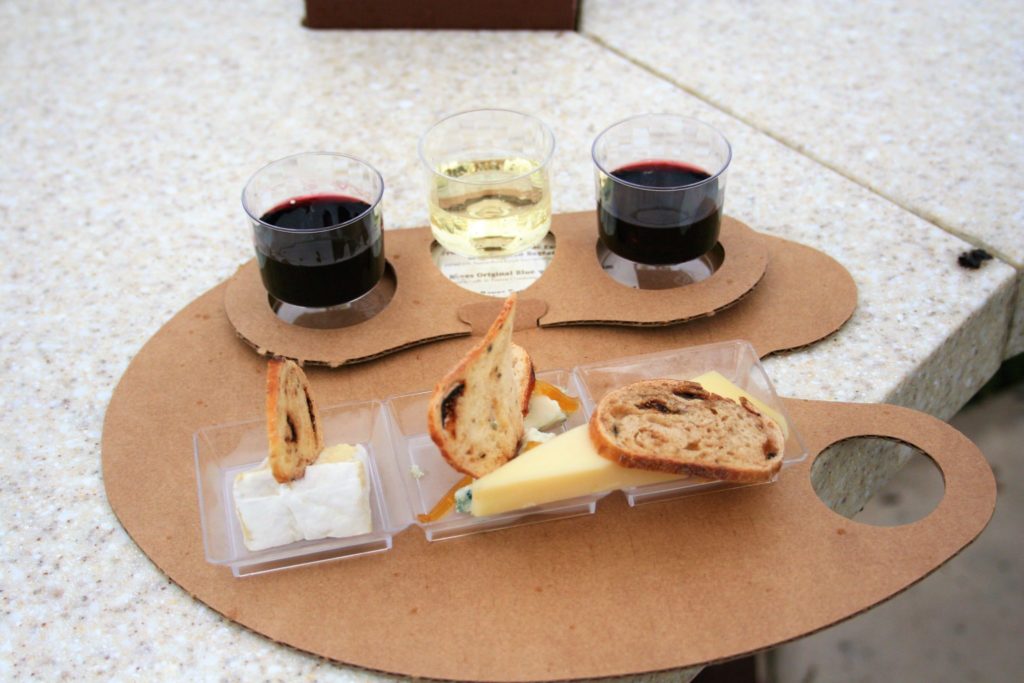 You can also opt to get the “Artist Palette of Wine and Cheese,” which includes the trio of cheeses paired with 3 sample sizes of wines.  The cheeses includes Fromager d’Affinois de Excellence with Toasted Baguette, Point Reyes Original Blue with Apricot Jam, and Point Reyes Toma with Honey.  The wines paired with them are the Round Pond Estate Sauvignon Blanc (which they were out of when we ordered it, so they replaced with the Eden Canyon “Jolie” Red Blend), St. Francis Chardonnay, and Recuerdo Malbec.

We enjoyed all of the cheeses and the wines.  The Fromager was not my favorite, but Jason really enjoyed it.  I actually liked the blue cheese best, especially paired with the sweet apricot jam.  The Point Reyes Toma was a little bland on its own, but the honey added some good flavor.  And while they were all good, none of the wines really stood out, though I did enjoy the chardonnay (and I’m not usually a fan of chardonnays).

And that’s only 10 booths of the 40 we visited at the Festival!  Stay tuned for the rest of the fun coming up on the blog this week and next:

Which items sound best to you at this year’s Epcot International Food and Wine Festival?