Jason and I usually try to visit one signature restaurant every trip we take to Disney as a special treat to ourselves.  On this past trip we visited two, but on our actual anniversary we had a reservation at Flying Fish.  We were staying at the Boardwalk resort and love seafood, so it seemed like an obvious choice. 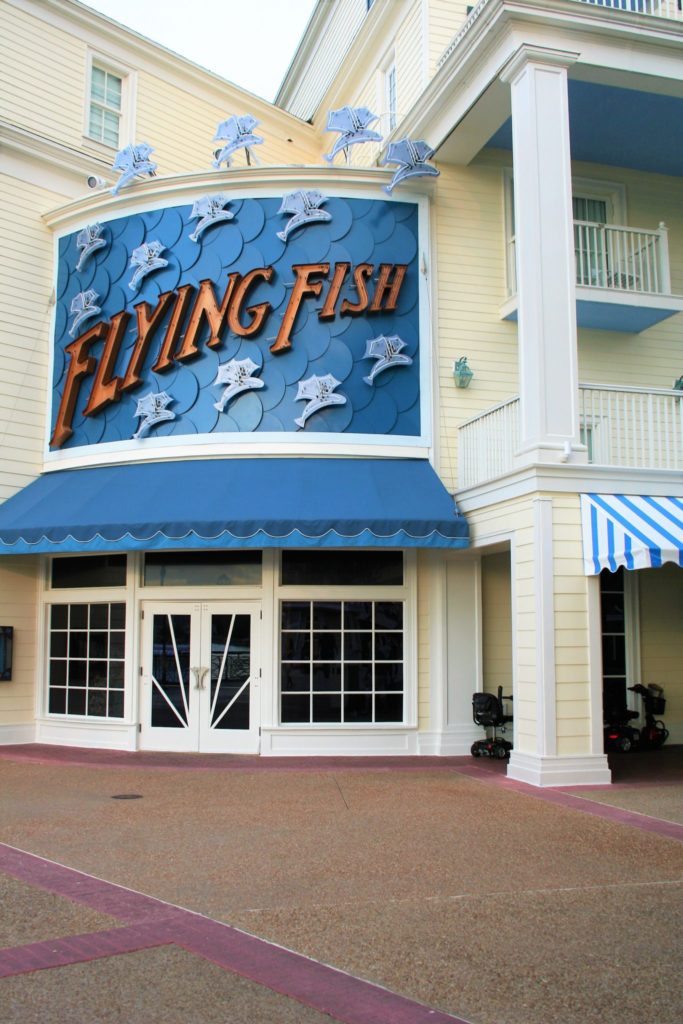 Flying Fish recently got a major remodel and a totally revamped menu.  I know a lot of people felt like the previous menu was much better, but Jason and I never ate there before so we didn’t have anything to compare it to. Which was nice, because we were coming in with a fresh perspective.

The dining area looks quite beautiful and fitting of a signature restaurant while still having some fun Disney touches, like the elegant fish decor hanging from the ceiling.  Our server was extremely knowledgeable and friendly, and happy to make recommendations.  He brought us some free champagne to start our meal since we were wearing our anniversary buttons.

We also started the meal with bread.  They bring a bread with seaweed baked into it and salted butter.  I love that they even tie the seafood into the bread.  The seaweed didn’t have a super strong taste but you could definitely notice it.  I enjoyed it, and salted butter is always great. 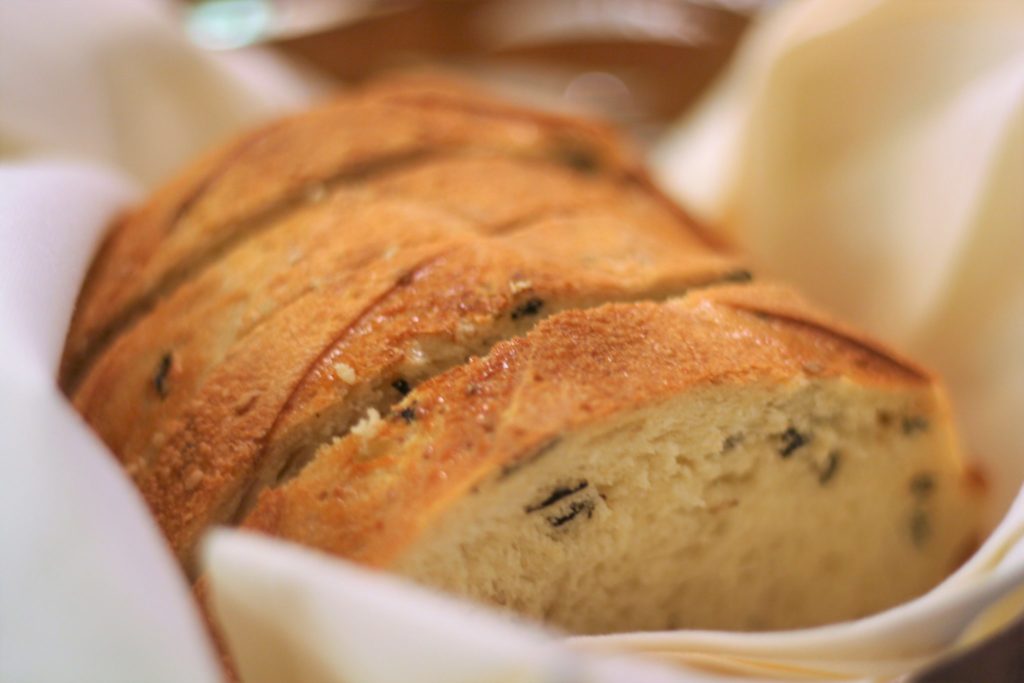 Jason and I also each had a specialty alcoholic beverage in addition to the champagne.  He had a Harvest Mule (Tito’s Vodka, Fever Tree Ginger Beer, Pear Nectar, fresh Lime Juice). 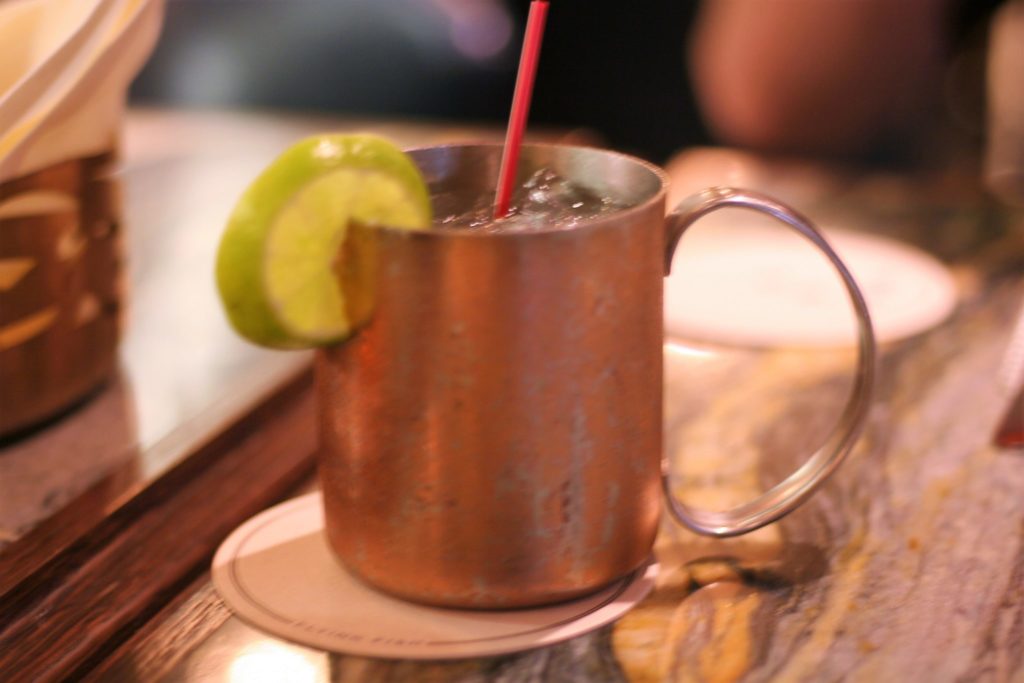 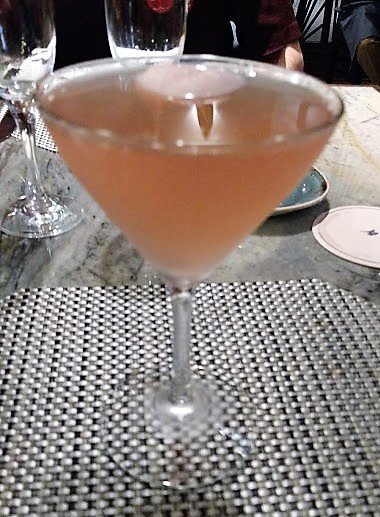 I really enjoyed this.  I’m a huge grapefruit fan so anything with grapefruit flavor I’m bound to love.  It was nice and tart, but the lychee sweetened things up a little bit to create the perfect balance.  the sorbet floater on top was fun and tasted good too.

Since it was our anniversary dinner we decided to go all out and each get an appetizer, entree, and dessert.  For his dessert Jason chose the Canadian Blue Mussels (Basil, Fregola Sardo, Baked Croissant) on the recommendation of our server. 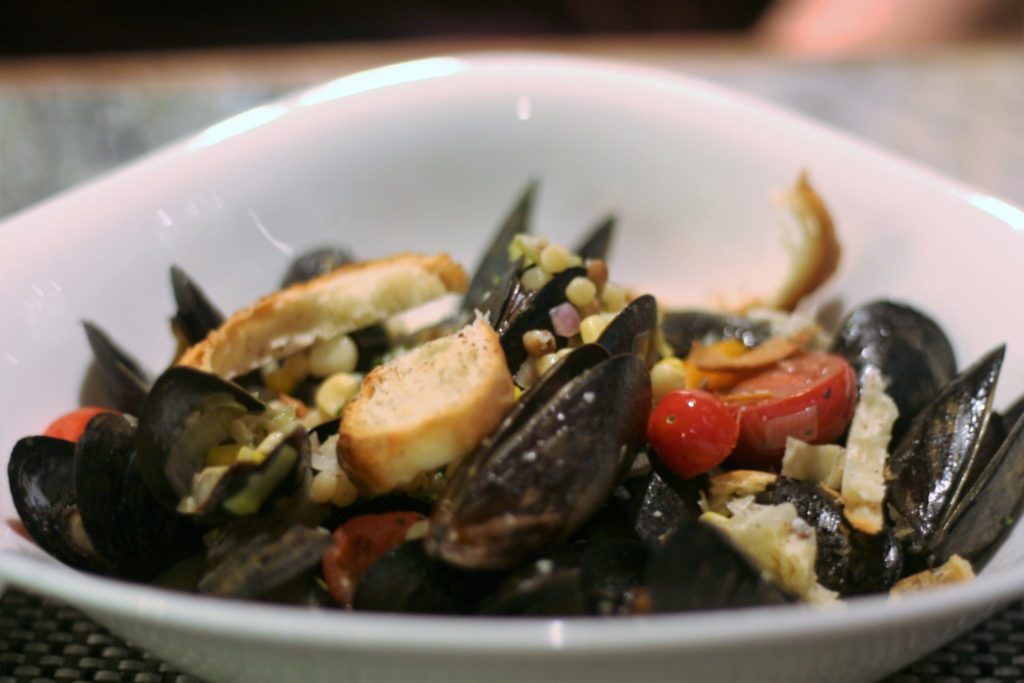 He found the mussels to be really good and was glad he went with the recommendation.  Whatever sort of flavoring they used on them he liked a lot.  It was also a pretty big portion.  Most signature restaurants have very small appetizers that only work for one person, but this is one you could probably share.

While it might feel a little more ordinary, I went with the Mile Zero Shrimp Cocktail (Horseradish Aïoli, Elderflower Mignonette). 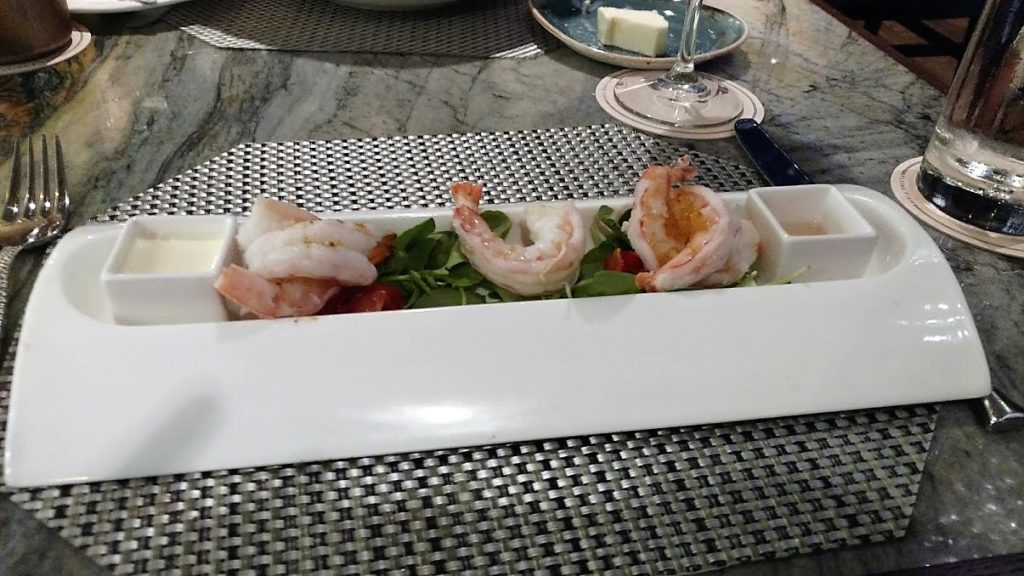 The shrimp were large and juicy, but it was really the dipping sauces that were delicious.  I thought I would enjoy the elderflower more, but it was the horseradish that won me over.  It had just the right amount of kick to it and was probably the best horseradish sauce I’ve ever had.  Much better than just being served typical cocktail sauce.  The menu now lists this also being served with a blood orange oil, which sounds amazing. 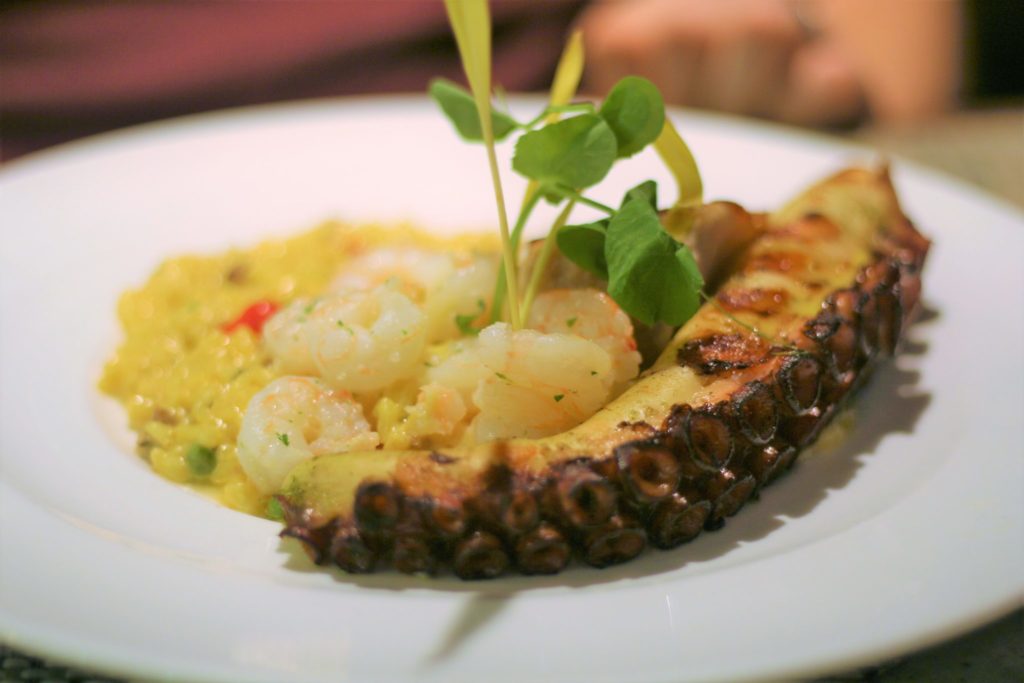 Jason was a big fan, but mentioned it would be best for adventurous eaters because the octopus is literally a big tentacle.  It’s hard to find octopus done well, but he said this was tender and satisfyingly meaty to chew.  He would have been happy with just that as the protein of the dish, but it was also accompanied by shrimp and cobia.  The shrimp were very good, while the cobia was fine but the weakest link on the plate.  It was a lot of food and he struggled to finish it.

For my main course I had been looking forward to the lobster pasta dish – only to find that they had replace it with scallops.  While I was hoping for lobster, I was absolutely okay with this because I also enjoy scallops and it was $17 less than what it had previously been.  I ordered the Hokkaido Scallop Nero Pasta (Savory Tomato Sauce, Artichokes, Braised Fennel). 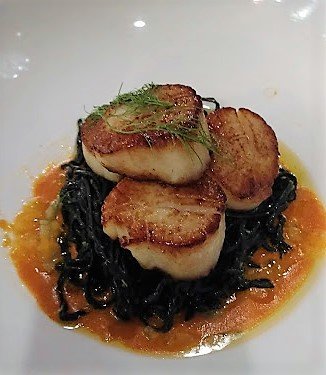 It was really excellent.  The scallops were well cooked, but it was all of the flavors together that were really the highlight of the dish for me.  I don’t know how big of a taste difference the pasta nero actually has to regular pasta, but it tasted fantastic to me.  The sauce was different and so good, I couldn’t get enough of it. 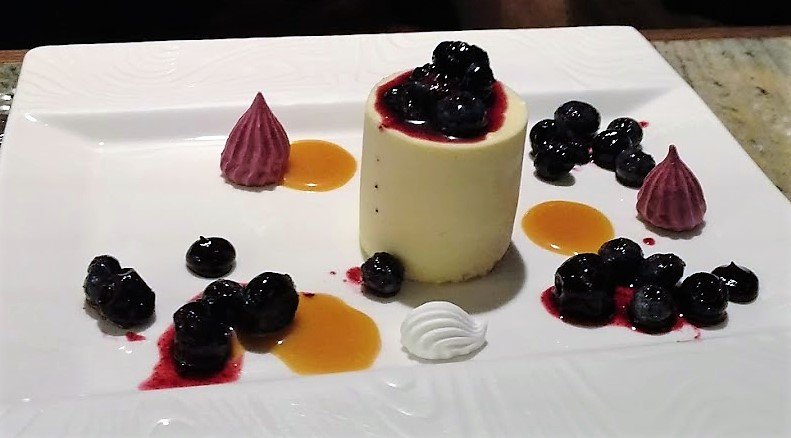 He found this dessert to be delicious.  The menu description sounds a bit odd, but it’s actually just a cheesecake.  So if you like blueberry, lime, and cheesecake, it’s recommended. 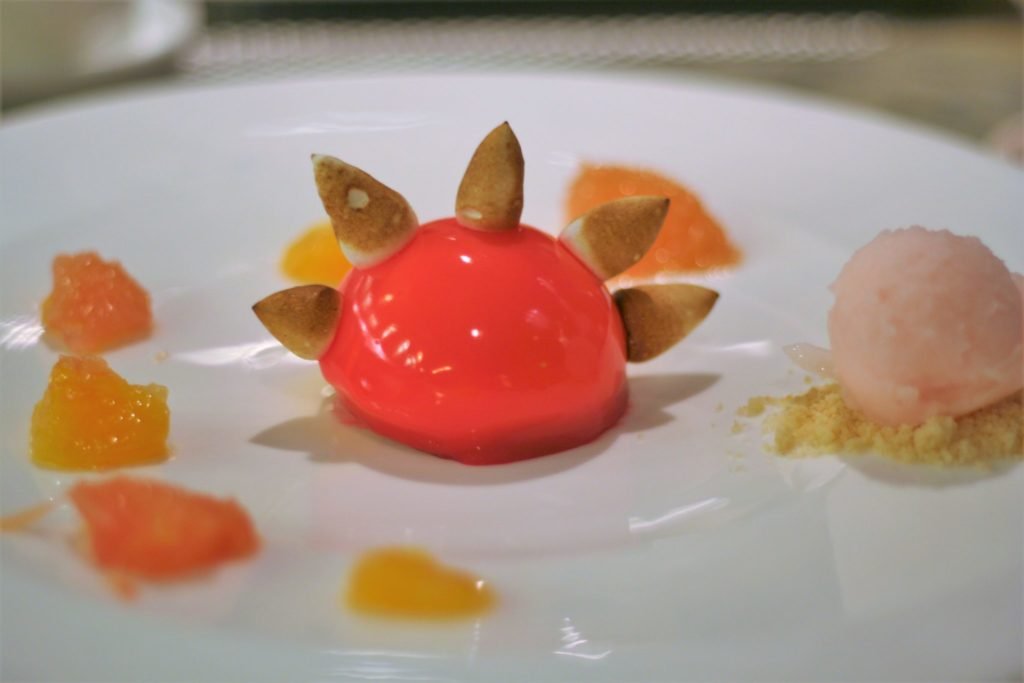 Remember how I said I love grapefruit?  Yup, it should come as no surprise that I ordered this dessert.  I absolutely loved everything on the plate.  After a big dinner something lighter was a nice option.  I liked that it had fresh fruit too, and the sorbet was delicious.  It looks more like some sort of weird dinosaur than a reef, but it tasted awesome.

So is Flying Fish worth it for seafood lovers?  I’d say yes.  The food we had was all delicious, and there’s a nice variety (in terms of different types of seafood).  I don’t know if it would be worth it if you’re not a fan of fish, but if you’re in a group who loves the sea they do have non-fish options on the menu.  It’s not a place we can go to often because of the price, but I’d definitely be back on a future special occasion!

Would you want to eat at Flying Fish Cafe?  What sounds good to you?